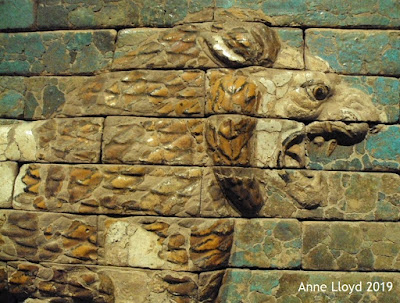 A Wonder to Behold:

Craftsmanship and the Creation of Babylon’s Ishtar Gate

The recently-opened exhibition at the Institute for the Study of the Ancient World (ISAW) in New York City is aptly named: "A Wonder to Behold."

A Wonder to Behold investigates the building of the Ishtar Gate, one of antiquity's greatest architectural and artistic triumphs. The Ishtar Gate was the jewel in the crown of King Nebuchadnezzar II (r.604–562 BC) of Babylon.

The ISAW exhibition is curated by Dr. Clare Fitzgerald, Associate Director of Exhibitions at ISAW, Anastasia Amrhein, an art historian from the University of Pennsylvania and Elizabeth Knott, PhD, an historian specializing in the ancient Middle East from NYU.

The Ishtar Gate's "rebuilding" is also part of the story which the ISAW exhibition tells. Following the excavation of the Ishtar Gate by a team of German archaeologists led by Robert Koldewey, from 1899 to 1917, what amounted to solving the greatest "jigsaw" puzzle in history occurred.

Eight hundred cases of fragments of Nebuchadnezzar's imposing gateway were sent to Germany to be sorted and studied. In a wonderful opening display, the ISAW curators evoked the shipment of the brick shards from Babylon to Berlin over a century ago. One of the original wooden cases, filled with battered pieces from the Ishtar Gate, is front and center in ISAW's lobby. 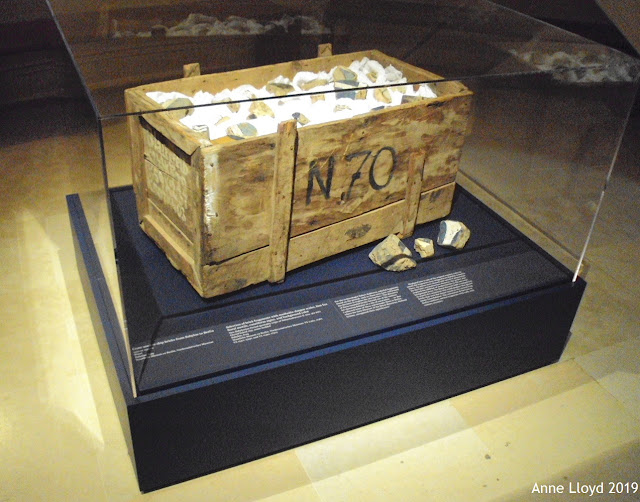 Anne Lloyd, Photo (2019) Gallery view of the ISAW Exhibition, A Wonder to Behold, showing an original wooden case from the excavation of the Ishtar Gate

With vibrant glaze colors still clinging to many of the fragments, the possibility arose of reuniting at least some of the remnants of the Ishtar Gate. A mind-numbing task, it involved identifying and matching the bits and pieces composing the sacred animals on the walls of the Ishtar Gate complex. 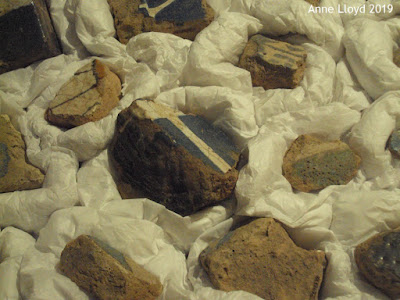 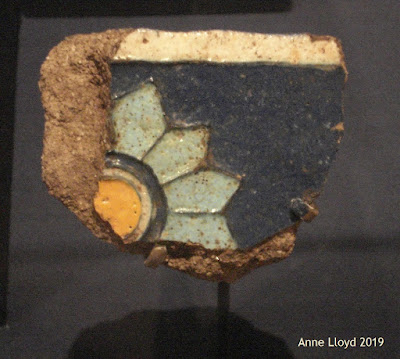 Amazingly, enough of the fragments were pieced together so that a reconstructed version  of the Ishtar Gate could be exhibited. Additional blue bricks were created by German artists to fill in the spaces between the reassembled ancient art works. Opened in 1930 in the Vorderasiatisches Collection of Berlin's Pergamon Museum, this slightly smaller version of the original is one of the most impressive museum exhibits in the world. 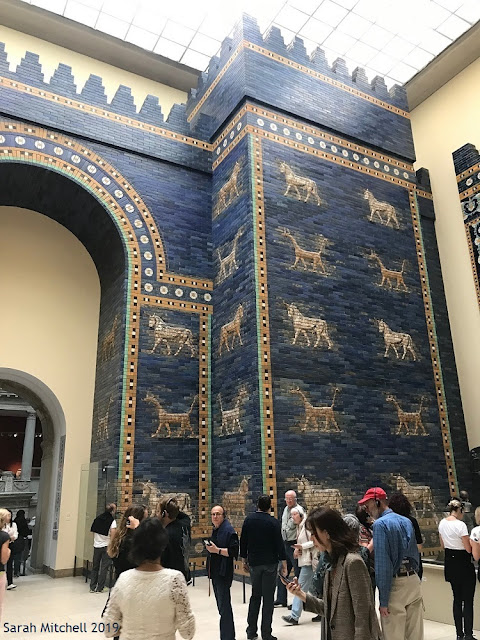 Sarah Mitchell, Photo (2019)
The Ishtar Gate, reconstructed at the Pergamon Museum in Berlin

My friend, Sarah Mitchell, recently visited the Pergamon Museum. Sarah generously shared her photos of the Ishtar Gate, enabling me - vicariously - to get some idea of what it must have been like two thousand five hundred years ago to view the magnificent portal in the days of its glory.

No less impressively, the ISAW, with only two modestly-sized exhibition galleries at its disposal, chronicles the building and "rebuilding" of the Ishtar Gate in fascinating detail. 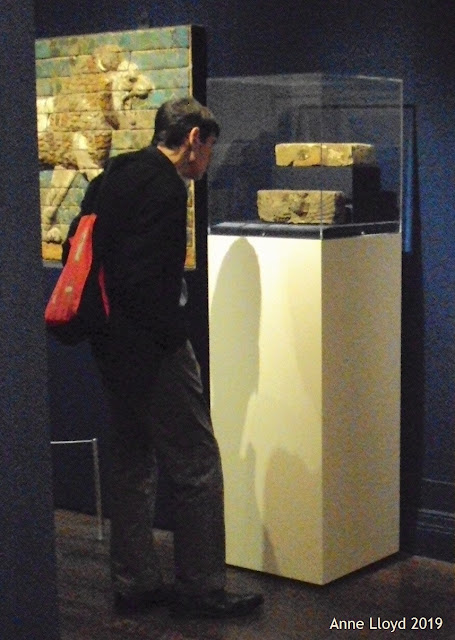 Anne Lloyd, Photo (2019) Gallery view of the ISAW Exhibition,
A Wonder to Behold, Craftsmanship and the Creation of Babylon’s Ishtar Gate


Covered in sparkling glazed bricks, embellished with rows of striding lions, bulls and dragons in molded relief, the Ishtar Gate proclaimed the might of the Neo-Babylonian Empire of Nebuchadnezzar II. The "new" Babylon represented the culmination and climax of ancient Mesopotamia. For a brief, shining moment, Nebuchadnezzar II surveyed his far-flung realm from the battlements atop the Ishtar Gate in Babylon.

Power politics certainly played a major role in motivating the massive funding and enormous effort in constructing Babylon's Ishtar Gate. Pomp and glory, however, are not the themes of the ISAW exhibit. Rather, a seemingly lackluster term is key: materiality.

To grasp the meaning of materiality, one needs to understand the tools and natural resources which the Babylonians used. From making mud bricks to recipes for special glazes to color the bricks, the Babylonians drew on expertise dating back to remote antiquity. The practical skill of brick layers, craftsmen and architects was complemented by the "know-how" of an elite group of expert scholars called ummânū.

Some of the Ishtar Gate bricks were found stamped with inscriptions. These hallmarks likely testify to the contributions of individual workers or supervisors. 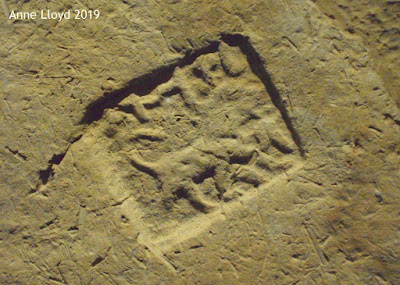 The knowledge and skills used to create the Ishtar Gate reflected the latest technology of the Babylonians but more importantly were founded on centuries of innovation and transmission from the city-states and kingdoms which preceded Nebuchadnezzar's empire.

A major focus of the exhibition curators is to gain insight into these construction techniques. What may be termed as "experimental" archaeology can be seen below in the model of a brick mold used to create the incredible dragons  of the Ishtar Gate. 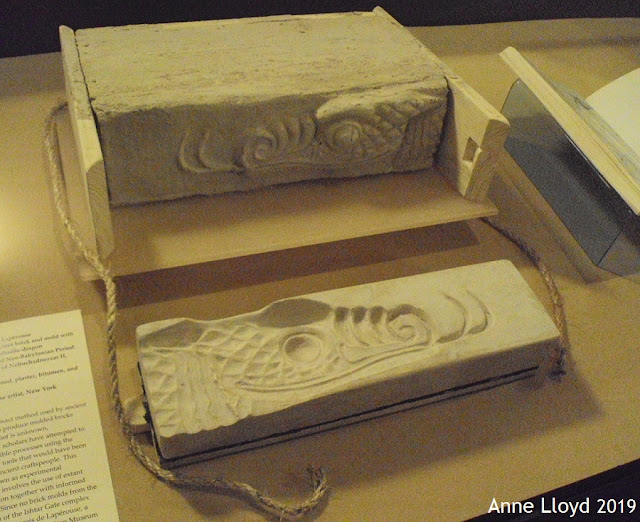 Anne Lloyd, Photo (2019)
Gallery view of the A Wonder to Behold exhibition, showing a reconstructed

brick mold used to create the head of a mušhuššu-dragon


Since the design of the dragon - a mušhuššu-dragon, to be exact - was repeated, it made sense to create a technique allowing duplication for the individual heads, necks, legs, etc. of these fabulous beasts.

Among the more curious objects on display in the ISAW exhibit is brick stamped with the inscription of Nebuchadnezzar. While drying, the brick received a visit from a wandering animal not included in the select company of lions, dragons and bulls. A dog's paw print can be seen directly on the royal title of Nebuchadnezzar II. 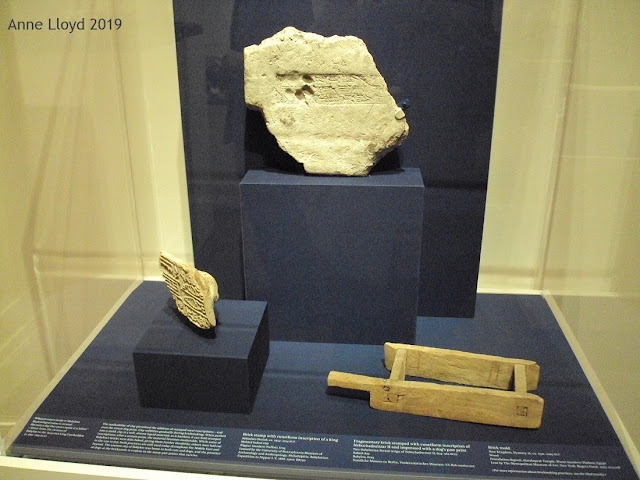 The Ishtar Gate was one of the gates to the inner city of Babylon. The all-important New Year procession - held in the Spring - passed through the gate.The Babylonians had not only Nebuchadnezzar II to please, but also a formidable deity as well: Ishtar. Goddess of Love and War, Ishtar was a goddess to be reckoned with.

There are other reasons for focusing attention on materiality in reference to the Ishtar Gate.

First, the historical record, rich in details on some aspects of the empire of Nebuchadnezzar II, is a blank slate when it comes to the Ishtar Gate. Herodotus, the "Father" of History, wrote about Babylon during the fifth century B.C. but without a single reference to the Ishtar Gate.

Even more frustrating, the fabled list of the Seven "Wonders" of the World mentioned by Greek historians living in the first century B.C., Diodorous Siculus and Antipater of Sidon, are silent as well about the Ishtar Gate. Diodorus commented upon the "hanging gardens" of Babylon, while Antipater listed Babylon's walls as a "wonder" of the world. No evidence of "hanging gardens" of Babylon has ever been found. Claims that Babylon's walls were wide enough to drive a chariot team along them are almost certainly exaggerated. 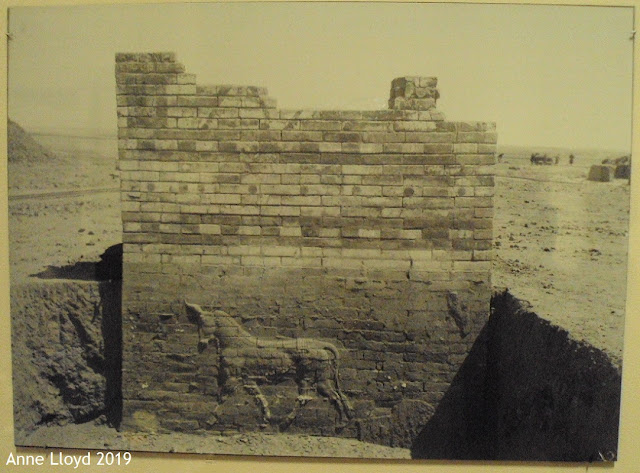 found in situ during the German excavations at Babylon

Digging down into the foundations of Babylon's walls, the German archaeologists made the sensational discovery that the Babylonians had not stopped at ground level in decorating the Ishtar Gate. Below the surface were surviving reliefs of lions, bulls and dragons, made of molded brick. Unlike those above ground, these were not covered with vibrant color glazes, but they did supply essential evidence for the reconstruction project in Berlin.

Moreover, these subterranean wall reliefs, which still can be see in Iraq today, proved beyond doubt that the Ishtar Gate was truly a "wonder to behold."

Once the mystery of the Ishtar Gate's place among the Seven Wonders of the World was resolved, another immediately took its place. What happened to the gleaming blue and gold Ishtar Gate? 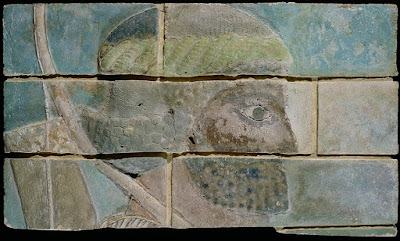 Unknown Artist, Brick with the head of a Persian archer, ca. 510 B.C, from the Louvre

Less than four decades after the Ishtar Gate was completed, Cyrus the Great of Persia conquered Babylon in 539 B.C. The Persians, though outsiders to Mesopotamia, had integrated many features of the region's cultures. They were notably tolerant of other religions, so the Ishtar Gate was not likely destroyed by the "fire and sword" of Cyrus and his armies.

A likely explanation for the "mystery" of Babylon's walls is that the high-quality baked bricks were re-used by local populations during the centuries after the city was abandoned.

Thanks to the dedication and skill of the German archaeologists and Vorderasiatisches Collection staff, many of the Babylonian lions, bulls and dragons from the Ishtar Gate are prowling around once again - and not just at the Pergamon Museum. 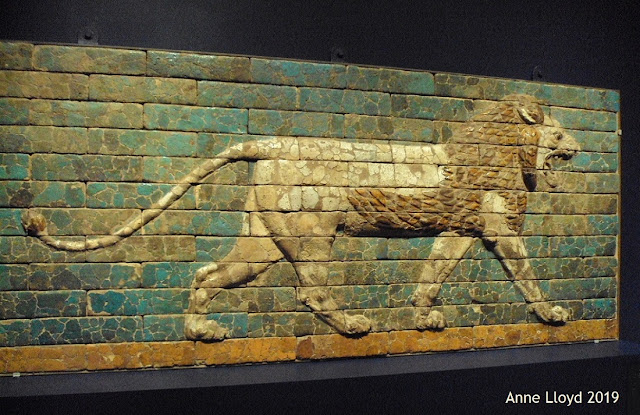 Anne Lloyd, Photo (2019)
Gallery view of the A Wonder to Behold exhibition, showing one of the reconstructed Ishtar Gate lions owned by the Metropolitan Museum of Art

A number of the pieced-together Ishtar Gate masterpieces were sold to other museums. The Metropolitan Museum owns two Ishtar lions, one of which they graciously loaned to ISAW for the exhibition. It did not have to travel far as ISAW is only a couple blocks away from the Met in New York City.

The Ny Carlsberg Glyptotek in Copenhagen owns a full set, lion, dragon and bull (actually an auroch, a wild ancestor of domesticated bulls, now extinct). Scholars at the Ny Carlsberg are among the leaders in studying polychromy, the use of color on ancient statues and monuments. They have determined that the lustrous blue color of the walls of the Ishtar Gate was produced by a glaze recipe composed of a mixture of cobalt and copper. This was intended to replicate lapis lazuli, the precious gemstone from Afghanistan which was used on royal regalia throughout the ancient world.

Glaze recipes account for the color variations on the bricks used throughout the Ishtar Gate complex. The mixing and application of the glazes was likely involved the supervision of  of the ummânū. 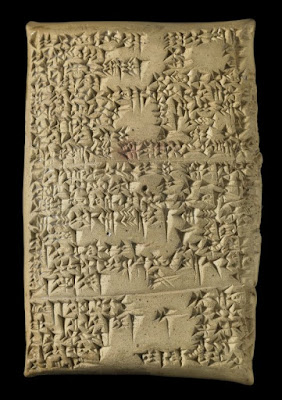 On display is a cuneiform tablet with a recipe for making red glass - and thus applicable to glazing making. The "red" recipe dates to nearly a thousand years before the Ishtar Gate.

No doubt the ability to create colorful and durable glazes must have seemed like a form of magic. It would not be an exaggeration to compare the ummânū to the alchemists of the Renaissance period who prepared the way for the Scientific Revolution of the 1600's.

If the Ishtar Gate was a "wonder" to behold, then so is the ISAW exhibition. 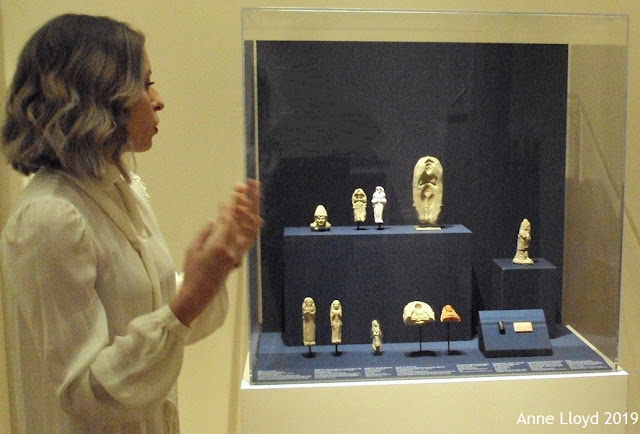 While some of the displays at ISAW are traveling exhibits from other museums, most are "home team" efforts.  Like last spring's spectacular Hymn to Apollo:  Ballet Russes and Antiquity, the Ishtar Gate exhibit is one that everyone at ISAW can be proud. And it will be one that I will particularly remember - because of a serendipitous event at the press preview.

A Q&A was part the "presser," held in the second floor meeting room. ISAW has an  impressive spiral staircase. As Anne and I descended the stairs, Anne suddenly stopped and took an incredible photo of the Vorderasiatisches Collection crate below. 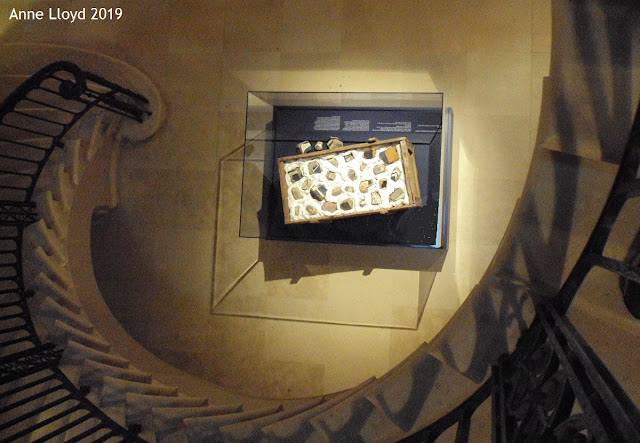 Anne Lloyd, Photo (2019) Gallery view of the ISAW lobby,
showing an original wooden case from the excavation of the Ishtar Gate

Walking down the stairs took on new meaning. We were replicating the work of archaeologists and curators, reaching down into the past, stepping through the strata of centuries and epochs.

And what did we discover? Crumbled debris of a fallen empire? No, these are "wonderful things," each bearing the finger prints of human beings like people today and across time.

The Vorderasiatisches Collection crate placed next to the ISAW staircase contains nothing less than a portion of the precious inheritance of all humankind.

Anne Lloyd, Photo (2019) Photo of a brick fragments from the Ishtar Gate, ca. 602-562 B.C., sent to the Vorderasiatisches Collection in Berlin.


Anne Lloyd, Photo (2019) Gallery view of the A Wonder to Behold exhibition at the  Institute for the Study of the Ancient World, New York City

Anne Lloyd, Photo (2019)   Copy of a 1902 photo showing part of the Ishtar Gate wall found in situ during the German excavations at Babylon.


Gallery view of the A Wonder to Behold exhibition, showing one of the reconstructed Ishtar Gate lions owned by the Metropolitan Museum of Art

Anne Lloyd, Photo (2019) Gallery view of the ISAW lobby, showing an original wooden case from the excavation of the Ishtar Gate.
Posted by Art Eyewitness at 5:57 AM

Email ThisBlogThis!Share to TwitterShare to FacebookShare to Pinterest
Labels: Ancient Near East, Babylon, Institute for the Study of the Ancient World, Ishtar Gate, Mesopotamia, Nebuchadnezzar II