Bonnard to Vuillard: Art of the Nabis at the Phillips Collection 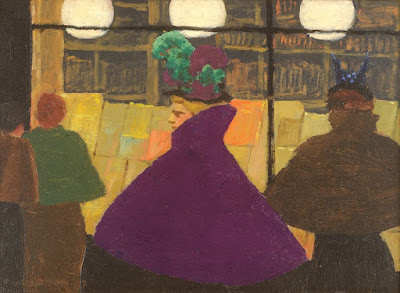 Bonnard to Vuillard: the Intimate Poetry of Everyday Life

The Nabi Collection of Vicki and Roger Sant

The band of young French artists from the 1890's known as "Les Nabis" enjoy the unique distinction of having a group name which was not based on a derogatory remark by an art critic. Nor it originate in an over-intellectualized definition. "Nabis" means "Prophets" and it was a very appropriate name.

The subject matter of the Nabis seems very much in keeping with that of Manet and the Impressionists. They too focused on the"heroism of modern life" and were enthralled with the unusual angles and cropping effects of Japanese prints.

Unlike Manet, however, Bonnard, Vuillard and the other Nabis relinquished any lingering attachment to the École des Beaux Arts and the annual Salons. Despite the deceptive mildness of their subjects - mothers and children enjoying an afternoon in the garden, a colorfully-clad lady strolling past a bookshop window, a little girl carrying a basket of clean laundry - the Nabis were radicals in art and politics. 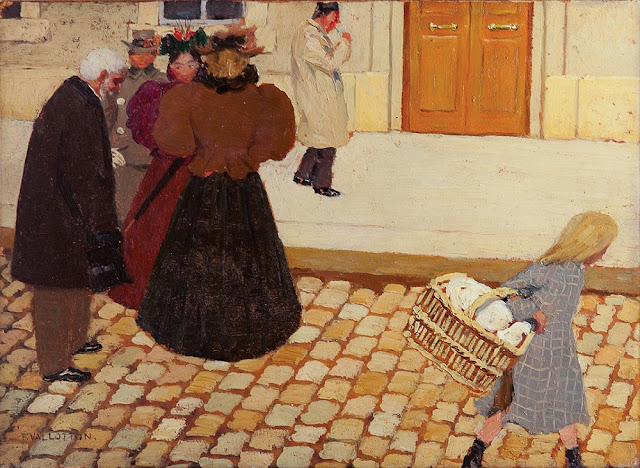 It is fitting then, that the first exhibition devoted to the Nabis in many years should have recently opened at the Phillips Collection in Washington D.C. The Phillips Collection rightfully proclaims itself the first museum of Modern Art. It should also be noted that Duncan Phillips bought Nabi paintings, especially by Pierre Bonnard, as part of his wide-ranging collection mission. 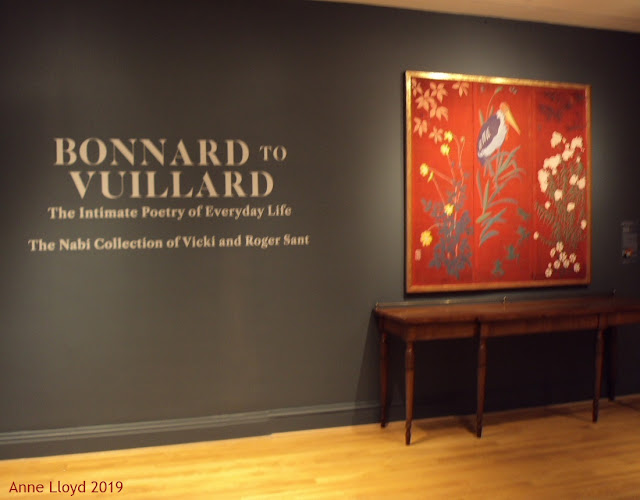 Anne Lloyd, Photo (2019)
Gallery view of the Bonnard to Vuillard exhibition at the Phillips Collection

The Nabis are right at home in this wonderful D.C. museum. Indeed, the works of art on view in the exhibition have been pledged as a future gift to the Phillips.

These Nabi paintings, prints, screens, bronze sculptures, ceramics, stained glass and works of fabric art were collected by Vicki and Roger Sant, an art loving couple who were first introduced to "Les Nabis" during a Phillips-sponsored trip to France in 1993. Sadly, Vicki Sant died in 2018. This outstanding exhibition is truly a celebration of her love of art and devotion to sharing with fellow art lovers. 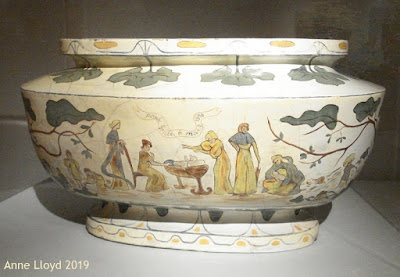 While in Paris, the Sants visited the exhibition, Nabis, 1888-1900. This was the last major exhibition to study the Nabis with a detailed, wide-ranging focus. A more recent display of several of the Nabi artists was held in 2001 at the Art Institute of Chicago and the Metropolitan Museum of Art in New York but was limited to decorative painting by Bonnard, Vuillard, Denis, and Roussel. Compared with art shows devoted to the Impressionists, Nabi exhibitions are very rare indeed.

The Nabis were an eclectic group, held together by a willingness to experiment. There was no single theme uniting them. Maurice Denis (1870-1943), a fervent Christian, devoted many of his paintings to incidents from the Bible, especially during the later part of his career. The Swiss-born Félix Vallotton (1865-1925) was a left-wing political radical. Although Pierre Bonnard (1867-1947) would later gain fame as the "last Impressionist," he did not slavishly follow Monet, Pissarro and Sisley by portraying the natural world as a "here and now" phenomenon. 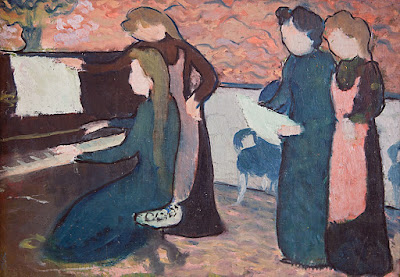 The Nabis were one in a line of break-away groups of rebellious artists, beginning with the Pre-Raphaelites in Britain during the 1850's and reaching across Europe to "Secession" movements, notably Vienna in 1897 and Berlin a year later. In 1903, after the dynamism of the Nabis had largely run its course, Vallotton and Vuillard were to join yet another coalition of revolutionary artists, the Société du Salon d'automne.

The diversity of style exhibited by each of the Nabi artists, however, made creating a group identity a difficult proposition. Unifying factors certainly existed. The Nabis as a group focused upon the details of domestic life. The allure of vibrant color, especially when arranged in intricate patterns, was a constant factor in much of their work. 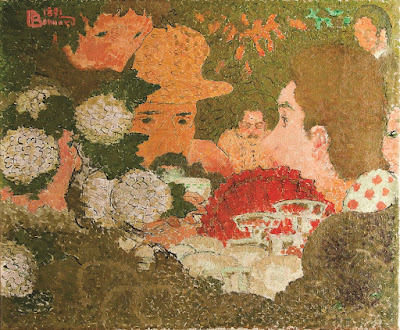 Pierre Bonnard, Afternoon in the Garden, 1891

The Nabis also were part of the late-nineteenth century Symbolist movement. Nabi painting, like Symbolist poetry, attempted to represent inner being, the spiritual reality of our lives which is often much closer to hand than we realize.

In 1896, the French philosopher, Henri Bergson, published a major work entitled Substance and Symbol. Bergson explored the interaction of sensations and actions with the ways that people remember and conceptualize the events of their lives. At the same time, the Nabis created works of art with an almost visceral "feel" of fabrics, architectural details and flowers which also serve as touchstones of human experience.

It was a Symbolist poet, Henri Cazalis, who first dubbed the artists "Les Nabis." For Cazalis, the Hebrew word for prophet captured the essence of his friends' devotion to a new artistic dispensation. As the Old Testament prophets had demolished the idols confronting the ancient Israelites, so the iconoclastic young artists would cast down the golden calf of Salon art. 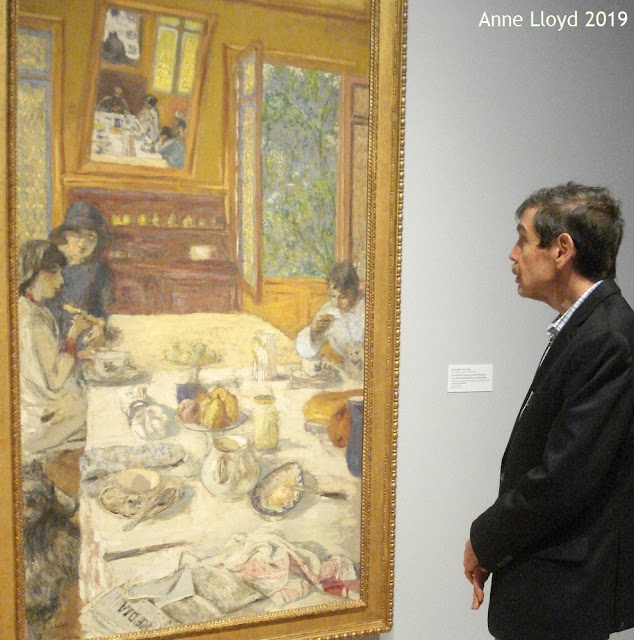 Bonnard, Vuillard: the Intimate Poetry of Everyday Life enables art lovers to appreciate the Nabis as a collective body of artists. Up to the moment of examining this superb exhibition at the Phillips, I was unable to do so.

In 2012, I visited the Jewish Museum in New York City, where I saw an excellent retrospective of the art of Édouard Vuillard (1868-1940). Over the years, I have also studied Bonnard's painting in one-man exhibits. In both cases, I was impressed with their technique, but puzzled by what seemed like an avoidance of contact with the dynamism of their times, particularly in the case of Vuillard. 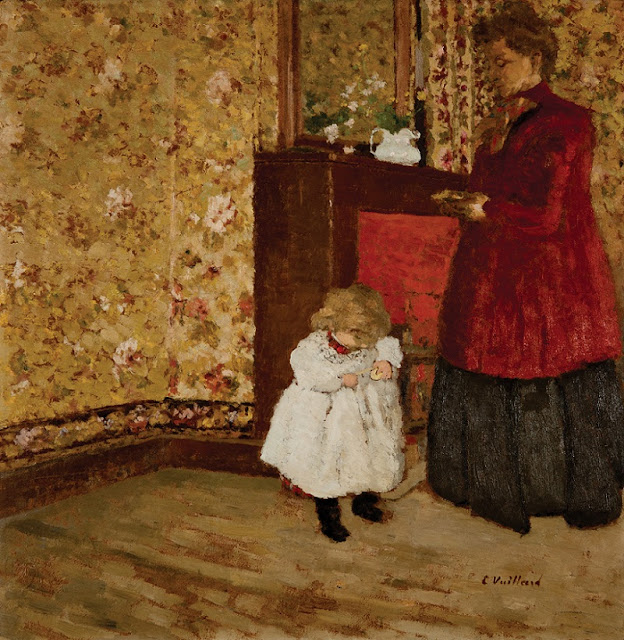 In his 1969 book, The Nabis and Their Period, Charles Chassé perceptively quoted from a contemporary account of Vuillard at work:

When Vuillard looked at a scene he did not half-close his eyes like so many painters who wished to preserve on their retina only the essential aspects of what they see; he ceaselessly registered the small details of things… He was enthusiastic about the kaleidoscope of the world, at the risk of repeating himself in an endless symphony like Ravel in his Bolero.

Chassé further noted that Vuillard became a successful portrait painter later in his career, yet retained his interest in the physical environment that was so notable of his Nabi years. He often painted his patrons with only the minimum of physical attributes necessary to establish their identity while depicting their surroundings in lavish detail.

"I don’t paint portraits,” Vuillard declared, “I paint people in their homes.” 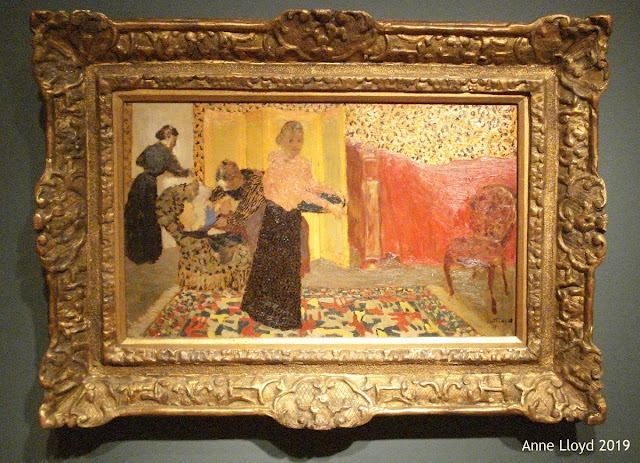 This amazing statement should be rephrased: Vuilliard - and his fellow Nabis - painted people in their environments - right now! Most people, even art lovers, live in the moment, at this point of time.

For this reason, the Nabis took the bold step of disregarding vanishing-point perspective, the key innovation of the Renaissance that defined Western painting when compared to  the art of other cultures.

Nabi paintings, by contrast, purposely dispensed with depth of vision. Everything is located "in your face," to borrow a modern, often disagreeable expression. Far from creating art in a hermit-like atmosphere, Bonnard, Denis, Vuilliard and the other Nabis created works which were very much in the "here and now."

Along with their accomplishments in painting, the Nabis were masters of printmaking, sculpture and ceramics. Bonnard showed a special aptitude in utilizing screens as an artistic medium. 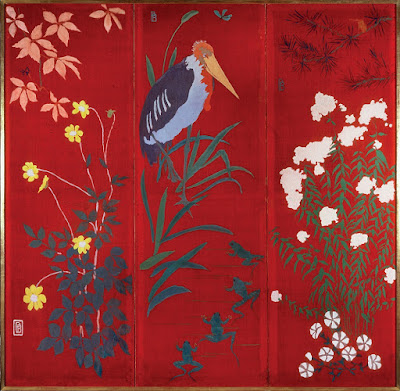 The influence of Japanese art is obvious in Bonnard's three-panel screen, The Stork and Four Frogs. The color-drenched background, the delicate handling of flowers and ferns, the Stork's almost Zen-like meditative state, underscore the vital role of Japonisme for the art of the Nabis.

There is an intriguing connection to another kind of "screen." This testifies to the Nabis awareness of the experiments leading to the invention of cinematography during the same years as their group was flourishing. Bonnard was friends with the Lumière brothers, Auguste and Louis, who invented the first true motion picture camera in 1895. This led to the historic showing of the first film on December 28, 1895 to an audience in Paris. 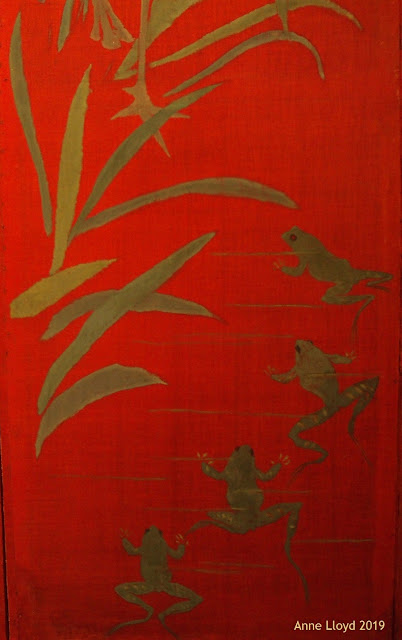 Bonnard's Stork and the Four Frogs, based on a fable by Jean de la Fontaine, was painted six years earlier in 1889. There is, thus, no direct co-relation with the Lumière brothers' film premiere. Rather, there is a shared sense of fascination with movement. Bonnard depicts the frogs, not as four individuals, but rather as single animal engaged in a four-sequenced act of leaping.

In 1896, Bonnard created a painted screen which he used as the basis for an impressive, five-color lithograph. It was entitled Nannies’ Promenade, Frieze of Carriages. The four frames of the screen appear to show a horse-drawn cab in motion. The effect is similar to the effect of closely examining a roll of the Lumiere brothers’ pioneering film, Workers Leaving the Lumière Factory. 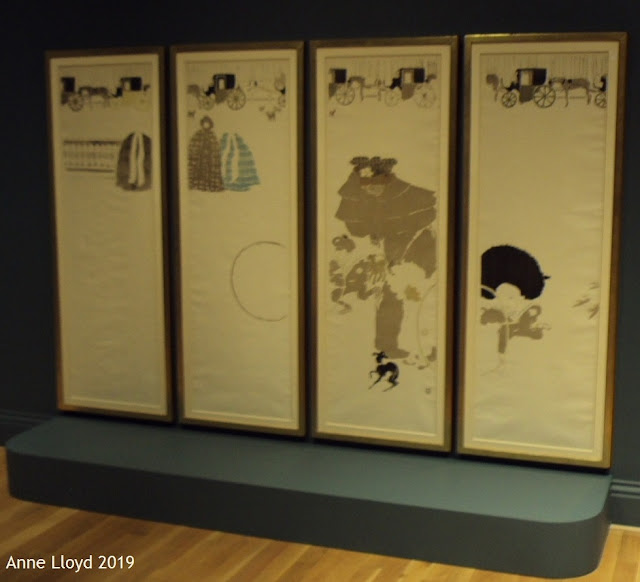 Appearances are deceiving. Bonnard shows a cab stand, not a moving cab. The vehicles are parked and the drivers are waiting for customers. Movement there is, however, taking place in the foreground – the zone of action in almost all Nabi works of art. A mother and her bonnet-wearing daughter walk-along and two boys scamper past them rolling their hoops.

Nannies' Promenade or Frieze of Carriages evokes the tremendous vitality of urban life, just as the Lumiere brothers’ films did. Without being directly related to early cinematography, this magnificent work by Bonnard joined in the dynamic transition from static to motion picture art which occurred during the 1890’s.

Every art group, even the supremely individualistic Nabis, will have at least one "odd man out." For the Nabis, this was Ker-Xavier Roussel (1867-1944). Though his talent was never in doubt, Roussel's sense of timing often missed a beat. Early in the Nabi years, his works were largely dark in color tones, while later in his career he integrated mythological elements into his landscapes just a Symbolism and allegory were going out of style.

Roussel achieved perfect harmony with his design for the stained glass window which occupies a central place in the Phillips exhibition. 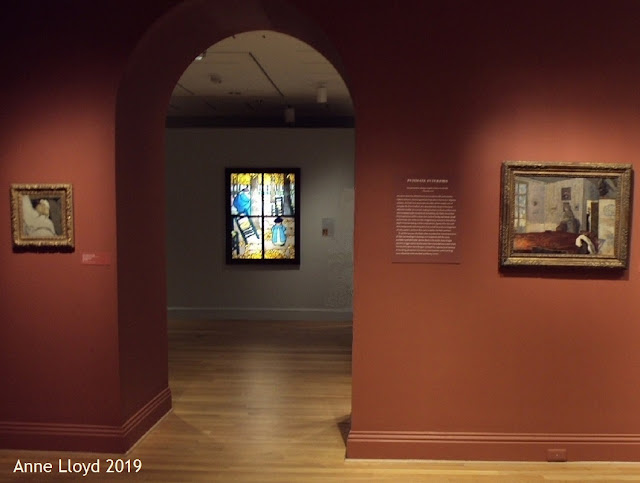 Roussel designed the cartoon for The Garden in 1895, as part of a commission from the German-born art dealer, Siegfried Bing. Other members of the Nabi group, including Vuilliard and Bonnard, contributed cartoons for the series. Roussel's window, executed by the Tiffany Company, is one of the few to survive from Bing's ill-fated effort to promote the Nabis. Roussel achieved near perfection with this brilliant work, but sadly, French art patrons were unimpressed. 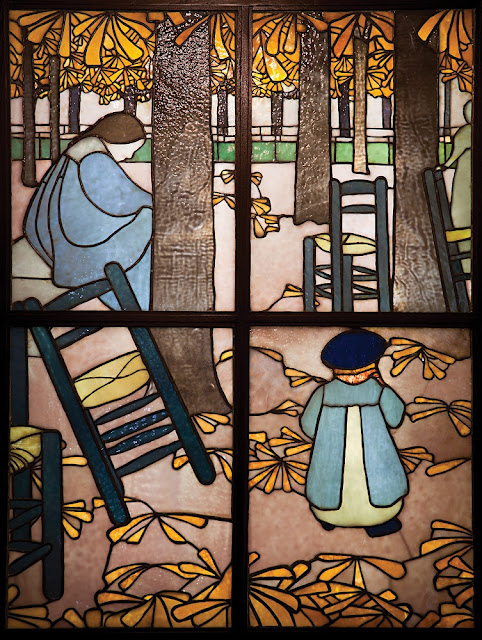 Thanks to the brilliant collecting of Vicki and Roger Sant, the Nabis can be appreciated as individual artists of their era and as leaders of the vanguard of Modernism. The Phillips exhibition is, thus, key to helping us understand the revolution in the visual arts during the last years of the nineteenth century and the first decade of the twentieth.

Yet, bold though they were, the Nabis never broke-ranks with that defining expression of French culture: vive la différence!

Look for a moment at Bonnard’s 1896 sketch, The Little Laundry Girl. Open your eyes wide as Vuilliard did while painting.

This exquisite, lively drawing shows the human spirit enduring and soaring,                        regardless of the circumstances of life. Lurching under the burden of her heavy basket of laundry, the young girl propels herself onward with determination, brio and a sense of style that is particularly Parisian. 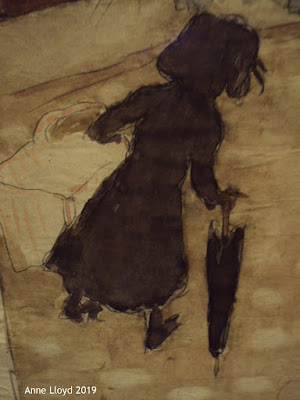 There is no holding her back, La Petite Blanchisseuse, no keeping her down. She will find her own way forward and do it her way.

The Nabis did the same with their art. Whatever medium they chose for their work, the primacy of each Nabi artist's unique approach to art was paramount. Charles Chassé writes:

To the Nabis a picture had merit only when it possessed “style", that is to say when the artist had succeeded in changing the shape of the objects he was looking at and imposing on them contours or a color that expressed his own personality.

This is what we see displayed to such magnificent effect in the Phillips Collection exhibition, Bonnard to Vuilliard, the Intimate Poetry of Everyday Life.

Anne Lloyd, Photo (2019) Gallery view of the Bonnard to Vuillard exhibition at the Phillips Collection.