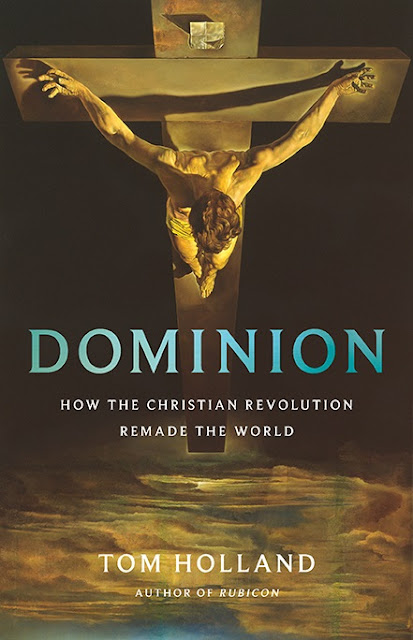 Dominion: How the Christian Revolution Remade the World

As I read Tom Holland's Dominion: How the Christian Revolution Remade the World, my thoughts turned to Dietrich Bonhoeffer, theologian, philosopher and martyr.

In Holland's powerful account of Christian history, the price paid to secure Christian values and human justice is a paramount theme. Bonhoeffer, whose most famous book is entitled The Cost of Discipleship, is but one of Christianity's many martyrs.

By extension, Bonhoeffer's death calls to mind how the sacrifice of self is of fundamental importance to Christian art.

Dominion is not a coffee-table type art book and only indirectly deals with Christian art. Holland's cogent analysis and his brilliant retelling of the life-stories of saints and sinners motivated me to select Dominion for review in Art Eyewitness. This absorbing, unsparing book has enabled me to better grasp the concepts upon which great works of Christian art, like Caravaggio's masterpiece, The Crucifixion of St. Peter, are founded. 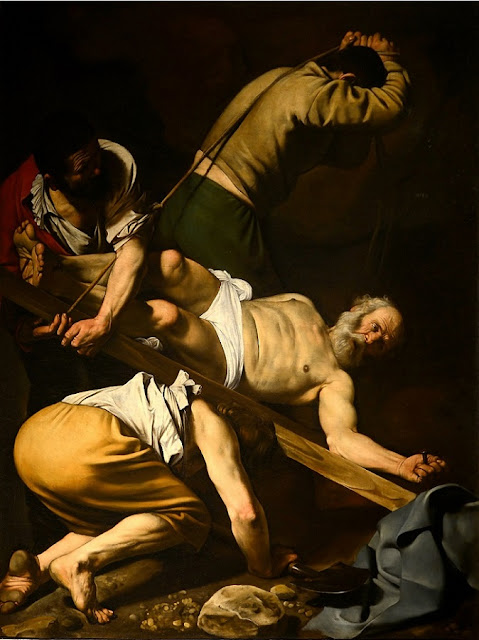 Caravaggio, The Crucifixion of St. Peter, 1601

Bonhoeffer was executed in April 1945 for his opposition to Hitler's genocidal madness. The Lutheran theologian had less than four months to live when he wrote a profoundly moving poem entitled "By the Powers for Good."

As a devout Christian, Bonhoeffer seemingly contradicted himself. How could a loving God press the cup of "bitter dregs" to the lips of a person of faith and/or bestow "promised grace"?  How can arbitrary acts of divine willfulness be squared with the Sermon on the Mount?

For Bonhoeffer (1906-1944), the crucifixion of Jesus of Nazareth is the definitive act of martyrdom. Christians like Bonhoeffer believe that Jesus, sharing in the divinity of God, shattered the chains of sin that had bound human beings to an unpredictable wheel of fortune.

What then of Christian history, with its less than edifying incidents of bloodshed and bigotry? For Holland, the very "scandal" of Jesus' agonizing, humiliating death is proof of the singular nature of the Crucifixion's history-changing consequence.

Over the centuries, interpretations of the life and - especially - the death of Jesus have changed, reflecting shifts in opinion. In ancient times, practicing Christians attempted to cover the shame of the Crucifixion with a more benign, reassuring image. Early Christian art showed Jesus as the young, beardless Good Shepherd, the Kriophoros. 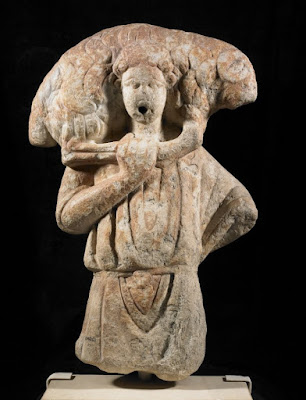 The Good Shepherd (Kriophoros), Third-Fourth Century, A.D.
Courtesy of the British Museum (Image does not appear in Dominion)

Following the fall of Rome in 410, "evil times" cast the world into suffering and shadow. Christian iconography responded to the emotional torment felt by the faithful to this shocking event. In place of the Kriophoros, Jesus, nailed hands and feet, to a Roman cross became  - and remains - the absolute symbol of the Christian faith. 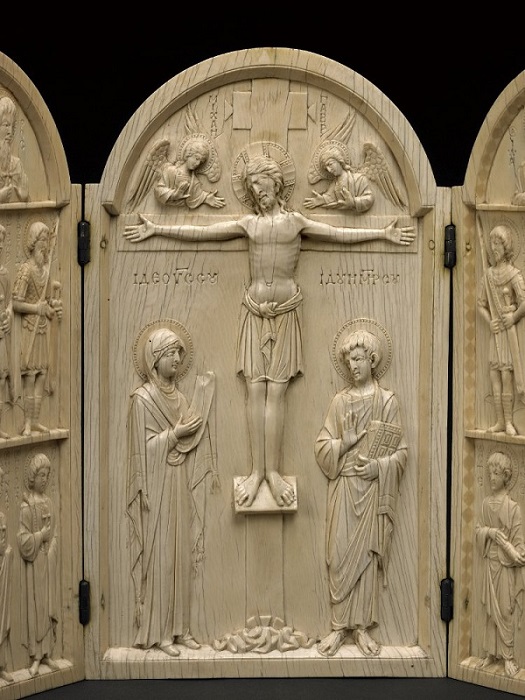 The Borradaile Triptych, Tenth Century A.D.
Courtesy of the British Museum (Image does not appear in Dominion)

Everywhere we look, often in very unexpected places, there are testimonials to the transforming effect of the execution of Jesus, of the sacrifice of his life for humanity. Holland, one of the most perceptive historians on the contemporary scene and a marvelous writer, follows the course of the Christian revolution and shows how it is now part of the "web and woof" of human culture throughout the world.

Belief in the death and resurrection of Jesus created a whole new sense of time. Instead of an endless cycle of war, famine and plague, presided over by fickle or indifferent gods, Christianity was different. It was dynamic and linear. Time was headed in one direction and toward a single goal: eternal life and spiritual communion with God.

The earthly conduct of those who embraced Christianity was marked by sequential steps: concern for salvation followed by virtuous deeds which testified to one's acceptance of Jesus' teaching. The onward journey of the Christian soul never stopped - prayer, reflection, faith and good works.

This progression engendered a new ideal which has since spread all over the world, in both religious and secular forms: progress.

Holland brilliantly shows how the early Christian reordering of time was based on the belief that Time would soon come to a cosmic conclusion. Over the centuries, this led to periodic outbursts of religious fervor stemming from a conviction that the eschaton was approaching. This "end time" never arrived - at least not yet - but outbreaks of insurrection often did. Several are memorably chronicled in Dominion, notably the Taborite Revolt of 1420 against the Holy Roman Empire and the Papacy. 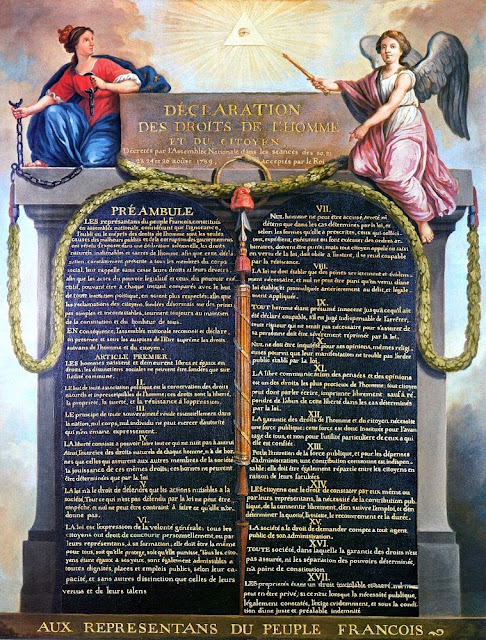 The Declaration of the Rights of Man and the Citizen, ca. 1789

Later revolts followed a similar pattern. The goals might be political or economic, but the imprint of a Christian mindset was not hard to discern. Though hostile to the Catholic Church, the French Revolutionaries of 1789 proclaimed the Declaration of the Rights of Man and the Citizen, a grandiose document graced by a Madonna-like figure and an angel who gestures toward the "all-seeing eye' of Providence. Holland writes:

That the Declaration of Rights claimed an authority for itself more universal than that of Christianity only emphasised the degree to which, in the scale of its ambitions and the scope of its pretensions, it was profoundly Christian.

The only thing missing from the Declaration of the Rights of Man and the Citizen was the Cross. The centrality of the image of Jesus on the Cross is a vital concern for Holland in Dominion and for all who wish to understand Western art.

Among the pictures in Dominion's center-spread of illustrations is the gruesome image of the heel bone of a crucifixion-victim named Jehohanan. A Jew living approximately at the same time as Jesus, Jehohanan was executed by the Romans and buried in a stone tomb with a nail still embedded in his right heel. The tomb was discovered in Israel in 1968. The pierced heel bone is the only skeletal evidence from antiquity of crucifixion, a cruel form of execution which the Persians and Greeks also utilized.

The bone fragments of Jehohanan  are contrasted with a vitally important work of Christian art. This is the oldest known depiction of the crucifixion of Jesus, circa 420-430 AD. It is one of the four Maskell Passion Ivories in the collection of the British Museum. This, the second of the ivory carvings, shows two scenes, the remorseful Judas dangling from a tree and Jesus hanging from  the Cross. The book illustration only shows the detail of Jesus' Crucifixion. 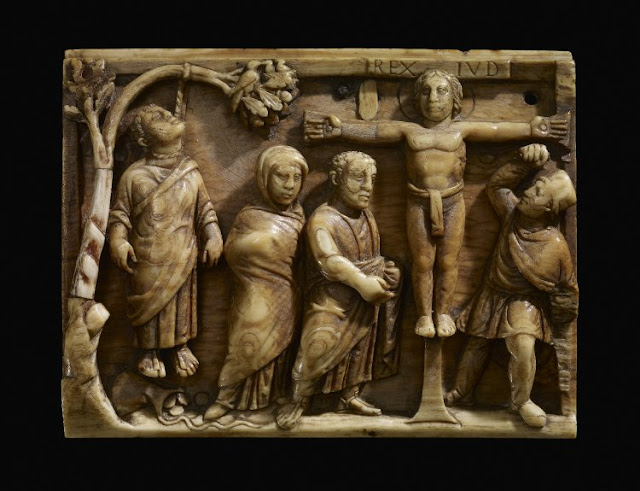 
During the Victorian era, Christian artists conflated the crucified Jesus with the Good Shepherd to create the image of a tender-hearted Messiah. This persona was treated with contempt by a disparate group of critics: the Marquis de Sade, Karl Marx and Friedrich Nietzsche, to name a few. Holland is particularly brilliant in his analysis of Nietzsche's baleful influence on the German artist, Otto Dix (1891-1969).

A machine-gunner in one of the German units sent to the 1916 Battle of the Somme, Dix had become enthralled with Nietzsche's man/superman theories even before 1914. This embrace of Nietzsche's controversial  philosophy was at the expense of his Lutheran religious convictions. What Dix endured during the slaughter on the Somme convinced him that Nietzsche was correct in proclaiming "God is Dead!"

Dix ... refused to see Christ's suffering as having served any purpose. To imagine that it might have done so was to cling to the values of a slave... Dix, volunteering in 1914, had done so out of a desire to know the ultimate extremes of life and death: to feel what it was to stick a bayonet in an enemy's guts and to twist it around, to have a comrade suddenly fall, a bullet square between his eyes; 'the hunger, the fleas, the mud'. Only in the intoxication of such experiences could a man be more than a man, an Ubermensch.

Another German veteran of the Somme reached similar conclusions about the status of Ubermenschen and the way that Christianity degraded human society. A failed artist unlike Dix, Adolf Hitler decided to put Nietzsche's precepts into practice.

Hitler's design for a "Thousand Year Reich" perversely mirrored the millennium of Christendom. From the fall of Rome to the Renaissance, Christianity aimed to create a "total society" for the benefit of its believers until the Second Coming finally took place.  Many less-than-Christian episodes occurred, described in grim detail in Dominion. But under the auspices of Christianity, truly astonishing accomplishments took place - and still do.

The concept of charitable work (virtually unknown in antiquity), the founding of Europe's universities, a rise in the social status of women (due in large measure to the devotion to Mary, mother of Jesus), the abolition of slavery and the creation of the glories of visual art in the West - all took place in lands where Christianity was the dominant religion and the guiding light.

In  "throwing  the baby out with the bath water," in this case the Infant Jesus, intellectuals and secular reformers like Nietzsche undermined the foundations of the Western world. Nothing of lasting merit has been set in its place, though Holland contends that praiseworthy charitable initiatives like the 1985 Live Aid rock concert reflect continuing Christian values.

While certainly reassuring, Holland's conclusions cannot banish concern over where these good intentions will lead. Nor does it answer a very pressing question. 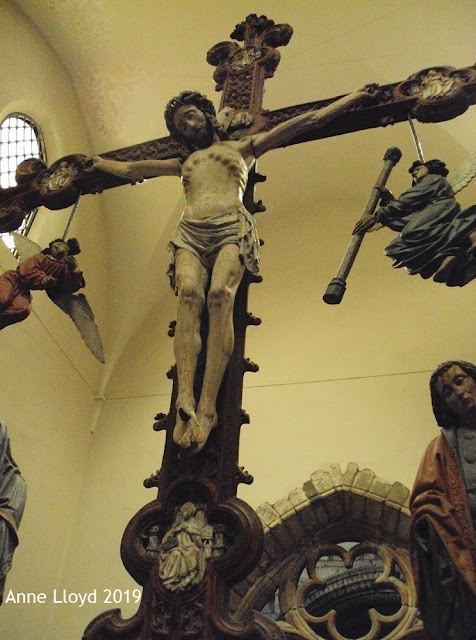 How long will this neutral, anonymous form of Christianity continue to function - without acknowledgement of Christ's Cross?

To expect Holland to resolve this dilemma is hardly fair. What I can say is that Dominion is a book of such critical importance that it will be joining a select group of treasured volumes on my bedside bookshelf for future - and frequent - consultation.