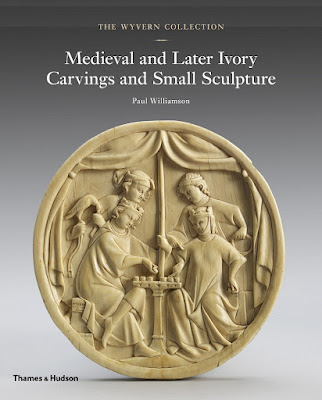 During the Middle Ages, artists working on masterpieces of religious art utilized the most precious of materials to create sacred objects. Not merely beautiful, these works of art were holy treasures. Crafted by human hands, they were inspired by God.

There was one other highly-valued substance to which medieval craftsmen - and their patrons - devoted much attention. Rare, often unattainable, this artistic medium was mentioned in the Bible, along with gold and jewels, has having been lavished by King Solomon on his palace in Jerusalem: ivory.

An authoritative - and breathtakingly beautiful  - book has recently been published by Thames & Hudson which recounts the story of this intricate and exacting art form.

Medieval and Later Ivory Carvings and Small Sculpture includes a number of works of art made from other precious materials, mother-of-pearl, amber, red porphry. These chapters, fascinating to be sure, are sidebars to the main theme, the painstaking carving of elephant and walrus tusks to create ivory devotional objects of astonishing beauty.

Today, at least in the Western world, the idea of using ivory from elephant tusks to create a work of art sparks outrage and horror. During the Middle Ages, ivory was often difficult to procure but it was not because elephants were facing extinction. It was simply a matter that nothing was too precious that it should not be used to honor God. 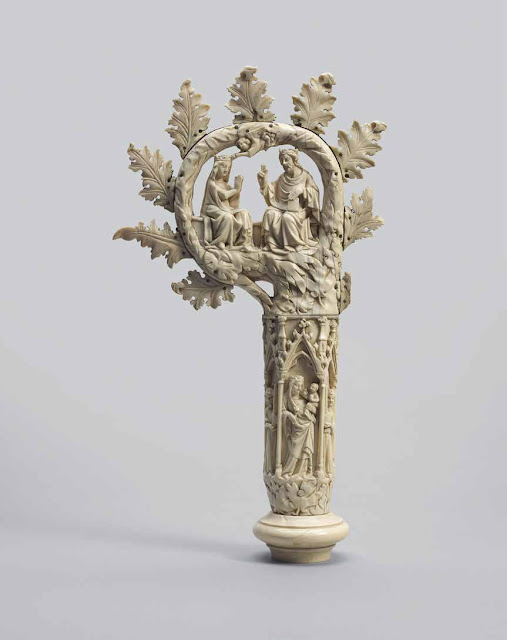 Head of a Crozier with the Coronation of the Virgin, mid-14th century
© 2019 The Wyvern Collection
The use of rare and costly materials to create works of sacred art underscores the word "use." These ivory carvings were intended to be used.They were not created as status symbols for their owners, either religious institutions like monasteries or wealthy nobles and merchants. Often times, possessing a table-top ivory triptych did serve to confirm the elite status of the owner (if only in their minds) but devotional use was paramount.

One of the key figures of Western cultural history, Abbot Suger (1081-1151) commented on the importance of ivory religious art, celebrating an especially notable example, "admirable for the most subtle and in our time unattainable carving of its ivory plaques, which exceeded human valuation in the representation of ancient histories."

The object of Suger's praise was the pulpit of the church at the monastery of St. Denis, one of the holiest shrines in France. Most of the ivory art works in the Thames & Hudson book were made for humbler settings. 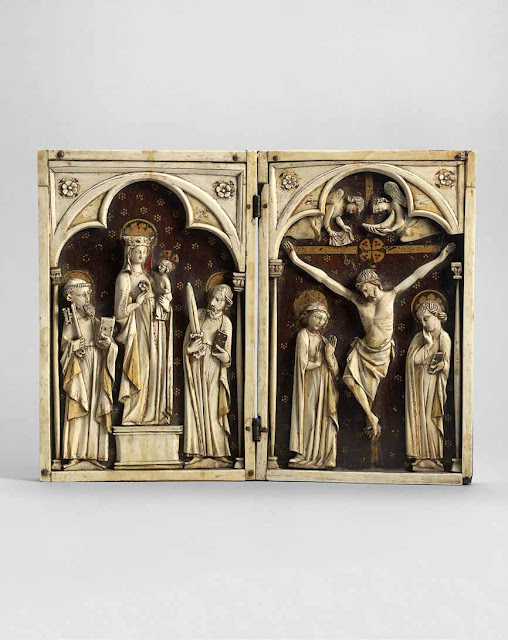 Diptych with the Virgin and Child and the Crucifixion, c. 1320.
© 2019 The Wyvern Collection

There was an upsurge of piety in Western Europe, following 1000 A.D., with an emphasis on private devotion. It continued into the High Middle Ages, as can be seen above in the Diptych with the Virgin and Child and the Crucifixion, made in the Rhineland, around 1320. The carved figures are set in shallow boxes joined by two hinges. Opened at prayer or reflection times, closed during the rest of the day, this diptych transformed a monk's cell or a nobleman's bedroom into a chapel. 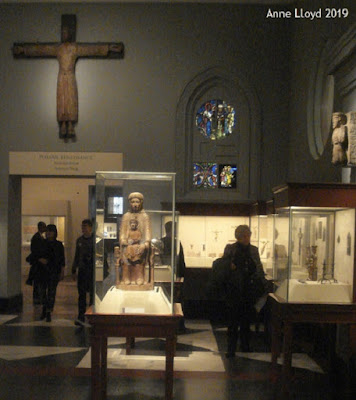 Many of the great museums of Europe and the United States have impressive collections of medieval ivory art works. The Metropolitan Museum of Art has over two hundred, at its main building and at the fabulous Cloisters located at Fort Tryon Park on the northern tip of Manhattan. The collection of the Walters Museum in Baltimore is even more impressive with over seven hundred medieval "ivories."

You will not find one ivory work of art from the Met or the Walters - or from an other museum - in the Thames & Hudson volume. The magnificent works of art in the book all belong to a private collection, the Wyvern Collection. Sensibly, the owner has kept his (or her) identity private, as well as the location of these wonderful works of art.

Medieval and Later Ivory Carvings and Small Sculpture is the second Thames and Hudson book to study the Wyvern Collection. The first volume, published in 2018, surveyed sculptures made from wood, stone and metalwork.

The origins of European Ivories can be traced to secular artifacts, like the hilts of Viking swords which often had grips carved from Walrus tusks or the antlers of reindeer. Game pieces like the celebrated Lewis Chessmen of the British Museum were made from walrus ivory. There are a number of delightful game pieces in the Wyvern collection but its most magnificent secular work, carved from ivory, is surely the hunting horn or oliphant shown below.

This oliphant is believed to have made in southern Italy during the late eleventh century.
During this period, the Normans, Vikings on horseback, were aggressively establishing feudal states in Italy and Sicily. One of the most extraordinary sagas in medieval history, the story of the Normans in Italy was memorably recounted by the great historian, John Julius Norwich in his books, The Other Conquest and The Kingdom in the Sun.

The hunting motifs on this horn, however, show cultural signs of the political power which the Normans sought to overturn. As the astute commentary in the Thames & Hudson book notes, "the figure style reveals a Byzantine sensibility transformed into a Western idiom, a mixture commonly found in south Italian Romanesque sculpture."

Artists of the Eastern Roman or Byzantine Empire had long upheld the ancient craft of ivory carving. Much of the religious imagery of Christianity in Western Europe can be traced to presentation pieces sent by the emperors of Byzantium to the rulers of the rising kingdoms of Western Europe. Along with the finished art works from Constantinople came the raw material itself, elephant tusks from East Africa.

It is a noteworthy that the ivory used during the late Middle Ages came from the tusks of wild elephants from East Africa, rather than from the Indian subcontinent. The tusks of African elephants are longer than those from India. Both male and female African elephants grow tusks. The trade in elephant tusks from Africa to Constantinople and later to Italy came via Islamic states and was frequently interrupted by war.

At such times, artists in Europe reworked existing pieces of ivory, some made hundreds of years previously, or carved small plaques, to conserve ivory. These were then incorporated into larger works, such as this reliquary triptych from Siena, dating to 1370. 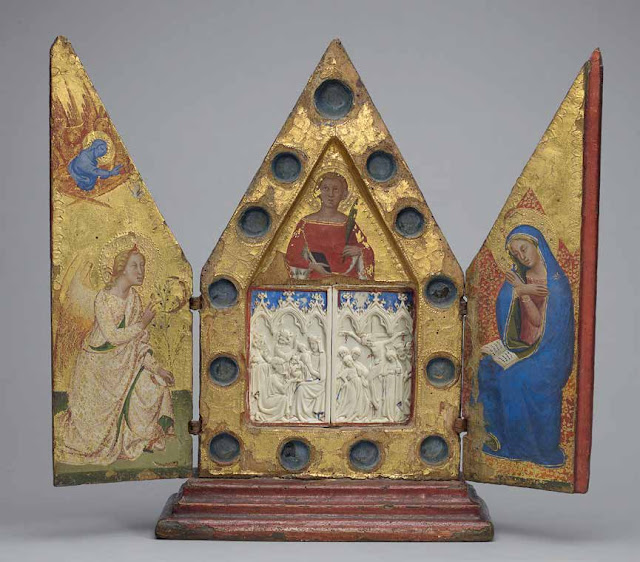 Bartolo di Fredi, Reliquary triptych with plaques of the Adoration of the Magi and the Crucifixion, c.1370. © 2019 The Wyvern Collection

The carved plaques depict the Adoration of the Magi and the Crucifixion. The painted scene shows the Annunciation, created by Bartolo di Fredi (c.1330–1410). Above the ivory plaques is the portrait of a saint, likely one of the patrons of Siena, St. Ansanus. In a particularly moving touch, God the Father, painted all in sacred blue, hovers over the head of the Angel Gabriel. Thirteen round holes once held relics of Christian saints.

This deeply moving work of art and piety is made all the more incredible by considering its small size. When open, the triptych measures, approximately 14 inches high by 15 inches in width. The ivory plaques are even more astonishing, each measuring a mere 4 inches in height by 2 1/2 inches wide.

The story of this small wonder does not end with its diminutive size or the artistic skill which went into its creation.  Created around 1370, the triptych dates to the years following the Black Death. A world-wide pandemic, Bubonic plague reached Europe from the Mongol domains in 1347. The Black Death is believed to have killed over a third of the continent's population. Siena, the rival city to Florence in Tuscany, was especially hard-hit, with half of its citizenry perishing.

Tom Holland, in his new history of Christianity, Dominion, notes that an ancient statue of Venus had been unearthed in Siena shortly before the outbreak of the plague. The rediscovery and appreciation of ancient art was just beginning in Italy and the town fathers of Siena decided to display the nude Venus in the town square. With the coming of the Black Death, the hunt for scapegoats commenced. The "shameless" Venus was targeted for blame and smashed to bits.

The surviving people of Siena were lectured to forget about Venus and cherish the special role of the Virgin Mary in Christian doctrine. This post-Black Death reliquary triptych is thus a reminder of a terrible period of human history. It also highlights the human capacity to find spiritual meaning and new visions of beauty even in the most appalling of circumstances. 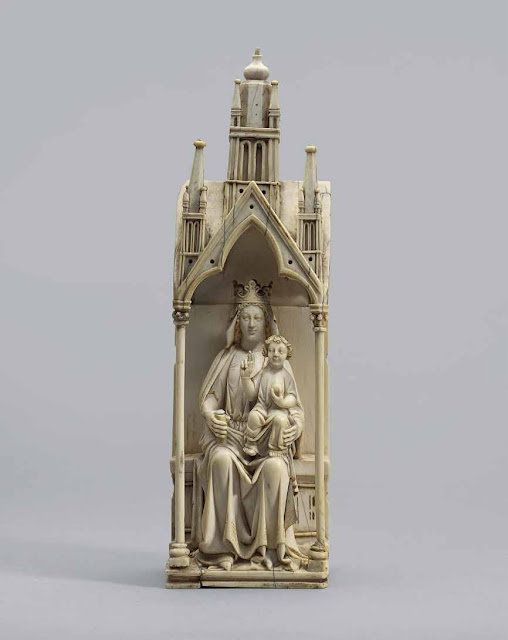 Central panel of a tabernacle polyptych with the Virgin and Child, c. 1250–60
© 2019 The Wyvern Collection

The role, some might say "cult," of the Virgin Mary in late medieval Christianity is a complex issue. Tom Holland, in Dominion, treats it masterfully and I plan to review his book in the new year.

In an earlier post, I reflected on the Byzantine roots of the Virgin Mary's place in art, as well as religion. The later Middle Ages is no less fascinating as we can see in this ivory masterpiece.

The Central panel of a tabernacle polyptych with the Virgin and Child (above) was likely made in the north of France, around 1250–60. The Virgin and Christ Child shelter in an edifice which mimics the design of the great cathedrals like Chartres and Notre Dame in Paris. These soaring places of sanctity thrill the eye but it is the worship of believing Christians taking place there which make these cathedrals holy places.

The pose of the Virgin and Child in the above work of art re-appears throughout this wonderful Thames & Hudson book. Amidst the Black Death, the Hundred Years War and countless other human-contrived horrors, people of faith created and cherished the works of art in the Wyvern Collection as testaments of their religious belief.

Art lovers today should be grateful to the Wyvern Collection's owner for preserving these ivory works of art. A "shout-out" should also go the author of the accompanying text, Paul Williamson, and to Thames & Hudson for publishing this beautiful volume and its predecessor.

Hopefully, further volumes are in the works and, better still, an exhibition will be organized to present some of the Wyvern Collection treasures to the appreciative gaze of people of faith today.

Book Cover of The Wyvern Collection: Medieval and Later Ivory Carvings and Small

Anne Lloyd Photo (2019) A view of Romanesque and early Gothic art at the Metropolitan Museum of Art.