Edith Halpert and the Rise of American Art at the Jewish Museum, New York 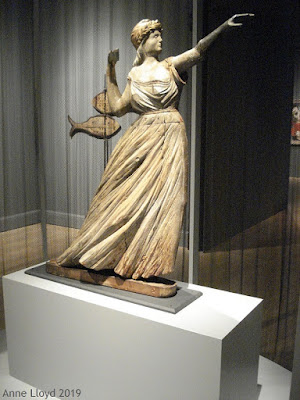 Edith Halpert and the Rise of American Art

The walls of the special exhibition gallery at the Jewish Museum in New York City are currently hung with art works by many of the greatest American painters of the first half of the twentieth century. Major works by Charles Sheeler and John Marin are featured in the distinguished company of Arthur Dove, Ben Shahn and Jacob Lawrence. Displayed with these masterpieces of Modernism are equally extraordinary works of American folk art. 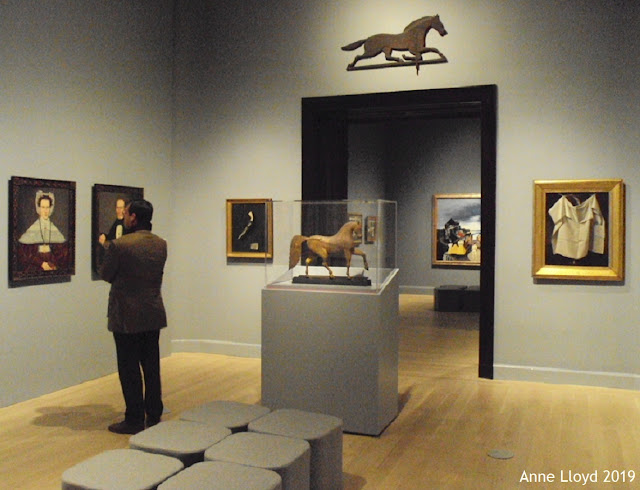 Strolling through the exhibition, Edith Halpert and the Rise of American Art, you will be greeted by the improbable company of an iron horse weather vane, a "key and saw" trade sign, one of the earliest American portraits, painted by the "Gansevoort Limner" around 1735, and other rare specimens of Americana. I was especially impressed by the hen pheasant weathervane, likely made in New England around 1875. This wondrous creature  seemed about to take flight in the exhibition gallery right before my eyes. 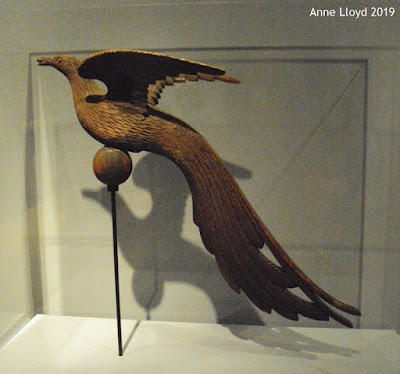 These enchanting, hand-crafted objects were not works of "art" according to the tastes and definitions of the 1920's and 1930's when they were first featured at a trend-setting New York City gallery. Nor would you expect them to have been displayed in close proximity to paintings by Stuart Davis. Yet, on second thought, Davis struggled for acceptance during those years, so this gallery owner, who displayed America's folk art and modern art, was indeed a visionary. 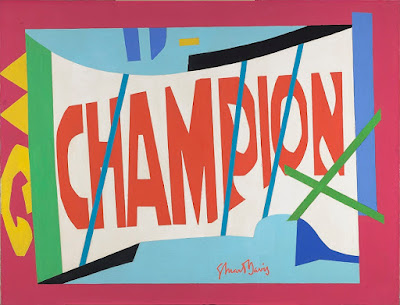 The most notable feature of the Jewish Museum exhibition, however, is not the abundance or variety of major art works. Rather, it is the palpable sense of "presence" of the American businesswomen who bought, sold and treasured these talismans of American creative genius. Edith Gregor Halpert, owner of the Downtown Gallery in Greenwich Village from the 1920's to 1970, died a half century ago but she is very much a spiritual force at the Jewish Museum.

There is much more, however, than the resonance of Halpert's extraordinary life and career to experience at the Jewish Museum. Over 100 works of art are on view, including several sensational paintings by Georgia O'Keeffe. In the Patio, IX, a virtually abstract work by O'Keefe, was one of the favorite paintings of Halpert's personal collection. 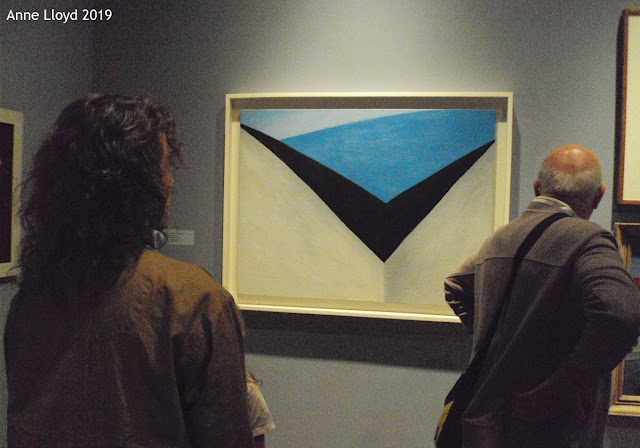 With three weeks left to go, this intelligent, brilliantly curated - and long-overdue -  exhibition is a "must see" retrospective of Halpert and her era.

Halpert was one of the first to grasp the deep links between the everyday artifacts and memorabilia of early America and sophisticated modern art. Contemporary museum practice places seemingly unrelated works of art, side-by-side, to promote "dialogue." Halpert, contrasting a flower-decorated baptismal certificate, created around 1805, with cutting-edge twentieth century paintings, pioneered that concept decades ago. 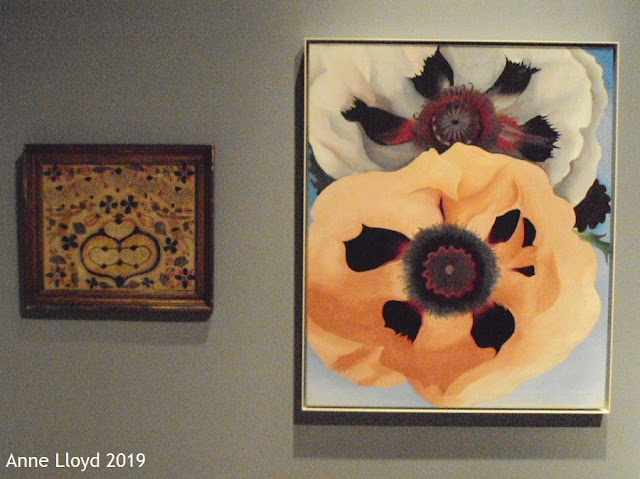 Edith Halpert (1900-1970) is not a name most Americans - even art lovers - will recognize. The exhibition at the Jewish Museum will hopefully make her contribution better known.  Halpert championed American art and artists at a time when the eyes of the American art world were chiefly focused on the avant garde in Europe. 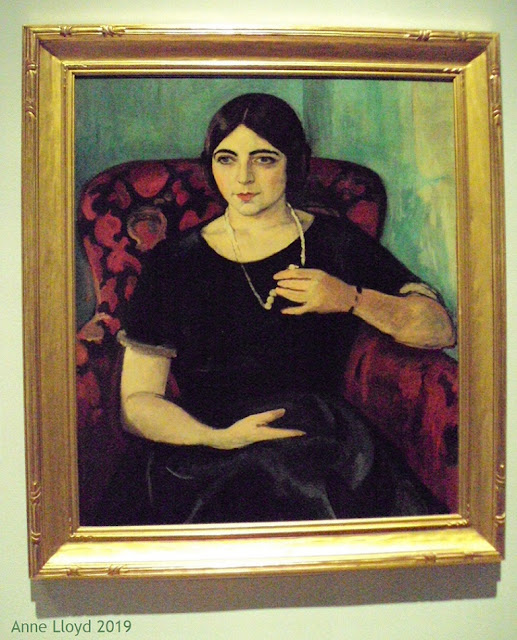 Edith Halpert was born in Odessa, Russia, emigrating with her family to the U.S. to escape the anti-Jewish pogroms of Tsarist Russia. Halpert's life-story is a classic illustration of the contributions of immigrants to the American Story, especially her pivotal role as a champion of art created in the U.S.

Halpert opened the Downtown Gallery in 1926, in partnership with her friend, Berthe Kroll Goldsmith. Initially called Our Gallery, the name was changed a year later. With so much of the New York art scene situated in midtown Manhattan, Halpert and Goldsmith were swimming against the tide in more ways than one. The Downtown Gallery, from its start, was dedicated to American artists, both living and deceased exemplars of the culture of the United States. 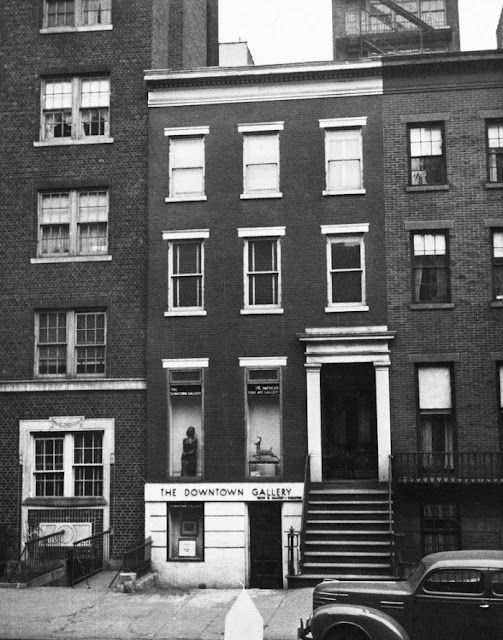 The Downtown Gallery was a pokey little place, located at 113 West 13th Street in the "Village." It was a very American-style, "do-it-yourself"  enterprise.

As noted earlier, Halpert had plenty of business smarts. She started working at age sixteen, with remarkable success in the marketing department at Macy's, as an efficiency expert for several New York garment firms and then at S.W. Straus Bank, where she was appointed to the firm's board of directors.

This sensational string of achievements all took place before Halpert was twenty-five years old. However, she had nurtured a love of art since childhood, taking art lessons as a young teen. She married an artist, Samuel Halpert, who strongly encouraged her to focus on art at the expense of her business career.

Against all expectation, given her dazzling rise in corporate America, Halpert took the plunge into the risky world of fine art sales. From the start, her insight into creative talent was astute, "on-target." Indeed, it might appear that Halpert marketed safe, conventional artists. When we see works by Charles Sheeler and Stuart Davis today, it is easy to forget the revolutionary aspects of their work during the early years of the Downtown Gallery. 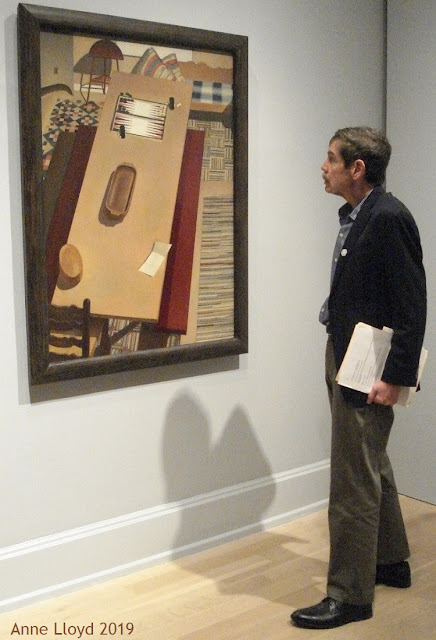 Samuel Halpert died in 1930 and Edith Halpert bought-out her partner, Berthe Goldsmith, in 1935. Except for her beloved dachsund assistant, Adam, Halpert was now the sole guiding force of her enterprise. This enabled her to continue to focus on American art and artists.

Despite her independent status, Edith Halpert, remained a team player. In 1931, she somehow found room in the same small building to open the American Folk Art Gallery, collaborating with Holger Cahill. Only a few short years later, Cahill was to play a major role in American cultural history as the head of the Federal Art Project during President Franklin D. Roosevelt's New Deal.

Halpert supported and marketed major, but struggling, artists during the decade of the Great Depression. One of Halpert's major clients was Abby Rockefeller. Halpert used her "in" with Mrs. Rockefeller to secure commissions for Charles Sheeler at Colonial Williamsburg, under construction during the 1930's with financial support from the Rockefeller family. 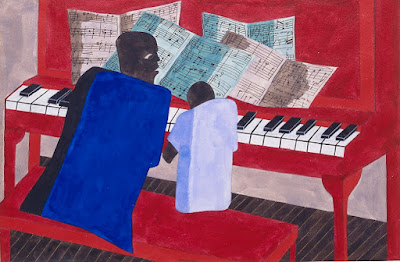 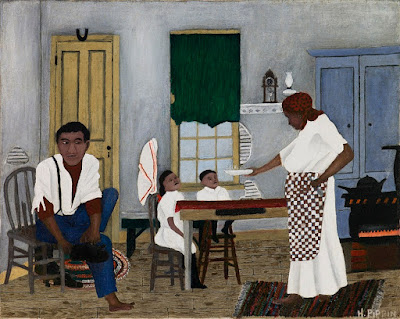 Both the modernist style of Jacob Lawrence and the folk-art conventions of the paintings by Horace Pippin won Halpert's support, thus validating the premise of her marketing strategy, but more importantly of her social conscience.

“Our gallery has no special prejudice for any school," Halpert declared. "Its selection is directed by what’s enduring—not by what is in vogue.”

Halpert's eye for talent enabled her to judge artists without regard to "race, creed or color" long before that became a socially-correct phrase. For Halpert, it was a call to action and in 1941, she organized a major exhibition, American Negro Art, 19th and 20th Centuries. Held at the Downtown Gallery, this was the first show devoted to African-American art at a commercial gallery. Halpert donated funds raised by the exhibit to the Negro Art Fund.

It is noteworthy, however, that there are few masterpieces by post-World War II artists on view in the Jewish Museum exhibition. Halpert, like other great owners such as Alfred Stieglitz and Ambrose Vollard,  pioneered a revolution in the arts but, later in life, experienced difficulty in making the transition to the ongoing, ever-changing scenario of Modernism. Halpert certainly understood and appreciated abstract art but her focus as a gallery owner remained rooted in the art of 1920's and 30's

The remarkable 1952 photo of Halpert, taken by Life Magazine's Louis Faurer, shows her in the foreground like a commanding general. A group of "proteges," who look more like loyal retainers, maintain a discreet interval behind her. None of the artists - Charles Oscar, Robert Knipschild, Jonah Kinigstein, Wallace Reiss, Carroll Cloar, and Herbert Katzman - are "household" names today. 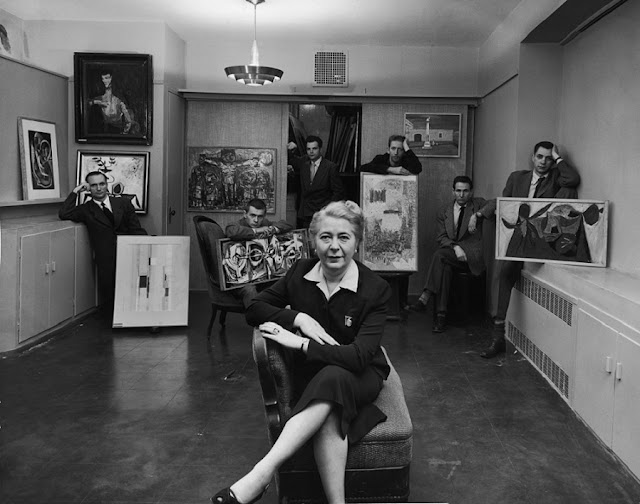 Halpert did plan her moves on the art scene like a bold commander. In 1927, with tactical flair, she launched an annual sale of modestly priced prints to entice new collectors into the art market. The print sales were held in December, for those in the gift-giving mode. The works of major print makers, Edward Hopper and Thomas Hart Benton, were featured along with talented, but underappreciated figures like Louis Lozowick and Wanda Gag. 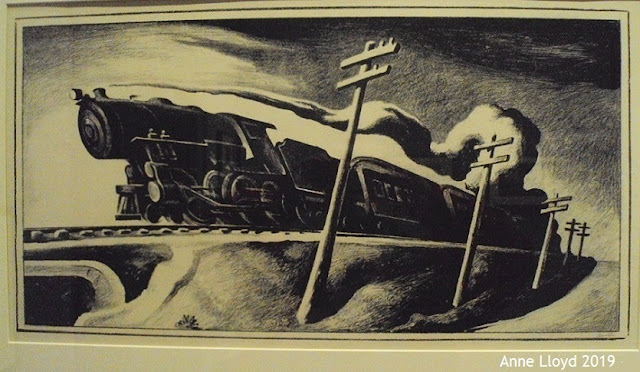 It says a great deal about Edith Halpert's vision of American art and American society that one of the artists she did make into a famous name was Edward Hicks (1780–1849). The Pennsylvania Quaker had painted the now universally acclaimed Peaceable Kingdom series during the early decades of the nineteenth century. Sixty-two versions of Peaceable Kingdom are known to exist today.

Almost every major American art museum has a Hicks Peaceable Kingdom in its collection. The example below, from the collection of the Fine Arts Museums of San Francisco, was a gift of Mr. and Mrs. John D. Rockefeller, 3rd. It was one of several versions of Peaceable Kingdom which Halpert listed on her inventory at the Downtown Gallery. 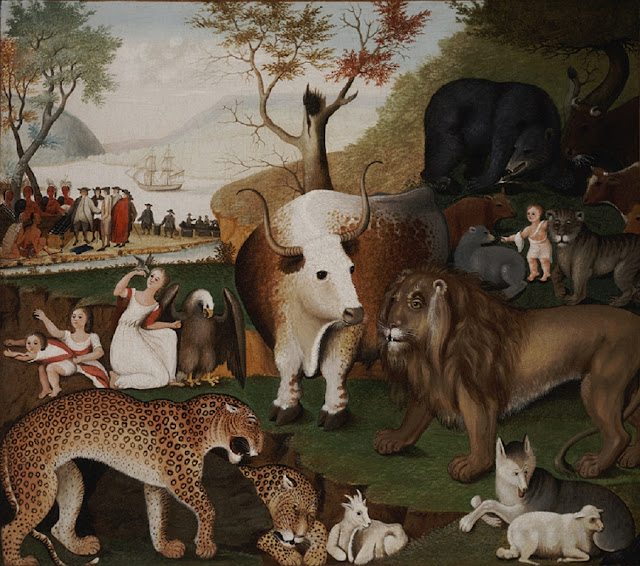 What makes this otherwise standard gallery transaction worthy of note? Halpert was the first person in the American art world to realize the "enduring value" of Hicks and his now iconic paintings. In December 1931, she presented an exhibition entitled American Ancestors which prominently displayed Peaceable Kingdom. Prior to this landmark exhibition, Hicks was virtually unknown.

Halpert had been introduced to American folk art by the great Polish-born sculptor, Elie Nadelman, who had built up a private collection of these American "primitives." Several of Nadelman's own works are on view in the Jewish Museum exhibition, which is only fitting as Halpert featured his sculptures at the Downtown Gallery. 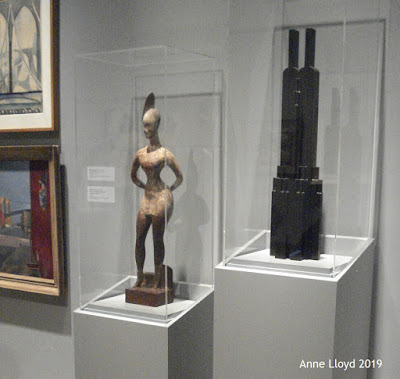 If Halpert played a pivotal role in establishing the reputation of Edward Hicks and supporting Elie Nadelman, she performed similar acts of recognition for other artists as well. African-American artists, American women artists, American print-makers - all received powerful support from Edith Halpert at the Downtown Gallery.

Halpert died in 1970. Her niece tried unavailingly to continue operating the Downtown Galley.. In 1973, almost a half-century after it opened, the Downtown Gallery (by then relocated to midtown Manhattan) closed its doors forever.

A moving - and entirely accurate testimonial for Edith Halpert was delivered by sculptor, William Zorach:

Edith Halpert was always full of ideas and projects. She didn’t have to depend on anyone. She did not follow in the footsteps of others; she did not take the easy way of promoting and selling European art where the path was clear and well trodden. She set out to promote American art because she believed in it and realized that if this country was ever to have an American art it had to come out of American artists.... This she made her goal and she has stuck to it with a single-minded devotion. American art owes her a great debt.