Art Eyewitness Book Review: Fra Angelico and the Rise of the Florentine Renaissance 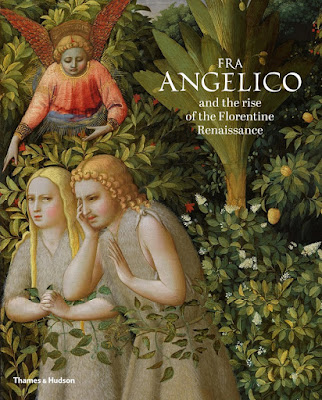 Fra Angelico and the Rise of the Florentine Renaissance

For art scholars, conscientious about assigning correct dates to works of art, the Renaissance presents a problem. When did this "rebirth" of Western art begin? When did painting and sculpture in Europe cease being International Gothic in style and start exhibiting the hallmarks of Renaissance theory and practice?

Most histories of the Renaissance focus on 1401 as the "takeoff" of the Renaissance in Italy. That year marked the momentous competition between Lorenzo Ghiberti and Filippo Brunelleschi to design the bronze doors of the Baptistery for the city of Florence. If one requires timeline accuracy, then Ghiberti vs. Brunelleschi provides a serviceable date.

The year 1425 is also a contender as the alternative birthday for the Renaissance. A brilliant new book, Fra Angelico and the Rise of the Florentine Renaissance, investigates the events of that decisive moment in art history. Published by Thames & Hudson, this thoughtful and lavishly illustrated book documents a major exhibition at the Prado during the summer of 2019 to help celebrate the 200th anniversary of Spain's greatest museum.

A quarter of a century after the Ghiberti- Brunelleschi competition, a Dominican monk named Fra Giovanni da Fiesole painted a puzzling work entitled Annunciation and Expulsion of Adam and Eve from Paradise. In many ways, his work looks notably medieval. Yet closer inspection reveals that this egg tempora painting on wood panel exhibits Brunelleschi's revolutionary art theories.

The implications of shifting the start of the Renaissance to this 1425 painting are unsettling. The key player in this scenario now becomes a monk who was proficient in manuscript illumination and application of gold leaf, hardly the skill set of a "Renaissance Man." 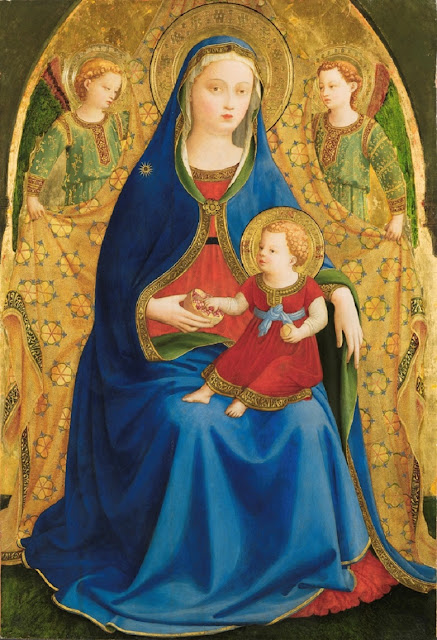 Fra Giovanni da Fiesole is better known today as Fra Angelico. Born Guido di Pietro, around the year 1395, he was a native Tuscan from the town of Vicchio, near to Florence. Trained as an artist, he joined the Dominican Order, along with his brother, who was also a noted illustrator of manuscripts.

Not only did Fra Angelico paint some of the most ethereal, indeed celestial, beings imaginable, but his own personality was close to being angelic. He was held in high esteem during his lifetime, as an artist of exceptional talent and as a devout Christian. In 1982, Fra Angelico was beatified by Pope John Paul II, an important step on the road to sainthood.


Fra Angelico excelled in more than traditional medieval artistic conventions. Both Carl Brandon Strehlke, the primary author of the Thames & Hudson book, and Ana Gonzales Mozo, who contributed a perceptive essay on Fra Angelico's painting technique, affirm that he incorporated advanced ideas from Brunelleschi, solidly based on mathematics, in the Annunciation and Expulsion of Adam and Eve from Paradise. 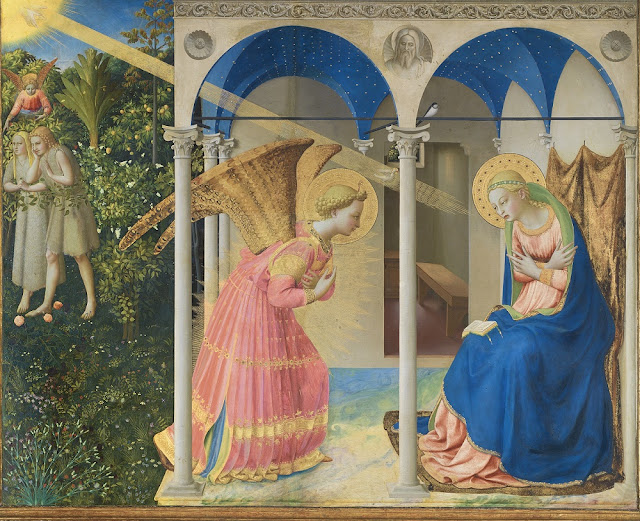 Fra Angelico, Annunciation and Expulsion of Adam and Eve from Paradise, 1425-1426

Strehlke, Curator Emeritus of the Philadelphia Museum of Art, notes that Fra Angelico took the bold step to accurately position his protagonists, the Angel Gabriel and the Virgin Mary within an architectural setting in the picture. They are not floating in space but occupy a set position, a "you are here" point established by mathematical calculation. Strehlke writes:

The architecture of the Virgin's house shows how open Angelico was to Brunelleschi's ideas about drawing buildings in spatial recession. It is the earliest surviving painted example of architecture in perspective. The manipulation of the orthogonals, horizon line, and vanishing point suggests careful consideration of what Brunelleschi's biographer Antonio Manetti noted 'painters today term perspective.'

Fra Angelico's painting depicts the interface - we might also say the intrusion - of the realm of the sacred into human reality. Although the Virgin Mary's house has a theater-set ambiance, Fra Angelico revealed that he was adept at utilizing Brunelleschi's methodology in the depiction of the small side room which has a "homey" feel to it. Look through that door and you see a small patch of the real world shown in perspective.

Fra Angelico, as a Dominican monk, had also to be faithful to the theological precepts of his Order's great theologian, St. Thomas Aquinas (1225-1274). Aquinas believed that reason, if founded upon faith, will lead to understanding and union with God. 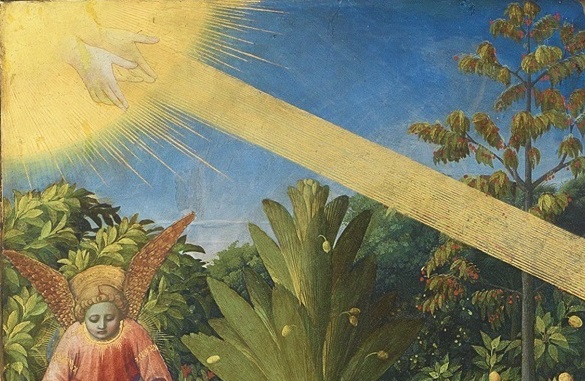 Fra Angelico, Annunciation and Expulsion of Adam and Eve from Paradise (detail)

The painting of the Annunciation is a visualization of this process. The streams of golden light proceeding from the hands of God represent the Incarnation, the act of divine inspiration by which Mary, a virgin, will give birth to Jesus the Son of God.

Fra Angelico, Annunciation and Expulsion of Adam and Eve from Paradise (detail)

Mary is mystified by the Angel Gabriel's entreaty but accepts that she has been chosen to be mother of the Messiah. This act of faith engenders an awareness, a deeper form of knowledge, that God is intervening in the lives of human beings.

Hard to believe?  Aquinas, the "Angelic Doctor," is famous for his voluminous, densely argued philosophical treatises, but he "cuts to the quick" on the point of faith.

The faith-acceptance-awareness process is what we see depicted in the major incident of Annunciation and Expulsion of Adam and Eve from Paradise. But what about the  Paradise Lost "sidebar"?  Why was this seemingly-unrelated episode from Genesis placed in juxtaposition with the Annunciation?

The answer reveals more of the "medieval" roots of the Renaissance.

Fra Angelico painted Annunciation and Expulsion of Adam and Eve from Paradise for the Dominican Order's church, San Domenico in Fiesole. The Thames & Hudson book has an intriguing drawing showing how this painting was displayed. It was positioned on a large frame which straddled the width of the church. Called the Rood Screen, this framework separated the nave of the church where the congregation stood or knelt from the sanctuary and choir. In this most sacred area stood the altar where the priest and monks gathered. Here the priest conducted the sacrifice of the Mass, turning bread and wine into Christ's body and blood.

The positioning of the Rood Screen prevented direct observation of the sacred ceremony by the lay people in the church. By way of compensation, paintings and statues were placed on the Rood Screen for them to contemplate as they listened to the clergy conduct the Mass.

One of the paintings hung on San Domenico's Rood Screen was Annunciation and Expulsion of Adam and Eve from Paradise.

An important hymn/prayer of the Roman Catholic liturgy during the Renaissance was Salve Regina, in honor of Mary, mother of Jesus. It was included in the evening prayer service known as Compline. The opening words of the prayer reveal why Fra Angelico painted Adam and Eve's banishment from Paradise on the same poplar board with the Angel Gabriel and the Virgin Mary.

Hail, holy Queen, Mother of Mercy,
Hail our life, our sweetness and our hope.
To thee do we cry,
Poor banished children of Eve;
To thee do we send up our sighs,
Mourning and weeping in this valley of tears.

The words of the hymn would have been powerfully reinforced by the imagery of the painting. Humanity's suffering, caused by the disobedience of Adam and Eve, would be redeemed through the agency of Mary's faith and the life and death of her son, Jesus.

Masaccio's Expulsion may appeal more to modern interpretations and ideas. Yet, Fra Angelico was an artist capable of great psychological insight. One of the supporting works in the Prado exhibition reveals the profound extent of his ability to probe human character and emotions.

In 1909, acting on the advice of Bernard Berenson, the Philadelphia collector, John G. Johnson, bought what was believed to be a portrait of St. Francis of Assisi. Johnson bequeathed his collection to the Philadelphia Museum of Art, including this work attributed to Fra Angelico. 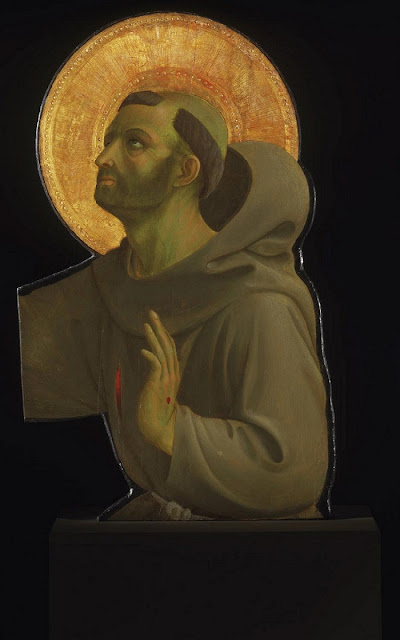 Berenson was correct in his assessment but only years later was it discovered that this image of St. Francis had been a part of an ensemble of two saints praying at the foot of the Cross. The figures of St. Francis, his companion on the other side of the Cross, St. Nicholas of Bari and of the martyred Jesus were all painted to appear as if they were statues, thus enhancing the realism of the scene.

Close inspection of the St. Francis "portrait," which survived the centuries since 1430 in much better condition than St. Nicholas, reveals the degree of Fra Angelico's close study of human physiognomy. The sagging "bags" beneath the eyes, the pinched features of the face, the straining neck muscles, all testify to the physical toll and privation of St. Francis'  austere devotion to God.

It is vital to remember that there is no portrait of St. Francis, drawn or painted from life. An imagined likeness was created about three years after his death in 1226. Fra Angelico's depiction of the beloved saint from Assisi is thus a psychological portrait and all the more convincing for being so. Fra Angelico, as a monk, well knew the personal cost of a life of sanctity. It is obvious - at least to me - that Fra Angelico painted the figures in this devotional work while in a state of meditative awareness of Christ, St. Francis and St. Nicholas.

This sense of communion between artist and subject is a key facet of Icon painting in the Greek and Russian Orthodox traditions. Fra Angelico, working according to the Western, Latin canon of Christianity, brought intense levels of spirituality to his work. Regardless of the form of interpretation, whether it was the medieval-looking Annunciation and Expulsion of Adam and Eve from Paradise or the visceral realism of his St. Francis, Fra Angelico painted in "communion" with the divine.

Fra Angelico was later to combine his skill in narrative painting with the profound feel for character and emotion which we see in his St. Francis of Assisi.

In 1436, Cosimo de Medici funded the rebuilding of the Dominican church and monastery of San Marco in Florence.  Fra Angelico was tasked with painting in fresco a contemplative scene from the life of Christ in each of the monk's cells and larger devotional works in the public spaces of the building. The series was brought to a high state of perfection, as can be seen in the version of the Annunciation which Fra Angelico painted in one of the corridors of San Marco. 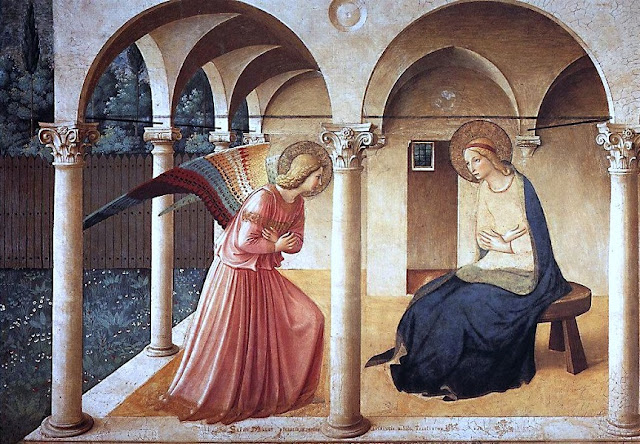 "One has to believe that this good monk has visited paradise and been allowed to choose his models there."

Images of Fra Angelico paintings from the collection of the Prado in Madrid, Spain, are  courtesy of the Prado web pages: