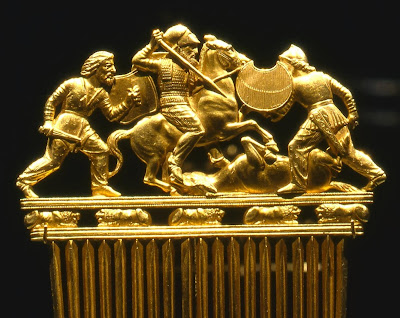 Nomad Warriors of the Steppe

During the battle of Stalingrad, 1942-1943, the keystone of the Soviet defensive position was a hill known as Mamayev Kurgan. A little over 300 feet in height, Mamayev Kurgan had been created by the hand of man, centuries earlier. The crucial "high ground" of the Soviet stand at Stalingrad was a funeral mound or tumulus, reputedly for one of the leaders of the Mongol invaders who had devastated Russia during the thirteenth century.

Mamayev Kurgan is one of thousands of such burial mounds which dot a huge swathe of Eurasia, stretching from Mongolia to Macedonia. From these buried tombs, an impressive array of treasures and artifacts have been recovered, relics of human societies which flourished and faded without the benefit of written records.

Among the ancient peoples who buried their dead in "kurgans," the Scythians are by far the most important. By two strokes of good fortune, the culture of these otherwise mysterious nomads is known to us in considerable detail. Herodotus, the Greek "father" of history, wrote about the Scythians at great length during the fifth century B.C. and modern day archaeologists have been able to verify much of his narrative, often with incredible precision. 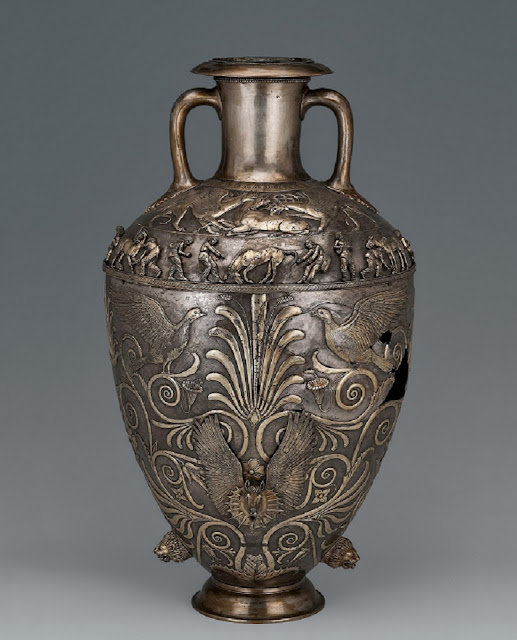 The Chertomlyk Amphora, 4th century BC

These two "good turns" have led to another, an outstanding book by Barry Cunliffe.  Written with the general reader in mind, The Scythians tells a centuries-long, very complicated story with a concise mastery of detail. Cunliffe, one of the greatest authorities on archaeology today, is an accomplished literary stylist, writing with insight and human feeling. 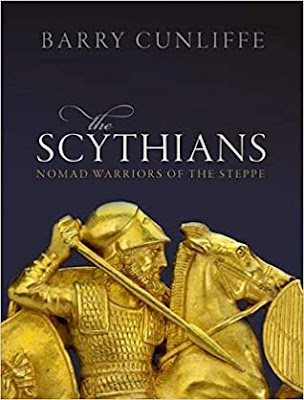 This last point is worthy of comment, before proceeding further with this essay. The Scythians were a restless, wandering group of Indo-European peoples. They were hardy nomads who were able to thrive in conditions which most modern people could not endure. Their social ethos was marked by hunting and warfare which was vividly depicted on their works of art.

Cunliffe relates the evidence of extreme violence in Scythian society with a fine balance of judgement and understanding. He describes the gruesome discovery in a Siberian kurgan of the well-preserved remains of Scythian man who had been killed and scalped around 300 B.C. The excavation of Kurgan 2 at Pazyryk in the remote Altai Mountain confirmed descriptions by Herodotus of the savagery of Scythian warfare in the region surrounding the Black Sea.

The history of the Scythians is not for the faint of heart. Yet, it is sobering indeed to contrast the singe corpse of a scalped Scythian warrior with the estimated 30,000 German and Russian soldiers who were killed in the struggle for Mamayev Kurgan, just one of the zones-of-combat at Stalingrad. The ancient Scythians had no monopoly of violence. 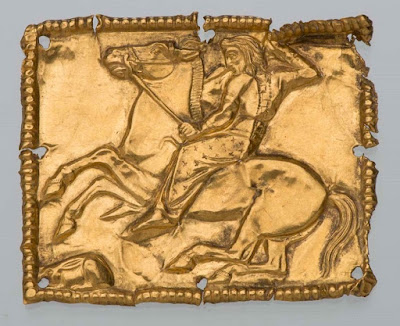 Gold Plaque of a Scythian Horseman Hunting a Hare, 4th century BC

The Scythians spent most of their lives hunting game animals and guiding vast herds of horses, sheep and cattle from one pasture to another. Some of the Scythians traveled over vast stretches of Eurasia. Others adhered to a regional mode of living, shepherding their animals on a seasonal rotation to mountain pastures in the summer and more protected valleys during the arduous Siberian winters. This was the life style of the Scythians who lived in the Altai Mountains on the present Russia/China border.

The Altai region was the original homeland of the Scythians. Here in remote antiquity, they domesticated the horse, without a doubt their supreme achievement. With the incredible mobility conferred by riding, especially as horses were bred to a bigger and more powerful size, the Scythians were able to travel incredible distances. Nature provided them with a ready-made highway, the grasslands known as the steppes. Several hundreds of miles wide, the steppes extended from the Altai Mountains to the Great Hungarian Plain in Central Europe. 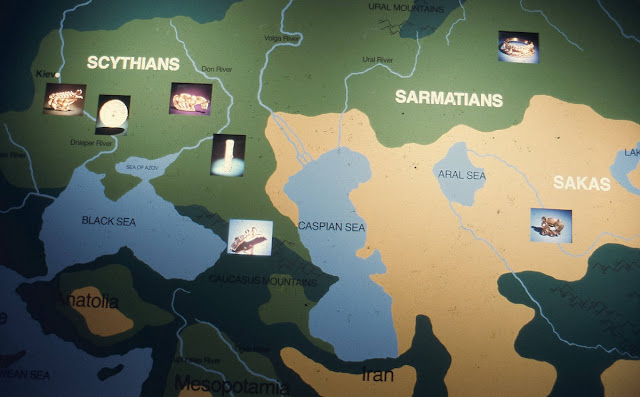 Gallery shot of From the Lands of the Scythians, Metropolitan Museum of Art, 1975

The map above was featured in the spectacular exhibition at the Metropolitan Museum of Art in 1975, From the Lands of the Scythians. The expanse of olive green which extends across the top of the map represents the steppes. More arid land, in tan, lay to the south, between the Caspian Sea and the mountains of Afghanistan. Cunliffe cogently describes the westward trek of the Scythian nomads, repeated many times, over this vast domain.

There were four distinct groups of nomadic peoples who shared the Scythian way of life: Kimmerians, Scythians, the Sakas, who veered southward past the Caspian and the Aral Sea where they ranged against the Persian Empire, and the Sarmatians (not to be confused with the biblical Samaritans). Like ripples in a pond, the movement of one group pushed its predecessor to look for new pastures and new horizons further to the west.

The epic venture of the Scythians occurred from around 900 B.C. to 100 B.C., roughly during the period of the rise of the Greek city-states to the establishment of the Roman Empire. The last of the Scythian groups, the Sarmatians, would fight against the legions of Trajan and Marcus Aurelius.

The central episode in this story, and the one which holds the most fascination for art lovers, concerns the Scythians who eventually settled in the region known as the North Pontic Steppe. Located on the north shores of the Black Sea, this area was the site of numerous Greek colonies, several on the Crimean peninsula. The mutually beneficial relationship of Greeks and Scythians shaped the course of Greek history and produced the glittering treasures which I saw in the From the Lands of the Scythians exhibit in 1975. 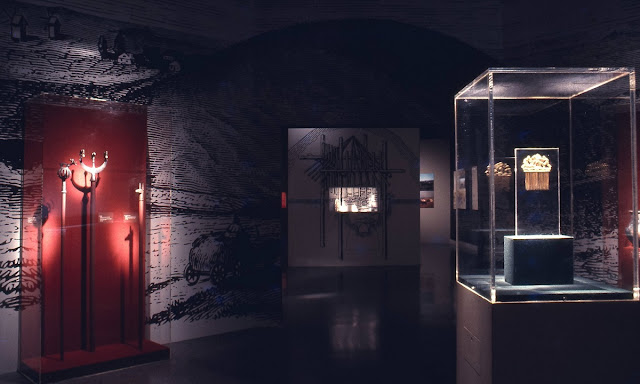 Gallery of From the Lands of the Scythians, with the Solokha Comb displayed at right

Many of the kurgans were robbed of their treasures in ancient times but several were overlooked or only partially looted. The "grave goods" crafted by Greek artists for the Scythian elite are truly stunning. One kurgan in particular, Kul'-Oba, in the Crimea, has yielded such a trove of magnificent works of art that it can be likened to the tomb of King Tutankhamun.

The Kul'-Oba burial site was located very close to the Greek colony of Panticapaeum, so there is not doubt about where these sensational artifacts were created. The kurgan featured a stone-built tomb, in which a Scythian king was laid to rest with an ensemble of golden objects for his use in the afterlife. Along with him was the body of his wife and a servant, who was likely sacrificed as part of the funeral ceremony.

The Kul'-Oba treasures were recovered in 1830 by a team which included museum professionals. Thus, a rigorous method of digging and record keeping could establish dates and other evidence which otherwise would have been lost. Over and over again, the results of such scientific excavation verify the accuracy of Herodotus' account. 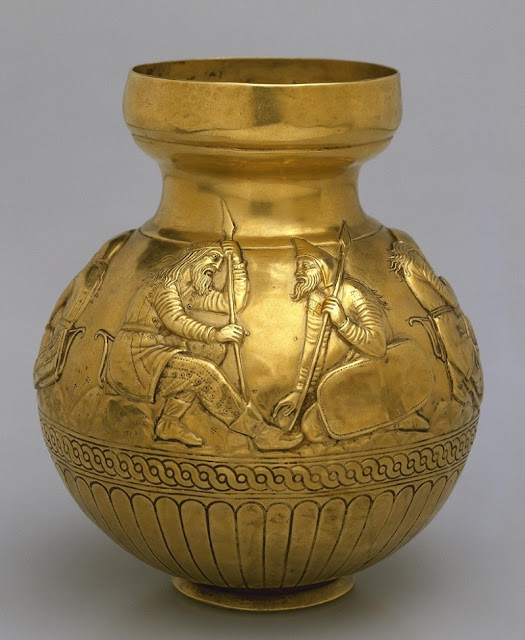 If the Kul'-Oba treasures testify to the skill of the Greek artists residing in the Black Sea colonies, these masterpieces also reflect the customs and practices of Scythian everyday life. More importantly, the Greek-produced art works illustrate the political and religious ideals of the Scythians and their view of the cosmic order. Cunliffe's analysis is especially brilliant in the way that he shows that it was the Scythians, not the Greeks, who set the terms of the cultural agenda.

While Greek influences were recognized, Cunliffe writes, the "nomad tradition remained strong, allowing in only those alien expressions that sat comfortably with their central beliefs and values."

Cunliffe's book features ten in-depth profiles of Scythian works of art, including the fabulous Kul'-Oba beaker shown above.  Cunliffe raises a novel theory that the scenes on the beaker held a deeper meaning for the Scythians than merely illustrating their social life and customs. The scenes on the golden masterpiece may represent episodes of the Scythian foundation myths. 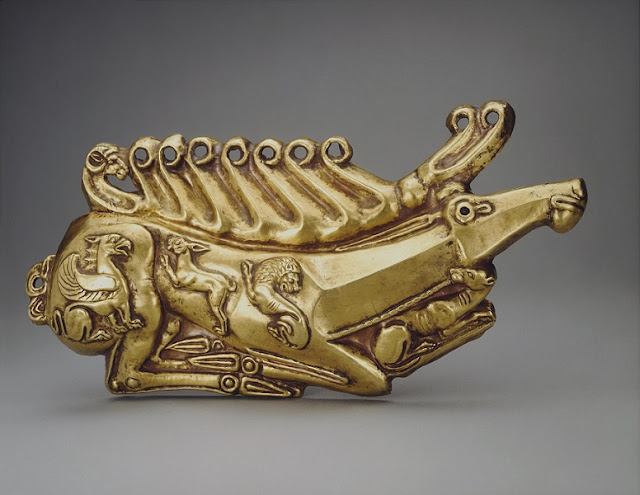 Plaque in the Shape of a Recumbent Deer, 4th century BC

Such a deep "reading" seems a likely interpretation for the golden figurines of recumbent stags found in Scythian tombs, including Kul'-Oba. These are not merely depictions of noble beasts being devoured by natural predators such as snow leopards and mythological griffins. Cunliffe and other scholars believe that these golden deer reflect the struggle for survival and the cycle of life. In one of the most moving passages of his book, Cunliffe writes:

For pastoralists husbanding the flocks and herds in the mountains and forests, deer and other herbivores - the elk, the moose, and the ram - would have been familiar sights and scenes of predation would not have been uncommon. Life's struggle was ever present: it was the very essence of living and it is no surprise that it became a central theme in Scythian art. Here it was conceptualized to fit into a world view of the supernatural we can only guess at but the deer, or its herbivore substitutes, may have been conceived of as the Tree of Life sustaining a world always in tension...

Far to east of the Kul'-Oba kurgan, excavators during the 1920's discovered and excavated kurgans at Pazyryk in the Altai Mountains, mentioned earlier in reference to the victim of the grisly scalping attack. Climatic conditions had kept the soil underneath the graves in a state of permafrost. Thus the clothing, woven and leather artifacts such as saddles and saddle cloths, wooden objects, even the tattooed bodies of the deceased had remained in remarkable states of preservation. 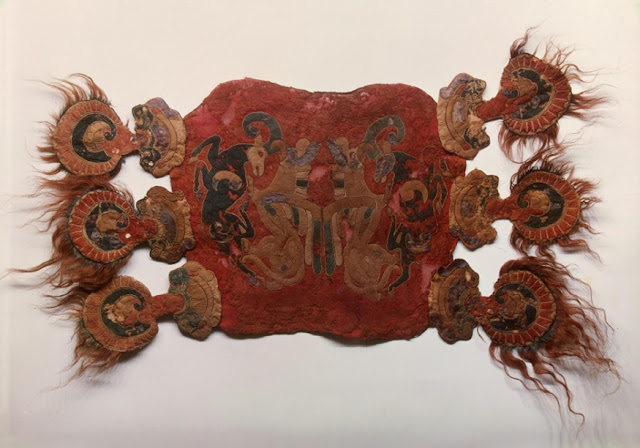 The Pazyryk discoveries revealed the Scythians to have been supremely gifted artists in their own right. Their mastery of wood-carving, weaving, dying and embellishing cloth and many other craft skills proved that their common culture was a heritage which they cherished and sought to preserve.

The Sarmatians feature only briefly in the last chapter of Cunliffe's narrative. He relates how they frequently raided the Roman Empire, usually crossing the Danube River when the overstretched legions were engaged elsewhere. On one occasion, during the reign of Emperor Marcus Aurelius, ca. 170, the Sarmatians did not retreat fast enough and were crushingly defeated. Rather than massacre the survivors, Marcus Aurelius enlisted them into a military unit and sent them to distant Britain, too far for them to escape back to their homeland. During the 1800's, a crude stone memorial was discovered in England, featuring an armor-clad horseman with a pointed helmet and dragon banner. These were items of battle gear of the Sarmatians, hearkening back to the ancient customs and beliefs of the Scythians.

Cunliffe quotes Herodotus who stated that the Scythians thrust a sword into a specially-prepared mound of earth. This sword-mound was an object of worship, as close as these nomads came to building a shrine or temple. Could this Scythian sword-cult have been brought to Britain by the Sarmatian troops, merging with Celtic and Nordic folklore to create the legend of Arthur and the sword in the stone?

Cunliffe does not comment on this theory. He wisely adheres to the vast haul of archaeological evidence and the writings of Herodotus as the foundation of his book.

The Scythians, superbly written and lavishly illustrated, is the best account of these hard-riding nomads we are likely to have for a long time to come. Especially worthy of note are the excellent maps and diagrams, expertly placed to help the reader chart the wanderings of the Scythians in some of the world's most remote locations. If Cunliffe does not stray into the realm of speculation, this outstanding Oxford volume is a better book for his wise decision to stay on the "beaten path."

However, I can't easily dismiss the tantalizing possibility that the Arthurian romance is linked to the Scythians. These horsemen of the steppes gallop in-and-out of the pages of history, grabbing a hold on our imaginations. Yet, when we attempt to reach out to the Scythians and formulate a definitive estimate of their fascinating culture, they elude our grasp.

Try and pin them down ... the Scythians just ride away, masters of their own destiny - and mystery.

Posted by Art Eyewitness at 5:01 AM