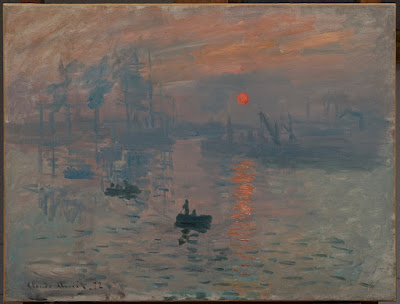 There is a mythic quality to the life of Claude Monet. Not only did Monet contribute mightily to the artistic revolution of Modernism, but his progress from a clever caricaturist as a young man to a venerable painter of vast, yet intimate, landscapes in old age encompasses the emotional journey of humanity in modern times.

The course of Monet's artistic development is the subject of a new volume in the Thames & Hudson World of Art series. Monet by James H. Rubin stakes a major claim for its protagonist as the "patriarch" of Modern Art. This is not a bold move aimed at toppling Cezanne from the throne of "father" of Modern Art.  Rather, Rubin's thesis serves as a reminder to art lovers to drop their preconceptions about Monet.

The word "patriarch" has biblical connotations. Monet, with his flowing beard and penetrating gaze, certainly looked the part. Rubin, a leading scholar of Impressionism, peers beneath the surface of Monet's life to discover spiritual depths which we had not expected to find. Monet was much more than "just an eye." Especially in the last two chapters of this outstanding book, Rubin presents several conclusions which ought to spur a reappraisal of Monet's place in the history of the art.

Artists during the last decades of the nineteenth century reacted against the "heroic materialism" of the Industrial Revolution. It was not second generation-Impressionists like Gauguin or the Symbolists who launched the revolt. In his quiet way, Monet had started the process, with the help of Renoir, as far back as 1869.

In that year, Monet and Renoir painted contrasting views of middle-class and working folk of Paris escaping - if only for a day - to the suburban swimming resort known as the "frog pond," La Grenouillère. Here in the dappled brushstrokes with which he depicted the current of the Seine, Monet began the journey which would lead him to the pond of Giverny. From there, he would to paint his beloved water lilies, "nymphéas," on the panels destined for the Orangerie Museum in Paris.

When Monet was born in 1840, classically-trained painters like Théodore Chassériau (1819-1856) would never have dreamed of focusing on a pond filled with water lilies. Nymphs rather than "nymphéas," mythology in place of reality were deemed worthy of art.

Monet would revise the drama depicted by Chassériau's painting of the Greek nymph, Daphne, as she turns into a tree to evade the amorous advances of Apollo. Monet sought escape from the soulless mechanization of nineteenth century Europe by creating a "total work of art" centered upon his lily pond, with sky and clouds, tree branches and flowers reflected on the placid surface of the water.

Monet did not turn himself into a recluse, much less a laurel tree. His focus on the water lilies at Giverny was in no way comparable with the obsession of a cloistered cultivator of rare orchids. Rather the ensemble of water lily paintings, bequeathed by Monet to the French nation in 1926, was the culminating series of art works which testified to a life-long effort at understanding humankind's place in the natural world.

Rubin charts Monet's career with commendable balance and judicious treatment of its various phases. Wisely, he does not attempt a detailed examination of the Impressionist exhibitions, 1874-86, which Monet's friend, Frederic Bazille, had proposed before his tragic death in the Franco-Prussian War. Rubin, also to his credit, does not chronicle French political and economic turmoil in detail until the final chapter. By doing so, he ensures that the general reader will more readily grasp these difficult, if important, developments when these are examined.

The major unifying threads to Rubin's narrative are Monet's absorption in the human interaction with nature and his preference for painting works of art in groups of closely-related subjects. The role of series painting in Monet's oeuvre has, of course, been explored before, but I have not read a more concise and cogent analysis of this facet of Monet's career than Rubin presents in his book. 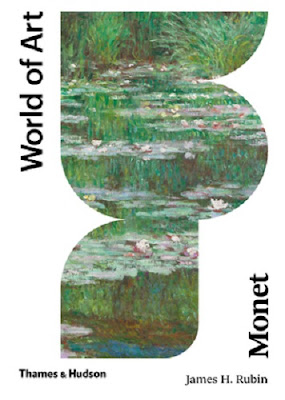 Lavishly illustrated, entirely in color, Rubin's Monet is the first new volume of the World of Art series, now being published with eye-catching cover art based upon the Golden Ratio. Along with Rubin's insightful text, 150 art works by Monet (and a few by fellow Impressionists like Renoir) are presented, some old favorites but others unfamiliar and intriguing. 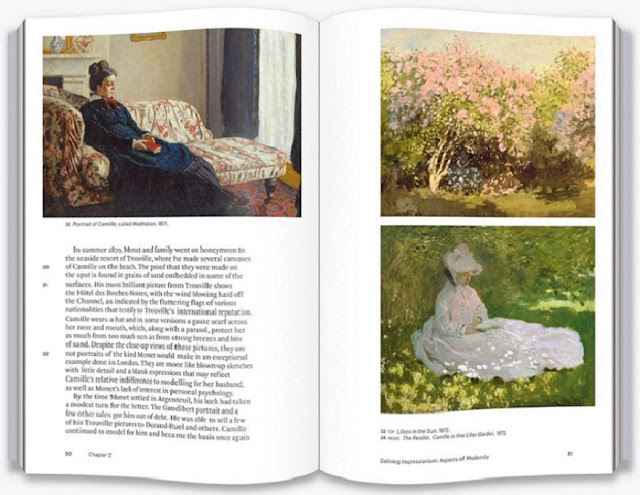 Monet's transition from drawing caricatures to a new "old" master, was motivated by the example of Eugene Boudin's landscapes. Early on, Monet tried his hand at a variety of genres, including portraits. Amazingly, when his skill at evoking a human likeness in caricature is recalled, Monet showed little interest in conveying human character or probing psychological complexity in his paintings.

In 2013, the Metropolitan Museum of Art presented a spectacular exhibition entitled Impressionism: Fashion and Modernity. Several early paintings by Monet were displayed, one of which was paired with a period dress which, except for a few decorative bows on the skirt, might have been the actual one which Monet painted. The effect was so striking - for once this word was appropriate - that I missed a telling detail.

The face of Madame Gaudibert was in profile. 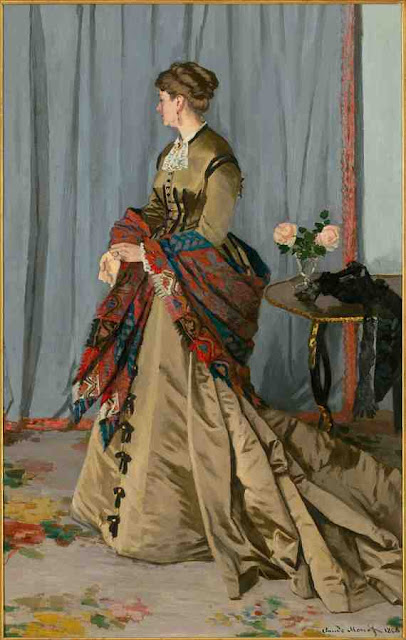 Monet captured the rustle of her silk dress and the trendy elegance of her cashmere shawl. Yet, the personality of Madame Gaudibert, her unique combination of character traits, is absent. Monet might just as well have painted this magnificent dress on a shop manikin and left it at that.

Incredibly, Monet exhibited little interest in the features, and more importantly, the inner being, of his first wife, Camille, when he painted her in various fashion-related poses. One of the most celebrated shows Camille wearing a gaudy Japanese kimono.  Lacking any kind of empathy with his model, this painting is one of Monet's weakest, for all the effort and skill that went into painting the kimono. 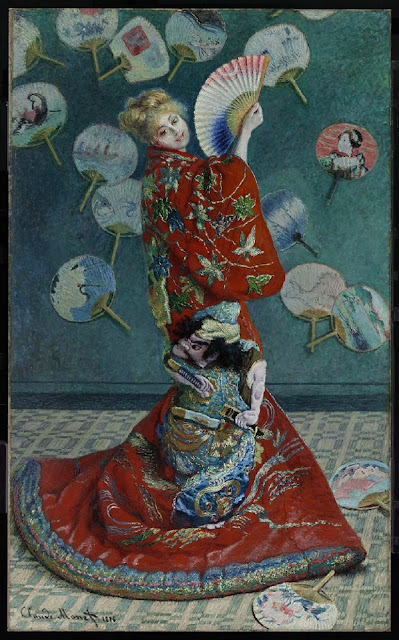 This disturbing lack of emotion may partly be explained by the fact that Monet was from Normandy, even though he was born in Paris. He grew-up in Le Havre, the site of the signature painting of Impressionism, Impression- Sunrise. Practical, taciturn and outwardly unsentimental, Monet was a Norman to his core. Yet, we know from surviving documents and personal recollections that he was capable of a great depth of feeling.

In the increasingly industrialized world of the 1800's, Monet sought to locate a place for human beings to root themselves, body and soul. Two of Monet's paintings, both from his early career, testify to the difficulty of achieving that goal. The first, The Seine at Bennecourt, is a proto-Impressionist work of the first rank. Painted in 1868, one year before the expedition to La Grenouillère, the scene shows a young woman in an idyllic setting. It is a superb painting, but of the type which would later earn Impressionism the unmerited reputation as "chocolate box" art. 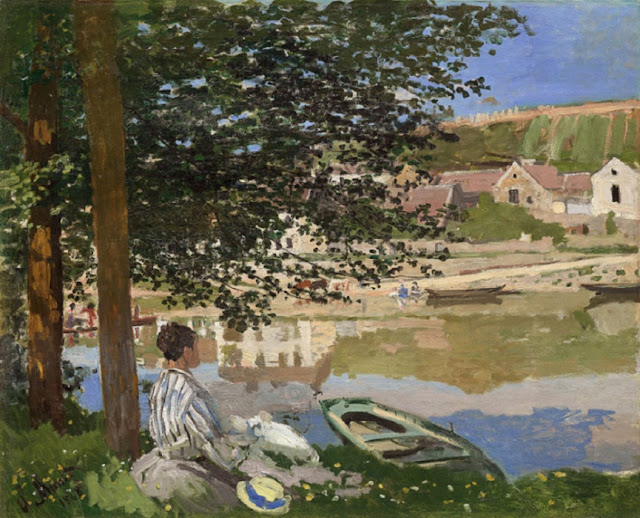 Claude Monet, The Seine at Bennecourt, 1868 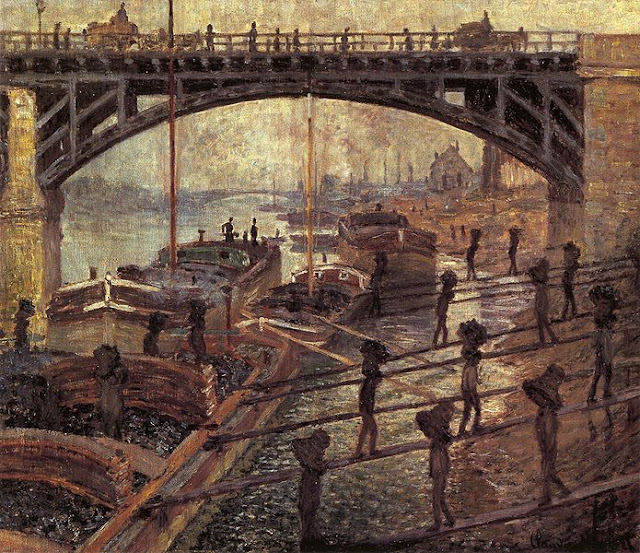 A sunlit day in the countryside around Paris was not how the mass of French people lived during the age of Impressionism. Most worked in a variation, urban or rural, of Monet's Men Unloading Coal. Even white-collar employees labored long, stress-filled hours. The French economy, after a brief revival following the Franco-Prussian War, experienced repeated setbacks and bank failures. For Monet, the late 1870's were a personally bleak period, marked by the death of his wife, Camille, aged 32, in September 1879.


Painted in 1875, Men Unloading Coal is no less a masterpiece for being virtually monochromatic. The handling of light in such somber, depressing conditions was especially brilliant. But it is the "stick-men" figures of "les charbonniers" that make this a haunting work of art. Given such daily drudgery, how could any worker - or person of conscience - be expected to commune with nature?

Following his deathbed portrait of Camille, Monet rarely depicted people in his paintings. When he did, their facial features were sketched on, some faces were left blank.

In 1886, the year of the last Impressionist Salon, Monet visited Belle Île, a rugged island off the coast of Brittany. Here, Monet painted 40 breathtaking works in oil, devoid of all human presence. Three years later, Monet went on a similar expedition to the Creuse Valley in the sparsely inhabited Massif Central region of France. This series of paintings, almost as spectacular as the Belle Île seascapes, again bore no trace of mankind. 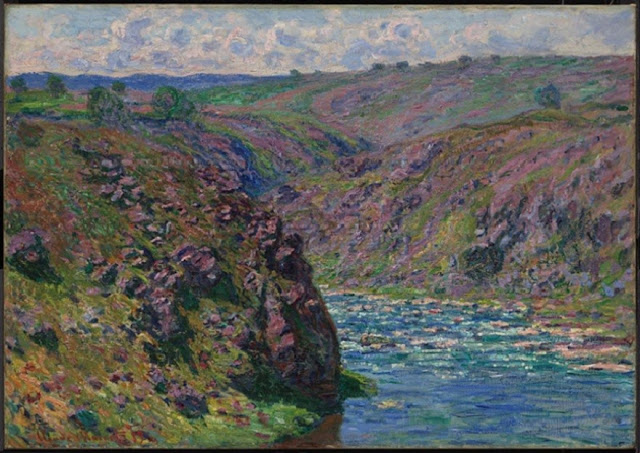 Rubin views these two under-studied series as pivotal moments in Monet's transition to his late, almost abstract, style. At the time these works were created, the paintings were recognizable as being in the "sublime" tradition reaching back to Edmund Burke's theories from the 1700's. The sense of sublime, which had infused and enriched the work of J.M.W. Turner, confronted humanity with our place in relation to the awesome scope and scale of nature.

From our perspective, thanks in no small part to Rubin's insights, we can see the Belle Île and Creuse Valley paintings as stepping stones to the Monet serial works of the last decades of his life: the rows of poplar trees, the humble grain stacks, the looming structure of Rouen Cathedral, the mist-shrouded Houses of Parliament and lastly the Garden of Giverny.

In each of these environments, whether "sublime" coastal cliff or tree-lined country lane, whether medieval edifice or carefully-harvested stack of crops, Monet is tasking himself - and us - to "feel with our bodies."  These paintings are not "step 1, step 2, step 3" documentation of what we see directly before us. Instead, Monet places us in a position to experience reality with all of our senses.

To accomplish this oneness with the surrounding environment and with the universe-at-large, Monet relied upon his intuition. This was a form of subjective insight at variance with the earlier idea that Impressionist artists were on-the-spot "scientific" observers. Monet brusquely dismissed this contention when he lectured an art critic, "You ask my painting to give you an engineer's information. You have come to the wrong address."

Rubin quotes liberally from this and another late career interview. Monet, occasionally, sounds like a cranky curmudgeon. However, Rubin carefully notes the close correlation between Monet's guiding thoughts and the cutting-edge philosophy of Henri Bergson, one of France's leading thinkers. According to Rubin's perceptive analysis:

By looking inward, Monet was seeking to impart an essence to nature that he intuited. Bergson eventually called it elan vital, that is vital force or impetus... I would argue that Monet anticipated it through efforts to express personal sensations in his chosen medium... Seeming to represent a moment in time taken from the world, Monet's painting actually suspends the viewer's time, excerpting her or him from the clock time of reality, resisting it in order to convey the continuity and essence that lives within the individual's body. 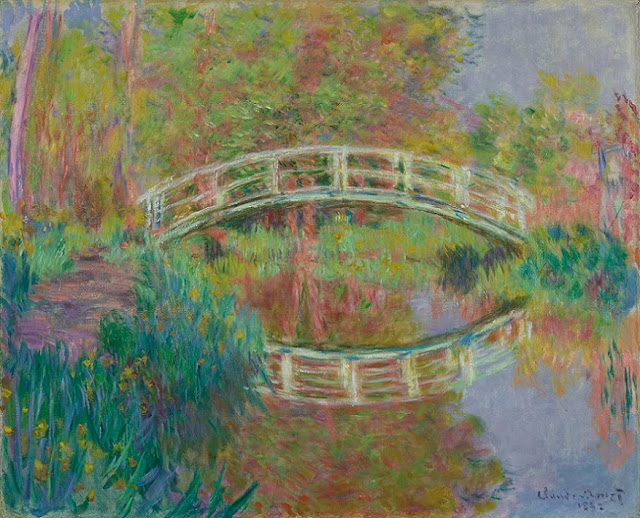 Seen in this light, Monet's meditative, late-career paintings do not merely place us in a position to behold what was revealed to him. Monet's grain stacks and water lilies open the window of the universe to us so that we can experience our own revelation. In reaching out to all of creation through humble objects and sites such as Monet depicted, we are enabled to get in touch with our real, inner selves.

The best compliment I can pay to this wonderful book on Claude Monet is a personal aside. I have yet to make a pilgrimage to Giverny. But if I ever do, I have the "intuition" that I will feel like I have been there already, having read Monet in Thames and Hudson's World of Art series.

Posted by Art Eyewitness at 6:42 AM