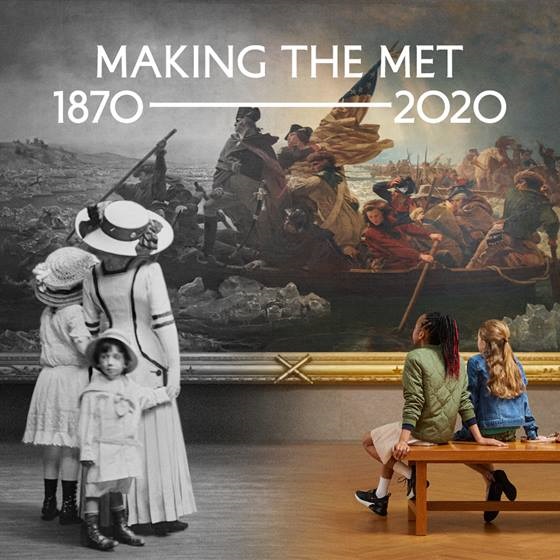 After months of waiting, I am finally able to wish the Metropolitan Museum of Art a happy 150th birthday/anniversary. Back on February 24, I visited the Met for the opening of its newly-restored British Galleries. On that sunny, joyful day, I fully-expected to be sending the congratulations of Art Eyewitness to the Met in April when their festivities were scheduled to commence.

The Metropolitan Museum of Art was founded on April 13,1870. To honor this historic event, staff members of the Metropolitan Museum were putting the final touches on "Met 150" when I visited in February. I could see them at work behind screens and partitions, readying the first of a sensational series of celebratory events and special exhibitions, notably Making the Met, 1870-2020. 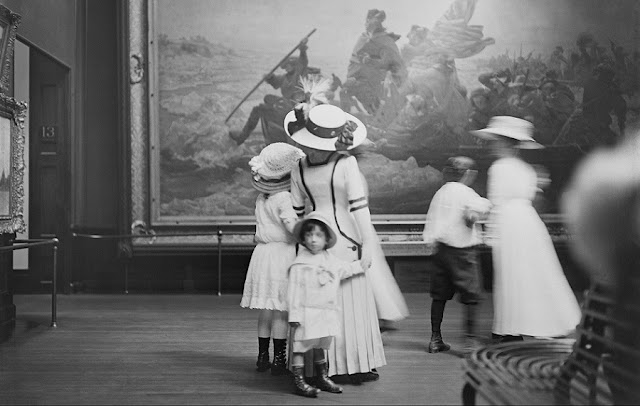 A jaw-dropping logo/image for Making the Met, 1870-2020, a composite of the 1910 photo (above) and a 2020 gallery view, was already posted on the Met's website. I could hardly restrain myself. In anticipation, I pre-ordered a copy of the exhibit catalog, something I rarely do.

On March 13, 2020, Met 150 was cast into limbo by the Covid-19 Pandemic quarantine. Weeks turned into months. The Met seemed cheated of a well-deserved opportunity to observe and enjoy its sesquicentennial.

I am not, usually, a superstitious person. Yet, after thinking about the date when the decision to create the Met was made, I found myself wondering if April 13, 1870 had been a Friday. Had the Met been "jinxed" on the day it was born?

April 13, 1870, I am glad to relate, was a Wednesday. Bad luck is not going to stop the Metropolitan Museum of Art!

And now, the Met has reopened its doors. HAPPY 150th to the Metropolitan Museum of Art. And many, many more!! Making the Met, 1870-2020 is now open to visitors - social distancing, please - with displays of approximately three hundred of the Met's most important paintings, sculptures, works-on-paper, exquisite pieces of jewelry, musical instruments and works from the decorative arts. These have been chosen, not only for their beauty or level of artistry, but also to document the timeline of the Met's development over the century and a half since April 13, 1870.

There are many old favorites on view in the exhibition, but one of the highlighted paintings has taken on a special significance, ironically so. This is Anthony van Dyck's Saint Rosalie Interceding for the Plague-stricken of Palermo. 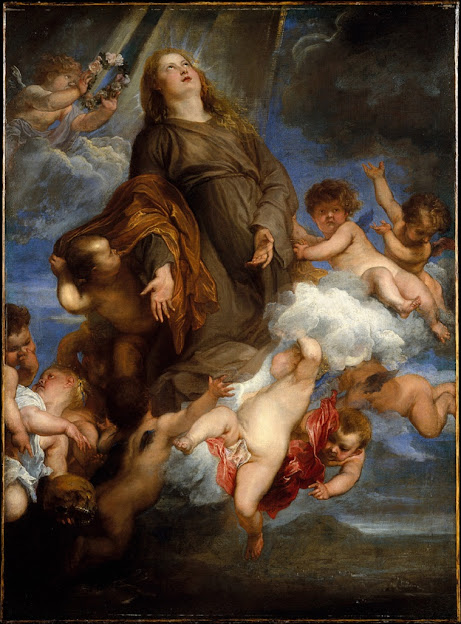 This early van Dyck was painted in 1624, when the young Flemish painter was visiting Palermo. The Sicilian city was suffering from an outbreak of the Plague. The discovery of the tomb of the medieval Saint Rosalie was credited with stopping the spread of disease and requests for paintings of the miracle-working saint were quick in coming. Van Dyck painted this evocative masterpiece for an appreciative Sicilian patron.

Van Dyck's Saint Rosalie was among the very first major works of art purchased for the Met. So important was this van Dyck that it was depicted in the charming painting (shown below) by Frank Waller, Interior View of the Metropolitan Museum of Art when in Fourteenth Street, 1881.

When it was added to the Met's collection, with the accession number 71.41, van Dyck's Saint Rosalie was hailed as a Flemish painting. The early donors and museum staff of the Met were much in favor of acquiring works of art which recalled the Dutch founders of New York back in 1625. Little could they have envisioned the significance of this painting for New Yorkers in 2020. 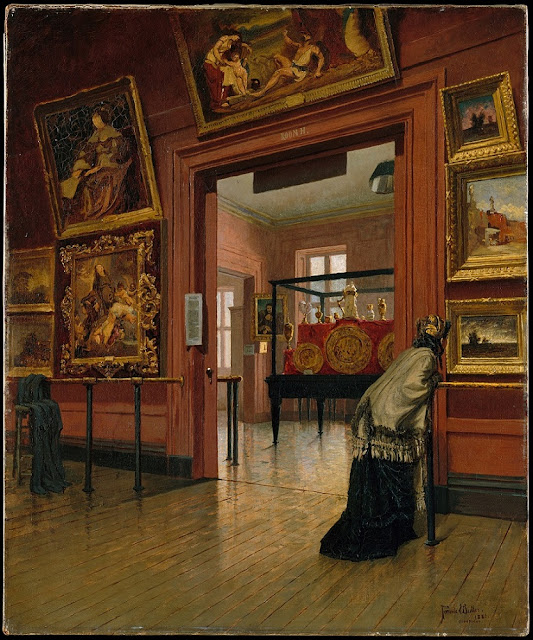 It was over a decade before the Metropolitan Museum of Art opened the doors of its historic Fifth Avenue and 82nd Street main building. Initially, in 1872, the Met's fledgling collection was showcased in a leased townhouse, located at 681 Fifth Ave, between Fifty-Third and Fifty-Fourth streets.

Just over a year later, in March 1873, the Met shifted its operations to a more suitable site, the Douglas Mansion, Fourteenth Street between Sixth and Seventh Avenues. Then, on March 30, 1880, the Met moved uptown to its new, permanent home, designed by Calvert Vaux and Jacob Wrey Mould. 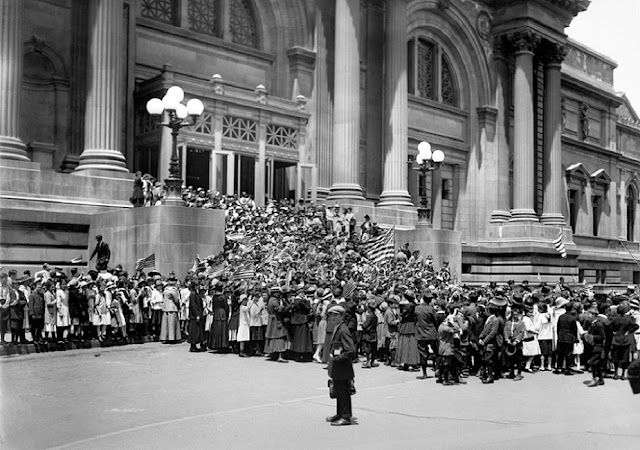 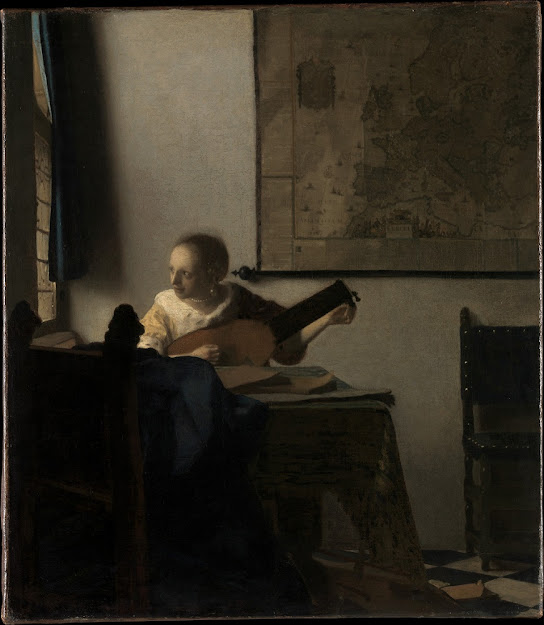 Johannes Vermeer, Young Woman with a Lute (ca. 1662-1663)
©The Metropolitan Museum of Art, New York
The mid-nineteenth century discovery of Johannes Vermeer (1632-1675) was linked to a renewed appreciation of Dutch artists other than Rembrandt. The French art critic, Theophile Thoré, led the way, extolling Vermeer and Frans Hals for their brilliant use of light and unconventional brush work. Young painters, soon to be called the Impressionists, embraced these Dutch masters. So too did the officials at the Louvre - while spurning the Impressionists.
The curators at the just-opened Metropolitan followed the lead of their French colleagues. Initially, they paid little heed to Renoir, Monet, Pissaro and Degas. It was the purchases by American art patrons which saved the Impressionists and their principal dealer, Paul Durand-Ruel, from ruin. And it was a pair of New York art lovers who insured that the Met's collection would eventually include some of the greatest works by the Impressionist painters.
There are so many dedicated and generous art patrons who have contributed works of art and financial endowments, making the Met the great institution it is today. In a class by themselves, however, are Henry and Louisine Havemeyer.
According to the narrative of Making the Met, Henry Osborne Havemeyer (1847-1907) received a misdirected fund-raising letter from the Metropolitan's first director, Luigi Palma di Cesnola. Instead of being angered, H.O. Havemeyer sent a check for $1000, then a princely sum, and asked to be added to the donor list.
Havemeyer, who would go on to found the American Sugar Refinery Company in 1891, married Louisine Waldron Elder in 1883. A passionate art enthusiast, Louisine Havemeyer was a close friend of artist Mary Cassatt. With the sage advice of Cassatt, the Havemeyers began purchasing Impressionist paintings. These included a huge number of works by Cassatt's mentor, Edgar Degas, and Claude Monet's 1869 masterpiece, La Grenouillère. This work, along with Renoir's version of the same scene, can lay claim to being the first Impressionist painting, created five years before the name for the movement was proclaimed. 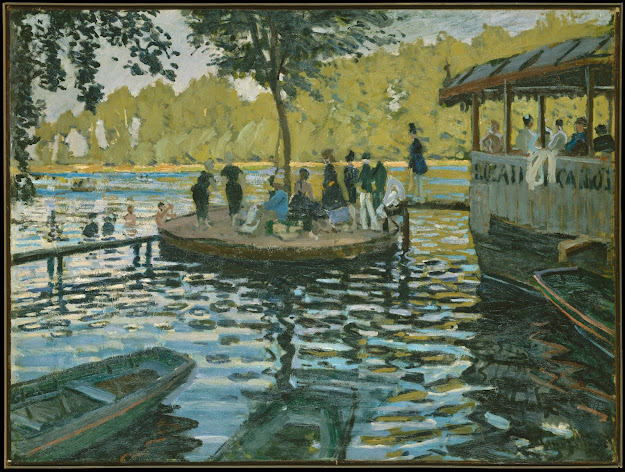 Claude Monet, La Grenouillère, 1869
©The Metropolitan Museum of Art, New York
H.O. Havemeyer's taste was very eclectic and he was a more impulsive buyer than his wife. Perhaps surprisingly for a Gilded Age tycoon, he favored hand-blown glass vases by Louis Comfort Tiffany and Japanese prints, including the now iconic The Great Wave off Kanagawa. 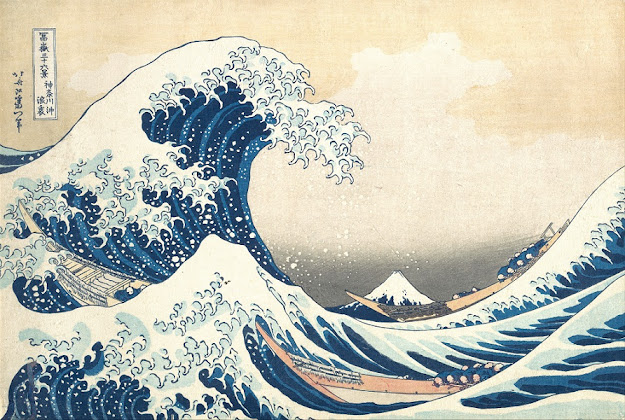 Katsushika Hokusai, The Great Wave off Kanagawa,
ca. 1830 -1831 ©The Metropolitan Museum of Art, New York
The Havemeyer collection is well represented in Making the Met. However, to get a real appreciation of the works which the Havemeyers bequeathed to the Met, a separate exhibition would be needed. In fact, the Met mounted such an exhibit in 1993, aptly titled A Splendid Legacy. An archival photo from the exhibit provides a sense of the quality and scale of the Havemeyer collection.
When Mrs. Havermeyer died in January 1929, the Met received a staggering bequest of 1,967 works of art, including two hundred masterpieces of French nineteenth century painting. Mr. Havermeyer's beloved Tiffany glass collection had already been bestowed upon the Met and the Havermeyer's children and grandchildren were to give further works of art. 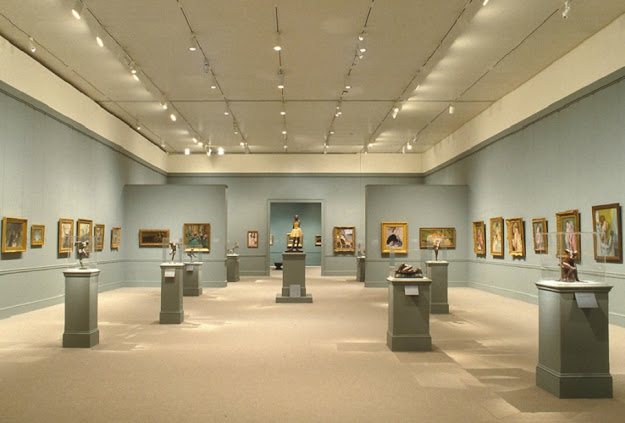 Gallery view of the Splendid Legacy exhibition at the Metropolitan Museum of Art. © The Metropolitan Museum of Art, New York
It's no exaggeration to compare the Havermeyer Collection at the Met to the treasures of Pharaoh Tutankhamun. Yet, Henry and Louisine Havemeyer did much more than amass a trove of world-class art. They set a moral tone in the American art world and in the United States at large. Their generous philanthropy stood in marked contrast to the "conspicuous consumption" of other Gilded Age aristocrats.
Writing to her children, later in life, Mrs. Havemeyer confided,"never forget how blessed you are and when an opportunity arises, try to equalize the sum of human happiness and share the sunshine you have inherited."
This socially-conscious attitude is reflected in the sense of mission of the Metropolitan Museum of Art, both in its day-to-day operations and in the Met's proactive role as a New York City museum and as one of the greatest cultural institutions of the United States. And never is the Met's "mission" better served than in times of crisis.
When the United States joined the struggle against Hitler's Reich, a number of Metropolitan staff members served in the Monuments, Fine Arts and Archives Section (MFAA). The "Monuments Men" searched and saved many of the art treasures looted by the Nazis. Met 150 highlights the contributions of James Rorimer, the curator of the Metropolitan's medieval art collection at the Cloisters, who played an especially important role in the MFAA. Rorimer later became the Metropolitan's director from 1955 to 1966. 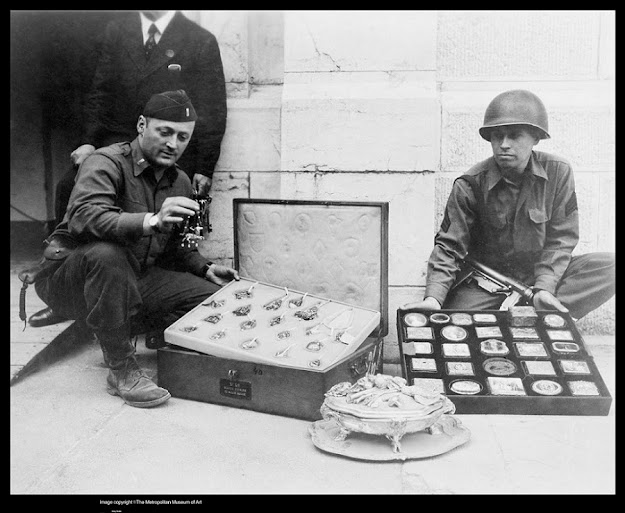 U.S. Signal Corps. photo of Lt. James J. Rorimer (left), May 1945
Courtesy of the Metropolitan Museum of Art
The famed "Monuments Men" detachment included several "Monuments Women." One of these courageous curators, Rose Valland, provided crucial assistance to James Rorimer. An art historian at the Galerie Nationale du Jeu de Paume, Valland remained in Paris during the Nazi occupation. Valland spoke German and was able, by listening to the conversation of Nazi officers, to keep a detailed record of the art works consigned for shipment to the Reich. When Rorimer reached Paris after D-Day, Valland passed this vital information to him. 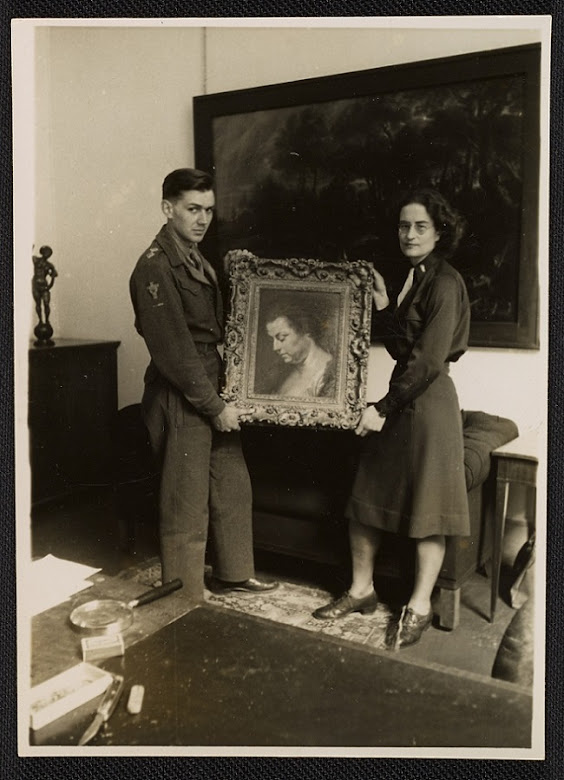 Capt. Edith Standen (right) at the Central Collecting Point Wiesbaden
Courtesy of the Archives of American Art
Also of note, Edith A. Standen, later curator of European tapestries at the Met, served as the temporary commanding officer of the Central Collecting Point in Wiesbaden, Germany. There, tens of thousands of works of art were sorted and cataloged prior to being restored to their owners. When the U.S. Army determined to send 202 German-owned paintings to the U.S. for "storage," Standen and thirty-six other MFAA officers signed the Wiesbaden Manifesto. They protested against "the removal for any reason of a part of the heritage of any nation even if that heritage may be interpreted as a prize of war."
In 1948, the paintings were returned to Germany. This display of moral courage by Standen and the other Monuments "Men" is a rare event in history. It is, however, a deed in keeping with the Met's high standards as the caretaker of "5000 years of history." 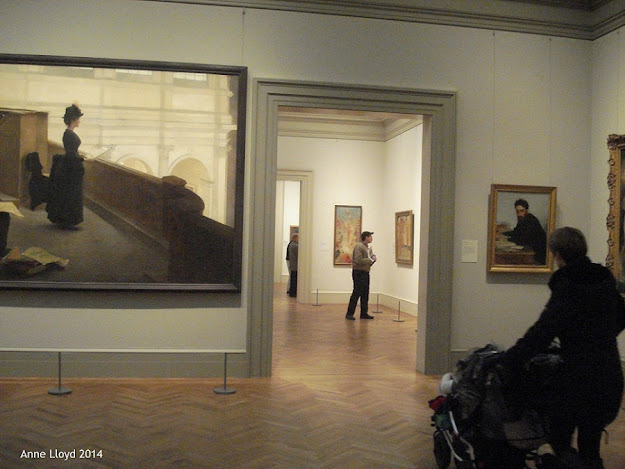 Anne Lloyd, Photo (2014)
Gallery view of the Metropolitan Museum of Art
I have been visiting The Metropolitan Museum of Art regularly since the late 1970's. From a fairly circumscribed interest in nineteenth century art, my awareness and appreciation of the totality of human achievement has expanded through the tremendous efforts of the Met's curators and the talented, dedicated staff who support them.

The Met has become a second home for me. It has been the site of so many happy, enlightening moments in my life, I can hardly begin to count! 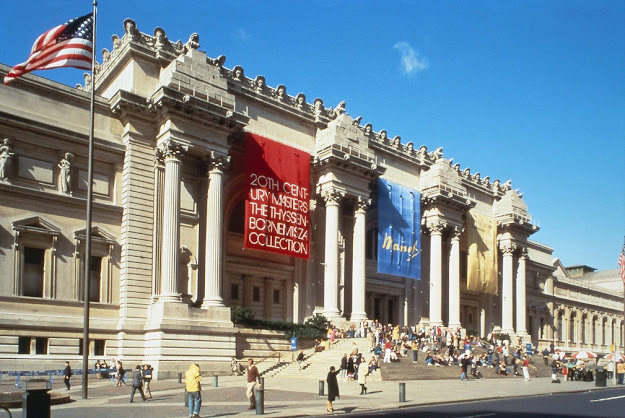 The Metropolitan Museum of Art is a place for nurturing the heart, as well as enjoying great art. What a blessing this incomparable institution is, for me and for art lovers from around the world!

Posted by Art Eyewitness at 7:34 PM