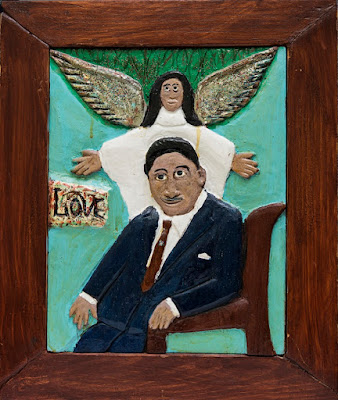 According to the strict, tightly focused definitions of art scholarship, Elijah Pierce (1892-1984) was a "self-taught" artist. This categorization is essentially correct - but not entirely. The African-American wood carver, whose works are featured in a major retrospective at the Barnes Foundation in Philadelphia, certainly learned by doing. He did, however, receive a little help.

When he was still a youth, Pierce's uncle, Lewis Wallace, taught him the basics of wood carving - nothing fancy, how to use a pen knife and a chisel, which remained Pierce's "go-to" tools. Later, during the 1920's and 30's, Pierce's wife, Cornelia, helped paint his carved scenes and figurines. She, also assisted him in presenting touring displays of his art in the American South and Mid-West states.

And then, there was the direct inspiration Elijah Pierce received from God Almighty.

Pierce was a devout Christian and a gifted preacher. He emphatically stated that God spoke to him and he felt compelled to carve a message from "on high" repeatedly in his sculptures: your life is a book and every day is a page. 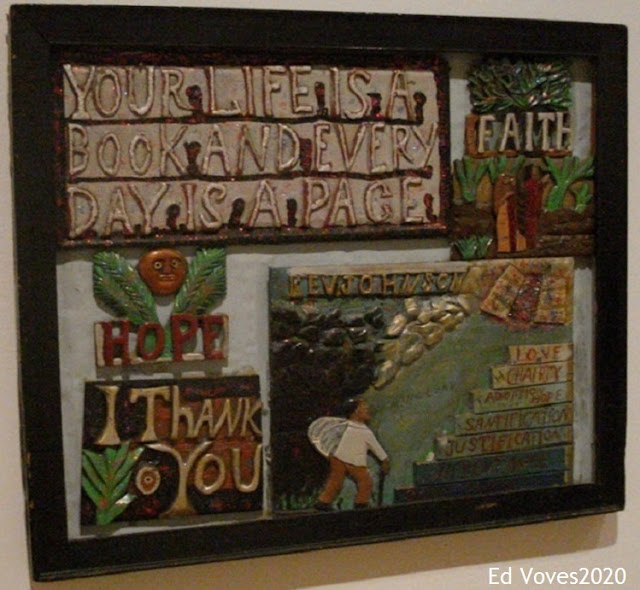 Pierce felt God's hand as well as heard His voice. He experienced at least three divine interventions in his life or "conversion experiences." One involved a near-death encounter, which took place around 1917. According to Pierce, he was struck speechless, apparently dead, after reaching for a Sears, Roebuck catalogue when he should have been reading the Bible.

In a 1979 New York Times interview, Pierce recalled the incident as God's way of "just showing you my power." Pierce told Gaylen Moore of the Times:

The house was full of people, screamin' and cryin'. They said I was dead. I didn't feel any pain. I just went out like the sun going behind a cloud. Then I came back. Since then, I'm afraid of the Lord... Every piece of work I carve is a message, a sermon. My carvings are all preaching one important message. It's what Jesus taught us when he was here on earth: Love ye one another. If I love you and you love me, I won't do you any harm and you won't do me any harm.

Pierce had enough brushes with danger to always value the precept of "Love ye one another." He narrowly avoided death while working on a railroad construction crew, but the real peril he faced came from a white mob in 1912. Returning to his home in Baldwyn, Georgia, after playing a game of baseball in Tupelo, Mississippi, Pierce was arrested and falsely accused of murder. Fortunately, he was exonerated and, acting on advice to travel by back roads to avoid vengeful "regulators," he reached safety.

A half-century later, Pierce carved a powerful depiction of the event. The episodic treatment of the incident recalls great narrative sequences in art history like ancient Egyptian wall paintings or the bas-reliefs of Trajan's Column in the Roman Forum. Deceptively simple, Pierce's carvings also evoke the hugely-popular Sunday comic pages of American newspapers. 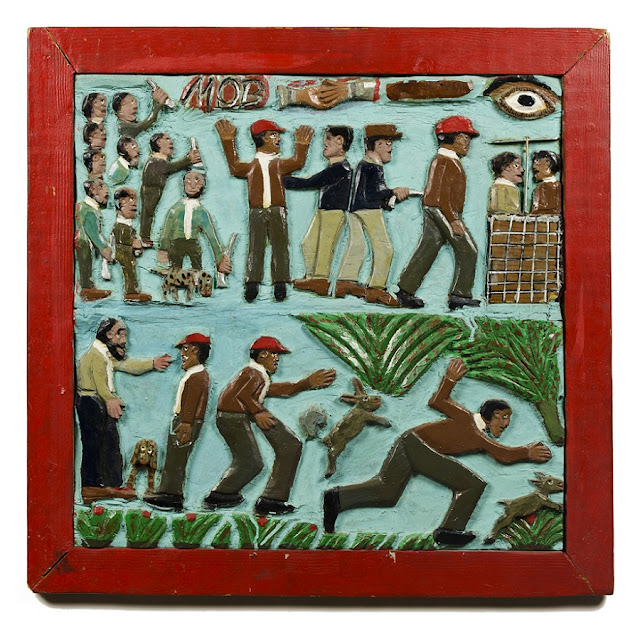 However interesting these parallels with other art forms are, Elijah Escapes the Mob needs to be appreciated as a primal expression of the artist's lived experience - and belief. The symbols carved at the very top of Elijah Escapes the Mob raise the unfolding drama beyond a lucky escape to the portrayal of an act of redemption.

Like all good story-tellers, Pierce became adept at keeping "the story going." The same is true for preachers of God's word and Old Master artists: expand the scope of the tale in order to drive home a powerful message or moral.

Pierce found a way to link carved scenes such as Elijah Escapes the Mob to achieve a truly epic style. He created panels presenting multiple episodes of vivid imagery. These, much like the Stations of the Cross which appear in Roman Catholic churches, illustrated incidents from sacred scripture in an episodic manner. Some were joined with metal hinges to create a diptych. The Barnes exhibition has one of these amazing diptychs on view. 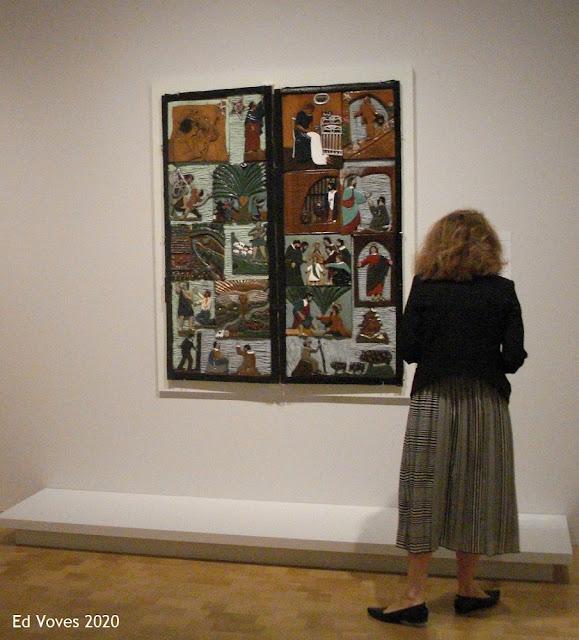 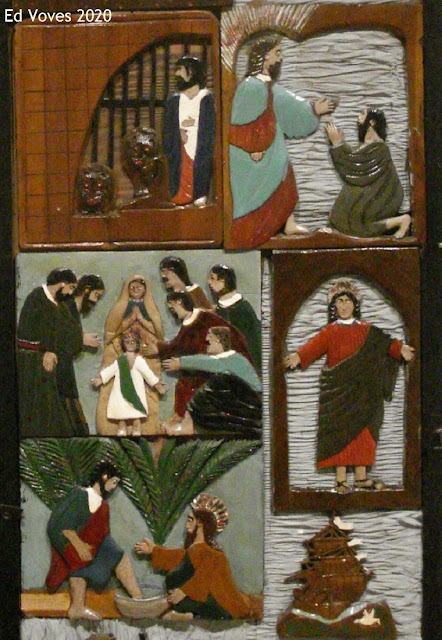 Interestingly, a similar approach to visualizing narrative was being innovated by artists for Hollywood studios during the 1930's, at the same time Pierce was carving his depictions of Biblical events. Webb Smith of the Disney Studio and William Cameron Menzies, art director for Gone with the Wind, drew illustrated storyboards to plot the sequential flow of motion pictures.

Very few of Pierce's panels have been preserved. Most of them were disassembled so that the individual carved scenes could more readily be collected. The greatest example of Pierce's multi-scene oeuvre, however, did survive and it is a jaw-dropping sensation: The Book of Wood. 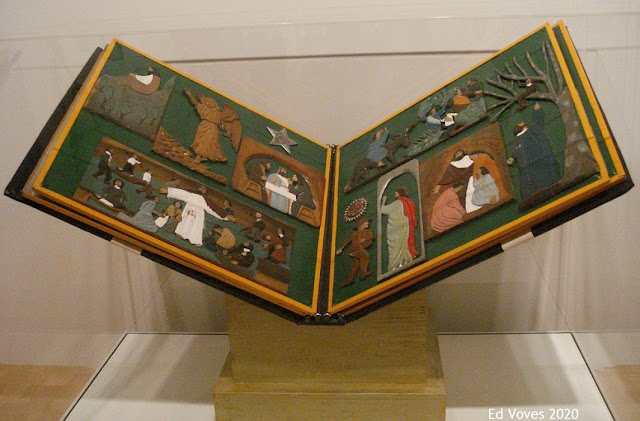 The Book of Wood was created in 1932, the nadir of the Great Depression, when Pierce, a talented barber, often faced unemployment. He carved thirty-three scenes depicting the life of Jesus, at the behest of his wife Cornelia. These were mounted on massive cardboard "pages" and bound to form a truly, one-in-a-kind testament.

Initially, Pierce “thought it was the dumbest thing I ever heard of.” But his wife - and God - thought differently.

Elijah and Cornelia Pierce took The Book of Wood on tour during the 1930's and 40's. The stunning, pictorial volume provided a visual counterpoint to Pierce's sermons to evangelical Christian congregations. The Pierces raised some modest funds from these tours, enough to keep body and soul together during these difficult years.

Sadly, Cornelia Pierce died from cancer in 1948. Elijah Pierce kept The Book of Wood on display in the barbershop in Columbus, Ohio, which he was able to establish in 1951 after years of working for other entrepreneurs. Now in the collection of the Columbus Museum of Art, The Book of Wood is an authentic expression of religious faith and of artistic skill.

Pierce also carved individual figures and sculptural tableaux. The subject matter was largely drawn from the Bible, including Abraham's sacrifice of Isaac and the Crucifixion of Jesus. These were notable incidents of anguish and pain, ultimately redeemed by God's intervention, saving Isaac at the last minute and empowering the Resurrection of Jesus. 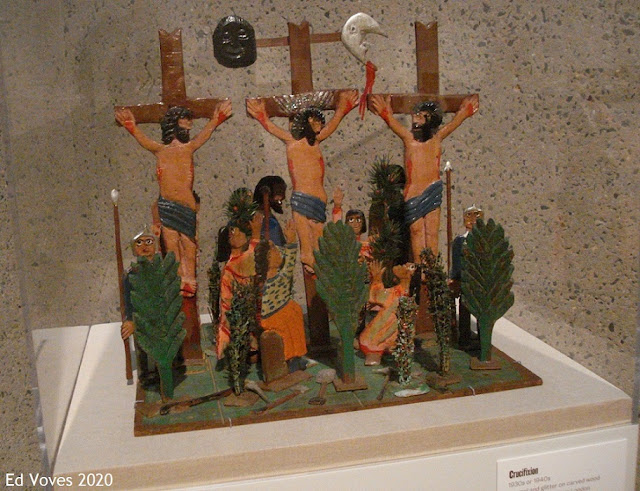 Ed Voves, Photo (2020) Elijah Pierce's The Crucifixion, c. 1930-40
Elijah Pierce's own time of troubles and triumph coincided with the Great Migration of African-Americans to the industrial North and Midwest during the first half of the twentieth century. Pierce joined the Great Migration, eventually settling in Columbus, Ohio. Ironically, for a young man who hated farm work, Pierce created several idyllic depictions of the rural South of his childhood. 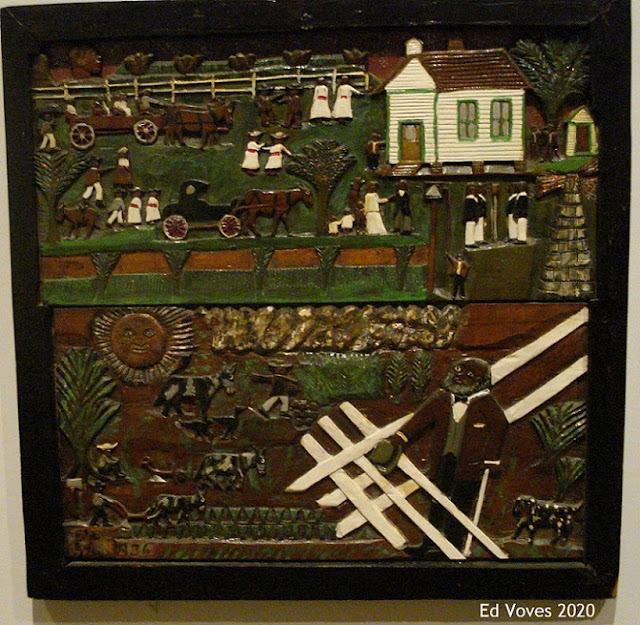 Ed Voves, Photo (2020) Elijah Pierce's The Little White Church, 1936
The "Black Belt" of the Southern states was hardly a "paradise lost." Pierce was a sober realist, with sense of humor sharpened by experience. His art reflects this great social transformation, ranging from humorous figurines burdened with bundles of possessions dangling from a traveling stick to searing social commentary.
Pierce's Presidents and Convicts, created in 1941, depicts an actual event in his life. Traveling back to Georgia, Pierce witnessed  a chain-gang of convicts pressed to hard labor on road work. Although not limited to African-American prisoners, the chain-gang system represented a special threat as African-Americans could be arrested on the most trivial and unsubstantiated charges and sentenced to years of harsh and degrading work. For Pierce, who barely escaped conviction, this was a nightmarish reality impossible to forget. 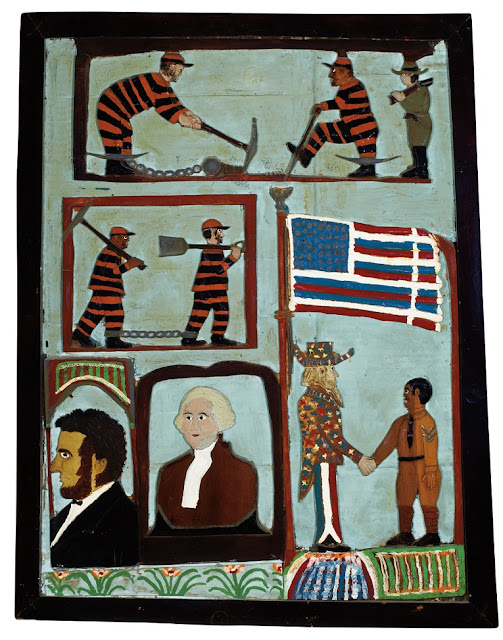 Elijah Pierce, Presidents and Convicts, 1941
Later in life, Pierce carved portraits of Rev. Martin Luther King, Jr. President John F. Kennedy, sports heroes Joe Louis and Hank Aaron and others. Pierce used images from the major magazines of the period, Life, Look and Ebony, as his source material for these carved portraits.
As can be seen with the introductory image of this review, depicting Rev. King and an angel, accurate likenesses were not Pierce's strong suit. Spiritual resonance and character strength, however, make their presence felt almost immediately when you view these remarkable works of art. 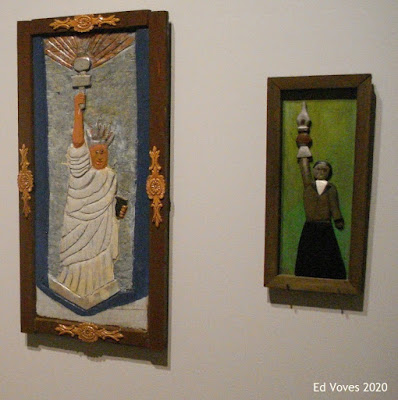 Ed Voves, Photo (2020)
Gallery view of Elijah Pierce's America, showing
The Statue of Liberty, 1973, and Spreading the Light, 1933.
This is notably the case, in the side-by-side presentation of Pierce's portraits of Harriet Tubman and the Statue of Liberty. As a physical resemblance of the great heroine of the Underground Railroad or an accurate depiction of Lady Liberty, these works may appear "naive." In fact, they are sincere affirmations of the foundational values of American society.
Pierce labored most of his life in obscurity. Fortunately, he was "discovered" in 1971 by Boris Gruenwald, a graduate student at Ohio State University, who mounted an exhibition of Pierce's work at the OSU art gallery. Following this breakthrough, Pierce exhibited his art at the National Museum of American Art and the Museum of Modern Art in New York. Two years later, Pierce received the first prize at the International Meeting of Naive Art in Zagreb, Yugoslavia. In 1982, the National Endowment for the Arts awarded him a National Heritage Fellowship. Pierce died on May 7, 1984.
Elijah Pierce was truly an artist of genius. Yet, it is important to place him within the ranks of remarkable African-American artists who were his contemporaries. These included entirely self-taught artists like Bill Traylor or self-directed ones like Augusta Savage, who received formal training after clearly demonstrating her talents. Together with stone carver William Edmundson, painter Minnie Evans and others, these African-American artists brought traditional skills, religious convictions and social values to the dialog which reshaped American society for the better during the twentieth century. 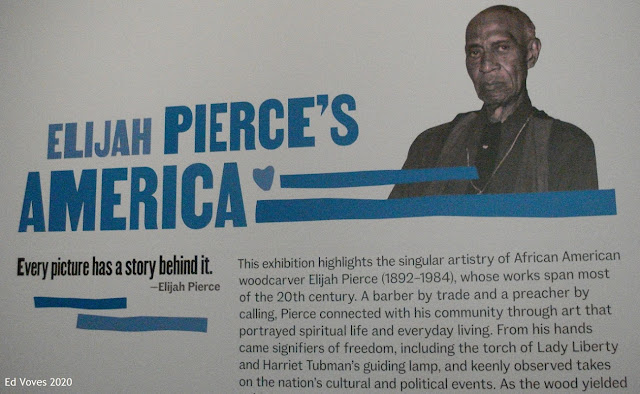 Ed Voves, Photo (2020)
Exhibit wall-text for Elijah Pierce's America at the Barnes Foundation
Special praise - in this troubled century - needs to be accorded to the art curators who planned and organized Elijah Pierce's America. Nancy Ireson of the Barnes Foundation and Zoe Whitley, Director of the Chisenhale Gallery in London, somehow managed, under incredibly difficult circumstances, to mount this outstanding exhibition in the midst of the Covid-19 pandemic. 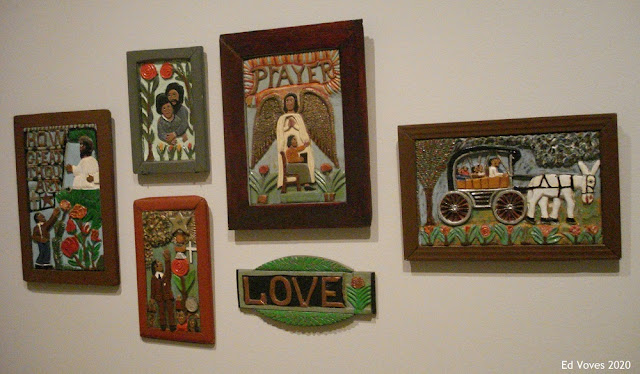