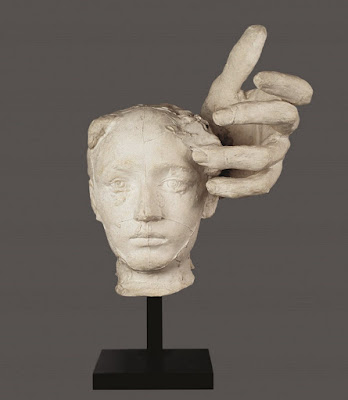 Shaping the World
Sculpture from Prehistory to Now

Sculpture was the first art form to go "public." With the Neolithic revolution twelve thousand years ago, the brilliant, yet secluded, cave paintings of Lascaux and other sites no longer satisfied the human compulsion to create images. Homo sapiens needed to represent their spiritual aspirations and physical prowess in new settings.

Hunter-gather peoples, all over the globe, abandoned their wandering life styles to live in fixed settlements. To mark their presence and invoke the protection of their deities, they created carefully sited arrays of megaliths like Stonehenge, free standing statues or scenes carved in relief.

The message of these Neolithic sculptures is clear:

We are here. The gods are with us.

Sculpture in antiquity was part of a dialog of people living in changed and ever-changing physical environments. This dialog, continuing in today's world, is the focus of a brilliant new book from Thames and Hudson. Shaping the World features an extended discussion between British sculptor Antony Gormley and the noted art historian Martin Gayford. Together, they present an incisive and expansive survey of sculpture across space and time.

Beginning with cave artists, Gormley and Gayford note the way that the contours of stone walls and even the scratch marks of bear claws were utilized to create a sense of mass and volume for cave art. In the wake of the Neolithic Revolution, artists created wooden sculptures like Native American totem poles (which continued to be carved into historic times) and raised monumental edifices like the man-made mountain in England known as Silbury Hill. With such astonishing works of art, ancient artists evoked the sacred rituals which had earlier taken place in the recesses of Lascaux and comparable sites around the world. 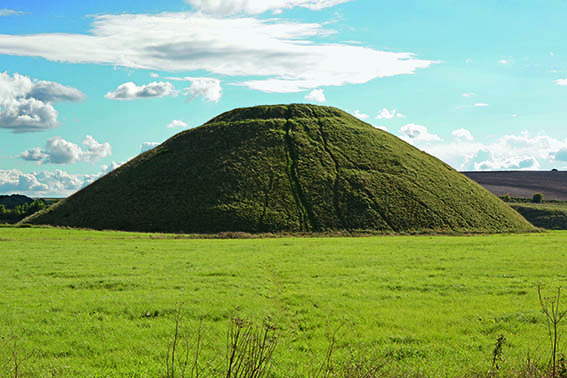 In some cases, as with the Newgrange shrine in Ireland and its inner tomb chamber, these first artists recreated the very caves which their ancestors had utilized as the inner sanctums of their worship.

Many modern artists, including Gormley, are tracking the long-ago footsteps of their Neolithic predecessors in practice and in spirit. Gormley's Cave, described as "a vast cluster of cuboid voids with irregular facets, set as if at random angles one to another" was featured in the galleries of the Royal Academy in London. This "Sculpture on the scale of architecture" is a telling example how artistic self-expression and re-discovery are constant companions. 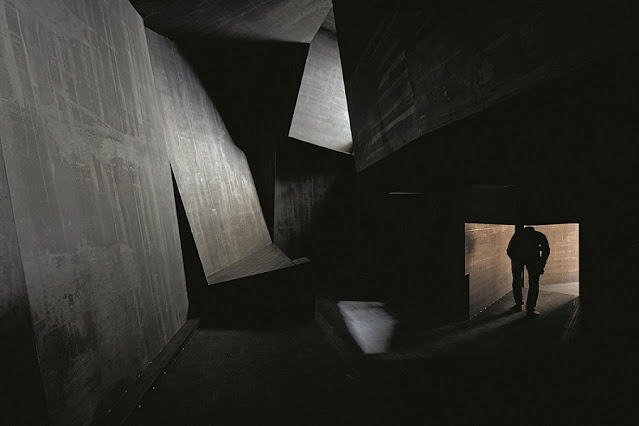 Following such insights on "deep" antiquity, Gormley and Gayford proceed to examine, consider, debate and - not infrequently - disagree on every major form of three-dimensional art. 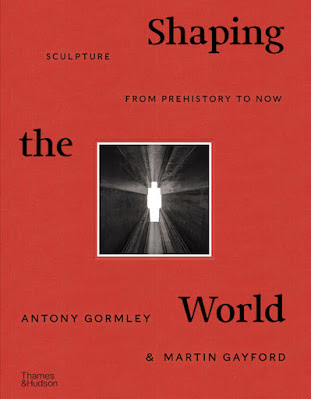 It needs to be acknowledged that, yes, Shaping the World is a staged debate. A major book could hardly be otherwise. Gormley and Gayford, however, are too passionate, too dedicated to human creativity to allow their enterprise to descend to the level of aesthetic lawn tennis.

When Gormley (AG) delivers a "backhand" volley to a remark by Gayford (MG), you better believe he means it. Likewise, his "opponent" is not going to be easily dissuaded. Here's is a sample exchange in their debate on the art of  uber-modernist, Tino Sehgal.

MG I must admit that's the point at which I get lost: when art completely ceases to be visual. I thing we are coming to the boundary of where sculpture is merging into something else - and definitely something that cannot be illustrated in a book.

AG But that's the whole point! This is a space and time of art revitalizing human exchange and awareness without the need for an object.

MG I can cope with the loss of the object, but I'm afraid I struggle without something compelling to look at.

The issue at stake in this instance was the gallery setting, in this case a darkened room. Most of us, like Gayford, appreciate seeing art works in well-lighted galleries. Gormley might be playing "devil's advocate" here, but he and Gayford discuss intriguing issues such as the relation of a work of sculpture to the area surrounding it or the empty space or "void" within it.

Sculpture can be created from a wide-range of materials - wood, stone (marble especially), various metals, clay, modern synthetic substances - but most three dimensional works of art share a vital point in common. They are usually made for a specific location. This serves as their "natural habitat" as the jungle does for a tiger. 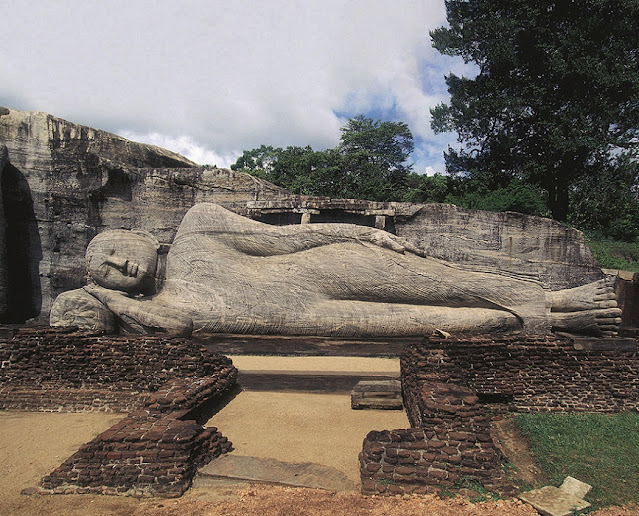 Parinirvana Buddha, Sri Lanka, 11th–12th century
Photo credit: Pierre Vauthey/Sygma/Getty Images
Measuring forty-six feet, the Parinirvana Buddha was carved from living rock. It is a sublime work, entirely at peace with its surroundings in Sri Lanka. Yet, if it were removed from its "habitat" and somehow moved to another site, even one which could accommodate its monumental size, it would be woefully out of place.

What is true for the Parinirvana Buddha, applies to sculpture in general, as Gayford comments:

... the surroundings are part of the meaning. A sculpture of a saint on an altar has a different meaning from one in a glass case at the Victoria and Albert Museum, even if they look exactly the same. One is an object to pray in front of, the other is something to examine for its beauty or historical interest.

An example of removing a statue from its "habitat" involves one of the most iconic of all sculptures, Michelangelo's first Pietà, created in 1499. Superbly crafted, with a highly polished surface, this Pietà was originally placed in a chapel lit by a skylight. The effect must have been dazzling, with a beam of light surrounding the statue in a heavenly glow. Now housed in a Vatican museum with modern electric lighting, the numinous quality of Michelangelo's early masterpiece is greatly reduced.

Michelangelo worked on a second Pietà, with himself posing as Nicodemus, and a final version, the Rondanini Pietà, begun in 1552 and left unfinished at his death in 1564. One might say, that the aging Michelangelo liberated the souls of this statue group, rather than their bodies, from the encasing marble. 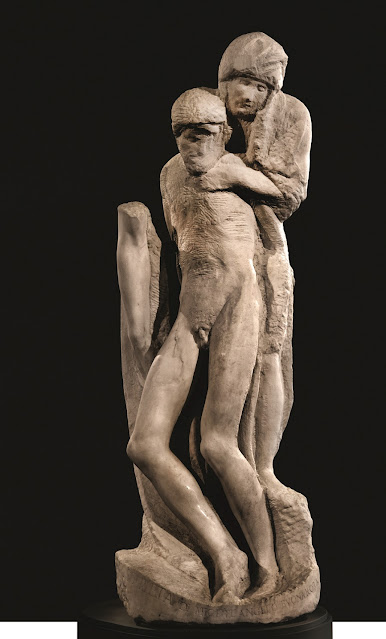 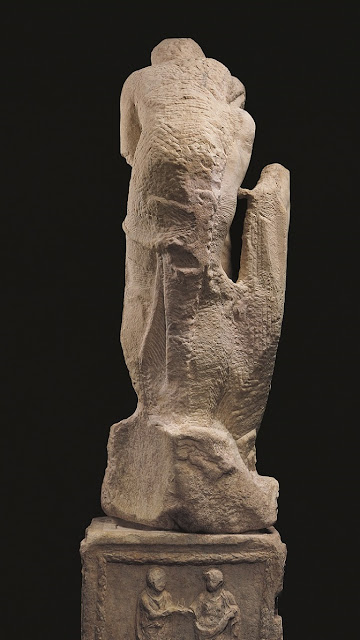 Michelangelo, Rondanini Pietà, c. 1552–64
Photo © Abbrescia Santinelli – f2f studio
When viewed from the back, however, the Rondanini Pietà looks as if it had just been been given a "roughing out", after being excavated from the quarries. Looks are deceiving. Michelangelo worked on this piece for years. What we see here is an artist communing with the raw material of his craft, which just happens to be one of the primal elements of creation, earth.
Here is Gormley's moving commentary on the Rondanini Pietà:
The block ends as a sliver of marble - an eroded nugget of rock in which living and dying cohere. It is a testament to the sculptor's belief that sculpture could carry in itself a feeling otherwise inexpressible. The tottering insubstantiality of this stela; and the fact that it is a residue, a left-behind, ever-unfinished thing, is what gives it its power to move us. Here, long before Pollock or Serra, the results of direct action become the subject of art as well as its means.
The above quote gives a good idea of the insight and empathy which Gormley and Gayford accord to the great sculptors of past and present. Cogent commentary is accorded to Auguste Rodin, Henry Moore, Alberto Giacometti and other familiar figures. Less well known talents get their due, the Italian nineteenth century sculptor, Melardo Rosso being a notable example.
Gormley and Gayford discuss the effort of contemporary artists to adjust the focus of art from the exclusive setting of museums and galleries. They seek to shift it back to the shared environment of people where they live and work.
In a way, the situation faced by our great museums is a repeat of the Neolithic Revolution. Museums - especially in the wake of Covid-19 - face the dreadful prospect of becoming like the once-sacred caves of Lascaux and Chauvet after the hunter gatherers had migrated to villages in the rising agricultural zones.
Gormley has dedicated much of his impressive sculpture making to help reintegrate art into the everyday world. His array of iron figures, entitled Another Place, set-up in a tidal area on the English coastline, recalls the paintings of Caspar David Friedrich. These anonymous, rather frightening figures also provide us with sobering reminders of our mortality. 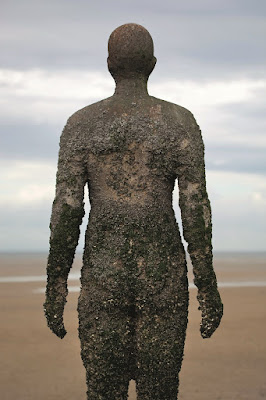 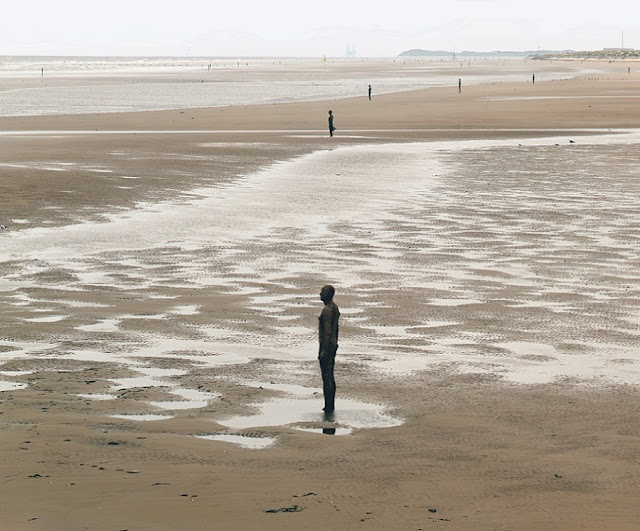 Antony Gormley, Another Place, 1997
Photo Credit: A Sefton Metropolitan Borough Council Commission Photo: Stephen White
These iron men, as they rust and disintegrate, become more sympathetic figures, less intimidating, more more inspiring. Battered by the daily assault of the sea, the figures of Gormley's Another Place continue to stand. One day, one-by-one, they will fall, but not just yet.
Others may disagree with such a favorable assessment. The didactic emphasis of such works, displayed in public, could easily become a form of authoritarian propaganda. I, for one, am uneasy about some of the possible implications of Gormley's assertion that art is "about complicating things and about providing the mind with alternative avenues of thought and feeling, and has to be confrontational."
Art and time, I believe, have a way of restoring a sense of balance to life that does not require constant stage-managing. Gormley and Gayford discuss in some detail how the awesome monuments of ancient potentates like the statue of Ramses II (below) have been brought "down to earth" by the unstoppable march of the centuries. 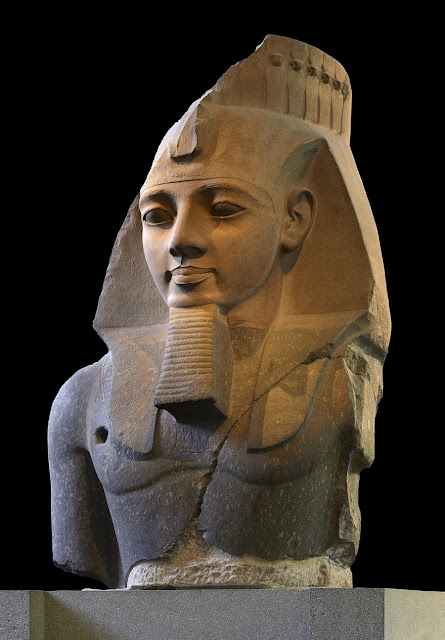 The Younger Memnon (Rameses II), 19th Dynasty, c. 1270 BCE
Percy Bysshe Shelley's Ozymandias used such sculptural debris from fallen empires as its subject. To many European aristocrats during the early decades of the nineteenth century, Ozymandias was indeed a "confrontational" poem and therefore an excuse to implement evermore censorship and repression.

It is better to emphasize the other words of Gormley's statement on the role of art, namely its opportunity to provide "the mind with alternative avenues of thought and feeling."

That is exactly what Gormley and Gayford do in their refreshing and insight-filled book.