Art Eyewitness Essay: A Turner Sunset Outside Our Window 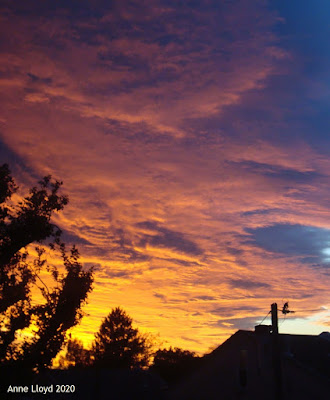 An Art Eyewitness Essay
A Turner Sunset Outside Our Window

All true artists share an essential, defining attribute: they live and work in "the moment."  Their vision of the "now" before their eyes must be truthful - truth as they see it. Whether they aim to make a preparatory sketch or create a work of art which will stand the test of time, they must first honestly depict their chosen subject.

For all artists - painters, sculptors, photographers, ceramic artists - their chosen medium does not ultimately decide the value or validity of their creations. Being true to the moment of inspiration is what matters.

A few evenings ago, I experienced a compelling demonstration of the truth of the above.

A little after 6 pm, my wife, Anne, noticed that the sky was being transformed by several bands of color, yellow, pink, light-orange. Anne was looking out from our bedroom window, but to get a really good look at a sunset from our house, you need to go to the westward-oriented front windows. 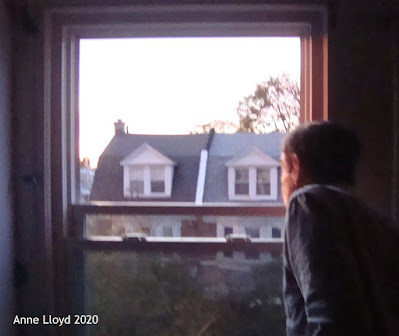 As I got up to go and take a look, I recall commenting that the sunset looked to be like a painting by Mark Rothko. I was wrong. What I saw outside our window was a stunning skyscape worthy of J.M.W. Turner. 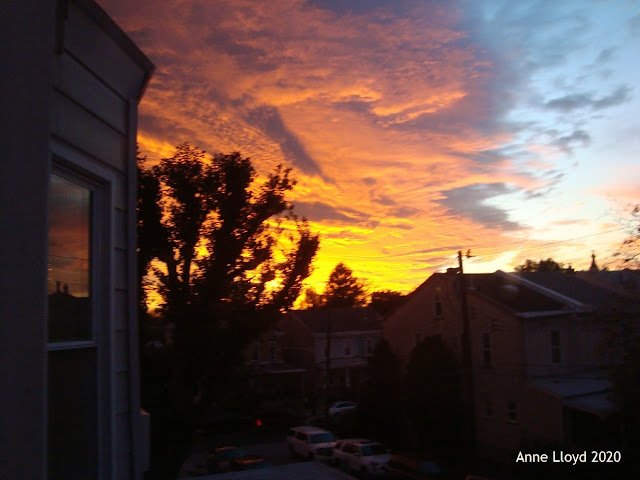 To call the sunset "magnificent" was an understatement. "Turnerian" is more appropriate. It was quite simply a color-drenched masterpiece, created by nature, but worthy of the brush of the great J.M.W. Turner (1775-1851). I alerted Anne and she began to take a sequence of photos which explored all the nuances of the spectacle, including the reflection of the sunset on the window to the left.
Had Turner been there with us "in the moment," there is no doubt that he would have conceived the blazing spectacle as a fit subject for a major work. That is just what he did in 1810 when he observed a storm sweeping over the hills and moors of Yorkshire. The result was one of the key paintings of his career. 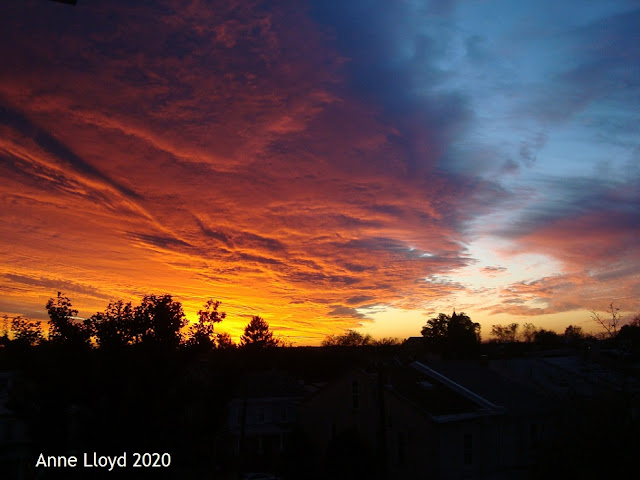 Turner closely observed the storm clouds, making quick notations on the back of a letter. When he was finished, Turner exclaimed to the young son of his great patron, Walter Fawkes, "There, Hawkey, in two years you will see this again, and call it Hannibal crossing the Alps." 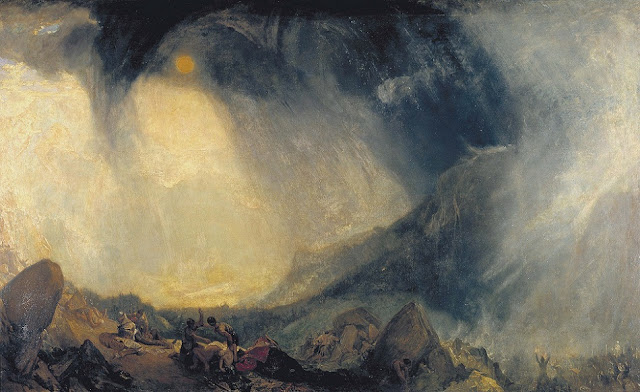 J. M.W.Turner,
Snow Storm: Hannibal and His Army Crossing the Alps, 1812
Turner declined the use of the "Hawkey's" sketch book to record the dramatic weather effects. While Turner did drawings and water colors, on the spot, as an aide memoire for works to be created later in his studio, he often preferred seemingly "slap-dash" notes and cursory sketches. Turner lived and worked "in the moment," preferring to register the scene in his prodigious memory.
Turner commented on his working method in a note for a lecture he gave around the same time as he began painting Hannibal crossing the Alps.
In our variable climate where the seasons are recognizable in one day, where all the vapoury turbulance involves the face of things ... how happily is the landscape painter situated, how roused by every change of nature in every moment, that allows no langour even in her effects which she places before him, and demands most peremptorily every moment his admiration and investigation, to store his mind with every change of time and place. 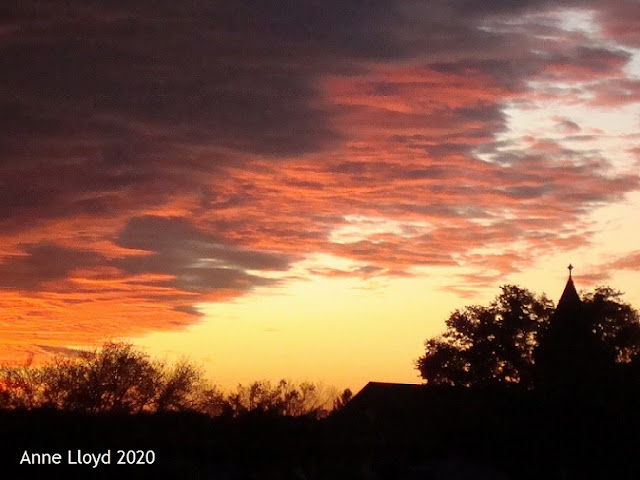 As Anne responded to the dazzling light show in the sky before us, I started wondering how to use her photos as the basis for an Art Eyewitness post.
Turner had actually been on my mind before the "Turnerian" sunset outside our window. Tate Britain had just opened a major exhibition, Turner and the Modern World on October 28th. The exhibition is slated to make two appearances in the U.S., including the Museum of Fine Arts in Boston. Yet, after being opened for less than a week, the exhibition has been suspended as the Tate and other London museum have closed again due to a renewed upsurge of Covid-19.
Turner's era experienced its own share of calamities. One of these, the explosion of volcanic Mount Tambora, in Indonesia, on April 10, 1815, may have influenced his emphasis on bright coloration later in life. I have had doubts about that, but I've wanted to at least examine the possibility.
According to an incisive account from the website of the National Oceanic and Atmospheric Administration (NOAA)), the explosion of Mount Tambora killed 12,000 people, hurling vast amounts of ash, pumice and sulfuric acid into the atmosphere. A "nuclear winter" scenario ensued. The average temperature dropped 1 degree, enough when combined with the darkened skies and above average rainfall, to produce the "Year without a Summer" in 1816.
One of the less-catastrophic effects of the Mount Tambora explosion was the large number of spectacular sunsets which occurred during 1816. A number of art scholars have speculated that Turner, having observed these sunsets, changed his use of color from the rather sedate hues of his early career to a palette dripping with gold and scarlet. 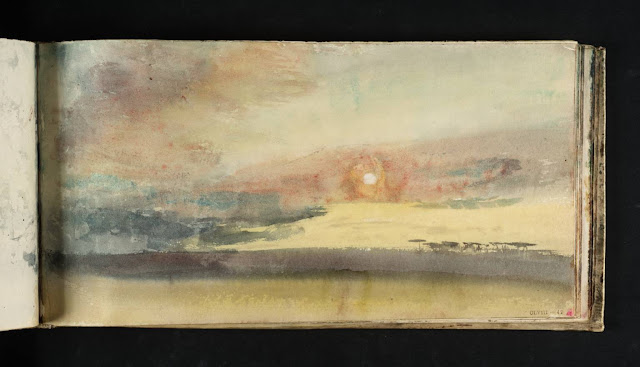 J. M.W.Turner, Study of Sky from the Skies Sketchbook, c. 1816-18
Did Turner catch "Yellow Fever" during the "Year without a Summer" of 1816? The Tate Britain archives preserves one of his watercolor sketchbooks (above), dated to 1816-1818. Turner may have painted these watercolors to record the remarkable sunsets of 1816. He was on a working tour of northern England during the summer of 1816 - generally getting soaked to the skin by the endless rain.
However,Turner's greatest sunset paintings were not created until many years later. If the sunsets of 1816 planted the seeds for such masterpieces as The Fighting Temeraire (1838) and Sun Setting over a Lake (1840), these took a long time to sprout. 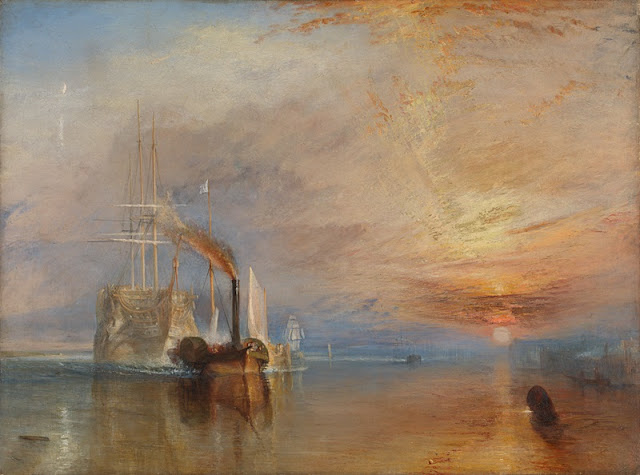 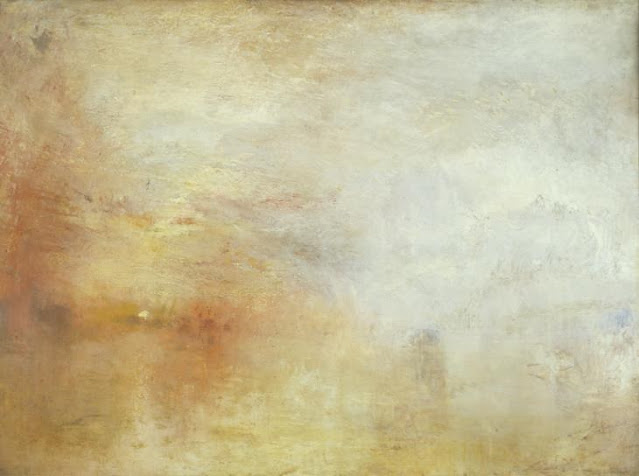 J. M.W.Turner, Sun Setting over a Lake, c.1840
The story of how the aging Turner changed his approach to painting from Old Master methods to something approaching Abstract art is a compelling one. Yet, as I prepared this essay, something did not seem correct with how I was addressing my topic.
I had the uneasy feeling that I was letting slip "this moment," the incredible experience of witnessing the "Turner Sunset" outside our window. I was failing to hold on to the instants of inspiration recorded in Anne's photos.
Rereading the chapters on Turner in Kenneth Clark's The Romantic Rebellion confirmed my suspicion. Clark wrote that the "part played by sunsets in romantic art is too large a subject for a single chapter." If that's the case for a book by one of the greatest of art historians, how much more of an overreach would it be for a short essay like this? 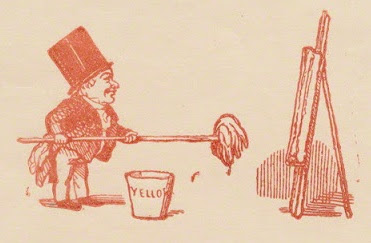 Richard Doyle, Turner Painting One of his Pictures, 1846
It should be noted that Turner's late career experiments with color and form made him a target of much criticism, as in the infamous cartoon from 1846. Clark, writing with great insight, notes the dangers Turner and other Romantic-era painters faced in relying upon a bright color scheme.
It was often a perilous procedure, leading to garishness, and one might have expected Turner,with his love of stunning effects to have sometimes forced the tone. But the remarkable thing about his sunsets, is their delicacy.
Clark might well have used "sensitivity" rather than delicacy, though both words imply Turner's awareness of and communion with nature. Whether a sunset or a sunrise, storm clouds over a Yorkshire moor or some other natural  phenomenon, Turner was alive to the "moment."
These reflections make the Turner Sunset outside our window so much more meaningful. It was a moment of beauty to be cherished, a lesson about awareness to be taken to heart. 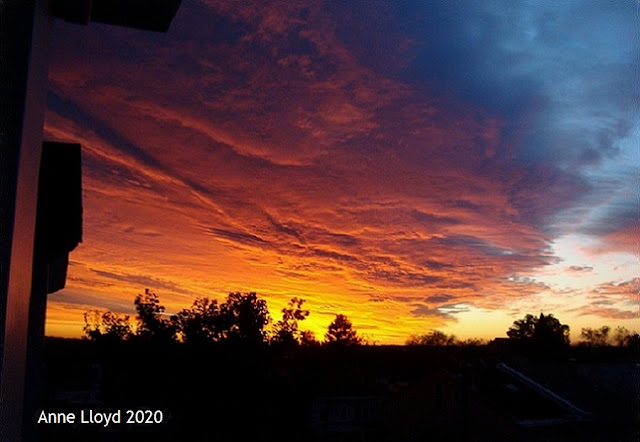 When I first studied Anne's photo (above), I was struck by how the dark orange and dusky purple clouds sweeping down from the left resembled the flow of magma from a volcano, igniting the trees and huts standing in its path. When confronted with a scene of such awesome force or beauty, the human imagination tries to grapple with it, to make it comprehensible by drawing a comparison, making a metaphor or giving it a name.
That is what Turner did when he likened winter storm clouds to Hannibal's army marching over the Alps. He had a painting to sell and his patrons were gentlemen schooled in ancient history.
Delicacy of awareness, sensitivity, living in the moment are enough for us. All of these attributes signify mindfulness. It is in the spirit of mindfulness that I conclude this essay with a sequence of photos of the special sunset, a Turner Sunset, which we saw outside our window. 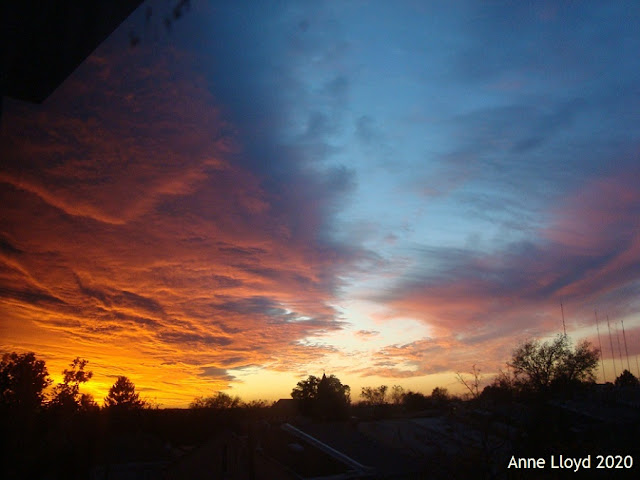 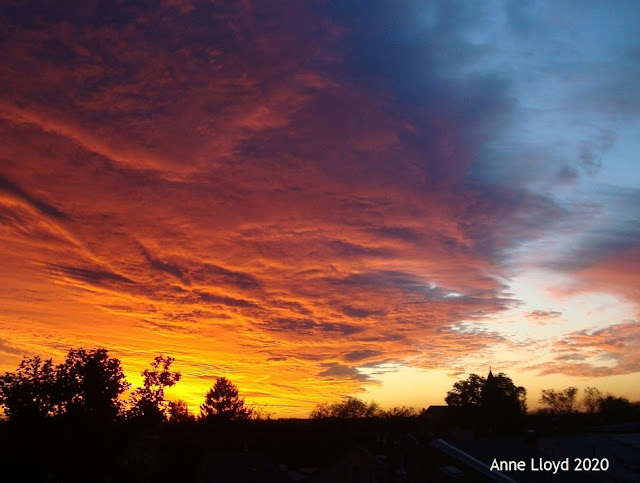 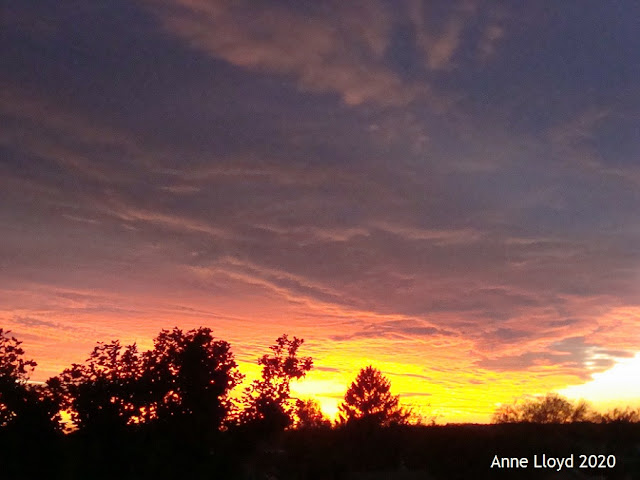 Posted by Art Eyewitness at 6:11 PM