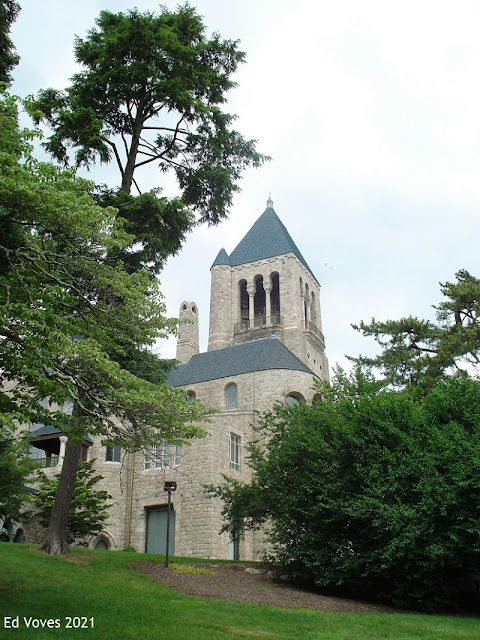 A few days ago, I made a pilgrimage to the world of the Middle Ages. The journey took about thirty minutes and fifteen miles. No time-machines or "Beam me up, Scotty" transporters were required. Instead, a friend and I visited the Glencairn Museum in Bryn Athyn, PA.

Glencairn Museum is one of several remarkable, though little known, museums which were built by wealthy individuals on the outskirts of Philadelphia during the early decades of the twentieth century. The Barnes Foundation, now relocated to center city Philly, is the most well-know of these institutions. But for sheer, awe-inspiring majesty, Glencairn and the adjacent Bryn Athyn Cathedral are worthy of comparison with any of the great public museums of the United States - and of Europe, as well.

Glencairn and Bryn Athyn Cathedral need to be considered together because these stunning edifices were the creation of the same visionary builder, Raymond Pitcairn (1885-1966). Although not a trained architect, Pitcairn brought the passion and work ethic of the cathedral builders of the Middle Ages to his great venture.

Glencairn Museum and Bryn Athyn Cathedral manifest the religious principles of Raymond Pitcairn. He and his family embraced the teachings of Emanuel Swedenborg, a great Christian mystic and theologian of the eighteenth century. Swedenborg's interpretation of Holy Scripture provides the foundation of the General Church of the New Jerusalem, as this denomination is formally known.

Disciples of Swedenborg came to Philadelphia following the American Revolution. Originally, their main house of worship was located in a heavily populated section of the city. Following the Civil War, a tract of rural land was purchased, roughly fourteen miles north of the earlier church. This area was known as Bryn Athyn due to the fact that many early settlers of the region had come from Wales. 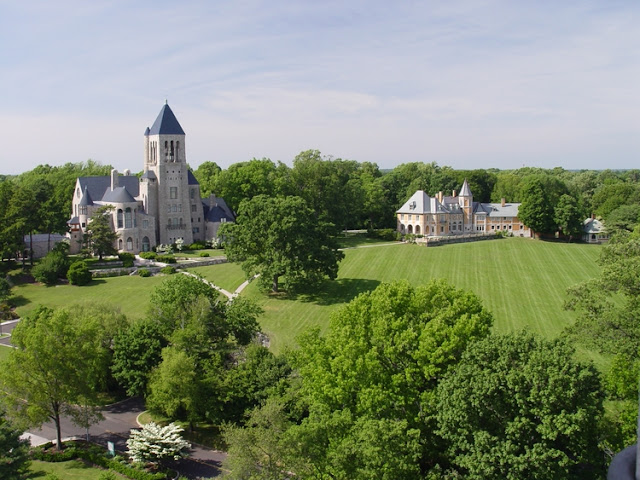 Bryn Athyn is still beautiful today. Developed as an enclave of the New Church, an educational campus, a splendid cathedral similar in design to Gloucester Cathedral in England and an imposing museum were built in its sylvan setting.

If Raymond Pitcairn played the leading role in building Glencairn Museum and Bryn Athyn Cathedral, the role of his father needs to be emphasized as well. A rags-to-riches immigrant from Scotland, John Pitcairn (1841-1916) rose to be director of the Pittsburgh Plate Glass Company. The elder Pitcairn funded the move to Bryn Athyn, Given the singular importance of stained glass in the collection of Glencairn Museum, it is well to remember him when we look at the stunning lancet windows, copied from those of Chartres Cathedral, which his son installed in his medieval-inspired stronghold. 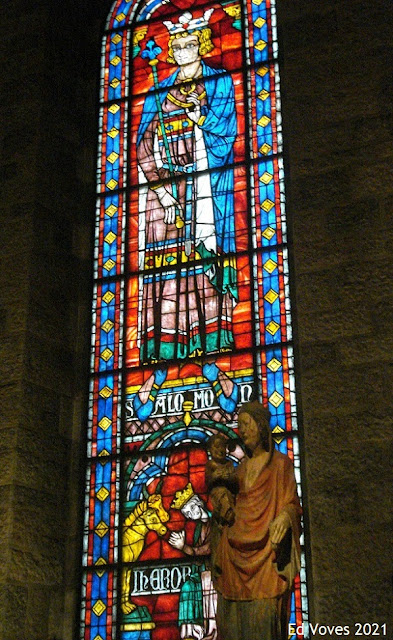 John Pitcairn also played an important role in the creation of Glencairn's collection of 8,000 works of art. In 1878, he and William Benade, another leading New Church member, set off on a grand tour of Europe, the Middle East and Egypt. While on their travels, they conceived the idea of collecting art works and antiquities for a museum dedicated to religion. Although it was over a century before Glencairn Museum formally opened, in 1982, this was the moment of its conception. 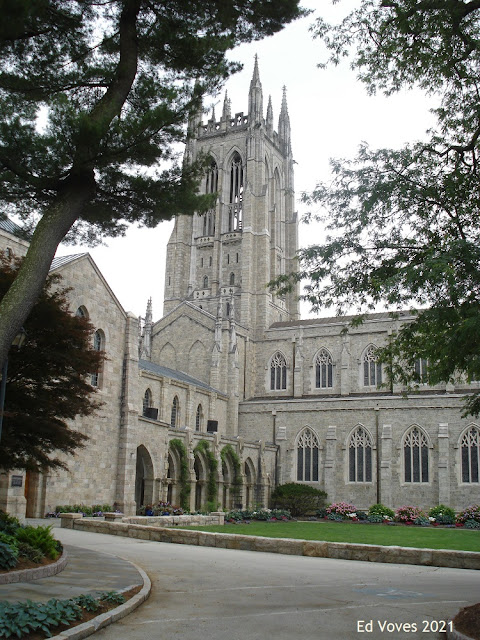 Ed Voves, Photo (2021) Bryn Athyn Cathedral
Glencairn Museum and Bryn Athyn Cathedral recreate the two great epochs of the medieval world in Western Europe, Romanesque and Gothic. Bryn Athyn Cathedral was the first to be built, during the years, 1913-1928. The basic (Gothic) architectural plan was devised by Ralph Adams Cram (1863-1942) who also designed the Cathedral of Saint John the Divine in New York City.
Cram was a superb architect, but Raymond Pitcairn was profoundly moved by the spirit of the Middle Ages. Pitcairn was determined to include quirky irregularities such as appear in real medieval buildings.  Not for him the stylistic uniformity of the imagined Middle Ages which we know as Gothic Revival.
Cram deferred to Pitcairn in the later stages of constructing Bryn Athyn Cathedral. The resulting building contains elements of the Romanesque era and the succeeding Gothic period, just as can be found in many churches from the Middle Ages, which often took decades to complete.
Rather than relying on blue prints, Pitcairn utilized architectural models in wood and plaster, many of them full-scale, to master the construction details of Bryn Athyn Cathedral and Glencairn. It was a very unorthodox and, ultimately, successful way to build a cathedral and a castle. 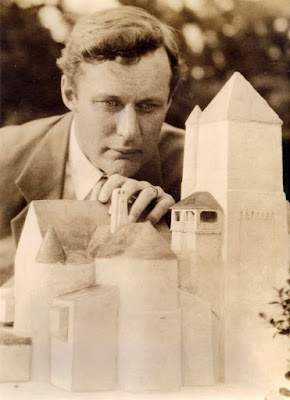 Raymond Pitcairn examines an early plaster model of Glencairn
Bryn Athyn Cathedral was still in its finishing stages when Pitcairn began work on an equally monumental building. It would be a new family home, built in the Romanesque style which had flourished in Western Europe during the eleventh century, the age of the Norman Conquest of England and the First Crusade.
A towering, fortress-like edifice, made largely of granite, Pitcairn's new abode was situated but a short walk from the Bryn Athyn Cathedral and from the Louis XIII-styled mansion which his father had commissioned during the late 1800's. It would be called "Glencairn," fusing the surname of Pitcairn's wife, Glenn, with his own. 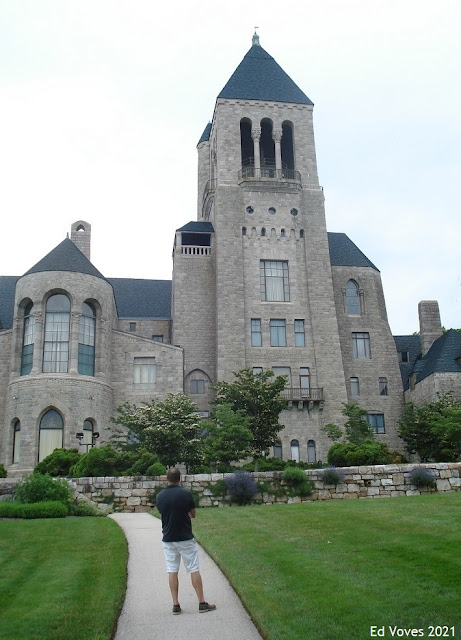 Ed Voves, Photo (2021) Glencairn Museum, Bryn Athyn, PA.
Glencairn was built during the decade of the Great Depression. Despite the economic calamity which brought non-government building programs to a standstill throughout the U.S., Pitcairn kept as many workmen on his payroll as he could. Construction was finished by 1939. Work on the stained glass windows continued for some years afterward.
Glencairn combines the rugged power of stone battlements with the enlightened spirit of the art of Christendom. There are ninety rooms, one of them a "Great Hall" of jaw-dropping dimensions. 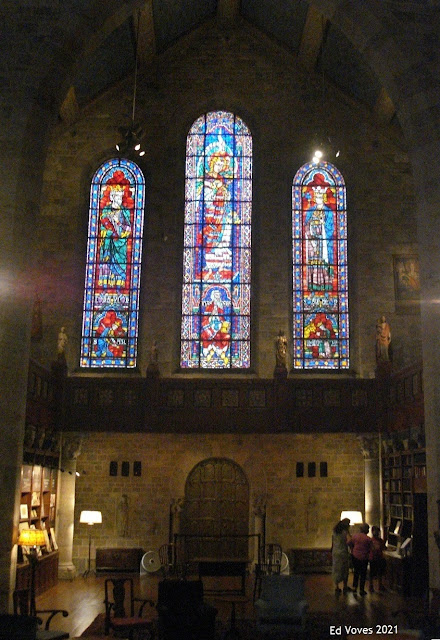 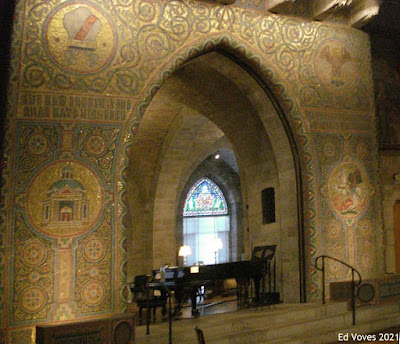 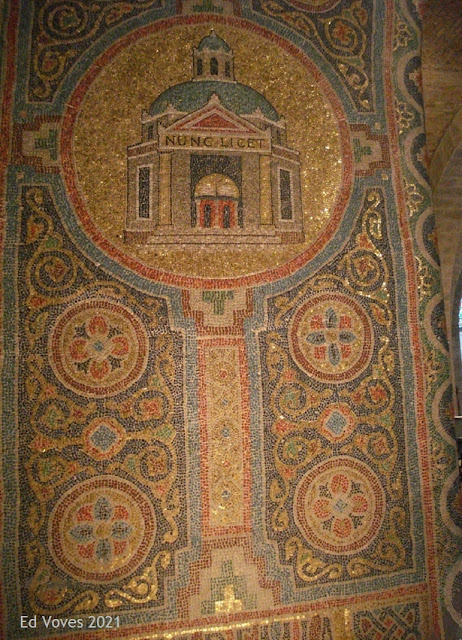 Ed Voves, Photo (2021)
The grand archway of Glencairn's Great Hall.The detail shows the school seal of the Academy of the New Church.
The three sets of stained glass lancet windows are the most astonishing feature of Glencairn's Great Hall. As mentioned earlier, the Pitcairn family fortune was largely based on the annual profits of the Pittsburgh Plate Glass Company. Window-making was in Raymond Pitcairn's blood and he was determined to create stained glass windows which matched the standards of medieval glass-making.
It was no easy task. Craftsman and art historians had tried for decades during the 1800's to unlock the secrets of the master glass makers and window painters of the Middle Ages. In 1921, Pitcairn bought 23 panels of medieval stained glass at auction in New York City so that he could study them at close hand. A year later, he established his own stained glass factory, recruiting expert glass makers from the U.S., Canada and Europe to produce stained glass windows for Bryn Athyn Cathedral and then for Glencairn. The factory remained in operation until 1943. 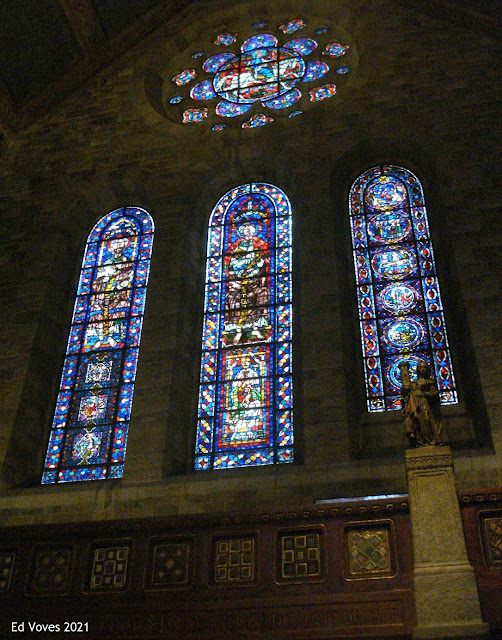 Ed Voves, Photo (2020)
The east wall lancet windows of the Great Hall of Glencairn Museum.
Pitcairn eventually amassed over 260 panels of medieval stained glass. These set the standard for the painstaking research and experimentation which Pitcairn and his team devoted to their efforts. Some of these medieval panels were mounted in the three lancet windows on the east side of Glencairn's Great Hall. These make for an interesting comparison with the other six lancet windows, created at Pitcairn's factory and mounted on the north and west walls of Glencairn. Except for some shades of dark blues and deep violets, Pitcairn's team achieved striking success in matching the color tones and artistry of actual medieval stained glass.
In the case of the other six lancet windows, placed on the north and west walls of the Great Hall, four exactly match the configurations of windows at Chartres Cathedral. However, the central window of each trio mixes other designs from Chartres to create images which Pitcairn believed to be more appropriate for Glencairn. For instance, at Chartres, one of the central windows depicts St. Anne, mother of Mary, the mother of Jesus. Pitcairn, however, replaced St. Anne with Mary in her familiar role as Madonna, placing this image in the center of the west wall lancets at Glencairn. 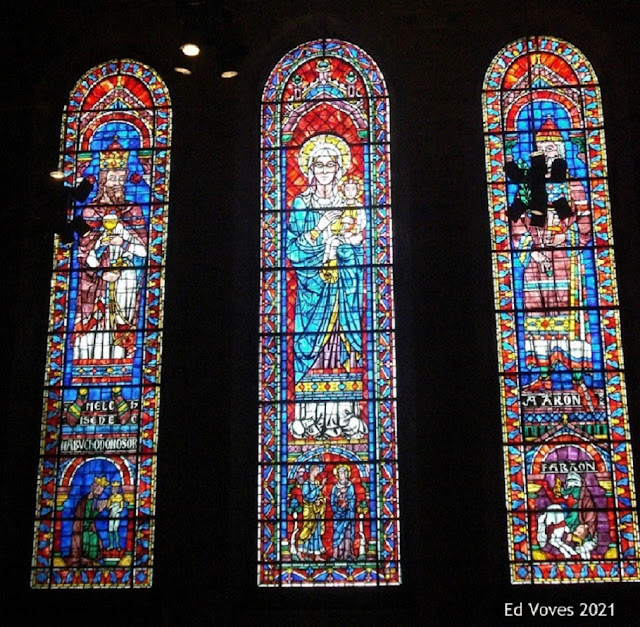 Ed Voves, Photo (2021)
The west wall lancet windows of the Great Hall of Glencairn Museum.
Most art lovers, examining Pitcairn's reworking of medieval themes and fusing elements of Romanesque with early Gothic, would find nothing at Glencairn to complain about except a "crick" in the neck from constantly looking upward. However, Pitcairn's "mix-and-match" approach is open to criticism. Historians and art scholars expend a great deal of effort establishing chronologies and patterns of stylistic influence. Pitcairn's "re-imagining" of the Middle Ages might be held to undermine legitimate scholarship.
In fact, I feel that it has the opposite  -and very stimulating - effect. An interesting example of "re-imagining" can be studied in the way that Pitcairn placed wooden sculptures from the Middle Ages on the railings of the balcony directly beneath the lancet windows. 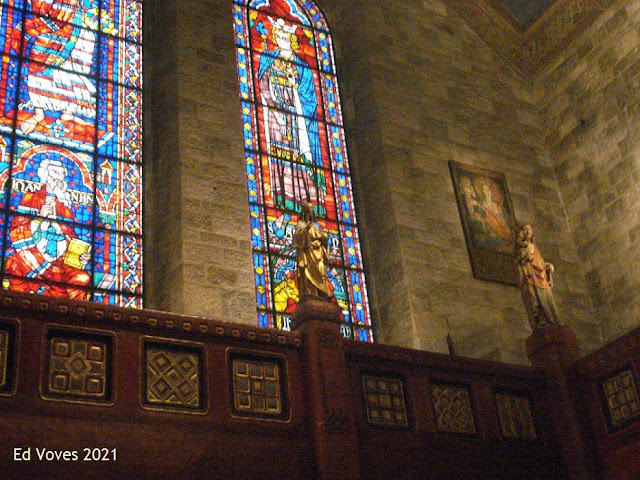 Ed Voves, Photo (2021)
Gallery view of the the balcony & north wall lancet windows                of the Great Hall of Glencairn Museum.
These statues, several of which retain traces of the original paint, were not deployed to  show a time-line progression of the development of medieval sculpture. Instead, they relate to the stained glass narratives above. A gilded carving of a king is placed below the gleaming image of King Solomon and a statue of the Virgin Mary and Christ child directs our attention to a nearby painting of the same subject. 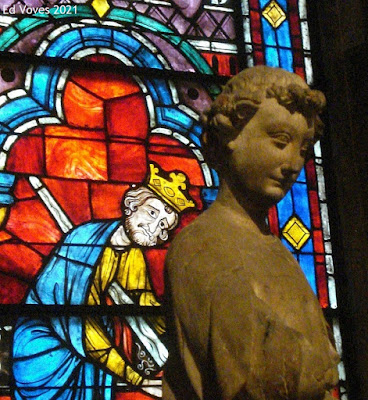 Ed Voves, Photo (2021)
Gothic-era angel sculpture with depiction of the death of King Saul
What struck me was the way that seemingly dissimilar statues and stained glass images could promote thought-provoking dialogue.
That was readily apparent when I looked at a youthful Gothic-style angel, gazing out over the Great Hall, while, behind him, the wicked King Saul falls on his own sword. The stained glass image directly above Saul on this lancet window is King David, a powerful, mature figure. To me the pensive angel recalls the young David, singer of Psalms who had aroused the envy of King Saul, placing them on a collision course which would lead to Saul's death and David's elevation to kingship.
That is how this brilliant juxtaposition struck me and, I am guessing, Raymond Pitcairn thought so too. But, even if my speculation is incorrect in this instance, the unconventional way that Pitcairn displayed his works of art certainly provides much "food for thought." 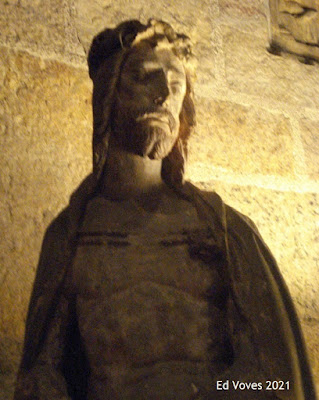 Ed Voves, Photo (2021)                                        Detail of Ecce Homo ("Behold the Man"), Late 15th/16th century
Medieval works of art were Pitcairn's favorite, but he collected widely in order that the range of world religion could be represented at Glencairn. Art from Ancient Egypt, Asian religions, the Classical world of Greece and Rome and Native American cultures are core areas of the Glencairn collection..
Like most museums, Glencairn has faced challenges due to the Covid-19 pandemic. Much of the collection remains closed to general, self-guided viewing. Currently, there are a limited number of guided tours and, hopefully as Covid-19 restrictions are eased, more access to this remarkable institution will be made available. 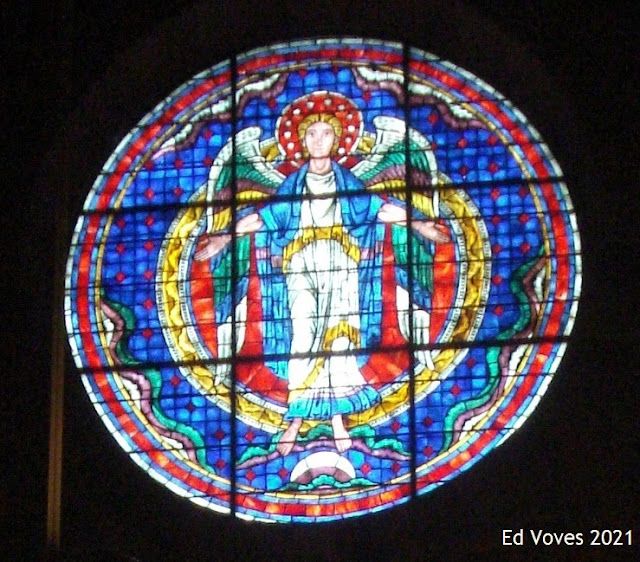 Ed Voves, Photo (2021)
Stained glass depiction of the "Woman Clothed with the Sun" from the Book of Revelations, appearing above the west wall windows
But, in truth, the art works now on view in the Great Hall and several adjacent first-floor galleries are more that sufficient for making a visit to Glencairn a truly memorable occasion. The "dialogue" between these treasures from the Middle Ages and the radiant stained glass windows above opens a portal to this Age of Faith - and to spiritual grace within our own hearts and souls. 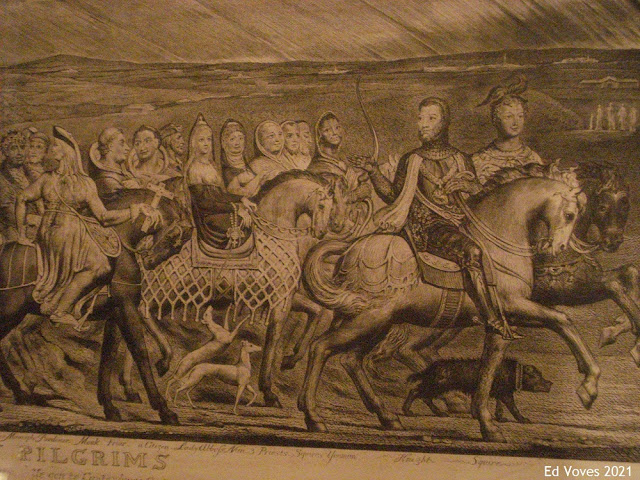