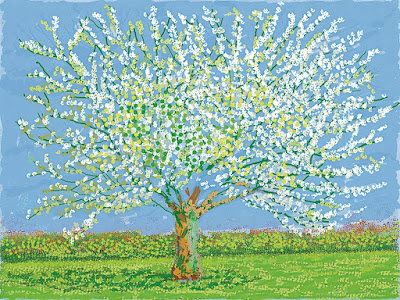 By David Hockney and Martin Gayford

Spring was a little late this year at the Royal Academy in London. The RA's big spring exhibition, scheduled to open on March 6, 2021, had to be delayed until May 23. As you might have guessed, the "on-again, off-again" Covid-19 restrictions were the reason for postponing the much-anticipated exhibit.

The frustration at having to wait was compounded by the irony of the title of the RA show - David Hockney: The Arrival of Spring, Normandy 2020. Worse still, the number of tickets to the exhibition has been limited to ensure the health and safety of the lucky few who manage to get in.

However, before decrying "cruel fate", I am relieved to say that Hockney and Martin Gayford have written a book about this "rite of spring" which will comfort art lovers unable to make it to the Royal Academy. Yes, there is nothing like seeing art in person. But from time-to-time an art book appears which is so profound in spirit and so superbly written, that reading it is a moving experience like visiting an art gallery. 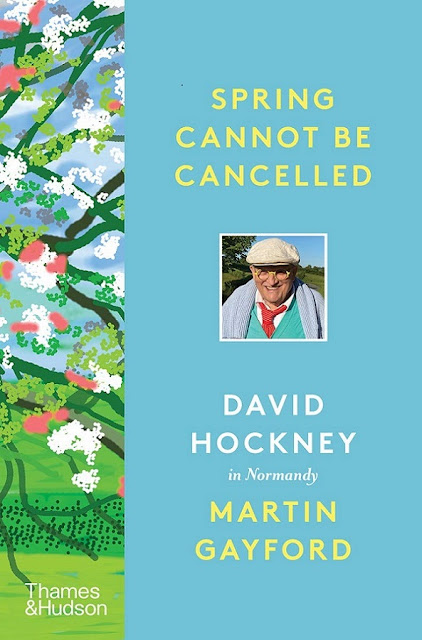 Spring Cannot be Cancelled: David Hockney in Normandy is such a book.

The genesis of this remarkable book began a year and some months before the  Covid-19 threat appeared.

On October 22, 2018, Martin Gayford received an email from Hockney. The two men, writer and artist, have been friends for many years. They co-authored two recent books, A Bigger Message and A History of Pictures.

Gayford read Hockney's email with great interest. Hockney, born in 1937, was about to begin another adventure in his amazing career. He had found a new place to paint, Normandy in rural northwest France. But he wasn't going to do it as a tourist. He was going there to live and to paint.

Hockney's new domicile is a steeply-roofed Norman farmhouse called La Grande Cour. He decided to buy it while on vacation to France, after spending much of the preceding decade engaged in landscape painting in his native Yorkshire. Normandy would provide a change of scenery while exploring the quiet drama of the arrival of Spring 2020. 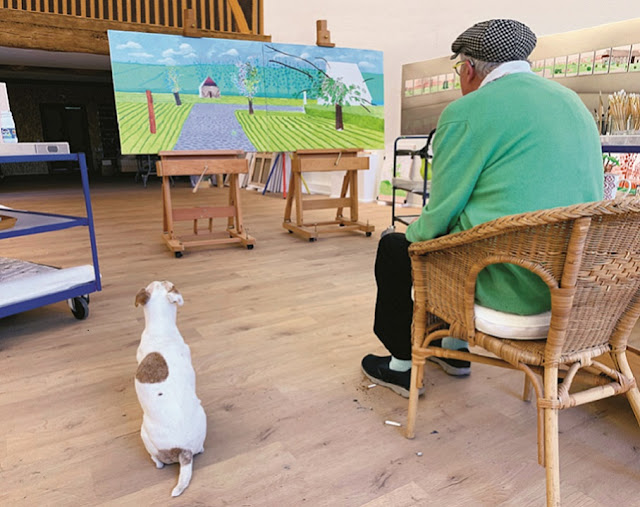 I think I've found a real paradise. The place is perfect for me right now. I'm less interested in what other people are doing. I'm just interested in my own work. I'm on the edge of something, a different way of drawing is coming through, and I can do it here.

This "different way of drawing" comes from an intensely focused way of looking. Much of the text of the book is drawn from emails between Hockney and Gayford about the experience of living and working in Normandy. Along with the day-to-day details of Hockney's life in the French countryside, another major theme quickly emerges. This relates to Hockney's reflections on one of the key elements of painting - perspective.

One of the first email conversations with Gayford discussed Hockney's discovery of the writings of Pavel Florensky, a Russian scholar who was executed by Stalin during the Great Purge of the 1930's. Florensky had argued against accepting one-point "vanishing" perspective as determining whether a picture is "correct" or not.

The human eye and imagination, Florensky argued, do not work exclusively by the mathematical standards of Renaissance artists. Instead of focusing on one exclusive point, receding to infinity, our vision can relate to multiple perspectives more or less at the same time. 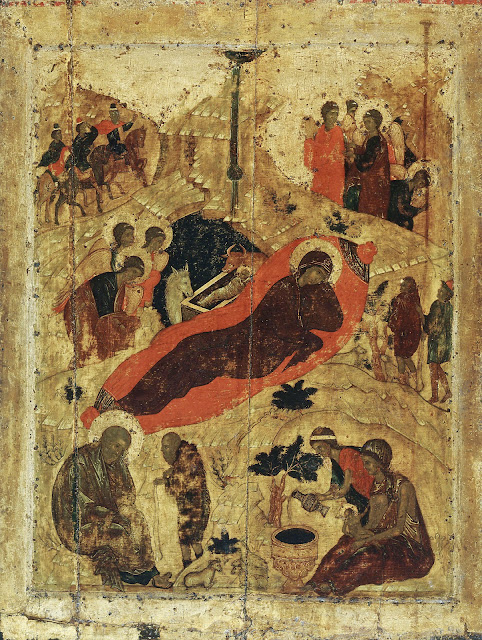 This "polycentered" view  can be experienced by studying medieval icons by Andrei Rublev. Here several incidents from Christian scripture, viewed from different points of view, are depicted on the same pictorial space. Once we adjust our "spiritual" eyes, the vitality of Rublev's icon is readily apparent.

Hockney was intrigued and, as Gayford notes, his enthusiasms are "imperious." Excited by Florensky's theories on medieval art, Hockney was "primed" to look at his new surroundings from unconventional points of view. Normandy also supplied him with additional images with which to consider "polycentrism."  These images, arranged in a sequence of 75 scenes, embroidered on a 230 foot long cloth, were very close at hand to his new home at La Grand Cour - the Bayeux Tapestry.

From a political standpoint, the Bayeux Tapestry is a classic case of one-point perspective. It was designed and executed to justify the invasion of England in 1066 from the standpoint of William the Conqueror and his half-brother, Bishop Odo, who commissioned it. Women from defeated England, famous throughout Europe for their skill in embroidery, are believed to be the actual creators.

The historical details hardly concerns us - and probably were only of marginal interest to Hockney when he visited Bayeux in 2018. Instead, the Bayeux Tapestry's importance lies in its "total immersion" effect. The drama of life and war in 1066 unfolds above, below and all around, literally overwhelming our senses. 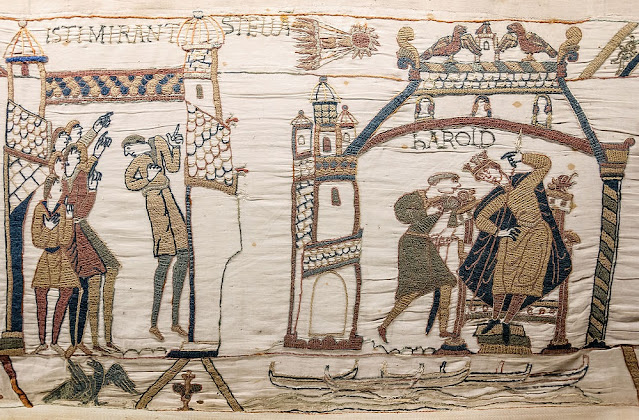 What Hockney set out to do, once he settled in at La Grand Cour, was to apply some of the insights gained from pondering Florensky's ideas on perspective and the sequential, immersive format of the Bayeux Tapestry to the natural environment of his new home.

Hockney and his assistant, Jean-Pierre Goncalves de Lima, moved in to La Grand Cour during the course of 2019. Gayford, working on a book about the history of sculpture with Antony Gormley (similar to the one he co-authored with Hockney on painting) came over for a visit. Everything seemed to be working-out as planned.

Then came Covid-19. Hockney was cut-off from England, Los Angeles and the global art scene . Yet, the travel-bans did not affect his art in the least. 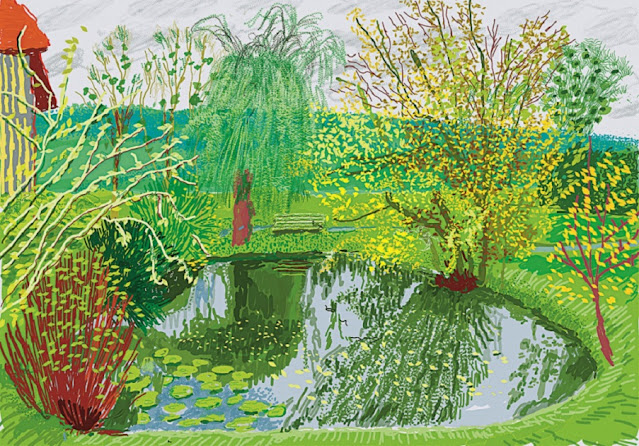 In a brilliant insight, Gayford compared Hockney's situation, "locked-down" in rural Normandy, to Jean-Jacques Rousseau's sojourn on a small island set in a Swiss lake, the Île Saint-Pierre, during 1765. For two months, much as Henry Thoreau did at Walden Pond, Rousseau communed with nature. Rousseau's observations, shared through his writings, have influenced human awareness of nature ever since.

Hockney now had the opportunity to do the same with his iPad and he is not a man to miss such an opportunity. But, as Gayford astutely notes, he could not  lapse into a "dream-time" state and then hearken back to his memories later. Art requires a different approach, even though the objective is the same.

While he was observing the splashes on his pond, of course, Hockney could not have been in a dream trance. He was concentrating hard on what he was seeing and on retaining a clear visual memory of it. But it is likely that the process cleared his mind of the flotsam of worries and stray thoughts that normally fills our consciousness. Several times in conversation with me he has mentioned an example of the "deep pleasure" that he gets from "just looking..."

For Hockney "just looking" translates into "just working." Hockney has one of the great work ethics of artists of modern times. He has also demonstrated an  astonishing versatility throughout his long career. This was abundantly clear at the great 2017 Metropolitan Museum retrospective and it needs to be kept in mind when comparing great set-piece paintings like Mr. and Mrs. Clark and Percy with his iPad drawings. 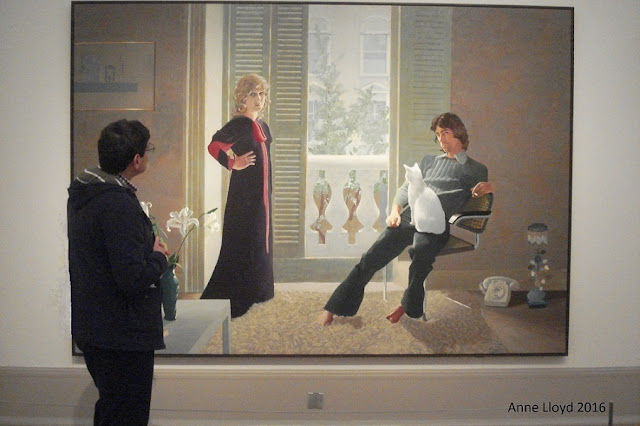 When studying one of Hockney's great early works like Mr. and Mrs. Clark and Percy or Portrait of an Artist (Pool with Two Figures), painted in 1967, you quickly become aware that he is portraying the Eternal Now rather than a transient moment in time. Hockney was also painting in dialog with the great masters of the past, so that these stupendous works of his are breathing new life into the great traditions of art, each time we look at them.

Can we say the same for the iPad works from La Grand Cour? The individual iPad drawings were done at great speed, sometimes three a day so that Hockney could react quickly to changes in light and shadow. Therefore, comparing one of these iPad drawings to a work like Mr. and Mrs. Clark and Percy is an exercise in futility.

Judging the iPad drawings as a group - the RA exhibition is showing over one hundred of Hockney's Normandy oeuvre - is the correct approach. Hockney's great achievement at La Grand Cour is his successful integration of multiple vantage or perspective points to create a unified vision of nature as a whole.

La Grand Cour (which translates as "the big yard") is a gracious, rather than a grandiose, spot. Hockney's achievement in addressing nature from a four-acre homestead in Normandy is more remarkable than if he had tried to create a similar body of work at a dramatic location like Canyon de Chelly in the Southwest U.S.A. Once again, the ever perceptive Gayford is there to ensure that we don't miss this significant point.

The moral is this: it is not the place that is intrinsically interesting; it is the person looking at it. Wherever it is, it will be part of the world; the laws of time and space will still apply. The sun will rise and set, and so will the moon.

The moon, in fact, plays a leading role in the final chapter of the book. Hockney in Normandy and Gayford, at his home in Cambridge, England, each watched the "blue moon" of October 31, 2020, Hockney had alerted Gayford that he was going to try capture the nocturnal event. 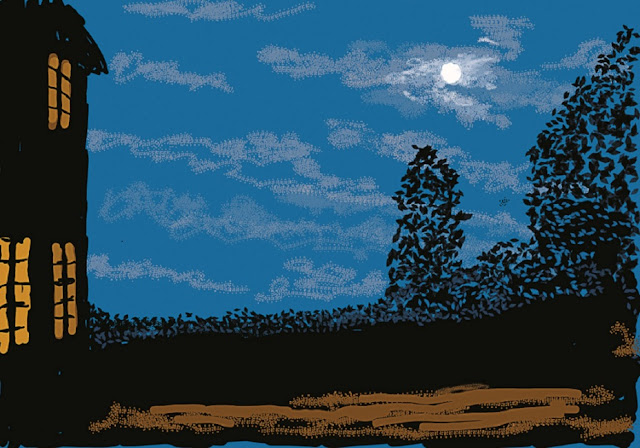 Clouds soon obscured Gayford's view but Hockney, working outdoors in the damp evening, began sending iPad depictions of the moon to Gayford. Later, he called Gayford, to say that he was taking a bit of a nap, in the hopes that the clouds would break and he could create even more iPad drawings of the "blue moon."

Such is the indomitable spirit of David Hockney. Just as he had refused to let the  Covid-19 lock-down "cancel" his plans to record the beauty of Spring 2020, so he wasn't about to allow a few clouds to obscure the "blue moon" over La Grand Cour.

The same can be said about Gayforth. A superb writer, Gayford is also a rare spirit, able to win the trust and cooperation of artists like Hockney. And the 2020 Covid-19 quarantine posed many challenges for him. During the course of that star-crossed year, Gayforth had a heart attack but rallied. Spring Cannot be Cancelled is a testament to him, as well as to Hockney. 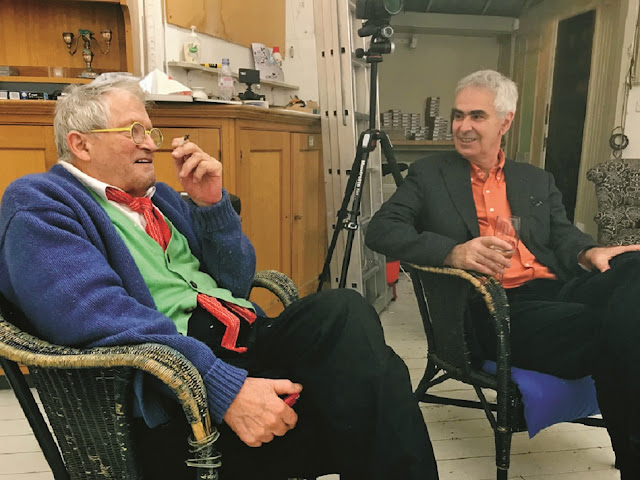 Spring Cannot be Cancelled, quite simply, is a marvelous book, thoughtful and inspired, brimming with what the French call elan vital.

Well into his eighties, David Hockney continues to paint with skill, insight and enthusiasm. He is, as Martin Gayford says so well, an artist who keeps "going and growing... he is teaching us a lesson not only in how to see, but also in how to live."

Posted by Art Eyewitness at 9:12 AM