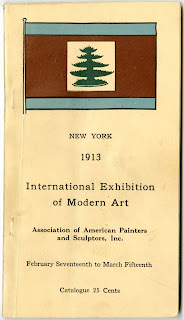 No one can fault the New York Historical Society for the number or quality of the works of art on display in its exhibition recalling the Armory Show of 1913. This fabled event, when modern art made its debut in the United States, is recreated with an amazing number of the actual paintings and sculptures from the show, as well as vintage photos, documents and newspaper clippings.

I could not help thinking that an opportunity had been missed by not including, for the sake of a laugh as well as a sense of perspective, a modern painting called The Triumph of the New York School. It would have been a perfect parting image at the end of the exhibit.

The Whitney Museum of American Art in New York displays this big, monochromatic work, painted in 1984 by Mark Tansey. Measuring six by ten feet, The Triumph of the New York School depicts artists clad in French World War I uniforms surrendering to American counterparts wearing World War II khakis. Clement Greenberg, the Art Czar of the Abstract Expressionists, presides in the role of General MacArthur, while Henri Matisse and Pablo Picasso, decked-out in a fur overcoat used by flying aces in World War I, wait to sign the articles of capitulation.

The point of this sly, ironical work is well-taken. The New York School, the "Ab-Ex" painters of the 1950's, did triumph over the once revolutionary Fauves and Cubists of Paris. But a half-century before this mythical encounter took place, nobody would ever have guessed that American artists could gain the upper hand over the French. In 1913, in a real life encounter, the Left Bank Revolutionaries had swept the field, leaving the "home team" in disarray.

This face-off of American and European artists was of course the Armory Show in New York City. Despite its once notorious reputation, the Armory Show was not intended to be controversial. It was organized under the title of the International Exhibition of Modern Art in order to educate the public in the United States about current or recent trends in the visual arts. The goal of the Armory Show was to influence the taste of Americans in favor of contemporary art and get them to buy paintings and sculptures by living artists.

When New Yorkers, bundled in furs like Picasso's flying ace attire, braved the freezing weather of February 17, 1913 to attend the opening of the exhibition, a storm of controversy erupted.

The uproar centered upon one painting in particular, Marcel Duchamp's Nude Descending a Staircase. Painted only the year before, Duchamp's work was an interesting attempt to evoke a sense of movement in art. Like the Italian Futurists, Duchamp endeavored to go beyond a static moment, frozen or "hallowed" in time, to animate art. 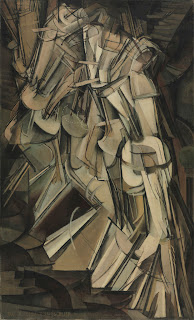 Whether it was a bold attempt to take art in a new direction or second generation cubism, Duchamp's painting sparked criticism and ridicule that had more to do with America's latent Puritanism than the vitriolic debate on Modernism. Had Duchamp entitled his work, Woman Descending a Staircase, it hardly would have occasioned more than a shrug or a grimace of disapproval.

In that case, the howls of protest would likely have surrounded another of the Armory Show's "black sheep." Henri Matisse's Blue Nude, 1907, defied all of the notions of idealized beauty and femininity that had dominated Western art since antiquity. Bernard Berenson, the doyen of Renaissance art, called Blue Nude "the toad." The painting evokes a sense of earthy, primal sexuality totally at odds with Renaissance allegory or with the Gibson Girl ideal of early-1900's America. It was a harbinger of the twentieth century revolts just beginning. 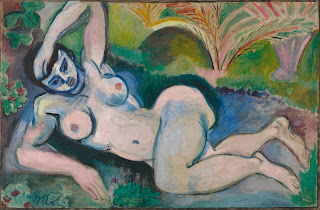 The organizers of the Armory Show, Walt Kuhn and Arthur B. Davies, were - outwardly - anything but revolutionaries. They worked on behalf of the Association of American Painters and Sculptors, formed in 1911 as a progressive alternative to the arch-conservative National Academy of Design. Robert Henri, leader of the ultra-Realist "Ashcan" painters had lampooned the venerable National Academy as being "no more national than the National Biscuit company." Kuhn and Davies were entrusted with putting together an exhibition of contemporary American artists.

Davies was a Symbolist painter and, in a way, Kuhn was one as well. Kuhn's favorite motif, circus performers with haunted, searching eyes, shared a theme with European painters like Gustav Doré and the young Pablo Picasso, both of whom had painted pictures of world-weary acrobats, Les Saltimbanques. To prepare for the Armory Show, Davies and Kuhn visited Europe in 1912, including the Sonderbund Exhibition in Cologne. They were hugely impressed by the upsurge of artistic innovation in the Old World and decided to include European imports in the Armory Show. This decision was to have a momentous effect on American art and culture.

The big exhibit gallery at the New York Historical Society can only hint at the cavernous dimensions of the 69th Regiment Armory on Lexington Ave between 25th and 26th streets. The arrangement of the works on display does allow for a sense of the path that visitors to the Armory Show were expected to follow, from viewing American works of art at the beginning to the octagonal cubicles or "rooms" with European works at the end. 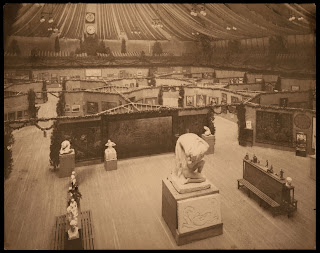 As the notoriety of Duchamp's work spread, many of the sensation seekers who came to the show went straight to the "Chamber of Horrors" where Nude Descending a Staircase was hanging. American artists watched in dismay as superb paintings that evoked contemporary society like John Sloan's Sunday, Women Drying Their Hair or John Marin's brilliant display of modernist technique, Woolworth Building, No. 28, were passed over with hardly a second glance. 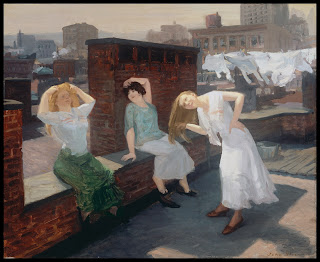 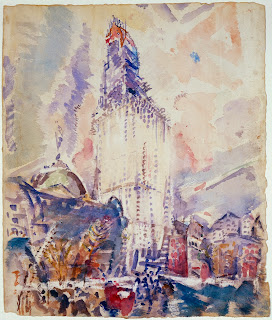 By the time the Armory Show began, Henri was already nursing emotional wounds from comments made by Alfred Stieglitz about his "conservative" approach to art. Although Henri had voted to approve Davies’ selection and organization methods for the Armory Show, he found himself and other Ashcan painters marginalized along with the National Academy of Design.

When Henri met Davies at the Armory Show, he said tersely, "If the Americans find that they’ve just been working for the French, they won’t be prompted to do this again."

But the European Modernist works sold much better than paintings and sculptures by American artists. The biggest seller was a French Symbolist, Odilon Redon. Another painter, little heard of before or since, Amadeo de Souza-Cardoso (1887-1918), sold seven of his eight works on display. The Portuguese-born Souza-Cardoso was a friend of Walter Pach, another of the organizers of the Armory Show who favored European Modernism over American Realism.

For all the wisecracks about Duchamp’s Rude Descending a Staircase, the European avant-garde made a beach-head on American soil for the first time. A chasm opened in American art which to a real extent has never closed.

Davies and Kuhn had actually done a commendable job organizing the exhibition. They placed the contemporary American works in visible positions, including Henri's Figure in Motion, a realistic nude that might have stirred the ire of the guardians of American morality had not Duchamp done so first. If Davies and Kuhn did one thing differently for the Europeans than for the American artists, it was to trace the roots of Modernism in Europe back to the mid-1800's. 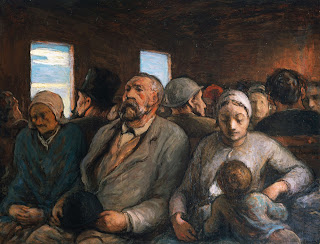 Among the early works of Modernism displayed at the Armory Show were Eugène Delacroix's Christ on the Lake of Genesareth and Honoré Daumier's Third Class Carriage. These works testify to Ernst Gombrich's contention that the real break in the traditions of Western art happened during the early decades of the 1800's rather than during the early 1900's. But that was in Europe. American society had been shielded to a large degree from this cultural revolution. When the Armory Show opened its doors, the effect confirmed Kuhn's prediction that "We will show New York something they never dreamed of."

What Americans saw for the first time was Modernism at full blast. Paintings by Vincent van Gogh and Paul Gauguin from the 1880's and 1890's were displayed in close proximity to Cubist works by Picasso and Francis Picabia of very recent vintage. 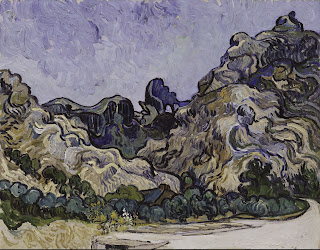 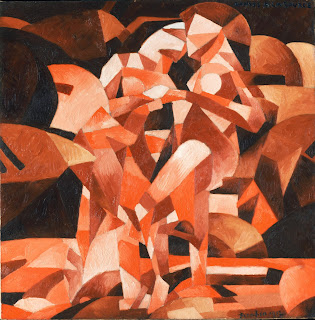 Francis Picabia, Dances at the Spring

Young Americans, especially the Greenwich Village intelligentsia, hailed the works of the European "wild men" as touchstones of revolution. Many, like John Reed and Mabel Dodge, came to the Armory Show primed to revolt.

The New York Historical Society exhibit provides an excellent introduction to this portentous moment in American cultural history. The eventual triumph of the New York School, cleverly evoked in Tansey's 1984 painting, can be traced to the shock of the Armory Show. The same can be said for much of the controversy and intrigue that bedeviled culture in the United States since 1913.

The Armory Show was the moment of Modernism's awakening in the United States. It was also the first of the American Culture Wars.