Art Eyewitness Review: Japonisme and the Rise of the Modern Art Movement 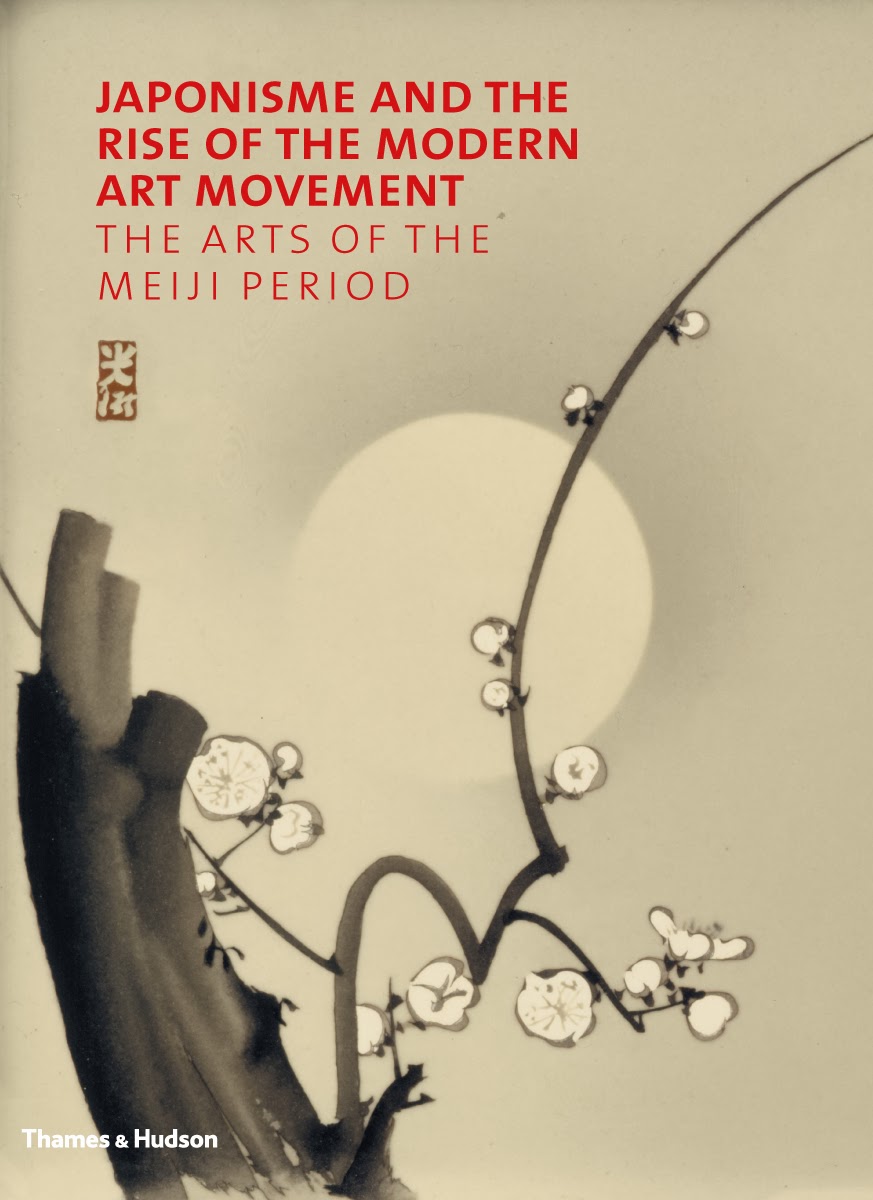 Japonisme and the Rise of the Modern Art Movement: The Arts of the Meiji Period

If art books were nominated for annual awards the way that motion pictures are, then Japonisme and the Rise of the Modern Art Movement would definitely be a front-runner in the "most beautiful book" category for 2013.

Any doubts about that claim will be quickly dispelled by a perusal of this book. On its pages are displayed works by Japanese craftsman that astonished Western connoisseurs during the last decades of the nineteenth century. The ornate enamel vase created in 1893 by Suzuki Shirozaemon and Tsunekawa Seizaemon was monumental in its dimensions and bold in its depiction of nature. At the other end of the scale was the simplified elegance of a 1910 lacquerware box made by Tsujimura Shoka. Whatever the style or size, these are truly "things of beauty." 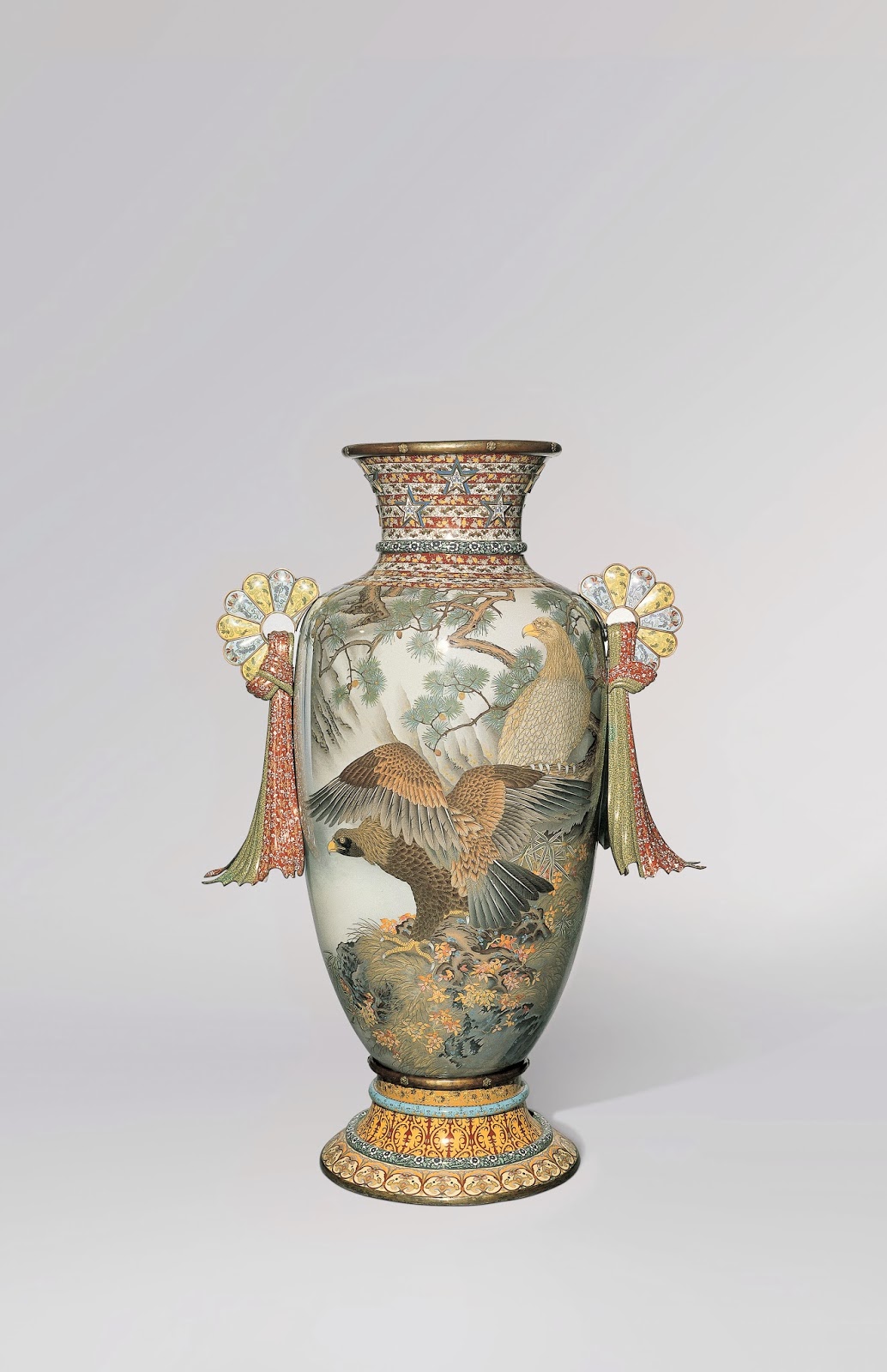 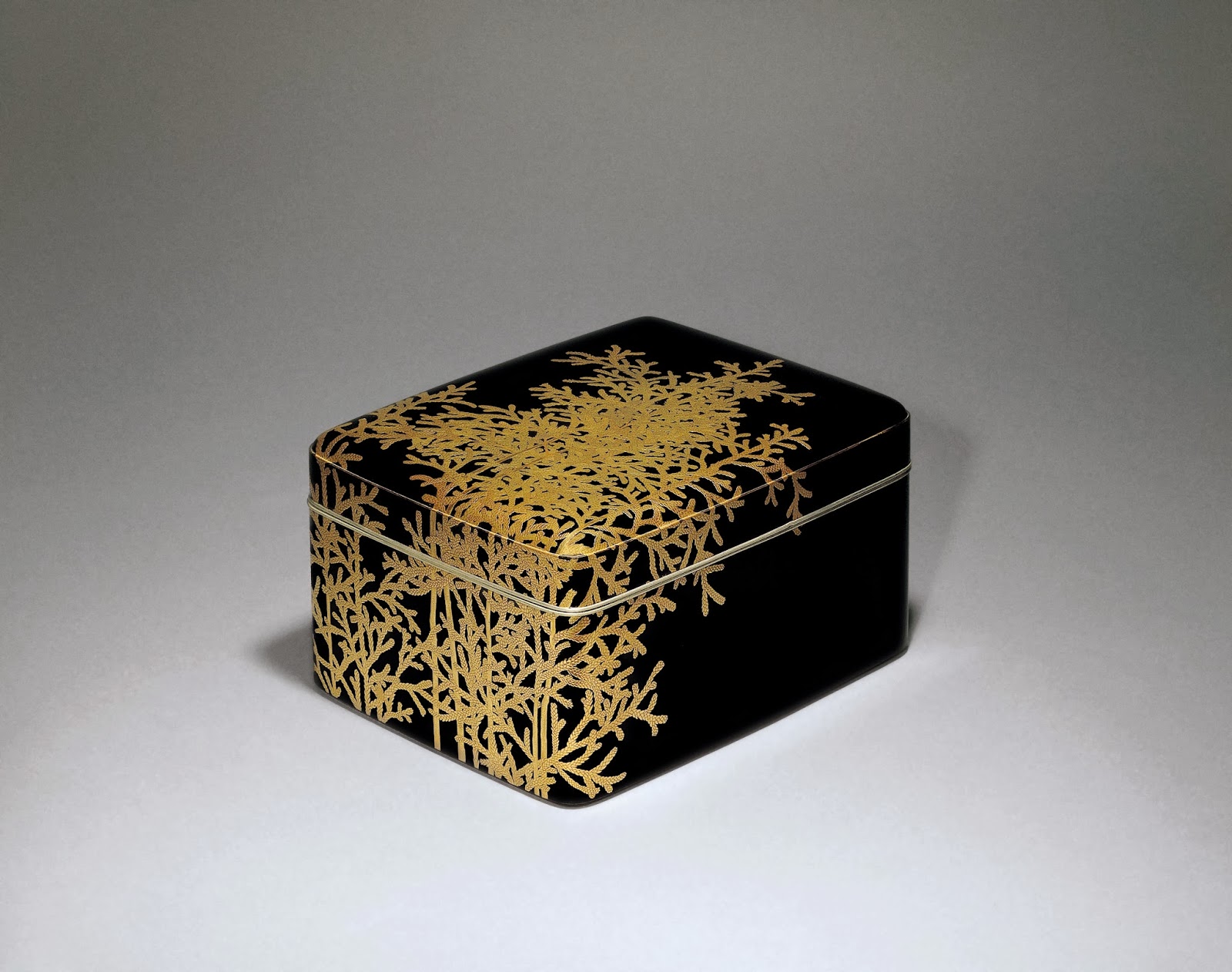 
Of equal - perhaps greater - significance, Japonisme and the Rise of the Modern Art Movement is also deserving of praise for its insightful text. This is a major study of a pivotal turning point in art history. The great national "schools" of European art, with their emphasis on defining characteristics by country, were challenged during the mid-1800's by waves of exotic pictures and objects brought back in the baggage of globe-trotting travelers and colonial officials. Beginning with the heyday of the Impressionist painters during the 1870's, the traditional art and crafts of Japan created such a sensation that the French art critic Philippe Burty coined a new term for this phenomenon: Japonisme.

This is not exactly a new interpretation of the rise of Modernism. Most books or exhibitions on Impressionism or Post-Impressionism have noted the effect of Japanese Ukiyo-e woodblock prints. Manet, Monet, Whistler, Degas and Cassatt were influenced by the relaxed placement of figures and striking coloration in these depictions of the "floating world" of Japan. Vincent van Gogh was so taken by the work of Utagawa Hiroshige that he painted close copies of several of the Japanese artist's prints.

Japonisme and the Rise of the Modern Art Movement certainly has much to add to this familiar story. But the really innovative aspect of this book is its attention to the influence of the material culture of Japan on Western art. Japanese ceramics, bronze casts, fabric art and more prosaic daily objects made a deep and lasting impression on European and American artists. 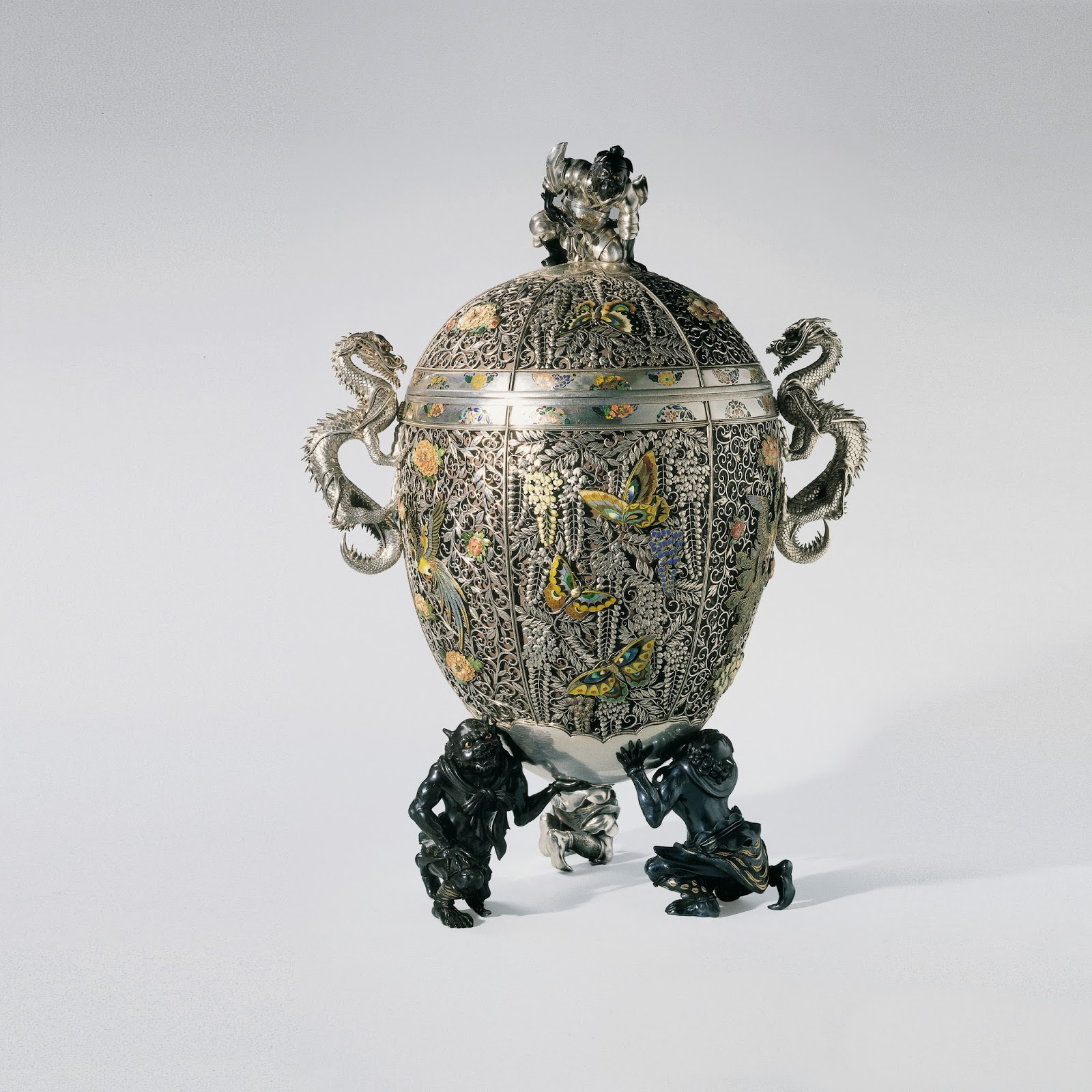 It is particularly ironic that Japanese art and crafts played a major role in the rise of a global arts culture during the last decades of the nineteenth century. The beautiful objects created by Japanese master craftsmen were in fact part of a carefully orchestrated campaign to elevate the political and economic status of the nation of Japan. The Meiji Restoration of 1868 terminated the rule of the Samurai class and ushered in the modernization of Japan's political and social structures. Scenes and themes from Old Japan were exploited to fund the rise of New Japan. 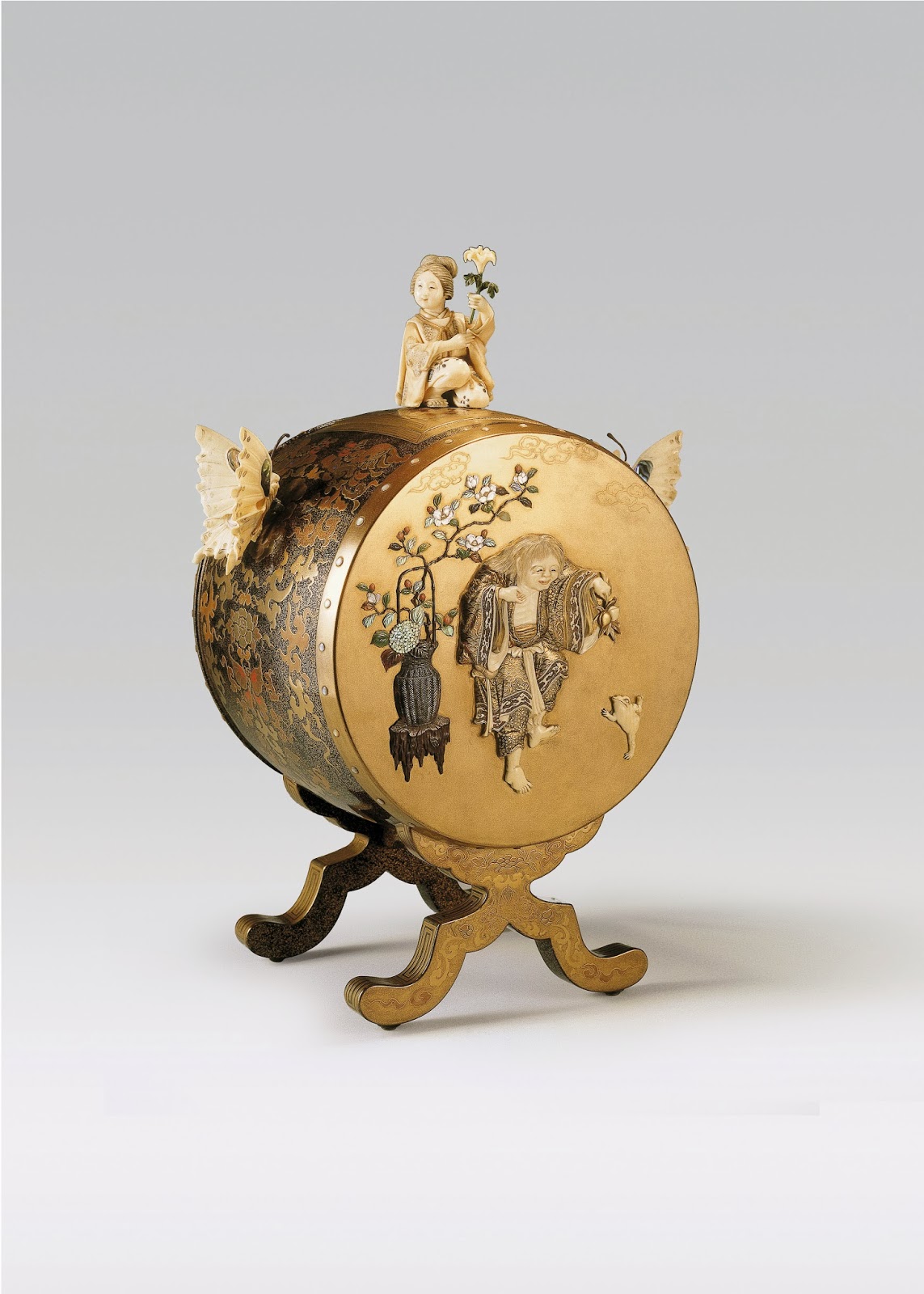 
This began only a few years after the opening Japan's seaports, at gun point by U.S. warships in 1853. In 1867, the Japanese government, still under the control of the Samurai shogunate, sent a delegation to the Exposition Universelle in Paris. The art works and craft items they brought added to the growing mania in the West for Japanese exotica. A year later, after a strong central government took power under the aegis of the young emperor Meiji, the Japanese began to prepare for new exhibitions being planned in Europe and the United States. At the Vienna World’s Fair in 1873 and the 1876 Centennial Exposition in Philadelphia, Japanese art and crafts scored major triumphs.

The visitors to these international exhibits were also buying customers whose cash purchases were of huge importance to the Japanese. Gregory Irvine, the editor of Japonisme, notes that the export of hand-crafted objects accounted for ten percent of the total exports of Japan from the late 1870's to final years of the nineteenth century.

Irvine, the Senior Curator of Asian art at the Victoria and Albert Museum, leads a team of noted scholars. Their essays provide new and stimulating insights into the strategy of the Japanese for exploiting their cultural heritage as part of the modernization campaign of the Meiji period. It was so important that the Japanese government actually adopted a slogan, Wakon Yosai - "Japanese spirit, Western techniques" - for this profit-oriented art initiative. 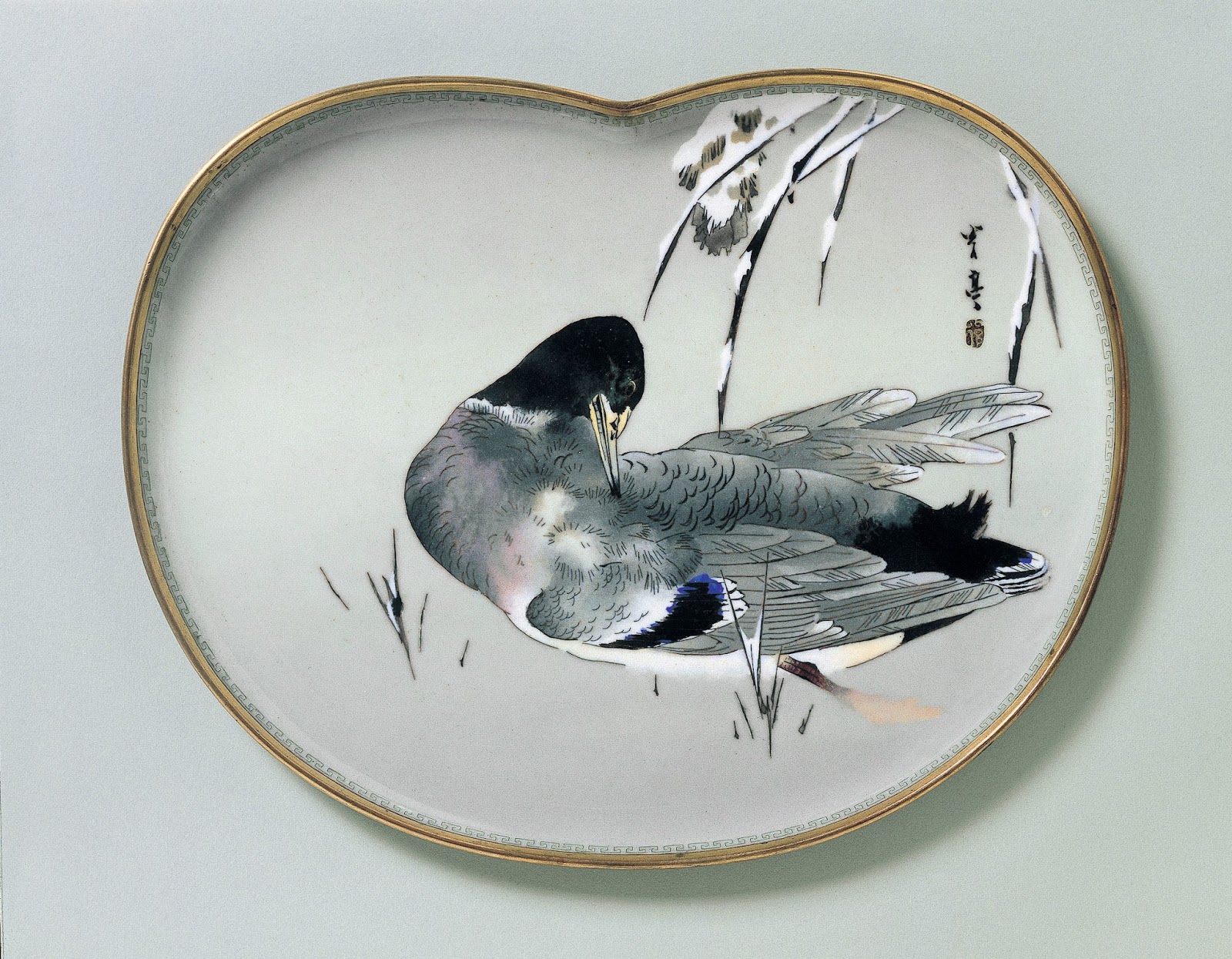 The essays in this impressive book must compete for attention with the exceptionally high-quality illustrations of the book. In one sense, the designers of Japonisme and the Rise of the Modern Art Movement may have done their work too well. For, if readers don't follow the text closely, they are likely to fall victim to the misconception that there was a very close correlation between Japanese crafts and specific works of Western art during this period. That occasionally happened. But for the most part there was a "cross-pollination" of cultural influences that emphasized inspiration over imitation.

Two examples in Japonisme and the Rise of the Modern Art Movement detail this process of West-East dialog and interaction.

Édouard Manet’s depiction of a woman and young child overlooking the Gare Saint–Lazare rail station in Paris is one of the French artist’s most beloved works, familiar to visitors to the National Gallery of Art in Washington. The Railway, painted in 1873, is contrasted in Japonisme and the Rise of the Modern Art Movement with a woodblock print that Manet is likely to have seen. Just as the woman and child in Manet’s painting are posed in front of the bars of an iron fence, so two courtesans or oiran appear informally before a slatted screen overlooking a country landscape. 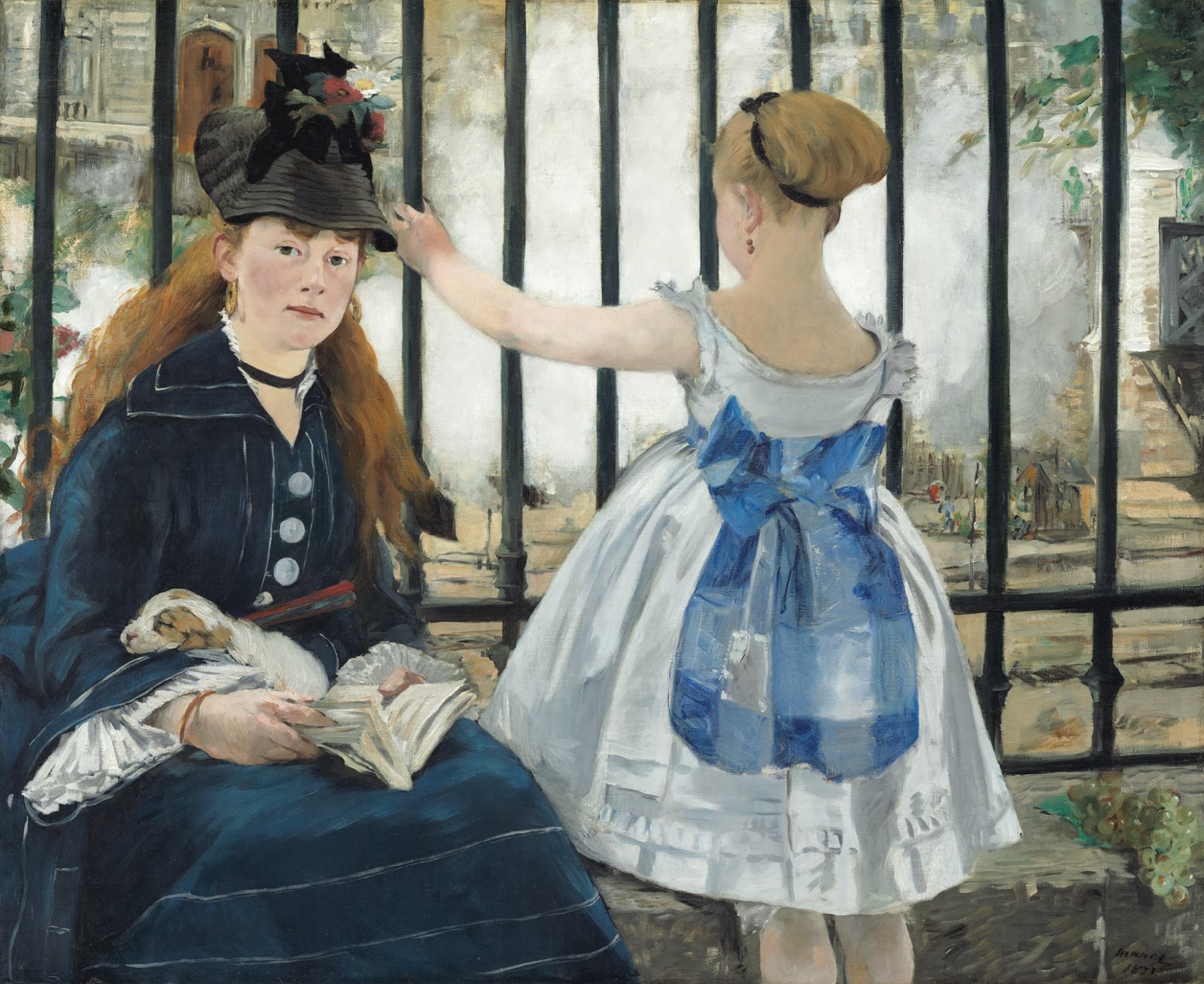 
Two Oiran of Chojiya, which dates to 1815, is displayed next to Manet’s The Railway. It was a type of print much seen in the West by the time Manet painted his scene. But it was the informality and naturalness of the courtesans’ pose that influenced Manet, whose background was a gritty, steam-shrouded rail station rather than a peaceful river bank.

Art historian John House considers the relationship of this work by Manet and another by Degas to Ukiyo-e woodblock prints:

Such canvases are not direct derivations from the Japanese images. Both form part of Manet’s and Degas’s larger project, to create compositions that give a sense of the immediate experience of characteristically modern scenes; the Japanese examples acted as cues, suggesting ways in which this idea of immediacy could be evoked.

House’s insights apply equally to the craft objects from the Khalili collection, which are displayed in Japonisme and the Rise of the Modern Art Movement. The Khalili collection is one of the most important assemblages of Japanese arts and crafts in private hands.

These beautiful objects certainly reflect the process by which Western artists derived inspiration from the material culture of Japan as well as from Ukiyo-e prints. But most of the Khalili collection dates from 1890 through 1910 – well after Manet, Degas and van Gogh painted their pictures. What many of the Japonisme objects in the Khalili collection reflect is the way that Japanese awareness of Western style and taste was imparted to the second and third "generations" of hand-crafted items produced for export to Europe and the United States.

This cultural dialog is explored in one of the most astonishingly beautiful pairings of art and craft in the book. In 1890, shortly before his death, Vincent van Gogh painted Almond Blossom as a gift for his newly-born nephew. An array of thin branches and delicate flowers is arranged against a light blue background. It is one of van Gogh’s transcendent works, an affirmation of life on the brink of death.

Posed next to van Gogh’s masterpiece is Vase Decorated with Plum Blossom from the Khalili collection. Created by the Japanese artist, Ando Jubei, the Cloisonné vase displays a similar scene to that of van Gogh’s painting. This vase, however, was made a decade after van Gogh’s death and well before his fame had spread worldwide. Is there a link between these two works of art or was the temptation too great to resist in placing them side-by-side during the design of the book? 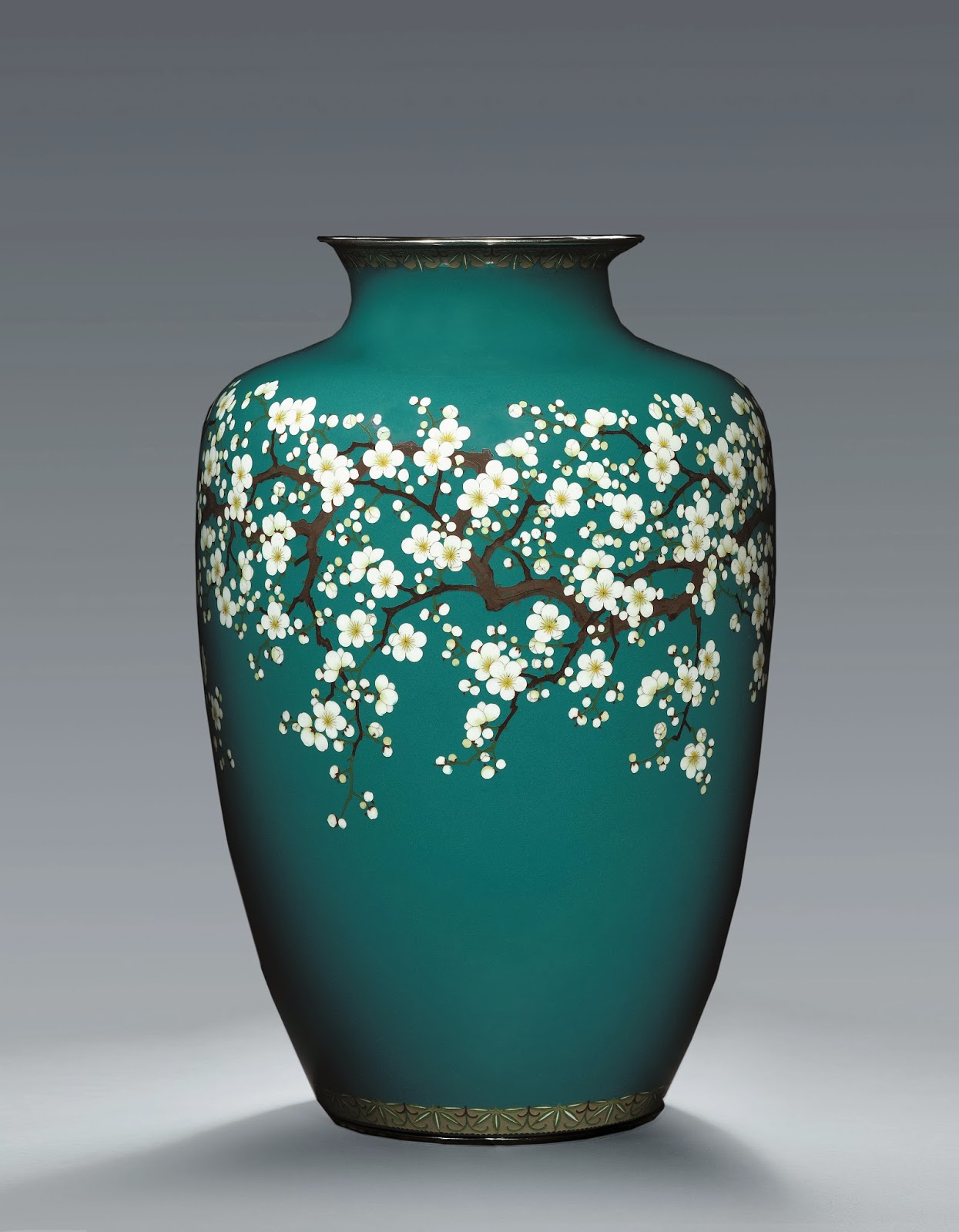 The link indeed exists – and it confirms the indirect process of inspiration that House comments upon in his essay. The introductory chapter to Japonisme and the Rise of the Modern Art Movement displays a small, Japanese vase that Theo van Gogh gave to his mother. His brother Vincent painted a still life of this rather unremarkable vase, light blue with white flowers and a "crackle" effect in the glaze. Here, if anywhere, is the point of "cross-pollination" that produced Almond Blossom. Van Gogh’s painting, in turn, exemplified the sensitivity of the late-nineteenth century that Japanese artists responded to with works like Vase Decorated with Plum Blossom.

Such a magical process is inherent in art, spanning seas and continents, leaping across barriers of time. The exact process of influence and inspiration, like the alchemist’s stone, will never be discovered. But it certainly was at work during the decades of Japonisme and Impressionism, when East met West in a marriage of art and mind.

Images Courtesy of Thames & Hudson and the National Gallery of Art, Washington, D.C.