Treasures from Korea at the Philadelphia Museum of Art 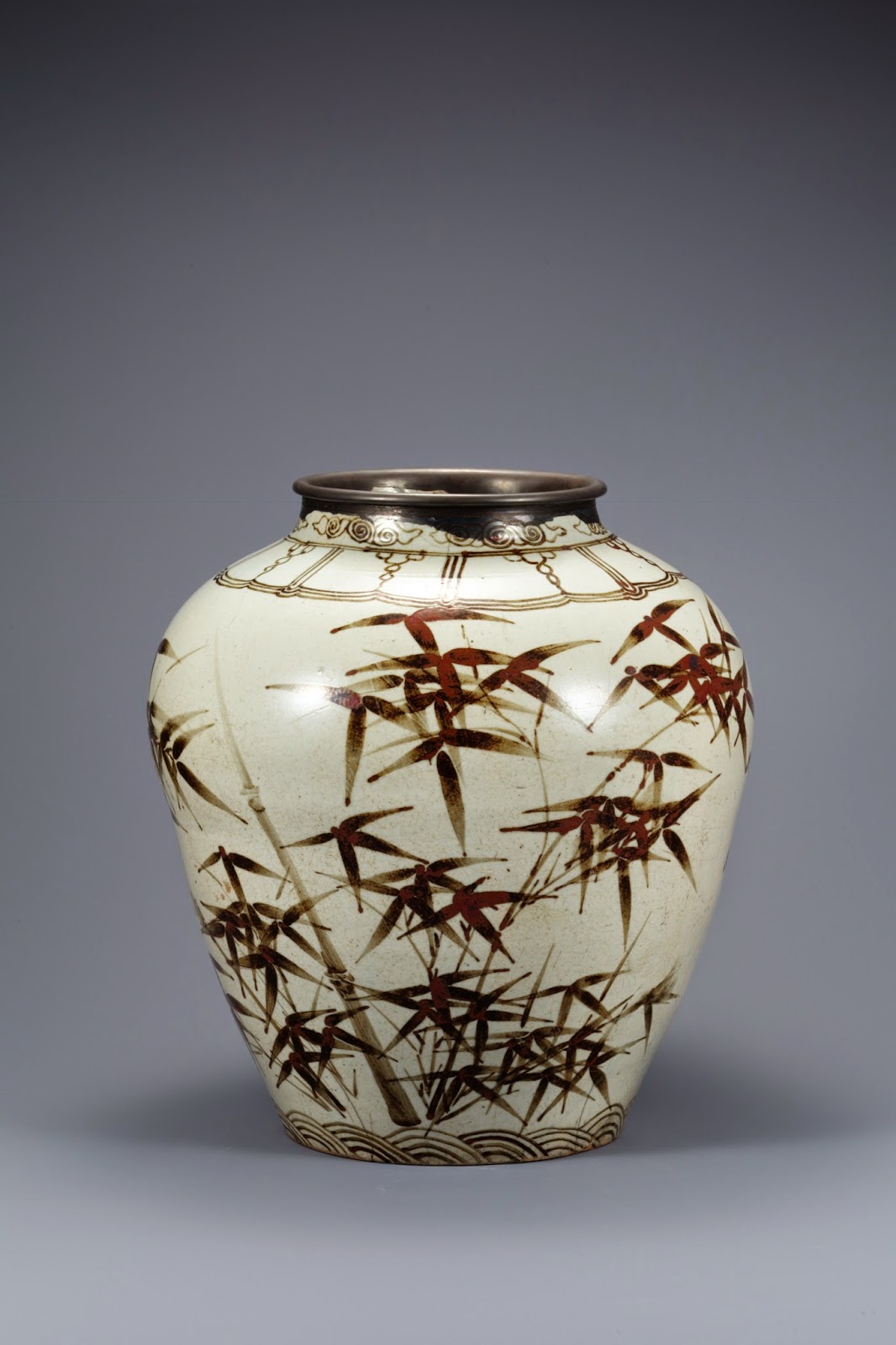 Treasures from Korea: Arts and Culture of the Joseon Dynasty, 1392–1910

With Reflections on Landscape Painting, East and West

The inspiring exhibition currently at the Philadelphia Museum of Art, Treasures from Korea: Arts and Culture of the Joseon Dynasty, 1392–1910, presents works of art from the golden age of a country which sadly has known more of war than peace.

During the eighteenth and most of the nineteenth centuries, Korea experienced prosperity and stability rare in its history. The wondrous paintings, ceramics, fabric art and rare books on display in the exhibition are a testament to what the Korean people, ruled by the Joseon Dynasty, were able to achieve when not threatened by foreign invasion or civil war.

Joseon means "Fresh Dawn." But this new beginning for Korea took a long time in coming. The Joseon Dynasty fought nomad attacks from Mongolia early in its history, survived palace coups and defeated a massive invasion by the Japanese warlord, Hideyoshi, during the 1590's. Almost all of the works of art on display date from the 1700's and 1800's.

Treasures from Korea: Arts and Culture of the Joseon Dynasty, 1392–1910, will continue at the Philadelphia Museum of Art until the end of May and then travel to the Los Angeles County Museum of Art and the Museum of Fine Arts, Houston. As a result, a wide audience in the United States will have an opportunity to study the culture of this long-lived Korean dynasty.

The experience of seeing several spectacular landscape screens in the Treasures from Korea exhibit made an especially powerful impression on me. Studying these magnificent evocations of nature revived my interest in the question of how the very different traditions of landscape painting, Asian and European, eventually reached a point of parallel insight, if not outright synthesis.

These Korean landscape screens are monumental in size and astonishing in the artistic skill and verve needed to create them. The late eighteenth century screen, Ten Longevity Symbols, and Sun, Moon, and Five Peaks, an eight-fold screen created during the 1800's, are very colorful. This use of color was a departure from the more muted tones of earlier landscapes, no doubt reflecting the indirect influence of European art via China.

Both Ten Longevity Symbols and Sun, Moon, and Five Peaks are idealized landscapes rather than naturalistic representations of actual topography. This is in keeping with the cultural ideals of Imperial China, dating back to the Tang Dynasty (618-906), which profoundly influenced Korea. Humans, when they appear in Chinese and Korean art, are often depicted as miniature, insignificant beings, dwarfed by the vast scale of nature.

These screen paintings also represent the two paramount ideals of the Joseon Dynasty: the harmony of a well-ordered society based on the teachings of Confucius and the spirit-restoring effects of country living. For the ruling elite of Korea, known as yangban, the natural world represented a refuge from the stress and uncertainties of the political world. 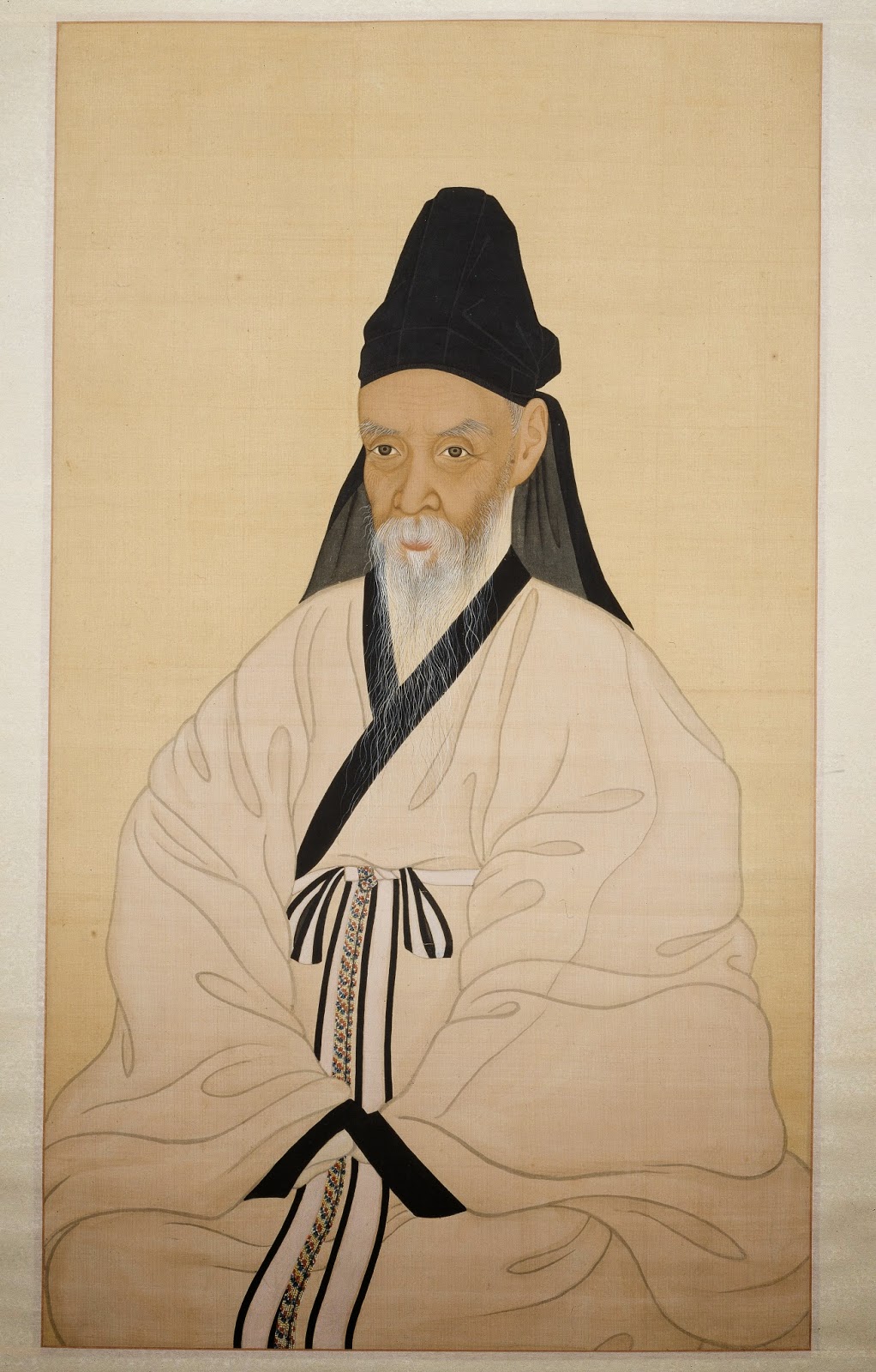 These scholar-statesmen of the Joseon Dynasty are depicted in several works in the exhibit, particularly Portrait of Yi Jae (1680-1746). This hanging scroll, created with ink and colors on silk, dates to the same period as Ten Longevity Symbols. Yi Jae compiled the essence of the teachings of Confucius into a ready-reference work for public administrators entitled the Easy Manual of the Four Rites.

The Joseon Dynasty took power in 1392 after a long series of civil wars. The Joseon rulers abolished Buddhism as the state religion in order to impose systematic codes of behavior based on Confucianism. Yangban bureaucrats like Yi Jae greatly benefited by the invention of a phonetic Korean alphabet known as hangul by King Sejong, who reigned from 1418–50. For the first time, Korean scholars did not have to depend on Chinese script and could communicate their Confucian laws directly to their people.

Buddhism and the spiritual teachings of Daoism were not expunged from Korean society, however. These religious beliefs and their adherents retreated to the countryside, especially to mountain shrines and temples. In Korea, the countryside, remote from the temptations and dangers of power, was the realm of the spirit.

In Ten Longevity Symbols, you can see how the unknown artist "squared the circle," rendering a landscape that was politically acceptable to the yangban, while extolling spiritual values that could be embraced by all.

Each animal, each tree, the waterfalls and the mountain peaks, even the mushrooms, occupy their proper sphere and represent a unique value in Ten Longevity Symbols. Turtles and evergreen trees symbolize long life; the deer are gentle animals living in harmony. A particularly charming touch is the presence of the white cranes. In Daoist teachings, cranes featured as messengers from Heaven, while in Confucianism they represented the dignity and constancy of scholars. This was a symbol sure to please yangban administrators like Yi Jae.

There were in fact many more symbolical elements in Korean landscape painting, to the degree that almost every animal and plant represented an important spiritual value.

Bamboo branches, which appear as a motif on an exquisite white porcelain vase from the sixteenth century, Korea's National Treasure No. 166, symbolized strength, endurance and adaptability. Bamboo trees bend but do not break even in gale force winds. Such "grace under pressure" earned bamboo trees the nickname of "gentlemen" in Korea, for this was what was expected of the yangban elite. The greatest of Korea's heroes, Admiral Yi Sun-Sin, who defeated the Japanese Samurai during the 1590's war, embodied these traits to perfection.

Peach trees and their succulent fruit likewise symbolized a key facet in Korea's spiritual values: immortality. This belief reached back to the beginnings of Daoism in China, where there was supposedly a mystical peach orchard in the western mountains. Transmitted to Korea, this mythological realm came to figure in one of the greatest of all Korean works of art, the fifteenth century landscape known as Mongyu-dowon-do or Painting of a Journey in a Dream to the Peach Orchard.

Mongyu-dowon-do is not on display in the Treasures from Korea exhibit. But don't blame the curators of the exhibition for this omission. Now in the collection of a Japanese university, the fate of Mongyu-dowon-do reflects the tortured past of Korea.

Dream Journey to the Peach Blossom Land by An Gyeon

Mongyu-dowon-do was painted in 1447 by the gifted artist, An Gyeon, for Prince Anpyeong, (1418-1453), the son of King Sejong, inventor of the Korean alphabet. Prince Anpyeong was a noted scholar of Chinese literature. The painting underlines both China's continuing influence on Korea and the cultural breakthroughs which took place under the Joseon Dynasty.

According to the historical narratives of the period, Prince Anpyeong dreamed of a journey deep into rugged hill country where he eventually discovered a beautiful peach orchard surrounded by mountainous terrain. The peach orchard symbolized refuge from the political infighting at the Joseon court, for Prince Anpyeong was engaged in a struggle for dominance with his brother, Prince Suyang, for control of the throne as King Sejong neared death. The peach trees also represent the survival of Daoism. Daoist spiritual teachings traced their roots back to ancient shamanic beliefs, in a land now ruled according to Confucian secularism.

Prince Anpyeong's vision of a Utopia was never realized - at least not in his abbreviated lifetime. Prince Suyang launched a well-planned coup, executing Anpyeong and numerous other family members, court officials and scholars. The painting by An Gyeon disappeared, later surfacing in Japan. It is believed to have been taken from Korea as part of the war loot seized by Hideyoshi's army in 1592.

If Prince Anpyeong's dream was "a dream deferred," it came close to realization during the eighteenth century. Events like Suyang's bloody purge and Hideyoshi's invasion receded into memory. Landscapes such as Ten Longevity Symbols represented the world that men like Yi Jae wanted to believe was possible - and worked diligently to achieve.

Another amazing screen painting, Scholar’s Accoutrements, is a virtual catalog of the implements of power which the Korean elite used to preserve the traditional culture of their nation. This ten-fold screen was painted in the nineteenth century, just at the moment when the outside world was beginning to intrude into the "golden age" of Joseon Korea.

These amazing painted screens on display in Treasures from Korea are fascinating and important in their own right. However, there is a wider significance to these works which can only be briefly sketched here.

The Korean view of nature, reflecting the cosmology of East Asia, was very different from what developed in Europe during the 1400s through 1700's. Landscape painting in the West, with only rare exceptions, served as a backdrop to the religious or mythological narratives of European painting from the Renaissance to the era of the French Revolution.

By the end of the nineteenth century, however, the landscape traditions of East and West reflected a meeting of minds. Impressionist painters like Claude Monet often reduced the scale of humans and animals in their paintings in proportion to the expanse of the landscape. Was this the result of Asian influences transforming the European conception of nature?

Chinese art certainly made an impact on Europe during the 1700's. Later, the craze for
Japanese woodblock prints in France helped shape the revolutionary impact of Impressionism. But the momentous shift in the way that the West has come to perceive the natural world occurred independently from what had transpired in China and Korea.

Take a look at the 1818 masterpiece by J.M.W. Turner, Raby Castle, the Seat of the Earl of Darlington, now in the collection of the Walters Museum in Baltimore. Turner painted the country estate of the fox-hunting Lord Darlington very much in the scale and the spirit of the landscapes of China and Korea. Yet, Turner created this breathtaking view of the English countryside decades before landscapes from these Asian countries became widely known in the West. 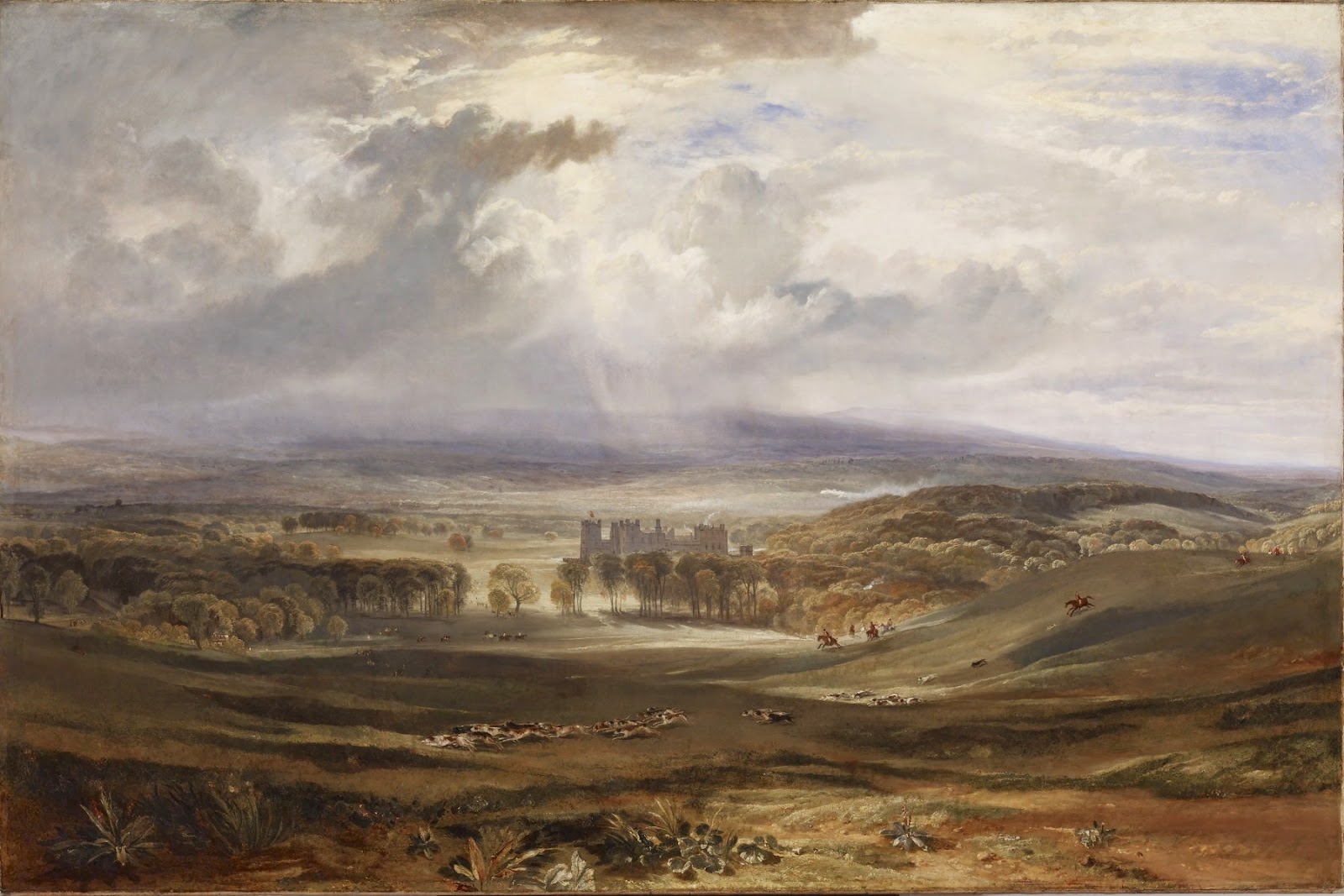 J.M.W. Turner, Raby Castle, the Seat of the Earl of Darlington

Turner's Raby Castle is a dreamscape like Ten Longevity Symbols. Lord Darlington was as determined to preserve "his" lands as a refuge from the outside world, as were the Korean yangban elite. The very year that Turner exhibited this great work, Lord Darlington used his political clout to prevent a railroad being constructed through his estates that might disturb his fox hunting.

The route of the railroad was diverted so that Lord Darlington could continue his pursuit of England's foxes. On September 27, 1825, the re-configured Stockton and Darlington Railway, the world's first public railway using steam locomotives, was inaugurated.

Turner's Raby Castle evokes a key date in the Industrial Revolution. It shows the natural world as English aristocrats wanted it to remain, at the moment just before it would be transformed forever. So too, An Gyeon's Painting of a Journey in a Dream to the Peach Orchard, shows the idealized world view of Prince Anpyeong shortly before he was murdered by his brother in one of Korea's savage civil wars.

Great works of art cannot stop the march of time. But these Korean landscape masterpieces and Western counterparts like Turner's Raby Castle share a kindred view of the sacredness of the earth. Moreover, these great works have helped shaped an appreciation for Planet Earth as a refuge for all humankind - not just yangban bureaucrats or fox-hunting English "milords."

When we look at Ten Longevity Symbols and Raby Castle, the Seat of the Earl of Darlington, we are witnessing early steps in the "journey in a dream" to the greatest landscape of all time, Earthrise, photographed by the Apollo 8 astronaut, Bill Anders, on December 24, 1968. 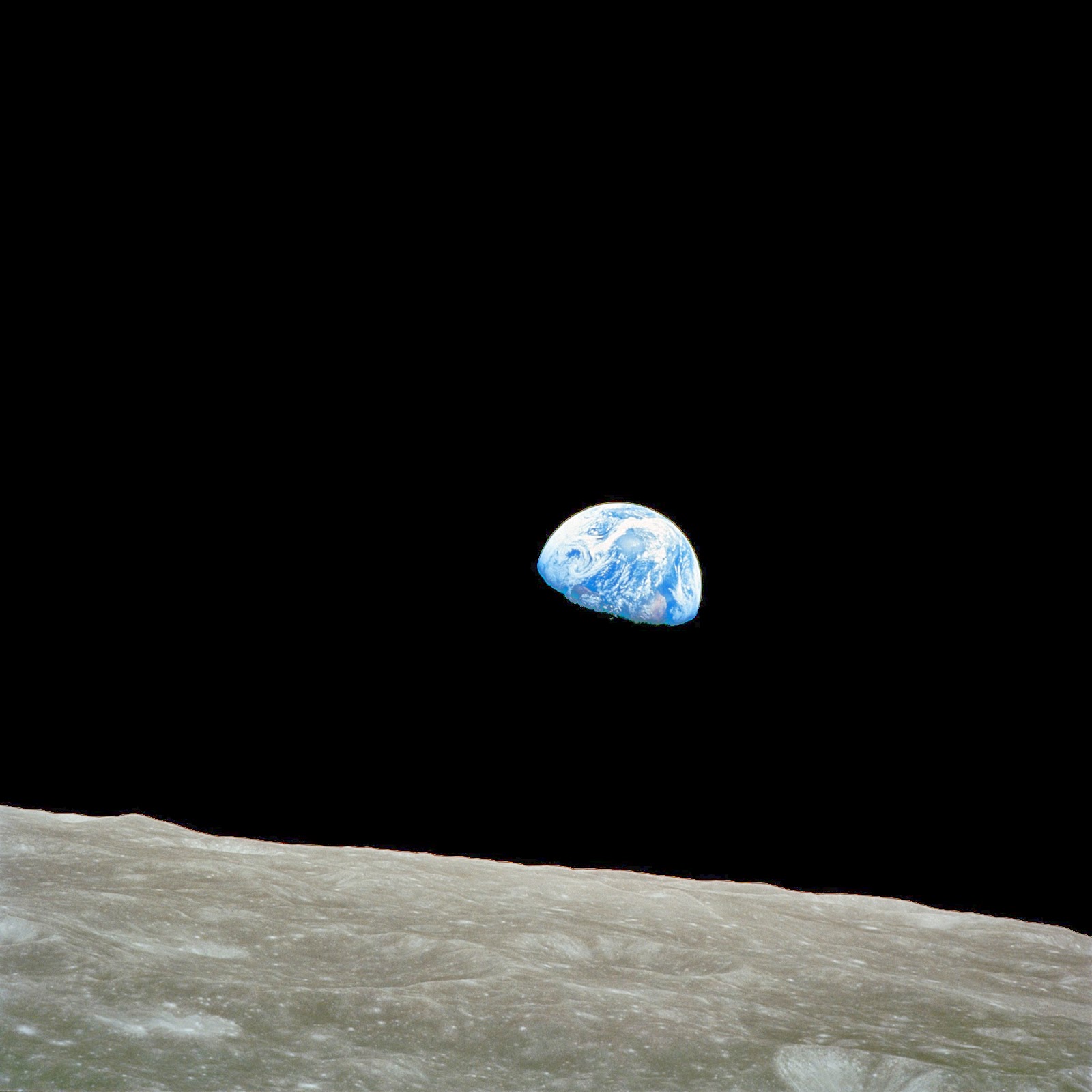 These Treasures from Korea are treasures indeed - for all humanity, talismans of our dream of Earth.

Images from Treasures from Korea Exhibit Courtesy of the Philadelphia Museum of Art.