Lost Kingdoms: Hindu-Buddhist Sculpture at the Metropolitan Museum of Art 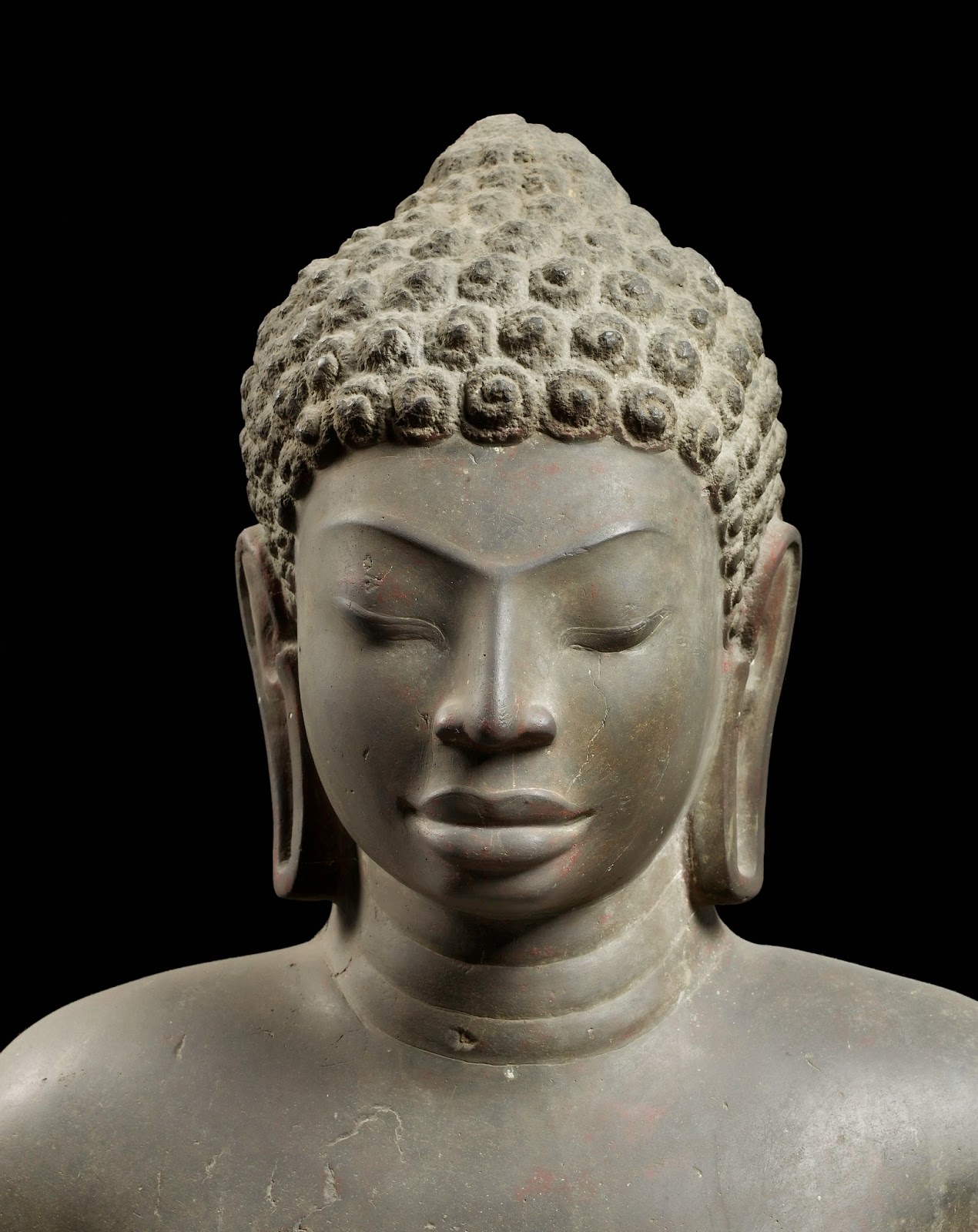 There are few places in the world as extraordinary as the ancient site of Angkor in Cambodia. Many of the temples and shrines at Angkor are gripped by huge, boa-constrictor-like roots of strangler fig trees. The scene, familiar to readers of National Geographic or Smithsonian Magazine, is truly remarkable. But the cultural roots that led to the founding of Angkor Wat are even more remarkable.

The new exhibition at the Metropolitan Museum of Art, Lost Kingdoms: Hindu-Buddhist Sculpture of Early Southeast Asia, 5th to 8th Century, documents how this flowering of sacred art took place in a corner of the world that was regarded as little more than a stepping stone to China.

Lost Kingdoms: Hindu-Buddhist Sculpture of Early Southeast Asia features 160 sculptures, created in various media including stone, terracotta and bronze. Many of them have never before appeared in the West. Cambodia, Vietnam, Thailand and Malaysia contributed numerous works to the exhibition. Several were lent by the government of Myanmar (the former Burma), the first time that this nation has collaborated in an international art exhibition. 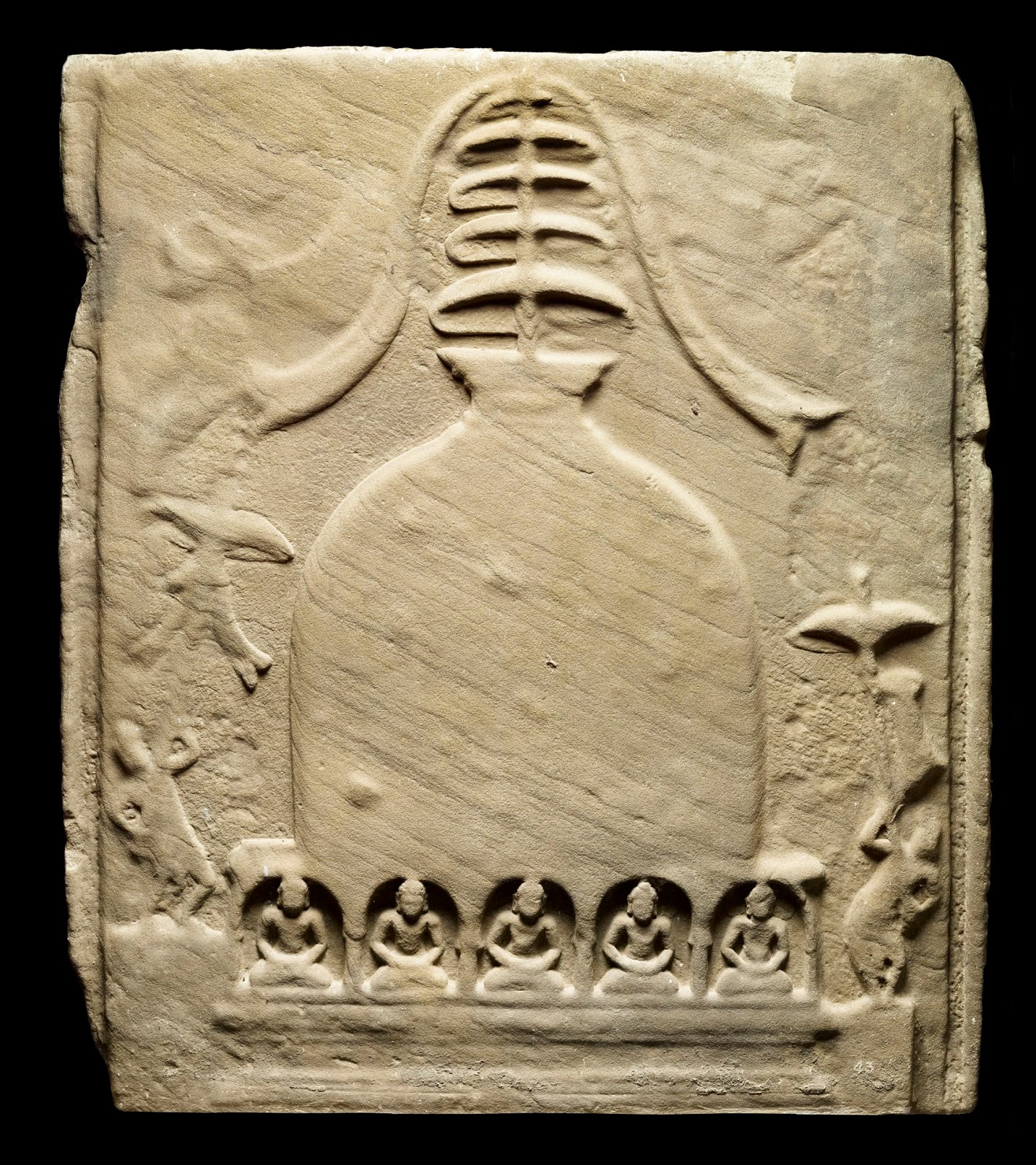 These works of art from first millennium Southeast Asia are - almost without exception - of inexpressible beauty and serenity. Some - like the exquisite terracotta Head of Meditating Buddha from the National Museum, Bangkok - rank as iconic national treasures. 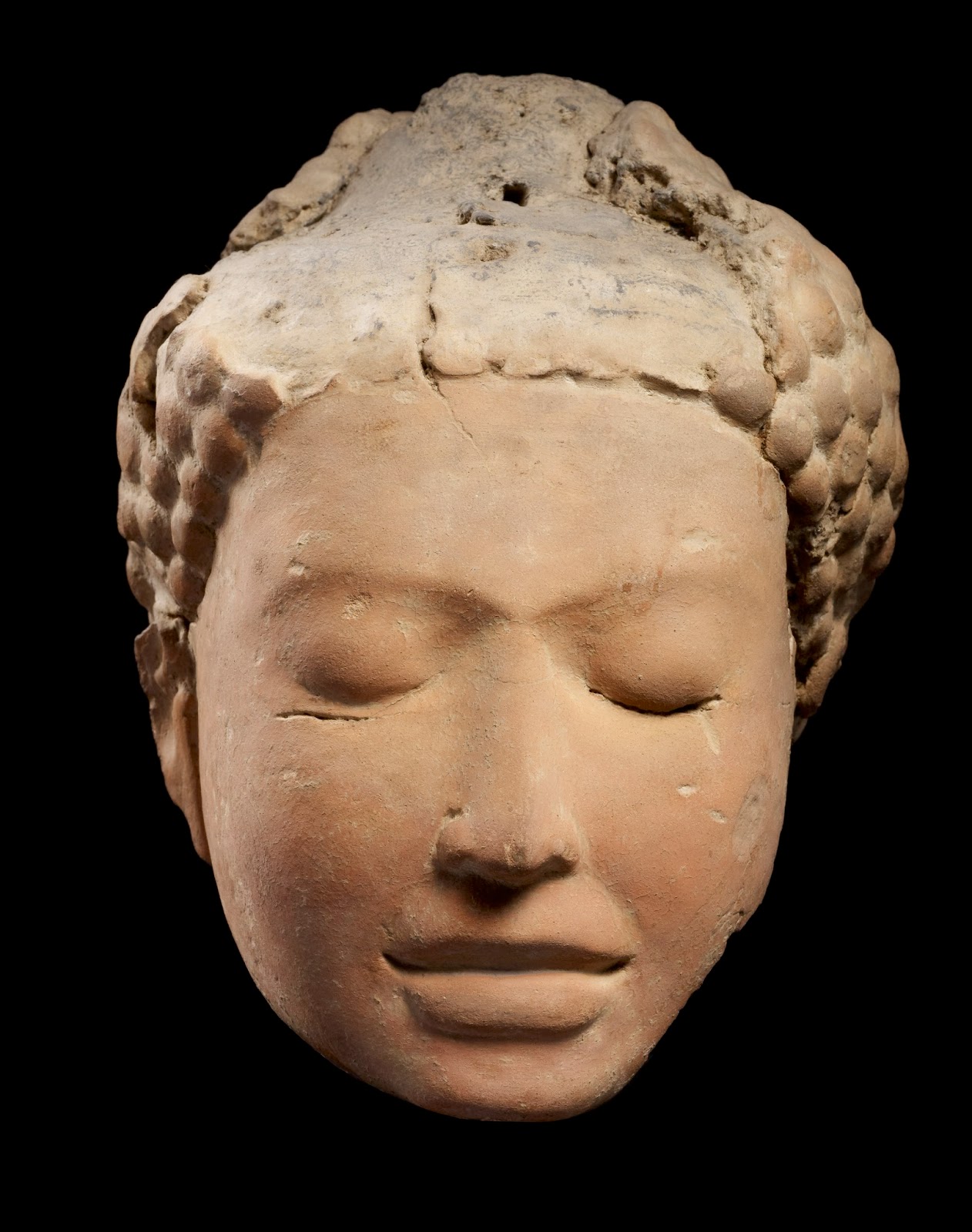 The wonder is that these works were loaned even to such a prestigious institution as the Metropolitan Museum. To grasp the magnitude of the quality and number of the masterpieces of Asian art on display in Lost Kingdoms, one would have to conceive of an exhibition of Renaissance art featuring the Louvre's version of Leonardo's The Virgin of the Rocks, The Birth of Venus from the Uffizi and Titian's Bacchus and Ariadne from the National Gallery in London.

The standing sandstone Buddha from Thailand, which serves as the exhibition's promotional image, is representative of the exceptional caliber of the works of art in Lost Kingdoms. Lent by the National Museum, Bangkok, this contemplative Buddha dates to the first decades of the seventh century. 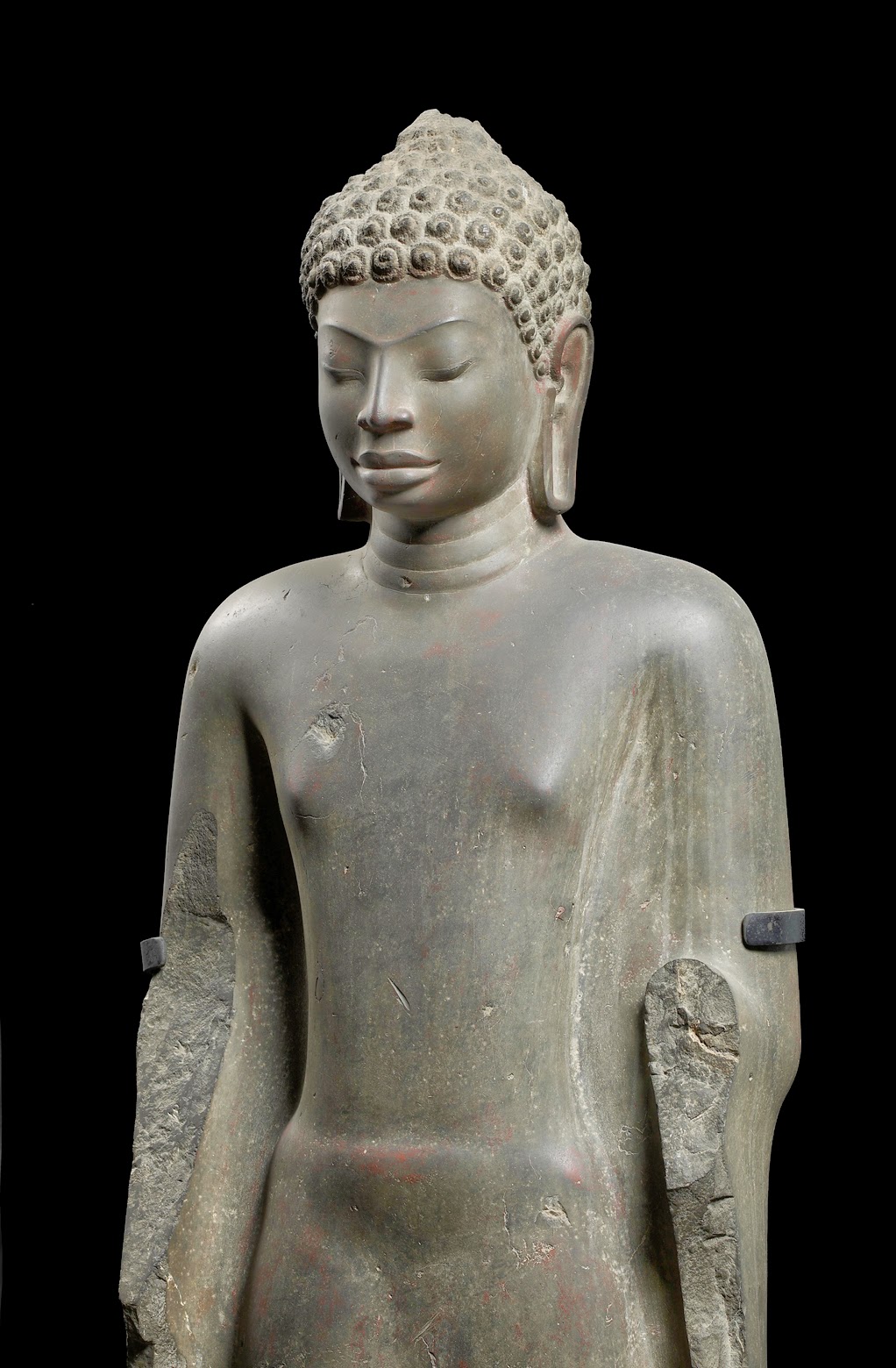 In keeping with the traditional elements of Buddhist iconography, this Buddha is depicted with closed eyes and elongated earlobes, the result of having worn heavy earrings before renouncing the use of jewelry. The polished texture of the statue recalls two of the lakshanas, or distinguishing body features that testify to the Buddha's spiritual nature, namely the smooth and shining skin of the Buddha.

One of the key aspects of Lost Kingdoms is the diversity of the depictions of the Buddha. These differences are due in part to regional or cultural interpretations that could be expected from the wide geographical range of the exhibition. However, some of the variations are of a more primal nature, revealing differing conceptions of the nature of God.

The Buddha from Thailand exudes a feminine character of divinity that is strikingly dissimilar to the virile, broad-shouldered Buddha Offering Protection from the National Museum of Cambodia. 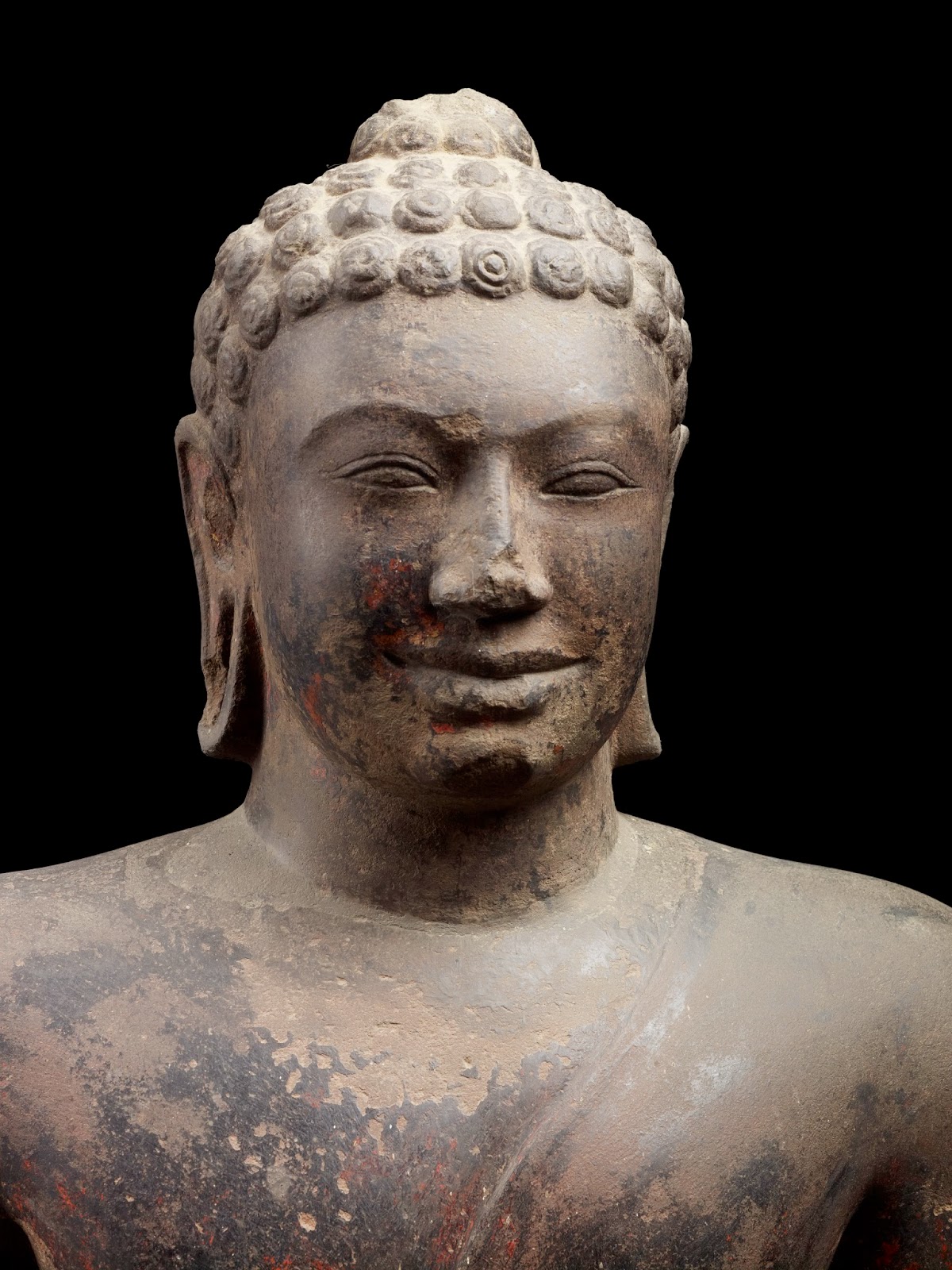 Created slightly earlier during the second half of the sixth century, this portrayal of the Buddha manifests the strength and redemptive traits that are also features of several statues of Vishnu on display in the exhibition.

The dramatic title of the exhibition, Lost Kingdoms, is entirely appropriate. For large stretches of time, these beautiful works of art were all but lost to view. Even the great temples and shrines of Southeast Asia had retreated before the spread of new religions and the encroaching rain forest.

Borobudur, on the Indonesian island of Java, is the site of the largest Buddhist temple complex in the world. But after Indonesia's conversion to Islam in the 1300's, this holy shrine, built in the ninth century, became the "stuff of legend." In 1814, the British explorer and founder of Singapore, Sir Thomas Stamford Raffles, was told of its existence by local inhabitants. Likewise, Angkor Wat languished unknown to the outside world until "discovered" by an intrepid French scholar, Henri Mouhot, in 1858.

The arrival of Hinduism and Buddhism in Southeast Asia is even more shrouded in mystery. Wandering Buddhist missionaries and Brahman priests, Hindu merchants and people of noble status brought these great faiths to the lands of Southeast Asia. Angkor, originally a Hindu temple complex, was built by a royal dynasty which came to Cambodia from Java.

The arrival of Hinduism and Buddhism in Southeast Asia was not a matter of passive acceptance. The Khmer Empire of Cambodia, the Champa Kingdom in Central Vietnam, the Pyu city states in Myanmar and the Dvāravatī state in Thailand (which may have been a confederation of independent city states) were vigorous political entities who effectively utilized their position on the trade routes from India to China. But these states did not have sophisticated religious cults to match their political and economic power, making them fertile ground for the great faiths from India.

The earlier animistic cults of Southeast Asia did not give way without resistance. But Hinduism and Buddhism, sometimes in a competitive relationship, could not be denied. The statue of the Hindu goddess, Durga Mahishasuramardini, depicts her standing on the corpse of the Buffalo demon which represents the displaced cults. 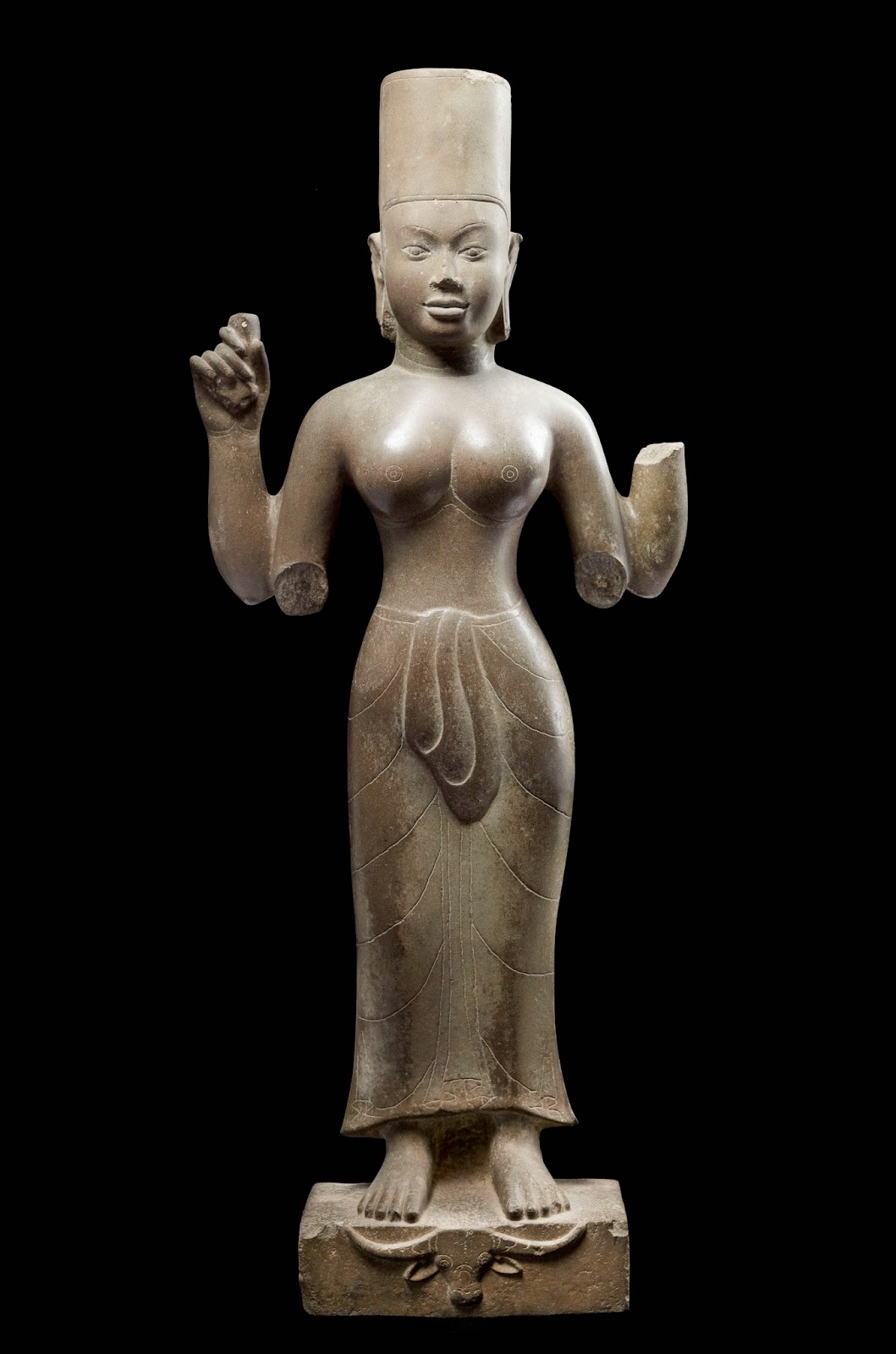 This depiction of Durga, from Cambodia, dates from the late seventh to early eighth centuries. Durga, one of the supreme deities in the Hindu pantheon, here radiates a transcendent power combined with beauty that accounts for the appeal of the Hindu gods to the ruling elites of Southeast Asia.

Another of the exhibition's most powerful works of art is devoted to Krishna, the eighth avatar or incarnation of Lord Vishnu. This sculpture is the Krishna Govardhana, from the early seventh century. In 1944, it was discovered in fragments in a cave near the site of the ancient city of Phnom Da in southern Cambodia. 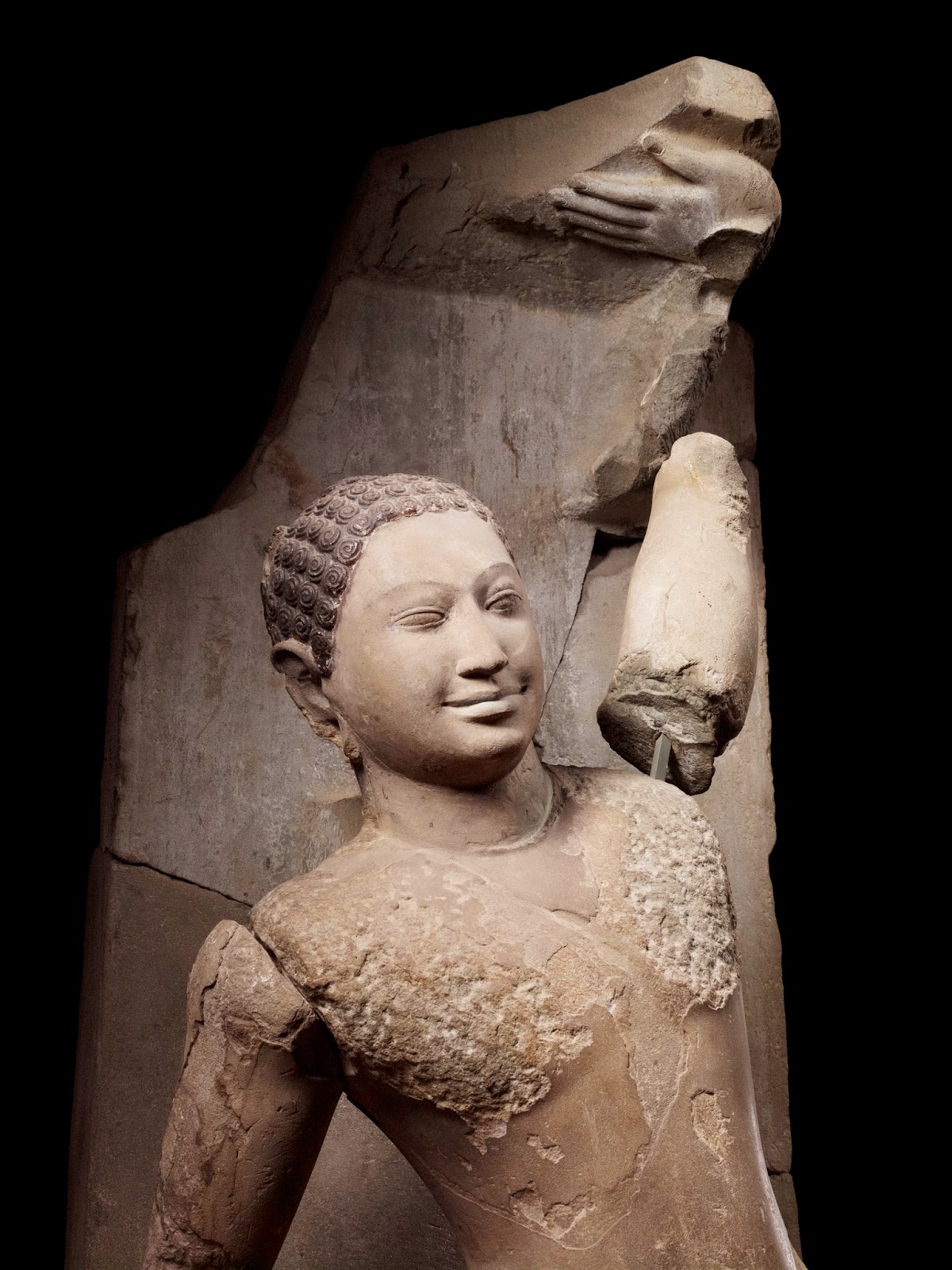 According to Hindu mythology, Krishna saved villagers and their cattle from destruction by the vengeful god, Indra, who sent a typhoon to destroy them. Krishna lifted a mountain, Govardhan, and held it aloft over the people and animals to fend-off the storm. This is a frequently depicted incident in Indian art and in some respects is a counterpart to the story of Noah in the Jewish and Christian scriptures, representing the providential power of God. 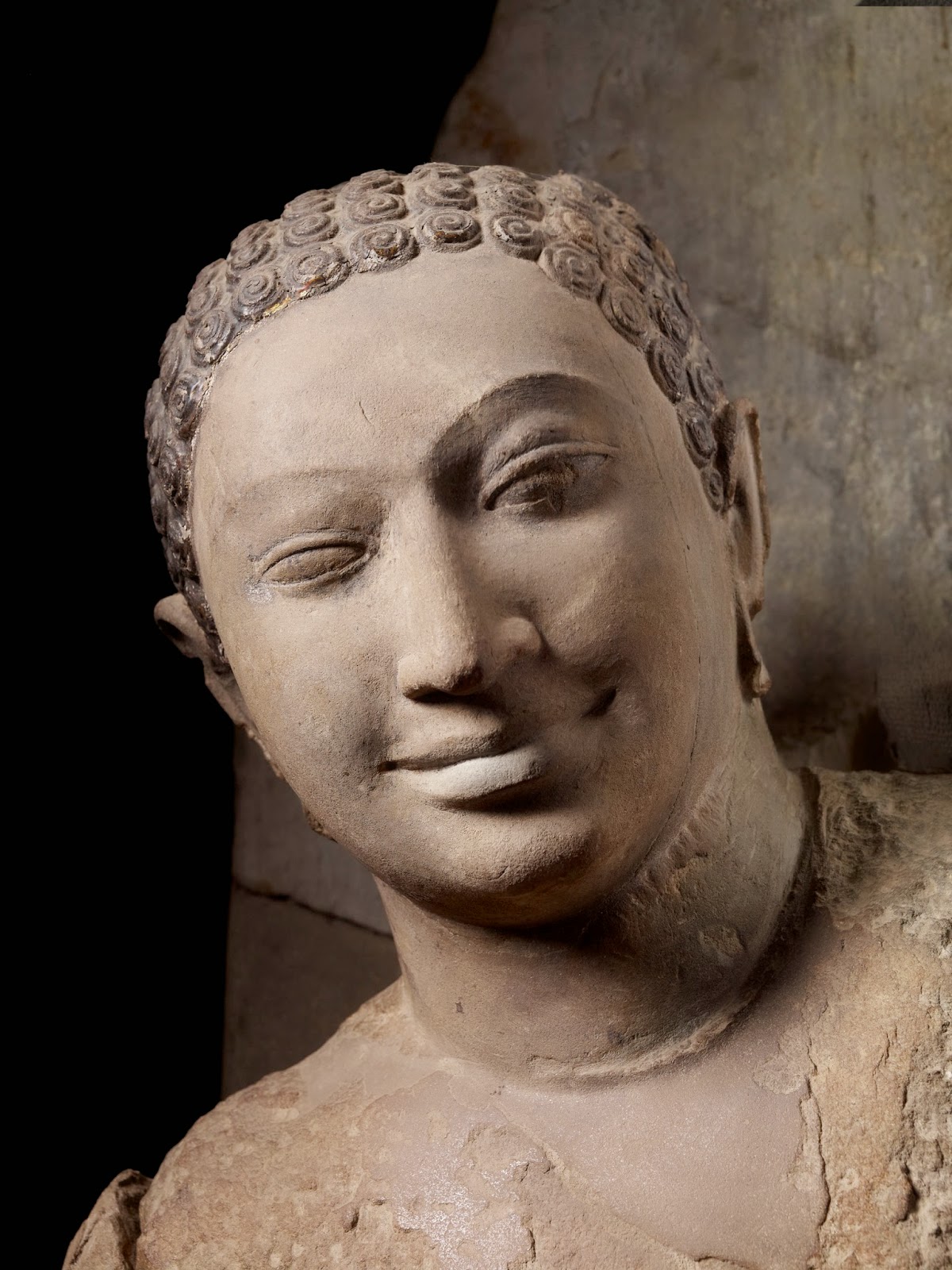 The Krishna Govardhana from the National Museum of Cambodia, even in its fragmentary condition is remarkably powerful. The expression on Krishna's face recalls the unearthly "archaic smile" of an ancient Greek kouros statue from the sixth century BC. Just as the Greek kouros beamed with an expression of the virtuous character or arete of the hero or god depicted, so too does Krishna as he faces down the vengeful Indra. The smile of Krishna Govardhana radiates his benevolence towards humanity and his confidence in beating back the forces of cosmic disorder and irrational behavior.

Indeed, the overwhelming sensation that one has when beholding these Buddhist and Hindu sculptures is that they represent a key moment in the evolution of the human psyche. Compassion was a rare emotion in the early epochs of humanity. But as you behold these sculptures of meditating Buddhas and beneficent Krishnas, one after the other, the effect is profoundly moving. Here one senses that the spread of Hinduism and Buddhism to Southeast Asia marked the beginning of the globalization of spirituality that, despite theological differences, is uniting the peoples of the Earth.

The concluding gallery is devoted to the Savior Cults of Buddhism. This concept represented a humanization of the religious ideals of Buddhism. It centered on the role of saintly and compassionate beings, the bodhisattvas. Originating in India, the concept of the bodhisattva as an individual seeking enlightenment was widely embraced in Southeast Asia. Regional or national characteristics were grafted on to the original ideal to give it unique manifestations. Bodhisattvas could be male or female, kings or commoners.

Avalokiteshvara is the highest manifestation of the bodhisattva. Dedicated to helping all sentient beings, Avalokiteshvara took a vow to delay his Buddhahood to assist others achieve enlightenment. The stylistic range of the statues depicting this self-sacrificing bodhisattva is very wide indeed, even within the borders of a single country. The exhibit presents two versions of Avalokiteshvara from Thailand that appear to originate from two very different countries or cultures. 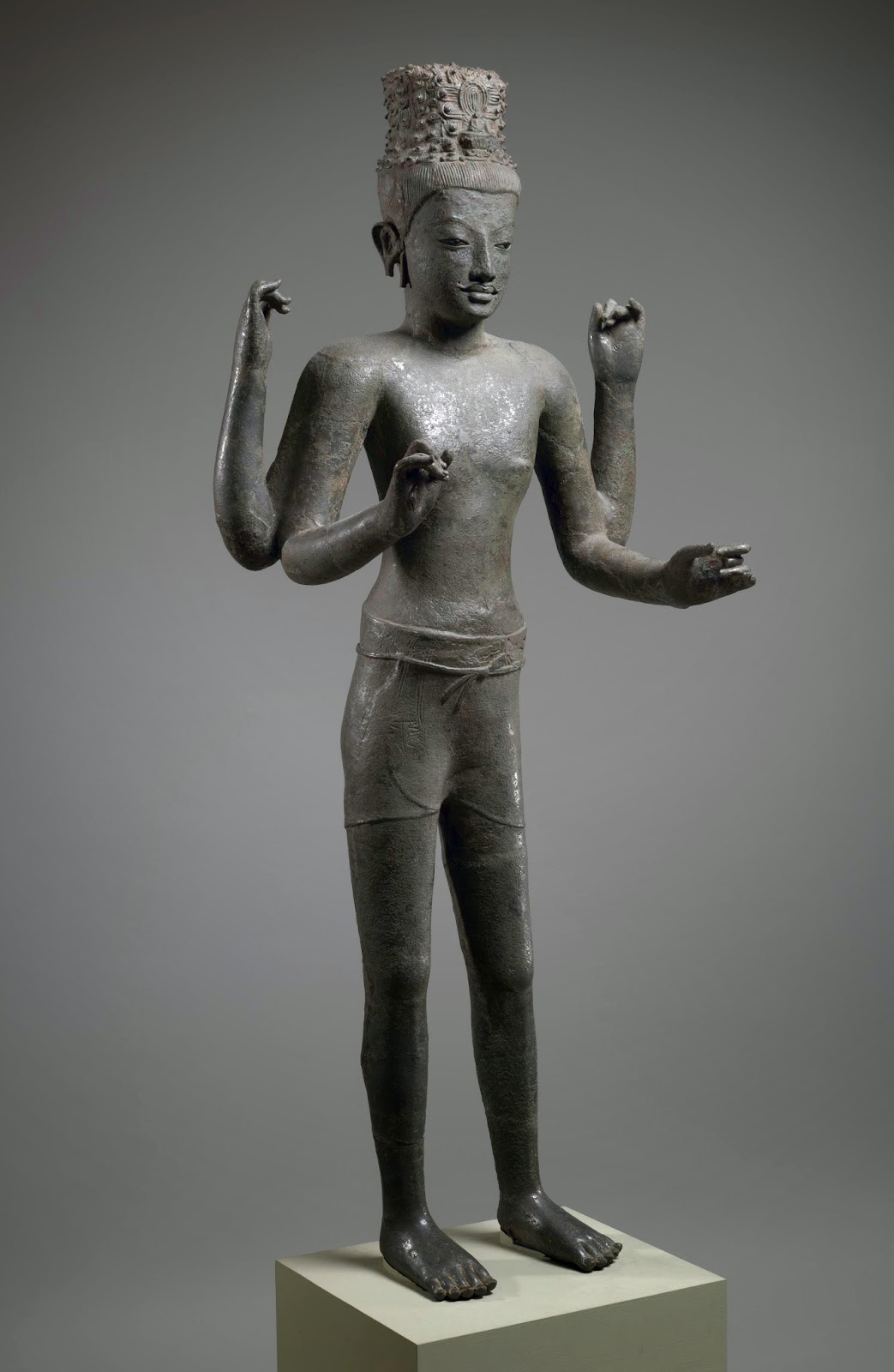 Bodhisattva Avalokiteshvara
The lean, simply clad Avalokiteshvara, cast in copper alloy, is thought to have been commissioned by an ascetic group, the Sri Canasa, about which very little is known. 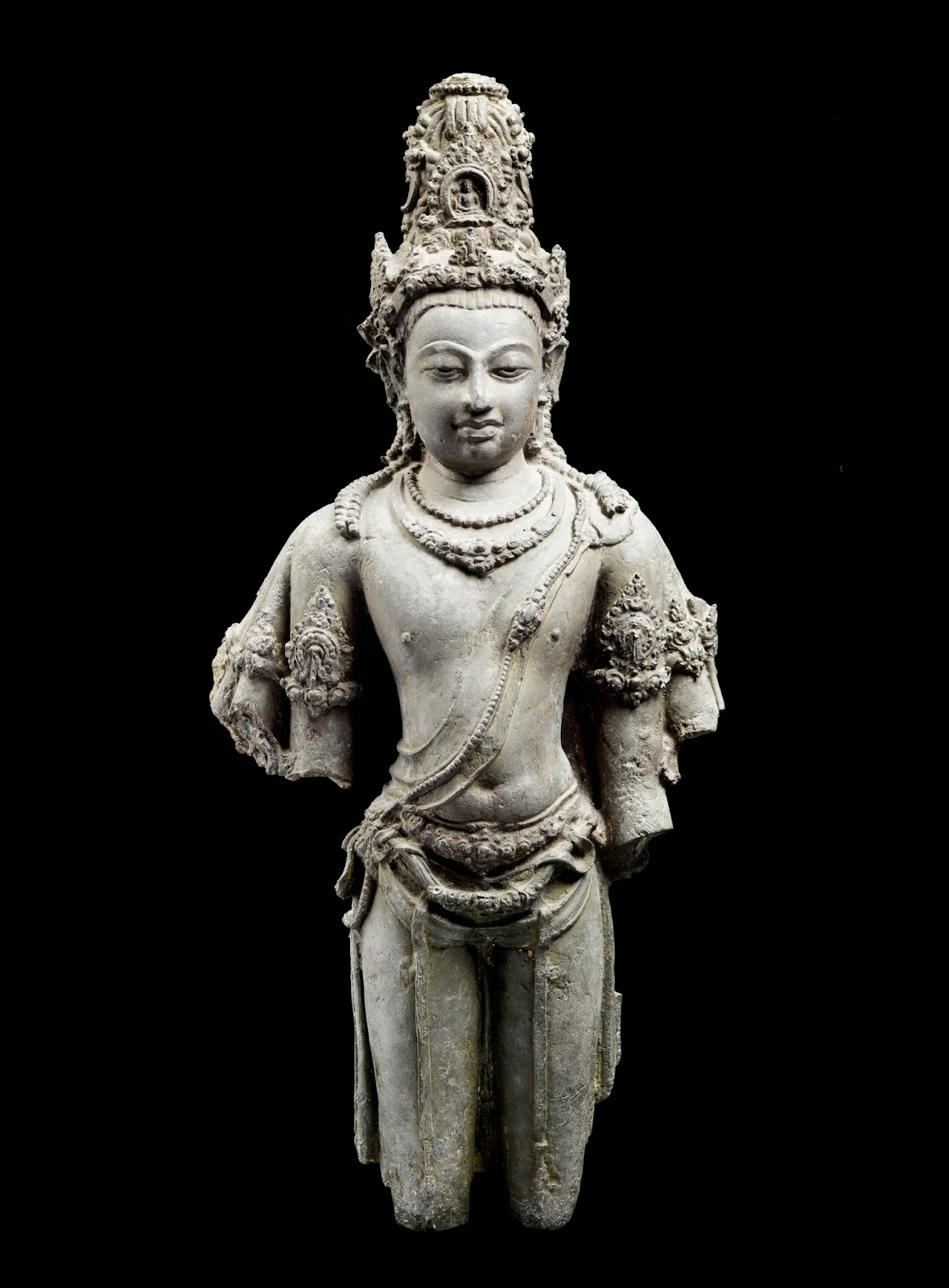 Bodhisattva Avalokiteshvara
The second, more elaborate, version was also cast in copper alloy, though it shows traces of gilding. It dates from the late eighth century, only a few decades later. However differently they may appear, both sculptures radiate great spirituality, the power of enlightened dedication to the welfare of all humanity.

It is a sobering thought to realize that the religious values, so powerfully expressed in the sculptures assembled in the Metropolitan exhibit, did not lead to an age of peace and harmony for Southeast Asia. What occurred in Medieval Europe after the adoption of Christianity, happened in these rising kingdoms on the trade routes to China. Kings built vast temples dedicated to Vishnu or Buddha and then marched to war, burning the temples of Vishnu or Buddha built by their rivals.

Nirvana is not of this world. There are moments, though, when transfixed by the beauty and spiritual resonance of this once-in-a-lifetime exhibit, that a state of enlightenment seems not far off.