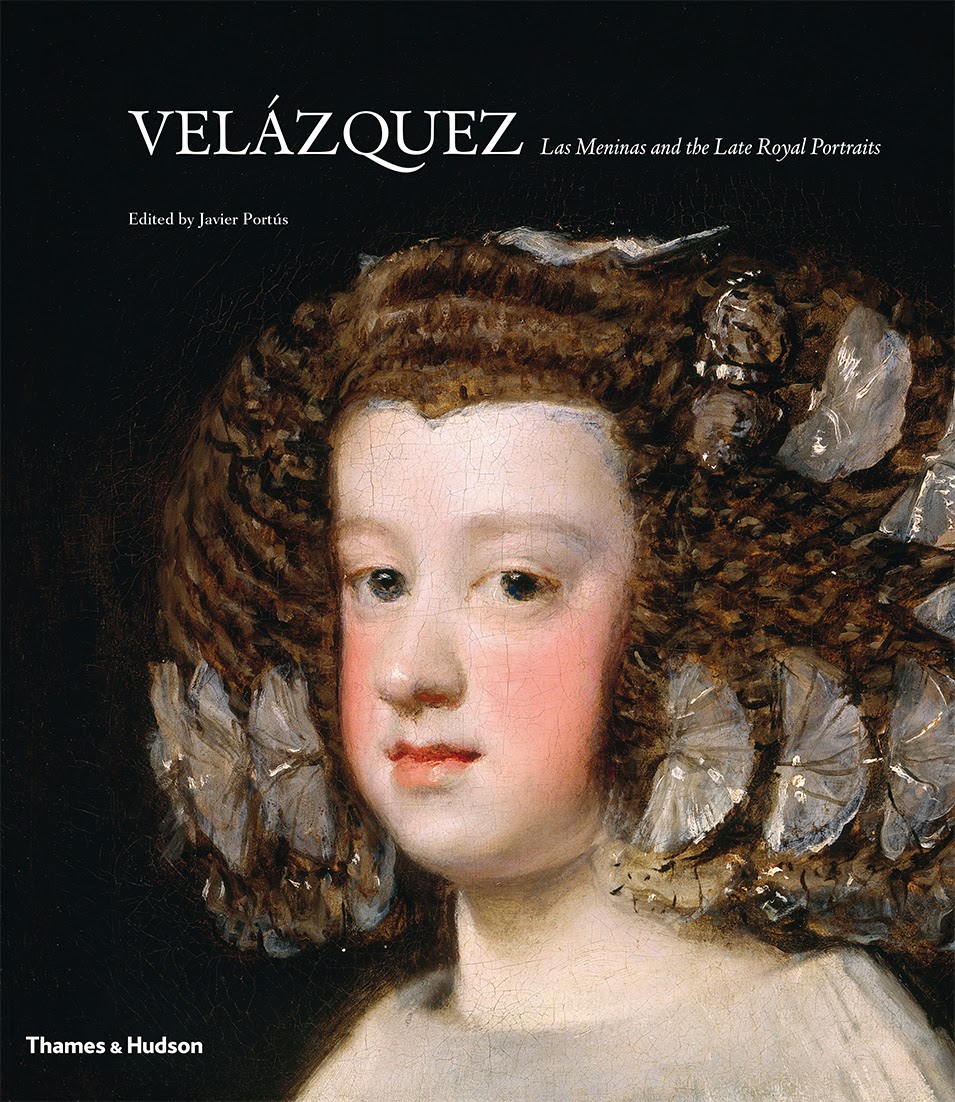 
On the night of December 24, 1734, a disastrous fire struck the Royal Alcázar, one of the palaces of the Spanish monarchy. The Alcázar was a rambling, time-worn structure which had originally been a Moorish castle. It was also the site where much of the vast and unrivaled art collection of the Spanish kings was displayed. Works by Leonardo da Vinci, Caravaggio, Peter Paul Rubens, Anthony van Dyke and the great masters of the Spanish School graced its walls. Almost all of the 500 paintings in the Alcázar were burned to cinders.

With desperate courage, members of the Alcázar staff battled the flames and managed to save several of the paintings. These were cut from their frames and flung out windows before they were consumed in the inferno.

Las Meninas is now recognized as the greatest Spanish work of art of all time. It is the subject of a superb, if somewhat somber, book just published by Thames & Hudson.

Why the down note for a painting that survived "a near-run thing," to borrow a favorite phrase of the Duke of Wellington?

Velázquez's masterpiece records a fleeting moment of court life during the reign of King Philip IV (1605-1665). Las Meninas was created just at the point when the bankrupt, battle-weary Spanish Empire began its long retreat from global power. That's not what Velázquez intended of course. But Las Meninas, painted in 1656, was Velázquez's final masterpiece and the last great achievement of Spain's Golden Age.


Life is brief, even for empires. Art is long.

Velázquez, Las Meninas and the Late Royal Portraits is a companion volume to the recent exhibition at the Prado Museum in Madrid. Don't expect this exhibit to make a world tour. Spain does not lend Las Meninas and for good reason. One brush with oblivion is enough.

The present volume is certainly a worthy consolation prize. The scale and fidelity of the lavish color illustrations are outstanding. The caliber of the art historians who supplied the insightful commentary is exceptionally high as well. The team of art scholars includes Javier Portús, the head of the Prado's Department of Spanish Painting, pre-1700. In terms of Velázquez scholarship, this is the mountain top.

The exhibit and the companion book focus on Velázquez and two other Spanish court painters, Juan MartÍnez del Mazo and Juan Carreño de Miranda. Mazo and Carreño attempted to carry on the brilliant school of portraiture which Velázquez perfected. Both were skillful and accomplished artists but neither possessed the extraordinary talent and perception of Velázquez. Mazo, Velázquez's son-in-law, occasionally approached the great master's workmanship but largely, as we shall see, at the expense of his own originality.

The sobering aspect of Velázquez, Las Meninas and the Late Royal Portraits relates to the fact that these magnificent paintings record the passing of Spanish cultural vitality, as well as of the political hegemony of the Spanish monarchy. Despite the incredible artistry of Las Meninas and the praiseworthy efforts of Mazo and Carreño, the decline of Spain could not be disguised.

The Spanish royal family was a branch of the Hapsburgs of Austria and the frequent intermarriage of the two households came close to being incestuous. Philip IV married a French princess, Isabel de Borbón, in an attempt to bring "new blood" to the Spanish Habsburgs. Although the marriage was a happy one, France under the leadership of Cardinal Richelieu, blind-sided Spain by supporting the Protestant powers arrayed against it in the Thirty Years War.

In 1643, the marriage of Philip IV and Isabel suffered a staggering loss of the kind that haunted all the monarchies of Europe. Crown Prince Baltasar Carlos, a lively and intelligent boy whom Velázquez painted on several occasions, died from small pox. He was the only son of Philip IV and Queen Isabel, who followed her son to the grave a year later. 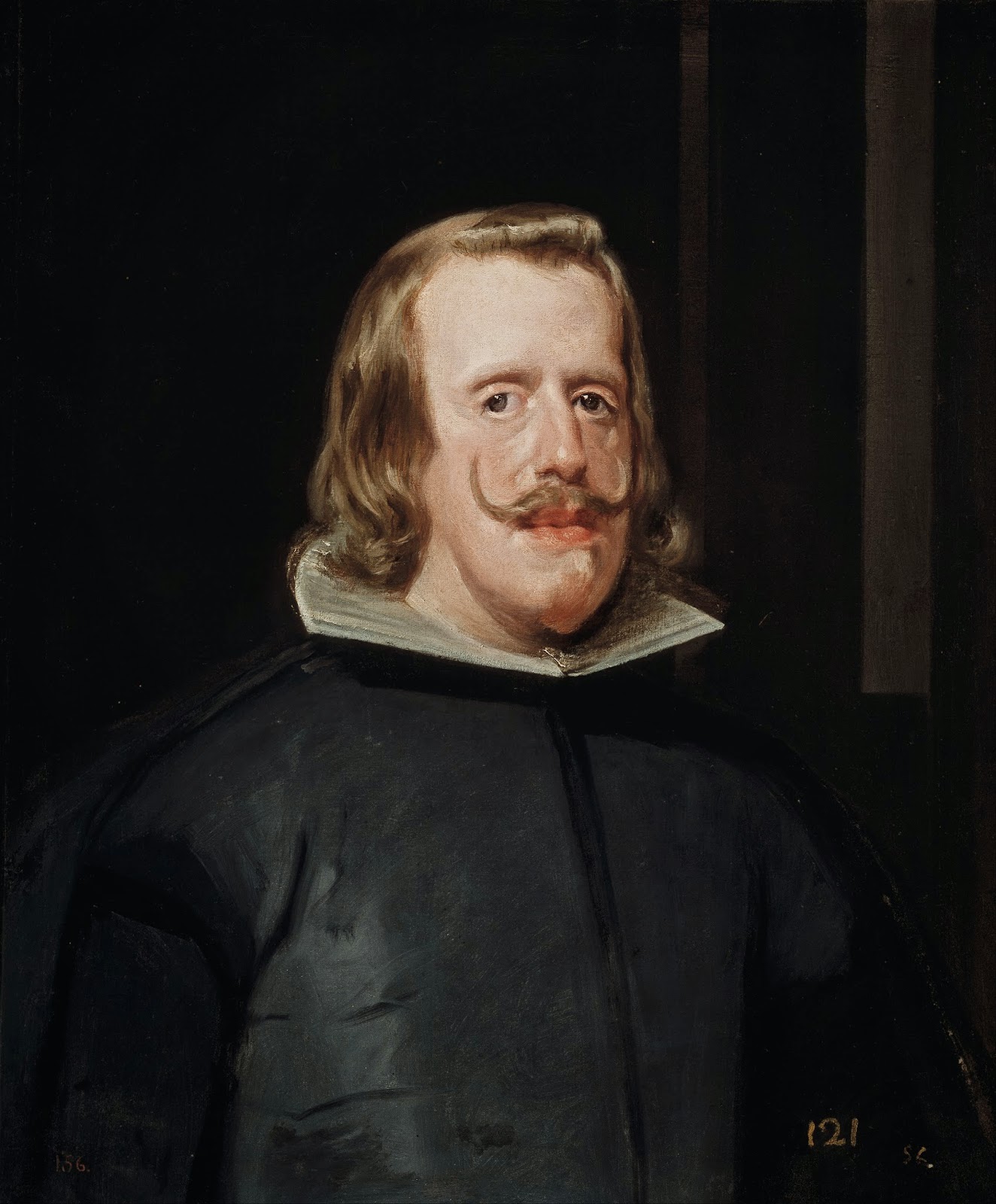 Philip IV faced the extinction of the Spanish line of the Hapsburgs. In an ill-fated move, he married his 15-year old niece, Mariana, of the Austrian Hapsburgs. Mariana had been betrothed to Baltasar Carlos. Philip was a decent man, though an ineffectual king, and the marriage in 1649 was not as perverse as it might seem. But the desired male heir was slow in coming.

Velázquez played a role in this dynastic marriage-brokering. A number of his portraits of the Spanish Hapsburgs, Baltasar Carlos and Philip, were sent to their Austrian relatives to help with the match-making. As a result, art museums in Vienna are relatively well-supplied with Velázquez paintings, where other art collections - except in Spain - are fortunate to own one. Even the Metropolitan Museum in New York had to pay a prince's ransom in 1971 to acquire Velázquez’s portrait of his Moorish servant, Juan de Pareja, now one of the jewels of the Met's collection.

Velázquez painted so many royal portraits in this late stage of his career that he risked the criticism of jealous rivals that he could "only paint heads." This had been a charge made early in his career and Velázquez had worked diligently to disprove it. But the call of duty required him to paint portraits. Velázquez created astonishing likenesses of Philip IV, with his upswept moustaches and sad, uncertain eyes, and Mariana, the young queen looking amazingly like Philip's surviving daughter from his first marriage , Maria Teresa. 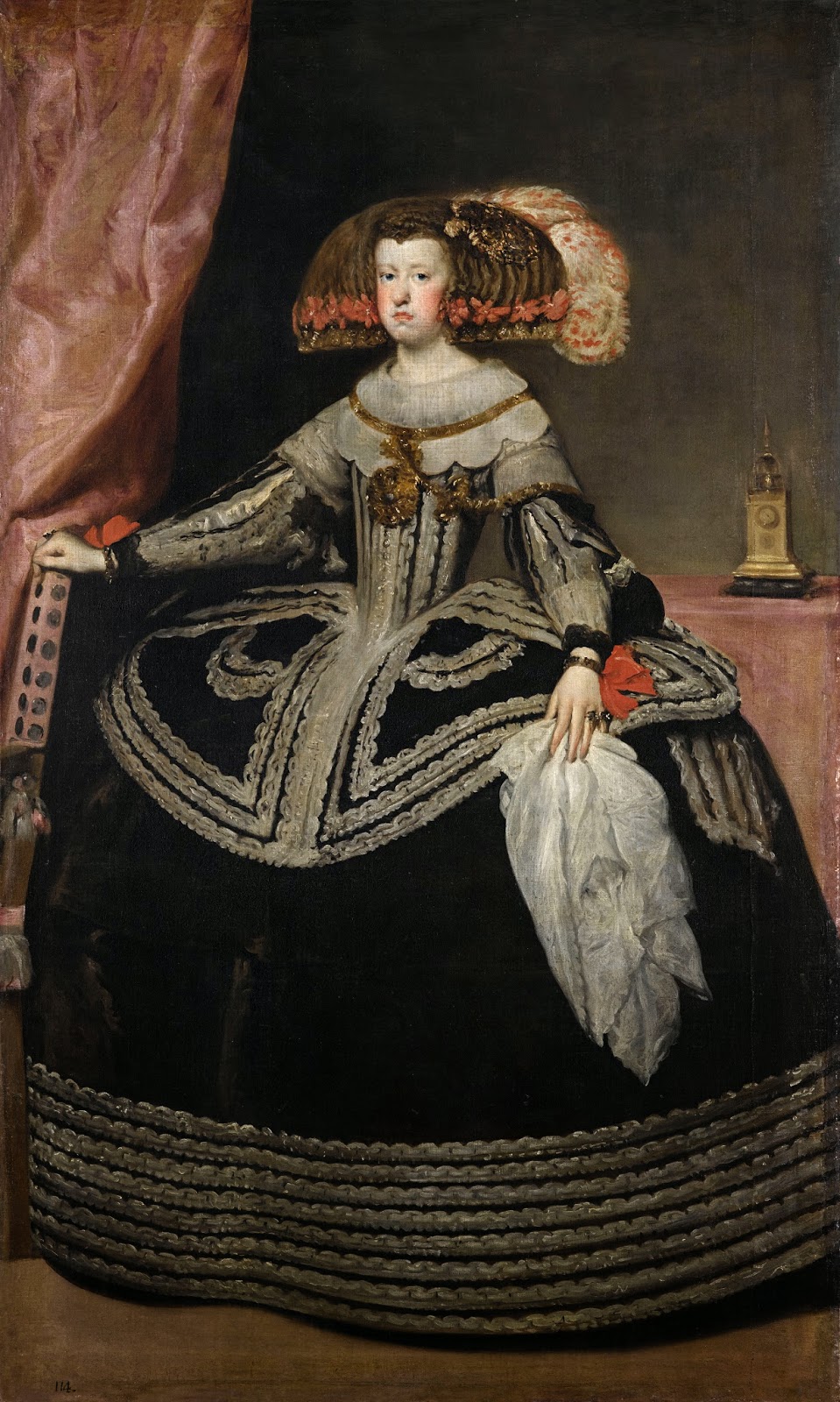 Eventually, children were born to Philip and Mariana. Velázquez painted the new son and heir, Felipe Prospero, in a stunning portrait in 1659. Velázquez depicted the infant prince wearing protective amulets and a badger's foot to safeguard him from harm. Felipe Prospero's brief life ended in 1661, a year after Velázquez died.

It was the daughter of Philip and Mariana, the Infanta Margarita, who was immortalized in Las Meninas. Accompanied by her maids-of-honor or meninas and court retainers, notably two dwarves, Margarita is illuminated by light from a nearby window. The angelic young princess turns her gaze from a canvas being painted by Velázquez and looks directly at her parents, unseen except as reflections in a distant mirror. She is also looking at us.

In terms of this review, further comment on this immortal painting is better directed to a smaller version long thought to be a preparatory study of Las Meninas. Javier Portús makes a very convincing case that it is a study after Velázquez. 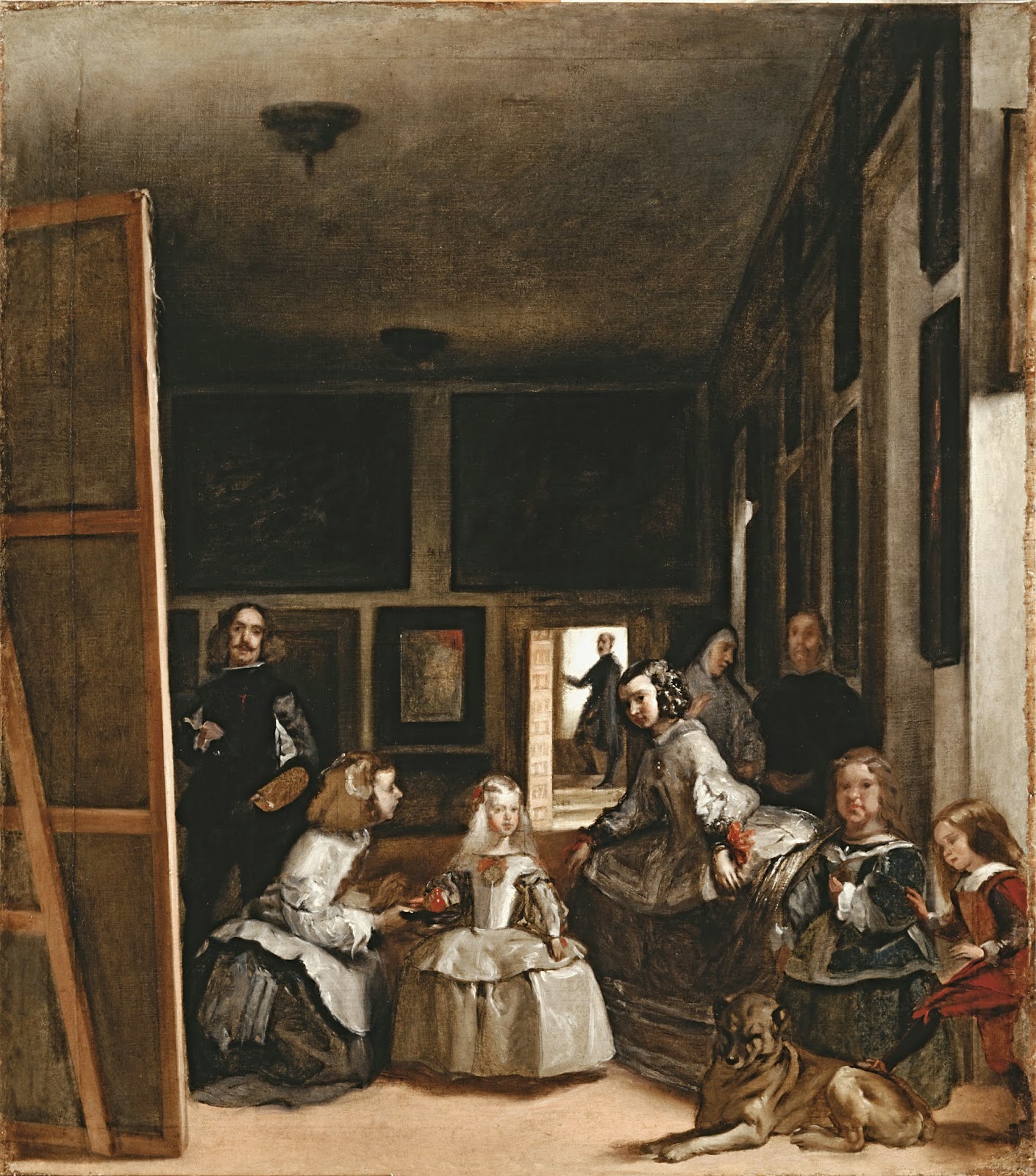 With trenchant detective work, Portús maintains that this heavily-painted work was done by Velázquez's son in law, Juan MartÍnez del Mazo (16 -1667). Only Mazo would have had the degree of access to the original of Las Meninas around 1660 to paint such an accurate copy. This is indeed an accomplished copy of Las Meninas. From the standpoint of Mazo's creative individualism, however, it is too good.

Mazo spent the rest of his life trying to paint like Velázquez rather than cultivating his own considerable talents and a unique style. Mazo came close in several works to achieving an artistic breakthrough, notably The Painter's Family. This is a charming group portrait of his children, born of two different wives, who are united on the canvas in loving familiarity.

Mazo proceeded to ruin the unity of The Painter's Family by including a smaller, separate scene in the upper right hand corner. This shows himself painting a portrait of the Infanta Margarita. Velázquez had used this technique with mixed effects early in his career, whereby figures in the foreground are contrasted with a background depiction of another incident, usually from sacred scripture. The danger lies in the distraction and confusion caused by the background scene. Often this appears to be a painting hanging on a wall rather than part of the action taking place in the pictorial space. This, sadly, is the case for Mazo’s The Painter's Family.

One should not censure Mazo too severely for this. He was attempting to safeguard the legacy of his father-in-law. Mazo was acting like a good Spaniard, too, trying to hold together the disintegrating "Golden Age" of Spain. By the 1660's, Spain’s political hegemony was beyond salvation. Sadly, that decade would also see the last ripples of the astonishing wave of creativity that had surged forth in 1605 with The Ingenious Gentleman Don Quixote of La Mancha and crested in 1656 with Las Meninas.

Juan Carreño de Miranda (1614-1685,) whose paintings figure prominently in the later part of the book, faced an even more impossible task than Mazo. Carreño's style was less painterly than Mazo's, but also more vigorous and better focused. Carreño, however, had to present Philip IV's surviving heir, Charles II, in a regal and commanding manner - a daunting task.

When Philip IV and Queen Mariana finally had a son who lived, the dangerous inbreeding of the Hapsburgs produced its predictable result. "Feeble-minded" Charles II came to the throne as a young child in 1665 and ruled to 1700. Sickly and mentally unstable, his personal traits matched those of Spain, the "sick man of Europe."

Carreño was called upon to create portraits of Charles II, depicting him as a "Planet King." This had been the proud title of earlier Spanish monarchs. It was an impossible task and Carreño failed despite dedicated effort. Velázquez himself would likely have done little better.

Spain collapsed as a great power and Velázquez's reputation went into an eclipse as well. He was rediscovered by Édouard Manet in 1860. Manet grasped the degree of mastery that Velázquez brought to his painting. Las Meninas and the other surviving masterpieces of Velázquez were works of art that provided exactly the kind of inspiration that Manet needed.

In the hands of Manet, Edgar Degas, John Singer Sergent and other "New Painters," the Spanish-style of the mid-nineteenth century triumphed over the neo-classicism of French Salon art. Velázquez's reputation soared and he was deemed the "first Impressionist." Careful study of his brushstrokes does indeed confirm Velazquez's pioneering use of modernist technique. As the eighteenth century Spanish writer, Antonio Palomino, had noted about Velazquez's brushwork , "one cannot understand it if standing too close, but from a distance it is a miracle."

Velázquez, Las Meninas and the Late Royal Portraits will de-mystify the creative process of Velázquez. But Palomino is certainly correct about Las Meninas. This iconic painting, that so nearly perished in the flames of the Alcázar, was and always will be a miracle of art.