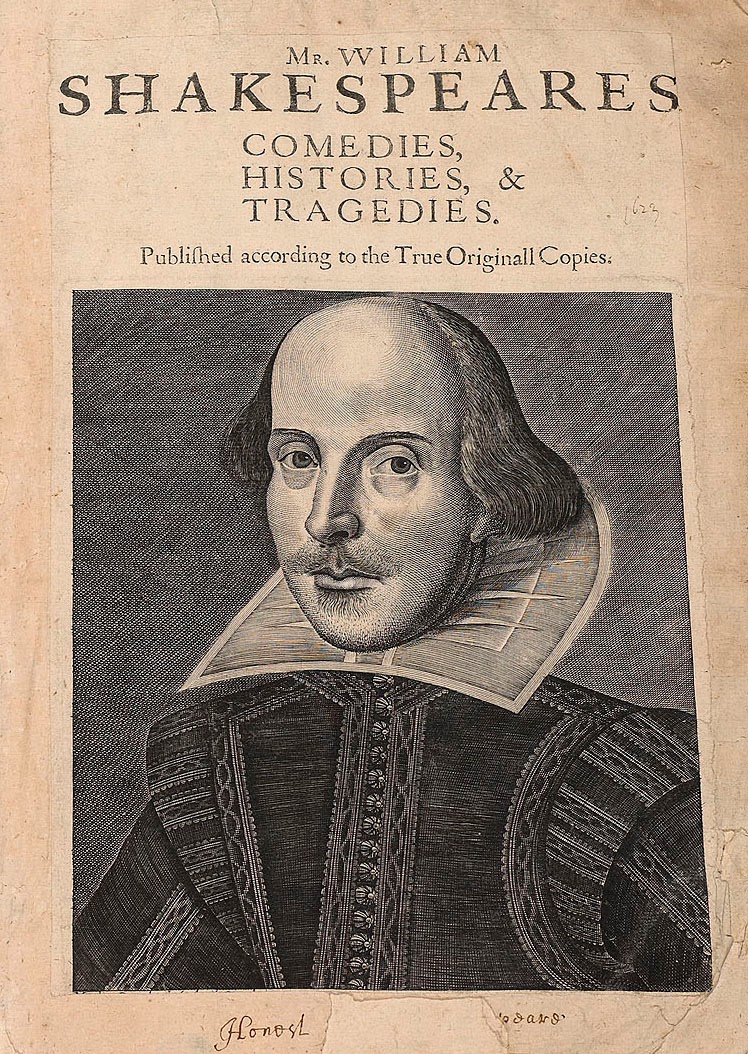 Marks of Genius: Treasures from the Bodleian Library


Reviewed by Ed Voves
An exhibition of some of the most important cultural creations in world history is currently on view at the Morgan Library and Museum in New York City. The fifty-eight objects on display represent humanity's need for creative expression and showcase the role of genius in shaping civilization.

Make that Genius with a capital G.


Marks of Genius: Treasures from the Bodleian Library highlights the profound importance to humanity of the inspired creator - artist, writer and composer. These are the people whom Daniel Boorstin referred to as "heroes of the imagination." Sappho, Moses Maimonides, William Shakespeare, George Frideric Handel, Jane Austin and J. R. R. Tolkien are all represented here with carefully preserved manuscripts and art works from the collection of Oxford University's Bodleian Library. 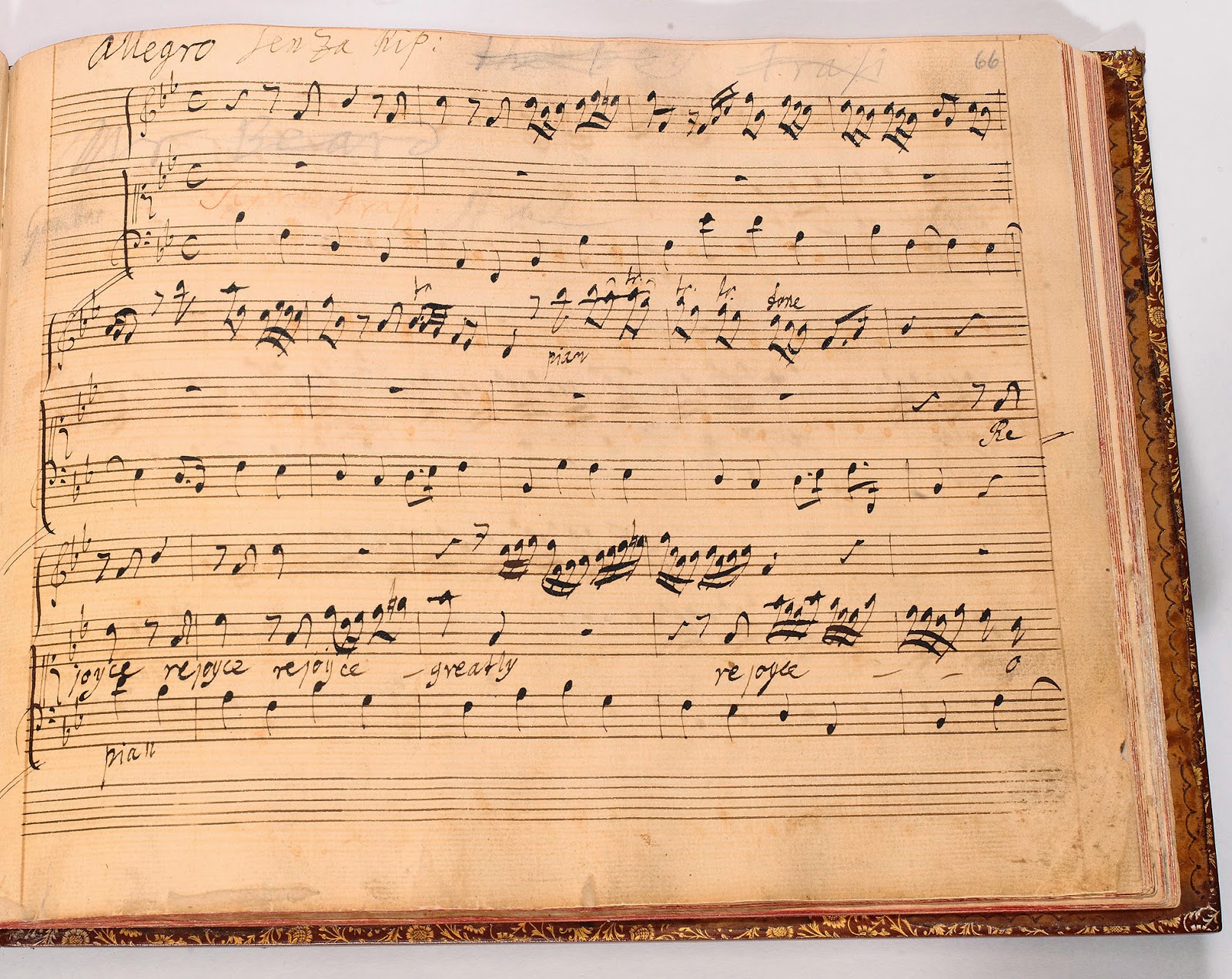 George Frideric Handel Original conducting score of Messiah , Sept.–Oct. 1741
The role of the genius or the "great man" in history has been aggressively contested since the 1950's. However a visit to Marks of Genius may cause you to reconsider this controversy. The exhibition definitely underscores the way that gifted individuals - i.e. "geniuses" - can change the way we think, see and hear for the better.


A person of genius certainly has no easy task in making his or her contribution to humanity. One of the most poignant and thought-provoking  objects in the exhibit  is a display of thirty scraps of papyrus on which are written verses by Sappho, the first (known) woman author in history.


Sappho, who lived from around 620 –550 B.C., was so highly esteemed during the classical era that she was referred to as the "tenth muse." Yet, only one complete poem by Sappho has survived, of the nine books of lyric poetry that she wrote. A few scattered fragments like these which date to a second century A.D. copy, have also come to light. The Bodleian fragments were found during the 1700's in a trash dump in Egypt. In an amazing feat of literary detective work they were later recognized as having been written by Sappho. 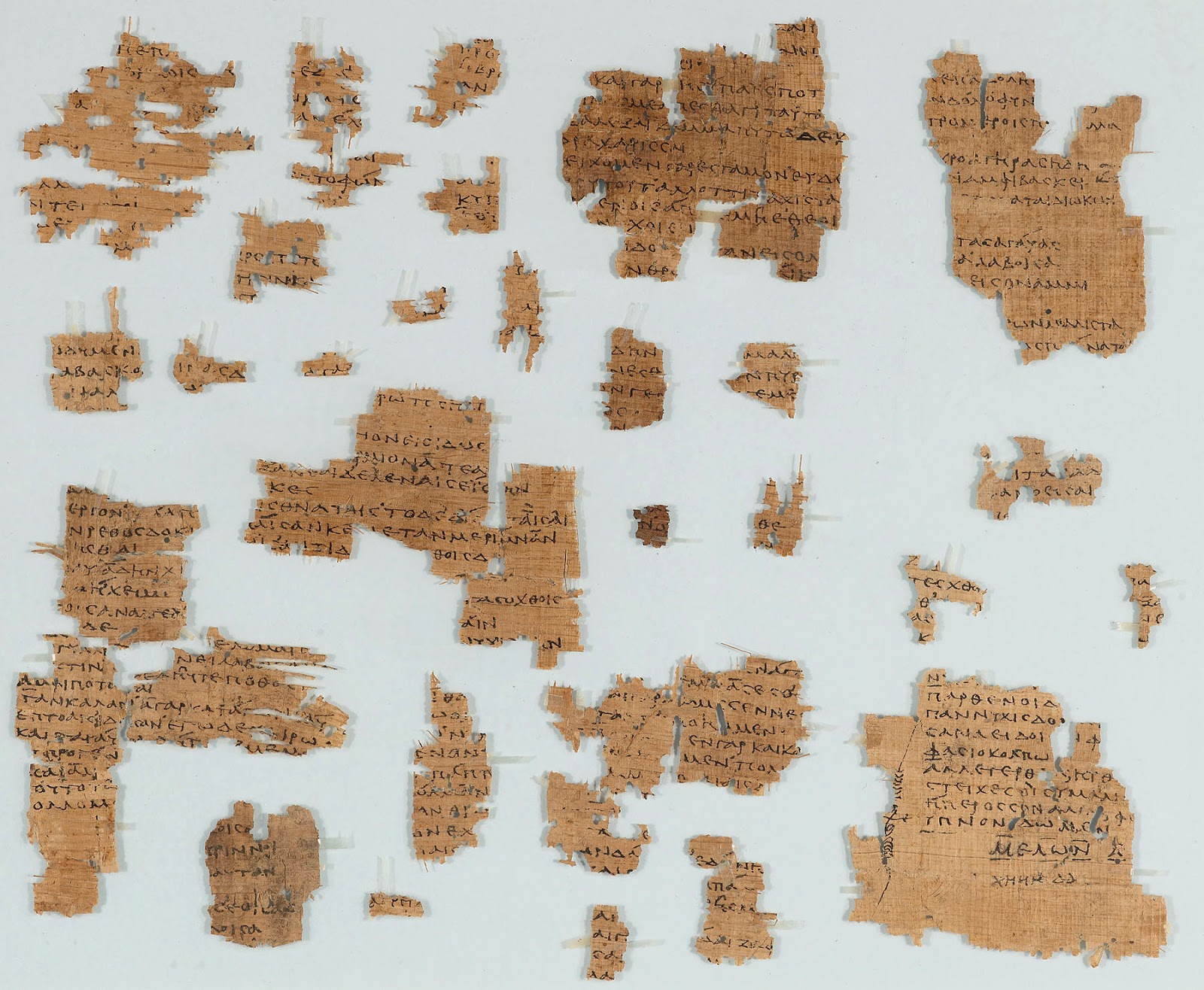 Sappho, Fragments of poems,  copies made in  second century AD


One of the surviving verses by Sappho has a timeless message, one that the combative Greeks of her era failed to heed and we in the twenty-first century appear equally unable to grasp:

For some, it's an army of chariot fighters, for others, an infantry corps,
For others, an armada of sailing ships, on the dark face of this earth,
That is the loveliest thing of all, but I say it’s this and nothing more:
Whatever you desire with love in your heart.


The exhibition commentary for the Sappho fragments warns of "the vulnerability of even the most famous ancient literature." The ravages of war and religious fanaticism, environmental disasters and the decay inflicted by "moth and rust" take a heavy toll of the "works of genius."


The Bodleian Library, in an earlier incarnation, had been a casualty of the wave of Protestant iconoclasm that had purged England of most of its medieval art and manuscripts, commissioned by the deposed Roman Catholic hierarchy. In 1602, Sir Thomas Bodley, a retired diplomat, conceived the idea of restocking Duke Humfrey's Library at Oxford with theological works to serve what Bodley called the "republic of the learned."


Eight years later, Bodley conceived an even better idea, indeed a master stroke. In 1610, Bodley appealed to the Stationers Company, the government-chartered guild that regulated England's publishing industry. Bodley petitioned that august body to reserve one copy of every book published in England for the Bodleian. Bodley's empty library thus became the world's first deposit library and a direct forerunner of the Library of Congress.


In 1623, the Bodleian received the first or "copyright" copy of the most famous book ever written in the English language. This was Mr. William Shakespeares Comedies, Histories & Tragedies. Of course nobody at the time realized the eventual status of the book we now call The First Folio. The Bodleian copy is one of the star exhibits of Marks of Genius. 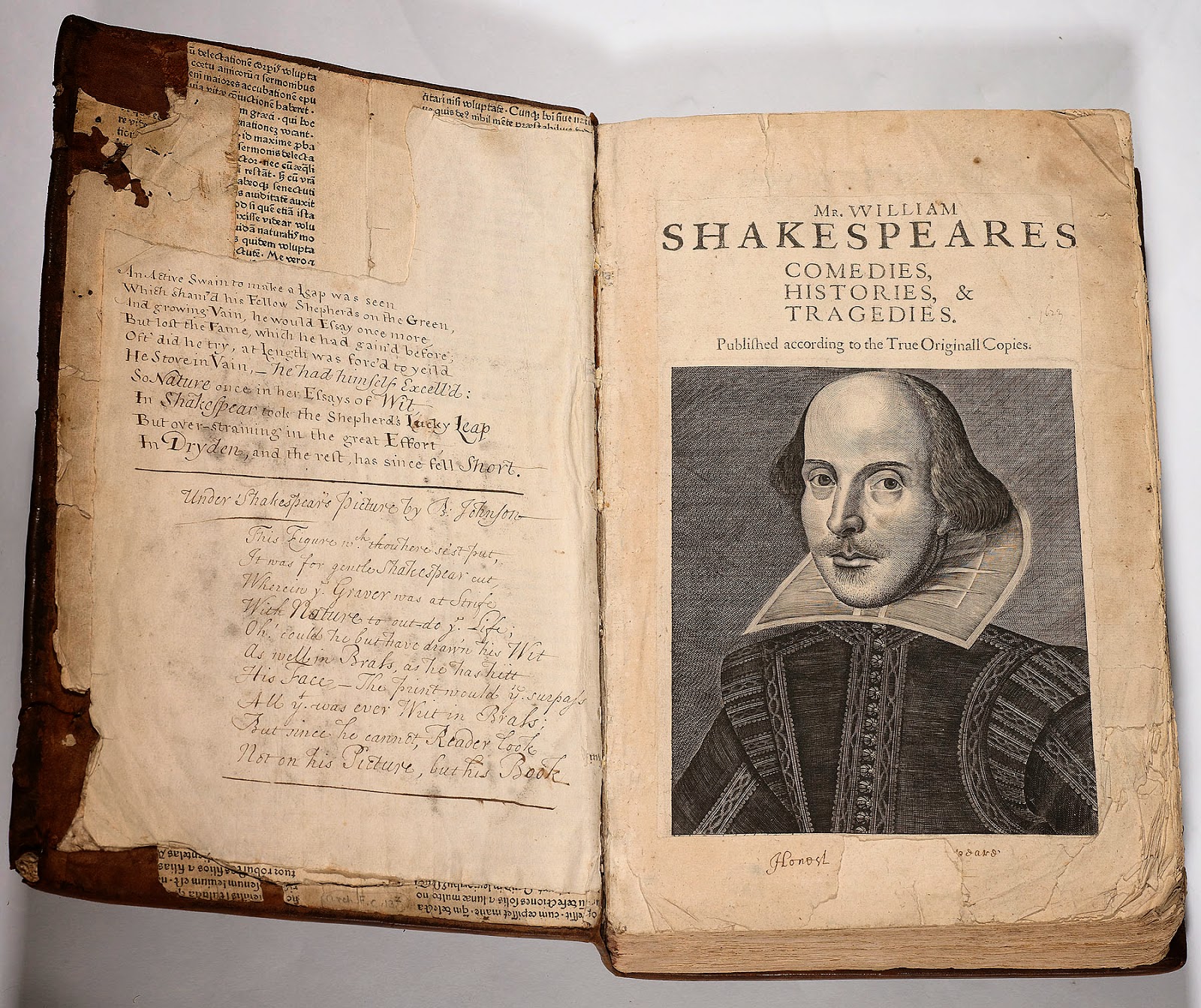 
It was a singular stroke of good fortune that the First Folio was published by Shakespeare's friends and fellow actors so quickly after his death in 1616. Incredibly, Shakespeare's reputation went into an eclipse, soon after. This was further compounded when theater-going in England was banned during the Civil Wars which climaxed with the execution of King Charles I in 1649.
Theater made a comeback in 1660 with the Restoration of King Charles II. A new folio edition of the works of Shakespeare was published in 1663. This was the Third Folio, even rarer today than the First, as most are believed to have been lost in the great fire of London of 1666.


Once the "copyright" Third Folio reached the Bodleian, some efficiency-minded member of the staff figured that one edition of Shakespeare was enough. The Bodleian's First Folio was sold and dropped out of sight. Later generations of scholars could only shake their heads in dismay.
The Bodleian got lucky – very lucky. In 1905, a student at one of the Oxford colleges brought the ex-Bodleian First Folio back to the library without realizing what it was or its value. It had been in his family’s possession for decades and was still bound in its original cover. After word leaked out, an anonymous American bibliophile offered the astronomical sum of £3,000 to purchase the First Folio. In a very-English fund-raising effort – no contribution too small – the Bodleian countered the offer and bought back its very special Shakespeare volume.

The First Folio, edited by Shakespeare’s colleagues, John Heminge and Henry Condell, is indeed a very special book. It ensured that all-but two of the Bard’s plays were published for posterity. The First Folio is the unique source for eighteen of Shakespeare’s plays. Without the First Folio, we would not have a number of the greatest plays including Julius Caesar, Macbeth, Cymbeline, Twelfth Night, The Winter’s Tale and The Tempest.


With the Bodleian First Folio on display, Marks of Genius engenders a sense of the mystery and wonder of creative endeavor. Similar treasures include a page from the 1816-1817 manuscript of Frankenstein and personal "keepsakes" owned by the author of this pioneering “sci-fi” novel, Mary Wollstonecraft Shelley. Another special object from the realm of the fantasy is J. R. R. Tolkien's personal design for the dust jacket of the first edition of The Hobbit, 1937.


Marks of Genius is not exclusively devoted to the achievements of independent “heroes of the imagination.” The exhibition is arranged to highlight the “genius loci” or spirit of place. The influence of geography or national heritage marks these contributions to the human community.


Attention to collaborative effort is also made, with reference to the famous remark that great inventions and scientific discoveries are rooted in the pioneering works of others. Genius, as this time-honored expression affirms, always stands “on the Shoulders of Giants.” The numerous maps on display in the exhibition offers special testimony to our debt to the past.  John Smith's Map of Virginia, published in 1612, despite its inaccuracies, provides information on the Native American inhabitants of the the Chesapeake Bay region that would be otherwise lost  to history. 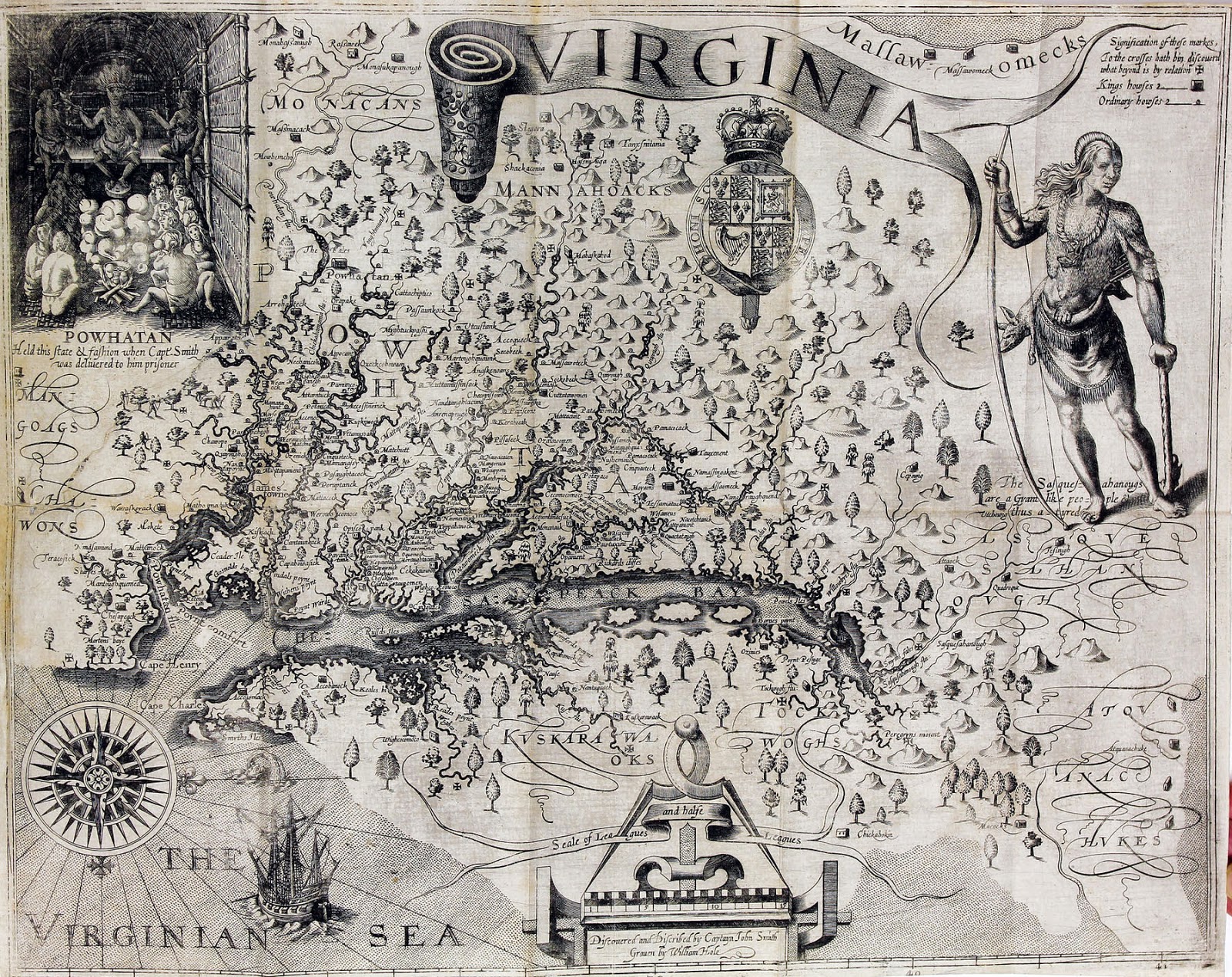 John Smith, Map of Virginia, 1612
One of the most prized examples on display is the Bodleian’s copy of Magna Carta, the charter of rights and liberties which the rebellious nobles of England forced King John I to sign in 1215 at the famous confrontation at Runnymede. The long evolution of Anglo-American legal freedom is traditionally dated to this historic event. 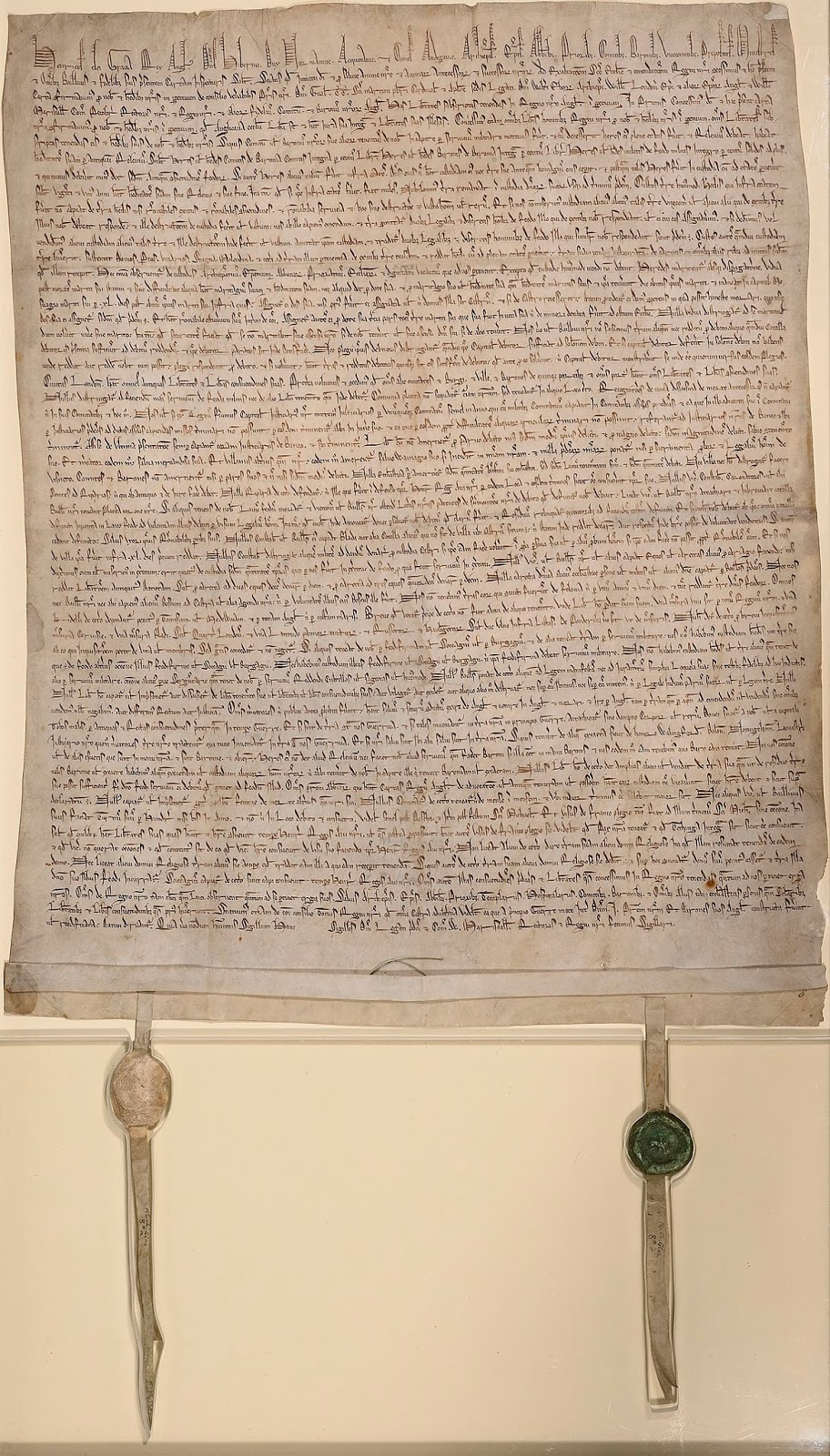 Although the English nobility were protecting their own independence with little thought of anyone else, Magna Carta was a critical turning point. It represents the first step on the road to the Declaration of Independence, the Emancipation Proclamation and other notable events in humanity's struggle for freedom.


Significantly, the Bodleian’s copy of Magna Carta was issued two years after Runnymede. Bearing the seal of the Royal Chancery, the Bodleian Magna Carta is an official confirmation of what King John had been forced to sign under duress. The English barons were justly suspicious of royal duplicity and they forced his successor, Henry III, to reissue the famous document after John I died in 1216. Magna Carta was reissued on a number of occasions until the definitive version was signed by Edward I in 1297 when the first Parliament was convened.


The cause of liberty never sleeps and the Bodleian’s copy of Magna Carta is proof of the need for vigilance.


One of the exhibition wall texts quotes an 1830 article from the Westminster Review, “Genius is the gift of God, in poetry, painting, or music; but the degree to which that genius can develop itself, I maintain, depends on the opportunity given it by patronage, that is, by employment.”


The role of the patron is attested to by lavishly illustrated books such as the magnificent copy of the Qur’an, produced in Persia around 1550. The pages are almost symmetrical in shape - but not quite. Perfection is reserved for God. 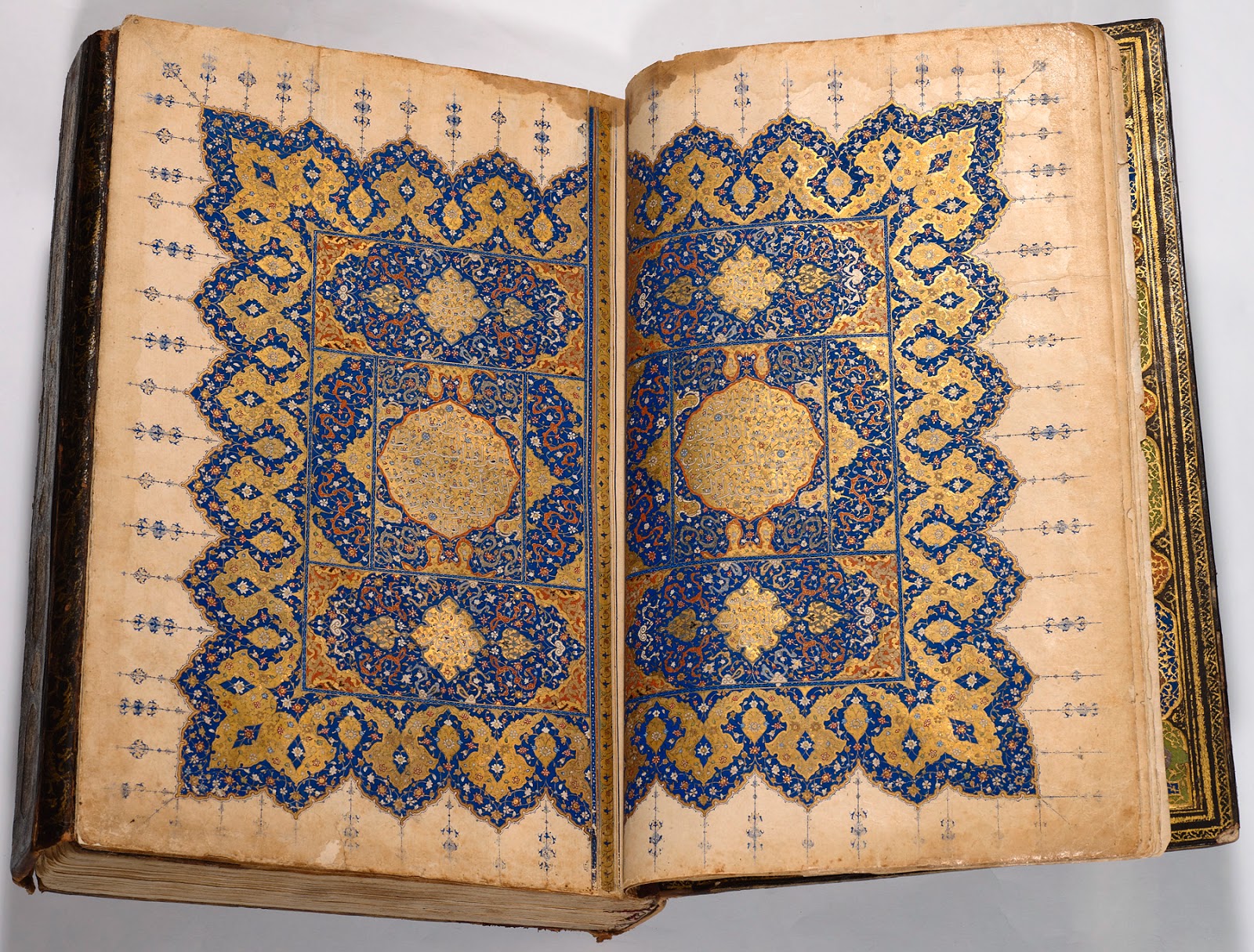 
Perhaps my favorite object in Marks of Genius is the beautiful Japanese picture scroll, or emaki, dating to the early years of the Edo period, the mid-seventeenth century. Following decades of fratricidal civil wars and a disastrous invasion of Korea in the 1590’s, Japan settled into a period of peace and diplomatic isolation. Works of art and literature like this emaki were commissioned to emphasize the traditions of Japan at the expense of ideas from abroad.


In a wondrous display of serendipity, the story told on this emaki, The Tale of Urashima, has a number of themes in common with some of the great stories of Western literature. We can find parallels with the legend of Pandora from Greek mythology, the theme of travelers to a magical realm as in Sir Thomas Moore’s Utopia and the time-bending tale of Rip Van Winkle by Washington Irving.


In this Japanese folktale, a fisherman named Urashima, travels to an enchanted palace, the residence of Princess Otohime. Each of the four sides of the princess’ palace presents a view of a different season of the year – all at the same time!


Here we see the leaves of Japan’s signature maple trees tinged with the red and gold of autumn. When Urashima returns home – after an absence, apparently, of only a few days – he finds that he has been gone for many years. He has not aged a bit, until he opens a box given to him by the princess who had instructed him to keep it closed. Instantly, Urashima is transformed into an elderly man.


This beautiful version of the story of Urashima is a cautionary tale for a society that did not encourage long-distance travel. It also shows the universality of great literature and human genius.


The wonderful treasures on display at the Morgan Library and Museum are preserved at Oxford University's Bodleian Library. But these hallowed manuscripts, pictures and maps cannot be kept in a box. The Bodleian Library is wise to open the lid during travelling exhibitions like this one. Unlike Urashima, these “marks of genius” never grow old.