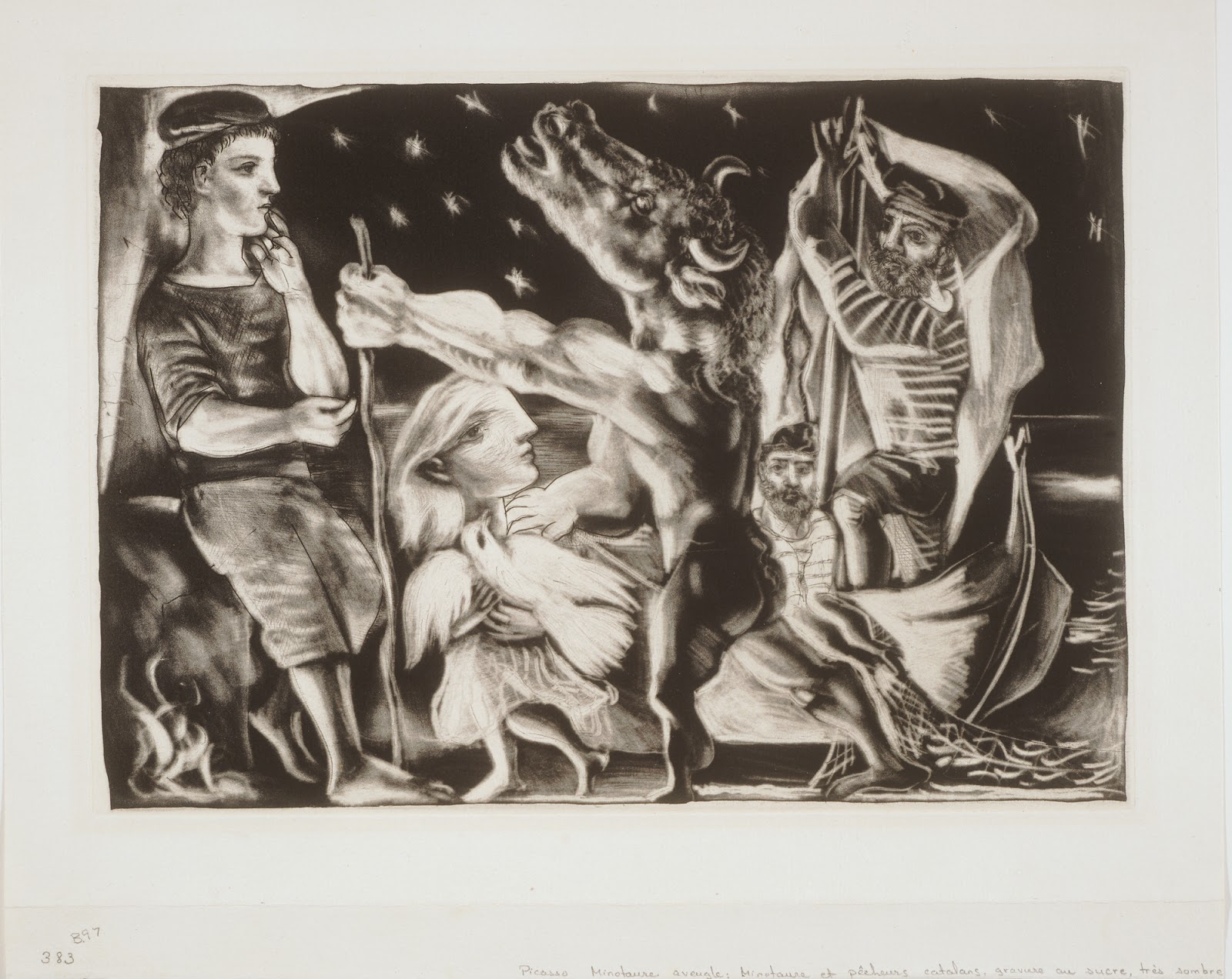 Reviewed by Ed Voves
Great art always speaks for itself. A notable work of art - whatever the medium - is a unique and timeless assertion of each artist's creative insight.


Art exhibitions showcase the individual contributions of artists. Exhibits also show trace common themes and the ways that innovative or over-looked forms of creative expression are utilized by artists to "speak" for art in new ways.


Two thoughtful and eclectic exhibits at the Philadelphia Museum of Art address the process whereby an artistic medium, unappreciated or seldom studied by art scholars, can reveal profound truths and unforgettable imagery. Artificial Light: Flash Photography in the Twentieth Century and Picasso Prints: Myths, Minotaurs and Muses also complement each other by drawing attention to a human value often undervalued today: compassion.


Why compassion? Flash photography often has an opposite effect, of invading someone's life in a sudden assault of paralyzing, probing light. Some of the photos in the exhibit, like Harold Edgerton’s Tumblers (1942), evoke a clinical, dispassionate perspective, namely that of science.  Ovid’s Metamorphosis, which inspired many of Picasso's prints, is not a notably compassionate work.  Pablo Picasso, himself, was more known for his personal passions than concern for those around him.


Yet many of the art works in Artificial Light and Picasso Prints powerfully evoke the need for human empathy.


A photo by Mark Cohen, on display in Artificial Light, is a good starting point. Now based in Philadelphia after many years in Wilkes-Barre, PA, Cohen specializes in what he describes as "intrusive" street-photography. 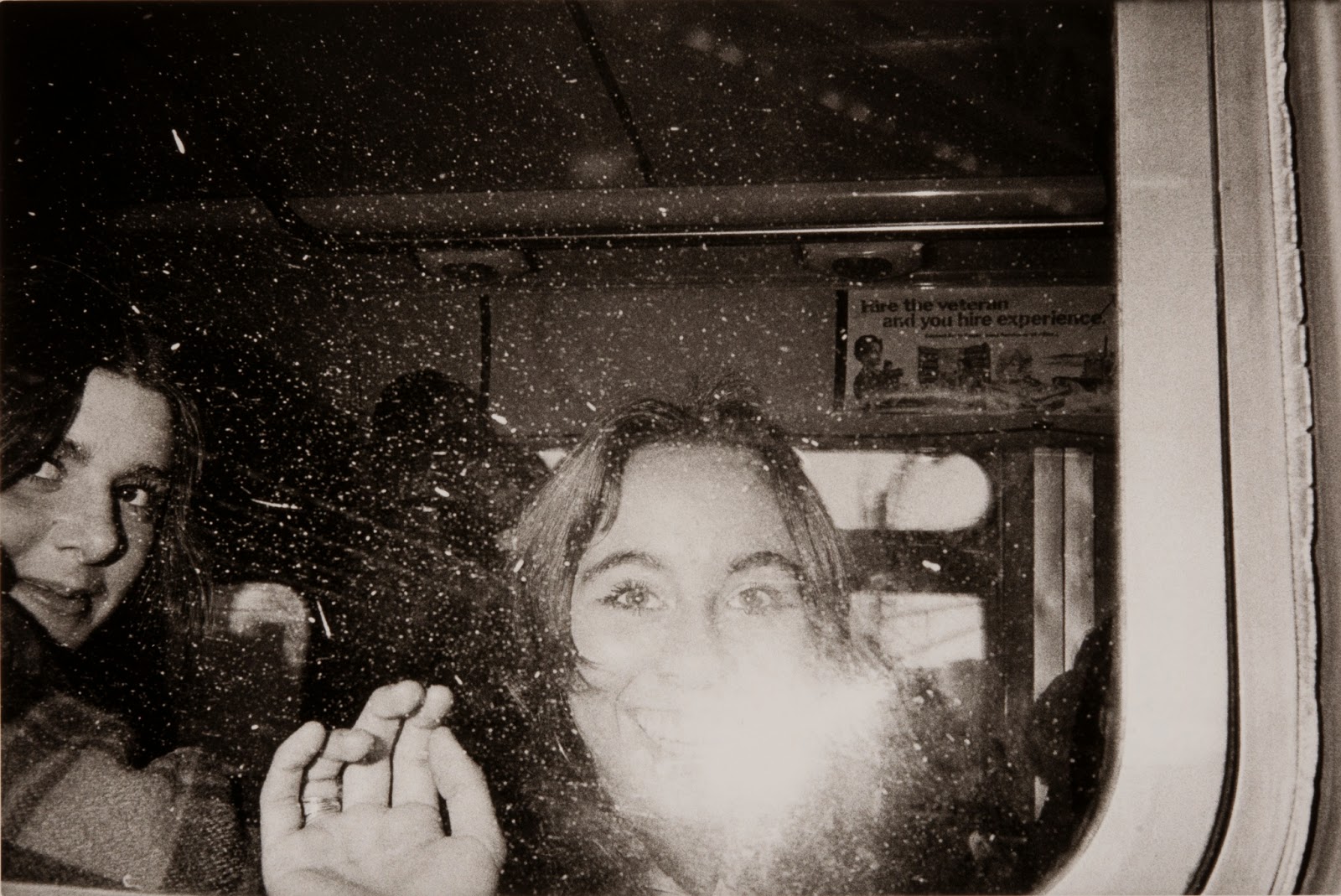 Mark Cohen, Untitled (Girls' Faces Flashed in Bus Window)
In Cohen's 1973 photo, Untitled (Girls' Faces Flashed in Bus Window), we see exactly what the title says - and something more. The reflection of Cohen's flash replicates the effect of human breath on a window, in this case of the smiling, vivacious young woman beaming at us from inside the bus. This effect makes the young woman the active party in the photo. She is the beholder, her breath marking her presence as she reaches out to us, with an open-handed act of friendship.


Of course, this startling detail is just a trick of the camera and the young woman's waved hand little more than a spontaneous gesture. But in that fleeting moment, her eyes meet ours and the artificial barriers between human beings melt away.


Lewis Hine (1874-1940) aimed to bridge the dividing gulf between people too, but his photo process was a bit more deliberate.


Hine, the great Progressive-era photographer, documented the plight of child workers, immigrants and hard-luck outcasts with a large format camera. Hine's night-time photography carried on the work of an earlier social activist, Jacob Riis, one of the first to experiment with flash photography. Hine's Midnight at the Bowery Mission Breadline, 1909, on display in the exhibit, is a superb example of the psychological awareness that he brought to his work.


Hine was a master of giving artful form to awful reality. Many of his famous photos of immigrant mothers and children directly borrowed poses from Raphael's Renaissance Madonnas. When he photographed a young, barefoot factory girl from Vermont, Addie Card, in front of the cotton-spinning loom of the North Pownal Cotton Mill, Hine was surely aware of the country lasses painted over a century earlier by Thomas Gainsborough.


With aesthetically acceptable photos like these, Hine was able to deliver a shocking glimpse of the harshness of life in a format that would not cause the viewer to immediately wince and look away. In his nighttime pictures, however, Hine had to use the flash to illuminate the scene, a dangerous and unforgiving technique at that time. Hine ignited magnesium powder to light the scene. This gave little or no opportunity to arrange the subjects to conform to preconceived notions of fine art. The flash photo would have to stand or fall on whether it caught and held this specific moment of time. 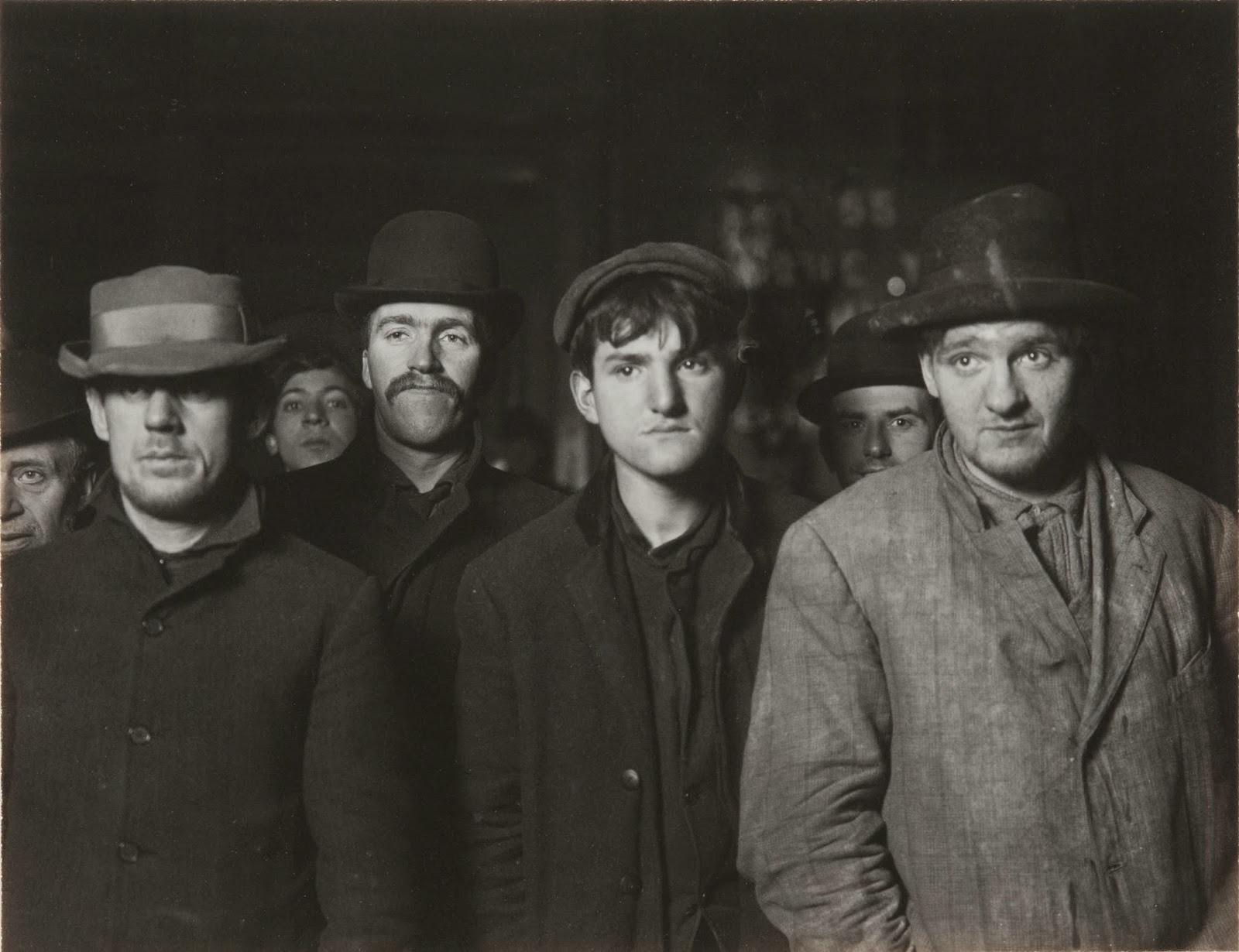 Lewis W. Hine, Midnight at the Bowery Mission Breadline
Midnight at the Bowery Mission Breadline certainly succeeded in capturing the raw, social-Darwinian brutalities of pre-World War I America. This group portrait is all the more powerful for the wide range of ages of the picture's subjects, with a touch of intriguing mystery. Who are these men trying to hold hunger at bay with a free cup of coffee and a slice of bread? Hobos? Laid-off factory workers? Immigrants just arrived from Ellis Island?


Hine's Breadline protagonists have the defeated faces of wartime POWs. Their varying expressions recall Winslow Homer's Prisoners from the Front. But these hungry men are not defeated "enemy" soldiers. They are fellow-Americans. They stare at us through the lens of Hine's camera. And since their clothes are so non-descript, so lacking in period details - except for the rounded derby hat of the second man from the left - these men might well be from the "brother can you spare a dime" 1930's or from our own time. They could be us, just as the beaming, smiling Girls' Faces Flashed in a Bus Window could be ours too, on a better, happier day.


These two pictures are indicative of the way that flash photos help us to reach beyond the "us vs. them" divide that separates human beings. We can embrace the "other" in other people more readily because of the enhanced spontaneity of the photograph taken with a flash camera. And in doing so, we can get in touch with the "other" in ourselves.


Nicholas Nixon's West Springfield, Massachusetts extends this embrace to other species, indeed to all of nature. Nixon is one of the most sensitive photographers of the contemporary era. His photos of AIDS patients and dying elderly people are haunting portraits, entirely free of cloying sentimentality.


Here, an affectionate hand is extended to a sleeping calf. Nixon captured an endearing image of innocent new life - and of human empathy. The calf, however, is not pet, not a puppy or kitten who will be showered with affection and treats. The calf, when it matures, is fated to serve the material needs of people, producing milk or meat for the dinner table. It is unsettling to look at this photo, taken in 1978, and reflect that this beautiful animal is long since dead, unremembered but for this memorable image. 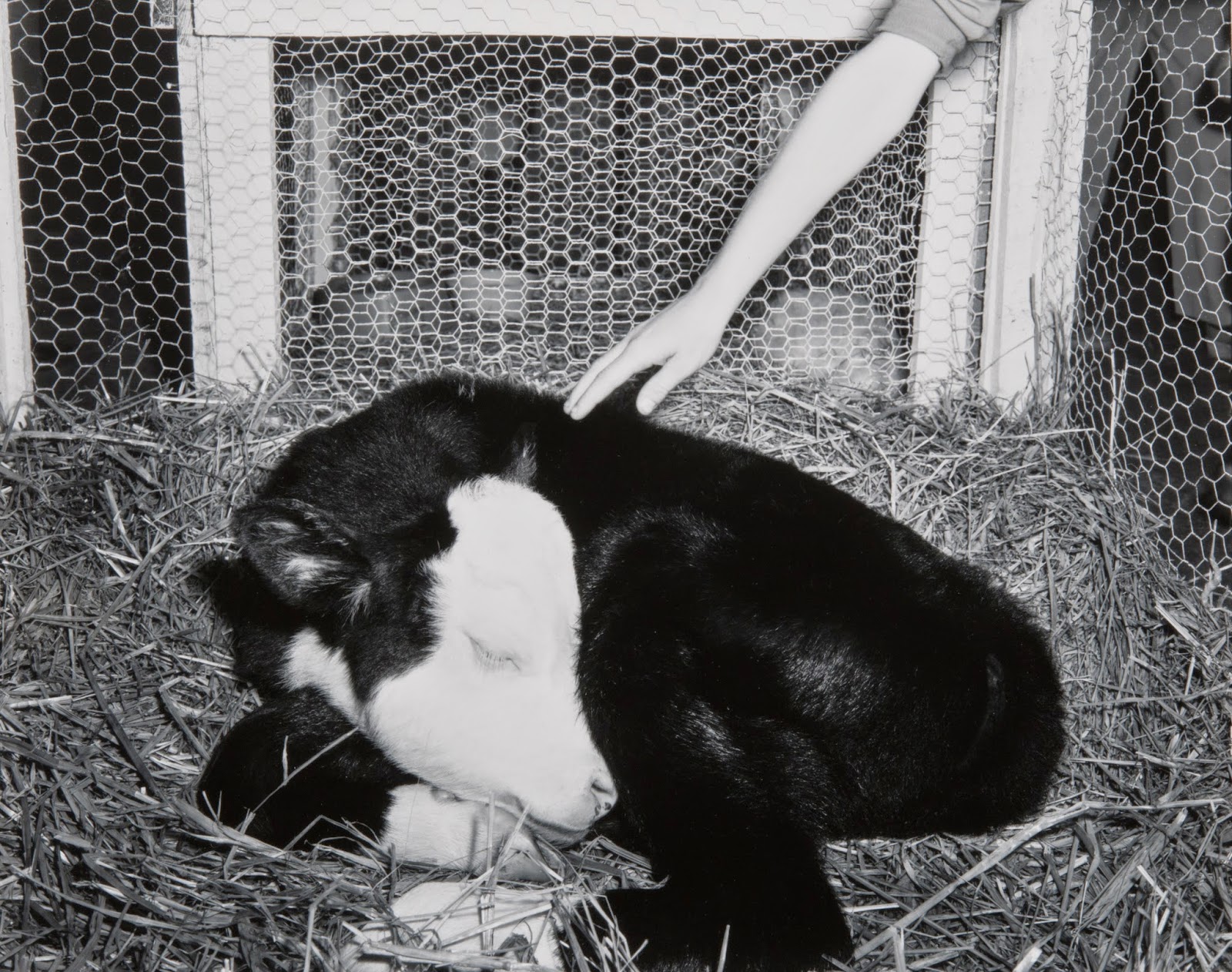 Nicholas Nixon, West Springfield, Massachusetts
mages of cattle are comparatively rare in art, but in the ancient Mediterranean world religious cults flourished where bulls were worshipped or ritually slaughtered. We see echoes of these practices in the second of the Philadelphia Museum of Art exhibits, Picasso Prints: Myths, Minotaurs and Muses.


Pablo Picasso (1881-1973), who created mythology-themed prints during the first half of the 1930's, focused on the legend of the Minotaur. This became a dominant motif in Picasso's art, partly in response to his own tumultuous life, but also expressing his anguish over the Spanish Civil War which began in 1936.


Picasso's creative genius was so caught-up in the revolutionary atmosphere of pre-World War I Paris that his imagination remained little affected by ancient art until a 1917 visit to Italy. The "return to order" urged by Jean Cocteau a year later further directed him toward classical antiquity. When the great art dealer, Ambrose Vollard, commissioned Picasso to illustrate the mythological stories in Ovid’s Metamorphoses, it appeared to be a perfect match of artist and subject.


A different destiny awaited the Vollard Suite and the great etching and engraving, Minotauromachy, created in 1935. These classically-inspired works mirror Picasso's bitter disputes at that time with his wife, Olga Khokhlova and his young mistress and model, Marie-Thérèse Walter. The violence in many of these prints also reflects the savage Spanish Civil War, which began in 1936.


Marie-Thérèse Walter, idolized by Picasso for her classical beauty, appears in most of these prints. We see her Grecian profile as she gazes down at Picasso's alter ego, the Minotaur. Picasso identified with this bull-headed "monster" and later, toward the end of his life, he declared, "If all the ways I have been along were marked on a map and joined up with a line, it might represent a Minotaur." 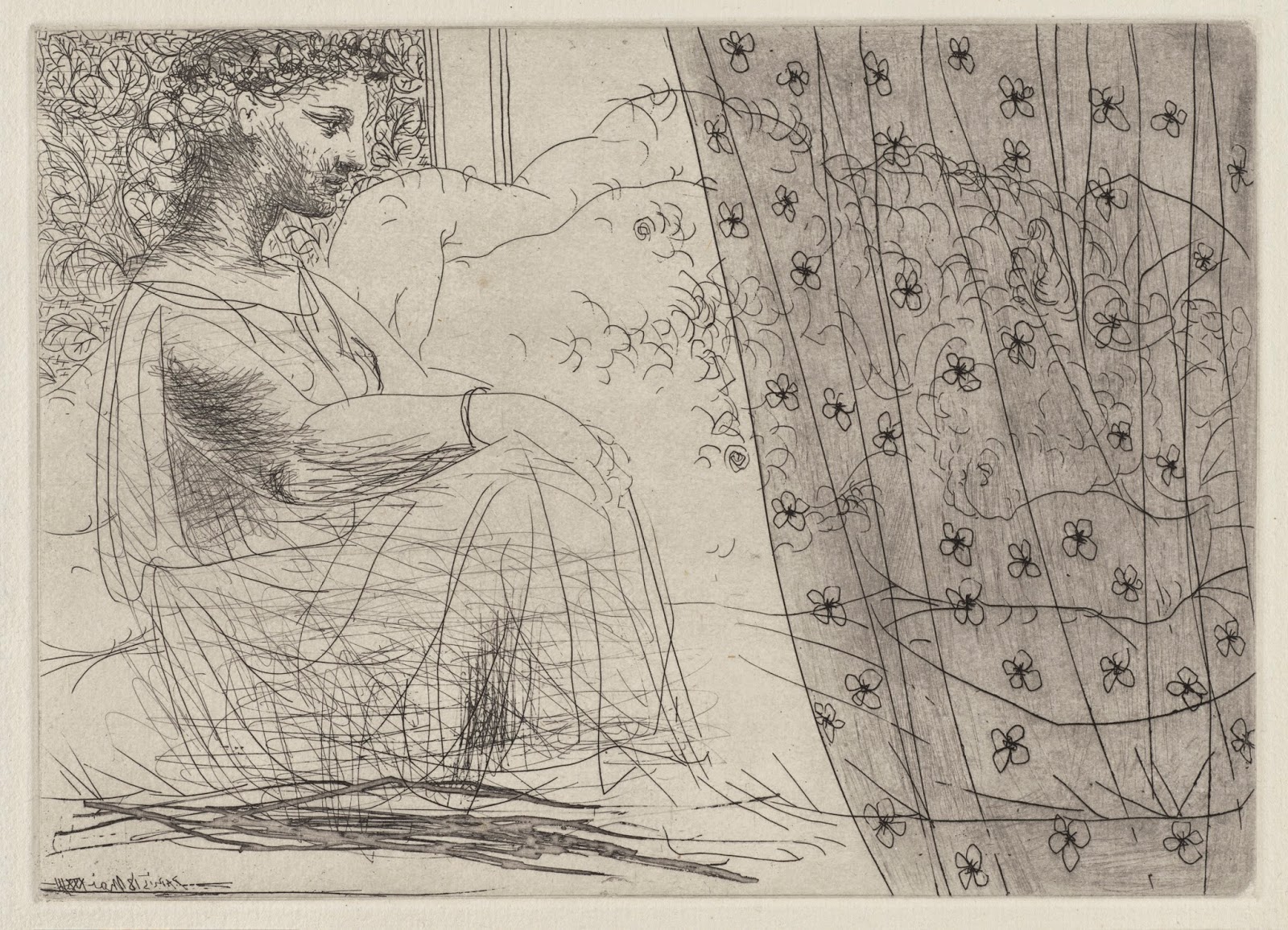 
A year later, Picasso shows a young girl with the facial features of Marie-Thérèse guiding a blinded, suffering Minotaur.  The print is filled with dense, cryptic images, the tortured Minotaur reflecting his own inner turmoil.


These images climax with the 1935 print, Minotauromachy or "Minotaur fight." All of the elements here relate to Picasso's explosive conflict with his wife and Marie-Thérèse.  Olga Khokhlova discovered the relationship between Picasso and Marie-Thérèse, who was pregnant with his child. Picasso's handling of the situation was notably insensitive to both wife and mistress and a short time later he commenced a new liaison, with Dora Marr. 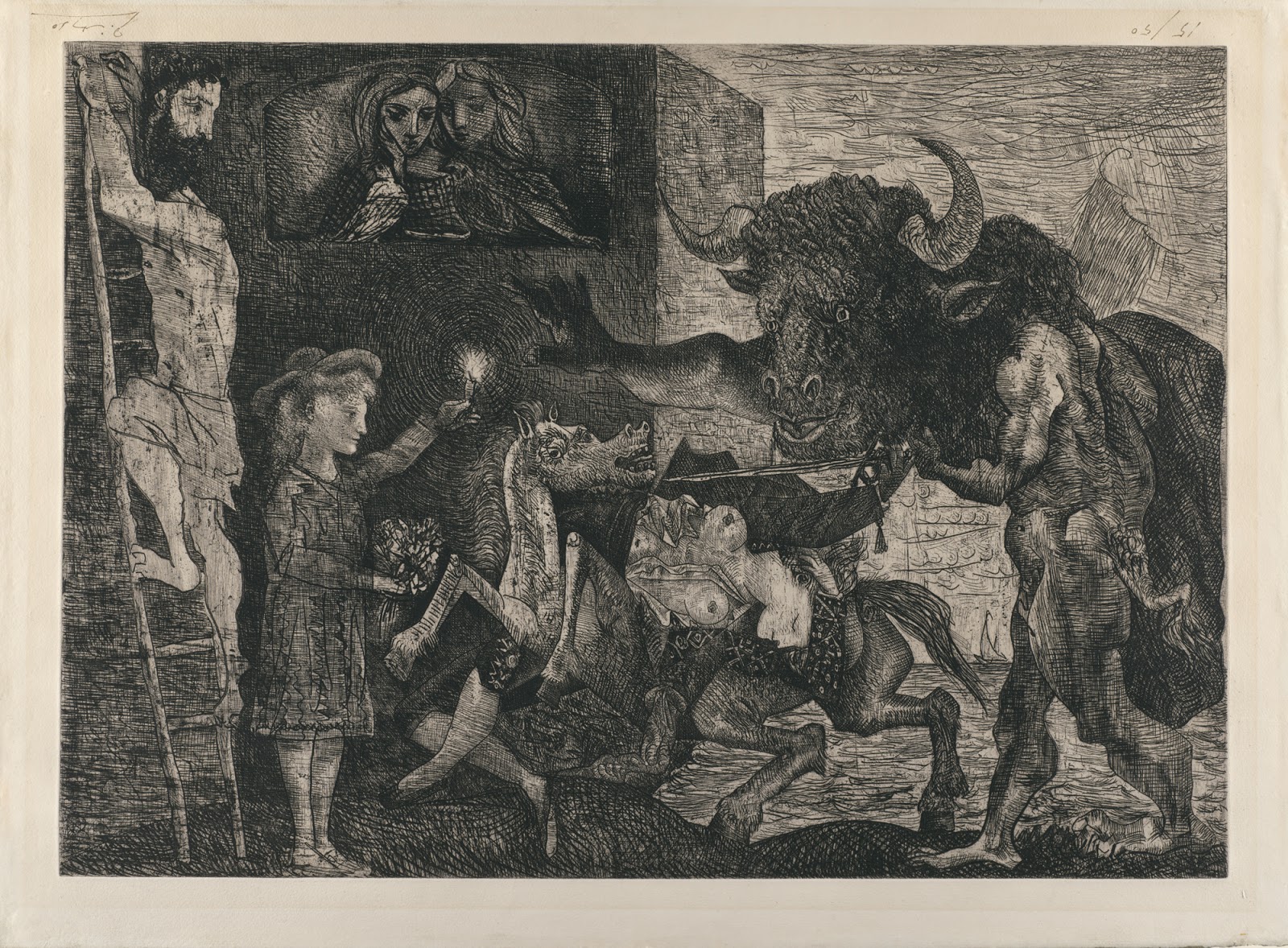 Pablo Picasso,  Minotauromachy
The elements of Minotauromachy, however, shortly reappeared in another work that would yield a great deal of credit to Picasso. The face of Marie-Thérèse with outstretched hand holding a light, the anguished rearing horse, the great bull's head, the crumpled, dying figure holding a sword - all would emerge again in Guernica!

Minotauromachy and the prints of the Vollard Suite, by the strange alchemy that is art, paved the way to Picasso's greatest painting. It is a process that we can see at work in the flash photos and classically inspired prints of these fine exhibits at the Philadelphia Museum of Art: the dross of daily life transformed into the gold of compassionate creativity.


Images Courtesy of the Philadelphia Museum of Art