Art Eyewitness Essay: Mother of Inspiration - Icons of the Virgin Mary and the Rise of Western Art 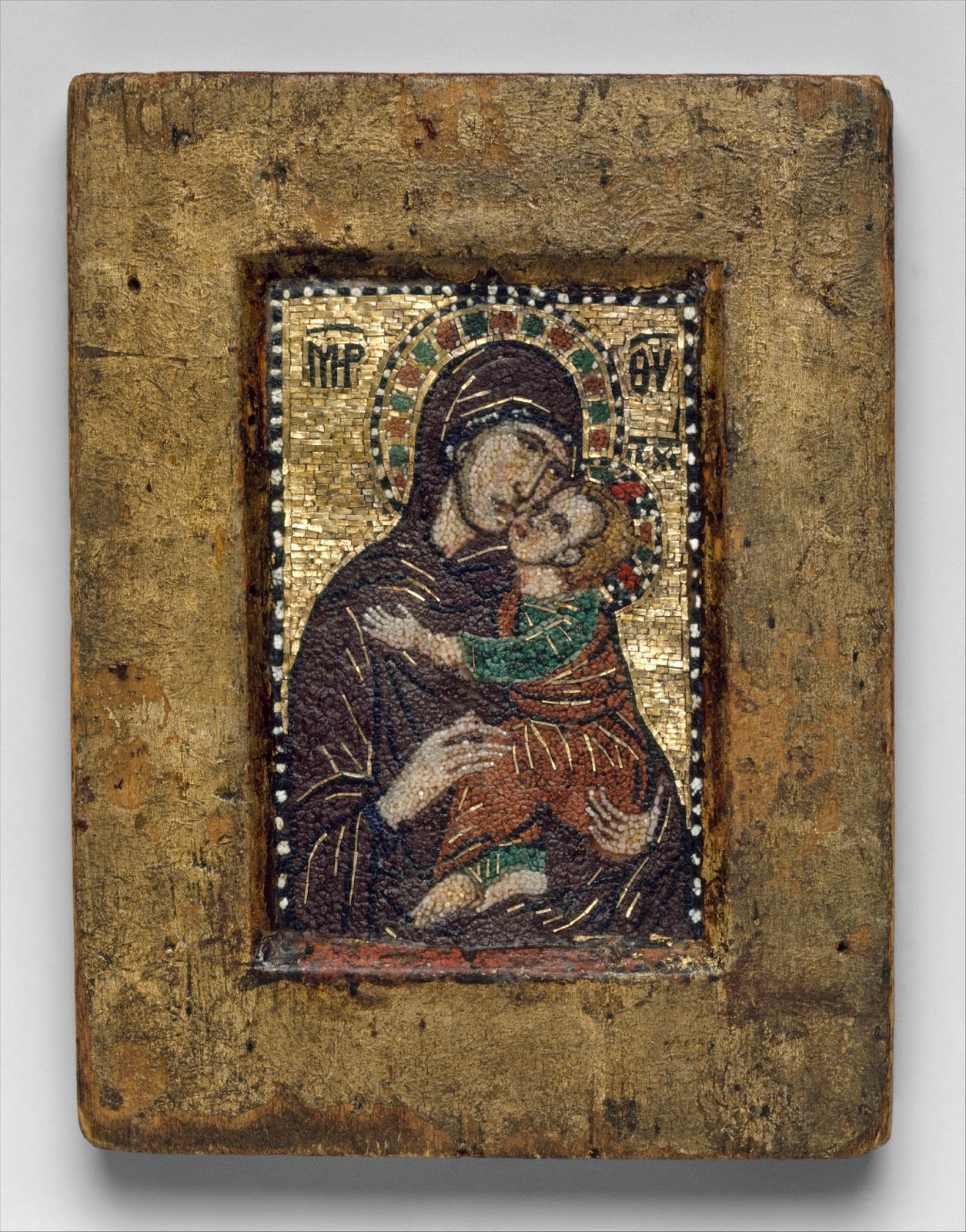 Icons of the Virgin Mary and the Rise of Western Art

Inspiration often comes in the unlikeliest of places.

I was recently moved to reflect on the importance of paintings of Mary, the mother of Jesus, by the massed displays of Mother's Day cards at the local supermarket. The flowery designs of these cards hardly rank comparison with Giotto and Raphael. Yet modern ideals of motherhood, like Renaissance Madonnas, trace their origin to a common source, to the ancient images or icons of Mary.


Icons are one of the most profoundly moving art forms of all time. These religious images remain a hallowed feature of the Orthodox Christian churches and are associated historically with the Eastern Roman Empire or Byzantium during the Middle Ages.


Icons devoted to the Virgin Mary, especially in the form known as the Theotokos Hodegetria, were based on the tradition that St. Luke had painted a portrait of the mother of Jesus during her lifetime. St. Luke was also the author of the gospel that contains the Nativity narrative in which Mary so prominently features.


The Walters Museum in Baltimore, one of the finest privately endowed art museums in world, has a rare, ivory triptych showing the Theotokos Hodegetria. Dated to the ninth century, this icon was once painted and is thought to have been modeled on the reputed painting by St. Luke. During the ninth century, this venerated work of art was housed in a monastery in Constantinople, capital of the Byzantine Empire. The original painting has disappeared, leaving the Walters Museum ivory icon as a link with the ancient past. 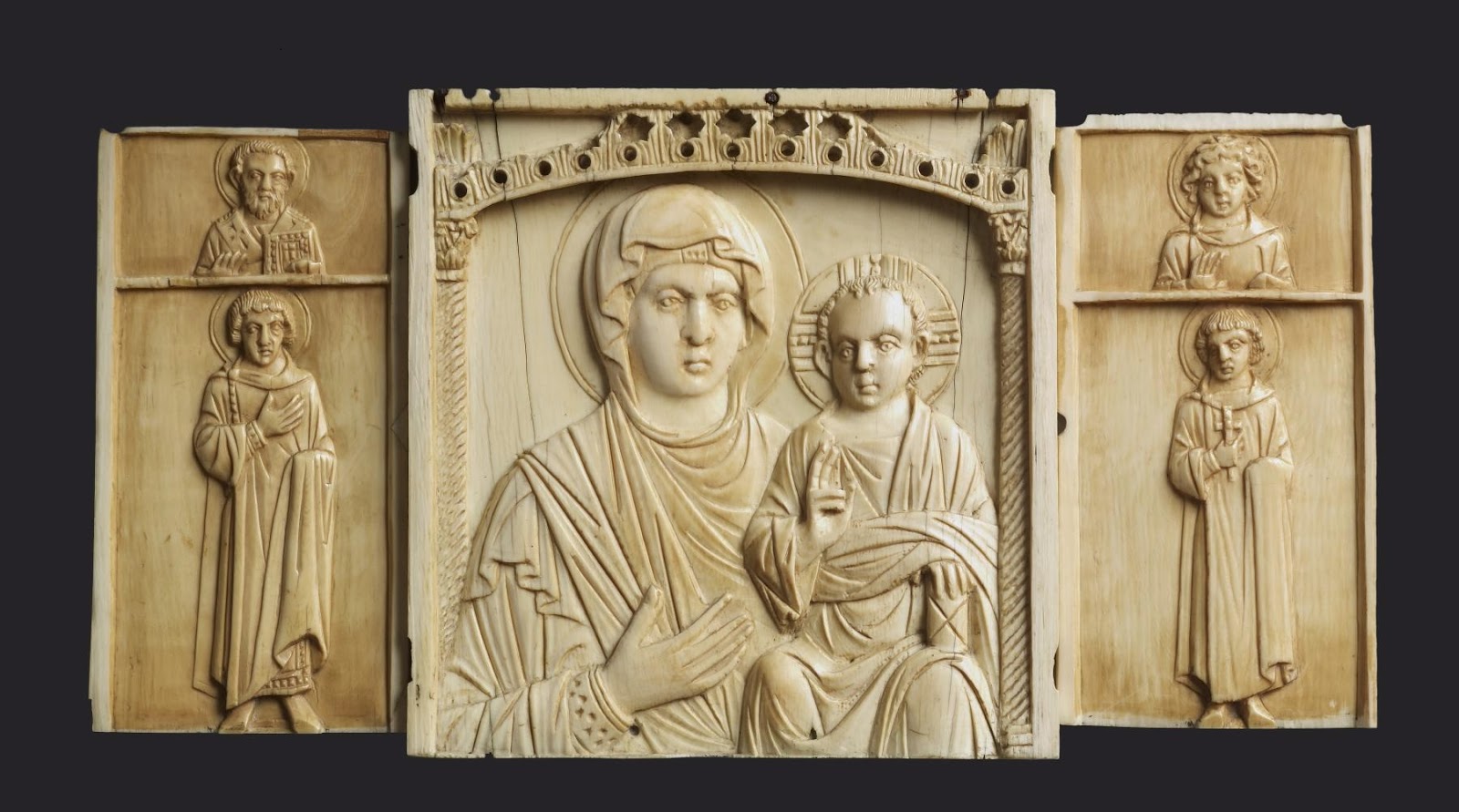 Triptych Icon of the Virgin and Child with Saints, (tenth century)

The Byzantine icon, then, is a living legacy of early Christianity. Among other themes, icons established a convention for visualizing and honoring motherhood, female spirituality and the sufferings endured by women in times of war and persecution.


This essay will certainly have more to say on the icons of Mary from Byzantium. However, the greatest icon and image of motherhood that I have ever seen was not created in Constantinople. It is Arshile Gorky's The Artist and his Mother.


The Artist and his Mother was painted sometime between the late 1920's and 1936. Gorky's heart-searing work exists in two forms, the somber double portrait, executed in gray, brown and ochre, now in the collection of the Whitney Museum in New York, and a more lightly-hued version in the National Gallery in Washington, D.C.


Both paintings are based on a 1912 photograph of Shushaniq Adoian and her son, Vosdanik, before they fled from Armenia to escape the Turks. The photograph survived their perilous escape attempt in 1915. Vosdanik made it to safety, later changing his name in honor of Maxim Gorky, the Russian writer who championed the cause of the Armenian people.


Shushaniq Adoian died from starvation so that her son could live. She expired in her son's arms.


An estimated one million other "starving Armenians" perished in the Turkish genocide that is obscured by the widespread suffering of World War I and the 1918 Influenza pandemic. The Turkish government still denies it ever happened. If the near extermination of the Armenians is recalled at all, it is because of the derisive remark made by Adolf Hitler, as he planned the Final Solution, "Who now remembers the Armenians?" 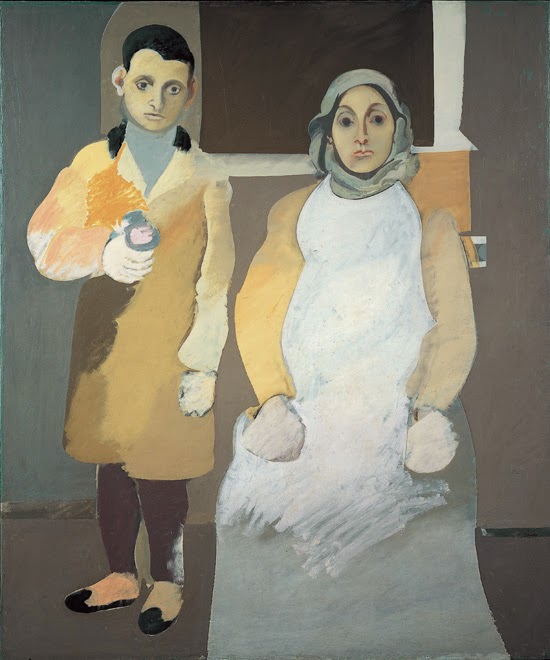 
“I shall resurrect Armenia with my brush,” Gorky declared in 1944, almost as a direct rejoinder to Hitler, “for all the world to see.”


Mary's eyes and hands are key elements of icons. A beautiful example appears in the Heaven and Earth, Art of Byzantium from Greek Collections exhibit, which premiered at the National Gallery in Washington and is now at the Getty Museum. The Processional icon of the Virgin Hodegetria, dating to the last years of the twelfth century, was held aloft for the faithful to behold. 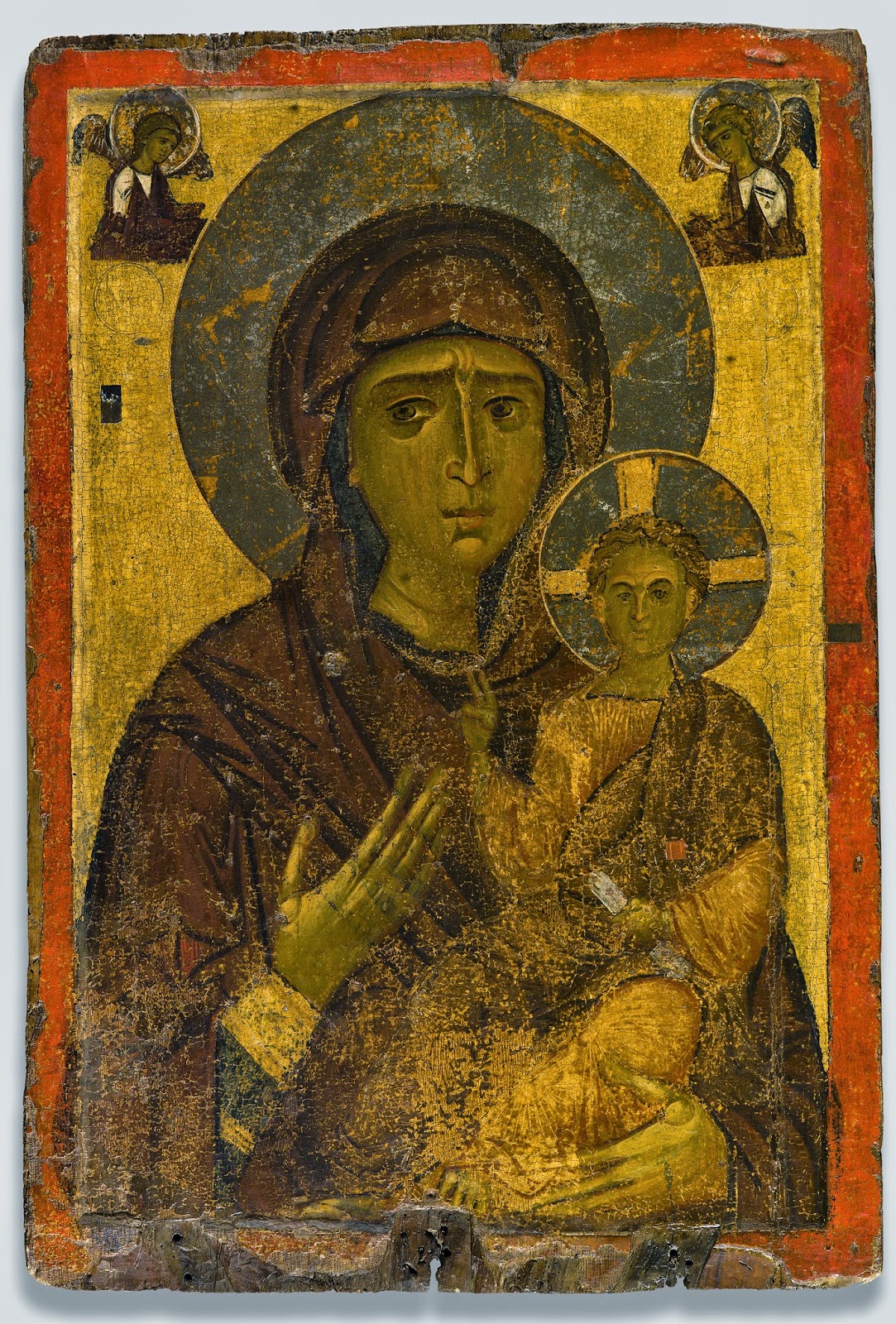 
The great theologian, Henri Nouwen, evoked the spiritual forces at work in such icons. In his moving book, Behold the Beauty of the Lord, Nouwen wrote:
The Virgin's eyes are not curious, investigating or even understanding, but eyes which reveal to us our true selves. Likewise her hands are not grasping, demanding, or directing, but hands which open a space for us to approach Jesus without fear.

In Gorky's paintings, his mother's eyes are fully-dilated, deep pools of inscrutable energy. She is peering at us or through us with laser-like intensity. The hands of Gorky's mother are unformed or unfinished. Her hands look like they were wrapped in bandages covering wounds from torture or frost bite.

If you look closely at Gorky's mother, the realization slowly dawns that her body - hands and shoulder first - is being erased. Even as the "black holes" of her eyes seize control of us, she is fading from our view. We will remain bound to the presence of her son, however, by the effect of her fixating gaze.


Gorky was an artist in the Western tradition, one of the great Abstract painters of the twentieth century. In keeping his mother's eyes directly upon the viewer of The Artist and his Mother, Gorky ignored Western conventions of painting the Virgin Mary that stretched back to Giotto in the fourteenth century.


Theology in Western Europe during the Middle Ages accepted that Jesus was "fully human, fully divine." This was true in the Orthodox provinces of the Byzantine Empire, as well.


For much of that period, Western artists conformed to the Byzantine icon style. The Metropolitan Museum of Art in New York has works by a thirteenth century painter from Florence whose name remains a mystery. The Master of the Magdalen painted some of his works entirely in the Byzantine style. But a fragment of a painting by this anonymous artist around 1280 reveals a remarkable change. Here, a startling sense of the personality of the Virgin Mary is depicted, very much at odds with the otherworldly demeanor of the Theotokos Hodegetria icons. 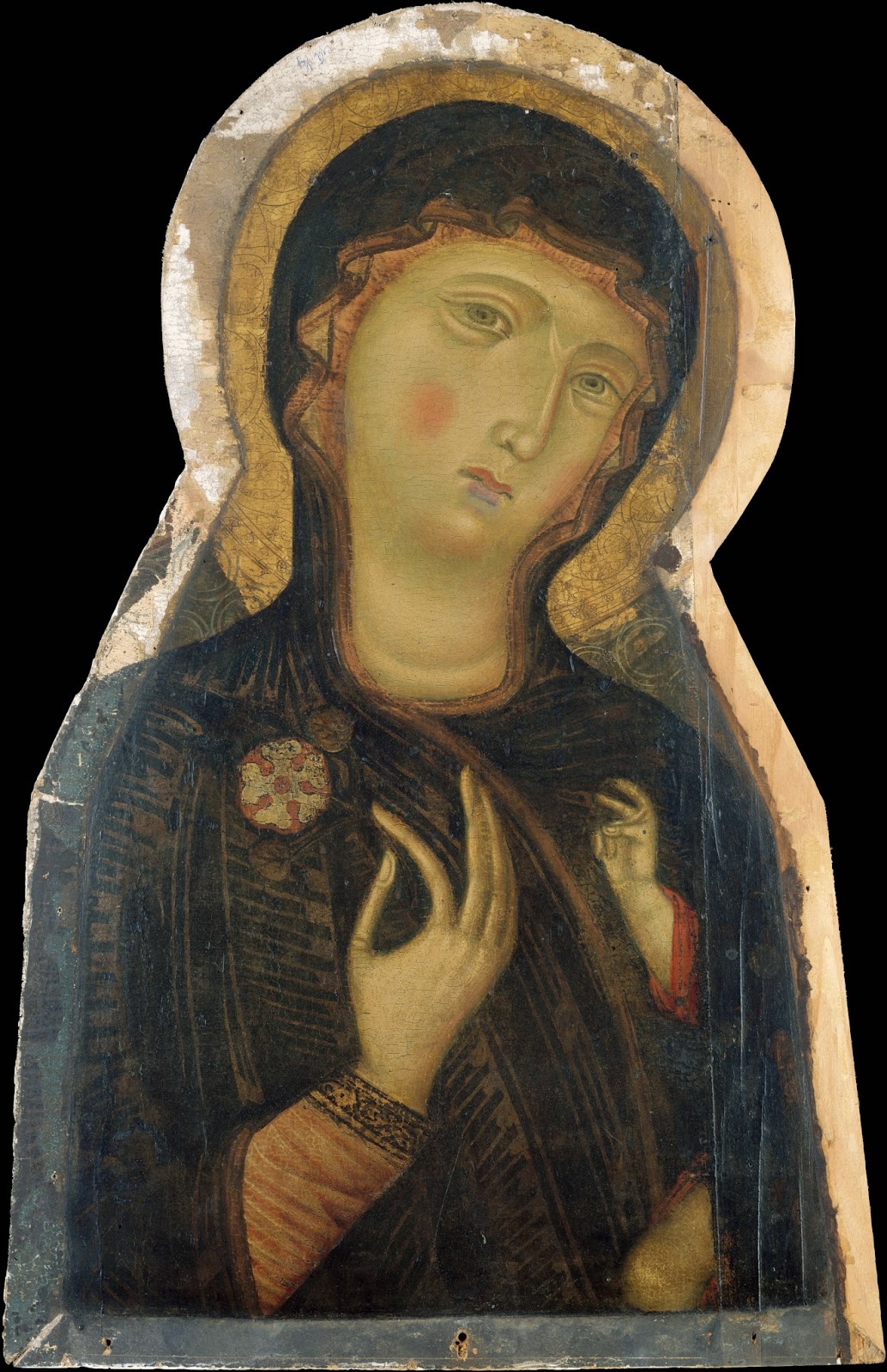 Master of the Magdalen, Madonna and Child, ca. 1280

As the fourteenth century dawned, it was this new sense of the humanity of Jesus, the Virgin Mary and Christian saints that emerged as the dominant theme of the increasingly influential Florentine school of art. You can see this in the unforgettable Madonna and Child, painted by Giotto during the decade of the 1320's. Look at the way that the infant Jesus clasps the finger of Mary's hand, which lovingly supports her baby son. This small touch is little short of a revolution in art. 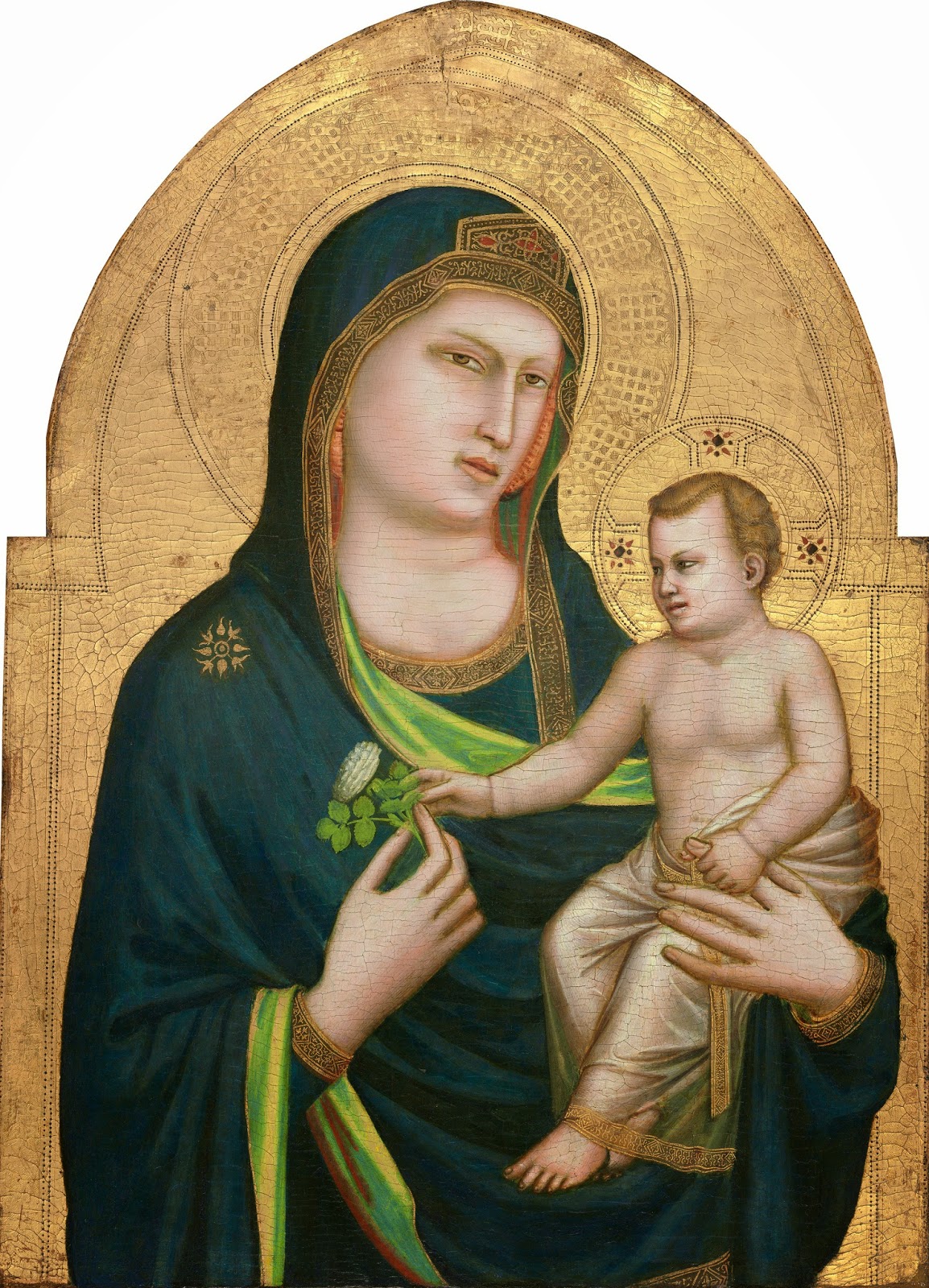 
Giotto’s Madonna and Child was in keeping with the Byzantine icon type known as the Panagia Eleousa. The Eleousa style emphasizes the motherly warmth of Mary. But despite superficial resemblances, Giotto's painting is acting on a very different emotional level. Giotto's Virgin Mary is an earthly, rather than a spiritual, being.


This naturalism in turn was promoted to the rest of Western Europe, initially for religious works of art. By the 1500’s, greater attention and resources were being devoted to paintings with secular themes. In portraits of aristocratic women and their children, the stress on the humanity of the Virgin Mary and the infant Jesus in earlier works of devotion can clearly be traced. 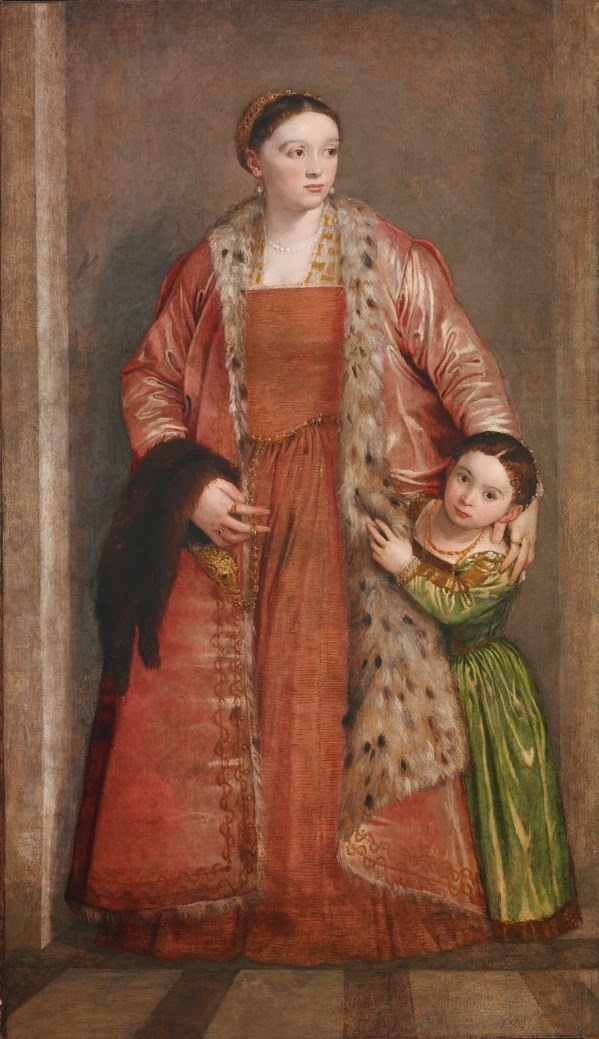 Portrait of Countess Livia da Porto and her Daughter Deidamia by Veronese exemplifies this evolution in the depiction of women in European art. Veronese was a Venetian artist, where Byzantine conventions had earlier held a commanding position. So the triumph of Florentine-style naturalism is notably significant here.


In Veronese's painting, we can see the transformation of spiritual strength and motherly traits of the Virgin Mary in both Byzantine icons and earlier Madonnas from the Italian city-states. Countess Livia is now the focus of attention. The spritely little daughter draped around her arm testifies to her earthly station as noblewoman and mother. A matching portrait of her husband Count Issepo da Porto and their son Leonida would have also established Countess Livia’s role as wife. 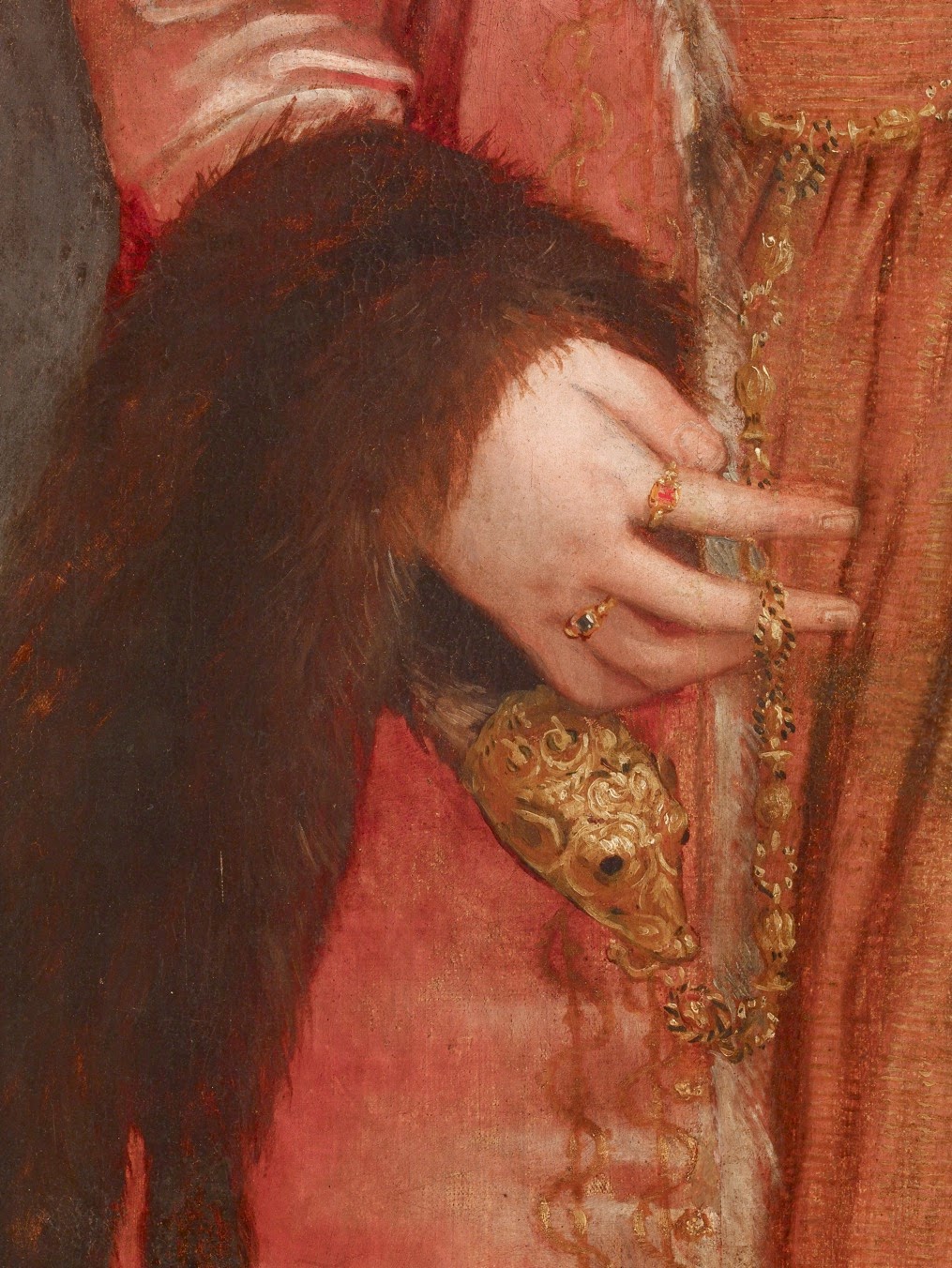 An interesting feature of this impressive portrait is the marten pelt draped over the arm of Countess Livia. The fur of the marten was believed to confer protection on pregnant women. Countess Livia was indeed expecting another child in 1552. 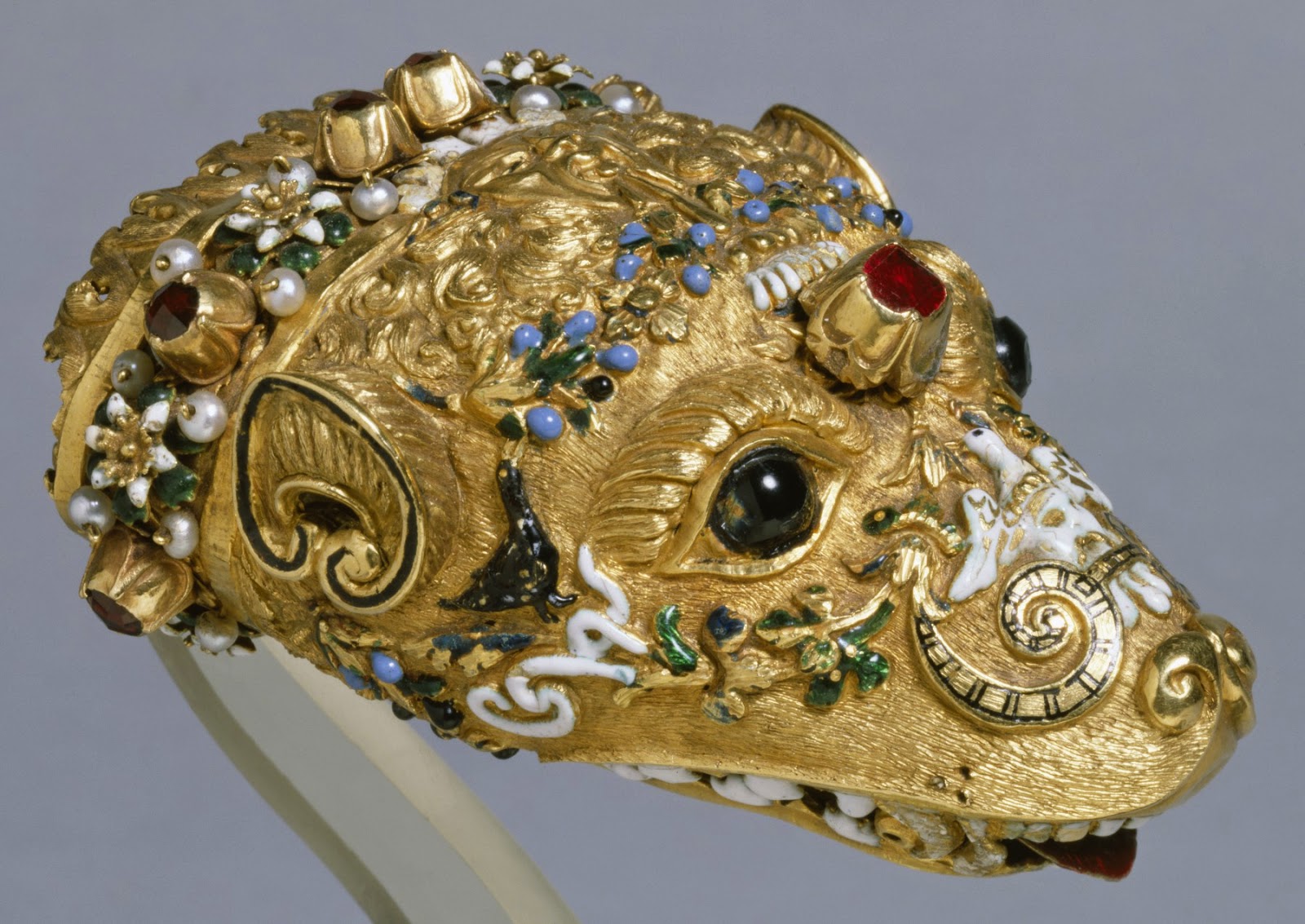 Marten’s Head, (ca. 1550-1559
The head of the marten was encased in a golden, jeweled mask, making it into a Renaissance-era rabbit’s foot. By a delightful stroke of collecting luck, the Walters Museum was able to acquire an almost exact duplicate of this curious treasure.

Countess Livia da Porto was no doubt a very devout Christian woman. Likewise, Christianity and folk wisdom maintained a long partnership over the centuries. Yet, the presence of the jeweled martin's head and the lack of any overt Christian symbols in this painting highlight the diminished role of religion in art by the closing decades of the Renaissance.


The status of women in world society has undergone many transformations since Veronese painted Countess Livia. The countess lived in an age of high mortality of infants and mothers, an age of religious wars and rumors of wars. The jeweled marten’s head is a symbol of a time we would not want to see repeated.


Is that also true of icons of Mary in Byzantium and Madonnas from Italy? The “cult” of the Virgin during the Middle Ages and the Renaissance represents an extreme idealization of womanhood at the expense of actual equality for women in Christendom. Thus, icons to a certain extent were products of repressive, patriarchal societies.


Never-the-less, Arshile Gorky’s The Artist and His Mother shows that the Theotokos Hodegetria is still a profoundly moving symbol of female courage and devotion.


The icons of the Virgin Mary and the evolving depictions of the mother of Jesus throughout the Middle Ages and early Renaissance represents a major advance for women in Western society. In pointing the way to Christ as savior, the Theotokos Hodegetria showed that the care of the human soul was a not a matter to be left – exclusively – in the hands of the “Fathers of the Church.”
***
Text: Copyright of Ed Voves, all rights reserved


Images Courtesy of the National Gallery of Art, Washington D.C. (for the image the Processional icon of the Virgin Hodegetria, which appeared in the Heaven and Earth, Art of Byzantium from Greek Collections exhibit), the Metropolitan Museum of Art, New York, and the Walters Art Museum, Baltimore MD.


Use of the image The Artist and His Mother by Arshile Gorky was granted by the Artists Rights Society (ARS), New York, exclusively for this essay and may not be reused.