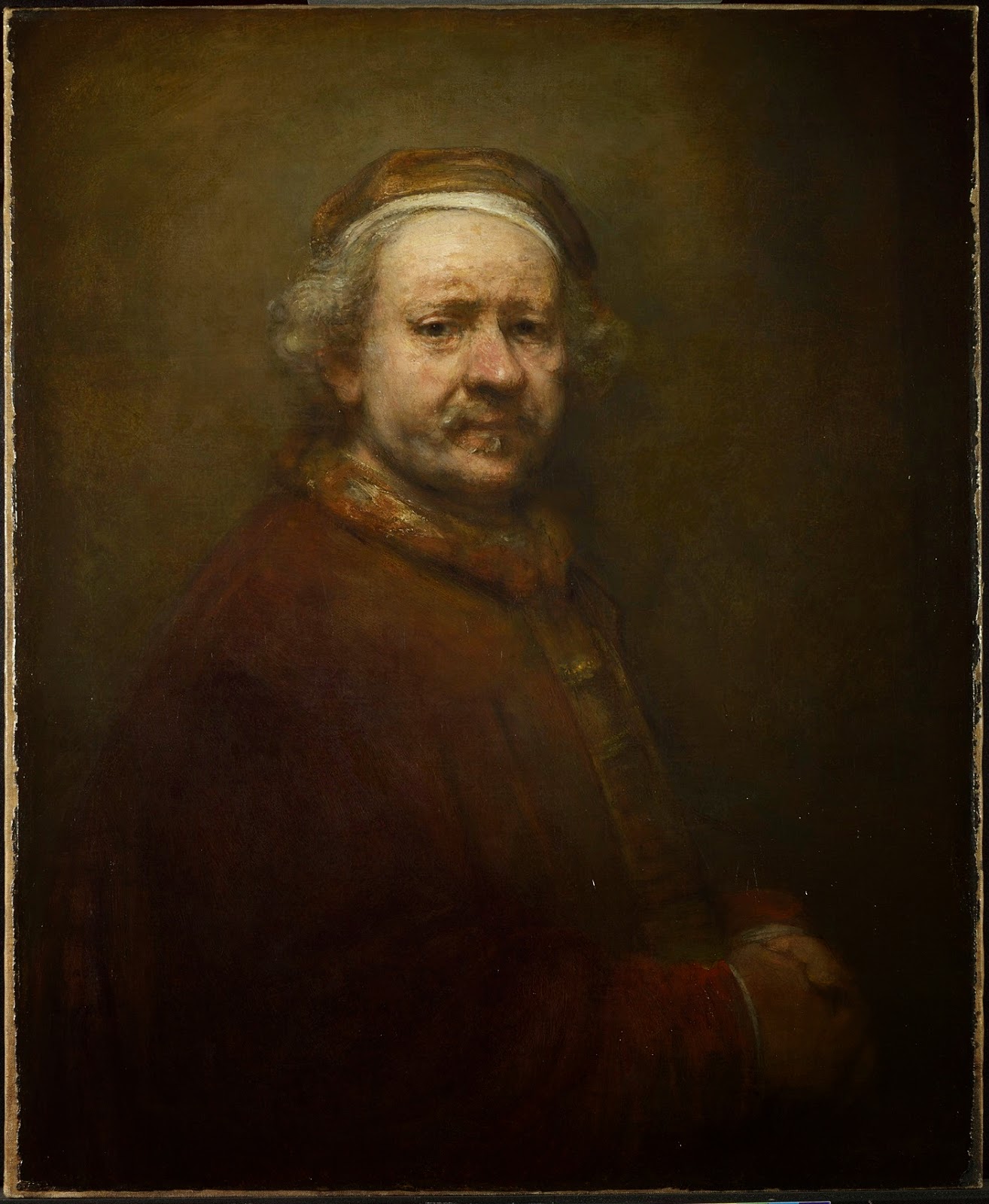 It is thanks to Anton Kerssemakers, a Dutch art enthusiast and friend of Vincent van Gogh, that we have the record of one of the most amazing spiritual encounters between a living artist and a long deceased "old master."

Kerssemakers accompanied van Gogh to the newly opened Rijksmuseum in Amsterdam in 1885. Van Gogh was transfixed by one painting in particular. He stayed rooted before it while Kerssemakers roamed the galleries admiring other works from the Golden Age of the Netherlands. After a while, Kerssemakers returned and there was van Gogh still standing in meditative communion with this iconic work of art.

The painting was Rembrandt's ‘The Jewish Bride’. Painted about 1665, four years before Rembrandt's death, this is indeed a painting to stop art lovers in their tracks.

'The Jewish Bride’ is now on display in London's National Gallery as part of a special exhibit, Rembrandt: the Late Works. I had the great pleasure of seeing this inspiring exhibition in the company of my wife, Anne. Works from Rembrandt's last years - beset by financial reverses and the tragic deaths of deeply-loved family members - reveal how the Dutch artist responded to cruel adversity by creating some of the greatest works of art of all time.

Of the host of magnificent paintings on view in the National Gallery, ‘The Jewish Bride’ is definitely the "show-stopper."  The crowds of art lovers respond to its magnetic appeal much as van Gogh did. Standing before ‘The Jewish Bride’ is a powerful experience. You feel that you have finally met and befriended people that you have known before. Once you are in the presence of this beautiful work, it is hard to tear yourself away. 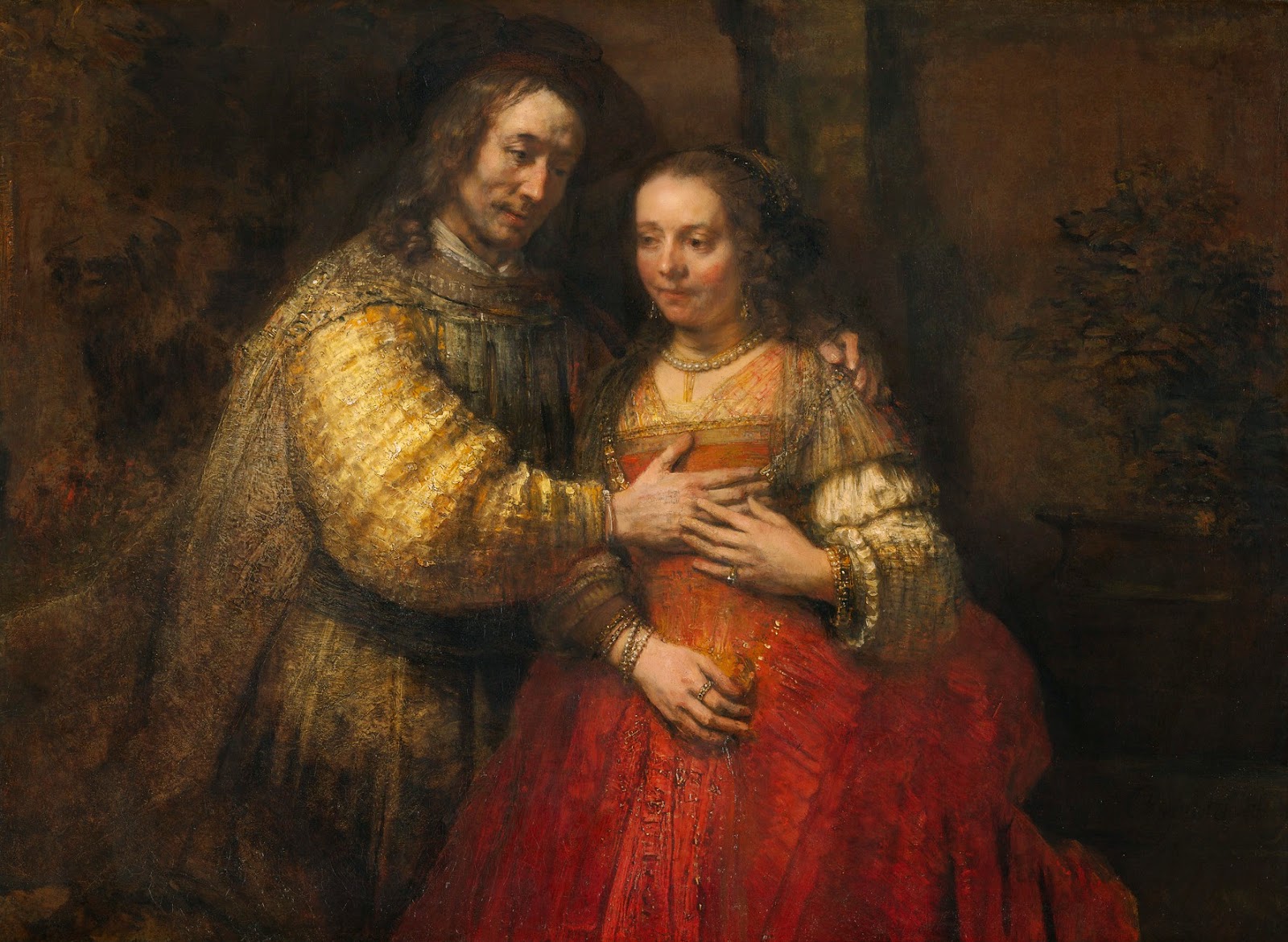 It was the first time that I had ever seen the actual ‘The Jewish Bride’, which is formally entitled Portrait of a Couple as Isaac and Rebecca, known as ‘The Jewish Bride.'  Copies of this work, even the most skillful color reproductions, simply cannot do anything but approximate the way that the crimson and gold of the couple's robes illuminate their dusky surroundings.

Whether you call it 'The Jewish Bride’ or Isaac and Rebecca, there is no absolute certainty that this work was painted with either a Jewish theme or a specific Old Testament story in mind. Rembrandt was certainly sympathetic to Jews, in keeping with the religious toleration of the Dutch Republic. Throughout his life, Rembrandt painted biblical figures with Jewish features, including several portraits of a "Jewish" Jesus. But we simply don't know if this is a depiction of Isaac and Rebecca from the Book of Genesis or simply of a loving husband and wife.

A year later, Rembrandt posed the same female model as the mother in a painting entitled A Family Group. In this work - not on display in the London exhibit - the woman wears the same red dress. She assumes the same basic pose, the recipient of a touch of male affection. Only this time a baby boy places his hand above her breast, where the husband in ‘The Jewish Bride’ lightly grasps her bosom. Responding with heartfelt emotion, the woman places her hand on the husband and infant she loves.

The key to understanding ‘The Jewish Bride' and A Family Group is the "hand-eye motion" occurring in both pictures. The light, loving touch of the hands confirm the light of love in the protagonists' eyes. Seventeenth century painters routinely allegorized love. In the ‘The Jewish Bride’, Rembrandt painted the real thing.

The intense and genuine emotional qualities of ‘The Jewish Bride' are the characteristic attributes of all of Rembrandt's later work. This sense of real, actual feeling - as opposed to allegory - unites very dissimilar works in subject matter.

The Conspiracy of the Batavians under Claudius Civilis and ‘The Syndics’ were painted around the same time, 1662. Their respective fates demonstrate the shifting fortunes which befell Rembrandt. 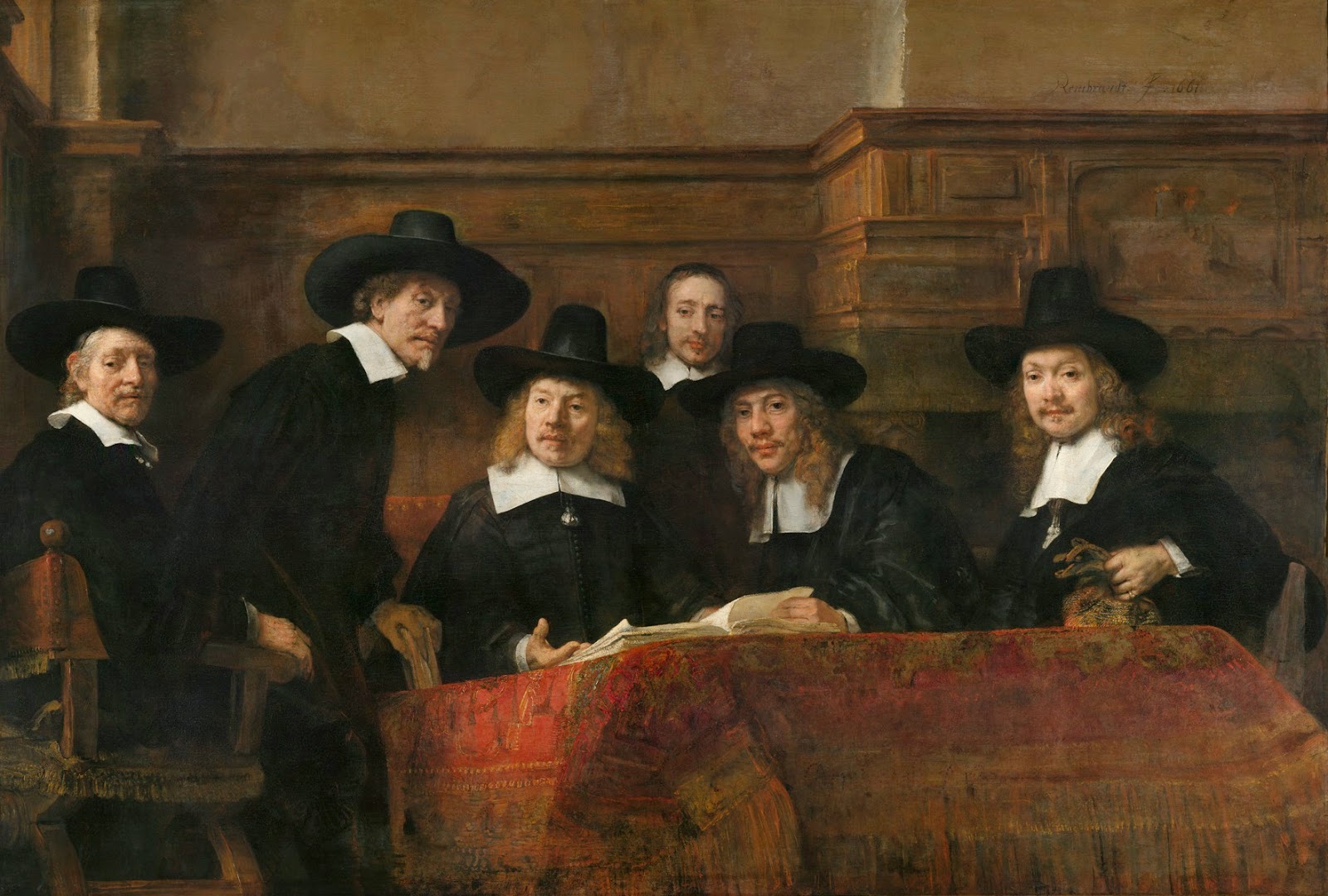 The Sampling Officials of the Amsterdam Drapers’ Guild, known as ‘The Syndics’ was a major success. The cloth makers who commissioned the painting placed it in their headquarters, the Staalhof. It proudly hung there until 1771 when it was transferred to Amsterdam’s town hall and eventually to the Rijksmuseum.

‘The Syndics’ was a critical success because the group portrait by Rembrandt presented the Dutch as they wished to be seen in the 1660's. The United Provinces had beat-off the Spanish invaders. The merchant classes, like these alert, intelligent men who are engaged in quality-control of a piece of fabric, were now masters of their own destiny.

The Conspiracy of the Batavians under Claudius Civilis recalled earlier events in Dutch history. The Batavians were the ancestors of the Dutch, who launched a revolt against the Romans in 69 AD. Their leader, Claudius Civilis, chose his moment well and nearly succeeded. The Roman Empire was torn apart by civil war following the death of Nero and Civilis won several victories against the over-stretched Roman legions.

This theme certainly related to the circumstances of the Dutch revolt against Spain which began in 1566. It too had been a desperate struggle, lasting eighty years before Spain retreated. Rembrandt depicted Civilis as a one-eyed warrior swearing fellow Batavians to heroic deeds in a sacred grove of trees. This was based on the account by the Roman historian Tacitus, though the turban-like crown worn by Civilis comes straight from Rembrandt's imagination.

The burgomasters of Amsterdam who commissioned the painting of Civilis and the Batavians should have been pleased. They decidedly were not. The vast size of the original work, 550 cm high and 550 cm wide, showing the grove and other figures, is sometimes thought to have been a strike against the work. In fact, seven other works of equal size where also planned. 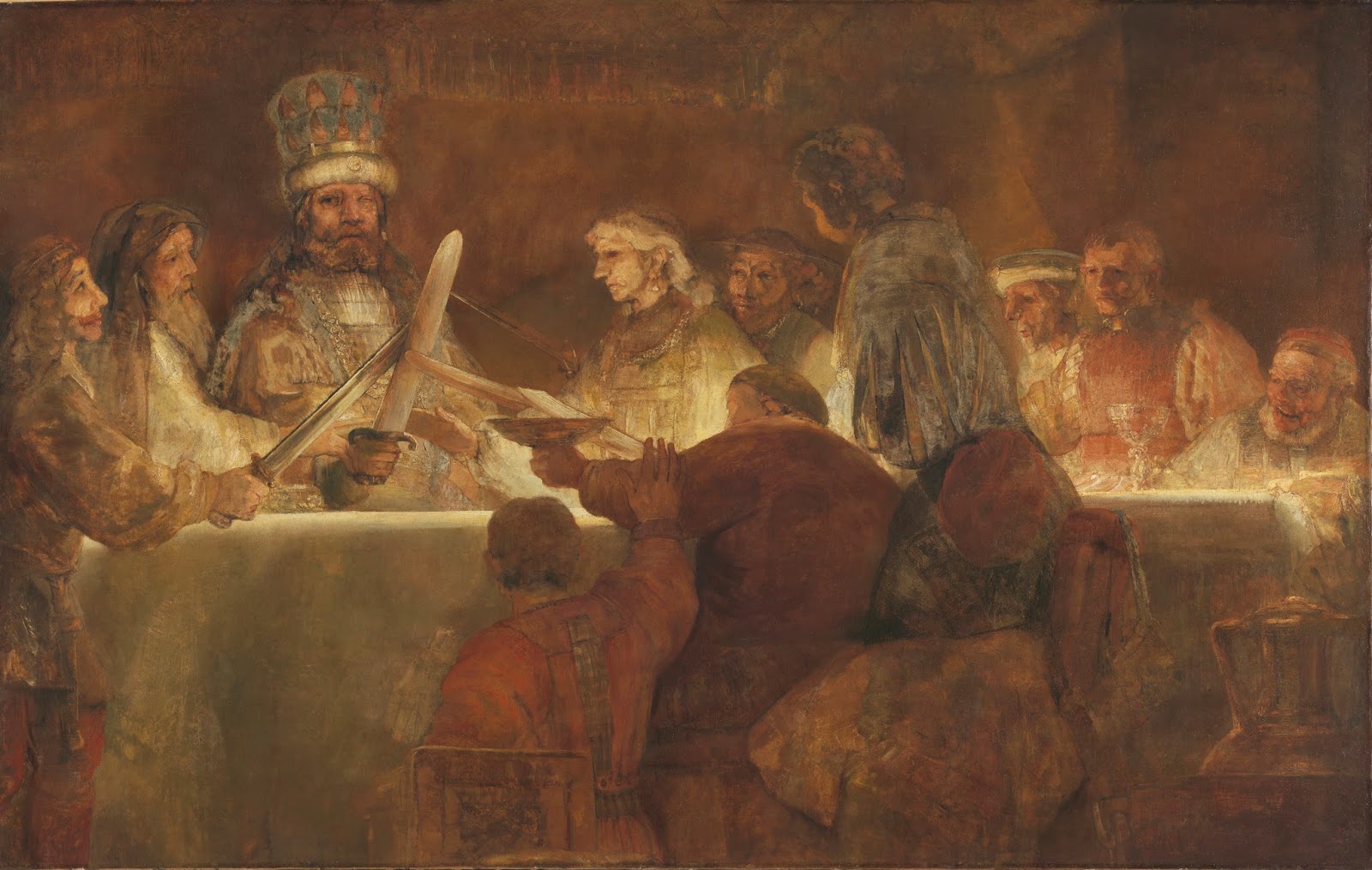 Rembrandt, The Conspiracy of the Batavians under Claudius Civilis,1662

Why did Rembrandt's epic painting fail? The reason lies in its relative historical accuracy. Rembrandt depicts Civilis and his men as conspirators in a dark, dank forest rather than as heroes on horseback. Civilis and his warriors are ordinary men planning to fight for their freedom in a campaign that stood a good chance of failing - and ultimately did. The Romans always won the last battle.

The Dutch by 1660 thought of themselves as winners. They did not want to be reminded of the backs-to-the wall early years of the war with Spain. Despite scaling the painting down to its present size, 309 cm x 196 cm, Rembrandt's The Conspiracy of the Batavians under Claudius Civilis was rejected. It was eventually sold and transported to Sweden.

Rembrandt succeeded with ‘The Jewish Bride' and ‘The Syndics’ because of his ability to evoke the essential character of the people he painted. Other painters could boast of their fidelity to detail. Rembrandt increasingly disregarded the fine points of clothing and accoutrements in favor of fidelity to the human spirit.

Rembrandt probed the psychological depths of humanity in each of the genres and techniques at which he put his hand. His self-portraits are among the most analyzed in this respect and the National Gallery exhibit has two of his best on display. 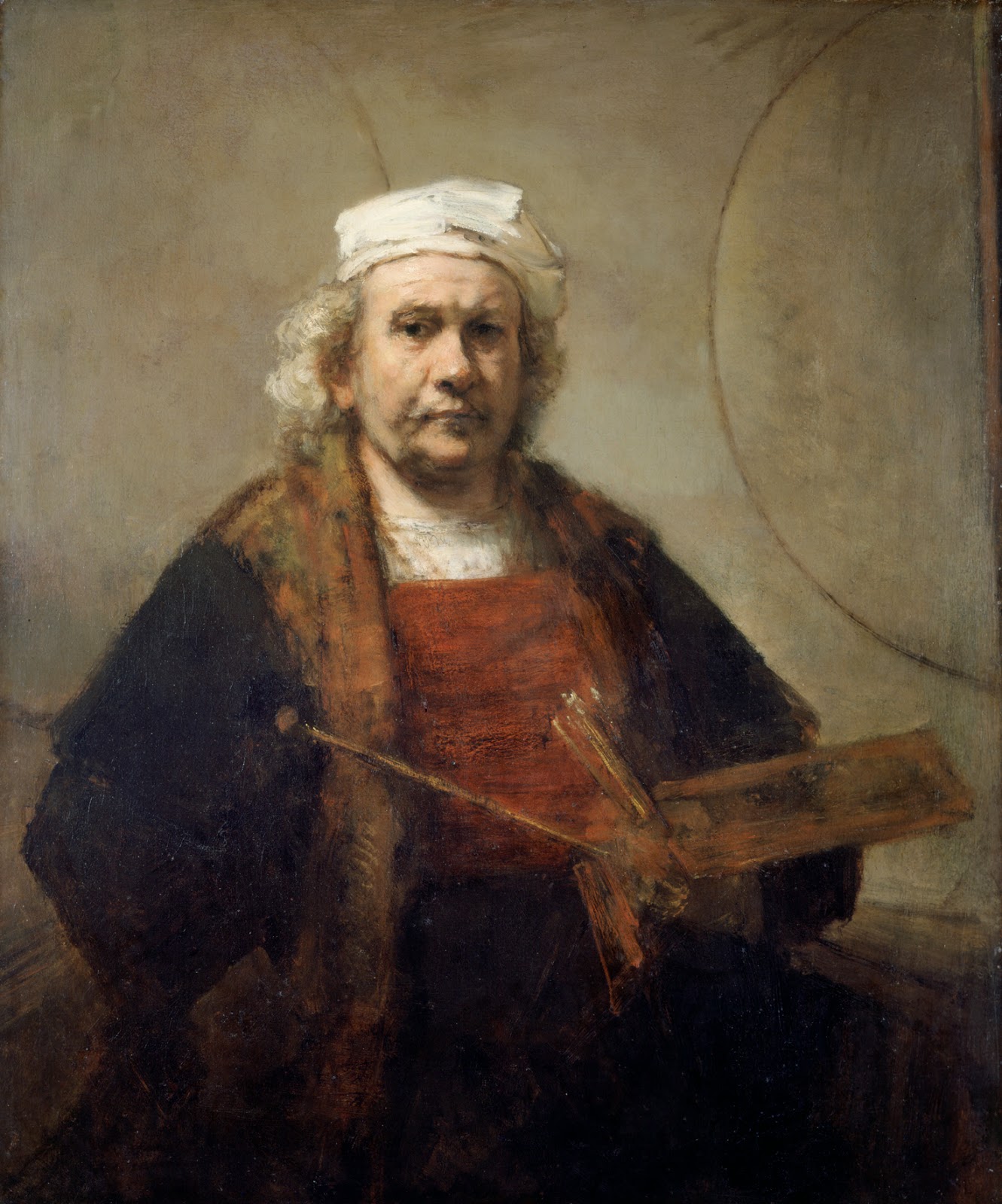 Rembrandt, The Self-Portrait with Circles, 1665-69

These are the National Gallery's Self Portrait at the Age of 63 and The Self-Portrait with Circles from the Kenwood House collection. This famous work, created between 1665 and 1669, places an element of mystery into the mix. Was Rembrandt making a statement about his virtuosity in being able to paint a perfect circle? Or do these geometric shapes refer to the circle of human life, which was coming to a close for him?
Rembrandt offers no clues to these questions. The National Gallery exhibit wisely takes a thematic approach to Rembrandt's art rather than tracing its year-by-year "development." Rembrandt painted over 40 self-portraits throughout his artistic career. Likewise, he painted the same basic genre types. Where "development" occurs is in Rembrandt's psychological insight and his ability to evoke the mysteries of human life. That is what makes "late" Rembrandt so special.

Look for instance at A Woman bathing in a Stream, painted in 1654. Is this another rendering of "Susanna and the Elders"? Rembrandt had painted two earlier versions, both emphasizing the biblical heroine's chaste nudity. If Rembrandt intended to give this work a biblical connotation, it is quite beside the point. This masterful depiction of human and natural beauty needs no justifying theme. 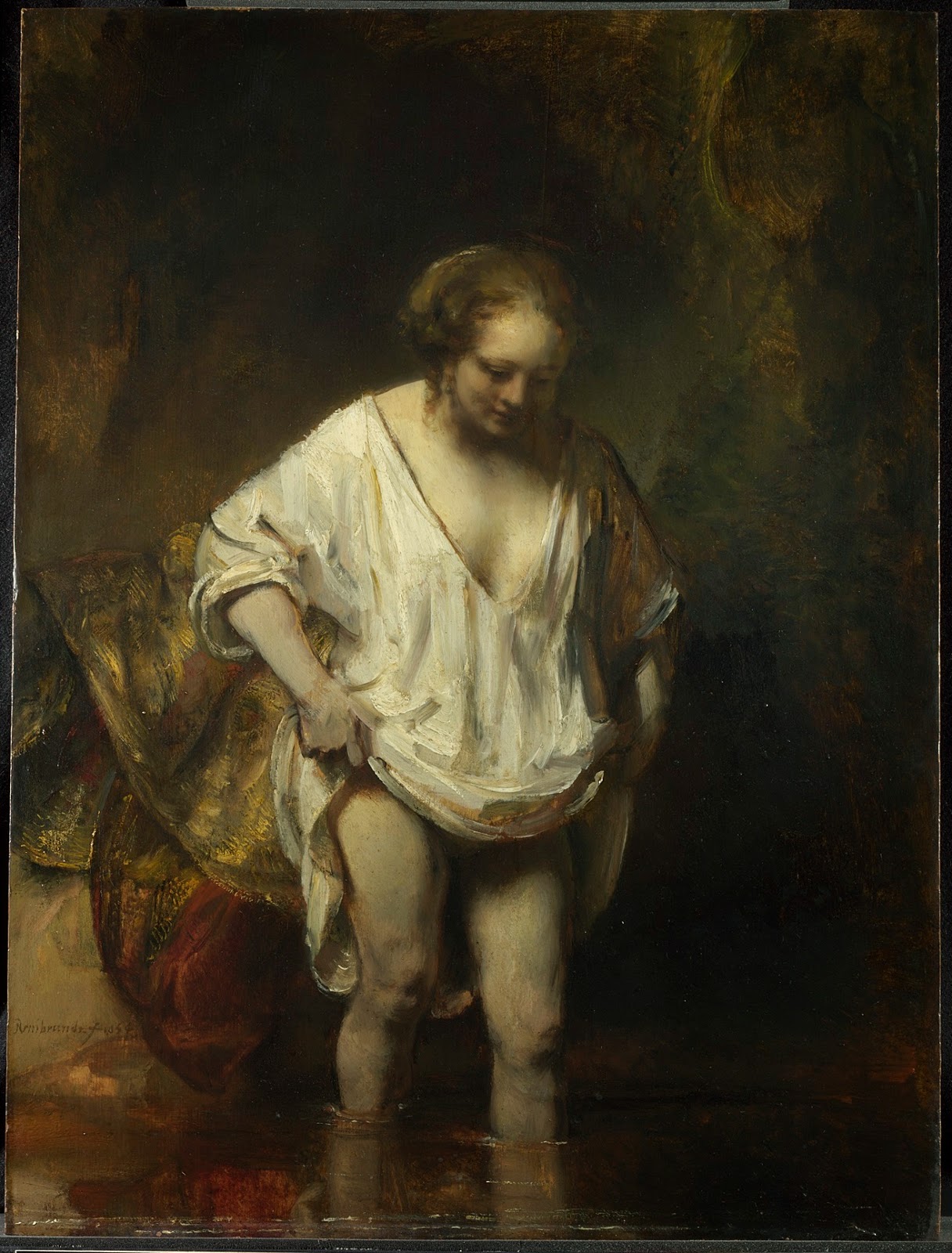 Rembrandt, A Woman bathing in a Stream, 1654

Here the young woman, almost certainly modeled by Hendrickje Stoffels, Rembrandt's common-law wife, wades into the river, lifting her chemise as she goes. An ornate, crimson and gold dress, not unlike the one later worn by the ‘Jewish Bride' has been removed and left on the bank where its shimmering image is reflected in the mirror-like water. Rembrandt used quick, impressionistic strokes to paint the chemise, conveying the texture of the light cloth.

Such is the look of happiness and contentment on the young woman's face that this wondrous painting, one of the most beautiful works of art in the Western canon, might well be entitled "At Peace with the World."

As if to underscore the joys of life, Rembrandt made a rare brush and pencil sketch of Hendrickje the same year as A Woman bathing in a Stream. In what appears to be but a preliminary study, Rembrandt has in fact preserved a fleeting moment of time  for all time. 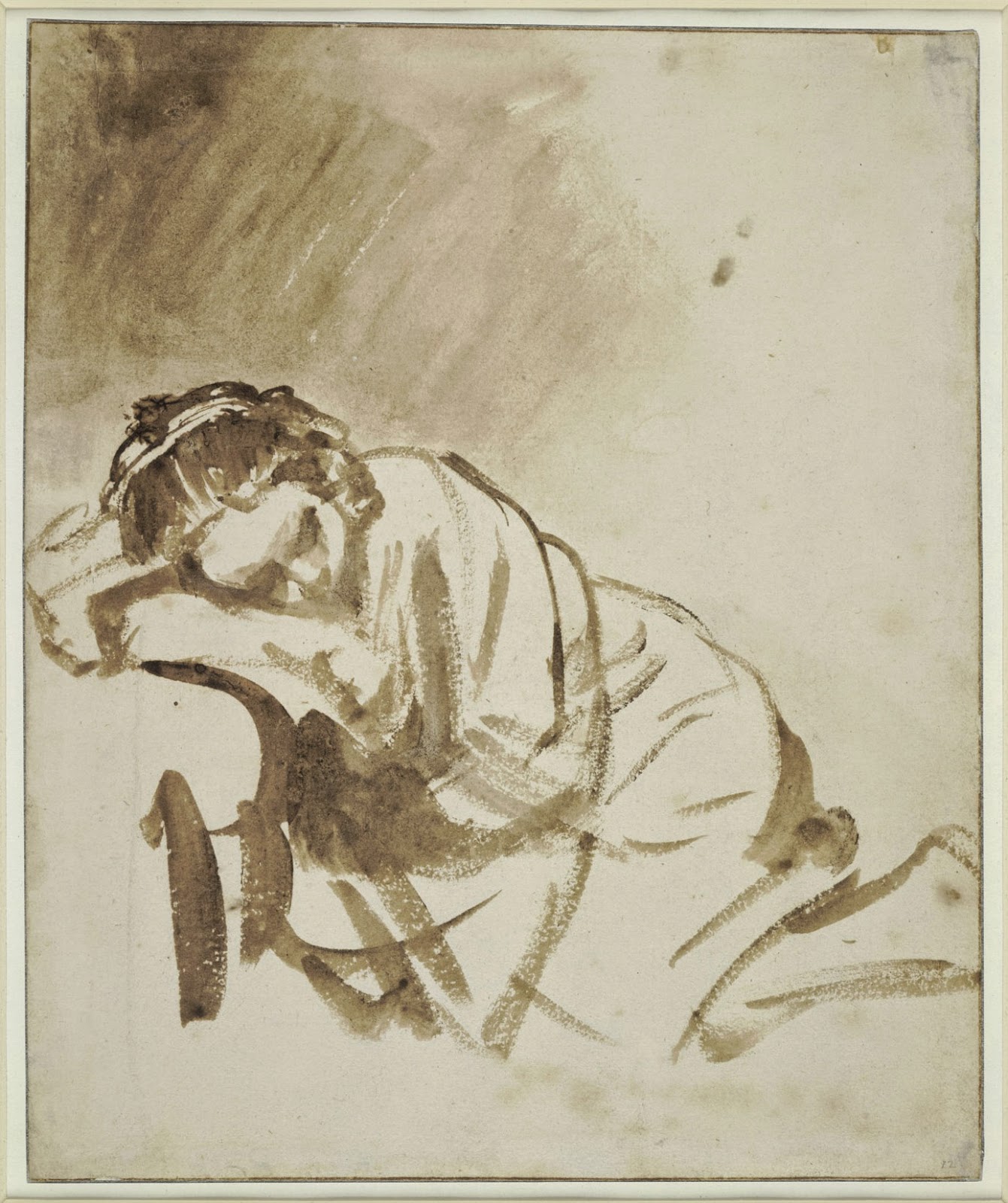 Rembrandt had few such moments of peace in the years following 1654. Two years later, he declared bankruptcy and in 1663 Hendrickje died of the plague. Titus, who posed frequently for his father,  died in 1668. Rembrandt's abiding love and pride in his son can be seen in the 1655 portrait of Titus as a young scholar and in a remarkable etching from a year later which shows how quickly youth yields to adulthood. 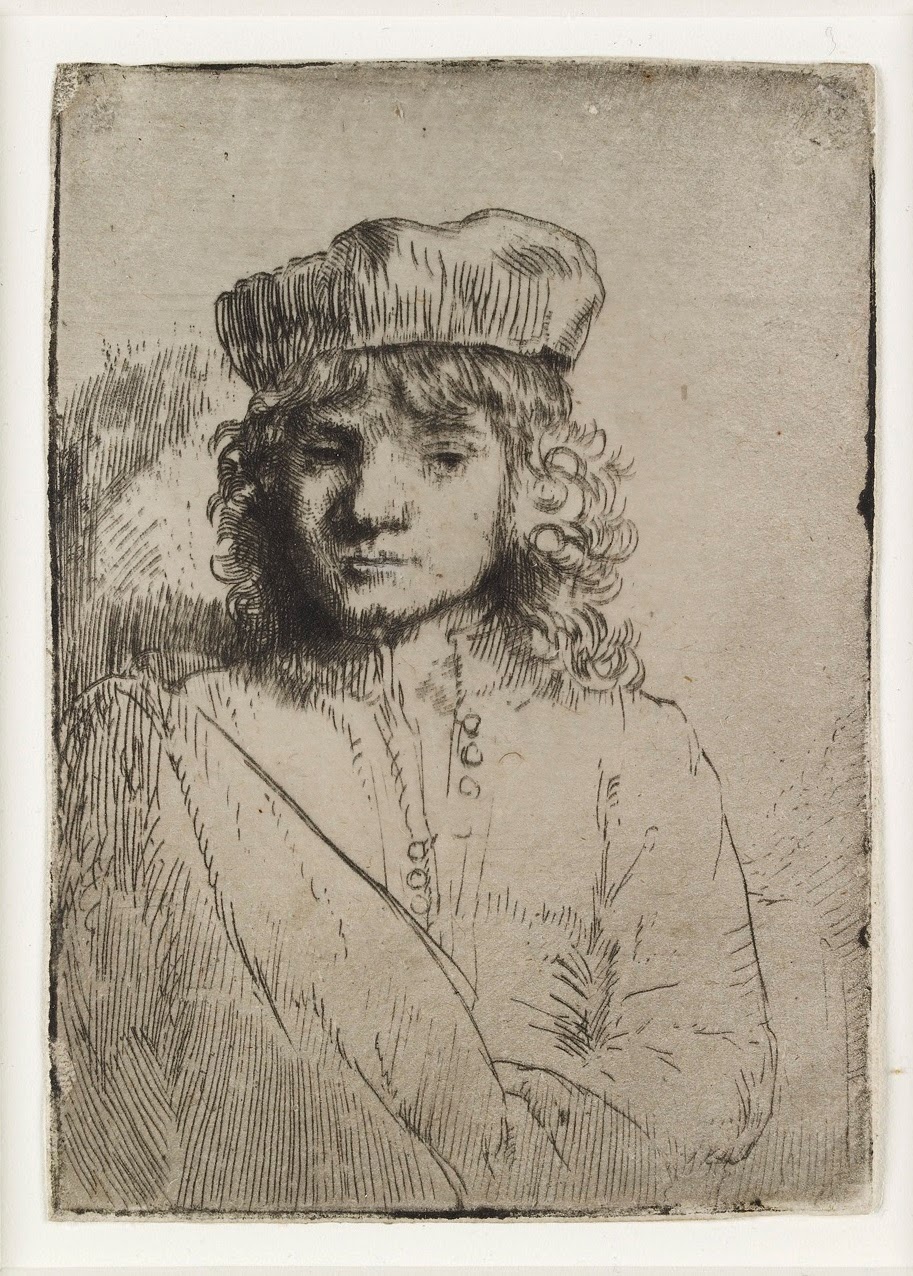 The sorrows of these years can clearly be seen by looking into Rembrandt's eyes in his Self Portrait at the Age of 63, painted just before he died in 1669. And look into the eyes of the dying Lucretia, the defiled, doomed Roman heroine who committed suicide to save the honor oh her family. The look of inexpressible pity that you glimpse there is not for her own plight alone but rather for all who suffer, in short for the whole human race. 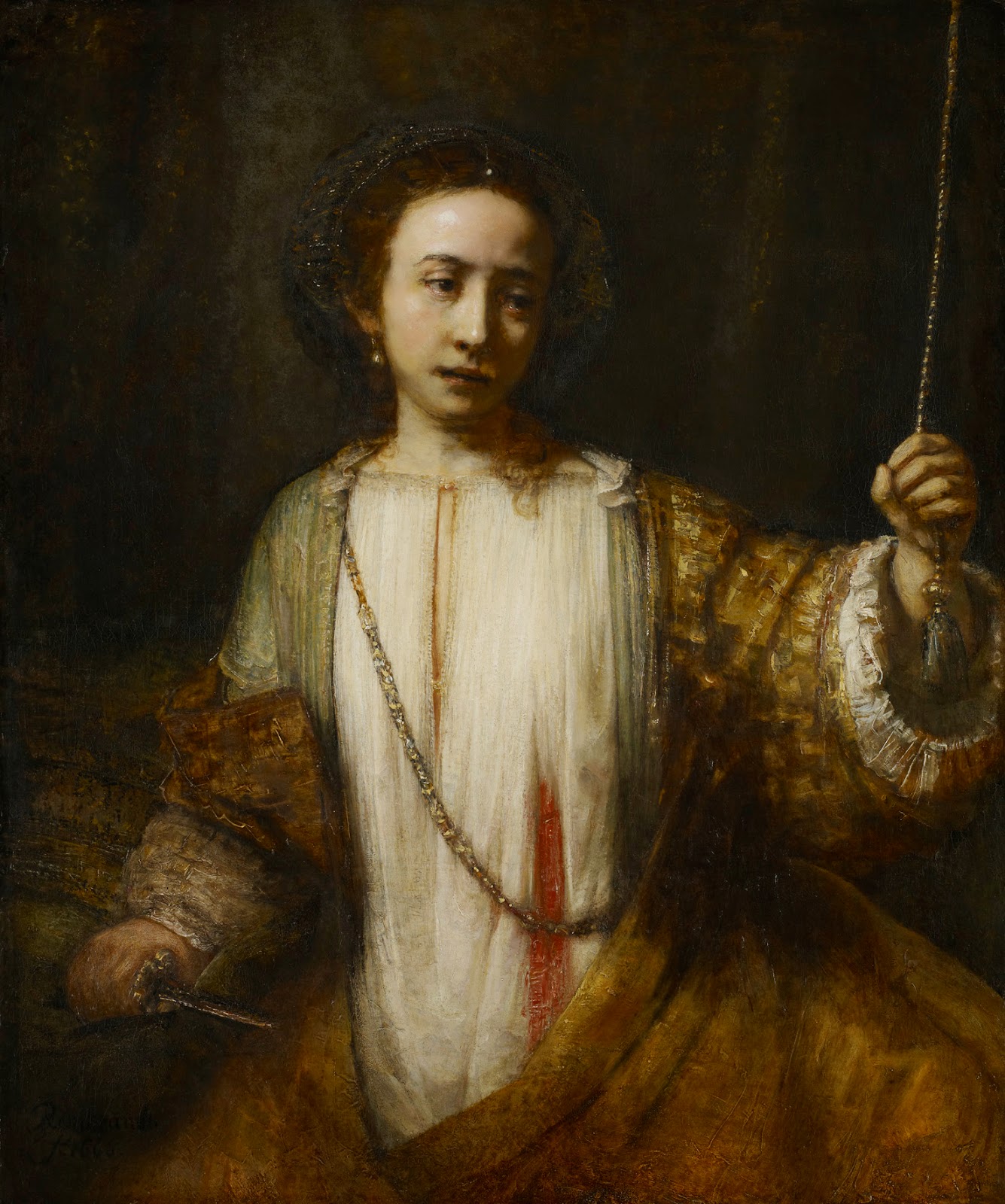 Rembrandt The Suicide of Lucretia, 1666

Rembrandt's humanity is what kept van Gogh transfixed in awe before ‘The Jewish Bride.' Rembrandt's profound, moving works also impelled van Gogh to move onward with his own life and art. And that is what this inspirational exhibit at the National Gallery of London does for those fortunate to share in its insights.

"I should be happy to give ten years of my life if I could go on sitting here in front of this picture for a fortnight, with only a crust of dry bread for food,” van Gogh exclaimed to Anton Kerssemakers.

But then van Gogh added, "Well, never mind, we can't stay here forever, can we?”

Rembrandt The Conspiracy of the Batavians under Claudius Civilis, about 1661-2 Oil on canvas 196 x 309 cm The Royal Academy of Fine Arts, Sweden © Rijksmuseum, Amsterdam

Posted by Art Eyewitness at 7:36 PM