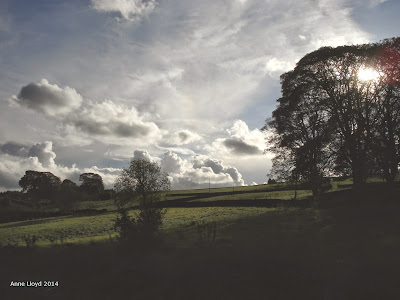 In 1810, J.M.W. Turner observed a thunderstorm rolling over the hills of Yorkshire. He quickly began to jot-down notes about the cloud masses, lightning flashes and sky tones of the storm.  When he had finished, Turner remarked to a companion, Hawkesworth Fawkes, about his observations.

"There," Turner said, "Hawkey, in two years you will see this again, and call it Hannibal crossing the Alps.”

Two years later, Turner did indeed exhibit a monumental painting based on his notes, Snow Storm: Hannibal and his Army Crossing the Alps. The timing of the exhibition coincided with the first reports of the winter blizzard that had engulfed Napoleon's army retreating from Moscow in 1812, just as the storm strikes Hannibal's troops in Turner's painting.

Snow Storm: Hannibal and his Army Crossing the Alps is actually a very English painting. In fact, it is a very Yorkshire painting, as my wife and I discovered recently. This, in turn, is deeply significant for understanding the role of British artists like Turner and John Constable, in the rise of landscape painting during the nineteenth century.

In October 2014, my wife, Anne, and I spent five days in Haworth, Yorkshire. This remarkable village is the site of the Brontë Parsonage Museum and the moor country which figures so prominently in the novels of three literary sisters, Charlotte, Emily and Anne Brontë.

Thanks to the location of our B&B, we were able to look directly from our room onto St Michael's Church, were Rev. Patrick Brontë, father of the Brontë sisters, was the Church of England minister from 1820 to 1861.

From our window, too, we had a front-row seat of the amazing skyscape over the West Riding countryside of Yorkshire, leading to Penistone Hill and Top Withins. This, of course, is Brontë country, par excellence, but the spectacle of nature that we observed applies equally to the visionary art of Turner and Constable, Romantic-era contemporaries of the Brontës. 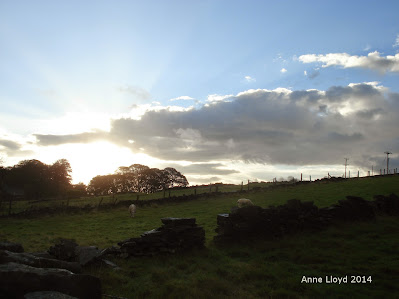 Over the course of our visit, Anne, who is a gifted photographer, documented the ever-changing sky above Haworth. Sunsets, misty mornings, rainbows, passing rain squalls, a full moon - it was truly amazing to witness the variability of nature. We even managed to dodge heavy rain showers which took place at night.

Our extraordinary weather "karma" recalled a famous remark by Turner around the time that he painted Hannibal and his Army Crossing the Alps:

In our variable climate where the seasons are recognizable in one day ... where nature seems to sport in all her dignity and dispensing incidents for the artist's study ... how happily is the landscape painter situated, how roused by every change of nature in every moment, that allows no langour even in her effects which she places before him...

Anne and Turner were in agreement. Recording the changes in English weather permits no "langour." The restless, threatening skies that Anne photographed from the narrow path to Oxenhope, often used by Charlotte Brontë, brightened a few moments later with almost summer-like sunshine.

When we wistfully concluded our stay in Haworth, we journeyed to London for a few days of museum visits. There we saw the Late Turner – Painting Set Free exhibition, which appears at the Tate Britain Museum, September 10, 2014 – January 25, 2015, and Constable: The Making of a Master, at the Victoria and Albert Museum, September 20, 2014 to January 11, 2015.

Both exhibits are magnificent, with many of the greatest paintings of the two artists on display. The exhibition at the V&A presents works by artists who influenced Constable's development like Peter Paul Rubens. Also on view are Constable’s most famous work, The Hay Wain (1824), and the full-scale preparatory painting that some art scholars now regard as a superior work of art to the finished version. 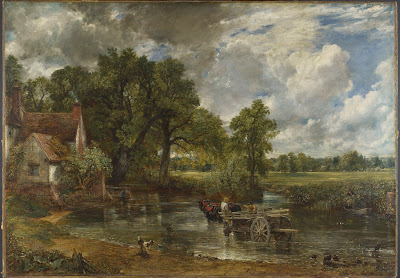 It is fitting, in an ironical way, that the Turner and Constable exhibits should appear at the same time. It takes years to organize and mount art exhibitions. The timing of the two shows was probably - in the first stages of planning, at least - coincidental.

The reality was very different. Turner never met a landscape painter who was anything but a rival. In 1832, at the Royal Academy exhibition, he retouched a quiet Dutch-style seascape of his, Helvoetsluys, with a red buoy to steal some of the thunder from one of Constable's "six-footers, The Opening of Waterloo Bridge, hanging next to it in the gallery.
Constable noticed the effect immediately, commenting ruefully about Turner, "He has been here and has fired a gun."

Constable was not merely a competitor to Turner, however. Constable was also the protégé of Sir George Beaumont, co-founder of the National Gallery in London and a resolute foe of Turner. Beaumont maintained that Turner treated oil painting as an extension of water colors. Totally misunderstanding Turner’s brilliant grasp of light, Beaumont disparaged Turner’s art as the work of an "Old man," who "no longer saw or felt colour properly..."

Turner, who regarded himself as “the great lion of the day,” responded to Beaumont’s remarks with paintings ever more daring, ever more radiating light.

One could go on comparing and contrasting these two British painters, but there is one unifying theme to their respective careers: the centrality of observing the natural world. This was true of Turner and Constable throughout their lives, as the two exhibitions make clear. But I think that the experiences of "early" Turner and "early" Constable, as they developed their art in their English homeland, need to be appreciated.

That would appear to go against the claims that the decisive moment in Turner's career came at the end of the Napoleonic Wars, in 1815, when he and other British artists could travel to the continent of Europe. The "light of Italy" flooded onto Turner's canvases and his painting, tinged with hues of yellow, amber and gold, changed forever.

Turner's sojourns in Italy certainly had a major impact on his color palate.  Late Turner at Tate Britain presents two companion paintings, exhibited in 1839, that clearly manifest "the light of Italy." 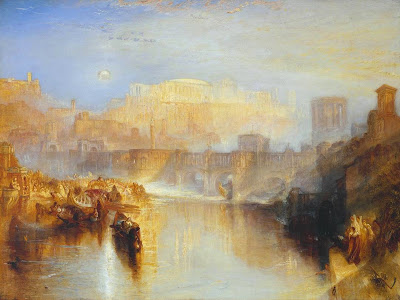 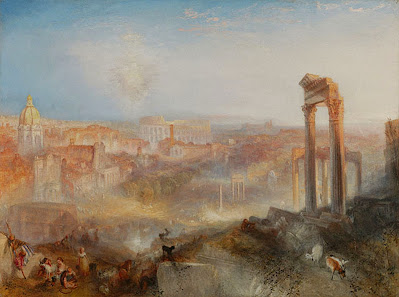 Ancient Rome; Agrippina Landing with the Ashes of Germanicus and Modern Rome - Campo Vaccino are displayed side-by-side in the Tate exhibit, providing insight into Turner's view of history and color theory. These were among the paintings which the cartoonist for the Almanack of the Month (June 1846) likely had in mind when he lampooned Turner confronting a canvas with a large mop for a paintbrush and a bucket of yellow paint.

Was this late-career change in color preference also reflected in the greatest of Turner's final paintings, Rain, Steam and Speed? This iconic work, painted in tones of burnished gold, ochre and misty gray, was the type of painting that Turner’s critics regarded as evidence that he had contracted “yellow fever.” 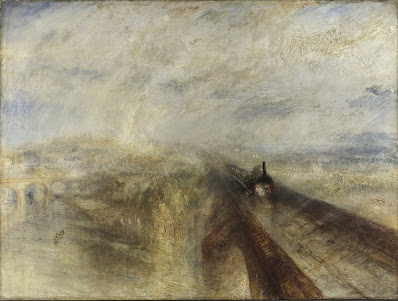 If so, Turner contracted the “disease” in England. An early work,  the hard-hitting Frosty Morning (1813) showing starving farm families, was painted with a gold and brown color scheme that had nothing to do with the “light of Italy.”

I saw the same colors while gazing at Haworth Moor from Penistone Hill – albeit in much more congenial circumstances than the hungry farm folk encountered in 1813. Frosty Morning was painted from a scene that Turner had witnessed in Yorkshire and when Claude Monet saw the painting decades later, he declared that Turner had painted it with “wide-open eyes.”

Constable painted with “wide-open eyes” too, but he focused his vision on the green fields of his boyhood home, the Stour River Valley in the county of Suffolk. Constable, unlike Turner, never traveled to the continent of Europe, even when The Hay Wain won a gold medal at the 1824 Paris Salon.

Constable was far from being a timid, unadventurous soul. He showed how artists can create universes of their own devising. These realms might be small in geographical scale, perhaps reduced to a single tree. But they could be limitless in an emotional, psychological sense. It was an artistic revolution as profound in its way as Turner's explorations of light. 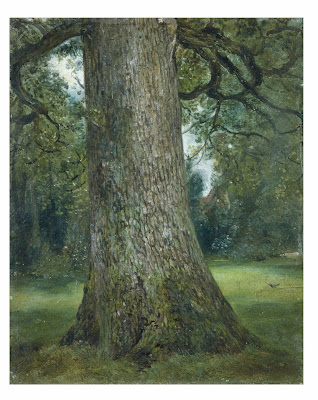 John Constable Study of the Trunk of an Elm Tree

“But I should paint my own places best," Constable affirmed, "painting is but another word for feeling.”

One of the most productive of Constable's "own places" was Hampstead Heath, where he relocated his family in 1819 in a brave, doomed effort to preserve the life of his beloved wife, Maria. She was stricken with tuberculosis as Emily and Anne Brontë were to be in the 1840's.

While at Hampstead, Constable did  "a good deal of skying," painting the ever-changing skies above the Heath. Constable's cloud studies, generally oil sketches on paper, painted directly from nature, are among his greatest works, valued by some scholars today even more than his grand "six-footers." 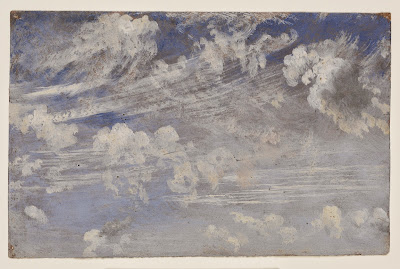 Turner painted in the open air too, using his facility with water colors to make rapid color sketches the way other artists might use a pencil.  But Turner and Constable, despite later claims were  not "Impressionists," as neither painted full-scale finished works out-of-doors. Nor were they seeking to make factual recordings of nature or daily life, merely for the sake of doing so.

Turner and Constable both observed and studied nature in close detail but - like true Romantics - sought to make a moral statement by their work, a gesture or "feeling" through the medium of painting.

During our visit to Haworth, Anne and I gained an appreciation for the kind of world in which the people of the Regency and early Victorian eras lived. Viewing the ever-changing skies above the Brontë Parsonage and wandering through the densely packed graveyard of St. Michaels Church  was both an inspiring and a sobering experience. Over 40,000 people were buried in that cemetery over the course of the 1800's, victims of cholera, typhus, tuberculosis and other Industrial Age killer diseases. Death was the constant companion of life. 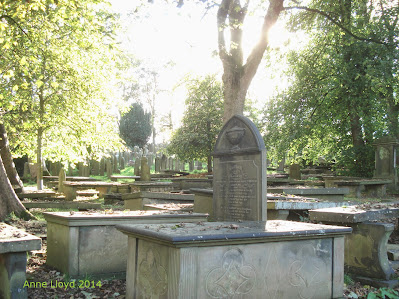 Constable, who was haunted by the death of his wife in 1828, dressed in mourning for the rest of his life. Yet the creative impulse that impelled him to become one of Britain's greatest artists, also enabled Constable to find solace and inspiration in the beauty of nature.

In 1836, a year before he died, Constable wrote that man's "nature is congenial with the elements of the planet itself, and he cannot but sympathize with its features, its various aspects and its phenomena in all situations. We are no doubt placed in a paradise here if we choose to make it such …"

The Romantic era, the age of Turner, Constable and the Brontës, had precious little romance to it. But the eyes and minds of these remarkable individuals were able to look beyond the filth and death around them, to see or at least to hope for a better, more beautiful world.

Posted by Art Eyewitness at 2:34 AM