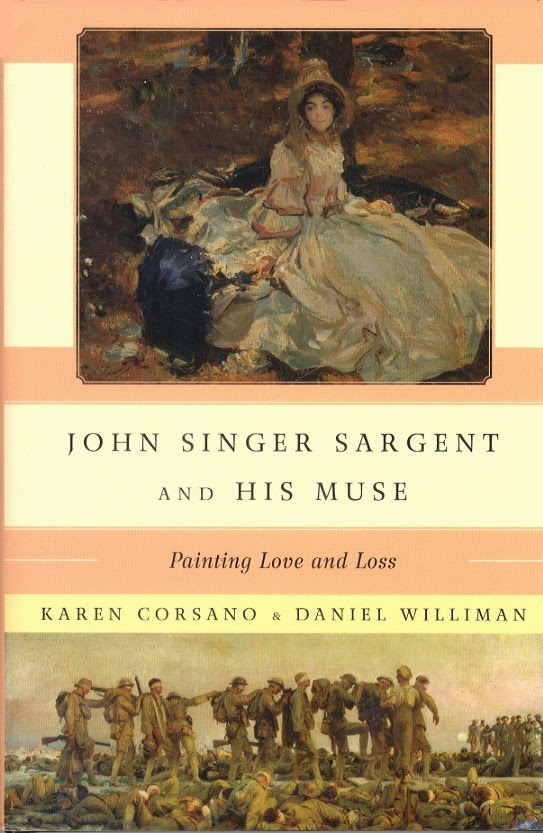 John Singer Sargent and His Muse

A century ago, officers in the German army and navy regularly raised their glasses of brandy with the toast, "Der Tag."

Der Tag: "The Day." The day that war would begin.

This year marks the one hundredth anniversary of "Der Tag," the outbreak of World War I. Several shelves of new books on the events of 1914-1918 have appeared recently, with more no doubt on the way. Of particular note is John Singer Sargent and His Muse by a husband-wife team of historians, Daniel Williman and Karen Corsano. This powerful book describes the tragic result of the rush to Armageddon in August 1914 in a way that is not easily forgotten.

The subtitle of this evocative book leaves no doubts about the human cost of the war: Picturing Love and Loss.

In the case of John Singer Sargent, the loss involved the death in 1918 of his beloved niece, Rose-Marie Michel, killed by a shell fired by long-range German cannons. 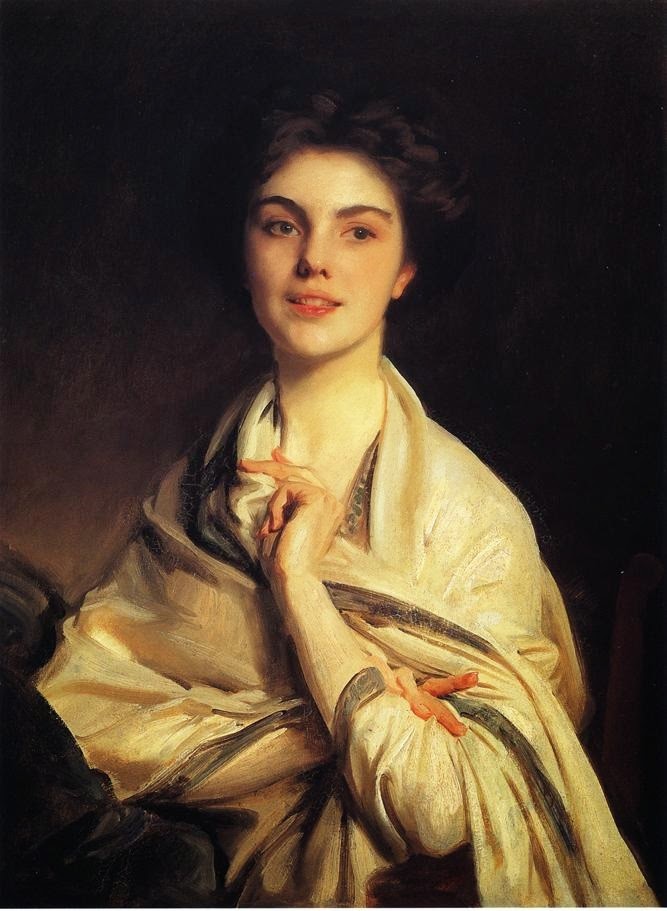 This beautiful, vivacious young woman had posed as Sargent's model in several of his greatest paintings, including The Black Brook. After Rose-Marie's crushed body was recovered from the rubble of a Paris church in March 1918, Sargent set to work on a painting that evoked the futile horrors of the Great War.

The authors relate this story of wartime sacrifice and artistic redemption in a carefully constructed, tension building manner. Set-piece chapters deal with the early life of Rose-Marie Michel and her experience of World War I. The surreal moment of horror when Rose-Marie was killed during the bombardment of Paris is described in an understated, almost clinical fashion. This sets the stage for the poignant account of the way that her family, including her French in-laws, grappled with overwhelming  loss.

John Singer Sargent responded to the death of Rose-Marie Michel by painting the final masterpiece of his career. But the picture that emerged from this shattering incident was not a memorial painting of his niece. Instead, it was the vast, heart-searing Gassed, now in the collection of the Imperial War Museum.

Gassed, like the famous scene in the film Gone with the Wind which shows row upon row of wounded Confederate soldiers, depicts war solely in terms of suffering. There is not a hint of glory or world-changing consequence in this painting. There is only pain. And thanks to details of deadly irony so subtle that it is easy to miss them, there is yet more pain.

Gassed shows a casualty-clearing station where lines of British troops, blinded by an insidious form of poison gas, nicknamed "mustard" gas, are awaiting treatment. Sargent had witnessed such an appalling scene during a tour of the Western Front shortly after the death of his niece.

Some of the men with bandaged eyes regained their eye sight, or at least partial use of their eyes. But there are many forms of blindness and Sargent's Gassed addresses the most acute form of crippled vision - moral blindness. 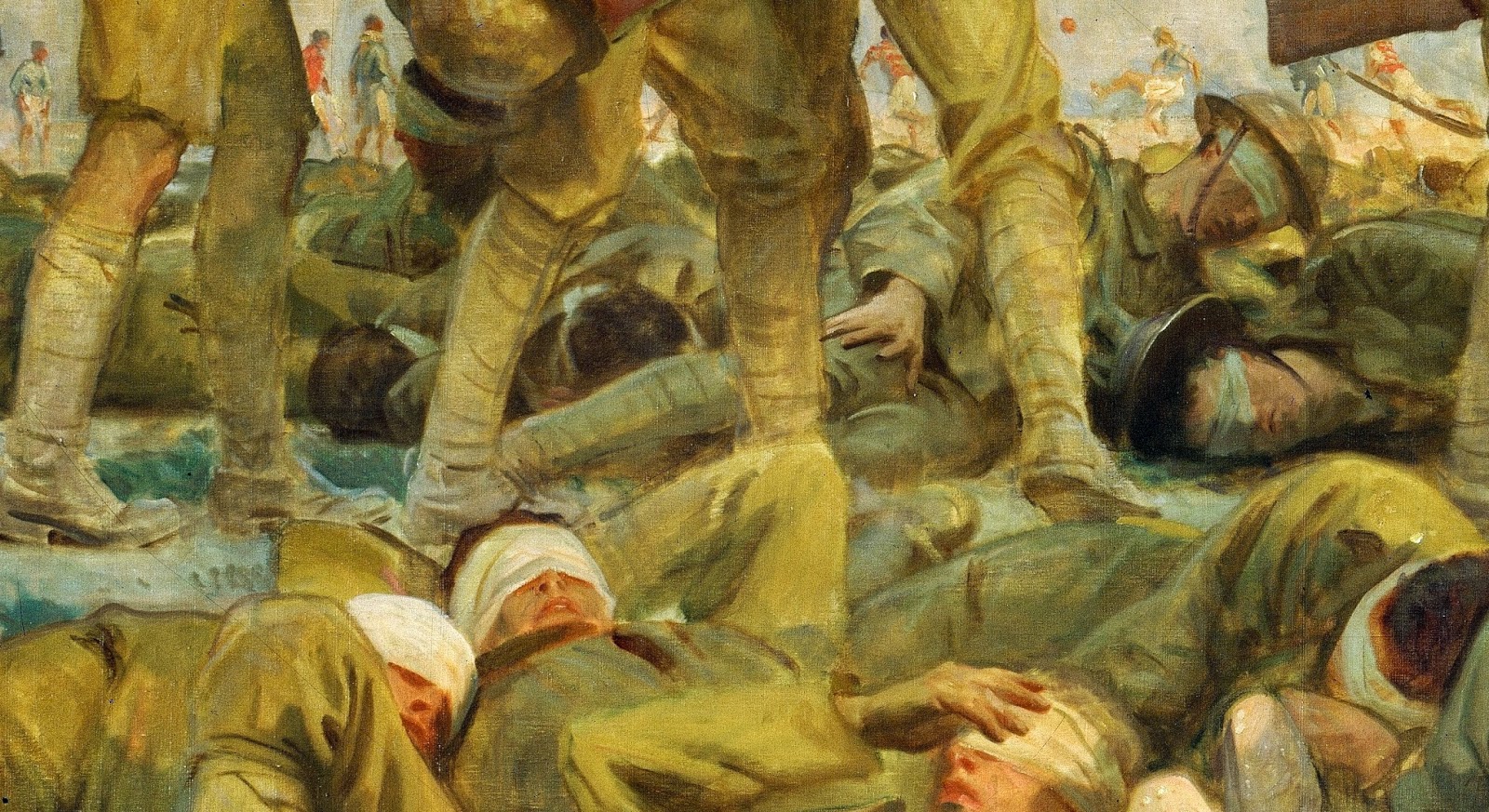 If you look closely, off in the distant background of Sargent's painting, other soldiers are playing rugby football. They are "killing" time while awaiting their turn to be sent to the trenches. Sargent underscores the insanity of war by pointing to ways that people respond to and normalize it – reacting with complacency or helpless indifference, averting their gaze elsewhere or shutting their eyes altogether to the evil around them.

The result, magnified by tens of millions, is the death of innocent persons like Rose-Marie Michel.

Corsano and Williman wisely refrain from making cosmic interpretations of human conflict. Instead, they focus on the case history of a victim of war and the response of her bereaved family. In the tragedy of the one is the tragedy of the many.

Rose-Marie Michel (1893–1918) was the daughter of Sargent's sister, Frances Ormond. Sargent and his sisters - to whom he was deeply devoted - were born in Europe of American parents. Sargent spent his whole life traveling throughout Europe, with England as his base following the Madame X scandal of 1884. By the time Rose-Marie reached adolescence, Sargent was fed-up with painting the portraits of the "high and mighty." Portraiture was “a pimp’s profession” Sargent declared and he yearned to paint pictures of natural beauty.

Rose-Marie became Sargent's model and his muse. She posed for several achingly beautiful works such as Nonchaloir (Repose), now in the collection of the National Gallery in Washington, Two Girls Fishing at the Cincinnati Art Museum and The Black Brook, one of the most celebrated paintings at the Tate Gallery in London not painted by J.M.W. Turner. 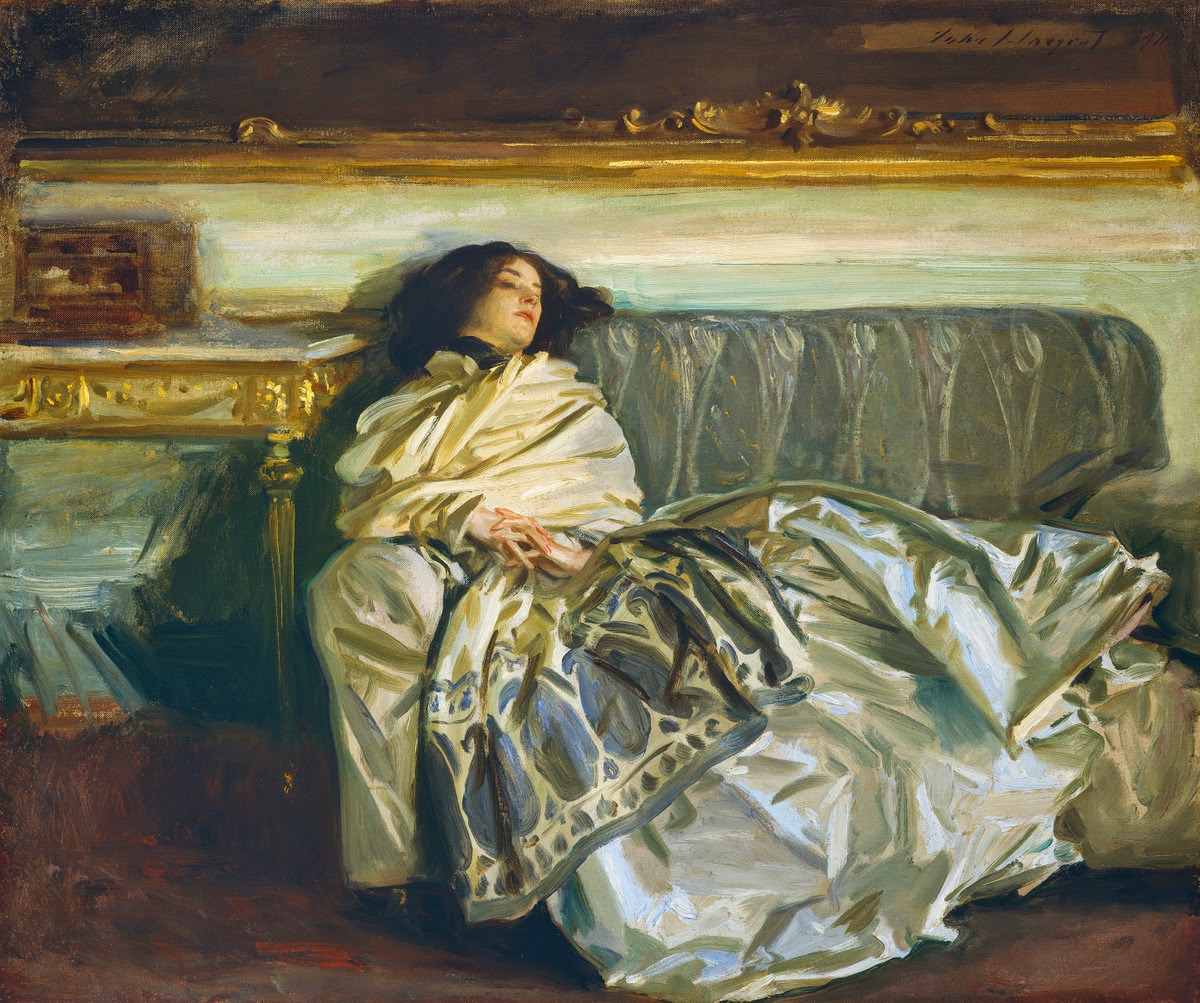 This fairy tale story reached a particularly happy conclusion when Rose-Marie Ormond married a brilliant French scholar, Robert Michel. He was the son of France's leading cultural critic, who had defended Sargent's art when others in the French art establishment had ridiculed him.

The "stars" seemed to be wholly in favor of Rose-Marie and Robert Michel. Theirs was a love match and a marriage of equals, with each totally devoted to the other.

Tragically, the champagne salutations to the bride and groom in 1913 came at a time when the "Der Tag" toasts of the German officer corps were building in fervor. "Der Tag" came in August 1914 and in October Robert Michel was killed in action, making him one of the first of Europe's "Lost Generation" that was to include Franz Marc and Wilfred Owen.

The widowed Rose-Marie Michel  chose to remain with her French in-laws and served throughout the war in a hospital in Paris, caring for blinded soldiers.

In late March 1918, the Germans prepared Operation Michael to breakthrough Allied lines and seize Paris. Having helped Vladimir Lenin travel from Switzerland to foment revolution in Russia, the Germans were able to bring vast numbers of troops from the Eastern Front to attack France. In a crude rehearsal for the Blitzkrieg of World War II, the Germans also unveiled a terror weapon aimed at civilians: the Paris Gun.

These cannons were fitted with long barrels enabling the shells they fired to reach the thin air of the stratosphere.  The German guns began to bombard Paris at the extraordinary range of seventy miles. The same, though much more sophisticated, ballistics formula was incorporated in the design of the V2 rockets launched against London in 1944-45.

As the authors relate, on March 29, 1918, Rose-Marie Michel took some time from her nursing duties to attend a performance of classical music at the church of St. Gervais. It was Good Friday.

Shortly before the recital began, a shell fired by one of the Paris Guns hit the roof of St. Gervais. Huge blocks of shattered masonry crushed the congregation gathered below, including Rose-Marie Michel. 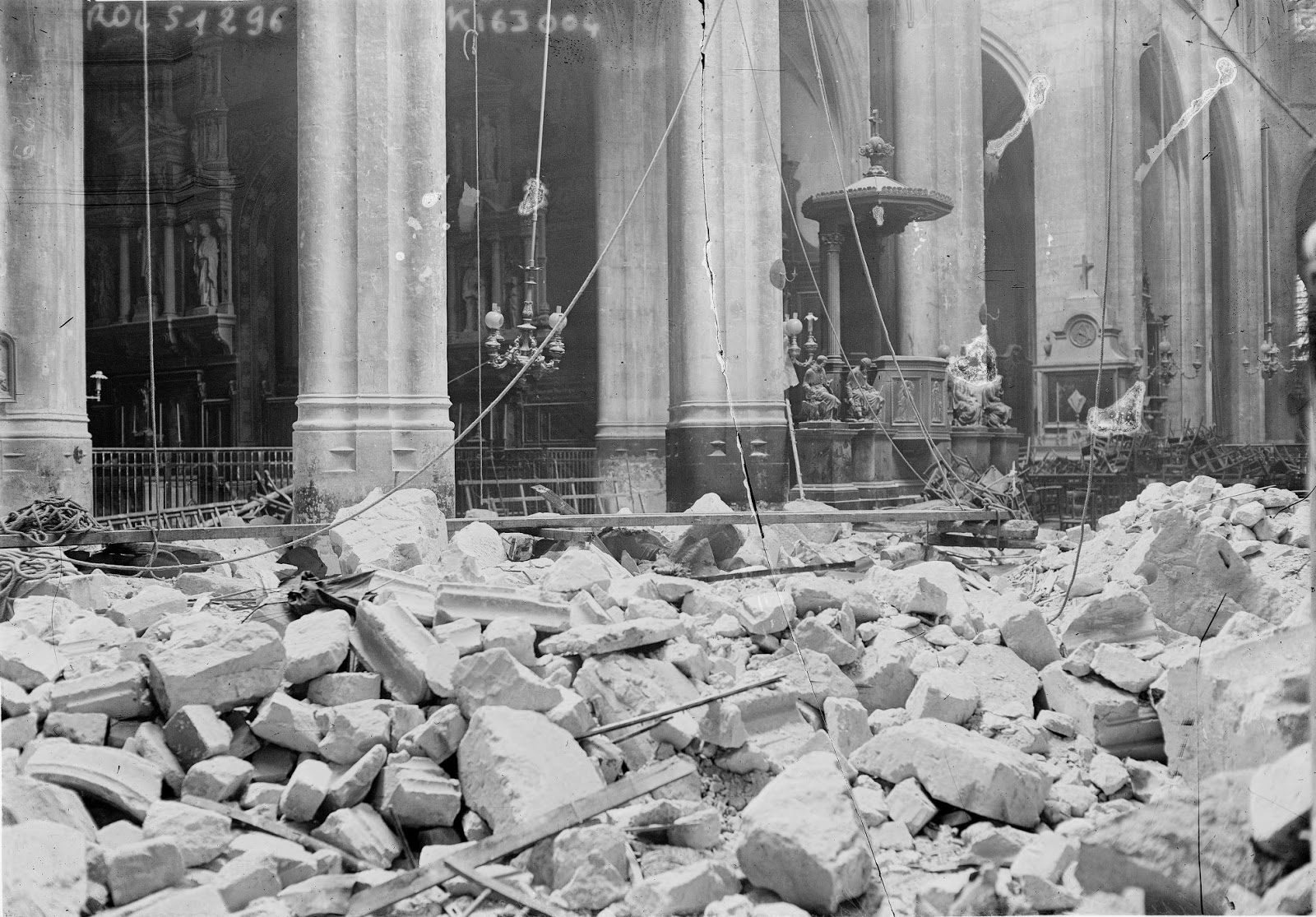 In losing her life, Rose-Marie Michel helped her uncle find - or at least rediscover - himself as an artist. After the United States joined the Allied war-effort in 1917, Sargent became a war artist. But John Singer Sargent, urbane man of the world, was not psychologically prepared. 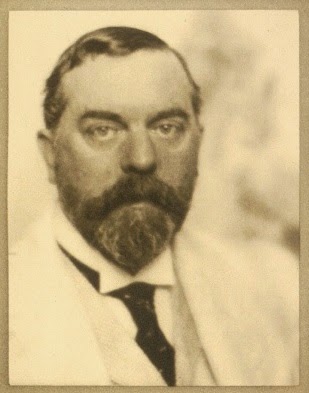 The death of his beloved Rose-Marie changed that. Sargent found his subject. The lines of blinded soldiers in Gassed are an indirect tribute to the brave young woman who, having lost her husband, devoted herself to nursing other soldiers, robbed of their sight by the war.

I saw Sargent's Gassed in 1999 at an exhibit of Sargent's work at the National Gallery in Washington D.C. I must admit that I was not overly impressed with this painting, because I thought that actual photos from World War I were more authentic and therefore more hard-hitting. 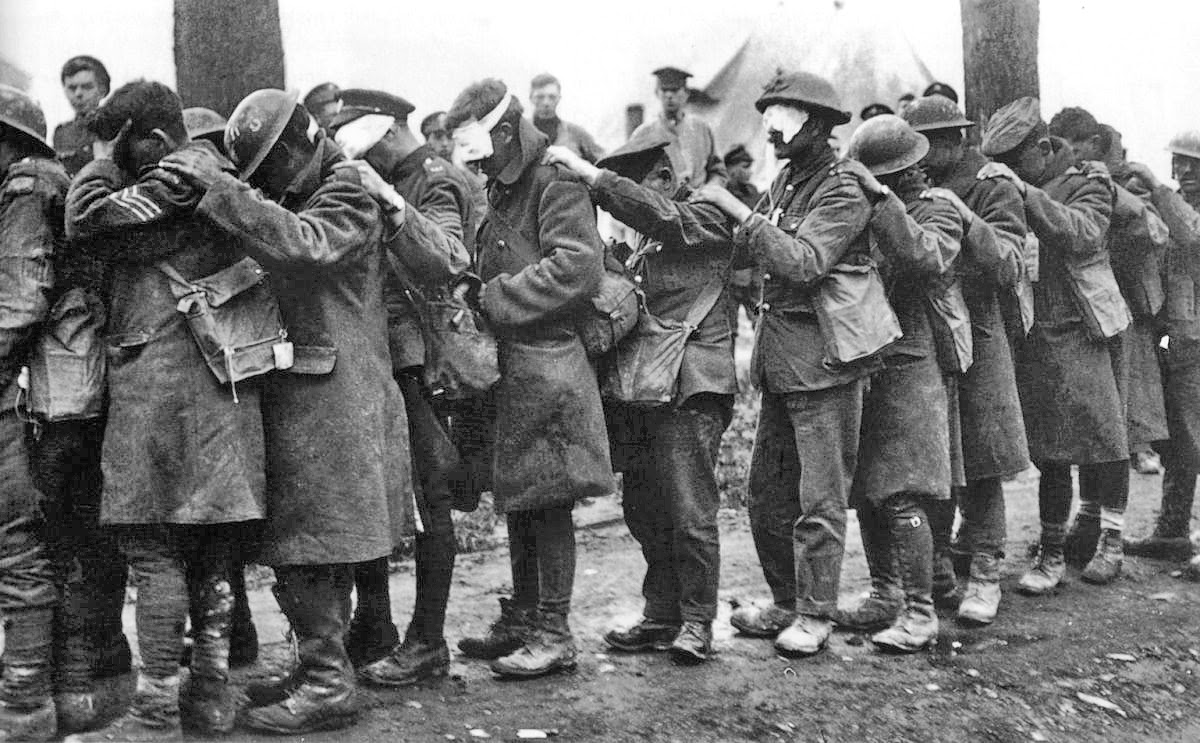 I no longer feel that way, thanks in large measure to Corsano and Williman's splendid book. In many ways, Sargent's Gassed is the last great narrative painting of the nineteenth century, though completed in 1919. For all that, Gassed is an essential work in the canon of Western art.

Reading John Singer Sargent and his Muse and writing about it have posed a real challenge to me. Thinking about the circumstances of Rose-Marie Michel's death caused me to confront an unpleasant fact. The moral blindness that blights our contemporary world is a living legacy of the War to End All Wars.

Reflecting on the tragedy of Rose-Marie Michel and John Singer Sargent’s Gassed, I am reminded of the wise words of Oscar Wilde:

There is the same world for all of us, and good and evil, sin and innocence, go through it hand in hand. To shut one’s eyes to half of life that one may live securely is as though one blinded oneself that one might walk with more safety in a land of pit and precipice.