Assyria to Iberia at the Dawn of the Classical Age at the Metropolitan Museum of Art in New York (September 22, 2014–January 4, 2015)

Homer and the Epics Gallery at the Museum of Fine Arts, Boston

Never underestimate Homer. The Iliad and The Odyssey have a curious habit of surprising us, taking us to places and thoughts we never imagined we would go. These epic poems possess a relevance to both contemporary events and the timeless challenges of life that is often uncanny. If a blind poet named Homer never existed, then somebody in antiquity possessed a degree of human empathy that has never been surpassed - and rarely equaled.

Adam Nicolson's new book, Why Homer Matters, directly addresses these issues. Nicolson cautions against definite claims that Homer lived. It is better, he maintains to think of Homer as a poetic tradition rather than as an inspired individual. If there was a Homer, Nicolson reflects, then it was likely that he was "the man who joined, in the way of the poet, things that might otherwise have lived apart ..." These were the vast oral traditions of legends and stories about a great war in the Greek past and a terror-fraught voyage home afterward.

Nicolson's views demand respect. His grasp of Homer is based upon profound insight and an impressive command of academic scholarship. But it is Nicolson's life as a seafarer and globe traveler that gives his voice a commanding authority.

Two current art exhibitions impart a visual context to Why Homer Matters, thus reinforcing the impact of this fine book. Assyria to Iberia at the Dawn of the Classical Age at the Metropolitan Museum of Art in New York (September 22, 2014–January 4, 2015) charts the age of "orientalization" that took place in Greece around the time that  Homer's epics were composed in written form, around 700 BC. Likewise, the newly opened Homer and the Epics Gallery at Boston's Museum of Fine Arts brilliantly complements Nicolson's book by showing how the later Greeks came to depict the Homeric tales in Classical art.

In the opening pages of Why Homer Matters, Nicolson looks at an amazing work of art from antiquity that is the closest "portrait" of Homer that we are likely to ever have.

In 1939, the great American archaeologist, Carl Blegen of the University of Cincinnati, began excavating Pylos in southern Greece. Pylos was the site of the palace of one of the Greek leaders in the Iliad, Nestor, and Blegen was not disappointed. Blegen's team discovered the first examples of Linear B, the earliest form of Greek script, found in Europe, and the remains of a stunning painting, The Lyre Player, amid the wreckage of Nestor's palace. 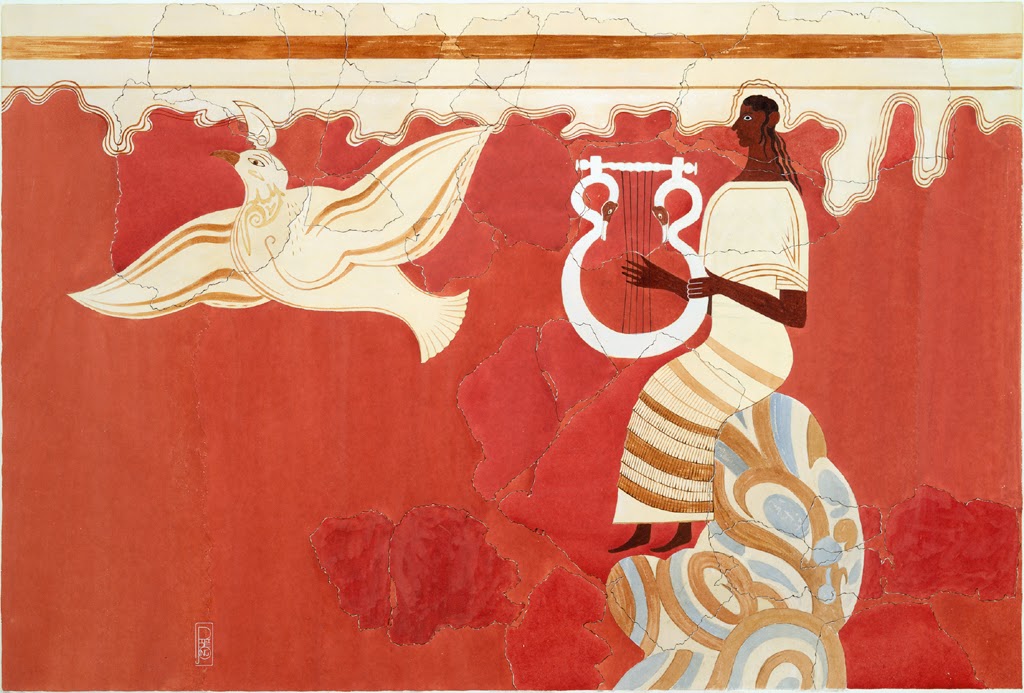 The Lyre Player fresco was found shattered in pieces and later reconstructed by the artist Piet de Jong. This image of a Bronze Age poet with a bird taking wing is one of the most extraordinary representations of poetic expression in the history of art. As a symbol of the imagination in action, this scene, which decorated the throne room or megaron at Pylos, has few equals.

Pylos was one of the great palace-states of Mycenaean Greece. Around 1200 B.C., Pylos, Tiryns and Mycenae all were sacked and burned. The massive fortifications of these early Greek states collapsed before waves of attackers once identified as "Dorian" invaders. The conquering hordes may actually have included insurgent peasants and slaves once held in subjection by the Mycenaean warlords. These armor-clad nobles - Nestor, Agamemnon, Menelaus, Diomedes and the incomparable Achilles - were the protagonists of Homer's Iliad and other tales of the Trojan War which have not survived in written form.

According to tradition - which the Greek historian Thucydides accepted - the Mycenaean strongholds fell to assault eighty years after Troy was put to the sword. It was a well-deserved payback for the swaggering, blood-thirsty Greeks who had torched Troy.

That scenario may be a little too neat. Nicolson has an alternative theory that the Iliad may be traced to stories handed down from perhaps a thousand years earlier. Instead of one war against Troy, Nicolson maintains that the Iliad recalls adventures of the Indo-European ancestors of the Greeks as they migrated over the vast steppe lands of southern Russia and the Ukraine on the journey to their eventual homeland.

Nicolson brilliantly probes the origins of words used by Homer and the ancient Greeks. Thalassa, the word for sea in the Iliad and the Odyssey, is not of Indo-European origin. It is a loan word, possibly from Minoan Crete, whose script, Linear A still has not been deciphered.

The Greeks took verbal control of thalassa as they gained political dominion over the Aegean Sea and surrounding territories. But even after they became master mariners, the Greeks often used words or phrases in seafaring that referred to horses and wandering over the land. Poseidon, the god of the sea, was also the horse god who "climbed into his chariot and drove it across the waves." 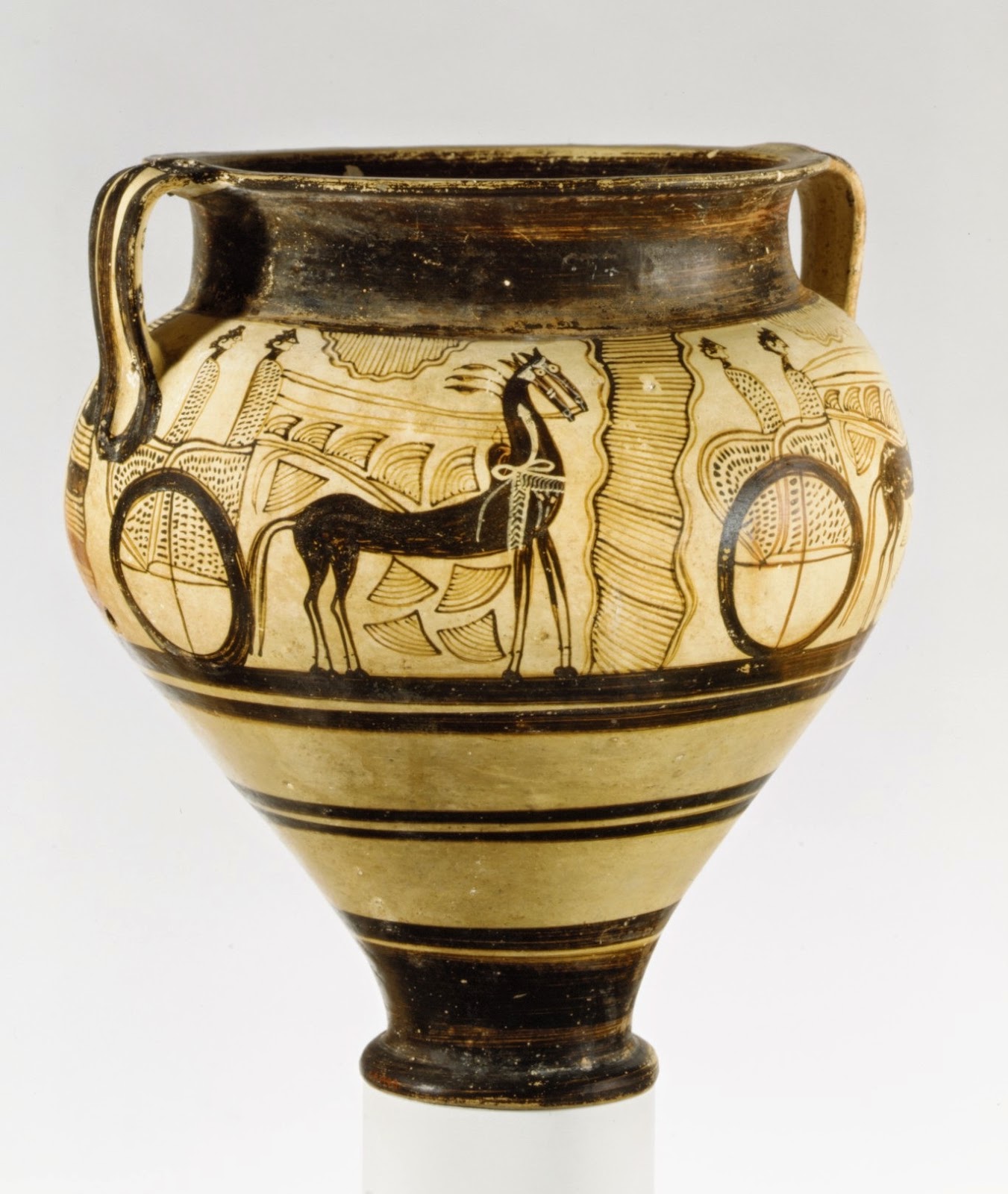 A number of assaults or raids on Troy, between 1800 to 1200 B.C., may have been
conflated in Greek memory to create the legend of a great Trojan War. Troy, the northernmost outpost of the great belt of civilized cities extending from Babylon and Assyria, was an inviting target for the Achaeans. But war begat war and the traditional date of Troy's fall, 1200 B.C., corresponds to the widespread collapse of Bronze Age centers such as Pylos.

When Greek art revived, it was very different from the elegance and beauty of Mycenaean palace art. The Lyre Player lay buried in the rubble of Pylos and a new artistic revolution was in the making.

The Metropolitan Museum of Art displays several monumental terracotta vases or kraters, used to hold the ashes of fallen warriors. These date to the 8th century B.C., from around the time that the text of the Iliad was being composed and the Greek city-states were being formed. 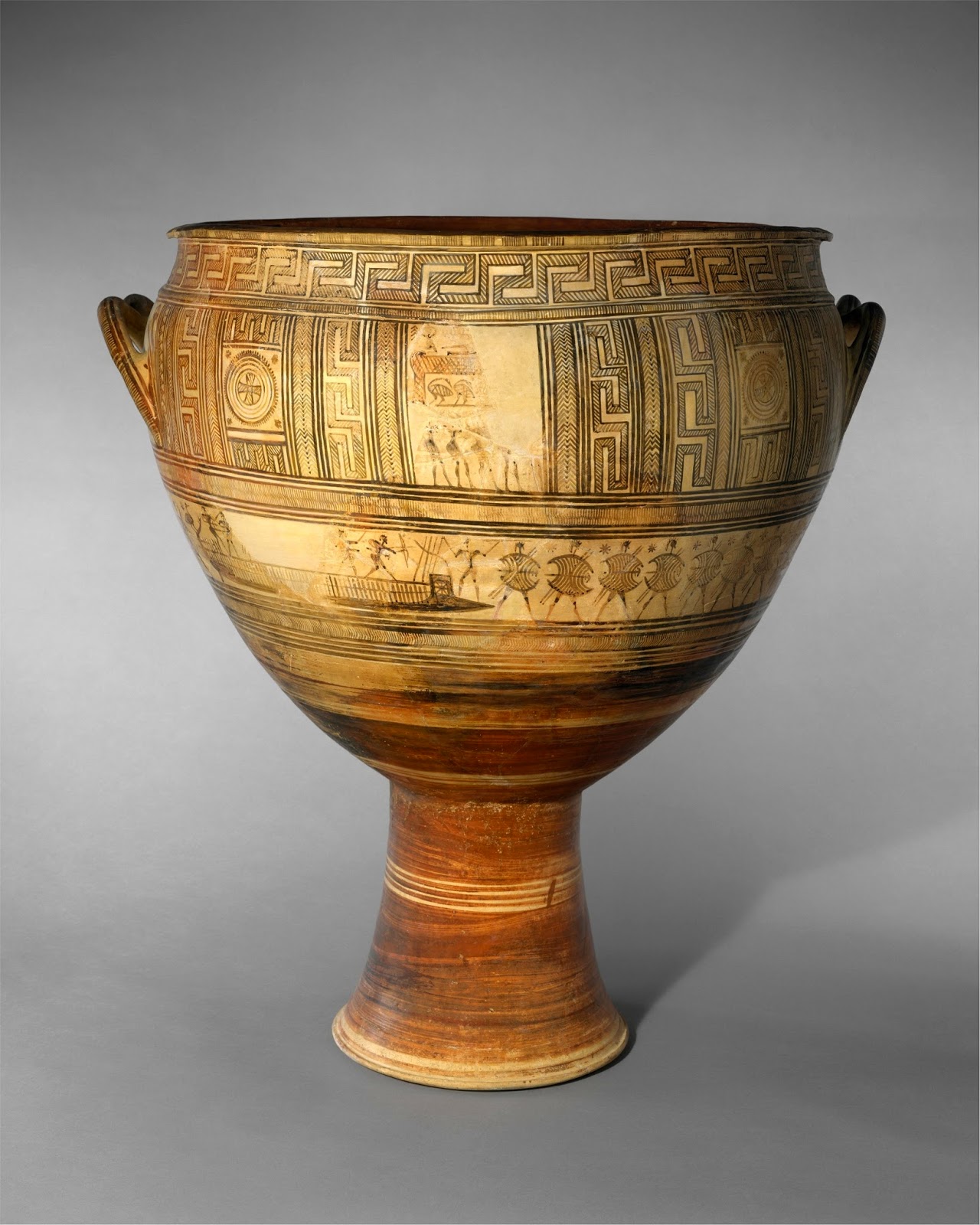 The crude, if vigorous, Geometric style of these kraters raises the fundamental question of how Greek art was able in a few short centuries to evolve the polished Classical elegance on display further on in the Greek and Roman galleries at the Metropolitan Museum and in the Boston Museum's Homer and the Epics Gallery.

An answer may be found in the link between an amazing work in the Homer and the Epics Gallery and a rather inconspicuous piece on loan from the British Museum to the Assyria to Iberia exhibit at the Met. 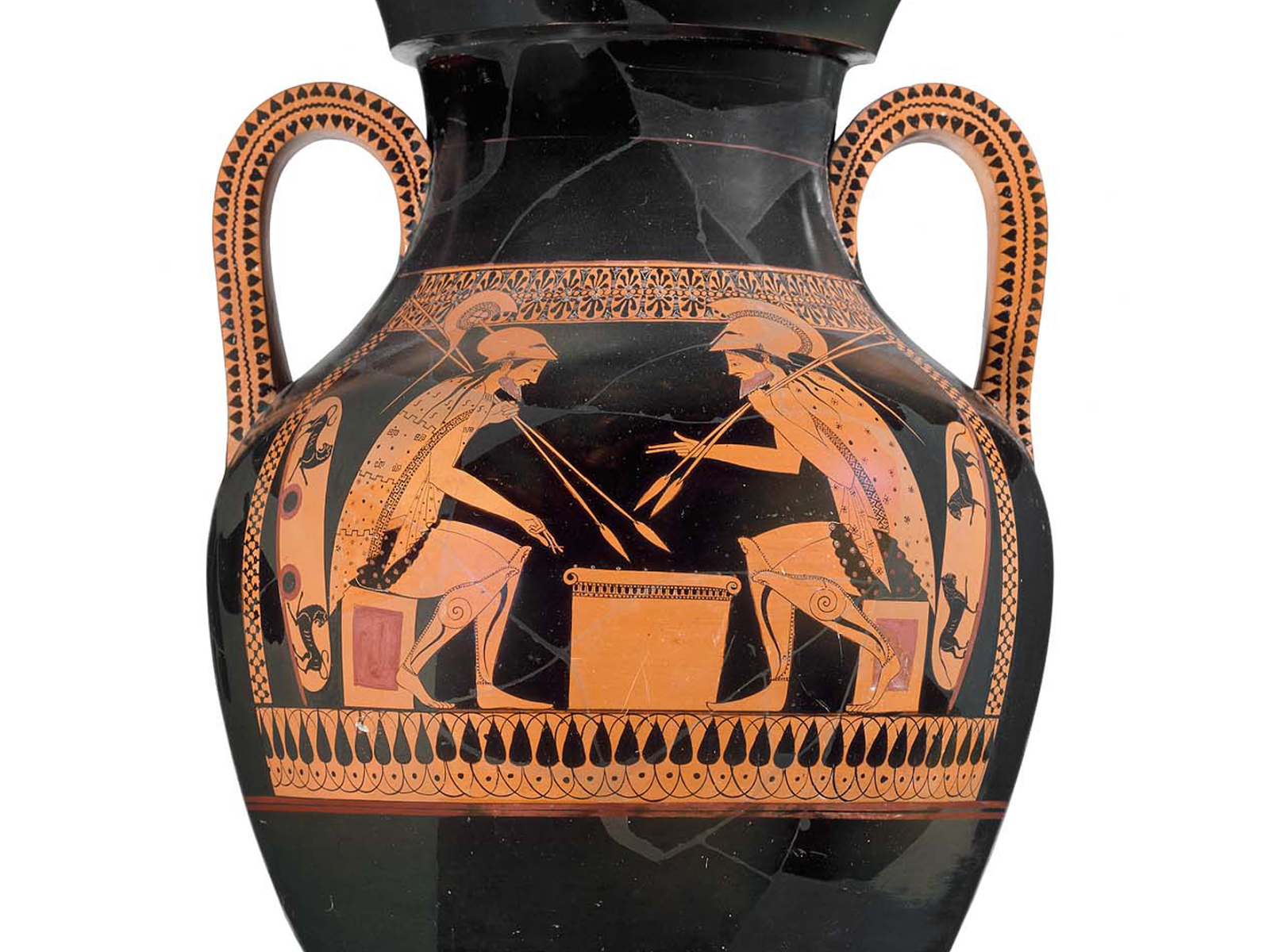 The Two-handled Amphora from Boston shows Ajax and Achilles taking a break from fighting the Trojans. They are playing a board game, which were hugely popular in the Greek, Egyptian and Near-Eastern societies of the Bronze Age and later. This stunning work, dated to 525-520 B.C., shows the same scene on both sides, in Red Figure style by the Andokides Painter, in Black Figure by the Lysippides Painter. This type of transitional work is referred to as "bilingual” vase painting. 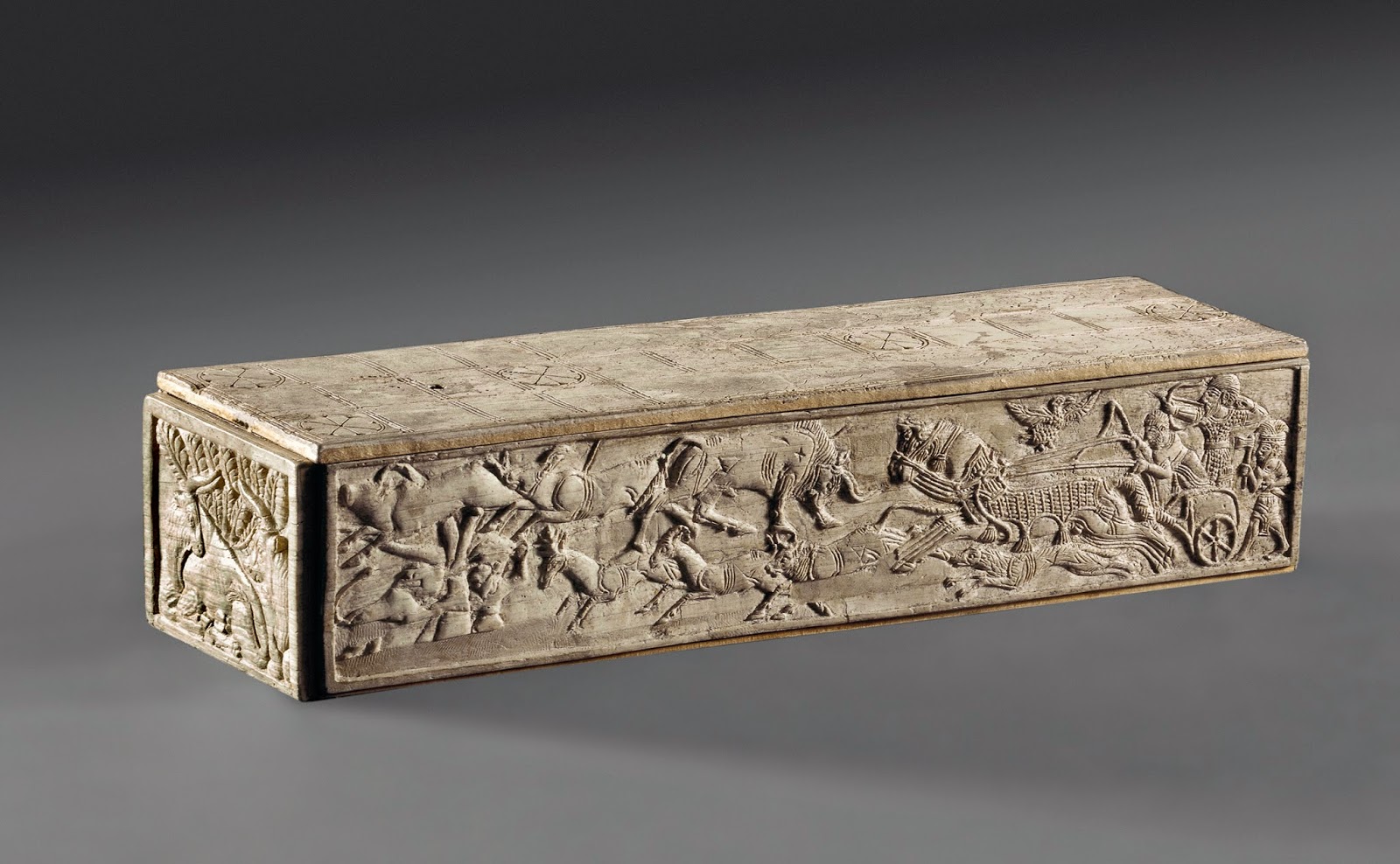 The game that Ajax and Achilles are playing likely came in an elaborately carved ivory container. Phoenician merchants exported luxury goods like this all over the Mediterranean basin. The hunting scene on the  ivory box reworks the vast bas reliefs from Nineveh of Assyrian kings slaughtering prey animals of all descriptions. This brought new levels of realism to Greek art as it turned from the Geometric style to representational art.

Elaborate pieces of metalwork also provided imagery for the growing Homeric cult. Supplied by the Phoenicians, these were often presented to religious shrines like Olympia and Delphi. This gilded silver bowl, found in an Etruscan tomb in Italy, is an example of such a presentation piece. It is decorated in a way that recalls Homer's description of the Shield of Achilles which was emblazoned with scenes of peace and war. 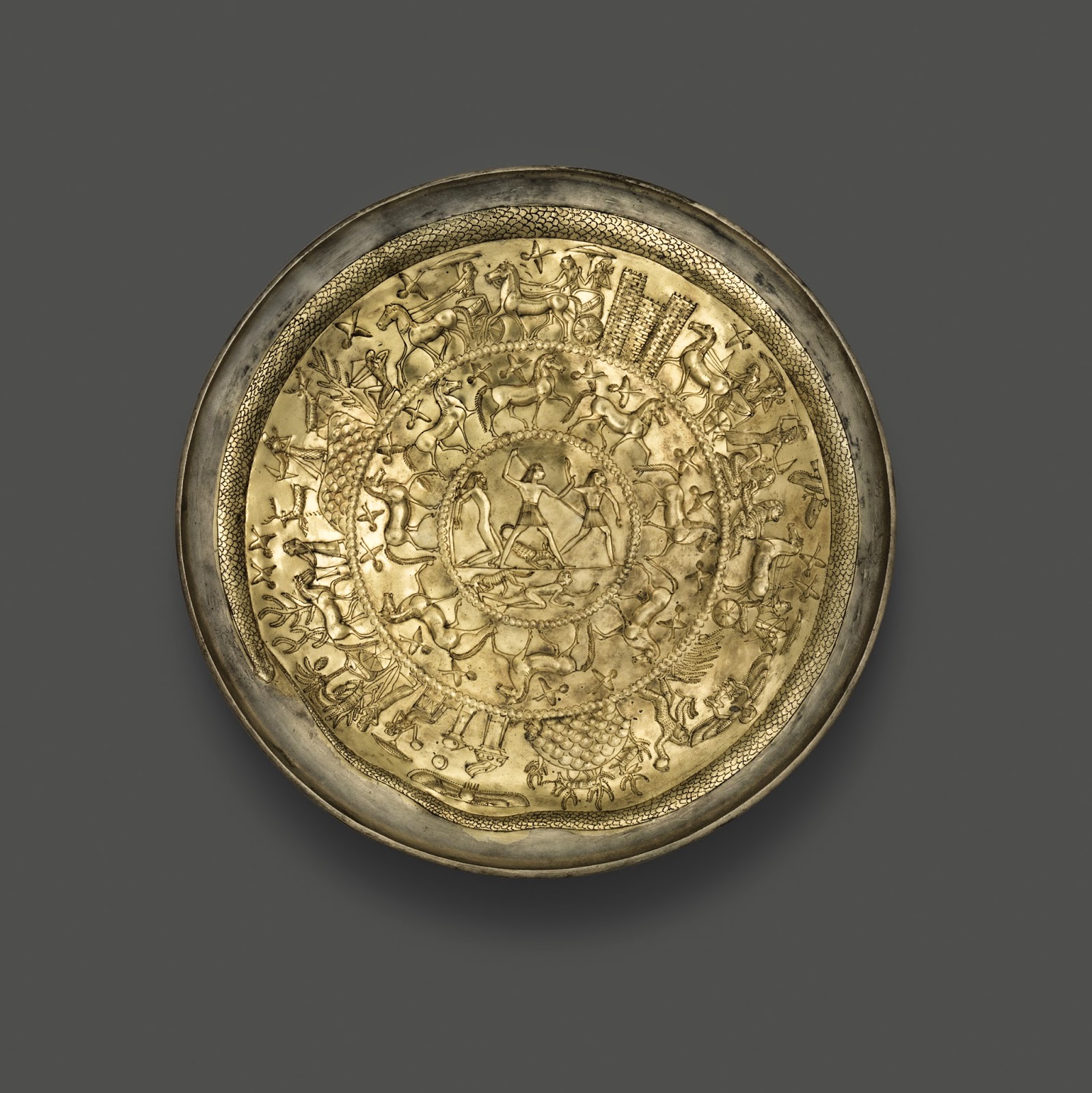 The splendid objects on display in the Assyria to Iberia exhibit show how artistic elements from foreign cultures, particularly from the Middle East, influenced the Greek view of their heroic, Homeric past. But for the Greeks at the turn of the 6th to the 5th centuries B.C., the dawn of the Classical Age, the scenes of peace and war that Homer placed on the shield of Achilles were far more than artistic motifs.

With the Persian Empire threatening Greece in 480 B.C., peace and war were issues of sheer survival. Homer's role in the Greek response to the looming Persian invasion raises perplexing questions. Why did the Iliad and the Odyssey assume a paramount status in Greek culture when these tales confirm almost all of the bad habits that bedeviled the Greeks as they tried to unify to resist Persian aggression?

Nicolson writes insightfully that the Homeric poems were a means to regard and understand the world, not serve as a code for ethical behavior like the Ten Commandments. Nicolson writes:

The Homeric view of the world is essentially traumatic and multiple...The claims of individual triumph can never be reconciled with the claims of communal love and society. We live in the great and eternal war between those principles, Timē and Aretē, honor and virtue, self and other.

Homer, Nicolson concludes "is the great voice of understanding, regarding us all, refusing to decide."

To a very significant degree, Homer's insights for the Greeks were like the Judeo-Christian code of free will. Right and wrong are clearly obvious in the Iliad. The heroes, Greek and Trojan, despite the occasional intervention of the gods, have the power to choose and they usually make very bad choices.

A particularly vivid illustration is on view at the Boston Homer and the Epics Gallery. A mixing bowl or calyx krater made in Athens about 470–460 B.C. shows scenes from the fall of Troy. When stretched out, the dramatic Red Figure depictions by the Altamura Painter represent a virtual panorama of human virtue and vice, heroism and depravity.

Here we see the tragic King Priam watching as his daughter Cassandra is dragged naked to the Greek ships. Priam is about to be killed as his tiny grandson is bludgeoned to death. On the other side of the krater, a heroic Trojan warrior unsheathes his sword to fight a rear-guard action enabling Aeneas to carry his aged father to safety.

The Altamura krater was made in Athens ten years after the Persian invasion was repulsed. The poignancy of the scenes may reflect the suffering to which the Greek people were briefly exposed before the victories of Salamis and Plataea prevented a repetition of such horrors on a wide scale. Yet, the Athenians themselves were to visit this terrible fate on fellow Greeks on the island of Melos in 415 B.C. because they favored Athens' enemy, Sparta.

Everyone involved in this infamous episode was well-acquainted with Homer. Yet the men and boys of Melos were slaughtered and the women and girls were enslaved. This deed was committed by the troops of democratic, enlightened Athens.

If Homer's influence was unavailing on Melos in 415 B.C., can we really concur with Nicolson that the Iliad and Odyssey still matter today?

Today, as the nations of the world still plot and maneuver for dominance, these questions are pressing ones. Seen in this light, we cannot but agree with Adam Nicolson that properly understood, Homer imparts "the ability to regard all aspects of life with clarity, equanimity and sympathy, with a loving heart and an unclouded eye."

Images Courtesy of the Department of Classics, University of Cincinnati, the Metropolitan Museum of Art, New York City and the Museum of Fine Arts, Boston MA.

The Lyre Player, Fresco from Late Bronze Age, excavated by Dr. Carl Blegen and recreated in watercolor by Piet de Jong.  Presented as Plate 126 43H6 in The Palace of Nestor at Pylos in Western Messenia II: The Frescoes by Mabel L. Lang, 1969. Courtesy of The Department of Classics, University of Cincinnati.