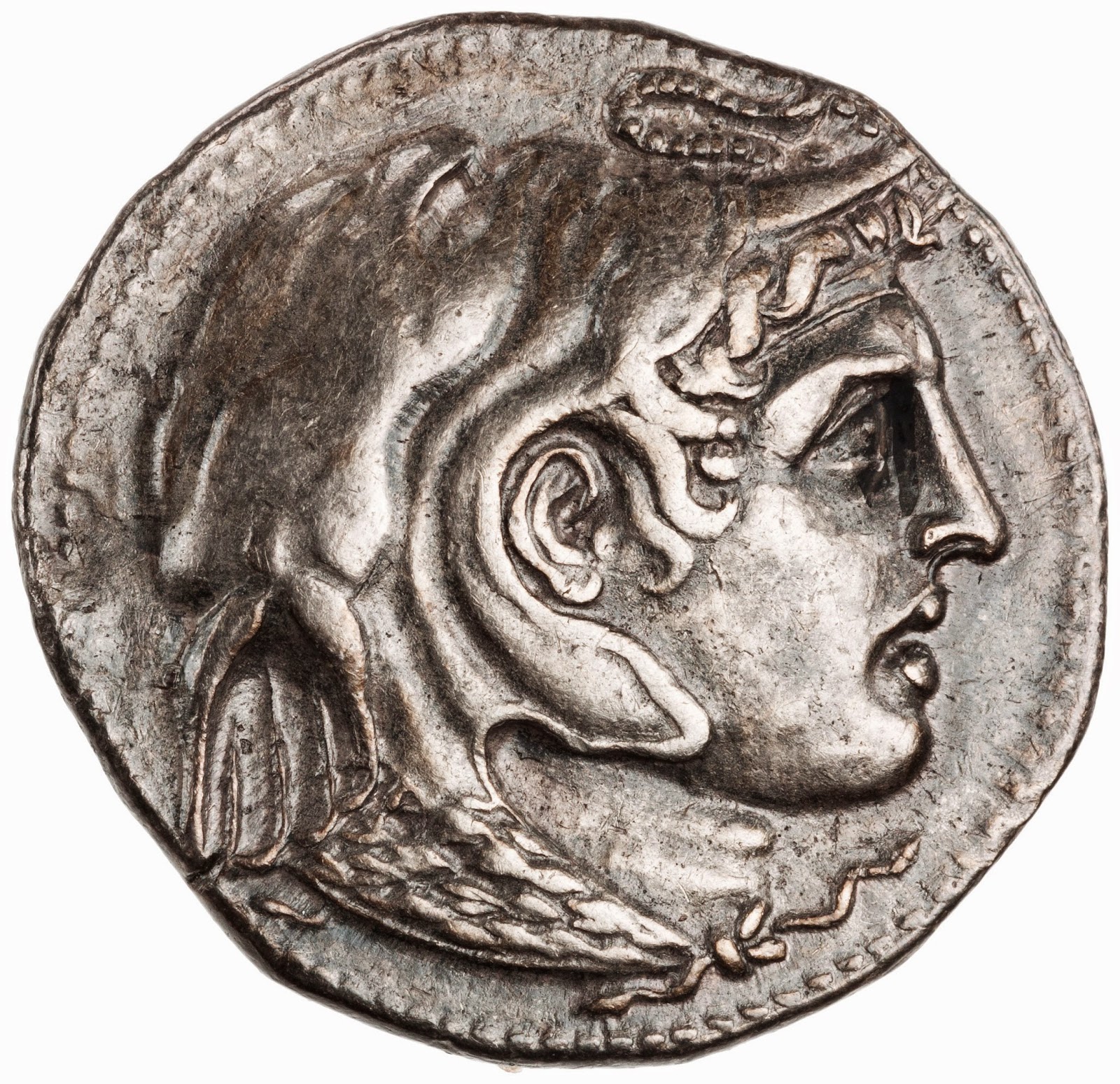 When the Greeks Ruled Egypt: Alexander the Great to Cleopatra

As Alexander the Great lay dying in Babylon in 323 BC, he was asked to whom he would bequeath his vast empire. Legend has it that Alexander gasped in reply, "To the strongest."

Alexander's senior generals, known to history as the Diadochi or "successors," began to squabble over who should get what province to rule. Before long, they were at each other’s throats like Mafia capos after the death of the Don.

This bloodstained chapter in ancient history forms the political backdrop to a splendid exhibition at the Institute for the Study of the Ancient World (ISAW) of New York University. When the Greeks Ruled Egypt charts the social, cultural and religious aspects of Ptolemaic Egypt, the most enduring state to emerge from the chaos following Alexander's death.

One of Alexander's junior lieutenants, Ptolemaios or Ptolemy, survived the ensuing bloodbath. Ptolemy was not "the strongest" of the Diadochi. But he was the smartest. Ptolemy took control of Egypt, the most easily defended province. Ptolemy also seized custody of Alexander's body which he installed in an elaborate sarcophagus. Ptolemy's rule as Alexander's heir was solidified in 305 B.C., when he nominated himself as king. His dynasty continued to rule Egypt for an amazing three centuries.

The longevity of Ptolemy's dynasty in Egypt derived from a delicate balancing act which is very evident from the 150 objects on view in the ISAW exhibit.

After assuming power, Ptolemy and his successors embraced the traditional culture of Egypt. In particular, they celebrated the ancient cult of Isis, Osiris and Horus,  soon known by his Greek name, Harpocrates. At the same time, the Greek philosophical and scientific initiatives which Alexander had championed were given pride of place in the Ptolemaic political agenda.

The ISAW exhibit focuses almost exclusively on Egypt, but the insights it shares helps promote a general understanding of the post-Alexander Hellenistic period. So much attention has been lavished on fifth century B.C. Athens and on the extraordinary career of Alexander that the Hellenistic age often gets only a cursory "look-see" in history text books.

The late Michael Grant was one historian who examined the Hellenistic Age in detail. It is worth quoting his 1982 book, From Alexander to Cleopatra, on the psychological foundations of that period:

To promote creative endeavor among the native Egyptian population and the growing Greek immigrant population in Egypt, Ptolemy and his successors had to square the circle of two very different sets of artistic standards. 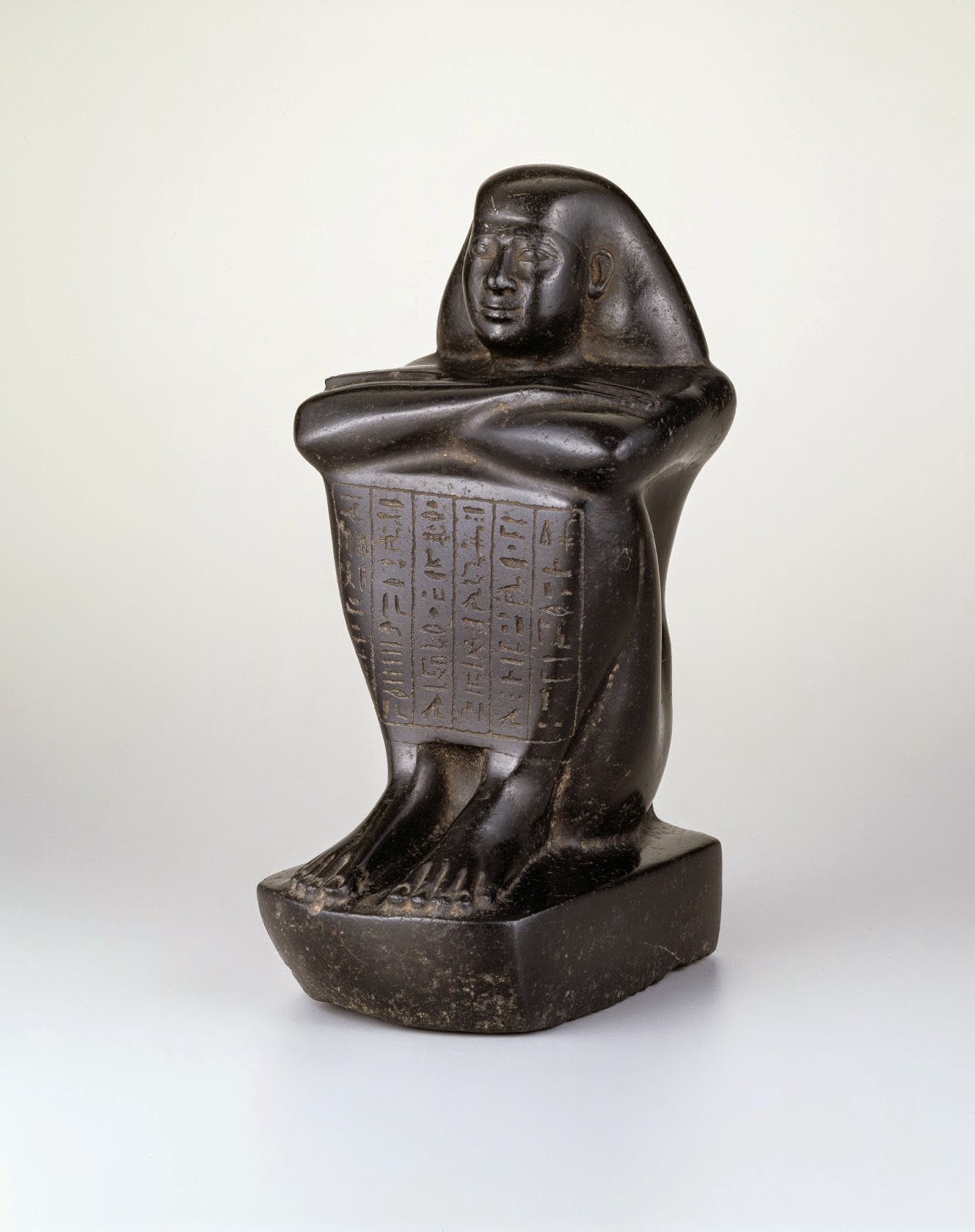 Egyptian art was founded upon idealized forms, codified and sanctified by practice dating back to the Old Kingdom two thousand years before. Consummate craftsmanship combined with a determined adherence to tradition. The result was an art both static and spiritually moving. 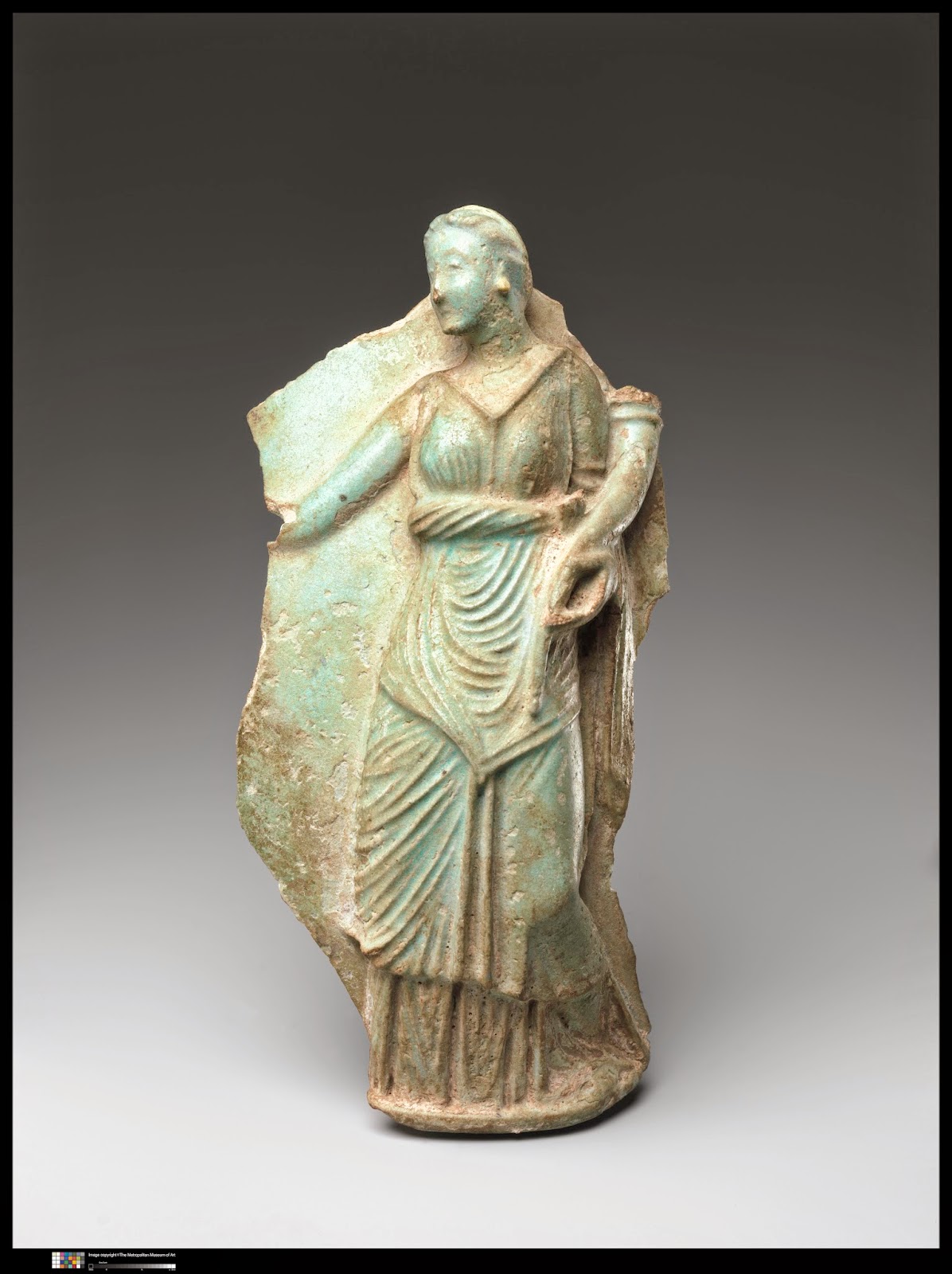 The emerging Greek school, on the other hand, was busily delineating individual character traits into portraits of gods and men. From the Hellespont to Afghanistan, a revolutionary art brimming with human vitality followed in the footsteps of Alexander's phalanx.
In Egypt, as Ptolemy I secured his power base, tradition and realism found the means to co-exist - and flourish.

A superb example of the handling of "eternal" themes by Egyptian artists is the head of a priest named Wesirwer which means "Osiris Is Great." It dates to a point between 380 to 342 B.C., before Alexander had ousted the Persians from control of Egypt. 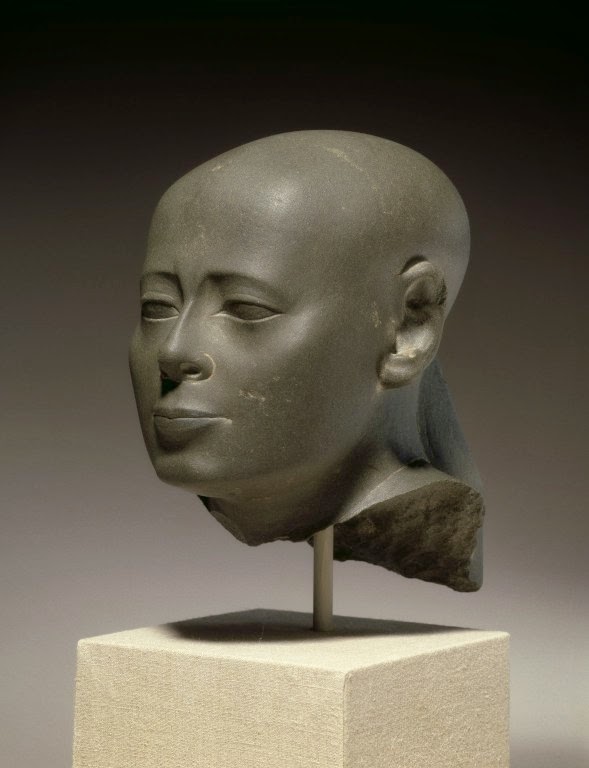 
This head of Wesirwer was sculpted from schist, a stone which the Egyptians had been using in masterful fashion for millennia. Despite the glimmer of human familiarity in his almond-shaped eyes, Wesirwer might well have been the subject of the sculptor of the alien beauty of the Amarna princesses, dating to 1353 to 1336 B.C.

When we look at Wesirwer, we never for an instant think that he will open his pursed lips and speak - except perhaps with the "voices of silence" worthy of André Malraux.

That's not the case of the regal and imposing Head of a Ptolemaic Queen, from the collection of the Metropolitan Museum of Art. This work is thought to be a portrait of Arsinoë II, daughter of Ptolemey I and later Queen of Egypt from 278 B.C. to 270 B.C. Despite the goddess-like demeanor of this marble likeness, we immediately sense a powerful personality, that of a charismatic, capable woman who lived in an age which gave Greek women a role in power politics for the first time. 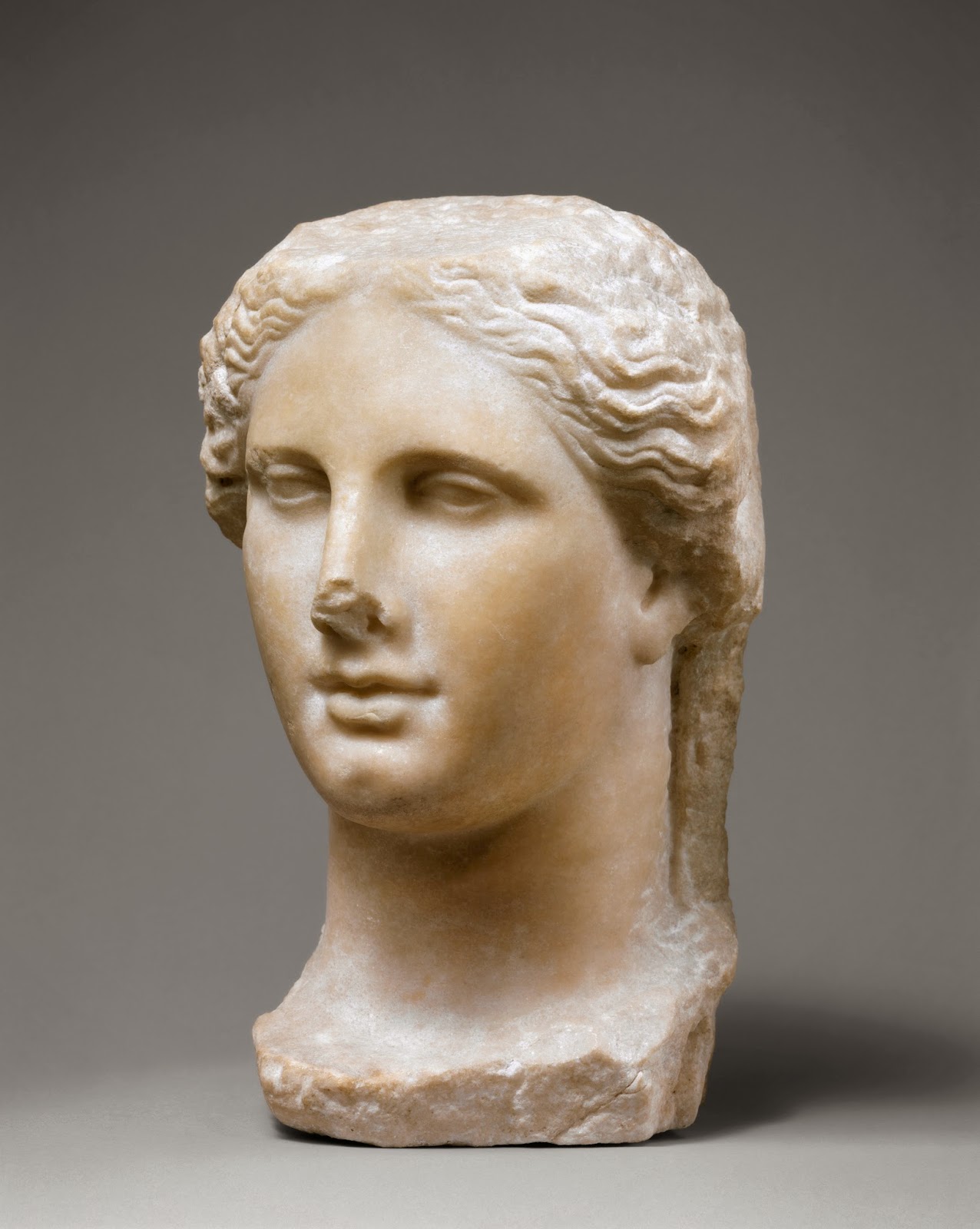 Head of a Ptolemaic Queen is certainly an idealized, reverential portrait. The flattened crown of the head is thought to have been covered with a veil made from stucco. A much less flattering likeness of Arsinoë II appears in a fragment of a faience vase, also in the Metropolitan collection, and it shows a very formidable character, indeed. 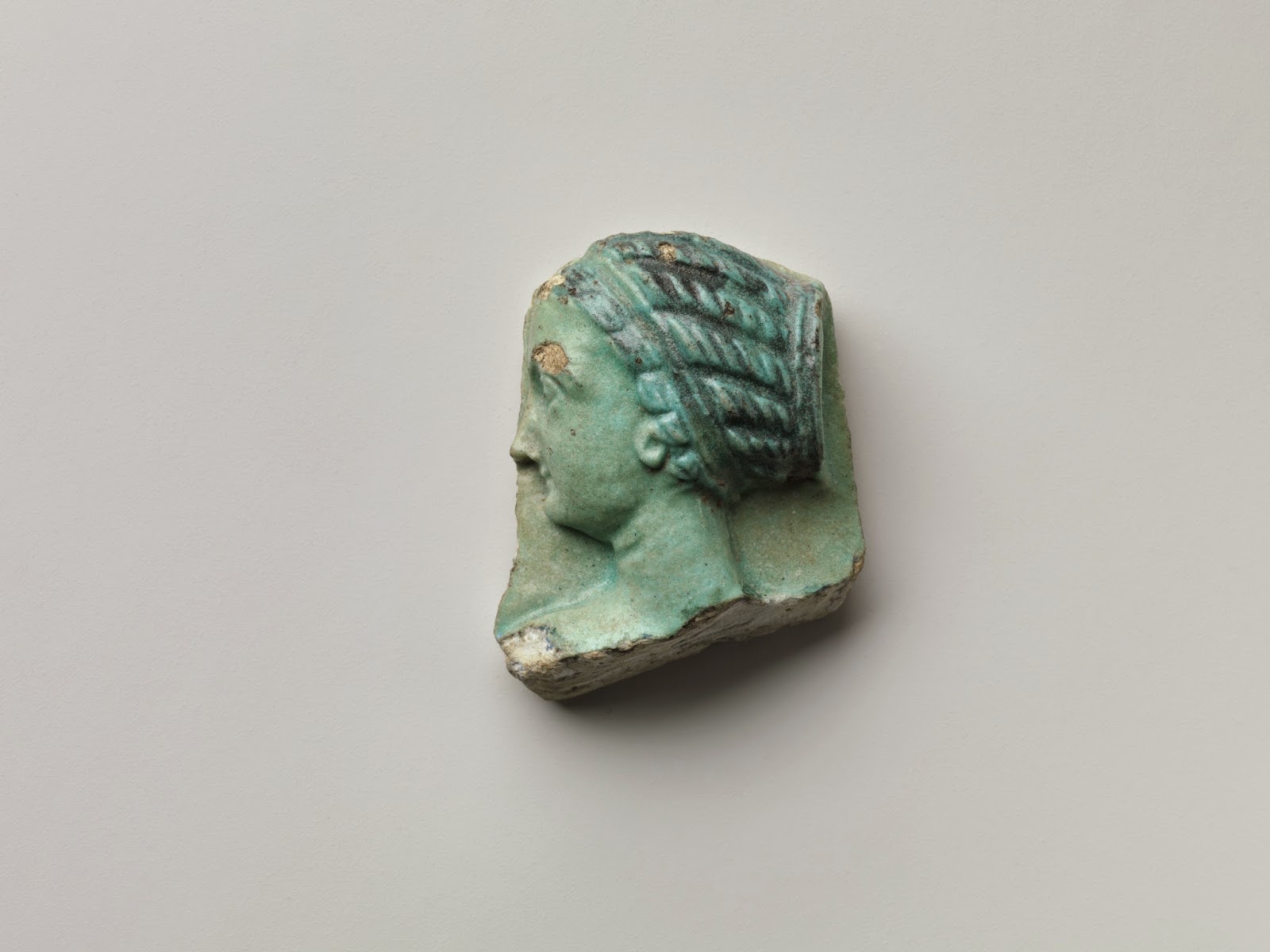 
Arsinoë II was noteworthy - or notorious - for being the royal consort of her brother, Ptolemy II.  As bizarre as this might sound, Arsinoë had earlier married a half-brother, Ptolemy Kerauno, after her first husband, King Lysimachus of Macedonia, was killed in battle. But Arsinoë began to plot against Ptolemy Kerauno and barely escaped with her life. Two of her sons were not so lucky.  When she reached Egypt, Arsinoë put some cold steel into the statecraft of her second brother-husband, helping Ptolemy II to build an impressive battle fleet and beat off an enemy attack.

When Arsinoë II died, Ptolemy II deified his sister-wife and a vigorous religious cult arose. Arsinoë II was worshipped as a goddess in Egypt, by the Egyptians as a counterpart of Isis and by the Greeks as a new Hera or Demeter. In this way, the Ptolemaic regime found common ground for Egyptians and Greeks, alike.

Other significant ethnic minorities needed to be accommodated as well, especially the Jewish immigrants who settled in the newly established city of Alexandria. The ISAW exhibit devotes one of its two galleries to showing how three languages, Egyptian demotic, Greek and Aramaic were written and spoken in Ptolemaic Egypt. This was a multi-ethnic, multi-lingual society which despite some strain and occasional discord was remarkably successful in giving opportunity to citizens of different racial origins.

Ptolemy I and his successors, each of whom was also named Ptolemy, were immortalized by portraits in the tradition of the great pharaohs of Egypt's distant past. But one of the Greek innovations to Egypt - coinage - provided the Ptolemaic regime with a way impress its image on Greek and Egyptian subjects alike.

Greek coins, unlike the serene uniformity of early Egyptian portraiture, exuded individuality. We can see this, beginning with a coin minted in Alexandria in 310 B.C., five years before Ptolemy promoted himself from governor of Egypt to its king. The silver tetradrachm presents a lifelike portrait of Alexander the Great. Alexander’s intense "war face" is contrasted by the heroic, elephant head piece he wears, symbolizing his conquests in the Indian subcontinent.

Such realistic character studies of the Greek rulers of Egypt continued to be issued down to the last and most famous of the Ptolemies, Cleopatra VII.

The coins of the Ptolemaic dynasty literally profile the "warts and all" looks of its members. Ptolemy I had a distinctive long, hooked nose. A gold octadracm minted around 260 B.C. by his successor, Ptolemy II, showed his sister-wife, Arsinoë II, next to him on one side of the coin; his father, Ptolemy I, appears alongside his queen, Berenice, on the other. The trademark hooked nose is very much in evidence on the portrait of Ptolemy I. 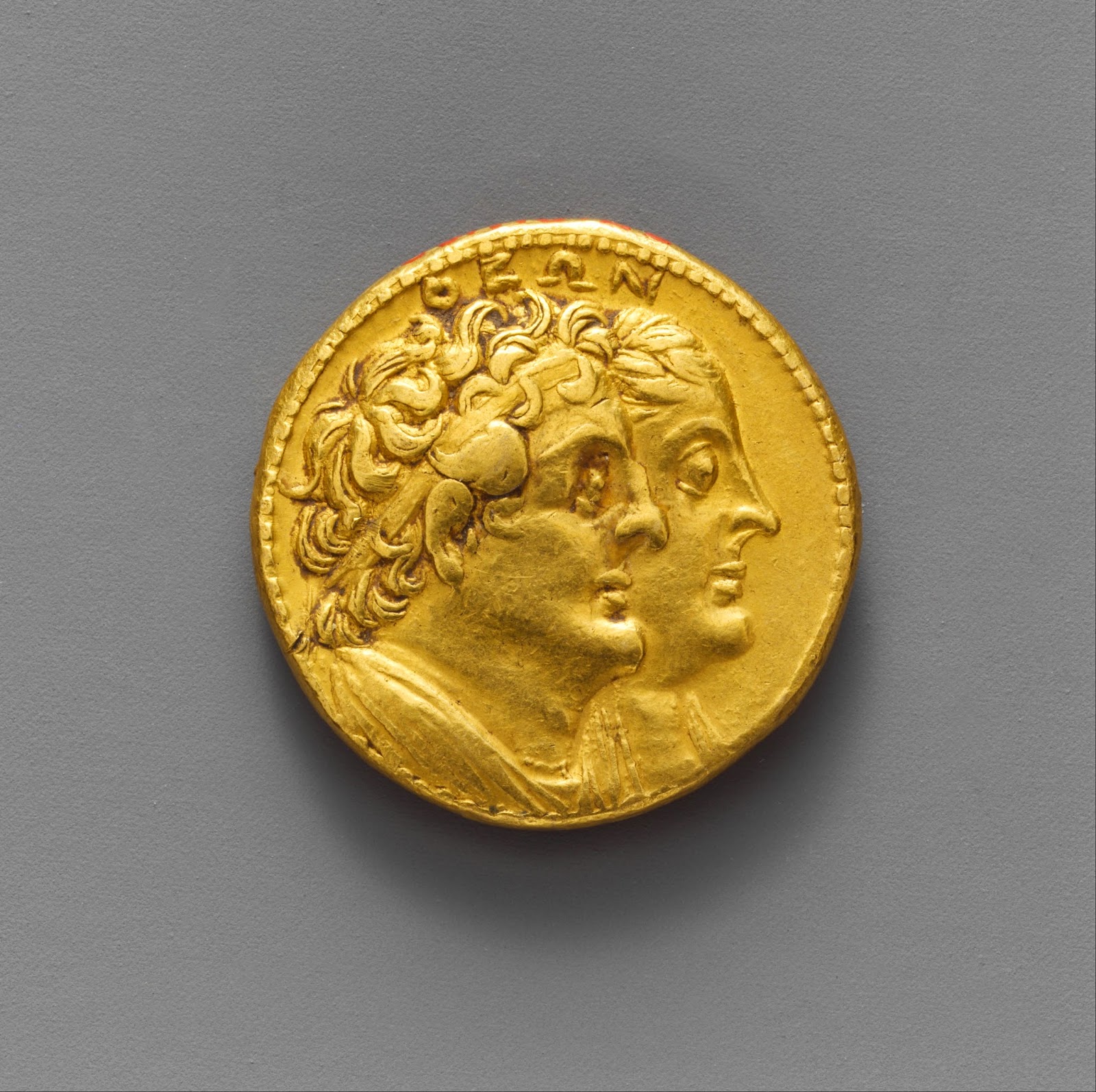 Octadrachm of Ptolemy III Euergetes,  ca. 246–221 B.C.
A similar octadracm was issued by Ptolemy I's grandson, presenting the matched heads of his parents and grandparents (shown here, though it does not appear in the ISAW exhibit). It was a touching tribute by Ptolemy III Euergetes, who was a very capable ruler himself, with many of his grandfather's talents - though not a hooked nose.

However, this genetic quirk was bequeathed to a number of the other descendants of Ptolemy I, most famously to Cleopatra VII. Some coins and portraits of Cleopatra tried to minimize this unseemly blemish. The truth, however, cannot be disguised. Cleopatra VII was no Vivian Leigh or Elizabeth Taylor!

Cleopatra, however, inherited more than a hooked nose. From the gutsy Arsinoë II and the other remarkable women of the Hellenistic era, Cleopatra shared a tigress temperament to defend her own. Everyone knows about the feminine "wiles" of Cleopatra, which she used to entice Mark Antony. But Cleopatra was a savvy diplomat and a true Egyptian patriot. Despite the embrace of Egyptian customs by the earlier Ptolemies, Cleopatra was the first member of the dynasty to learn to speak the native Egyptian language.

In the end, the juggernaut of Octavian Caesar's legions crushed Cleopatra's bid to keep Egypt independent. One thinks that had Arsinoë II lived in 31 B.C. rather than two and a half centuries earlier, she would have fared no better against ruthless Rome.

The ISAW exhibit is brilliantly curated and, given its free admission, is one of the best buys in New York City. Located two short blocks from the Metropolitan Museum of Art, this insightful look at Egypt under the Ptolemaic dynasty can easily be combined with visits to the Met's Egyptian and Greek and Roman galleries. The exhibit is entering its final weeks.

When the Greeks ruled Egypt reminds us that conquerors may come to Egypt, but they always go. The Ptolemies were more sensible and adaptable to native custom than most, which was one reason they lasted as long as they did. But this wonderful exhibit has one undeniable lesson to teach. Eternal Egypt always outlasts the revolving door despots who would rule it, in ancient times or modern.

Text: Copyright of Ed Voves, all rights reserved
Images Courtesy of the Institute for the Study of the Ancient World of New York University and the  Metropolitan Museum of Art

Posted by Art Eyewitness at 8:12 AM