Art Eyewitness Looks at The Art Scene in 2014

It is encouraging to reflect upon the art scene in 2014. Some of the concerns raised at the end of 2013 have been answered in very positive and encouraging ways.

The demands of the Marketplace did not inhibit the mission of art museums to preserve and present classic  art while fostering new visions of creative expression. Bad money did not drive out good art - so far.

I picked a couple of images to symbolize the art scene during 2014. I chose Wall Street, New York, a 1915 photo by Paul Strand, whose tremendous range as a photographer was celebrated by a huge exhibition at the Philadelphia Museum of Art. My second choice was Returning Home, by the Chinese artist, Shitao (1642-1707), displayed in an equally vast exhibit at New York's Metropolitan Museum. The Art of the Chinese Album remains on view through March 29, 2015.

The two pictures show the ying yang of the art world. Art as reality. Art as refuge. We need  both. 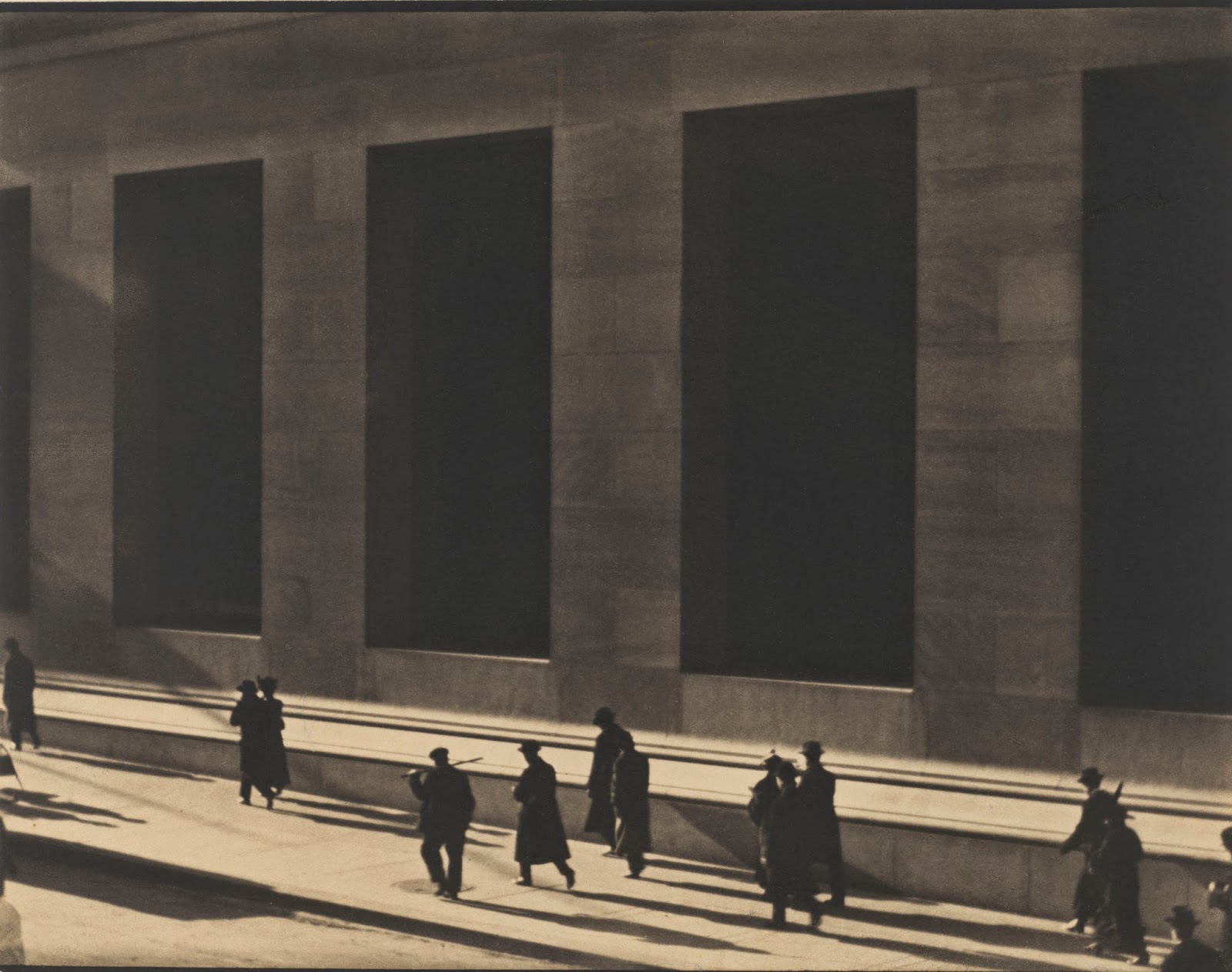 Strand's platinum print of people hurrying to work past the J.P. Morgan building in New York City shows the "rat race" world that most of us inhabit or feel we do.  The pedestrians in Wall Street are dwarfed by the huge, darkened windows of the Morgan building. The windows loom over them like monstrous examples of Kazimir Malevich’s 1915 painting, Black Square.

Shitao's depiction of a solitary boatman navigating his way homeward is equally evocative. Shitao (1642-1707) was one of the group of artists known Ming Loyalists because of their continued support for the Ming Dynasty after it fell from power in 1644. Less complimentary was the other name of this group, yimin or "left-over" subjects. 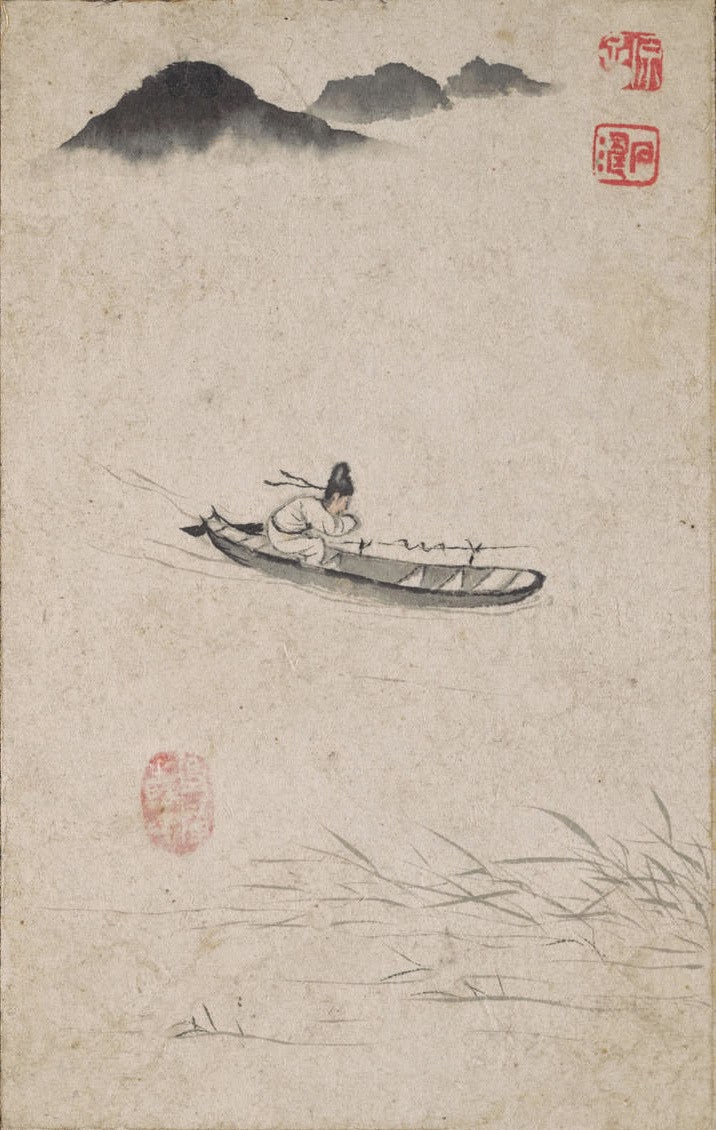 The boatman is almost certainly intended as an autobiographical image of Shitao. He had courted favor with the conquering Qing Dynasty from Manchuria, but then gave up in disgust. Shitao returned to creating images in the traditional style of Chinese art.

Landscape painting in China, of which Shitao was a master, stressed idealized depictions of the countryside. Yet Shitao was not creating a fantasy world.

Returning Home is one of twelve images in a 1695 album by Shitao. Expansive landscapes alternate with  realistic“close-ups" of a single tree branch or a small bed of flowers in this carefully preserved book of images. Shitao's boatman is trying to escape the oppression of the soulless "grind" of existence as presented in Strand's Wall Street, but his refuge is still very much in the real world.

Art as window of reality and as a site of refuge scored a major triumph during 2014. The Detroit Institute of Art was "given up for dead" in the final months of 2013. Many of its greatest works were slated for the auction block to help bail-out bankrupt Detroit.

This suicidal sale of the treasures of the Detroit Institute of Art (DIA) did not take place.

Thanks to an ambitious fundraising effort spearheaded by the DIA itself, the integrity of the museum's collection was preserved and Detroit's financial hemorrhage was "stitched in time." A staggering $800 million was raised by the DIA, including $330 million from the Ford Foundation, the Knight Foundation and seven other philanthropic institutions.

Darren Walker, President of the Ford Foundation, was quoted in the New York Times, stating that the DIA-lead rescue of Detroit was “unprecedented and monumental for philanthropies to undertake this kind of initiative.”

Mr. Walker concluded that “if there was ever a time when philanthropy should step up, this is it.” 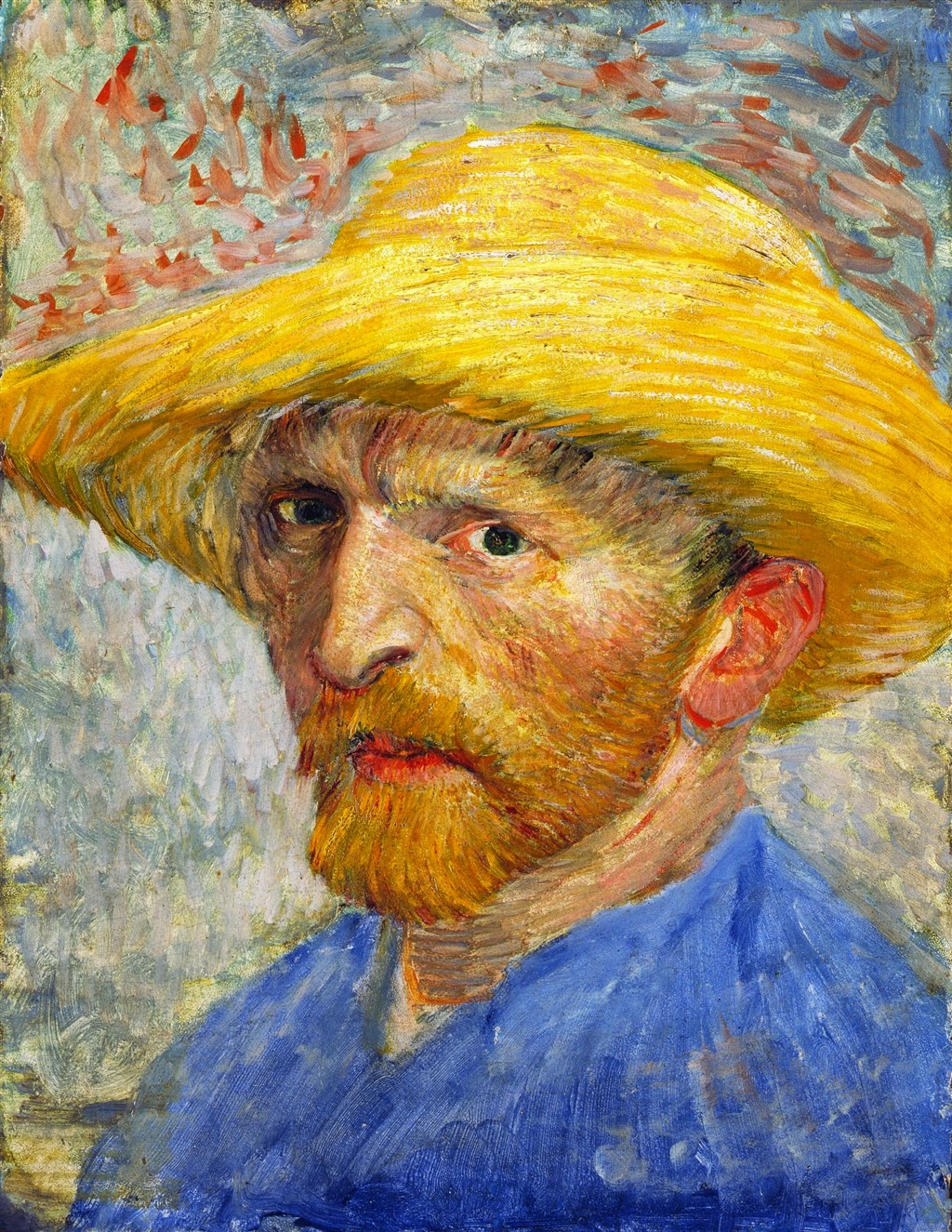 By stepping-up, the DIA prevented a precedent-setting auction of Van Gogh's straw-hatted Self Portrait and other iconic works. This "monumental" success saved other American museums from facing the same grim prospect every time the credit rating of their city takes a hit.

The Detroit institute of Art's triumph was counterbalanced by the Delaware Art Museum's travail. The Delaware Museum sold two extremely valuable art works to help dig itself out of massive debt incurred by its renovation plans undertaken back in 2001 to a tune of $32.5 million. That was before 9/11 and the 2007-2008 financial debacle. In response to the  auctioning of the two art pieces, the Delaware Art Museum’s accredited status was suspended by the American Alliance of Museums for “direct violation of museum standards and ethics.”

Art institutions, by the standards of the American Alliance of Museums, are only permitted to sell works of art to finance the purchase of new ones. But U.S. museums constantly engage in renovation and expansion of their buildings to stay competitive. Those with deep pockets like the Metropolitan Museum and MOMA usually can ride out financial down-turns. But smaller institutions have shallow pockets. The ominous threat of Stand's Wall Street affects them too.

Having its accreditation suspended means that the Delaware Art Museum is barred from participating in special exhibitions. Could not the American Alliance of Museums have arranged several exhibitions to help fund the debt payments of the Delaware Art Museum?
That is particularly worthy of consideration because 2014 proved to be a very good year for special exhibitions. These displays are a type of secular liturgy where persons of good heart can join together to celebrate the shared genius of humankind. Why not use them to help museums in need or for other worthy social causes?

In terms of big, inspirational exhibits during 2014, I feel compelled to give first prize to the Metropolitan Museum’s Lost Kingdoms: Hindu-Buddhist Sculpture of Early Southeast Asia, 5th to 8th Century. 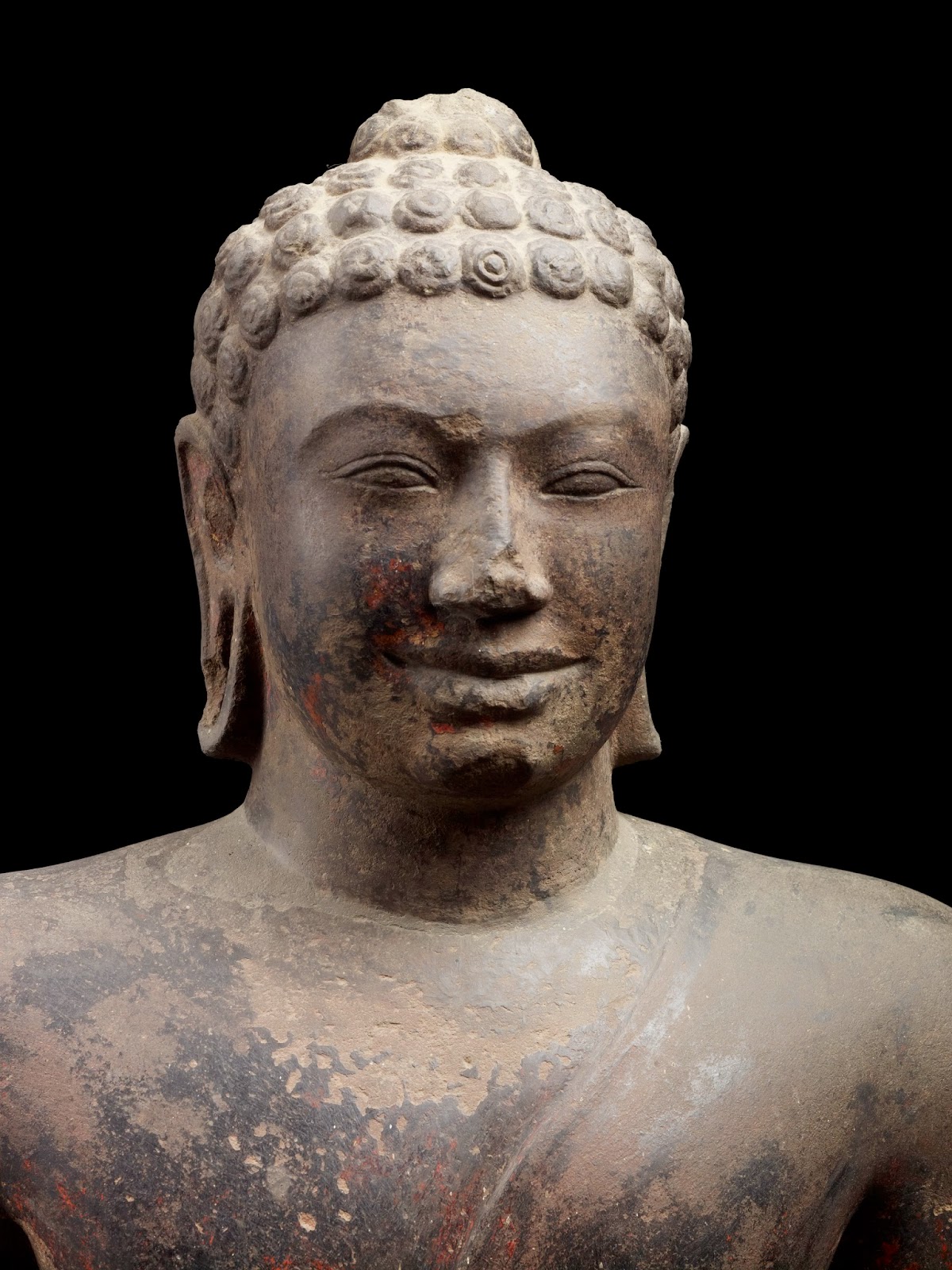 Lost Kingdoms was curated by John Guy, one of the greatest scholars of Asian art alive today. This profoundly moving exhibition displayed 160 sculptures from museums in Cambodia, Vietnam, Thailand, Malaysia, Singapore, and Myanmar, as well as Europe and the U.S. These Buddhist and Hindu sculptures evoked such a degree of spirituality in the Metropolitan’s galleries that the exhibition seemed more of a religious event than a display of art.

Lost Kingdoms and another magnificent exhibition of Asian art, Treasures from Korea: Arts and Culture of the Joseon Dynasty, 1392-1910, also underscore the role of special exhibits in promoting new insights into art history.

A lot of art has not made it into the textbooks. Frequently, the achievements of small or remotely located nations are overshadowed by those of neighboring empires.  Korea is a perfect illustration of this theme. 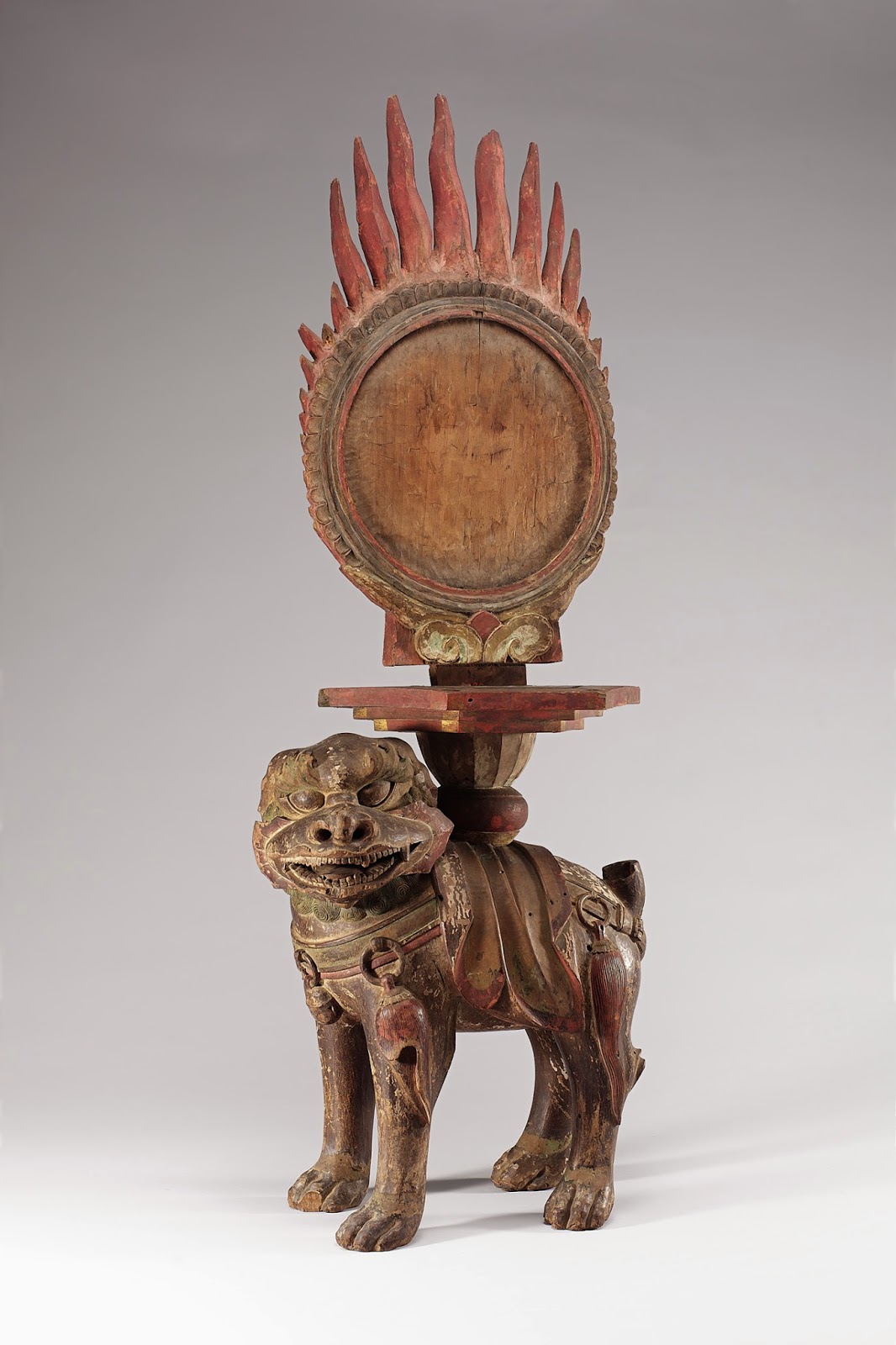 Treasures from Korea premiered in Philadelphia in the spring of 2014 before traveling to Los Angeles and Houston. The exhibit shows that Korea served as much more than a cultural bridge between China and Japan. It also developed its own distinctive art forms, most of which reflected the creative tension between the Confucian ethos of the Joseon court and the Buddhist religion of the people.

Two other major international exhibitions scored huge successes during 2014. The themes of Henri Matisse: The Cut-Outs and Rembrandt: the Late Works took Old Master art to a new dimension. The elderly Matisse and Rembrandt created some of their greatest works while coping with the physical and financial adversities old age.

I was struck by a photo of Matisse in the exhibit (now at MOMA until February 10) cutting out strips of colored paper for one of his collages. Look at the trance-like intensity in Matisse's eyes and compare that with the inward focus of An Old Woman Reading, painted by Rembrandt in 1655.  In both cases, you can see the torch of art being kindled for the coming generations. 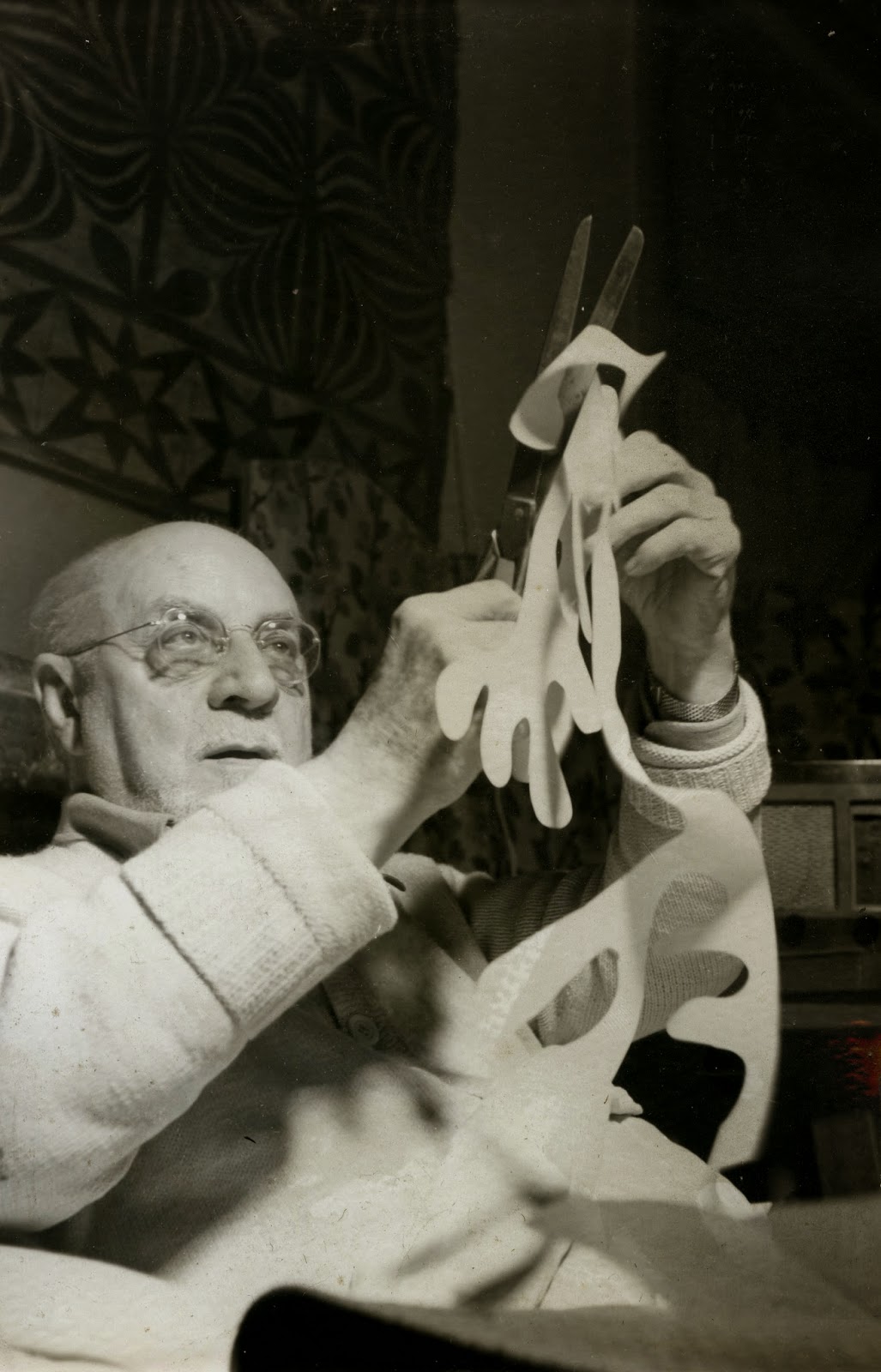 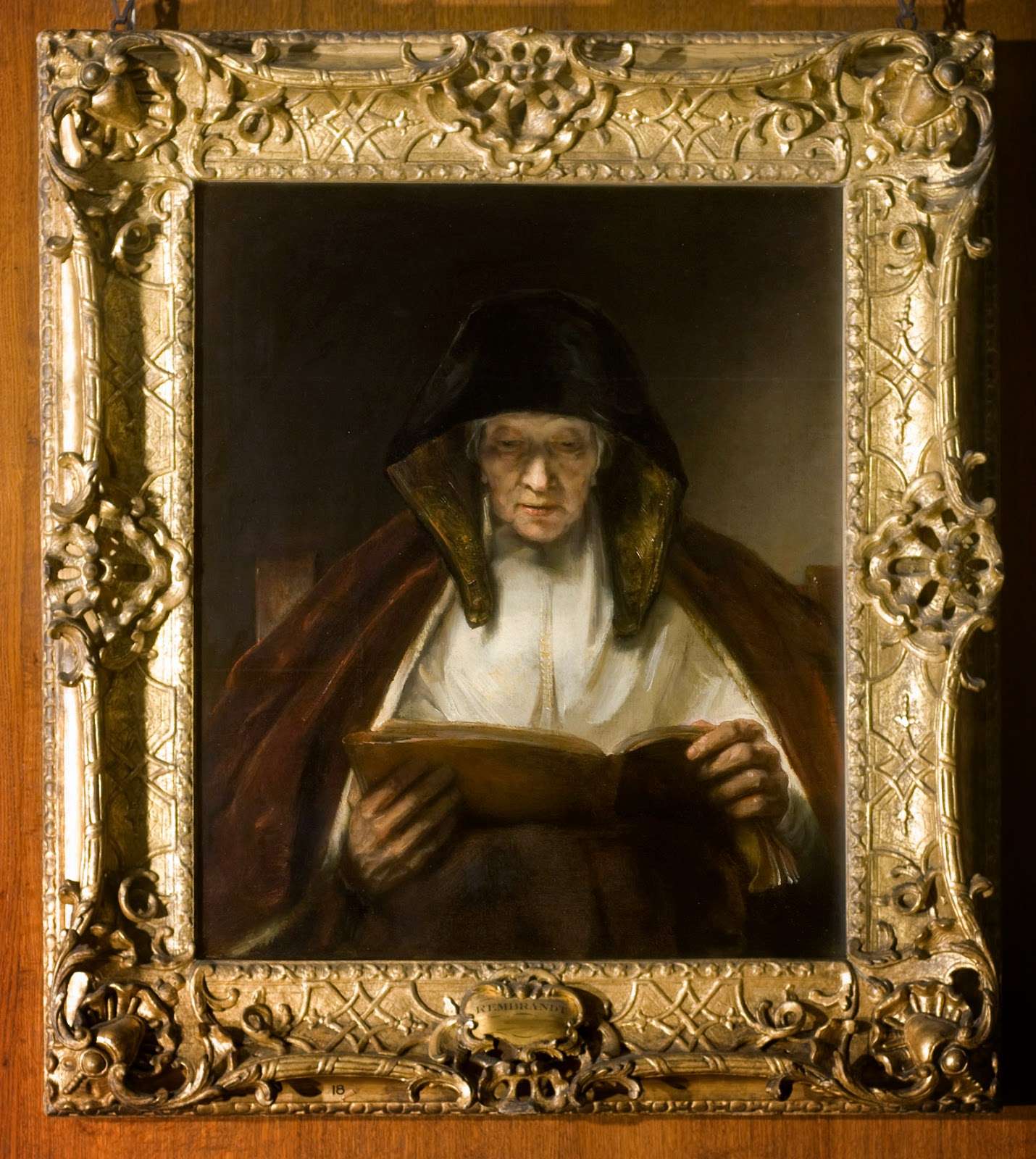 Tate Modern proudly proclaimed Henri Matisse: The Cut-Outs as the most visited exhibition in its history with 562,622 visitors. This surpassed even the landmark Matisse-Picasso exhibition of 2002, with an attendance of 467,166. I have fond memories of visiting Matisse-Picasso at MOMA's temporary quarters in Queens on a snowy April day in 2003. Matisse: The Cut-Outs is a worthy successor. 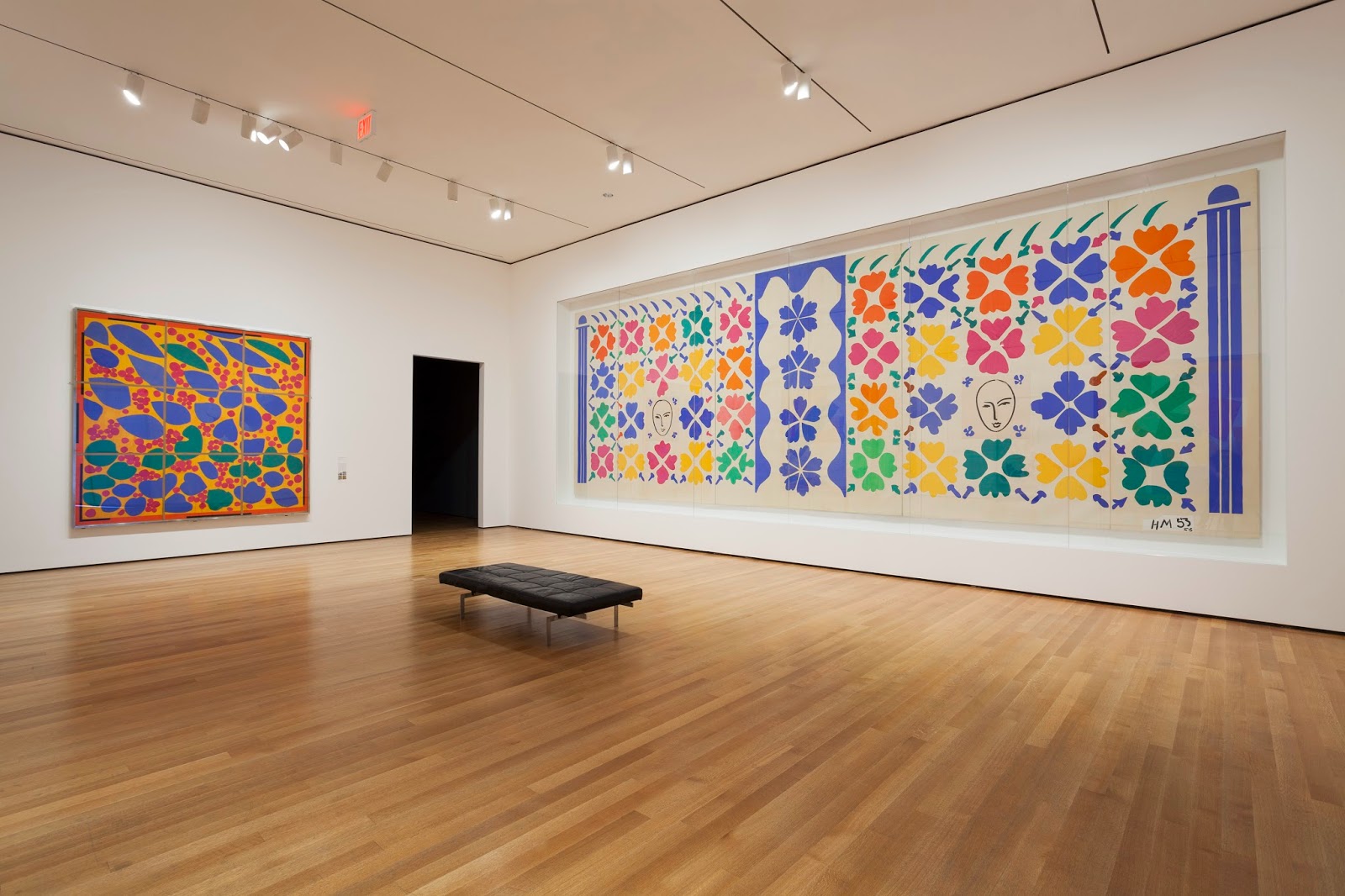 Henri Matisse: The Cut-Outs at The Museum of Modern Art

If great exhibitions like these reside in your memory, they also can confound one's expectations.

Tate Britain's Kenneth Clark: Looking for Civilization exhibition detailed the pivotal role of Lord Clark, who revitalized the National Gallery in London prior to World War II and pioneered art documentaries on television with Civilization in 1969. The exhibit was filled with masterpieces  that Clark had collected, works by Turner and Seurat, as well as British artists of the 1930's and 40's like Henry Moore and  John Piper. The exhibition, which ran from May to August 2014, was visited by a meager 31,343 art lovers.

There really is no accounting for taste. But fortunately, art museums don't always think about attendance when planning exhibits. In the case of the Metropolitan Museum, the curators of Death Becomes Her: A Century of Mourning Attire really were thinking "outside the box." 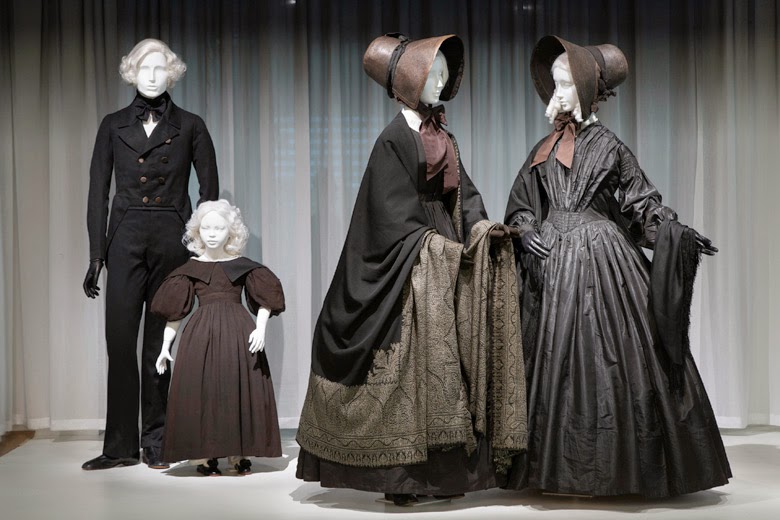 Death Becomes Her at The Metropolitan Museum of Art

What might seem to be a display of mannequins wearing black and gray dresses is actually a fascinating examination of the way that Western societies dealt with loss and sorrow during the Victorian era through the end of World War I. The test of a great exhibition, however, is whether you take insights and emotions with you after you leave the gallery. In the case of Death Becomes Her, I had only taken a few steps away from the exhibit, when I had an experience approaching an epiphany.

Death Becomes Her is on view in the Costume Institute at the Met. To reach its ground floor rooms, you have to travel through the Ancient Egyptian galleries. Details of Catherine Lorillard  & Young Woman with a Gilded Wreath

On the way out of the Met, my wife Anne and I passed by an old favorite of mine in the Egyptian galleries, Portrait of a Young Woman with a Gilded Wreath. We were stopped in our tracks.

Here was the memorial image of another young woman, painted in love and remembrance. In the case of this unnamed, second century A.D. Egyptian woman, this portrait, painted with encaustic wax was intended to accompany her into eternity. It is presently on display in a glass case in the Metropolitan Museum of Art. But at that moment of recognition, she and Catherine Lorillard were united in the empathy of two art-loving fellow human beings living in the twenty-first century.

This is a form of eternity and one which may be found by all people in the realm of art.

Rembrandt (Dutch 1607–1669) An Old Woman Reading, Oil on canvas, 79.5 × 66 cm, 1655. The Buccleuch Collection 144 © By kind permission of the Duke of Buccleuch & Queensberry KBE, courtesy of the National Gallery, London, in conjunction with the Rembrandt: the Late Works exhibition.

Posted by Art Eyewitness at 7:56 PM