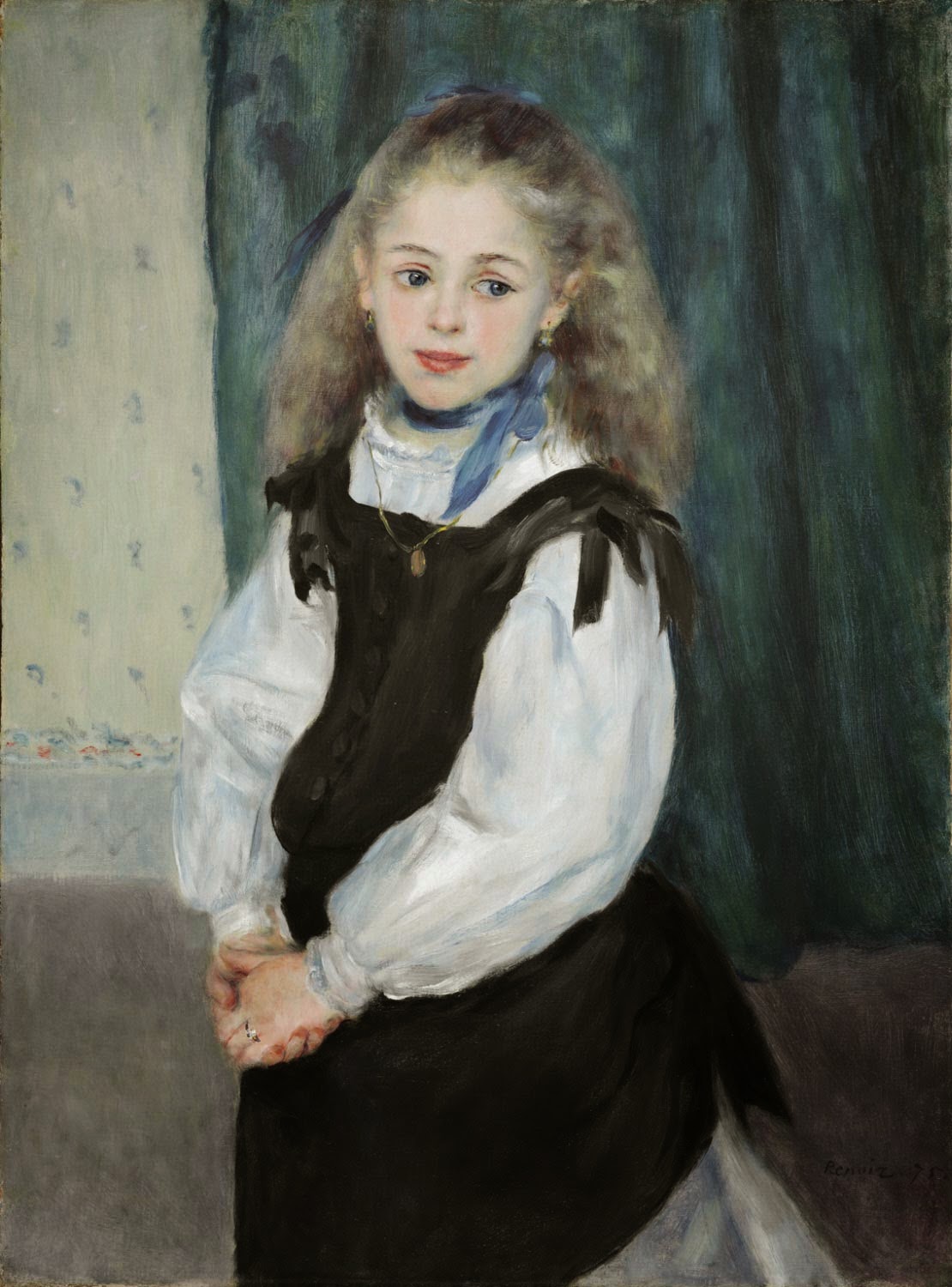 It is impossible to predict what will be the most influential or most innovative art exhibition for the coming year. It's a safe bet, however, that the big Impressionist exhibit honoring Paul Durand-Ruel will be in the running.

Paul Durand-Ruel (1831-1922) was the art impresario who discovered Claude Monet and Camille Pissarro while they were refugees in London during the War of 1870-71. Durand-Ruel went on to market the work of the "New Painters” until the once-derided Impressionists were a global art phenomenon.

Over the course of his long career, Durand-Ruel bought and sold the work of the Impressionists. Often nobody else was doing so and early sales ventures were failures. Durand-Ruel came close to bankruptcy on several occasions. In 1886, the tide turned when a New York exhibition caught the attention of American art enthusiasts. 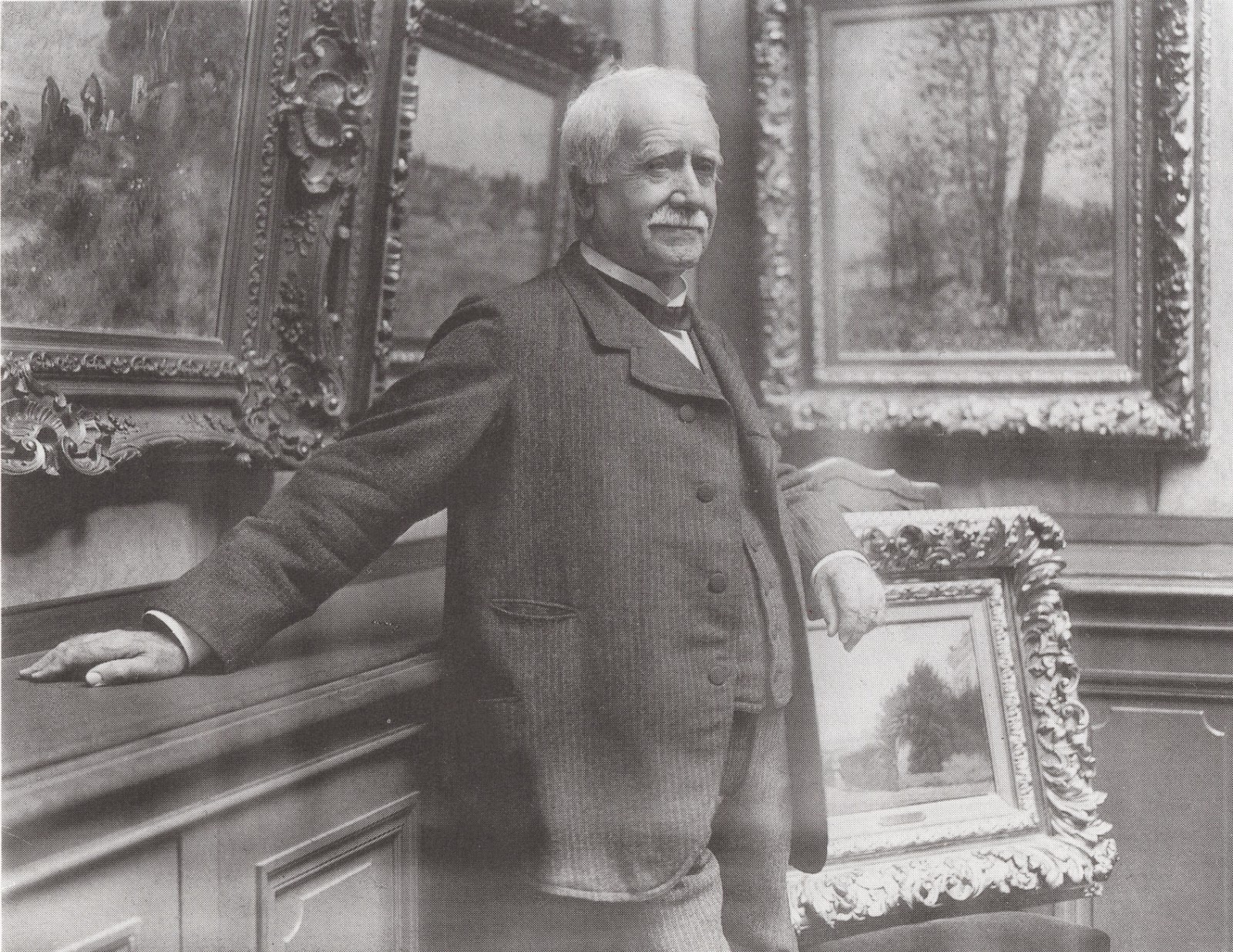 Dornac, Photograph of Paul Durand-Ruel in His Gallery, about 1910

“At last the Impressionist masters triumphed …," Durand-Ruel later declared. "My madness had been wisdom. To think that, had I passed away at sixty, I would have died debt-ridden and bankrupt, surrounded by a wealth of underrated treasures.”

Amazingly, this is the first museum exhibition to highlight the pivotal role of Durand-Ruel in the saga of Impressionism.

One of my favorite paintings at the Philadelphia Museum of Art appears in the exhibits: Pierre-Auguste Renoir's Portrait of Mademoiselle Legrand. The little girl, Adelphine Legrand, was eight years old when Renoir painted her. It was 1875, the year after the first Impressionist exhibition when profits were meager and criticism was harsh. Renoir needed the money that portrait painting offered. 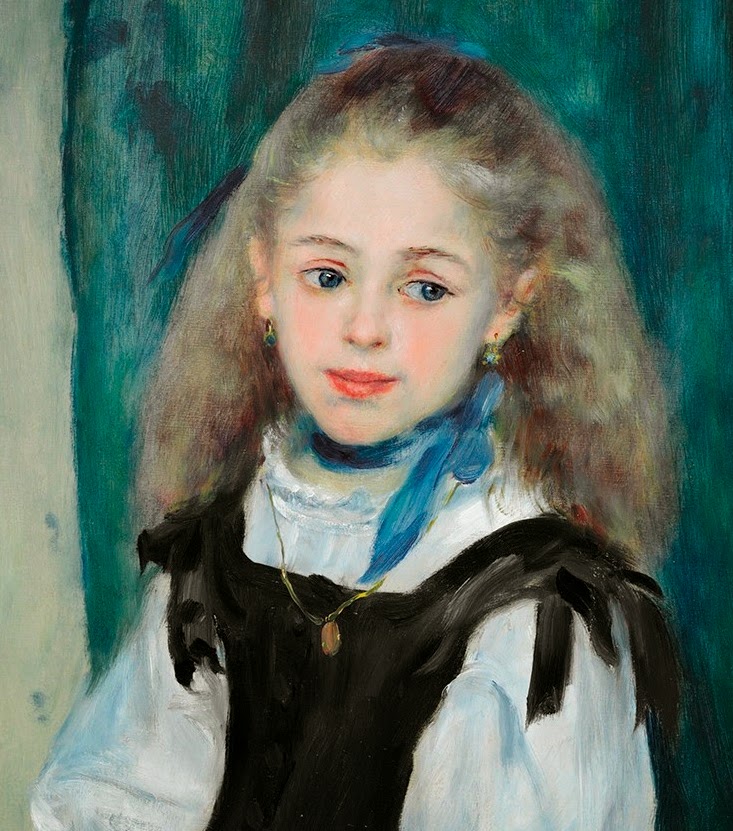 
Portrait of Mademoiselle Legrand is more than a wonderful work of art - though it certainly is that. This marvelous painting is a link back in time from the Impressionists to the Dutch Golden Age of the 1600's.

There are many reasons for the tremendous – if not immediate – impact of Impressionist paintings. Durand-Ruel's  business acumen and risk-taking courage are certainly primary factors. But I think there is another element to this success story, rooted in an earlier school of art that shared many of the same concerns and strengths of the Impressionists.

Old Master art of the seventeenth century was accorded the highest prestige by the Academic art establishment of the nineteenth century. Praise was heaped upon Rembrandt and Rubens and new techniques in painting were frowned upon.

Yet, just a few years before Durand-Ruel began selling Impressionist works, the French art critic, Theophile Thoré, rediscovered the paintings of Jan Vermeer and Frans Hals. Thoré showed that these forgotten Dutch masters of genre and portraiture had explored themes and techniques that the Impressionists would shortly embrace.

Thoré (1807-1869) was a left-wing journalist whose newspaper was banned during the 1848 Revolution. He went into exile to Belgium after the liberal revolts failed. Thoré had already discovered the almost totally forgotten Vermeer on an earlier visit to Holland in 1842 and during his years in exile, 1849-1859, he continued researching the Dutch Golden Age.

There were political reasons, as well as artistic ones, motivating Thoré. Holland was governed by a republican government during its Golden Age. Thoré, writing under the pseudonym of Willem Bürger, was able to skewer the despotic regime of Napoleon III by extolling the amazing cultural achievements of the Dutch Republic during the 1600s.

Thoré succeeded in rescuing Vermeer and Frans Hals from lingering under the shadow of Rembrandt. In 1869, the Louvre received a huge bequest of Dutch paintings collected by Louis La Caze, a doctor who shared Thoré's enthusiasm for Dutch painting. Hals' smiling Gypsy Girl was one of the major paintings of the bequest and is now an iconic work in the collection of the Louvre.

Sadly, Thoré died the same year as the La Caze bequest. The torch, however, had been passed. Many of the young painters who would form the Impressionist circle were left-wing in political temperament. These “New Painters” eagerly embraced the portraits of the Dutch middle and working class by Hals.

Frans Hals (1580-1666) impressed the artists of the Impressionist era with the spontaneity and simplicity of his technique. Hals was born in Antwerp but had fled the advance of the Spanish armies determined to crush Protestant dissent in the Low Countries. Hals’s immigrant status lends a certain degree of poignancy to the way that he chose the plain folk of Holland as the favorite subject of his art.

The source of Hals’s manner of painting is more of a mystery. The Baroque era valued minute attention to texture and detail. Hals, however,  paid little attention to either. Instead, he created a technique that used the effect of light to delineate the essential form and the inner character of his subject. Hals painted portraits to register from across a room – just as people are viewed in real life. It was a style all his own.

Hals brilliantly captured every possible emotion at one time or another on his canvases. From the smug arrogance of his famous (and misnamed) Laughing Cavalier in the Wallace Collection in London to the look of spiritual fervor on the face of St. John the Evangelist at the Getty Museum in Los Angeles, Hals evoked the entire spectrum of human feeling. 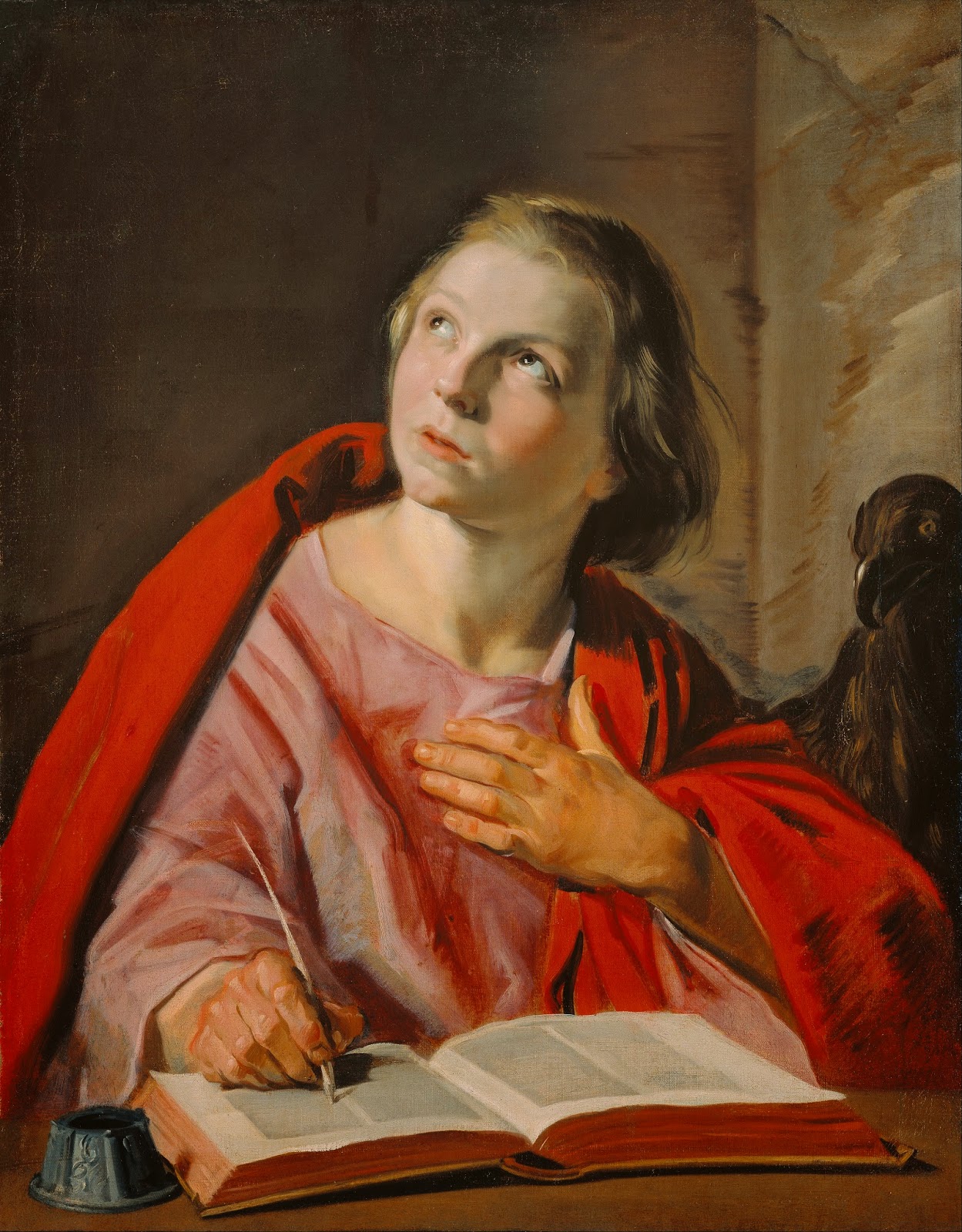 Hals’ grasp of human nature has not passed without critical comment. Like 1950’s Cinemascope movies, his range is often said to be "wide but not deep." But if you look closely enough, especially at the children he painted, you will see real psychological insight. 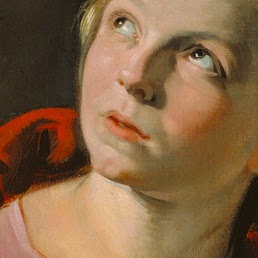 Has there ever been a better depiction of youthful character in the making than Hals’ painting, Boy Reading? This is thought to be a portrait of his son Nicolaes Hals (1628-1686), who later became an accomplished landscape painter. Boy Reading is a wonderful counterpart to Renoir’s Mademoiselle Legrand. Both paintings depict young people striving to be grown-up. Nicolaes and Adelphine, across the divide of two centuries, are shown growing into the persons they will become.

Hals, as befitted a Dutch painter of his sober-dressed countrymen, was accomplished in handling black paint. Nicolaes is in bathed in sunlight in Boy Reading and this meant the use of subtle gradations of black and gray color to convey the parts of his garments reflecting the light or residing in shadow. 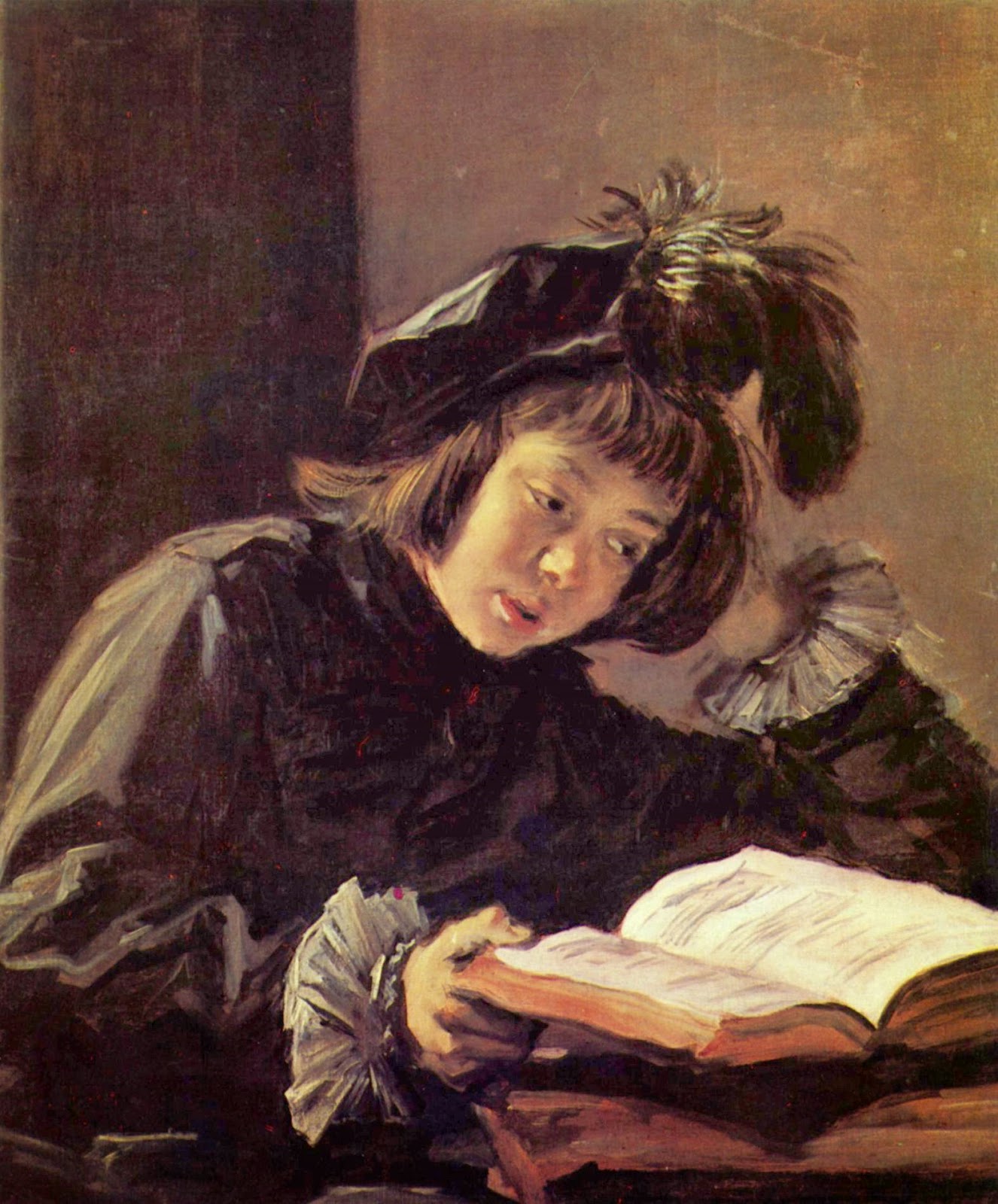 
My wife successfully faced a similar challenge, a couple of years ago, when she painted three black-garbed figures emerging into sunlight. I learned from observation of her successful efforts that the level of skill needed to bring this task to fulfillment is very great.

Hals was so far ahead of his time in technique that he could train no students to manipulate paint in the quick, fluid strokes that he used so brilliantly. He had to wait until the Impressionists to find worthy successors.

Does that mean that Hals was the first Impressionist? Was Hals the “inventor” of Impressionism?

There was an affinity, however, between the Impressionists and the Dutch painters rediscovered by Thoré. A brief comparison between Hals and Renoir is worthy of consideration.

I think an instinctive comradeship existed between Renoir and Hals. Rather than a close study of Hals by Renoir, it was a case of two great portrait painters sharing insights across the centuries.

Between 1875 and 1890, Renoir was the leading Impressionist portrait painter. His style and achievements bear comparison with Hals, as can be seen with Mademoiselle Legrand. Many – but not all – of his portraits have the same austere, uncluttered backgrounds of Hals’s work. The essential character of Renoir’s protagonists make their presence felt in a crowded room just as they do in a work by Frans Hals. 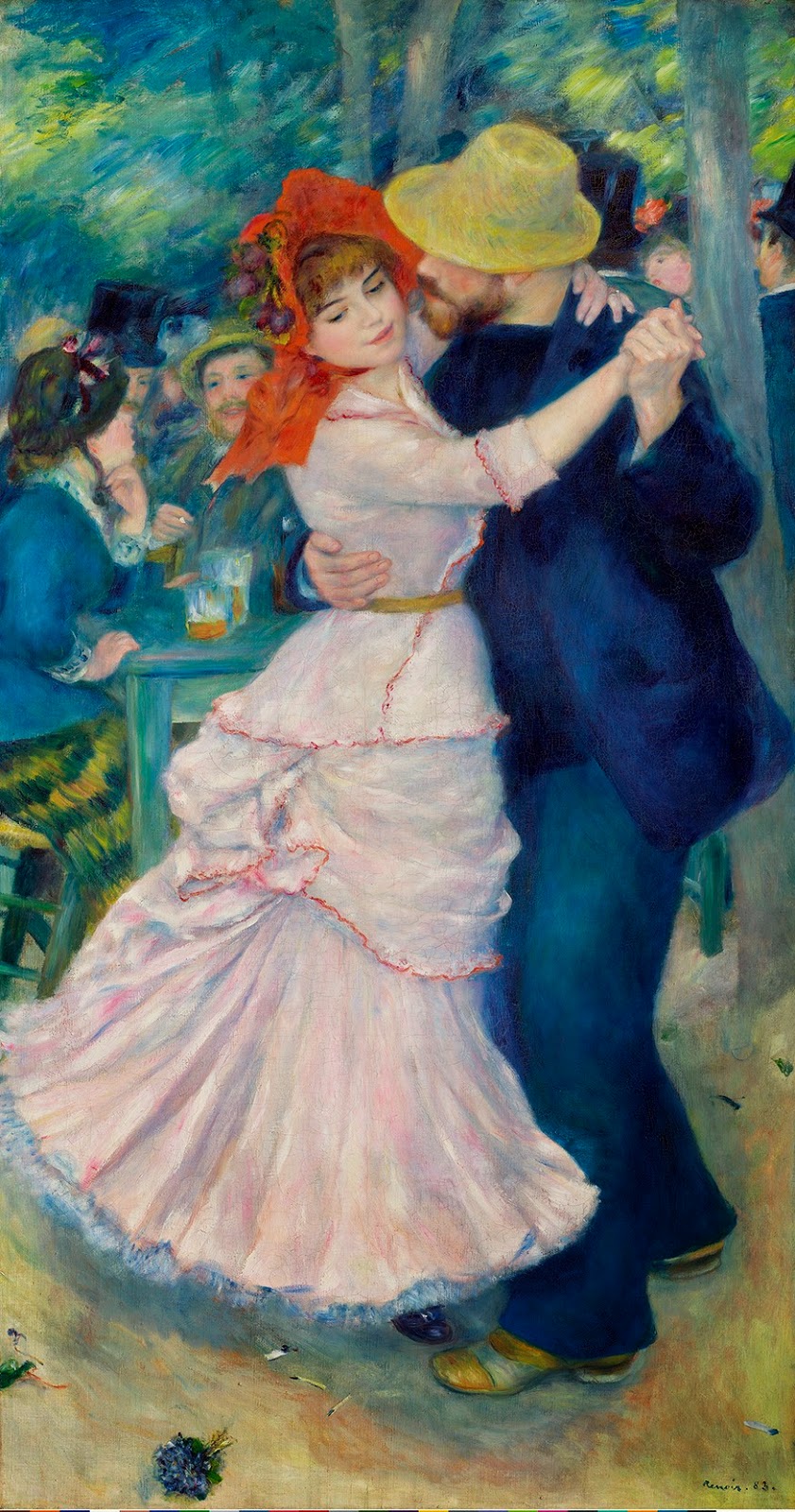 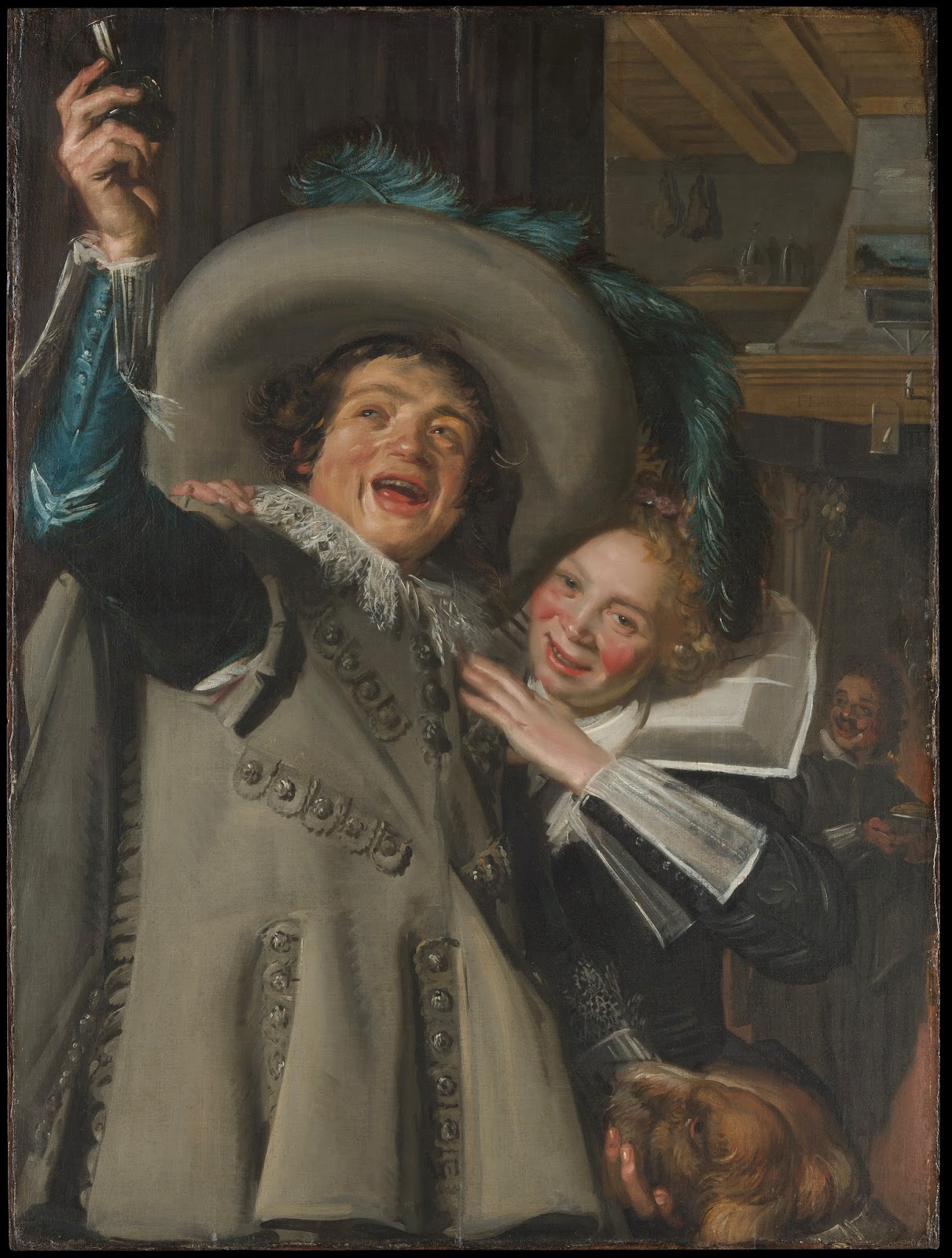 
Later, when rheumatoid arthritis began to grip Renoir’s body and a desire to explore eighteenth century classicism dominated his artistic goals, Renoir's career took a different turn. But In 1910, Renoir summoned up all his old skill to paint one last, magnificent portrait with echoes of the influence of Frans Hals. Significantly, the portrait was of Paul Durand-Ruel. 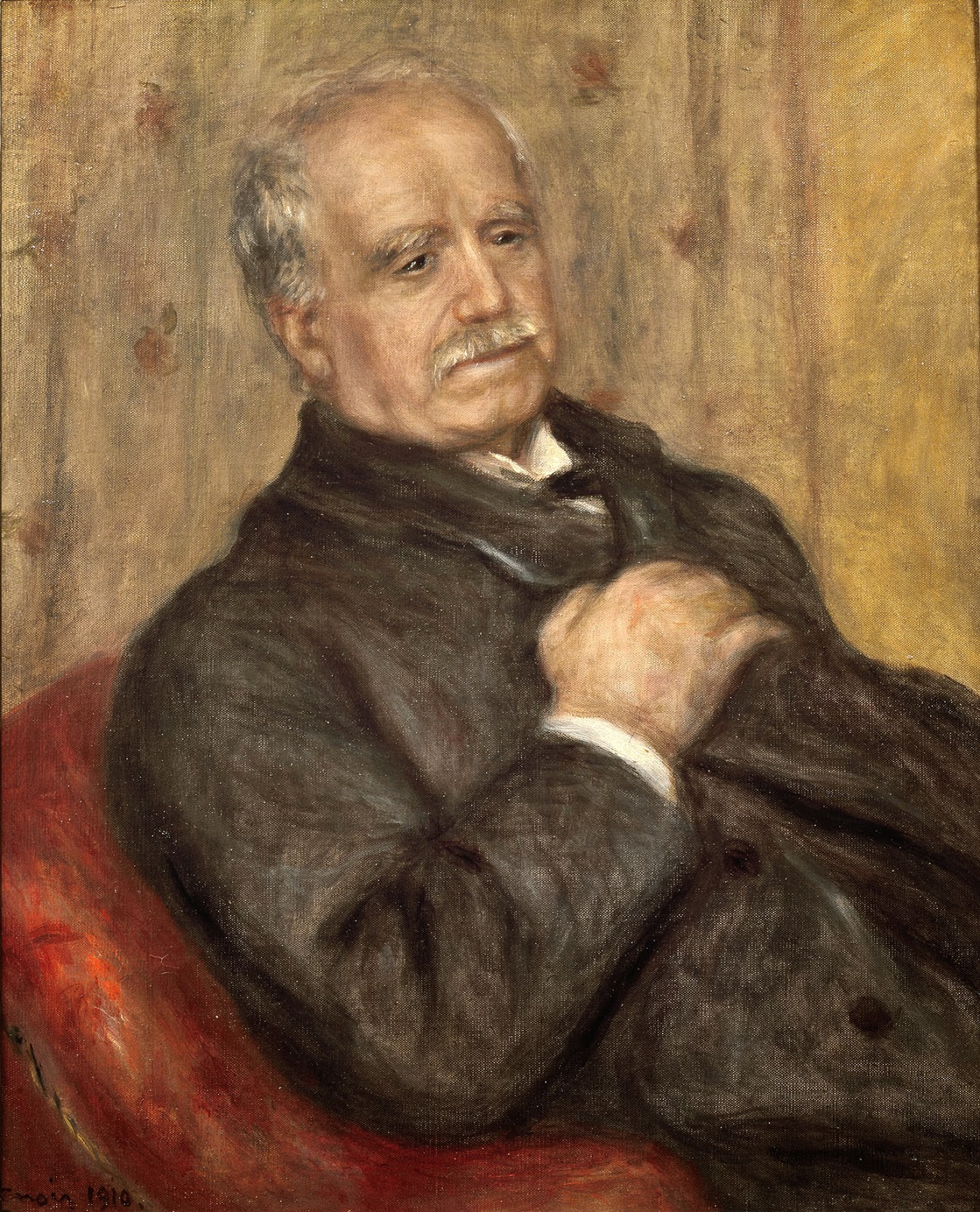 
Durand-Ruel was well aware of the social factors and influences at work in the world at large. It was a nineteenth century middle class world that Durand-Ruel had to coax and entice to buy Impressionist art.  This liberal, progressive society shared many affinities with the Dutch during their seventeenth century "Golden Age." It says a lot that Durand-Ruel found many of the most enthusiastic buyers for Impressionist art in the United States, which had embraced the Dutch Republic as one of its models during the 1800's.

Interestingly, one of the first French  patrons of Impressionist art was Victor Chocquet, who typified the middle class patrons of art of the Belle Epoque in France. The Oskar Reinhart Collection, located in Winterthur, Switzerland, is mounting an exhibition, Victor Chocquet, Art Collector and Friend of the Impressionists, set to run from  February 21 to June 7, 2015. This exhibit will make a fine counterpoint to the Durand-Ruel exhibitions. 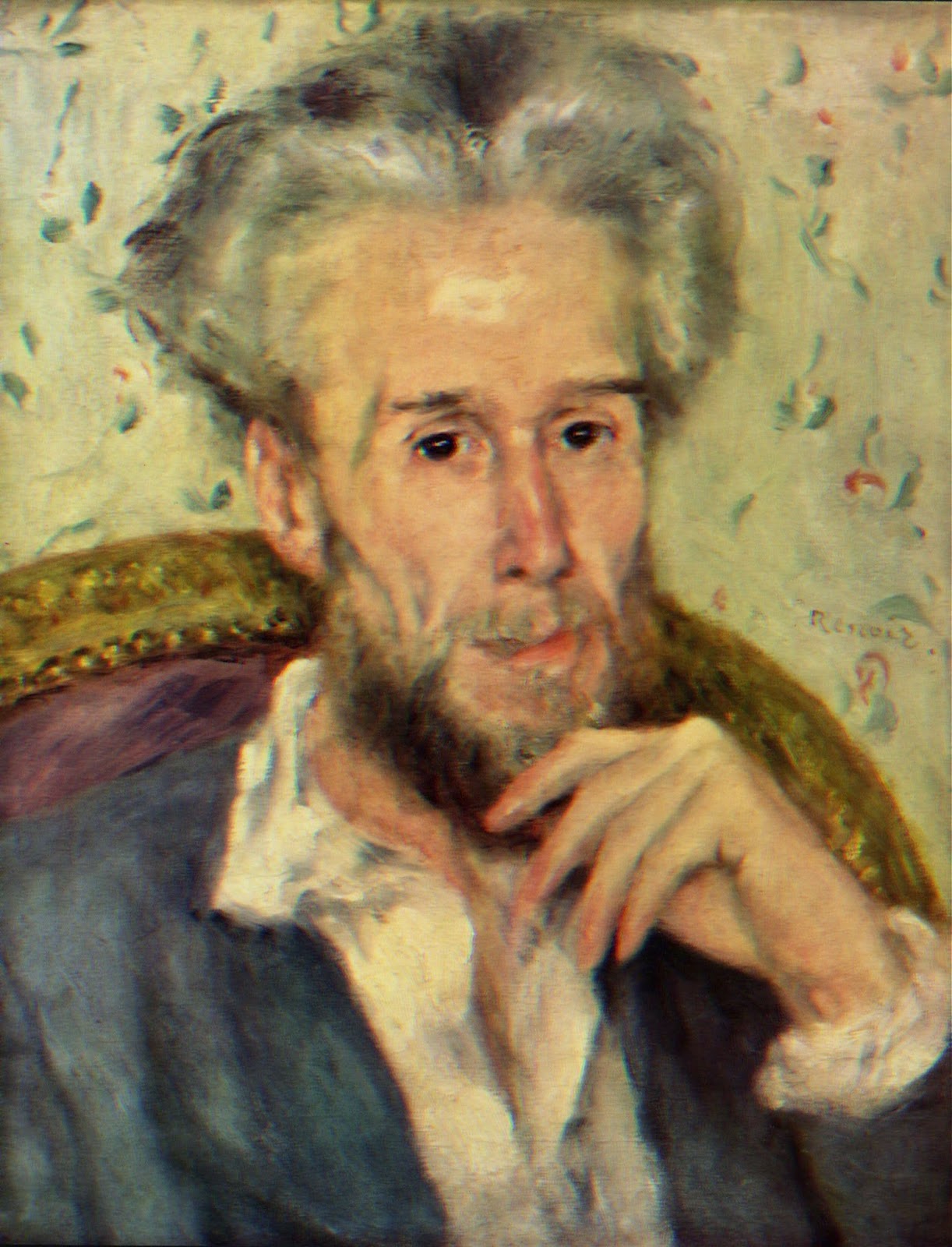 A customs official, Victor Chocquet (1821-91) used his limited financial resources to purchase Impressionist paintings, including a matching pair of portraits of himself and his wife by Renoir. He was among the first art patrons to grasp the genius of Cezanne, whom he personally befriended. By the time of his death, Chocquet had amassed sixty paintings, of which thirty-five were by Cezanne.

Chocquet's collection was impressive for an individual, but it could only make a small impact compared to Durand-Ruel's efforts. Between 1891 and 1922,  Durand-Ruel bought around twelve thousand Impressionist paintings, including more than one thousand by Monet. These he then offered for sale in his galleries and in special exhibits such as in 1905 at London's Grafton Galleries.

“Without him”,  Monet said of Durand-Ruel, “we wouldn’t have survived.”

If there was an Impressionist “brand” then it was Durand-Ruel who "invented" it.  But the source of Impressionist success was the same as it had been in the Dutch Golden Age:  the market for art among the upwardly mobile middle class.  People like Victor Chocquet and the parents of Mademoiselle Legrand bought paintings that reflected their lives, their dreams, their achievements and their aspirations.

Such is the foundation of all great art.

Posted by Art Eyewitness at 6:50 PM