From Ancient to Modern: Archaeology and Aesthetics at ISAW 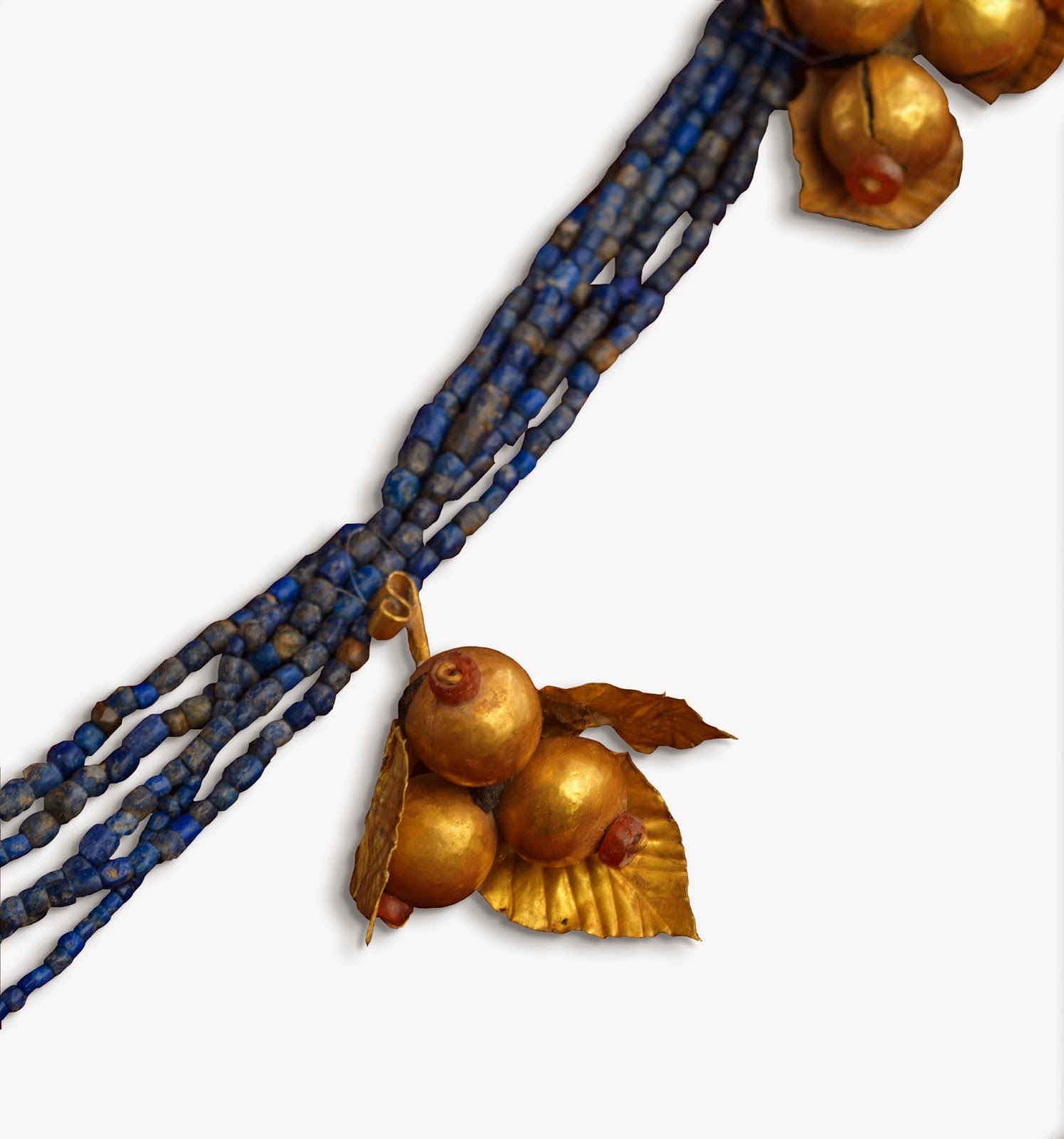 From Ancient to Modern: Archaeology and Aesthetics Institute for the Study of the Ancient World

When visiting art exhibitions, one should always expect the unexpected. Unfamiliar masterpieces and unconventional exhibit presentations can transform our vision of humanity.

Exhibitions ought to challenge our long-term assumptions about art, make us comprehend the inner dynamics of works of art, as well as their surface attributes. In fact there should be a little box at the end of each exhibit where we can dispose of our preconceptions like the ID tags that we discard when leaving museums.

The Institute for the Study of the Ancient World (ISAW) in New York City does not provide a little box for ID tags, as its exhibits are free. Preconceptions don’t last very long in its galleries. Old, threadbare ideas are the only form of ancient history you will not find here.

From Ancient to Modern: Archaeology and Aesthetics is the latest exhibition at the ISAW. Fifty art works from ancient Mesopotamia are integrated with vintage photos and documents from two major archaeological expeditions during the 1920's and 1930's. These artifacts are expertly displayed in a way that recalls the 2011 ISAW exhibit Edge of Empires, which detailed the excavation of the Roman city in Syria, Dura-Europos, during the inter-war years. 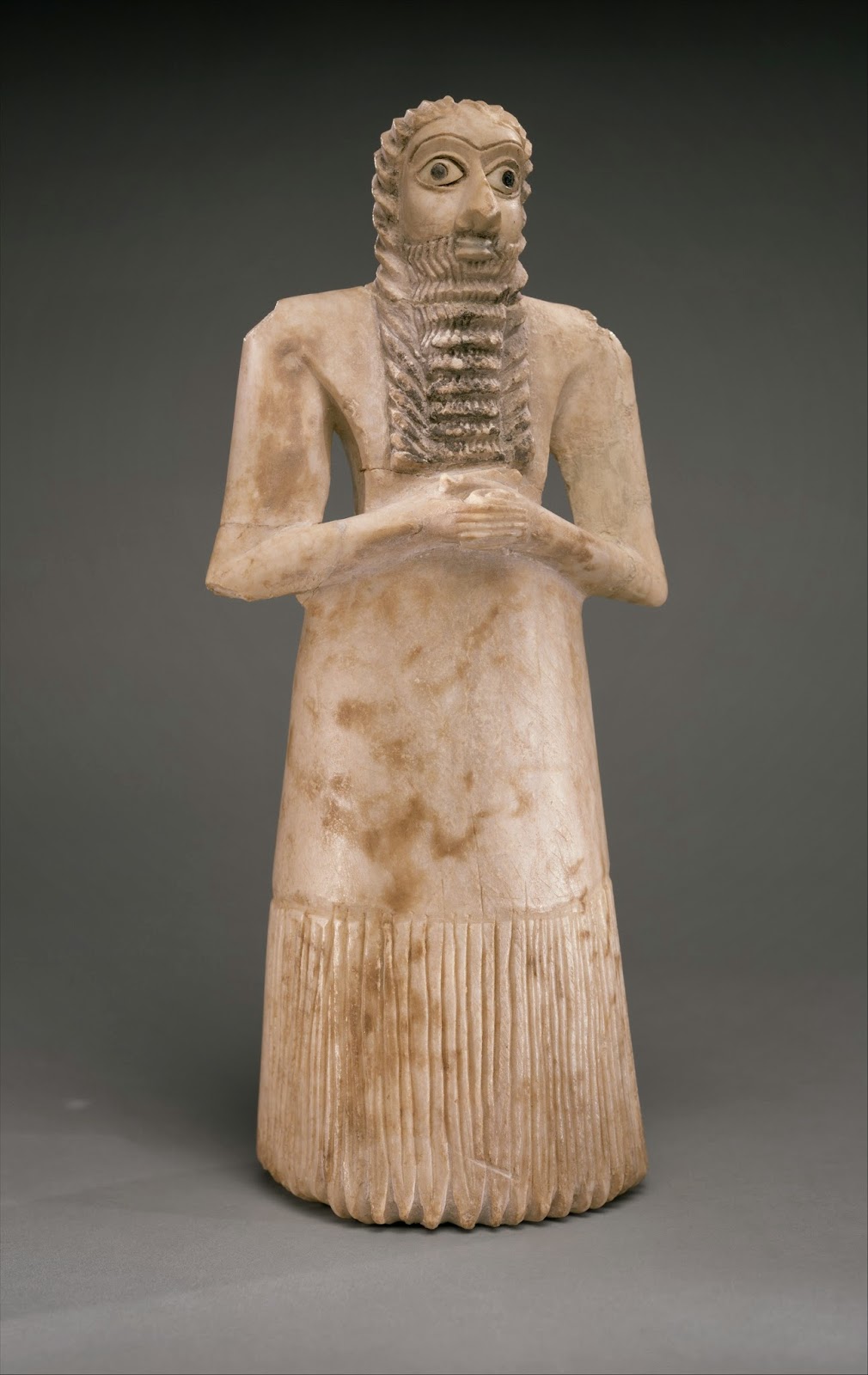 The major innovation of From Ancient to Modern: Archaeology and Aesthetics is the inclusion of several masterpieces of modern art.  This is a first for ISAW and not as surprising as it might initially seem. These works, created by Henry Moore, Alberto Giacometti and Willem de Kooning were all influenced by the objects unearthed at the celebrated "digs" in Iraq during the period between the two world wars. 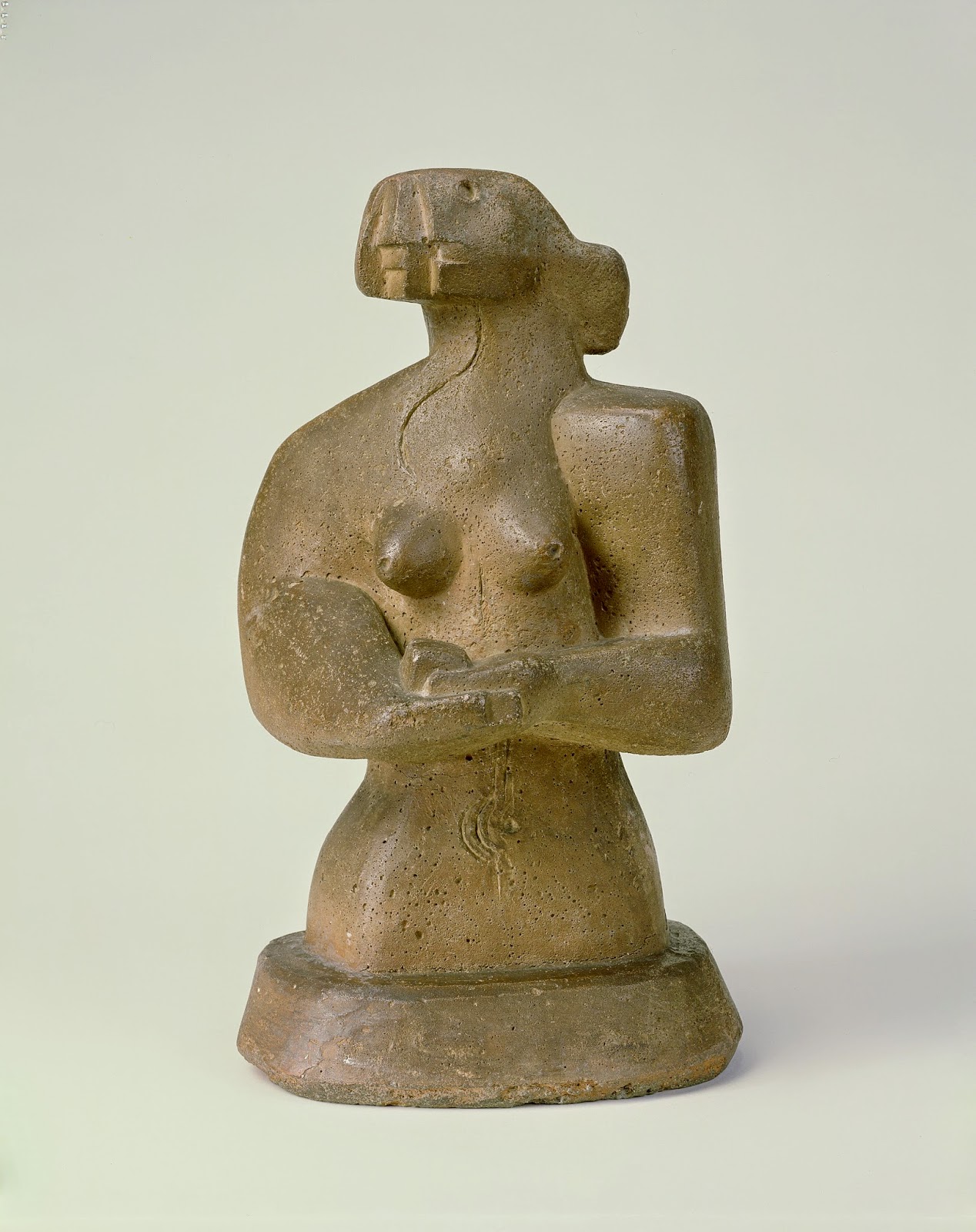 The curators of From Ancient to Modern took the even bolder step of widening the scope of the exhibit to include art by contemporary artists. These works by Jananne al-Ani and Michael Rakowitz underscore the human tragedy of recent wars in Iraq and the tragic looting of the National Museum of Iraq in 2003.

With this deeply moving exhibition, Jennifer Chi, ISAW’s Director of Exhibitions, and Professor Pedro Azara, of the Polytechnic University of Catalonia, have powerfully asserted a visionary role for art in articulating the values of human society.

All this in two moderately-sized galleries at 15 E. 84th Street in NYC!

History begins at Sumer in Mesopotamia, as the famous book by Samuel Noah Kramer declared. But archaeological ventures to Mesopotamia got a late start, at least in comparison with expeditions to Egypt. The reasons for this are complex. But the discovery of the treasure-filled tomb of Tutankhamun in November 1922, which sparked world-wide Egyptomania, spurred two major efforts to uncover the buried past of Mesopotamia. 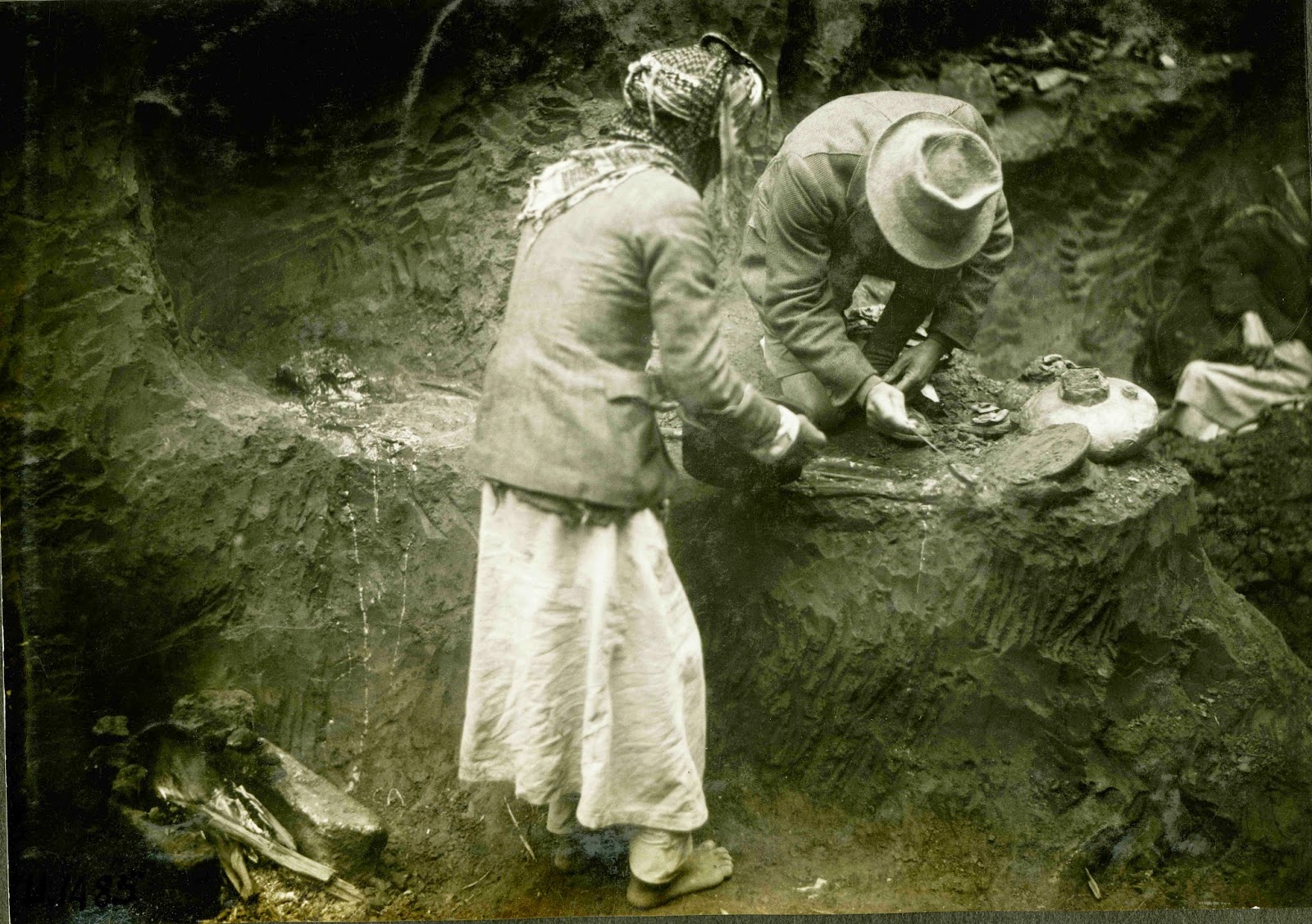 
The first of these was a joint British Museum/University of Pennsylvania partnership which focused on the site of Ur in southern Iraq. Ur of the Chaldees was the birthplace of the Biblical patriarch, Abraham. The great British archaeologist, Leonard Woolley, led a series of "campaigns" to Ur starting in 1922 and lasting until 1934.

The second mission to Mesopotamia was the Iraq Expedition of the Oriental Institute of the University of Chicago. From 1930 to 1937, a distinguished Dutch archaeologist, Henri Frankfort, brought a well-organized team of scholars to the Diyala River valley. A tributary flowing from the north into the Tigris River, the Diyala River had previously been thought to be too far from the main centers of early Sumerian civilization along the Euphrates River to yield much of interest. The methodical Frankfort disproved such speculations with history-changing finds on a very big scale.

The military terminology of archaeology this period is not coincidental. As the superb companion volume to the ISAW exhibit makes clear, Woolley's excavations had the direct support of the British Army and Colonial Office which dominated Iraq in the years following World War I. Frankfort's "campaigns" in the more remote Diyala region benefited too from the prestige and power of Western colonialism.

The ISAW exhibit is subtitled Archaeology and Aesthetics. As well as being an accomplished archeologist with recent fieldwork (done under dangerous circumstances) in Iraq, Professor Azara is a noted authority on aesthetics. The way that human beings perceive art and then conceptualize it in terms of personal experience or societal influences is of vast significance.

Such aesthetic concerns are often ignored or treated as rarefied, elitist ideals. The ISAW exhibit proves that prejudice towards deep thinking about art is totally wide of the mark. Aesthetics, as the companion volume notes, is a vital mode of critical thinking. Aesthetics enables us to judge and to transform objects and images "with meaning, into windows to the world or to ourselves."

Aesthetics, from time to time, need a little help from the Publicity Department. The discoveries at Ur were a notable example of this interaction.

The ISAW exhibit deals with the savvy manipulation of the media culture of the 1920's and 1930's by Leonard Woolley and his fashion-conscious wife, Katherine. Woolley's PR efforts were rewarded by the discovery in 1927 of the glittering diadem of Queen Puabi and a mass of other jewels and golden accoutrements, dating from 2500 to 2300 BC, at Ur. It was an archaeological coup to rival the treasure of Tutankhamun. 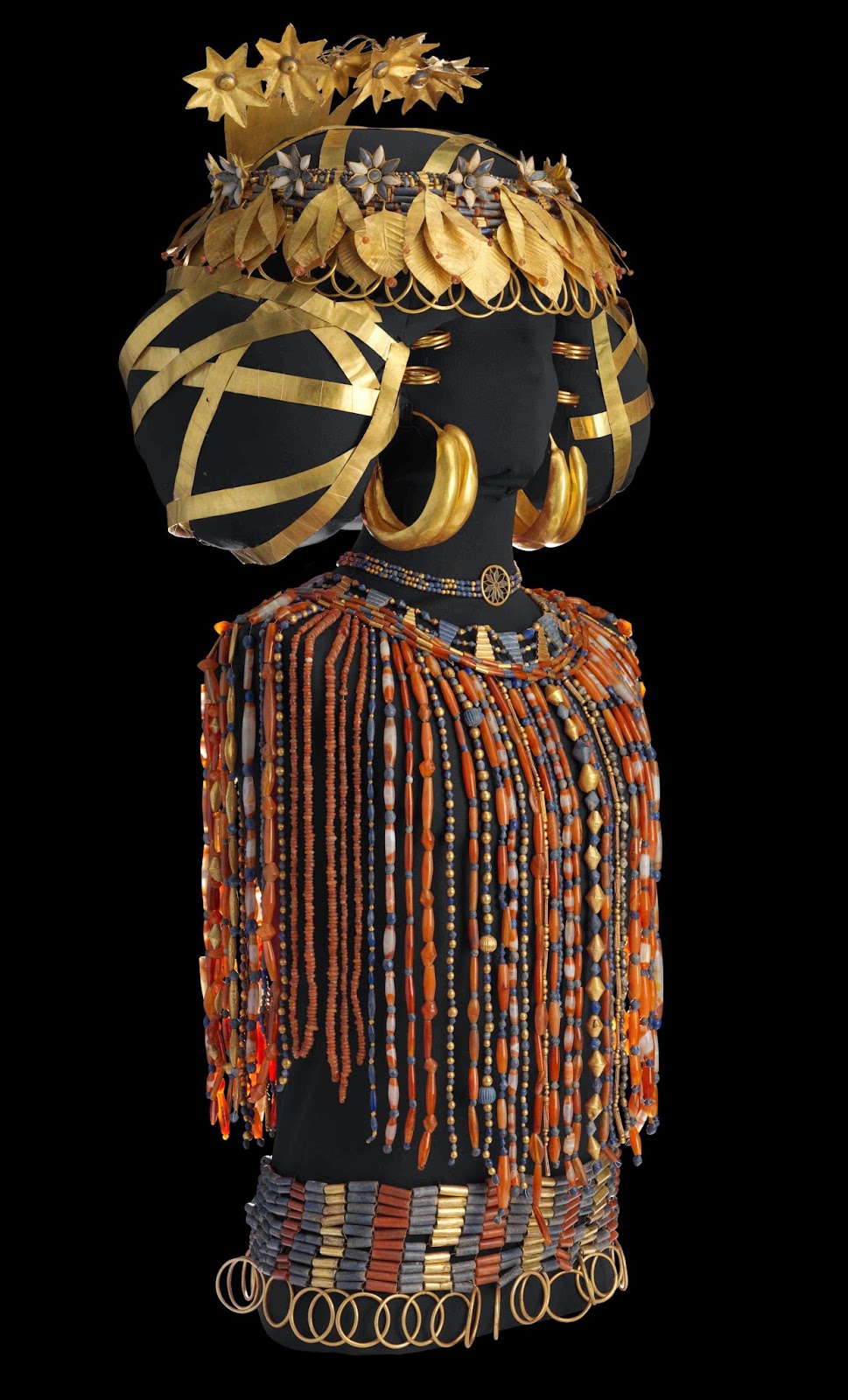 Woolley left no publicity venue untapped. From color photography supplements in the Sunday newspapers of the era to travelling exhibits of the Ur treasures, Woolley kept the Mesopotamian discoveries before the public eye. I was particularly struck by the catalog of a special display, Exhibits from the Royal Tombs of Ur of the Chaldees, held in 1934 at the Strawbridge and Clothier department store in Philadelphia! 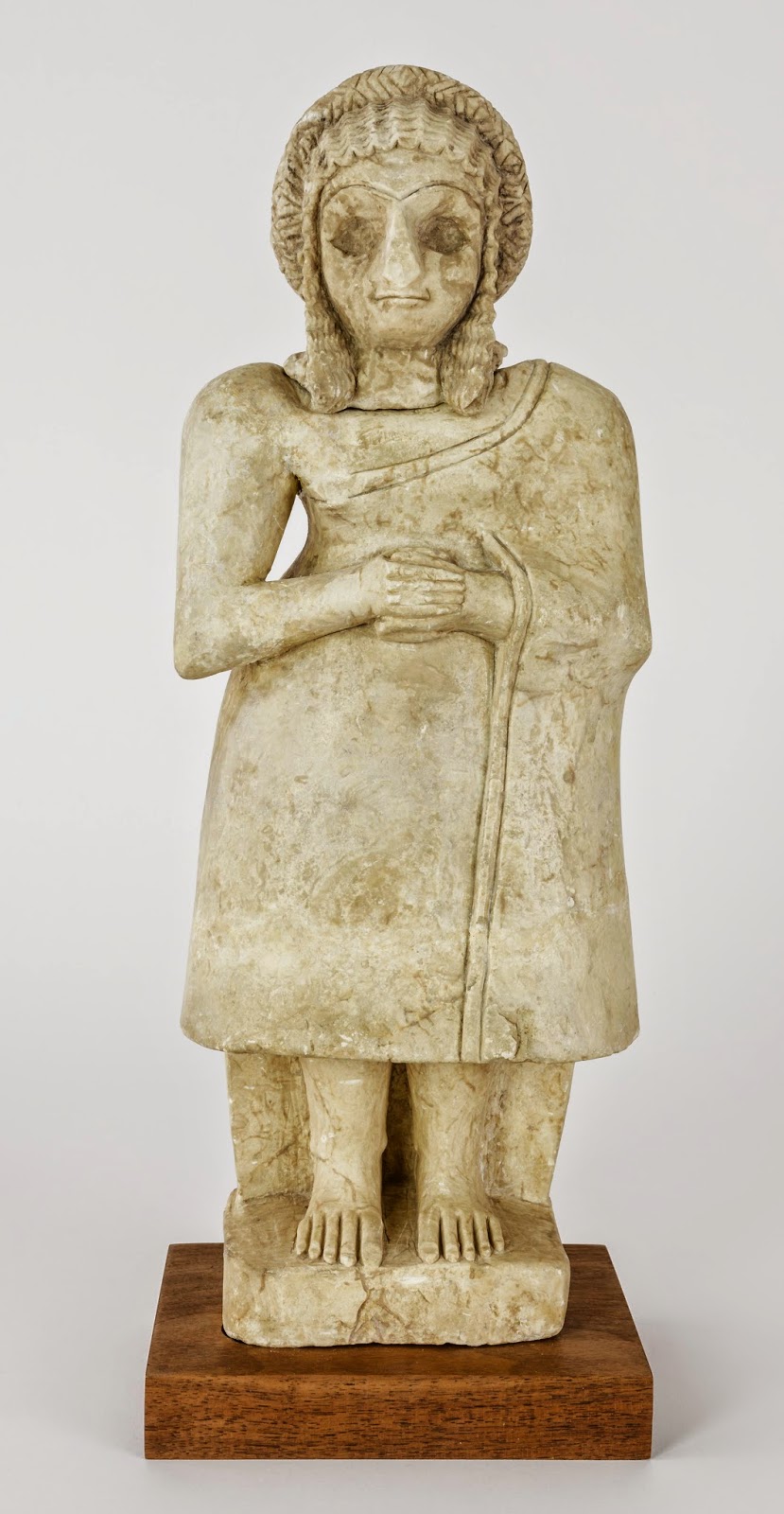 The enjoyable and fascinating array of ancient art works and publicity documents related to Ur in the ISAW exhibit naturally command our interest. But Henri Frankfort's discoveries at the Diyala River excavations were hugely significant as well. These statues or votive images were initially characterized in some quarters as "idols." Many questions were raised whether these unsettling objects were art works at all.

I am planning a separate post on Art Eyewitness to review the companion volume to From Ancient to Modern and will discuss this theme in more detail. For now, it is enough to note that Henry Moore and Willem de Kooning were moved by these ancient sculptures to create new art works of their own. 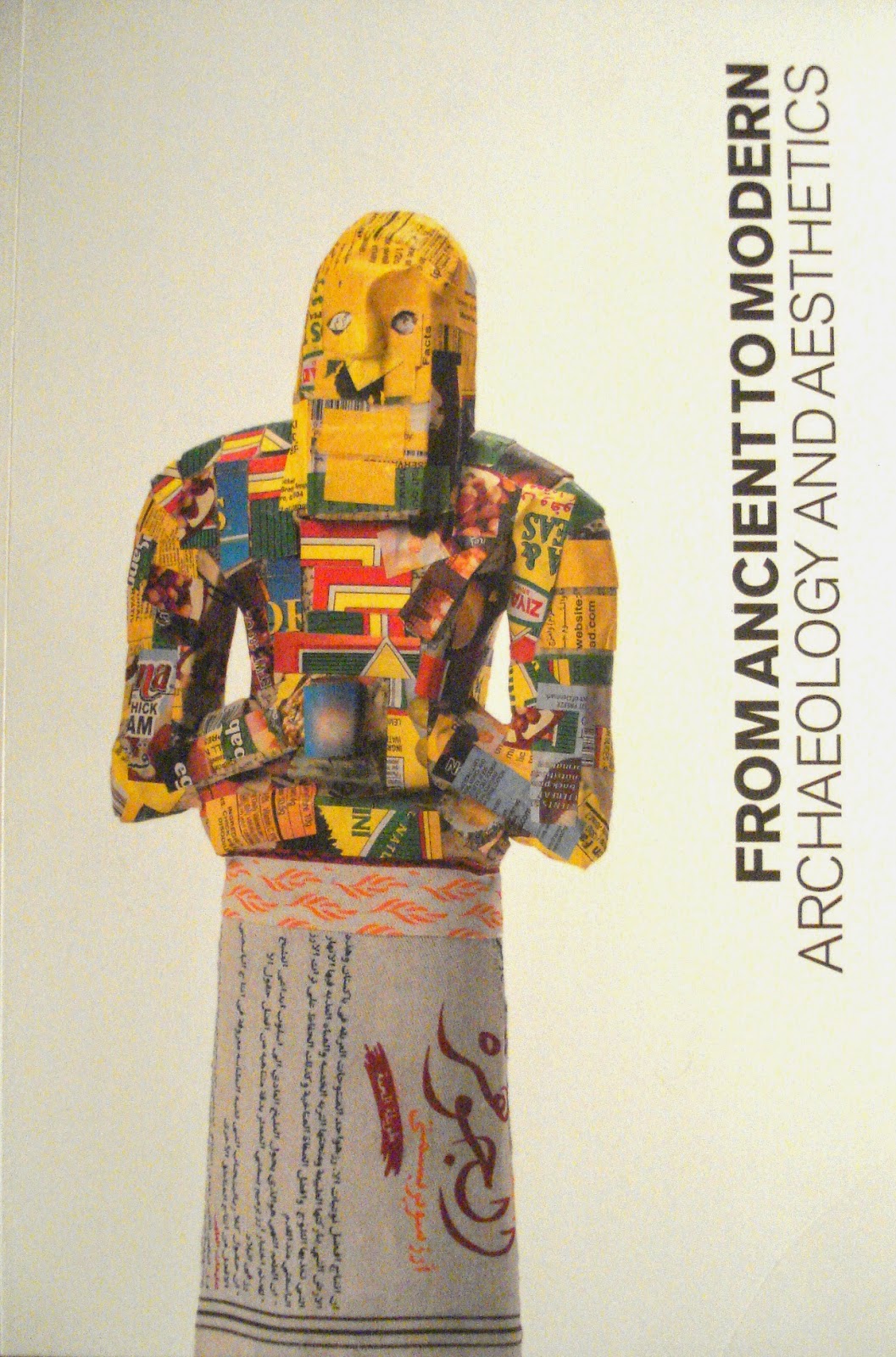 Cover of catalogue, Ancient to Modern: Archaeology and Aesthetics

It is in the second of the ISAW galleries that I wish to linger for there the contemporary works by Michael Rakowitz and Jananne al-Ani are presented. Rakowitz's family is of Iraqi-Jewish heritage and al-Ani was born in Kirkuk, Iraq. Both of these artists now live and work in the West, but the history of Iraq, ancient and modern, is woven into their work with the thread of memory.

Rakowitz recreated objects looted from the National Museum of Iraq in Baghdad in 2003. Troops from the U.S. and coalition forces were posted nearby but failed or were not ordered to intervene to stop the vandalism. Rakowitz used cheap disposable materials from recycled milk cartoons and cigarette packs to recreate these lost art works in order to emphasize how a nation’s culture can be treated as "disposable."

Given the recent adulation for the "Monuments Men," who saved thousands of art works from the Nazis, the looting of the National Museum of Iraq is inexplicable. The failure of Allied troops to protect the cultural heritage of Iraq raises troubling questions about the level of Western commitment to the people of Iraq and other Middle Eastern nations. The team that Woolley led to Ur during the 1920's brought some of the most precious art works of Mesopotamia to the collections of the British Museum and to the University of Pennsylvania Museum. But the ancient art that was excavated and placed in the National Museum of Iraq in Baghdad was shrugged-off in 2003.

Whatever the reason for this appalling blunder, Rakowitz's installation does not let the Western powers off the hook of collective responsibility.  Jananne al-Ani, with her photographic and multi-media work, likewise presents challenging, critical images relating to Iraq’s agony. 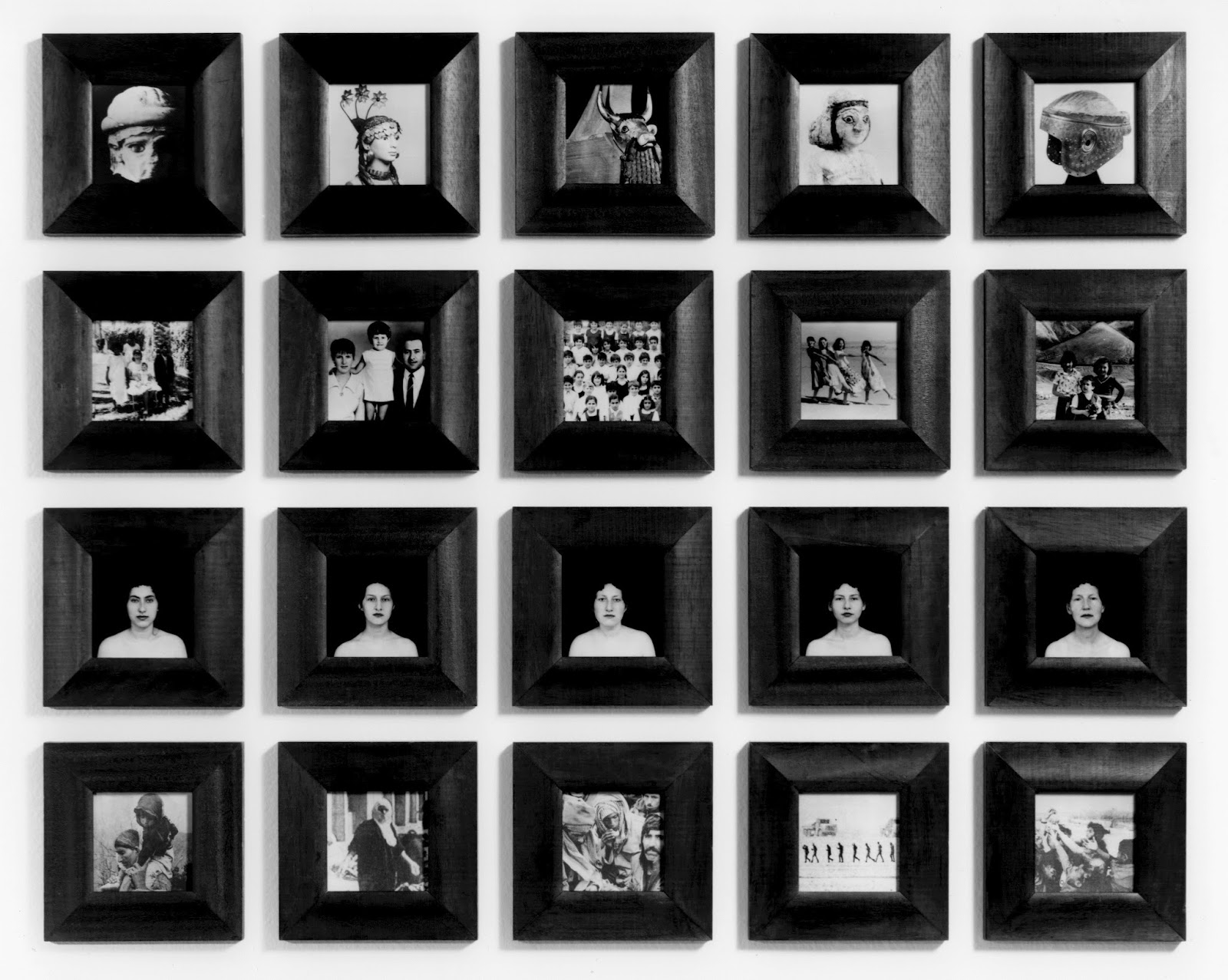 
Untitled May 1991 [Gulf War Work] is on display at the ISAW. It is a deceptively simple piece, with a grid of twenty images arranged on a wall in the manner of a family photo gallery. One of the rows indeed shows photos of al-Ani's family. The top row shows images of treasures from the National Museum of Iraq and a depiction of Queen Puabi wearing her fabled golden diadem. There is a row of portraits of Iraqi women with haunted or grief-stricken eyes. Any of these women could be a latter-day Puabi, fit to wear her golden diadem.

These photographs are followed in the bottom row by images of war.

Jananne al-Ani's Untitled May 1991 is the kind of art work that I referred to at the beginning of this review. It is the unexpected work that forces you to question your preconceptions. It struck me with particular force.

During the Gulf War years, I worked as a news research librarian for the Philadelphia Inquirer and the Philadelphia Daily News. One of my tasks was to retrieve and index the stream of Associated Press photos as they were digitally transmitted. Particularly during the 2003 Gulf War "campaign," marked as it was by the prolonged bombardment of Baghdad, I was sickened by many of the incoming images. The AP pictures of dead and mangled civilians, particularly children, were horrific. Very few of these were selected to appear in Western newspapers.

Jananne al-Ani's Untitled May 1991 brought the memories of these terrifying pictures flooding back to me. The “disposable” sculptures of Michael Rakowitz reinforced the effect.  I was not prepared for art work like this at the ISAW exhibit. I'm still looking for a box big enough to discard my preconceptions.

Images Courtesy of the Institute for the Study of the Ancient World, New York City.

Detail of Puabi’s headdress, apple clusters with large bales, ca. 2500–2300 B.C., Ur, Gold, Lapis Lazuli, Bitumen, L. 88 cm,  Joint Expedition of the British Museum and of the Museum of the University of  Pennsylvania, 8th season, 1929-1930. University of Pennsylvania Museum of Archeology and Anthropology (B16684.1) © Bruce White

Leonard Woolley Waxing a Skeleton for Removal, Ur,  Photograph,  ca. 1929-1930 Courtesy of the University of Pennsylvania Museum of Archaeology and Anthropology (191485) © Courtesy of Penn Museum

Cover of the exhibit catalogue, Ancient to Modern: Archaeology and Aesthetics, published by Princeton University Press. Cover illustration by Michael Rakowitz from his installation   The Invisible Enemy Should Not Exist” (Recovered, Missing, Stolen) (2003)