Art Eyewitness Close-up: The Fall of Icarus by Henri Matisse 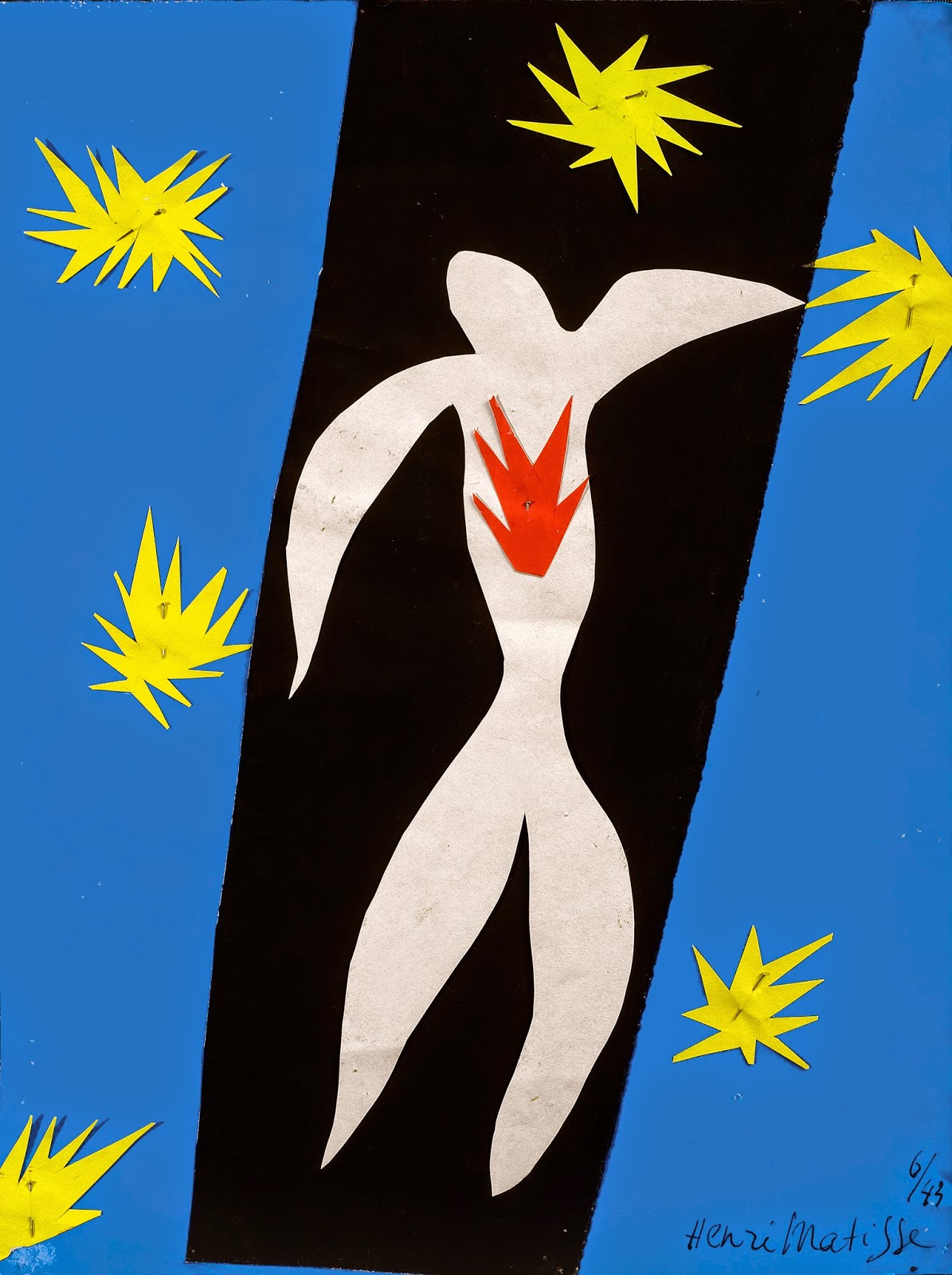 The Fall of Icarus by Henri Matisse

The Fall of Icarus by Henri Matisse (1869-1954) is an example of the paper cut-outs or gouaches découpés that figured so prominently during the last decade of Matisse's life. I have selected this wonderful work of art for the first of a new series of short, focused essays in Art Eyewitness.

I also hope to encourage art lovers to make their way to the Museum of Modern Art in New York to see the exhibit Henri Matisse: The Cut-Outs before it closes on February 10. It is truly a "once-in-a-lifetime" exhibition.

The Fall of Icarus was not the first time that Matisse created cut-outs. Earlier, he made cut-outs to help him prepare the composition of the mural The Dance which he painted for Dr. Albert Barnes during the early 1930's. But when Matisse took a pair of scissors in hand and created The Fall of Icarus in 1943, the very idea of planning any large-scale works in the future must have seemed very problematic.

As years go, 1943 was a terrible one. Although it was apparent that Hitler was not going to conquer the world, it was not clear if he could be stopped from destroying it - starting with France.

Matisse, who had barely survived cancer surgery in 1941, was confined to a wheelchair, no longer able to stand before an easel. But just as an illness in 1890 had occasioned his first bed-ridden efforts to paint pictures, so his precarious medical condition in 1943 led him to launch into the new venture of gouaches découpés. 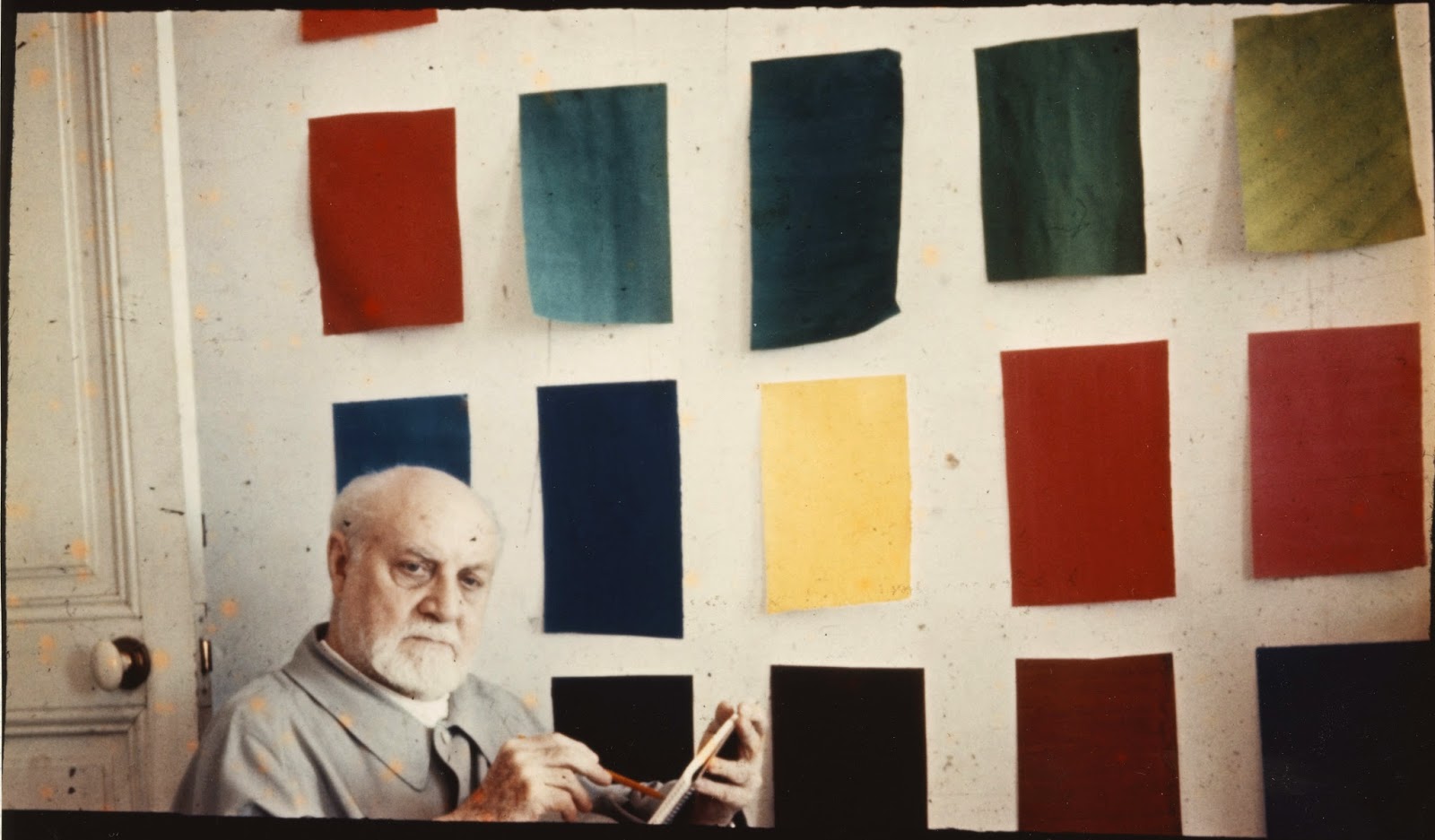 Matisse in front of gouache-painted papers.

Apart from the brilliant color of The Fall of Icarus, the first thing that impresses me is how utterly different Matisse's handling of the subject was from the versions of earlier artists. This is true whether one compares it to Bruegel's ironic scene, where the farmhands fail to notice Icarus drowning in the sea, or more melodramatic versions from the Baroque era replete with melting wax, shredding feathers and a doomed youth plunging earthward.
Matisse's Icarus looks like he has been shot and is reeling backward. There is a famous - and terrifying - photograph of a French soldier being struck by a bullet in the 1916 battle of Verdun. Was Matisse thinking of this photo from the first "war to end all wars" or contemporary scenes from the second?

According to Hilary Spurling, Matisse's biographer, the writer Louis Aragon saw the work soon after it was created. He noted that Matisse said that the splashes of yellow surrounding Icarus "- suns  or stars if you want to be mythological - were exploding shells in 1943."

The Fall of Icarus, however, has a resonance far beyond the war years. By thrusting Icarus in our faces, Matisse banished mythology from the work and made the scene part of our "here and now" reality. Icarus expires before our eyes and Matisse won't let us turn away.

This is a scene of reckoning. Matisse requires our verdict. Do we value glory like Icarus or survival?

Matisse chose survival. But it was not a case of picking flight over fight. Matisse refused offers of refuge in America during the dark days of 1940. Though initially safe in the unoccupied south of France, the situation had changed by 1943. Matisse created The Fall of Icarus while German troops were stationed in the very building that he lived in. The cut-out was an act of defiance, an artist's statement on the coming fall of the Third Reich.

Once peace returned, The Fall of Icarus also marked the beginning of a new phase in Matisse's career. In 1945, a lithograph of the work was used as an illustration in the fine art magazine Verve and two years later a similar version appeared as plate VIII in Jazz, the stunning, limited edition book that Matisse created for his publisher, Tériade.

The Fall of Icarus has lost none of its emotion-shaping power. 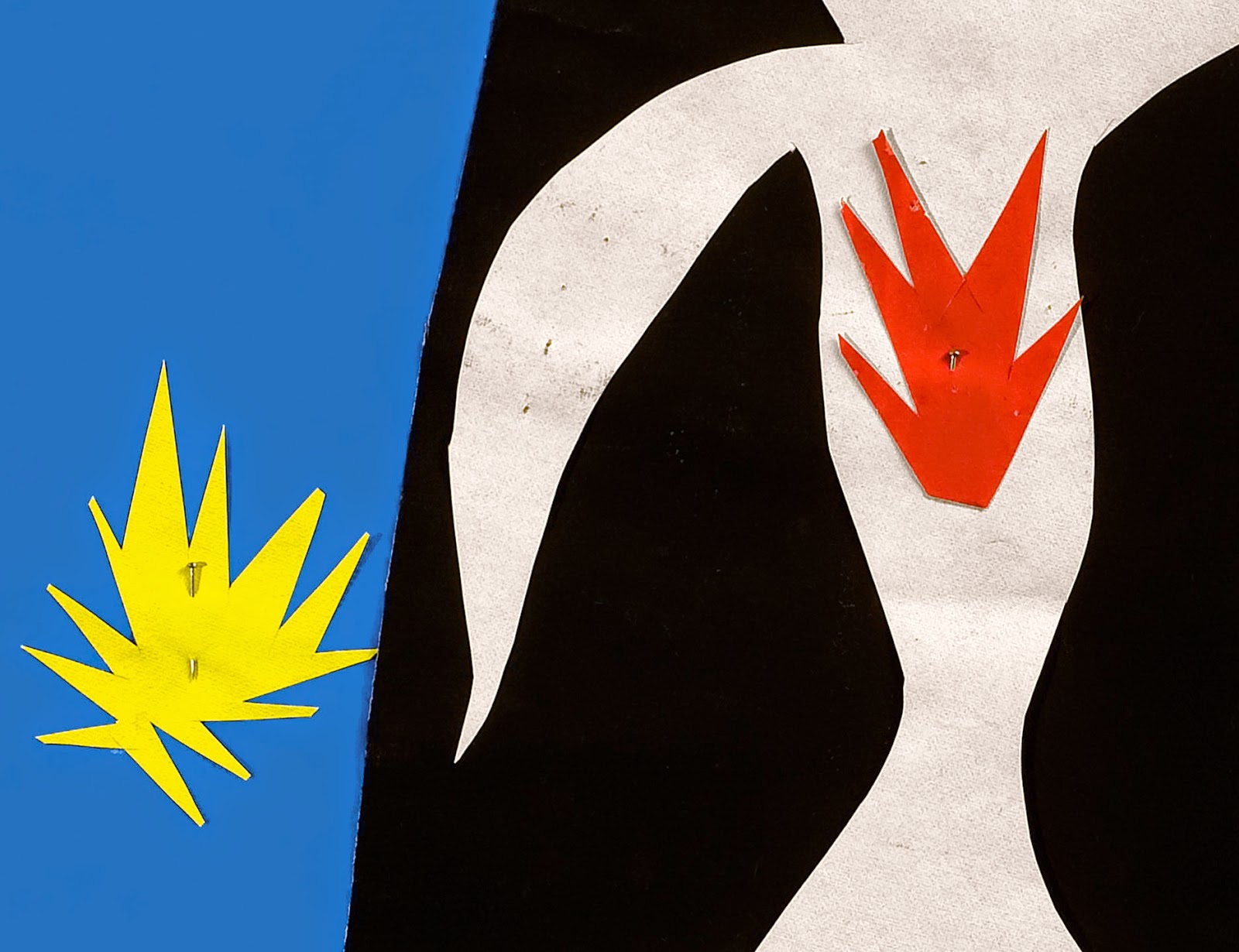 The Fall of Icarus (detail)

How moving it was to stand before The Fall of Icarus at the MOMA exhibition. How poignant is the sight of the very pins inserted by Matisse to hold the pieces of painted paper together to create this masterpiece. How life affirming - ironically - is this depiction of the dying fall of Icarus.

As power-mad despots tore civilization apart in 1943, Henri Matisse took hold of a pair of scissors, a sheaf of colored papers, a handful of pins and started to put the world of beauty back together again.