Pennsylvania German Fraktur at the Philadelphia Museum of Art 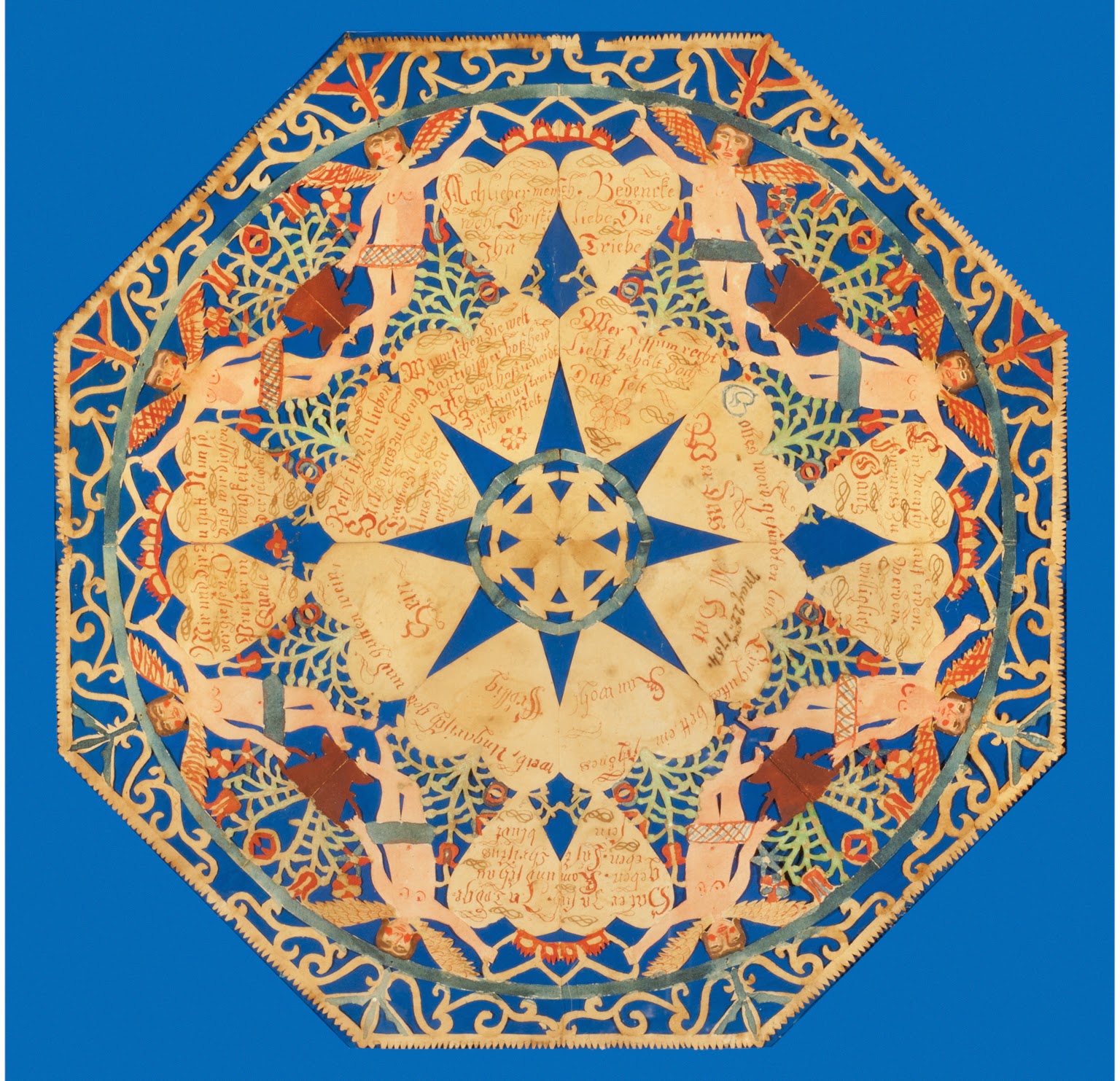 Drawn with Spirit:
Pennsylvania German Fraktur from the Joan and Victor Johnson Collection

This Valentine's Day, the best place to look for hearts and flowers is the Philadelphia Museum of Art.  There you will see wonderful examples of the American folk art genre known as fraktur.

The Philadelphia Museum of Art is hosting an amazing exhibition, Drawn with Spirit: Pennsylvania German Fraktur from the Joan and Victor Johnson Collection.

One of the objects on display really stands out in terms of the Valentine's Day theme. This is an example of scherenschnitte, the Pennsylvania German - "Pennsylvania Dutch" - word for scissors-created "cutwork." The amount of skill, patience and affection that went into the creation of this love note over two and a half centuries ago totally dissolves the arbitrary boundaries between art or craft.

That is true of almost of the works on view in Drawn with Spirit. The exhibition presents the collection of a husband-wife team, Joan and Victor Johnson, who, for nearly a half-century, amassed a jaw-dropping array of fraktur. Folk art it is, but it's great art as well.

Fraktur refers to a form of lettering, "broken" or fractured, first developed during the 1500's. This distinctive calligraphy was embellished  with water color depictions of daily life and visionary spirituality.

Fraktur was most prevalent in southern Germany and parts of central Europe such as Moravia in the Czech Republic which then had a significant number of German-speaking citizens. These regions, devastated by the Thirty Years War (1618-1648), sent a stream of immigrants  during the 1700's to the refuge of William Penn's Quaker colony, Pennsylvania.

This work of "Valentine" fraktur is dated May 22,1754, a little late in the year for a formal Valentine's Day greeting. It is instead a liebesbrief or love letter, shared by a courting couple as they explored the path to marriage.

The ornate calligraphy of fraktur was often surrounded by a thick growth of flowers and vines, bewildering flocks of birds and animals and fantastical creatures, partly human and part-bird or part-fish.

The androgynous angels circling the border of this liebesbrief are pretty ominous-looking. They certainly aren't Victorian cupids. Nor do they have a “come hither” gleam in their eyes.

Fraktur long retained the cultural ambiance of the German-speaking world of the seventeenth century. The small Pietist religious groups which came to Pennsylvania established communities like the Ephrata Cloister that were located away from the mainstream of English-speaking culture. The distinctive nature of fraktur artworks, many of which served as personal or family documents, helped their owners preserve their Germanic identity.

These Pietist groups - Mennonites, the Moravian Brethren, the Schwenkfelders – had many unique features to their religious devotions, some of which did not fit comfortably within the framework of major Christian denominations. One of these involved letters reputedly written by God himself – in German, with fraktur decoration – and sent to earth for the instruction of the faithful. These were known as “letters from heaven” or Himmelsbrief.

A much more common use of fraktur was for creating birth and baptismal certificates. Known as Geburts und Taufschein, these documents were required by the governments of the German states and the Holy Roman Empire to identify new-born children. The English colonies, especially in the frontier country, were much more slipshod with record keeping. But the Pennsylvania Germans maintained this Old World tradition in their new surroundings. 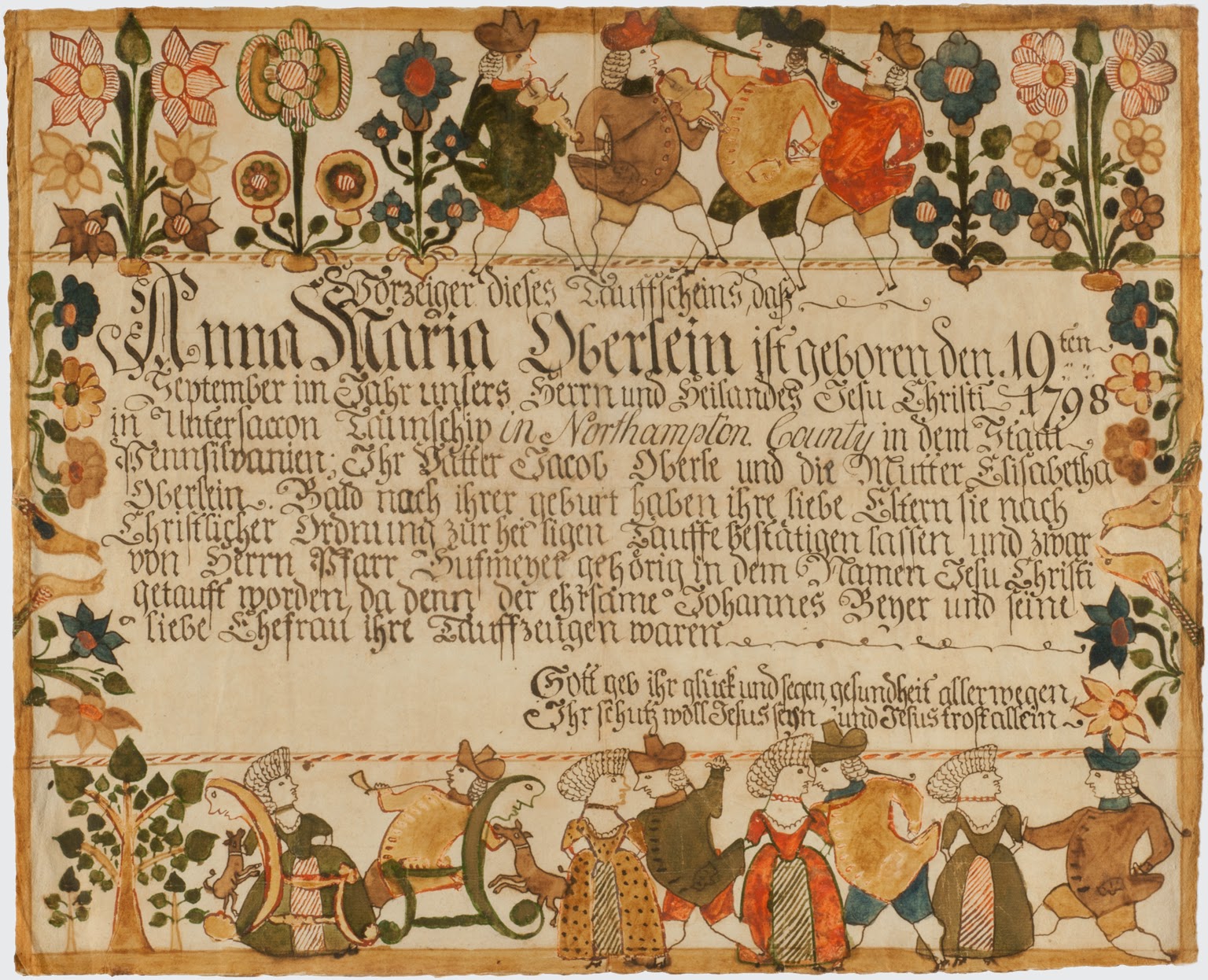 A particularly good example of this form of fraktur in the Johnson Collection is the Birth and Baptismal Certificate for Anna Maria Oberle. Created around 1798, the certificate is believed to have been the work of Johannes Ernst Spangenberg, (c. 1755 ‑ 1814).

In this document, the September 19, 1798 birth of Anna Maria Oberle in Northhampton County, Pennsylvania, is duly noted. Spangenberg depicted well-dressed couples, accompanied by musicians and leaping dogs, celebrating the event. In a particularly evocative touch, he portrayed a man and woman, perhaps baby Anna Maria's parents, relaxing in chairs decorated with human faces.

The festivities at the bottom of the certificate appear under a blessing invoked for Anna  Maria's future welfare. This charming expression rhymes in the original German:

A particularly interesting feature of this blessing is that it was used a decade earlier in another birth and baptismal certificate that was almost certainly the work of Johannes Spangenberg. The Metropolitan Museum of Art has this fraktur work in its collection. It documents the birth of Cathrina Seiffert, July 10, 1789, also in Northampton County, Pennsylvania.

Note how the Gluck und segen blessings are placed within heart motif designs in the Metropolitan Museum piece. Fraktur artists like Spangenberg may have utilized standard blessings and iconography. But one of the most significant features of fraktur was its emphasis on the individuality of the person being celebrated.

Fraktur continued to be created up until the era of World War II, by which time museums and private collectors began to acquire it for their collections. During the nineteenth century, the distinctive Germanic "old world" traits of fraktur gradually gave way to include some American themes. However, there was never a chance of mistaking the Pennsylvania German origins of the fraktur artists.

The Johnson collection, which has been generously pledged to the Philadelphia Museum of Art, contains several works by the Sussel‑Washington Artist. A particular motif of this anonymous creator involved equestrian portraits of colonial gentlemen and ladies. They are sometimes identified with "Genneral Waschington" and his wife. One suspects that nobody, then or since, ever thought that Martha Washington ever looked like the red-cheeked rider below. 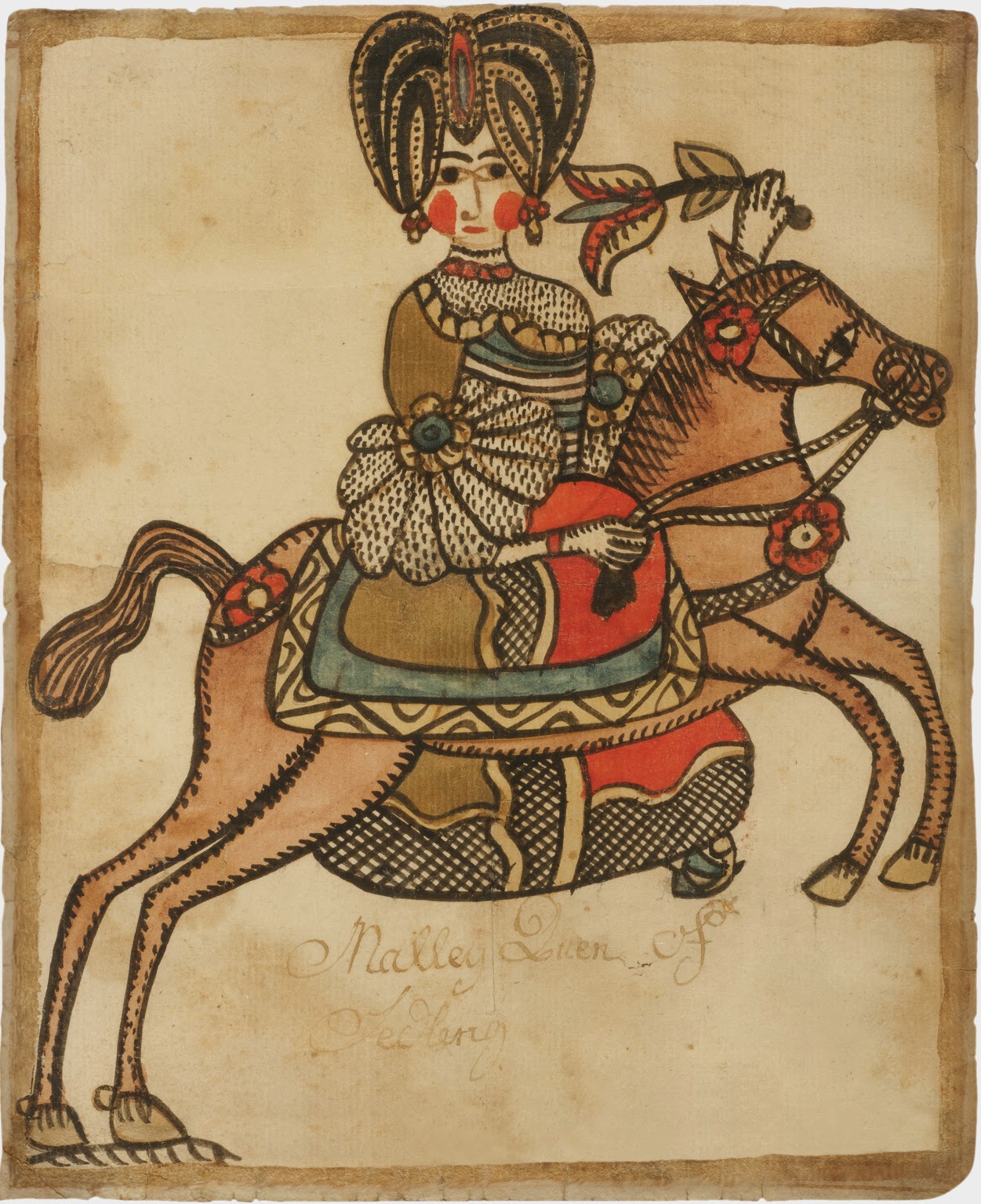 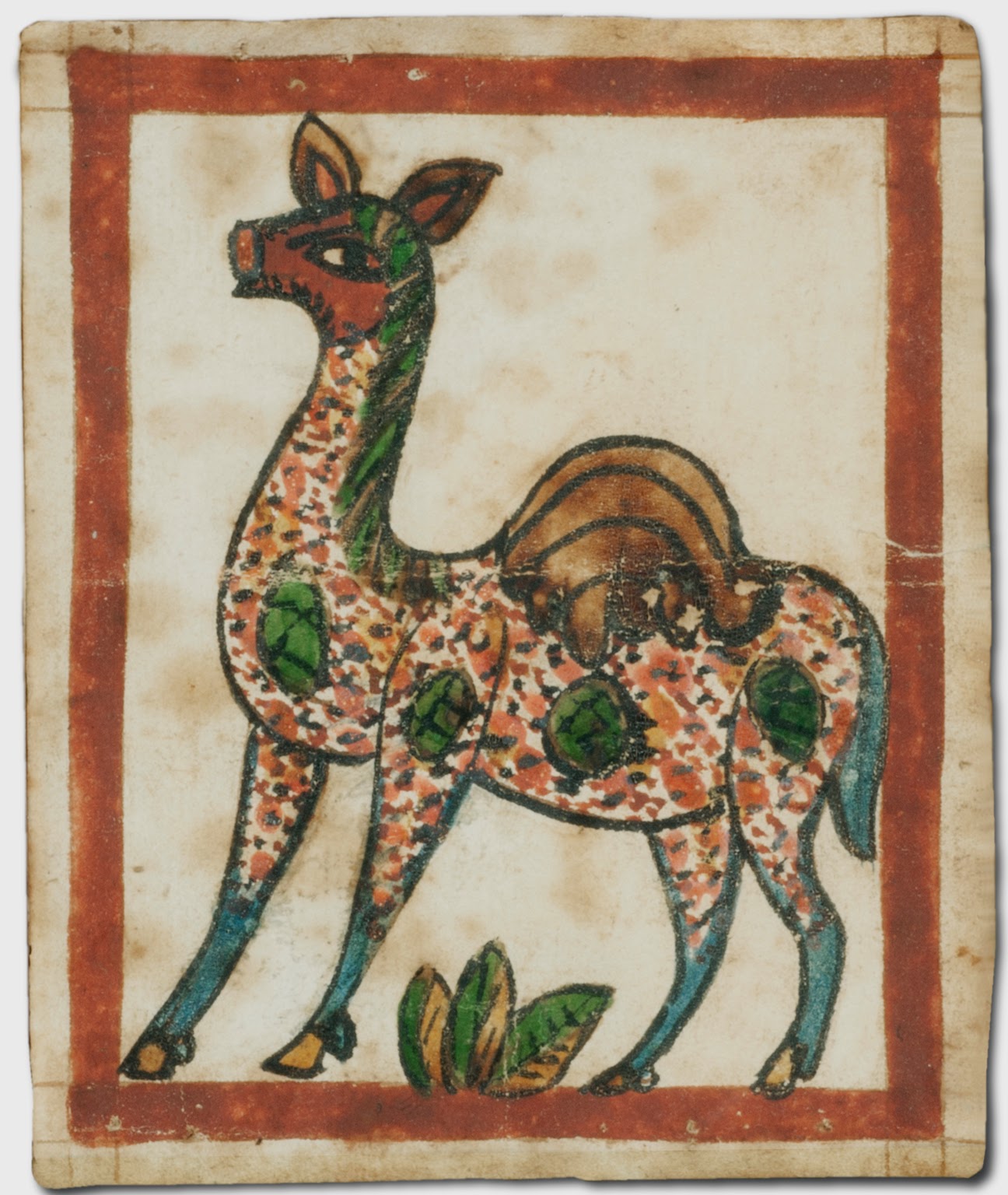 The Sussel-Washington artist chose to make the outward reality of life in America conform to the inner vision which he (or she) shared with other fraktur artists. This is not just a matter of personal preference or an early version of "my way." Instead, beneath the surface of this cheerful creature, there is a very powerful life-force at work.

The Pennsylvania German artists who developed fraktur over the course of two centuries can thus be recognized as pioneers of a multi-ethnic society where art can be created from many points of view and be appreciated and cherished by all.

Images Courtesy of the Philadelphia Museum Art and the Metropolitan Museum of Art, New York City.

Posted by Art Eyewitness at 6:20 PM