Sargent: Portraits of Artists and Friends at the Metropolitan Museum of Art 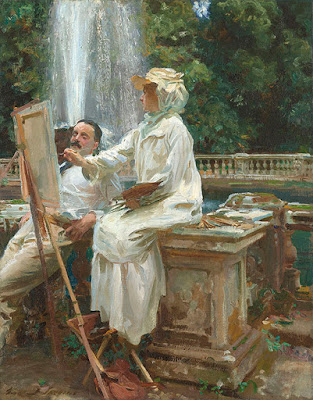 Sargent: Portraits of Artists and Friends

In 1889, the members of the Players Club in New York decided to commission a portrait of the club's founder, the great actor, Edwin Booth. The Players Club members wanted a painter whose skill would match the world-renown of their "leading man."

The portrait of Edwin Booth which Sargent painted is on display in the Metropolitan Museum of Art's exhibit, Sargent: Portraits of Artists and Friends (June 30–October 4, 2015). Sargent's Edwin Booth is a tour de force in scale and skill. It captures Booth's strength of character but also his inner torment. Booth, a staunch Union supporter during the Civil War, was the brother of the man who murdered President Lincoln, John Wilkes Booth. 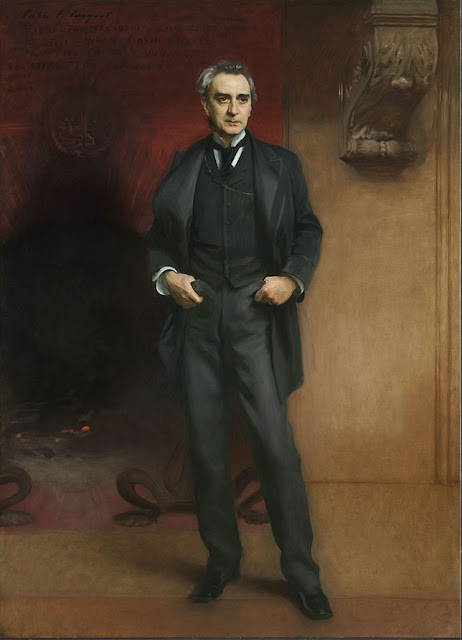 Edwin Booth, finished in 1890 and installed in the New York City club for actors, has an important distinction from the other paintings in the impressive exhibition at the Metropolitan. It was a commissioned work as we just saw. It is a portrait of the kind that made Sargent a wealthy man.

Most of the other works on view at the Met were created because Sargent wanted to do so. He painted or drew these works of art for reasons that were creatively and personally satisfying.

Sargent's Edwin Booth is a "swagger portrait." The term refers  to the full-length portraits of the English aristocracy painted by Anthony van Dyke during the 1600's and by Thomas Gainsborough in the 1700's. Edwin Booth had little "swagger" left in him by the time Sargent painted him, but Madame Pierre Gautreau possessed it in abundance. Fascinated by the haughty beauty from Louisiana, Sargent painted her, without commission, in Paris in 1883–84. 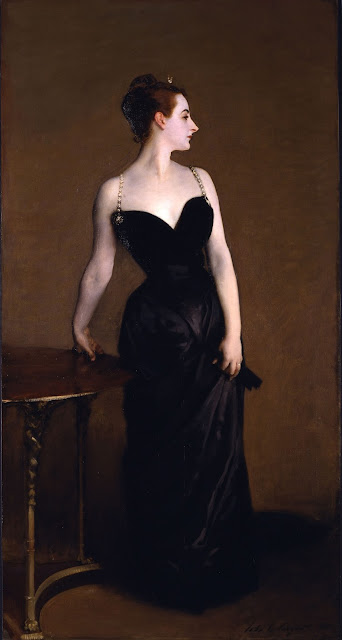 When first exhibited, Madame X shocked Parisian society. Sargent showed the right-hand strap of her gown slipping down to reveal a glistening bare shoulder. This was a step too far for a society that made discretion the first of the "rules of the game." The resulting notoriety and criticism verged on hysteria, forcing Sargent to relocate his studio from Paris to London.

Although not portrait of a friend, Madame X became a talisman for Sargent. He kept it in his studio for prospective clients to study - with shoulder strap properly readjusted. He eventually sold it to the Metropolitan Museum of Art in 1916.

The art critics in London proved hardly more enlightened  than their counterparts in Paris. When Sargent exhibited an innovative group portrait of three sisters, The Misses Vickers, it met with mixed reviews.  The Times regarded The Misses Vickers as "at once very bold and very subtle..." The Pall Mall Gazette, however, took a poll in 1885 which voted it the worst picture of the year.

Sargent's success in the "damn'd face business," as his predecessor Thomas Gainsborough peevishly called portrait painting, made him into a man of paradox. No artist of his time was better at portraying people as they wished to be seen. Sargent was also motivated by a sense of personal vision – and inner need – to depict the world as he saw it. 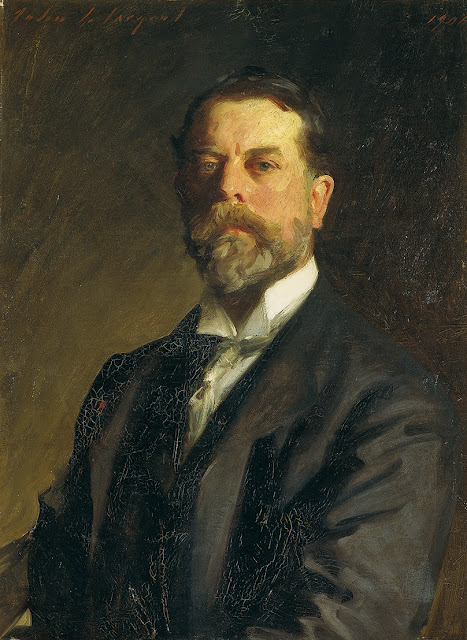 Sargent mastered every technique of painting: brilliant characterization in portraiture, Impressionism when painting landscapes and Renaissance-style symbolism for the murals he created, late in life, for the Boston Public Library. There was nothing that Sargent could not do. But a palpable sense of yearning pervades the Metropolitan exhibit. Looking at these magnificent works of art, it seems beyond doubt that Sargent was fixated on what was just beyond the reach of his paint brush.

Sargent spent a considerable part of each year touring scenic locations in Europe and North America with a band of kindred spirits. The signature illustration of Sargent: Portraits of Artists and Friends shows two of Sargent's artist friends, Wilfred de Glehn  (1870-1951) and his wife, Jane de Glehn (1873–1961). They are painting and relaxing at the Villa Torlonia in Frascati, Italy. It was during such happy, rewarding intervals that Sargent searched for his artistic muse.

The cast of Sargent: Portraits of Artists and Friends is a veritable Who's Who of the Victorian and Edwardian eras. On the walls of Sargent exhibit are such worthies as Henry James, Auguste Rodin, Isabella Stewart Gardiner, Claude Monet and Robert Louis Stevenson.

Sargent also painted a magnificent portrait of the leading lady of the stage in the Anglo-American world, Ellen Terry. Sargent's Ellen Terry as Lady Macbeth is such an astonishing portrait that I will be writing about it in an upcoming focus essay. 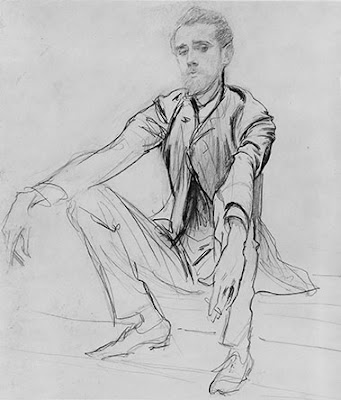 Less famous today than these "eminent Victorians” was Paul César Helleu (1859–1927). Helleu, a gifted artist especially noted for his pastel and drypoint portraits, was Sargent's boon companion. Sargent insisted on paying a thousand francs for a sketch that the hard-up Helleu had offered as a gift. Helleu never forgot this generous act. He went on to design the glittering starry sky mural for the ceiling of Grand Central Station in New York City.

Sargent painted Helleu at work en plein air in the English country-side in 1889. This is a particularly bold picture. Helleu's face is obscured, deliberately creating the image of an artist so absorbed in his work that his identity is at one with the landscape he is painting. The red canoe points to the greater world beyond the scene that Helleu paints on his easel, propped-up with a fishing pole. 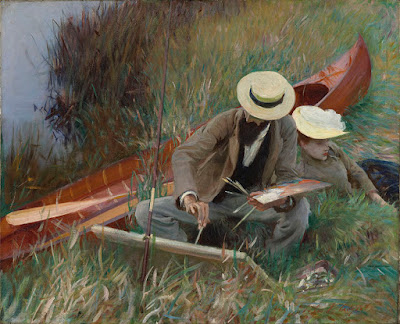 The face of Helleu's wife, Alice, is not obscured. She looks lost-in-thought, as well an artist's wife might be. The frank naturalism of her expression is absolutely key to understanding Sargent's work beyond the walls of his studio. He was not only relaxing from the supercharged atmosphere of commissioned portraits. He also relaxed his professional artifice, recording people in real life situations rather than carefully-orchestrated poses.

Sargent never relaxed his gaze. This was especially true in his portraits of children. Sargent's first great critical success, Carnation, Lily, Lily, Rose showed the idyllic side of childhood, as does Garden Study of the Vickers Children. This is the world of children as viewed by adults. 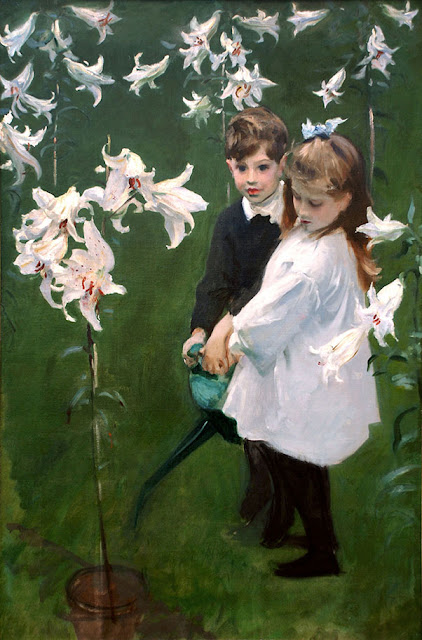 With The Pailleron Children or Portrait of Édouard and Marie-Louise Pailleron, Sargent peered directly into the realm of children with the eyes of an artist.

Sentimentality is seldom a factor in the lives of children. There is not a hint of it in the way that Sargent presents the son and daughter of playwright, Édouard Pailleron. There is an invisible barrier separating them in Sargent's painting that existed in life.

Marie-Louise Pailleron became a celebrated novelist. She wrote a vivid (perhaps partly-fictionalized) account of the stormy painting sessions with Sargent. More significantly, she ignored her brother, Édouard, in her 1947 memoir, Le Paradis perdu, except to say that he was their grandmother's favorite. One look at the cold, self-possessed cast of Marie-Louise's eyes explains why.

Yet, I could not stop looking at Portrait of Édouard and Marie-Louise Pailleron and I returned several times during my visit to look at it. 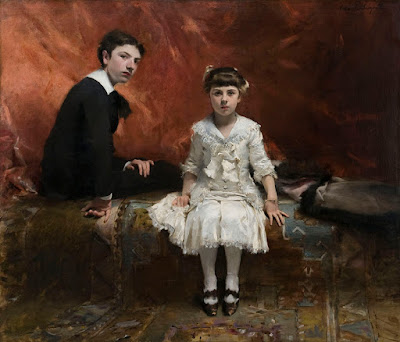 Portrait of Édouard and Marie-Louise Pailleron is displayed in the first gallery of the exhibit. It is hung on the gallery wall in such a way that it is the first picture that you really see.  This work casts a strange magnetic force attracting viewers and repelling the other, nearby, paintings by Sargent, including portraits of the Pailleron parents. These seemed like intruders. I did not come back a second and third time to this opening gallery to look at any one but young Édouard and Marie-Louise Pailleron.

As you study Sargent's double portrait, Marie-Louise Pailleron's personality becomes patently obvious. She is a self-centered and iron-willed person. She is also utterly devoid of pretense. You know it just looking at her and you can't but admire her, young as she was when Sargent painted her. Marie-Louise insists on being herself.

Sargent's brilliant characterization of Édouard Pailleron is less obvious due to the stage-stealing presence of Marie-Louise. But seldom have the conflicting elements of adolescence been handled with greater perception and empathy than in Édouard's portrait. The conflict of youthful attributes with burgeoning maturity, the presence of feminine elements in the male personality are very skillfully treated by Sargent.

Looking out from Sargent's canvas, the Pailleron children seem aware of the unresolved tensions and self-indulgent traits in us, the exhibition visitors. 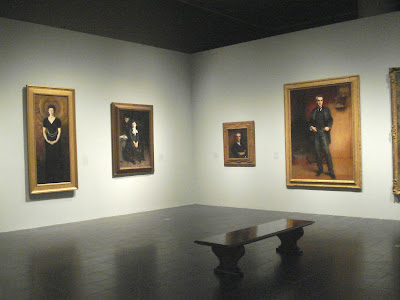 Anne Lloyd, View of the Sargent: Portraits of Artists and Friends galleries

When I go to art exhibits, I am frequently aware of a dialog between the protagonists, the people in the pictures, and the spectators. We who come to observe, end up being "observed" ourselves. There certainly was an ineffable presence, a real resonance of Sargent and his friends, in the galleries of the Metropolitan Museum of Art during my visit.

That feeling is especially present in Sargent's portrait of Vernon Lee. 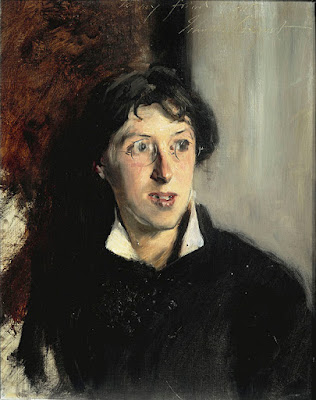 Vernon Lee was the pen name of Violet Paget, Sargent's childhood friend. The striking 1881 portrait, created in the revolutionary style of the Impressionists, was inscribed with her birth name. Violet Paget (1856-1935) was the child of English expatriate parents living in Italy who befriended Sargent's family, American "expats."

Perhaps the experience of a nomadic youth created a bond between Sargent and Lee which enabled them to appreciate the way that both challenged the norms of society in their work. Lee recorded her approval of this portrait, “mere dabs and blurs,” executed in a three-hour session. Along with essays on art, Lee wrote works of fantasy and supernatural stories, still widely read today.

Sargent and Lee evidently debated the existence of "otherworldly" elements, an unseen spirituality, that underpins great art. In an October 1897 letter, Sargent wrote to Lee that he agreed that under art “secretly is something else and something better – but this something else cannot be aimed at directly…”

Sargent was “at bottom a puritan” according to Lee and he refused to join in her ventures into psychology and spirituality. Instead, he poured much time, talent and dedication into the religion-themed Boston Library murals, an effort marked by criticism and controversy.

I don’t imagine that Sargent would agree, but I think that the works on view in the Metropolitan Museum exhibit succeed to a degree which his Boston murals failed to reach.

On display in Sargent: Portraits of Artists and Friends are likenesses of people long dead, yet still exuding the vibrant life force that propelled them to great heights of achievement. Sargent captured a real sense of the numinous, of the touch of God’s grace bestowed on these “artists and friends.”

Perhaps without realizing it, Sargent dipped his paint brush on a palette dabbed with immortality.