Art Eyewitness Review: The Work of Art by Anthea Callen 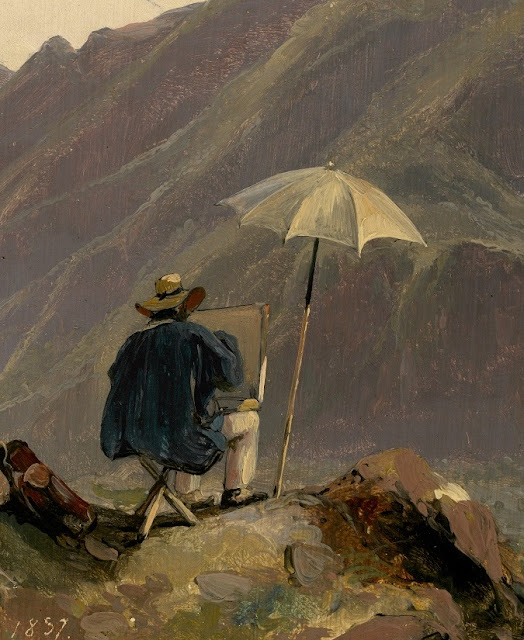 The Work of Art:

In 1841, an American painter named John Goffe Rand invented a now essential item in the artist's painting kit: the collapsible paint tube. Before Rand's pivotal creation, oil paint was chiefly sold in pigs bladders. These "vessies" were punctured and the paint squeezed out onto the artist's palette. It was a messy business, to say the least, and wasteful of paint since a pig's bladder is difficult to reseal.

Most modern-day art history books credit Rand's metallic tubes of paint with making possible the Impressionist art revolution of the 1870's. But the development of modern art cannot be simplified into an equation of new technology equals new art. A recent book, The Work of Art by Anthea Callen, brilliantly recounts a more complex - and fascinating - story.

Callen, a distinguished art scholar who taught at the Australian National University, presents the familiar story of Impressionism from a novel vantage point. Callen reaches back to the eighteenth and early nineteenth centuries to better appreciate the foundational precepts of Impressionism. Modern art, Callen affirms, is rooted in theories and technical developments predating Rand's paint tubes and the paintings of Monet, Degas and Renoir.

The full title of Callen's book needs to be quoted in full: The Work of Art: Plein-Air Painting and Artistic Identity in Nineteenth-Century France. It is a major addition to the literature of Impressionism, based on thorough research and a splendid narrative.

Along with insights into the origins of Impressionism, Callen plunges into the daily lives of these great painters to show how they defined themselves by virtue of their work. The Work of Art is indeed a book about the "elbow grease" needed to create great art. 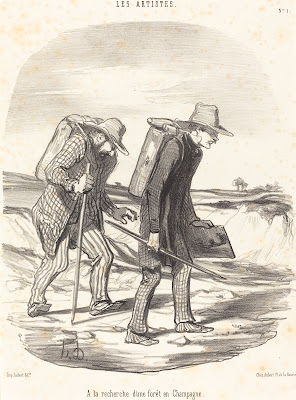 Honoré Daumier, In Search of a Forest in Champagne,1847

Among its abundant illustrations, Callen's book includes cartoons by Honoré Daumier poking fun at the landscape painters of his era. Daumier lampoons les paysagistes trudging along with their backpacks loaded with paint boxes, portable easels and umbrellas. But these men - and later Berthe Morisot - did need to deal with exposure to sun, wind and rain, as well as mastering the tools of the trade.

Sable brushes or hog bristle brushes - or English steel painting knives? A fine-grained canvas, sealed with glue and chalk and primed with white lead - or perhaps a course-grained canvas, fit for a mountain scene or a storm-tossed seascape.

And what about those new-fangled tin tubes? John Goffe Rand lacked the financial resources to capitalize on his invention. Marketed by commercial firms like Winsor and Newton, the tubes provided a bewildering choice of hues in oil and liquid water color.

Many of the tubes were filled with new concoctions like cadmium yellow. In 1852, a single tube of Winsor and Newton's cadmium yellow was priced at an astronomical five shillings. Yet cadmium yellow retained its luster longer than the old stand-by, chrome yellow, which often turned brown with age.

Far-seeing artists wrestled with these problems over the course of the nineteenth century.
Callen focuses especially on the lives and work of Gustave Courbet, Camille Pissarro and Paul Cézanne. She rounds-off her account of the Impressionists with a detailed examination of two works by Gustave Caillebotte and Berthe Morisot dealing with - of all things - the weekly laundry. 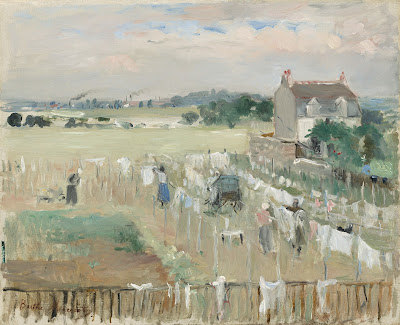 Berthe Morisot, Hanging the Laundry out to Dry, 1875

If you look closely at the horizon of Morisot's extraordinary painting, Hanging the Laundry Out to Dry, you'll notice plumes of smoke from factory furnaces. The Industrial Revolution was encroaching upon the age of Impressionism.

The artificiality of distinguishing between the Barbizon landscape painters of the 1840's and 50's and the Impressionists is one of the major insights of Callen's book. Barbizon painters like Théodore Rousseau and Jean-Baptiste-Camille Corot have long been known to have painted oil sketches from nature. These served as a preliminary step to works executed in the studio.

The legend of the Impressionists maintains that their works were created "au premier coup" in a single session straight from nature. Callen takes a closer look at the Impressionists' work and finds the reality a bit different:

Despite the apparent immediacy of Impressionist landscapes, scientific evidence as well as visual scrutiny of the paintings themselves confirm that studio reworking of plein-air 'impressions' into tableaux was as commonplace as among the Barbizon painters; the heyday of the quickly painted Impressionist oil-study-as finished-painting was essentially limited to the 1870's.

Callen further notes that Corot formally exhibited landscape studies during the 1840's just as the Impressionists did three decades later. In an amazing example of time-bending continuity, a plein-air landscape by Corot, painted around 1830, is juxtaposed in a two-page display with an unfinished work by Cézanne shortly before he died in 1906. 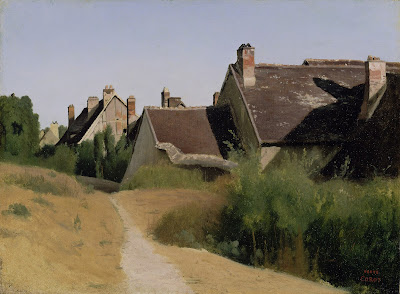 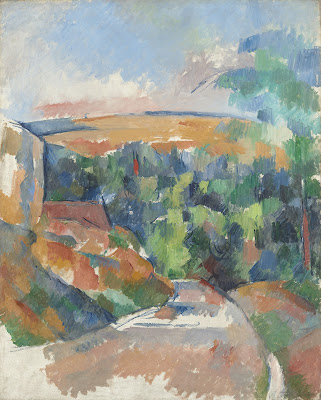 Even with the different treatment of sky and horizon in Cezanne's The Bend in the Road, we might well be looking at two works created side-by-side. Both Corot and Cézanne assert the ideals of Modernism. Parallel emphasis on geometric masses, similar sun-drenched color schemes and direct, unblinking appraisals of the vision field are manifest in both works.

The Barbizon painters and the Impressionists were called "Independents" before their respective nicknames gained universal acclaim. "Independent" signified more than a different approach to art from polished history paintings favored by the Academy of France. It was a political stance as well.

Courbet, a staunch left-wing militant, joined the Paris Commune in 1871, living in exile after it was suppressed by the Third Republic. Cézanne, less of a syndicalist than his painting partner, Pissarro, went into self-imposed exile when he returned home to Provence in 1885 to escape politicians and art critics alike.

One of the many remarkable features of Callen's book is the way she traces the politicized atmosphere of the French art scene back into the early eighteenth century. She shows that there was a surprising degree of interest in landscape painting and plein-air expeditions among French painters during the 1700's and the first decades of the 1800's. 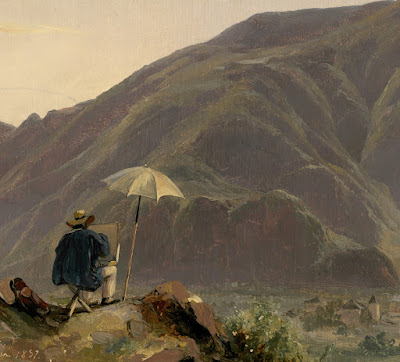 Jules Coignet, View of Bozen with a Painter,1837


As early as 1708, a French art theorist, Roger De Piles urged French artists to paint preliminary works and studies directly from nature. One of the most successful painters of the 1700's, Claude-Joseph Vernet openly defied the Academy's tradition-bound teaching which opposed working en plein-air. Vernet proclaimed:

Vernet enjoyed the patronage of the French government which funded a series of depictions of France's seaports. The Academy, however, remained resolutely committed to art in the classical, Italian style. 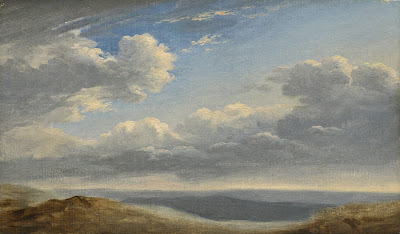 Pierre-Henri de Valenciennes (1750-1819) painted sky and cloud studies that rivaled those of John Constable in brilliance. Yet, significantly, these were created as preliminaries for views of Italy. Valenciennes, an influential teacher at the Academy, actually created a special scholarship in 1816 to send students to Italy in order to counter the "Dutch-style" naturalism exemplified in works like Constable's.

To shake the strangling grip of the Academy on French art required an artist with transcendent talent and matching arrogance. Gustave Courbet had plenty of both. Like Diego Rivera, Courbet was a man of insatiable appetites and a headstrong political warrior. He launched the assault on the Academy that the Impressionists carried to victory. 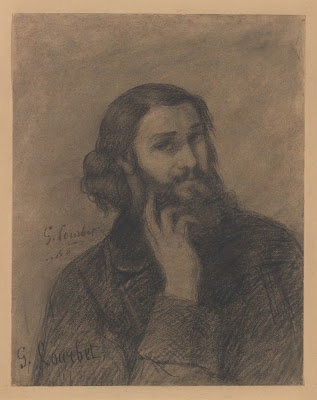 Courbet projected himself as an artist/artisan. Callen's analysis of Courbet's work methods is brilliant, especially of his extraordinary facility with the painting knife. Courbet often preferred painting knifes to brushes.  He used painting knives, including one shaped like a mason's trowel, to create images of everything from foaming waves to dappled leaves.

Pissarro and Cézanne both experimented with knife painting, especially during their joint expeditions in Pontoise during the 1870's. In some ways, this was a gesture of support for the exiled Courbet, down on his luck after the collapse of the Commune. Neither painter, however, tried to match Courbet's knife wielding panache. 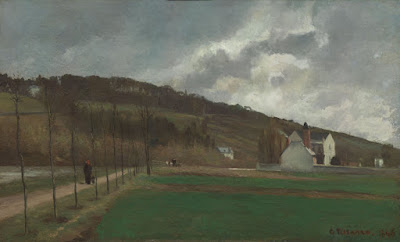 Camille Pissarro,The Banks of the Marne in Winter, 1866

Pissarro deftly used the painting knife, for instance, to create the gloomy, menacing sky in an earlier work, The Banks of the Marne in Winter. But he relied on brushwork to evoke the somber, barren ground.

By using the painting knife more sparingly, Pissarro and Cezanne saved themselves from some of the abuse hurled at Courbet. They certainly were subjected to many a critical barrage as it was.

Callen perceptively notes criticism from an unexpected quarter. It came not from a sarcastic right-wing journalist but from Charles Morice (1860-1919). A sensitive proponent of the Symbolist movement, Morice was a friend of Paul Gauguin and Paul Verlaine. Surveying the works of Pissarro and Cézanne, Morice objected to the lack of a higher moral content.

Morice, Callen notes, dismissed the realism of Pissarro, in which “the human figures, quite precisely have the same import as the vegetables beside them.” Cézanne, Morice likewise propounded “takes no more interest in a human face than an apple.”

Morice was a man of culture, much like Marcel Proust. He aimed to create a synthesis of metaphysics, human expression and the techniques of the modern novel. But he overshot his mark with Impressionism. He failed to grasp that the Impressionists were deeply committed to human values, especially the working lives of the people whom Pissarro had portrayed with "the same import as the vegetables beside them.” 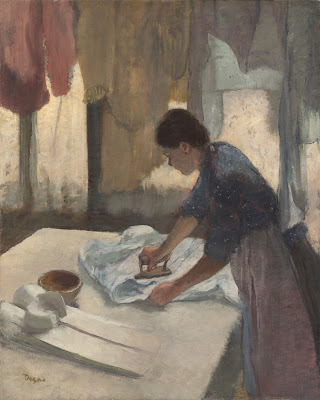 The importance to the Impressionists of work as an ideal cannot be overestimated. Degas' Woman Ironing, begun around 1876, but completed a decade later, shows the degree of emphasis which the Impressionists attached to this theme.

By emphasizing this identification of the human work ethic with the work entailed in art, Callen has made a vital contribution to the study of Impressionism. The question of artistic identity, achieved through dedicated labor, was an all-important aspect of the struggle to redefine French social identity - and art - during the age of Impressionism.

Cézanne took his own advice. He worked. He painted. And in so doing, Cézanne launched the epic investigation of the nature of perception that is Modern Art.

Images courtesy of the  National Gallery of Art, Washington D.C., the Metropolitan Museum of Art,  the Art Institute of Chicago, the J. Paul Getty Museum, Los Angeles, and Winsor and Newton.

Posted by Art Eyewitness at 2:00 AM