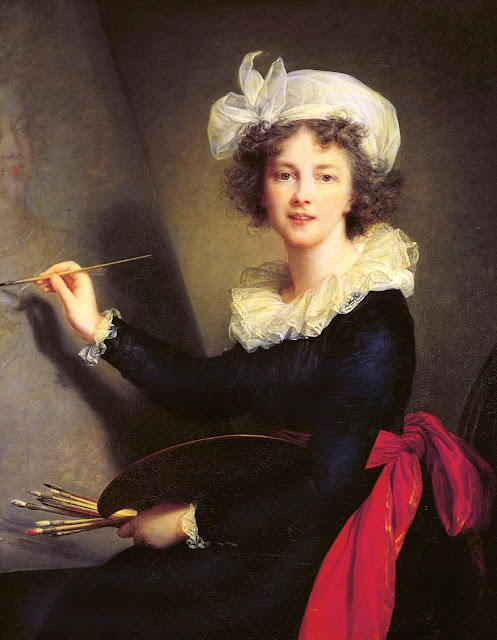 The Metropolitan Museum's splendid exhibition of the art of Elisabeth Louise Vigée Le Brun bears the title Woman Artist in Revolutionary France. This appraisal of the French eighteenth century painter is entirely appropriate. It is also open to interpretation.

Vigée Le Brun's life was defined by the French Revolution. She created sensitive portraits of Marie Antoinette that are supremely accomplished works of art. Her family portrait of Marie Antoinette and her children, shown for the first time ever in the United States, is a work of almost mythic stature. 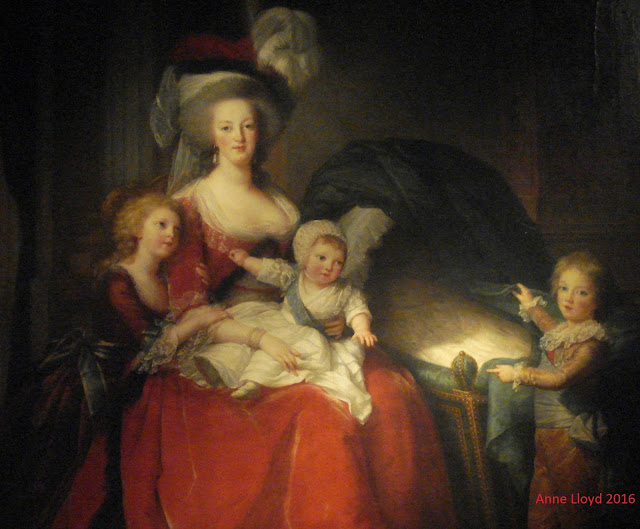 It is important to consider that Vigée Le Brun's portraits of Marie Antoinette were also propaganda ripostes designed to refute the vilification of the French queen as "Madame Déficit." However much we are impressed with these magnificent works today, Vigée Le Brun's evocations of royalty failed to stem the coming tide of revolution.

Vigée Le Brun, however, only witnessed the dramatic opening chapter of the French Revolution. The artist, an ardent supporter of the French royal government, fled France as soon as it appeared that the Ancien Régime was in serious danger.

As a refugee artist, Vigée Le Brun took her signature style to the courts of Europe. An immediate success wherever she traveled, she recreated the same feeling of beauty and informality in her portraits of the nobles and aristocrats of Russia, Austria and Italy.

The magnificent portrait, Countess Varvara Nikolayevna Golovina, was painted during Vigée Le Brun's sojourn in Russia, 1795-1801. It has all the hallmarks of her mature style, including the expert handling of a shaft of light in the background which figures in a number of other works on display in the Metropolitan Museum exhibit. 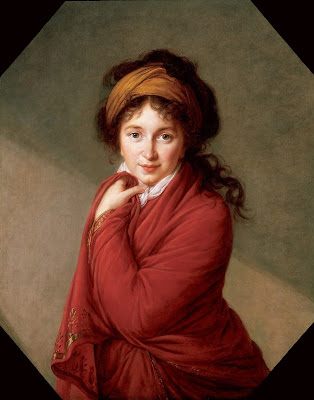 Beyond masterful technical details, Countess Golovina also exudes the charismatic individualism of the Romantic "rebellion" against the structure and formalities of early eighteenth century life and art. Vigée Le Brun's art, despite her political affinities, was part of the French Revolution's revolt against the eighteenth century. Bastille Day unleashed an upheaval of global proportions, enabling Vigée Le Brun to be called a Woman Artist in a Revolutionary World.

To be a woman artist in the eighteenth century was in itself a revolutionary act. It took a direct order of Louis XVI in 1783, however, to gain admission for Vigée Le Brun into the Académie Royale. With patronage like that, Vigée Le Brun might well have remained oblivious of the poitical storm clouds gathering over France in the 1780's - as were many of France's elite. Yet Vigée Le Brun's personal "radar" started detecting trouble only a short time after her entry into the Académie.

Writing about her life in extreme old age, Vigée Le Brun recounted many ominous incidents well before the fall of the Bastille in July 1789. It did not take much to convince her   to flee - and she would not be dissuaded. A friend and fellow artist, Rosalie Filleul, to whom she had confided her decision to escape, urged her to reconsider:

" You are wrong to leave. I will stay, because I believe in the happiness which the Revolution will bring us."

Mme Filleul was later arrested and beheaded by the "national razor," the dreaded guillotine in July 1794. Vigée Le Brun kept her head on her shoulders, living until 1842.

For a dozen years after 1789, Vigée Le Brun traveled to Italy, Austria, Germany, Russia and Great Britain. She supported herself and her daughter by painting portraits of European royalty and aristocrats. As she charmed her way into the glittering courts of Europe, the armies of the French Republic stormed across the continent as if in hot pursuit of Marie Antoinette's favorite artist.

It was never as personal at that, of course. But Vigée Le Brun stood for everything that the "Citizens," as the French revolutionaries called themselves, condemned. Instead of Liberté, Equalité, Fraternité, Vigée Le Brun's art espoused Beauté, Noblesse, Fidélité. 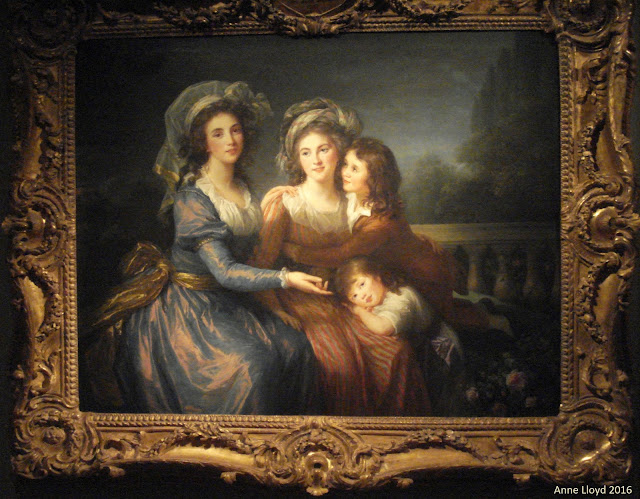 Vigée Le Brun lived these ideals as well as depicting them on canvas and wooden panels. A handsome, charming young woman, she found a place for herself in Marie Antoinette's court circle as if she were born for the role.

The ladies-in-waiting at the French court rose - and fell - in the French queen's favor by their ability to carry themselves with poise and natural-seeming beauty. The alluring Yolande de Polignac ousted the rather plain Princesse de Lamballe as Marie Antoinette's favorite in 1774.

Vigée Le Brun painted a number of portraits of the Duchesse de Polignac and it is not difficult to account for her rapid rise in Marie Antoinette's inner circle. 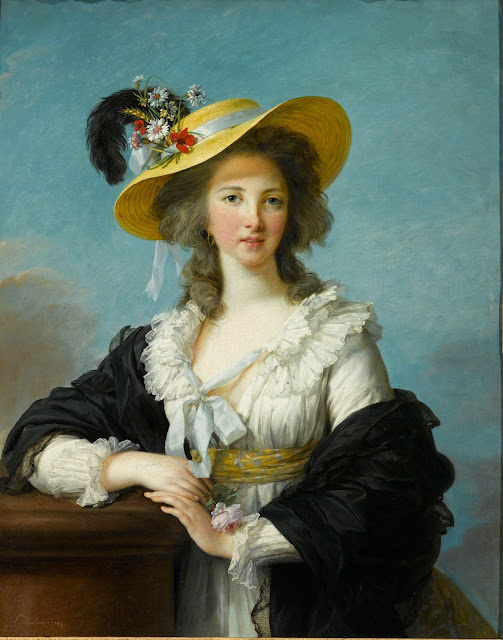 It is worthy of note that Princesse de Lamballe overlooked the slight and remained loyal to Marie Antoinette. She too was painted by Vigée Le Brun but this portrait is not in the Metropolitan exhibit. Perhaps, it is just as well. When a Revolutionary tribunal in 1792 demanded that Princesse de Lamballe condemn the French monarchy, she refused and was handed over to the mob. She was promptly hacked to pieces. Her severed head was placed on a pike and paraded around the streets of Paris.

Such gruesome events were unimaginable when Vigée Le Brun first came to Versailles in 1778. She  succeeded so  quickly and brilliantly from a social standpoint that it is easy to overlook the exceptional level of artistic accomplishment that she displayed from the moment she arrived at the French court.

Vigée Le Brun's father was an artist specializing in pastel drawing, which enjoyed something of golden age during the eighteenth century. He imparted much of his knowledge to his gifted daughter but he died when she was just gaining maturity, at age twelve. Vigée Le Brun received no support from her step-father, whom she detested, and within a few years was working on her own.

It is encouraging to note that the young, virtually self-taught Vigée Le Brun was not entirely without support among the male establishment of the French art world. One of the greatest French artists of the pre-Revolutionary period, Joseph Vernet, recognized her talent and encouraged her to continue her efforts. Vigée Le Brun responded with a  supremely accomplished portrait of Vernet, executed when she was only twenty-three. 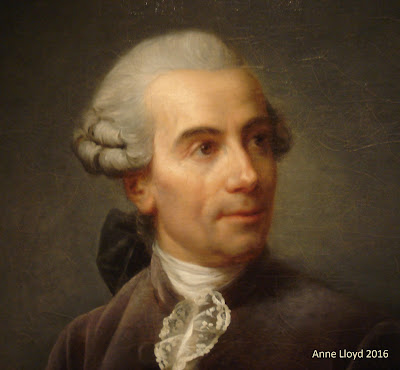 The portrait of Vernet proved that Vigée Le Brun could paint more than pretty faces. Yet, her talent and dedication could not entirely compensate for the obstacles which she faced as a woman artist. Without access to formal training, which denied her life classes, Vigée Le Brun's range was somewhat restricted. She tended to depict her subjects sitting down or from the waste-up. Vigée Le Brun put the literary adage of "write what you know" into her artistic practice.

Vigée Le Brun "knew" heads, hands and torsos to perfection. She was a master at depicting the "feel" of fabrics. She expertly modeled the clothing of her subjects, whether it was the tightly-fitting court costume or the loose-fitting chemise that Marie Antoinette so loved to wear at her rustic retreat, the Petit Trianon.

An excellent example of Vigée Le Brun's consummate handling of figure and garb is her portrait, Baronne de Crussol Florensac. This work was exhibited at the 1785 Salon. It depicts the music-loving protagonist in an unconventional posture, wheeling around to greet the viewer. 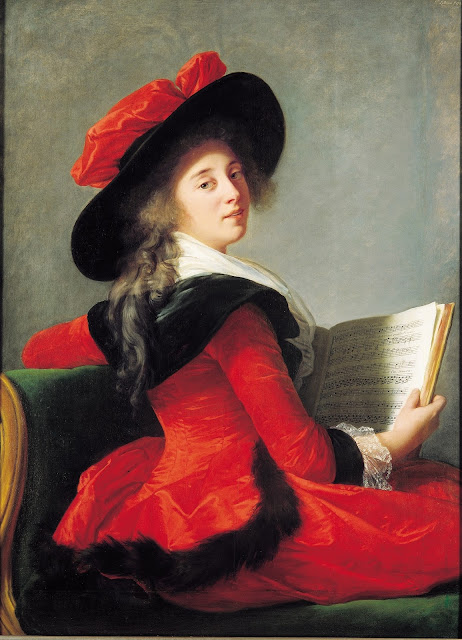 The arching back of Baronne de Crussol Florensac shows the upward reach of the seams of her red garment contrasted with the horizontal stretch of the fabric, as she turns to greet us. It is an easily missed detail, but a crucial one for it shows that there is a living, moving body inhabiting those elegant garments.

In the 1785 Salon, Vigée Le Brun also exhibited her portrait of Charles Alexandre, vicomte de Calonne. It was a vivid demonstration of her ability to create an indelible image of a male, as opposed to a female, figure. Like most of Vigée Le Brun's protagonists, Calonne engages viewers directly with a pair of sparkling, if bemused, eyes. His hands are superbly articulated, another trademark of Vigée Le Brun. 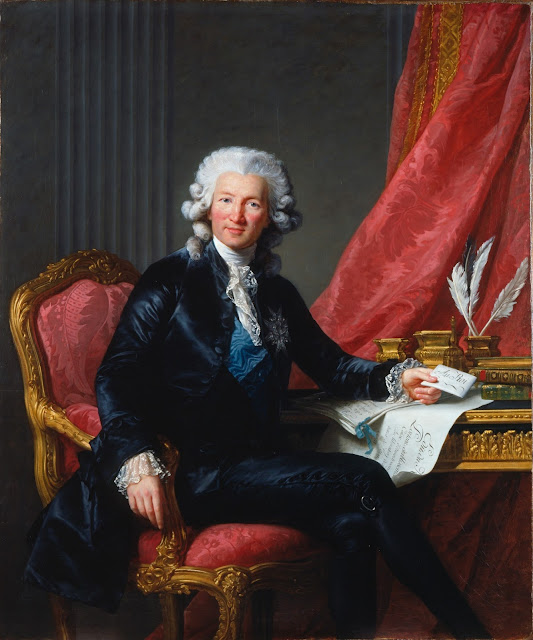 In one of Calonne's hands, we see a note addressed to the King of France. Calonne was the royal finance minister, an unenviable post in the bankrupt France of 1785. 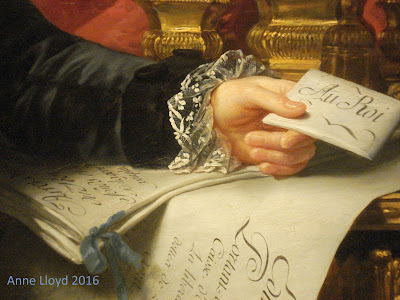 
The association of Vigée Le Brun with Monsieur Déficit as Calonne was called, as well as with Madame Déficit (Marie Antoinette) goes a long way to explain her seemingly rash decision to leave France soon after the outbreak of the Revolution and well before "the Terror."

During the escalating crisis of the 1780's, France was swept with a flood of salacious and libelous gossip about the French royal family and the court circle. Just as Marie Antoinette was the target of vicious calumny detailing lesbian affairs with the Duchesse de Polignac, so Vigée Le Brun was slandered for having a sexual affair with Calonne during the time that he sat for his portrait. No one among France's elite was exempt from vilification.

France's Age of Revolution was the first event in world history where women played a major role en masse on the central stage of the drama. Not merely as an "incidental" heroine like Joan of Arc or as mute, long-suffering victims of male aggression - French women were among the prime movers of the Revolution.

French women were also among the most prominent victims of "the Terror."

Elisabeth Louise Vigée Le Brun survived and so too did Adélaïde Labille-Guiard (1749-1803).  Labille-Guiard was a gifted painter, inducted into the Académie Royale in 1783 at the same  time as Vigée Le Brun. Given the vicious invective of the 1780's, it was inevitable that the two women artists - there were only four women in the Académie Royale - came to be viewed as "bitter" rivals. There is no documentary evidence of bitterness between them.

Labille-Guiard was the favored artist of the royal aunts of Louis XVI, Madame Adélaïde de France and Madame Victoire de France. These formidable ladies were no friends of Marie Antoinette. Vigée Le Brun later painted them while in exile in Italy. Both pictures are displayed in the Metropolitan exhibit, close - ironically - to a portrait of Marie Antoinette. It is unlikely that either Vigée Le Brun or Labille-Guiard were part of the warring camps at Versailles.

More significant is the fact that Labille-Guiard stayed in France after Vigée Le Brun's escape. But the price of her survival during the Terror was to burn a number of her paintings on the orders of the French Revolutionary government.

This points out the unpleasant reality of being a Woman Artist in Revolutionary France as the title of the Metropolitan exhibit proclaims.

Once the French Revolution was secured, the participation of women was no longer needed and their legal status reverted to second-class "citizeness." It did not matter that Olympe de Gouges was a passionate Republican and an enlightened abolitionist. Her head suffered the same fate as did that of the courageous Royalist, Princesse de Lamballe. 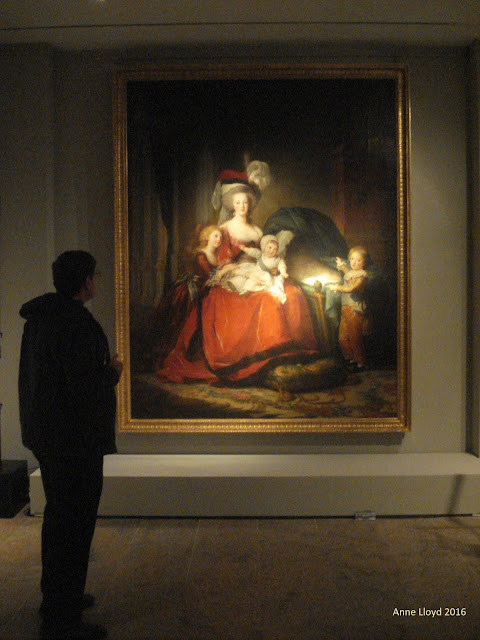 Adélaïde Labille-Guiard saved her life by denying her art. Elisabeth Louise Vigée Le Brun preserved her life and her artistic independence by fleeing from her country. When she eventually returned to France, under the rule of Napoleon, male hegemony in art, as in politics, was complete. Only one major commission was awarded her, a portrait of Napoleon's sister, Caroline, wife of Marshal Murat. Save for an occasional portrait later in life, Vigée Le Brun's career was virtually over.

Only with the rise of Impressionism, when avant-garde art cut its ties with the establishment, were women artists truly able to assert themselves. Berthe Morisot, Mary Cassatt, Suzanne Valedon and others were able to make a place for themselves in the world of art without regard for quotas on the number of female artists in the Académie or other arbitrary barriers.

That Morisot and Cassatt did so was due in part because they could walk in the footsteps of Elisabeth Louise Vigée Le Brun.