International Pop at the Philadelphia Museum of Art 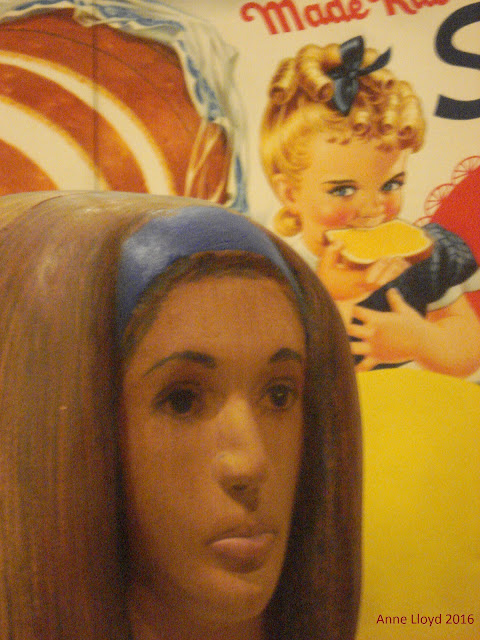 Pop Art, like most of the cultural innovations of the 1960's, took a lot of people by surprise. In some cases, it came as a  revelation. For others it was a shock.

The lively and informative exhibition at the Philadelphia Museum of Art, International Pop summons this tumultuous era to life. "I Pop" provides insight into the emergence of Pop at a time when representational art in the West was considered passé.

To many sophisticated art scholars around 1960, anything approaching realism was considered "illustration." It was acceptable on the covers of magazines. It was not art.

Pop Art changed that situation  - radically. Abstract Expressionism, the canonized art form of 1950's America, was suddenly dethroned. The flowering of primary colors, figurative depiction and references to mass media in Pop took the world by storm. Many, like the influential art critic, Harold Rosenberg, were not pleased. 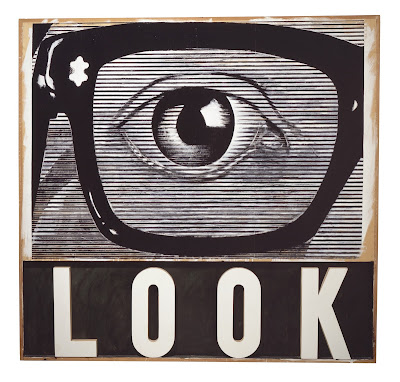 Pop Art, declared Rosenberg, was like "a joke without humor, told over and over again until it begins to sound like a threat..."

Rosenberg's assessment was wide of the mark and yet closer to the truth than he perhaps realized. There was plenty of humor to Pop Art. But the "threat" was real too. It lurked not in the themes and techniques of the practitioners of Pop Art but rather in what they perceived was happening in the world around them.

Examples of the upbeat Pop Art of the early 1960's are well represented in the galleries of International Pop. Roy Lichtenstein's clever parody of Disney cartoon characters, Look Mickey, is a notable work of" populist" Pop. There is also Gerhard Richter's Woman Descending the Staircase, an apparent homage to one of the most celebrated works in the Philadelphia Museum of Art, Marcel Duchamp's Nude Descending a Staircase.

It is easy to focus on these two major works in the spirit of art critic Lawrence Alloway's interpretation of Pop as "mass popular art."  Perhaps it is too easy. 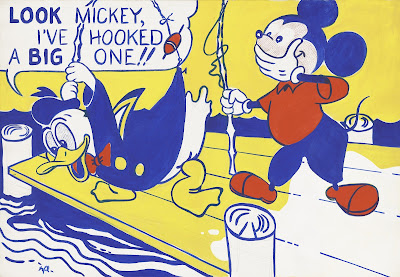 In Look Mickey, Lichtenstein "recomposed" a scene from a familiar Disney book, Donald Duck: Lost and Found. Lichtenstein's young sons were fans of Disney cartoons. By transforming the Little Golden Book illustrations into a comic-book format, replete with Benday dots, Lichtenstein created an image that would appeal to kids, parents and (hopefully) lovers of modern art.

In the case of Richter's 1965 "photo painting," the obvious reference to Duchamp's work was further reinforced the following year when he virtually re-staged Duchamp's 1912 work with a sensitive depiction of his wife in the role of Ema, Nude on a Staircase.

Yet, there was a seed of iconoclasm in both these early Pop works which would grow as the Pop movement spread. We need to look closely at both to grasp the implications for Pop Art as an international movement.

Only two years separated Look Mickey from the "blood and thunder" war scenes, Whaam! and Torpedo ...Los! which Lichtenstein based on early-60's DC Comics series, All-American Men of War and Our Fighting Forces. These garish depictions of combat present war as only a twelve year-old boy could applaud. Lichtenstein, a World War II veteran, surely intended subversive social commentary in these 1963 works - but cryptically refrained from providing any overt indicators. 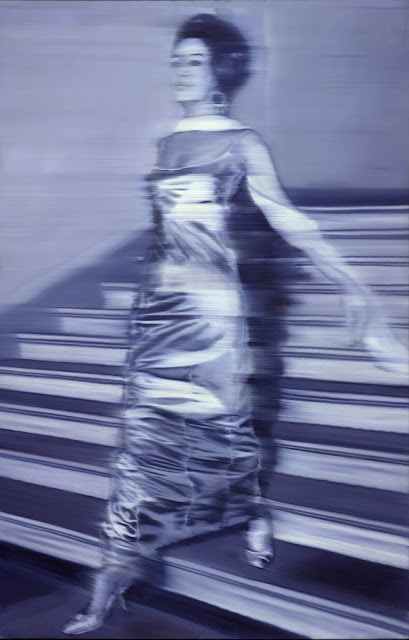 Richter's relationship to Duchamp is also problematical. In a 1991 interview, Richter declared that Duchamp's Nude Descending a Staircase "rather irritated me. I thought very highly of it, but I could never accept that it had put paid, once and for all, to a certain kind of painting."

That "certain kind of painting" was, of course, representational art. Richter turned the tables on Duchamp and transformed his abstract nude into a realist figure. Both of his re-stagings of the 1912 work, the elegantly dressed version on view in the Philadelphia exhibit and Ema, Nude on a Staircase, are defiant rejections of Duchamp.

Pop Art was often called NeoDada. Like the World War I era original, Pop/NeoDada turned the world upside down and inside out. What looks like a celebration of the good things of life might well be a cunning, satiric put-down of consumer society gluttony. 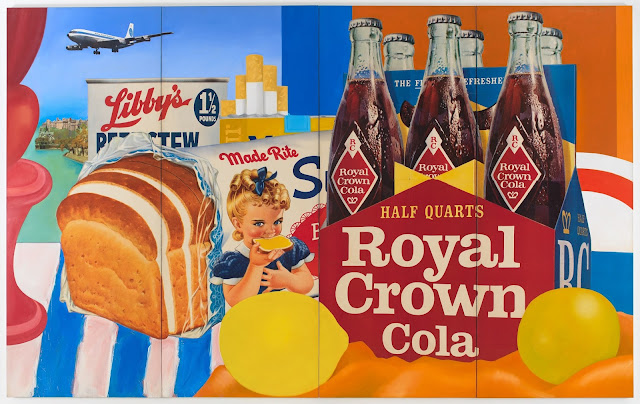 The vast Still Life #35 by Tom Wesselmann (1931-2004) certainly seems to be later-day Dada, skewering the insatiable appetites of the post-World War II era. The rather malevolent glint in the eyes of the Aryan-looking Sunbeam Bread girl is profoundly unsettling. 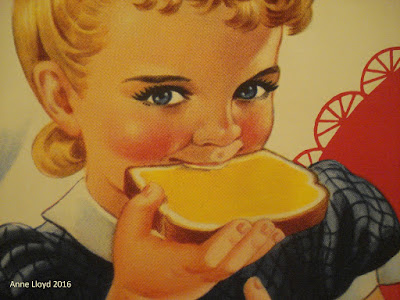 Tom Wesselmann, however, emphatically rejected such an interpretation of his work and always tried to distance himself from the Pop Art School.

"I used what was around me, so my culture was what I used," Wesselman declared. "But I didn’t use it for cultural reasons, it was not a cultural comment.”

Wesselman's artistic aims were to be upstaged by the impact of his paintings. Many other Pop artists would experience the same surprising reception of their art.

The Philadelphia exhibit is the third and final U.S.venue of International Pop, following displays in Minneapolis and Dallas. Tate Modern in London also presented a version,The World Goes Pop, during 2015. Different works by artists represented in The World Goes Pop appear in the American exhibition such as Oiran, one of the signature series by Japanese artist, Ushio Shinohara (b. 1932). 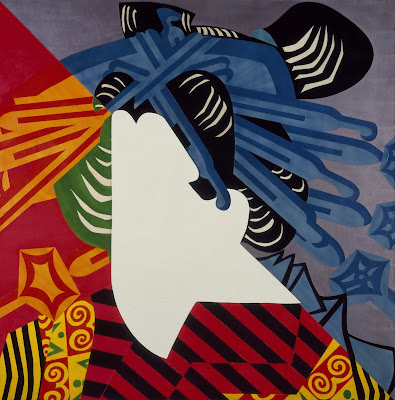 According to the standard history of Pop Art, this radical departure started in Britain and the United States during the 1950's as artists grappled with the explosion of product brands and the unprecedented marketing campaigns. Abstract Expressionism's cult of the obscure was left behind for big, bold and bright images of the profusion of goods and services of the post-war boom decades.

Interestingly, a painting on view by the British Pop pioneer, Richard Hamilton, has more elements of abstract theory and design than is generally accepted. Hers is a Lush Situation - the mystifying title comes from a Buick automobile review - distributes car parts over the canvas with almost Cubist precision. 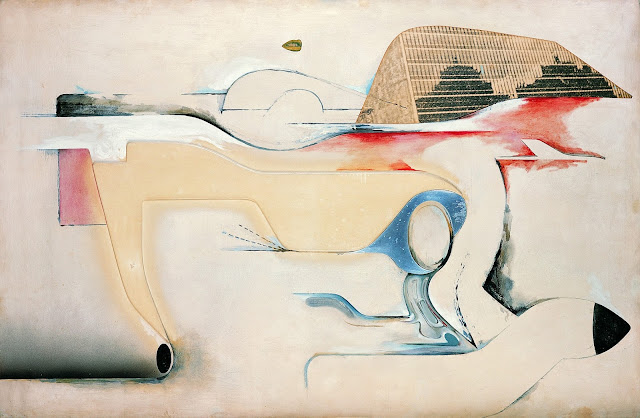 Richard Hamilton, Hers is a Lush Situation, 1958

The revolutionary Brazilian artist, Hélio Oiticica (1937-1980), also embraced Pop after exploring other art forms. He engaged in geometric and non-representational art forms early in his career. During in the 1960's, Oiticica launched ambitious efforts to create art that was evocative of Brazilian life and to break down the barriers between art, as a process of observation, and life as an active struggle to survive. Oiticica aimed to make art and life one and the same.

Pop art seemed ready-made for Oiticica and other Latin American artists. But Pop art to Latin American eyes was compromised by the U.S. counter-insurgency campaign against Communism.

In the United States and Western Europe, Pop art dealt with social themes, such as the way that life was being packaged into boxes, whether Andy Warhol's Brillo boxes or the "little boxes made of ticky tacky" of the Pete Seeger song. In Latin America, the "boxes" were coffins of martyred victims of political oppression and U.S. intervention. 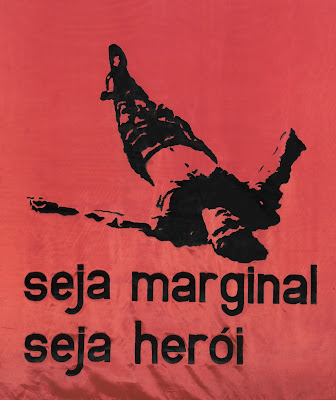 Oiticica's Christlike image of a dead rebel was created the same year as "Che" Guevara's death. It vividly illustrates the response of committed activists like the brilliant Brazilian artist for whom a work of art was a political manifesto first and foremost.

The 1960's was a revolutionary decade throughout the world. The curators of "I Pop" at the Philadelphia Museum created a brilliant timeline chart tracing the interrelated relationships of Pop art movements among the various nations and linking these developments in the arts with notable political events.

One of the 1960's most significant legacies, however, eluded the grasp of the curators of International Pop. This was the impact of the "Sixties" on the rise of the Feminist Movement of the 1970's.


To give due credit, a conscientious effort was made to include many significant women artists in the International Pop exhibit. Evelyne Axell (Belgian,1935-1972), Pauline Boty (English,1938-1966), Niki de Saint Phalle (French,1930–2002), Marjorie Strider (American, 1934-2014) and Jann Haworth, (American, born 1942) are all represented in the exhibit. Most of the works by these women engaged with feminist themes that were to be major topics during the 1970’s when women asserted control of “Our Bodies, Ourselves.”

These talented women artists are generally represented by only one piece in the exhibit and this is a major stumbling block. They are less well known than their male counterparts in Pop Art and thus more difficult to appraise on the strength of a single work of art.

Boty is an extreme case, but International Pop is generally short on insights into these remarkable women. In an otherwise cohesive exhibit, Axell, Boty and Strider seem to be latecomers to the "swinging 60's" rather than major artists in their own right and forerunners of the art of the 1970's Feminist Movement.

Fortunately, "I Pop" has two other major works of art that help assert the growing role of women in art and modern society. These are Dinner Date, the 1963 sculpture group by Marisol Escobar and Andy Warhols's Sixteen Jackies, created a year later. 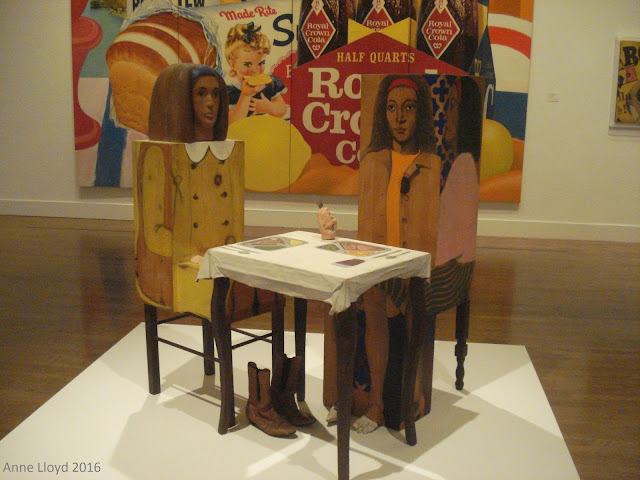 Marisol (as she was universally known) was born in France in 1930 of Venezuelan parents. She came to New York in the 1950's as a painter. Deeply impressed by pre-Columbian art, she launched a unique and unforgettable sculptural series incorporating either realistic portraits or mask-like representations (sometimes combinations of the two) on blocks of pine or mahogany, with disembodied hands, legs and feet to complete the unsettling effect.

Dinner Date, which is part of the collection of Yale University's art museum, is positioned close to Still Life #35 by Tom Wesselmann. These two works complement and counteract each other. Marisol's mute, rigid figures are poised to eat "TV dinners," the epitome of the processed foods extolled in Still Life #35.Their faces (which bear a resemblance to Marisol's own features) are gripped in a trance-like state, as frozen as the "TV dinners" they will never consume.

The artificial, emotion-drained world which Marisol evoked in Dinner Date came to an abrupt end on November 22, 1963.

Andy Warhol's Sixteen Jackies is a testament to the defining moment of the 1960's and the Pop era: the assassination pf President John F. Kennedy. Its significance is even wider. 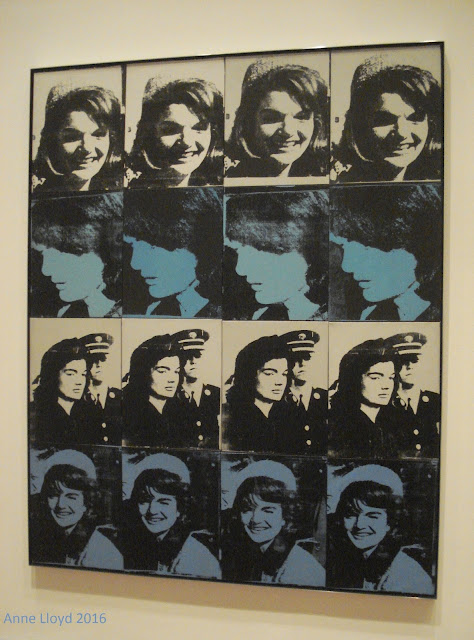 Warhol was strangely unmoved by the murder of Kennedy but very much aware of the significance of the event, as it transpired on television. Warhol's famous remark about the endless, repetitive broadcast of events in Dallas and the state funeral was both perceptive on the cultural level and incorrect in the instance of the role of Jacqueline Kennedy.

“The more you look at the same exact thing," Warhol later declared, "the more the meaning goes away and the better and emptier you feel.”

The ad nauseam stream of media images which is now part of daily life certainly proved Warhol right. In the case of the Kennedy events, however, that did not happen. The "grace under pressure" courage of Jacqueline Kennedy, watched by millions, invested this sad drama with a nobility lasting to this day. One can feel the numinous outpouring of her spirit, even now, standing before Warhol's Sixteen Jackies. 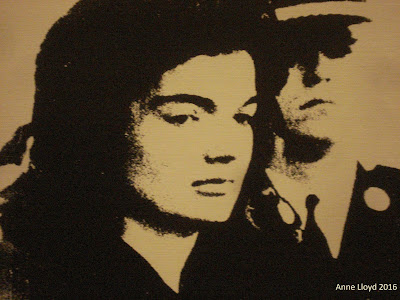 If Jacqueline Kennedy transformed a media circus into a moment of everlasting reconciliation, her example also marked a decisive shift in the role of women in the arts. The static place of women in society, so brilliantly skewered by Marisol's Dinner Date, was not going to continue, unquestioned, after Jacqueline Kennedy's strength of character was displayed to such an extraordinary extent.

The International Pop exhibit, now on view in Philadelphia, deftly contradicts Andy Warhol's "fifteen minutes of fame" dictum. Some images and the people they portray take on a life of their own. By virtue of the insight and inspiration they provide, these images become indelible, marked forever in the human mind and soul.

Images courtesy of the Philadelphia Museum of Art

Posted by Art Eyewitness at 7:18 AM