Picasso: The Great War, Experimentation and Change at the Barnes Foundation 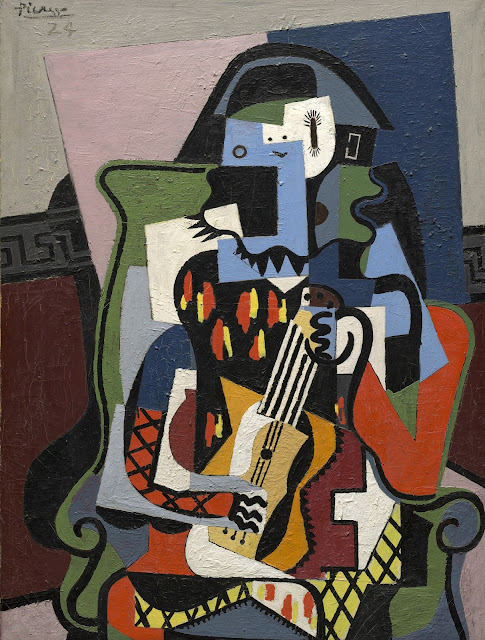 The First World War entered its first full year in January 1915. Gone was the nearly universal belief of August 1914 that the war would be a short and glorious campaign.

To mark the occasion of the grim New Year of 1915, the French Minister of War, Alexandre Millerand, declared, "There are no more workers' rights, no more social laws. There is nothing now but war."

A world defined by mass, industrialized slaughter was the setting for Pablo Picasso's Great War years. The decade between 1914 to 1924 witnessed a career-changing shift from Picasso's "periods" and his dedicated allegiance to Cubism toward a restless, multi-faceted approach to art that would continue for the rest of his life.

Picasso: The Great War, Experimentation and Change brilliantly explores this time of transformation in Picasso's art. This major exhibit is now on view at the Barnes Foundation in Philadelphia. It will appear at the Columbus Museum of Art in Ohio later in June 2016.

One of the signature works in the Picasso: The Great War exhibit is a star of the Columbus Museum's collection. This is Still Life with Compote and Glass,1914–15, which Picasso painted around the time of Alexandre Millerand's "nothing now but war" chant. 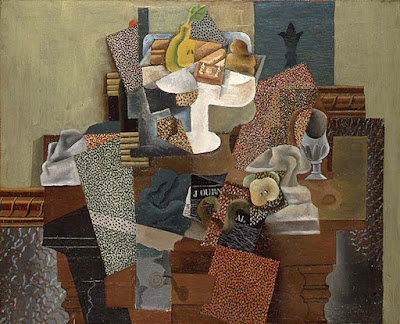 Still Life with Compote and Glass represents the apogee of pre-World War I Cubism. It combines the major elements of the two phases of Cubism. Here we can see the interlocking of geometric planes of Analytical Cubism combined with the enhanced use of color and concrete imagery in Synthetic Cubism. The contribution to Cubism of Picasso's Spanish countryman, Juan Gris, is apparent in the representational tone of this work. Still Life with Compote and Glass shows how Cubism would likely have developed had Europe not plunged into war in August 1914.

Europe did go mad and Picasso could only paint Still Life with Compote and Glass because he was a Spanish neutral. He did not have to dodge bullets and shrapnel like his Cubist compatriot, Georges Braques, who was seriously wounded in 1915.

Picasso later defended his greatest work, Guernica, declaring that painting "is an instrument of war against brutality and darkness."

The art works presented in the Picasso: The Great War exhibit may not be overtly anti-war like Guernica. But the masterpieces on view at the Barnes certainly attest to Picasso's creative and compassionate response to Millerand's "nothing now but war" proclamation.

Cubism joined the casualty list of the Great War, seriously wounded if not killed. The Barnes exhibit includes a provocative short film which explores how the French government during World War I viewed Cubism as subversive and unpatriotic.

This bizarre theory was based, at least superficially, on the fact that German art enthusiasts were among the first to embrace Cubism. The German-born Daniel-Henry Kahnweiler (1884-1979) was the art agent for both Picasso and Braques. Kahnweiler's Paris gallery, located at 28 rue Vignon, became a rallying point for avant garde artists like Picasso, whom the German art dealer loyally supported.

In August 1914, Kahnweiler had to flee to Switzerland and his stock of paintings was seized by the French government. At the same time, German authorities impounded a collection of Matisse's paintings owned by the Stein family which was part of an art exhibit in Berlin. The Steins, even though the U.S. was not yet in the war, had to sell their paintings at a loss to a Danish collector. Kahnweiler's art was auctioned by the French to support the "nothing now but war" effort.

The "Great" War was a war on art. Cubism and all other forms of independent thought and expression were thrown into the furnace of militarism. But Picasso, the Spanish non-combatant, could resist this mindless, soul-consuming tyranny - and he did.

Picasso retained Cubism as the dominant style of his painting during the early war years. His greatest work during 1915 was the Harlequin so admired by Henri Matisse and now on display at the Museum of Modern Art. Yet Picasso, like so many great artists, admired the portrait sketches of Jean-Auguste-Dominique Ingres (1780-1867). In 1915, Picasso began doing a series of portrait sketches of fellow artists like his friend Max Jacob, some of which are on view in the Barnes Foundation exhibit. 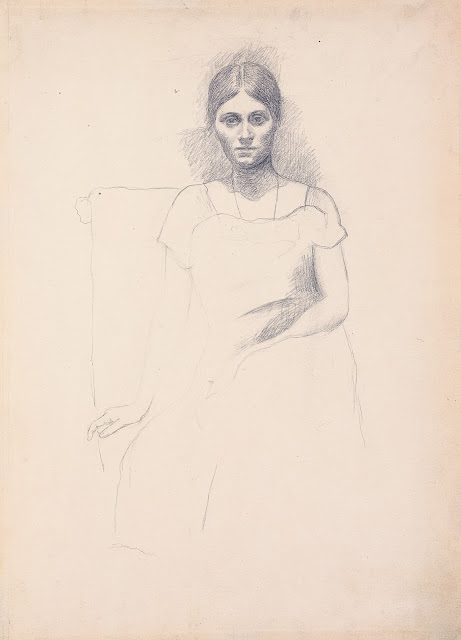 Pablo Picasso, Olga Picasso, Seated, 1918
It is no exaggeration to say that the exquisite portrait sketch of Olga Picasso, created in 1918, bears a comparison with those of Ingres from a century before. This work is such an astonishing demonstration of the ideals of classical composition that a passing glance might well mislead a viewer to think that the drawing was from the hand of the French nineteenth century master rather than the Spanish modernist.

The real significance of Picasso's "rediscovery" of Ingres lies in the 1915 date of his first efforts like the portrait of Max Jacob. Picasso returned to classicism in 1915 before the controversial debut of Les demoiselles d'Avignon at the 1916 exhibition organized by André Salmon,  before he ventured to Italy in 1917, before the famous "call to order" by Jean Cocteau in 1918.

All of these events have figured prominently in accounts of Picasso's return to realism from Cubism.The Picasso: The Great War exhibit shows that Picasso never entirely abandoned Cubism nor did he completely embrace classicism. 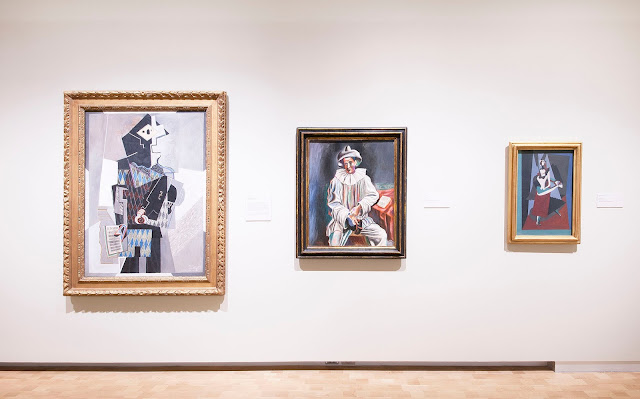 On view in the exhibit is a major Cubist work from the collection of the Cleveland Museum of Art, Harlequin with Violin (Si Tu Veux), painted in 1918. Displayed next to it is a realist depiction of the other mainstay of the Commedia della’arte, Pierrot. This too was painted in 1918.

To underscore Picasso's ability to engage in seemingly contradictory forms of art, the exhibit curators positioned another Cubist work, a portrait of the celebrated Spanish dancer, Blaquita Suarez (1917), to the right of Pierrot.

Interestingly, the piece of sheet music held by the Cubist Harlequin with Violin is entitled Si Tu Veux or If You Like. It is hard to resist the conclusion that Picasso was including the viewer in an open secret: he, Picasso, painted the way he wanted to, when he wanted to, because he was Picasso.

Another significant work on display in Picasso: The Great War, Experimentation and Change is Studies, dating to 1920.  Life-like oil sketches of a head and hands share the canvas with Cubist still-life studies. It is an ensemble effort, with Picasso preparing for a future work before he had decided upon the style he wanted to paint. 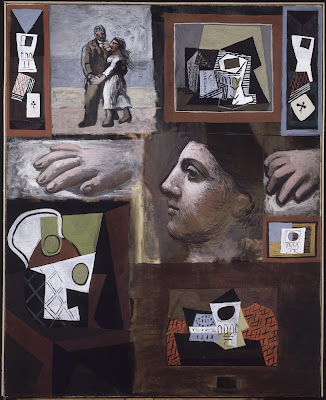 If there was a motivating factor for Picasso's embrace of classicism - beyond his own creative impulses - it was his friendship with the poet, artist and film producer, Jean Cocteau (1889-1963). Cocteau introduced Picasso to the ballet impresario, Serge Diaghilev, and in 1917, Picasso traveled to Italy to collaborate on a modern ballet called Parade.

Parade was a meeting of minds and work of genius. The script was written by Cocteau, the music by Erik Satie, the choreography by Leonide Massine and the stage curtain and costumes designed by Picasso.  Misia Sert, the queen of Paris society and Diaghilev's muse, provided the money. Parade debuted at a benefit performance for wounded Allied soldiers on May 18, 1917.

The premier of Parade became the stuff of legend. The opening was more of a "Friday night fight" than a cultural event. It was greeted by jeers on one side and cheers on the other. Cocteau and Satie commenced an ugly quarrel with a hostile dance critic that landed Satie in jail and left Cocteau nursing bruises from a police baton. Picasso, at least initially, emerged unscathed, marrying one of the ballerinas, Olga Khokhlova. 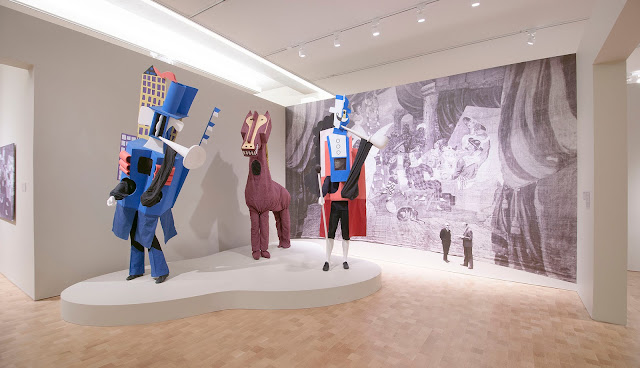 Echoes of the mythic events surrounding Parade are very evident in the galleries of the Barnes Foundation. Large format photos of Picasso with the team of painters who assisted him and of the finished stage curtain are powerful reminders of the labor involved and the scale of this storied production.

Picasso's continuing fascination with Cubism is evident in the reconstructions of several of the costumes from Parade. One costume, that of the Chinese Conjuror, is an actual survivor from the original ballet. 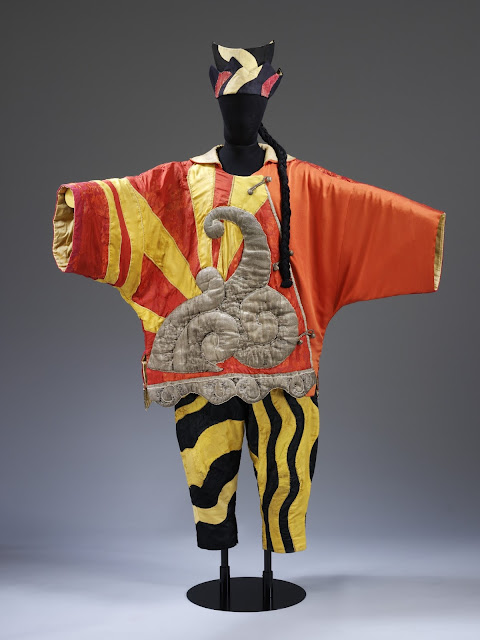 Pablo Picasso, Costume for the Chinese Conjuror from Parade, 1917

The romance with Olga Khokhlova, begun during Parade, certainly propelled Picasso along the path of classicism for the remainder of the war years and into the early 1920's.
It was a measure of Picasso's idea of the woman he set out to marry that he produced such an amazing portfolio of portraits of Olga. Given his infamous remark that women were either goddesses or doormats, I think the 36-year old Picasso had set his heart on a goddess. Olga Khokhlova looked, acted and indeed possessed the virtuous and strong-minded character to fit the role.

The courtship and early married life of Picasso and Olga Khokhlova was an attempt to transform the ideal into reality. If their marriage ended in disaster, it produced some of the most beautiful portraits of a woman created during the twentieth century. It also inspired a remarkable series of works evoking the primal, nurturing female principle. Only Picasso could have  achieved this creative triumph - even as his marriage was headed toward the rapids. 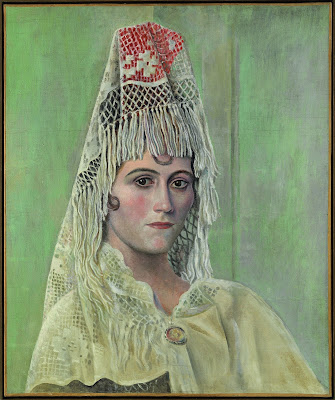 Picasso painted Olga Khokhlova in a Mantilla in 1917 and presented it to his mother, Doña María. It is a beautiful, haunting work, a tribute to the great Spanish portrait masters, Velasquez and Goya. It says something about the ironclad formalities of Spanish society that Picasso created this magnificent work to please his mother, rather than his bride-to-be.

Picasso married Olga Khokhlova in 1918 and their son, Paolo, was born in 1921. During these sunny years of their marriage, Picasso painted some of the most extraordinary evocations of motherhood ever created. The Barnes exhibit has one of these on view, albeit without a child in the mother's arms, as is usually the case with these distinctive works.

The large, nurturing "earth mother" is not conventionally beautiful, certainly not by 1920's standards. Instead Picasso's "mothers" radiate strength and love, and, in this case, are marked by anxiety for their children's welfare. 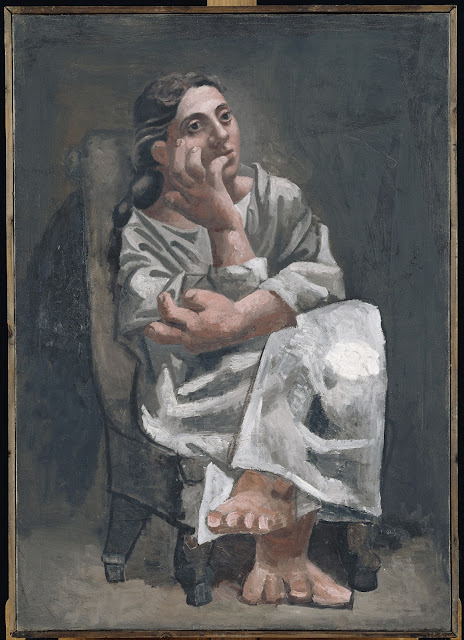 Picasso, in fact, created images of motherhood in the way that very young children experience their mothers. Children see and depend upon their mothers as the providers of unstinting, unquestioning love. Mothers are the arms that hold, the hands that caress, the faces that reassure.

After the horror of the trench warfare of World War I, society in Europe and America craved the "normalcy" of tradition, a "return to order" as Cocteau proclaimed. And the survivors of the Great War yearned for the kind of nurturing that Picasso depicted with his "earthbound" maternal angels. That state of desperate desire is where the superb exhibit at the Barnes Foundation concludes.

For Picasso and his world, however, there would be no lasting "return to order." Picasso's marriage foundered. Yet, he would not agree to a divorce that would cost him half his property. Olga Picasso lingered, married but unloved, until she died in 1955. Picasso, tormented by his inner demons, came to see himself like the fabled Minotaur of antiquity, half-man, half-beast.

And then war came again, in 1936. This time armed conflict shattered Picasso's beloved Spain. Bombs rained down upon a vulnerable, undefended city called Guernica. Pablo Picasso took up his paint brush and once more matched his awesome talent and creative vision against the forces of brutality and darkness, in a world reduced again to "nothing now but war."