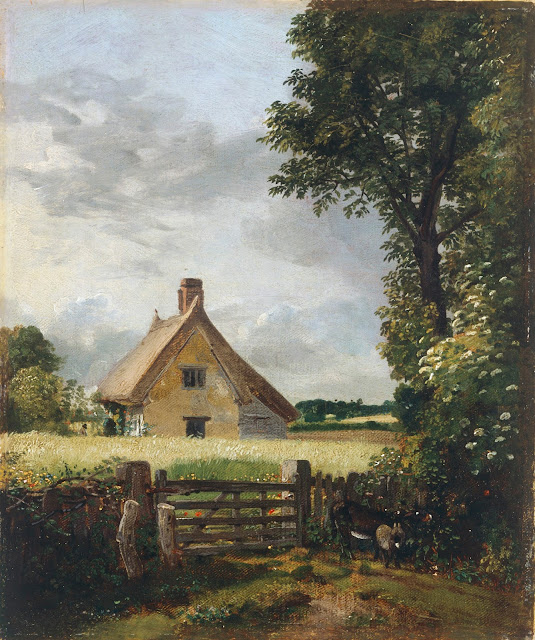 The British Passion for Landscape

The British are an inventive people. Many of modern times's great innovations are products of British ingenuity: steam engines, the postage stamp, the chocolate bar, the miniskirt ... and many, many more.

The British did not invent landscape painting.  After viewing the Pastures Green & Dark Satanic Mills exhibit, however, a visitor to the Princeton University Art Museum might well credit landscape art as another British "first."

The rise of landscape painting in the West is a complex story. The Dutch during the seventeenth century were the real pioneers of the genre.

The British, as the subtitle of this wide-ranging exhibit rightly proclaims, do have a "passion for landscape." This emotion-driven response to the natural environment is not a matter of pure sentiment. It is actually a consequence of the "conquest" of nature.

Tim Barringer, one of the curators of Pastures Green & Dark Satanic Mills, writes that "visions of nature are at their most intense when the viewer inhabits an urban, industrial world..." 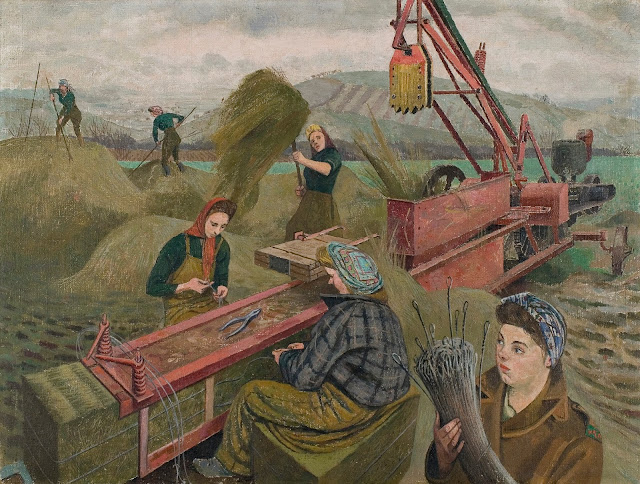 Humans, of course, have been shaping nature to suit our needs for thousands of years. But a staggering manipulation of forest, field and stream began in Great Britain during the 1700's. Nature was altered to an unprecedented degree - first in Britain and then worldwide.

Pastures Green & Dark Satanic Mills is an exhibit of 80 paintings and a selection of photographs which document the artistic response to the Agricultural and Industrial Revolutions in Great Britain. Along with British masters of landscape painting like J.M.W. Turner and John Constable, the exhibit includes paintings by artists from other nations who lived or worked in Britain such as Claude Monet and Oskar Kokoschka.

All of the works in this special exhibition come from one institution: the Amgueddfa Cymru–National Museum Wales. Welsh artists and art collectors have played a decisive role in the evolution of British art as this exhibit continually - and correctly - affirms.

The Welsh are the descendants of the Celtic peoples who were driven into the mountainous extremities of Britain by the onslaught of the Anglo-Saxon invaders during the early Middle Ages. Wales preserved its independence until a new set of aggressors in the thirteenth century, the Normans under Edward I, seized control.

Wales languished as a political fiefdom of England and a cultural backwater until the mid-1700's.  A talented Welsh artist, Richard Wilson (1714-82) then sparked a century-long renaissance of British art that was to culminate in the mighty landscape paintings of J.M.W. Turner. 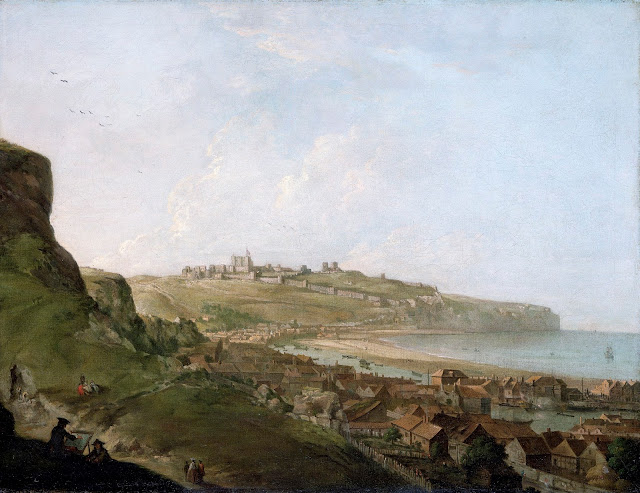 Initially a portrait painter, Wilson took to portraying "topography," especially landmarks like Dover Castle. In this striking early work, Wilson brilliantly included small human figures - including himself, painting en plein air - to give an indication of scale, of insignificant man in relation to mighty nature.

Wilson's success promoted a sense of the awesome expanse and dramatic effect of nature. A few years after Wilson painted Dover Castle, Edmund Burke wrote his influential treatise on perception, A Philosophical Enquiry into the Origin of Our Ideas of the Sublime and Beautiful.

In 1750, Wilson went to Italy, joining the cultural pilgrimage known as the Grand Tour. There he discovered the works of the French classicist, Claude Lorraine (1604-1682).

Wilson was greatly taken by the lengths to which Claude went to evoke light on his canvases. He was also impressed by the way that Claude created landscapes that recalled the hallowed realm of Arcadia, the idyllic abode of gods and heroes. 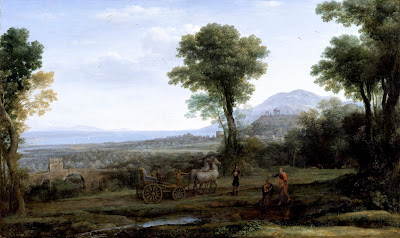 These two states of mind, the Sublime and the Arcadian, entered into the lifeblood of British art thanks to Wilson. Many British painters followed his lead but unexpected political events also contributed to the growing cult of nature and landscape art in the British Isles.

France went to war with Britain in 1778, in support of the American Revolution. The Grand Tour hit a roadblock. Things got even worse in 1789 when the French Revolution engulfed nearly all of Europe. Travel to Italy became difficult and dangerous.

The change of scenery was not as surprising as one might think. The late eighteenth century witnessed a revival of interest in the folklore, legends and poetry of the ancient peoples of Europe, notably the Celts. These tribesmen, once deemed as barbarians, were placed on a pedestal previously reserved for Greeks and Romans.

In 1757, the English poet, Thomas Gray, published The Bard: a Pindaric Ode recalling the heart-rending purge of Welsh poets by the blood-thirsty Edward I. Tourists flocked to visit the locations mentioned in Gray's tragic verse. 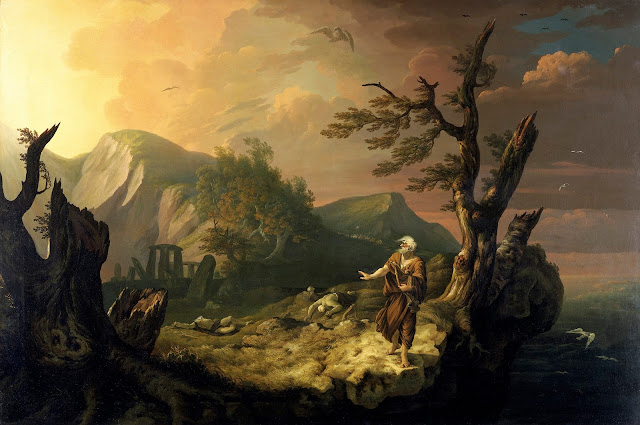 A Welsh painter, Thomas Jones, created a visual epic to match Gray's poem, depicting the last of these bards, about to hurl himself from a cliff rather than surrender to Edward I.

British landscape painting took many forms in what is now regarded as the "golden age" of British art, roughly from 1768 to 1851. Almost all of the British artists of this amazing era followed the lead of Wilson, but their emulation took a variety of forms. There was little of the "sublime" in the works of Thomas Gainsborough (1727-1788) or of John Constable (1776-1837).

Both Gainsborough and Constable were born in East Anglia, a region much influenced by Dutch art. Gainsborough, sick of pleasing lords and ladies as a society portraitist, painted landscapes to please himself. Constable so loved his boyhood home that he was unmoved by other regions of Britain with more spectacular scenery, even the fabled Lake District. 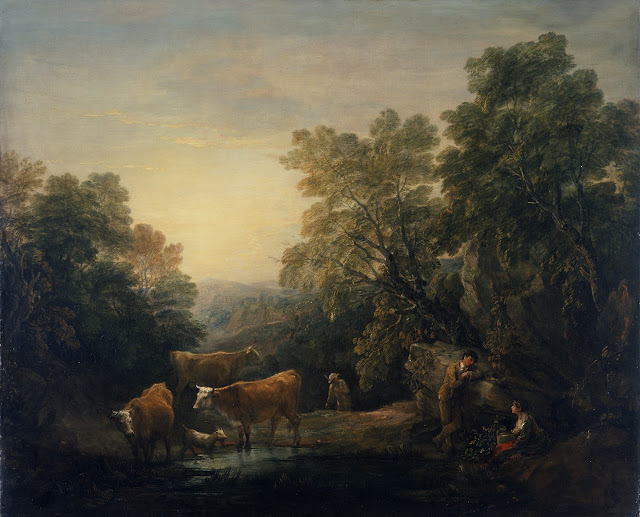 Constable's technique in painting out-of-doors and his "everyday" subject matter were anything but conventional. Constable, a "quiet revolutionary" in his art, set the stage for Impressionism in France. Yet, there was an ironical undercurrent in Constable's art which would flow through British art to its disadvantage.

A devoted family man and generous friend, Constable was also a right wing reactionary. As Britain came dangerously close to revolution in 1830, Constable rejected even the slightest political reforms to prevent social dissent.

Even though his paintings won widespread acclaim in France during his lifetime, Constable never crossed the Channel to collect the gold medal awarded him in 1824. Remaining a "Little England" man, Constable helped create an invisible barrier to a wider role for British art in the modern world.

Constable did praise his colleague, J. M.W. Turner for having a "wonderful range of mind." The Princeton exhibit certainly bears this out with a superb selection of Turner's works on view, including water colors made during visits to Wales early in his life and a brace of major works from his later "soap suds and whitewash" period.

Constable's homebody attitude, more than Turner's embrace of new ideas, came to characterize British art in the Victorian era. A change of attitude toward landscape art had earlier begun to emerge in reaction to the Industrial Revolution - as William Blake poignantly expressed:

The Princeton exhibit includes some early depictions of industrial sites that were neither dark nor satanic. But by the time Turner died in 1851, steam engines and engineers no longer appealed to the British imagination as heroic or sublime. In a reaction to urban squalor and  harsh working conditions, most Victorian painters banished the Industrial Revolution from their canvases.

In an amazing twist of fate, foreign artists refocused the artistic dialog in Britain back on the "real" world of the nineteenth century. Claude Monet painted the reality of London with its "pea souper" fogs  and the open sewer of the Thames. Monet, in keeping with the Impressionist credo of "the heroism of modern life," exulted in scenes that native British artists preferred to ignore. 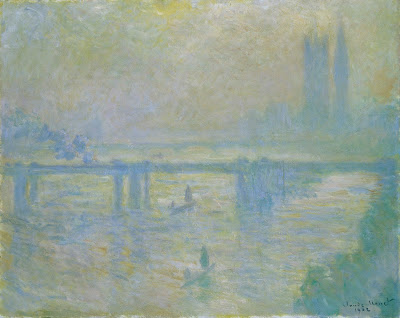 "Without the fog London wouldn't be a beautiful city," Monet proclaimed. "It is the fog that gives it its magnificent breadth."

There is beauty - of a type - in the flame-tinged sky above the Dowlais steelworks in Cardiff, Wales, as captured in the stunning oil painting by the American-born Lionel Walden (1861-1933). Steelworks, Cardiff, at Night, 1895–97, is a huge, brilliant work, the center piece of the Pastures Green & Dark Satanic Mills exhibit.

Walden cast an infernal pall over what was the world's biggest, most modern steel mill when the painting was created. But one should not focus on the brilliant color effects at the expense of Walden's skillful design. The exhibit also displays a small oil sketch which Walden used to prepare this finished painting. In the preparatory work, the curve of the train tracks is less pronounced and less effective than in the final version. 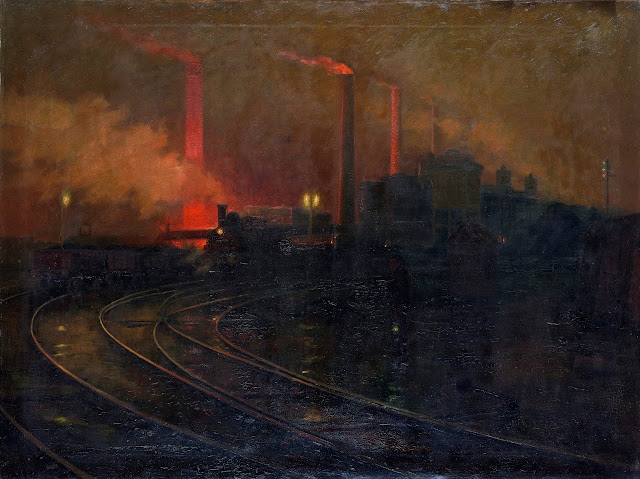 Steelworks, Cardiff, at Night is truly a stunning work of art. It took my eyes a short time to adjust while studying it, as if I was actually focusing on a harsh light while standing in shadow. It was some minutes before I realized that there is a solitary, shadowy figure standing mid-canvas, holding a dimly glowing lantern in his hand.

Works by foreign-born painters like Monet and Walden gave some impetus to the British art establishment to move in the direction of Modernism by 1900. But what really created the decisive breakthrough was the London exhibition staged by Roger Fry in 1910, Manet and the Post-Impressionists. Fry was no great admirer of Monet and Renoir but had come to regard Cezanne as a "kind of hidden oracle of ultra-impressionism."

Cezanne exercised a major influence on British art in the twentieth century as can be seen in very different works in the exhibit such as Stanley Spencer's Snowdon from Llanfrothen, 1938, and Graham Sutherland's Road at Porthclais with Setting Sun, 1975. 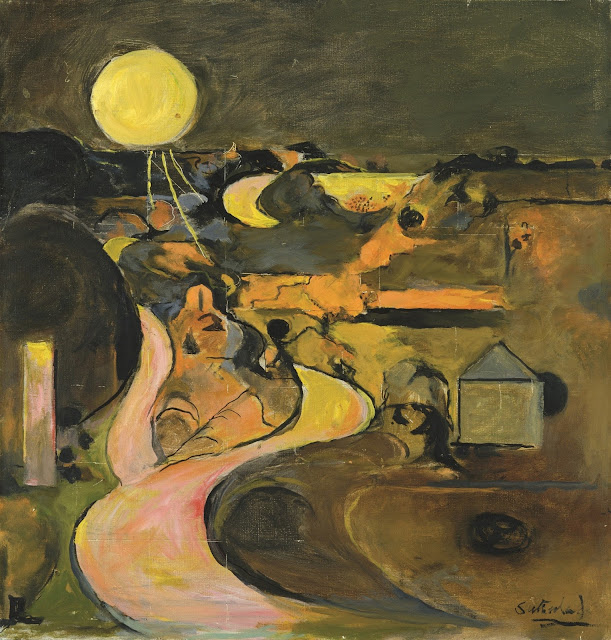 The really notable point in Fry's estimate of Cezanne, however, is his figure of speech: a "kind of hidden oracle."

The British passion for landscape derives from the conviction that are indeed "oracles," underlying strata of meaning, deep integral truths, to be found in these depictions of the natural world.

Perhaps this search for meaning can be traced to the ancient Celtic bards. Even if it is a more modern sensibility, dating to the 1700's and Burke's theories of the sublime, landscape painting in Britain represents a sustained commitment to the vital, living spirit of the natural world.

Blake's vision of building "Jerusalem in England's green and pleasant land" may be a long time coming. But the theme of Pastures Green & Dark Satanic Mills is not easily dismissed. This provocative exhibit, on view for one more month at the Princeton University Art Museum, reminds us that the landscape painter's credo of "truth to nature" is a lot more than a figure of speech.