Delacroix and the Rise of Modern Art at the National Gallery, London 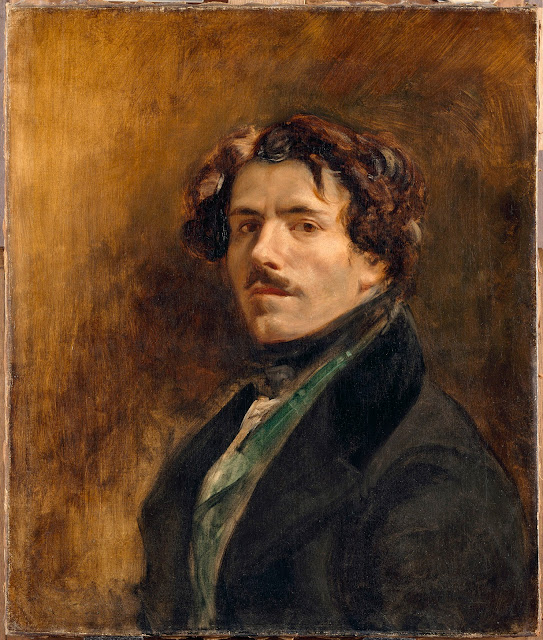 Delacroix and the Rise of Modern Art

There is an intangible element to the character and achievement of  Eugène Delacroix (1798-1863) that makes it easy to describe him as "the last of the Old Masters" or the "last Romantic."

The provocative exhibit at the National Gallery in London, Delacroix and the Rise of Modern Art, considered him from a different vantage point. Delacroix was the first of the New Masters.

When I recently visited Delacroix and the Rise of Modern Art, I was struck by some basic similarities with an earlier exhibit, Cezanne and Beyond at the Philadelphia Museum of Art in  2009. The exhibits featured major works by Delacroix or Cezanne, and by artists whom they inspired.

This comparative approach enables us to grasp how Delacroix and Cezanne created new paths for painting which subsequent generations of artists were to follow. There was an all-important difference, however, in their respective legacies.

Cezanne and Beyond charted the efforts of Henri Matisse, Alberto Giacometti, Ellsworth Kelly and others to articulate the motifs and techniques of the "Father of Modern Art." Delacroix's paintings,  on the other hand, were used by his successors more as a source of broad artistic themes. 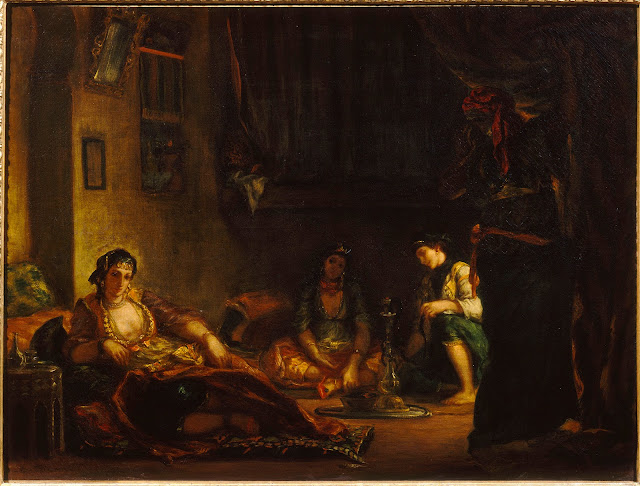 Eugène Delacroix, Women of Algiers in their Apartment, 1847-9

Delacroix and the Rise of Modern Art displayed sixty paintings, one-third of which were by Delacroix. This relatively small number was unavoidable since much of Delacroix's work cannot leave France. Delacroix was a major mural painter, covering the walls of government institutions and churches in Paris with paintings that rank high in his life work. Likewise, his most famous painting, Liberty Leading the People, is so central to the identity of the French nation that even a short visit to London is out of the question.

Thanks to judicious selection and an excellent short film about Delacroix's murals, the range of Delacroix's oeuvre was surveyed with admirable balance.

The display of one of Delacroix's early works underscores the effort that went into the design of this exhibition. The Death of Sardanapalus, painted in 1827, is essential to understanding Delacroix's bravura use of color and his anti-authoritarian political views. As Kenneth Clark wrote, "It is the most liberated of all his works, the one in which he most unreservedly gratified all of his appetites." 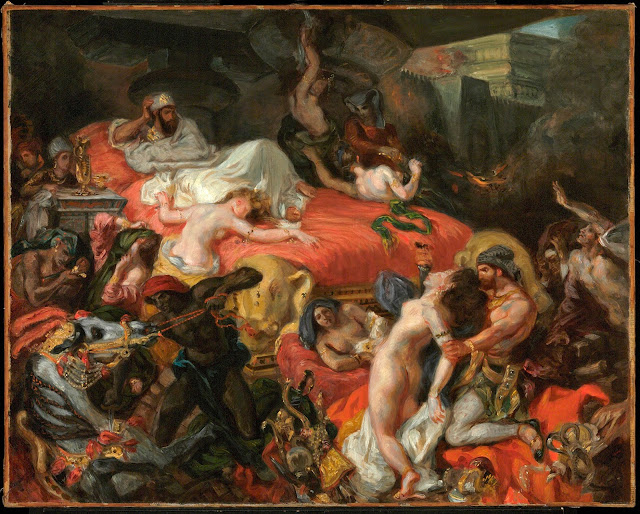 Eugène Delacroix, The Death of Sardanapalus, 1844

Yet The Death of Sardanapalus was simply too big to transport from the Louvre, measuring 12 ft 10 in x 16 ft 3 in.  Fortunately, Delacroix painted a smaller, personal copy in 1844. This version was displayed in the exhibition, illustrating major themes in Delacroix's art without overwhelming the exhibit as the huge original would have done.

Delacroix's influence on the rise of Modernism was  thus well established by this fine exhibition.  With works like The Death of Sardanapalus, Delacroix bequeathed a manifesto of artistic freedom to  those who followed him.

"O young artist," Delacroix exclaimed, "you want a subject? Everything is a subject; the subject is yourself; they are your impressions, your emotions before nature. You must look within yourself and not around yourself.” 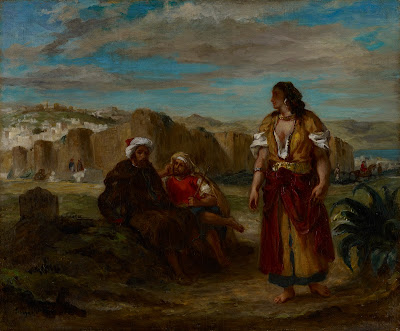 Eugène Delacroix, View of Tangier, 1852-53
In a bold move, Delacroix went to Morocco in 1833 as the official artist on a diplomatic mission. While in North Africa,  Delacroix sketched "living antiquity" in a setting little touched by European civilization.  When he returned to France, he had source material for a lifetime of painting.

Delacroix never traveled  beyond the borders of France again. But the trip to Morocco was not an isolated act. Repeatedly, Delacroix ventured to realms left unexplored by other artists.

Following an earlier visit to Great Britain in 1824, Delacroix incorporated techniques of English landscape painting in his work. This was an unthinkable act for French painters. At a time when still-life painting was considered fit only for women artists, he revived the genre as a bold exploration of color. And though a skeptic in matters of faith, Delacroix's murals at the Church of Saint-Sulpice in Paris rank among the greatest masterpieces of religious art since the Renaissance. 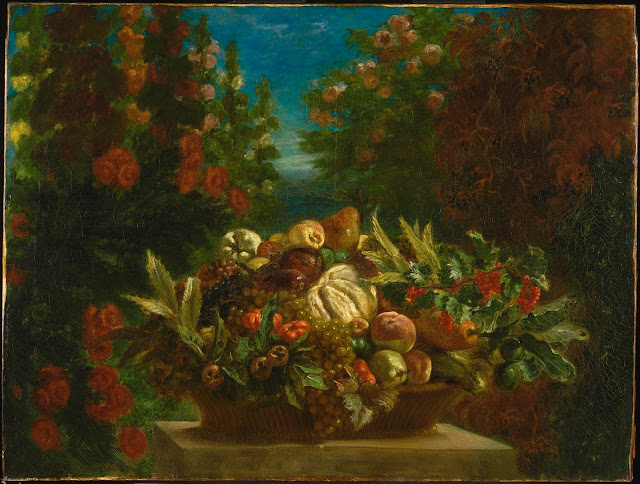 Eugène Delacroix, A Basket of Fruit in a Flower Garden,1848-49

An excellent vantage point for considering the legacy factor of Delacroix's career is a comparison of his A Basket of Fruit in a Flower Garden (1848-49) with The Trellis, painted by Gustave Courbet in 1862.

The French term for still-life is nature morte. There is nothing "dead" about Delacroix's painting. The flowers and fruit are bursting with life, thanks to the vibrancy of color and the exceptional skill of the modeling.

Delacroix's work evokes the fertility of nature, the recurring cycle of life - seeds, flowers, fruit - that propels earthly existence. Courbet's The Trellis takes this a step further by including a young woman in contemporary dress, "blooming" with health and vitality. 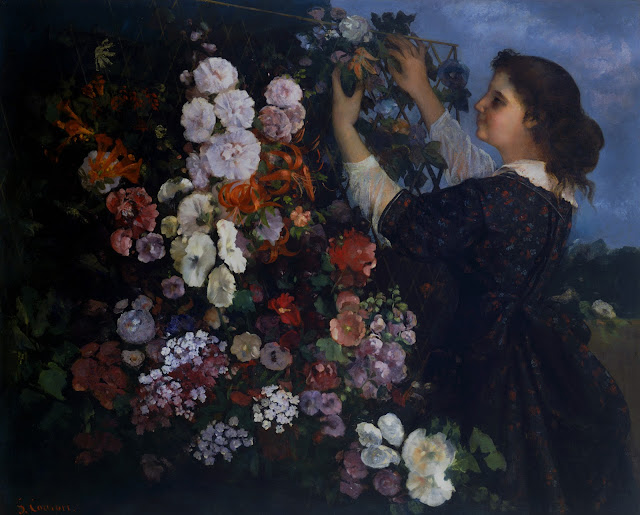 The influence of Delacroix on succeeding generations of painters is particularly notable in landscape painting. Delacroix had been friends with the tragically short-lived Richard Parkes Bonnington (1802-1828), who might well have succeeded J.M.W. Turner as the pillar of British landscape painting. After Bonnington's death, Delacroix carried on with vivid depictions of English Channel seascapes.

Long before Courbet and Monet immortalized  the rocky coast around Etretat, Delacroix was there painting in water color and oil sketch. Some of Delacroix's seascapes (and landscapes) were imaginative evocations of nature, such as Shipwreck on the Coast. Whether Delacroix witnessed the aftermath of an actual maritime disaster is beside the point. Here he depicted the living sea, the source of life and the taker of life. 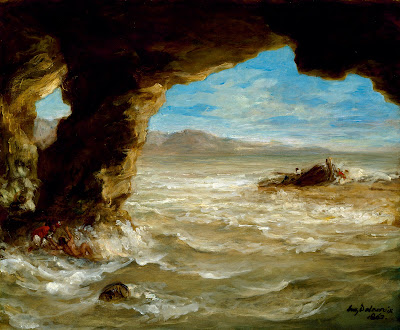 Eugène Delacroix, Shipwreck off a Coast,1862

Delacroix's experimental use of color led to claims that he was a pioneer of scientific painting. No artist was more determined to lionize Delacroix in that respect than Paul Signac, the great pointillist painter who was born in 1863, the same year that Delacroix died.

Taking on the leadership of pointillism after the early death of Georges Seurat, Signac invoked Delacroix's name and achievements to promote this exacting school of painting. In 1899, Signac published a polemical book, From Eugéne Delacroix to Neo-Impressionism. Intending to establish the credentials of Post-Impressionism, Signac traced the movement's signature "dots" back to Delaroix's flochetage. 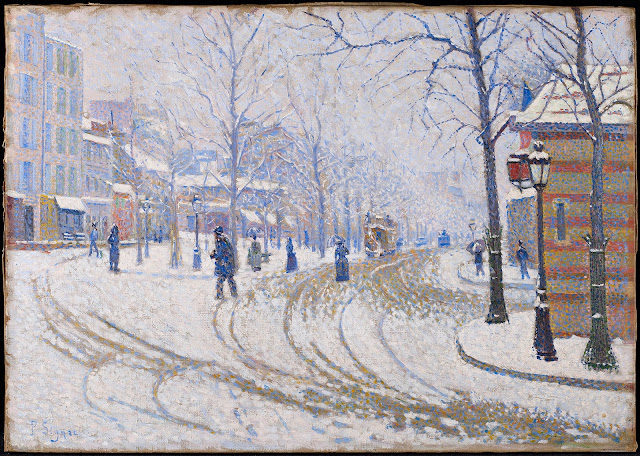 Signac was personally generous, for all his doctrinaire theorizing. He supported Matisse emotionally and financially during a very difficult period of his life and after the First World War, he led the effort to preserve Delacroix's Paris studio as a museum. I surmise that Delacroix would have enjoyed Signac's company - Signac was a superb sailor - while brusquely rejecting an honorary role as the apostle of Post-Impressionism.

Delacroix is likely to have been displeased with the later appreciation of his paintings from Morocco, as well. His vivid depictions of life in North Africa were linked to one of the less praiseworthy genres of nineteenth century art, Orientalism.

Delacroix's expedition to Morocco enabled him to grasp the humanity and nobility of the people there. Unfortunately, as the "scramble for Africa" commenced, a cultural veneer was applied to the crass, ruthless exploitation of African peoples by the colonial powers of Europe. By stressing exotic, sensual and violent themes, Orientalism was used to justify the conquest of the "Dark Continent." 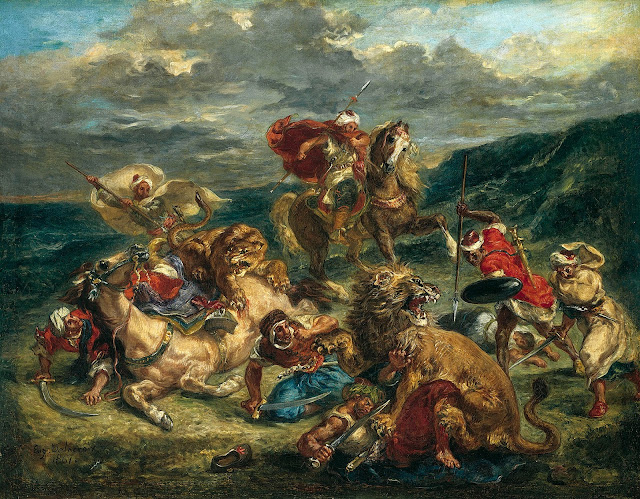 As his writings reveal, Delacroix's complex character was not without elements of chauvinism. He did not, however, engage in the hypocrisy of colonialism. His portraits of the common people of North Africa, women in particular, were respectful and conveyed a real sense of their humanity. 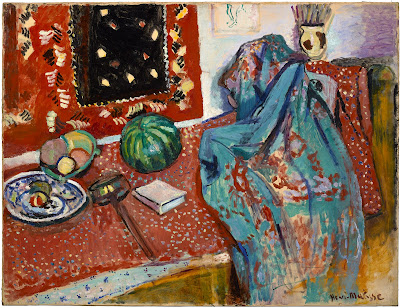 The National Gallery exhibit illustrated Matisse's debt to Delacroix with a work dating to 1906. The Red Carpet, shows how a spiritual affinity between two artists can flourish, even when one of them had not (yet) visited the country whose culture both evoked. 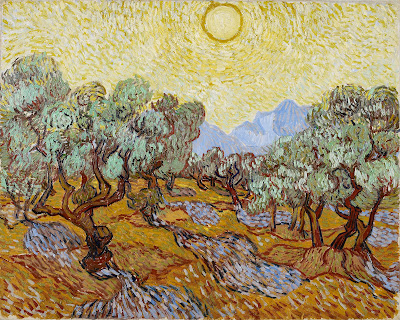 Vincent van Gogh was another of Delacroix's heirs. In September 1889, while convalescing at Saint-Rémy, van Gogh wrote his brother Theo about the influence of Delacroix and the way it inspired him to continue with his own art. The letter beautifully sums up the essential message of the National Gallery exhibit. Van Gogh wrote:

Although I am well aware of the worth and originality and superiority of Delacroix or Millet, for example, I can still say, yes, I too am something, I too can achieve something.

Posted by Art Eyewitness at 7:04 AM