Russia and the Arts at the National Portrait Gallery, London 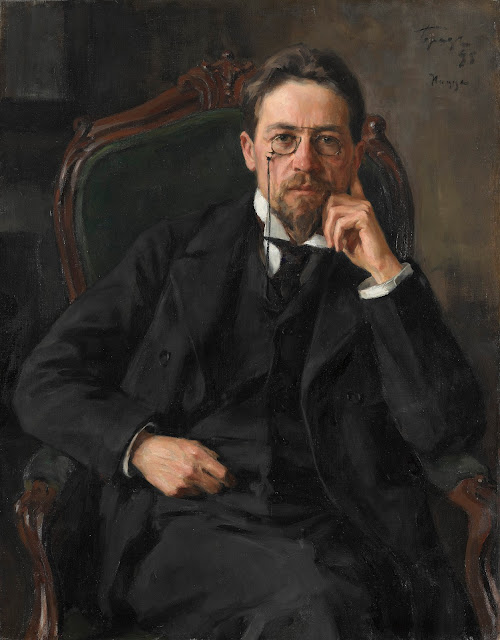 Russia and the Arts: The Age of Tolstoy and Tchaikovsky

"Once in a Lifetime" is an often used expression to describe art exhibitions. In the case of the twenty-six masterpieces of Russian painting on view at London's National Portrait Gallery, this sense of unique opportunity is particularly appropriate.

Russia and the Arts: The Age of Tolstoy and Tchaikovsky is part of an exchange program between the State Tretyakov Gallery in Moscow and the National Portrait Gallery. Unless diplomatic tensions between the West and Russia relax, the incomparable Russian portraits currently at the National Portrait Gallery are unlikely to make further visits to Western Europe or the United States in the near future.

Both the State Tretyakov Gallery and the National Portrait Gallery trace their roots back to 1856. But what happened one hundred sixty years ago differed dramatically, reflecting the cultural identities of the respective nations.

London's National Portrait Gallery was founded in a display of public-spirited action by such eminent Victorians as Thomas Carlyle, Thomas Macaulay and Benjamin Disraeli. In Russia, it was one man, acting alone and using his own financial resources, who created the State Tretyakov Gallery in Moscow. 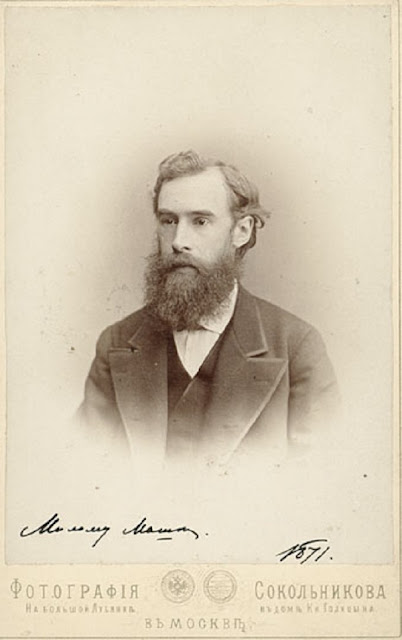 Pavel Tretyakov (1832-1898) was a visionary figure - but a quiet hero. Tretyakov came from a merchant family, whose moderate wealth derived from the textile trade. Significantly, Tretyakov's family were "Old Believers."

Dating back to a religious schism in the mid-seventeenth century, the "Old Believers" had been persecuted and banned from privileged ranks in Russia's government and military. The social position of the "Old Believers" may be compared to that of the Quakers, Methodists and other Dissenters in Britain. Both excluded groups looked to trade and industry and, having made fortunes, reinvested much of their profits into community-minded enterprises.

For Pavel Tretyakov that entailed collecting works of art created by Russian, not foreign, artists. Tretyakov was determined to show Russia in all its astonishing variety and complexity. He also wanted to encourage cultural achievement in a nation where a vast number of people had just shaken-off the shackles of serfdom in 1861. 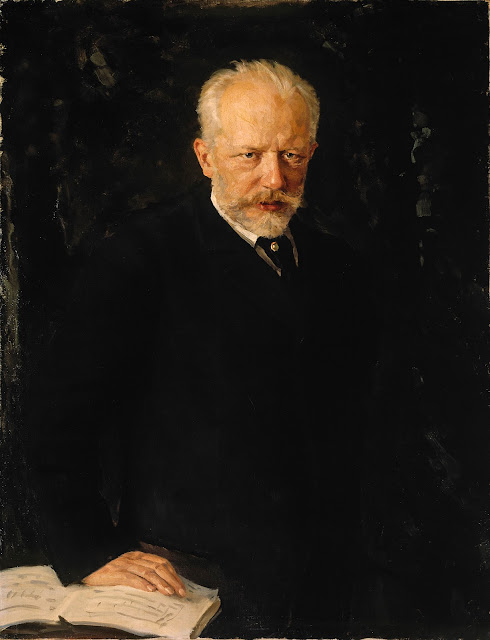 Portraits of Russia's "great and good" featured prominently in his collection, like this striking depiction of PetrTchaikovsky which shows his fearful, careworn face looming like an apparition rising from a sea of blackness.

Eventually, Tretyakov established a gallery at his home on Moscow's Lavrushinsky Lane to preserve these masterpieces of Russian art. Now called the State Tretyakov Gallery, the museum and the nearly two thousand paintings collected by Tretyakov were bequeathed to the city of Moscow in 1892. 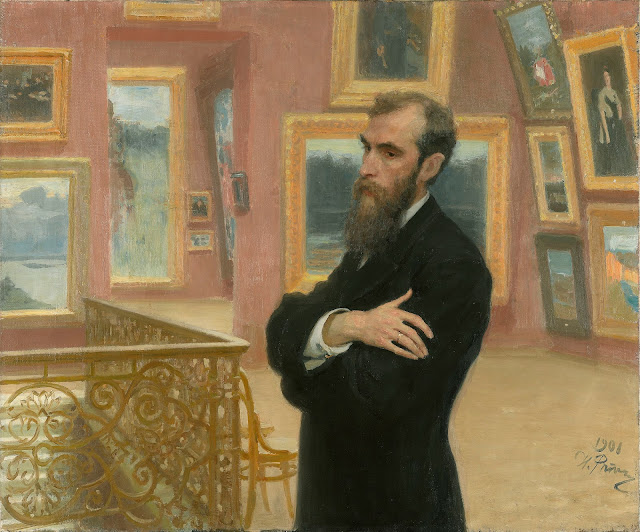 Tretyakov's embrace of art works created by his countrymen was a major shift from earlier patronage in Russia.

Prior to 1856, Russia's ruling elite heeded the example of Tsarina Catherine the Great. Huge sums were lavished on paintings by Western European Old Masters. Portraits, for the most part, were commissioned from visiting foreign artists, notably Elizabeth Vigée Le Brun. And most shocking of all, when a special gallery was created to honor the heroes of the war against Napoleon, the architect was an Italian, Carlo Rossi, and the bulk of the portraits were painted by the English artist George Dawe.

Russia did not lack for native talent in the arts during the 1700's, but most of these artists were serfs, like Ivan Argunov (1729-1802). It took a patriotic Russian from outside the privileged  elite to counteract the callous indifference to Russia's heritage.

The young Tretyakov's first two purchases in 1856, a moralistic genre scene and a battle piece, were hardly impressive. But Tretyakov, self-taught though he was, quickly developed into shrewd judge of talent.

Tretyakov soon amassed an astonishing collection of every genre of Russian art and, in a bold move, began commissioning portraits of his nation's leading writers. Quite often, Russia's literary lions proved difficult to "tame." Count Leo Tolstoy, the greatest of all Russian authors, resisted for years in sitting for his portrait. Finally the threat of inferior, unofficial portraits gained his compliance. 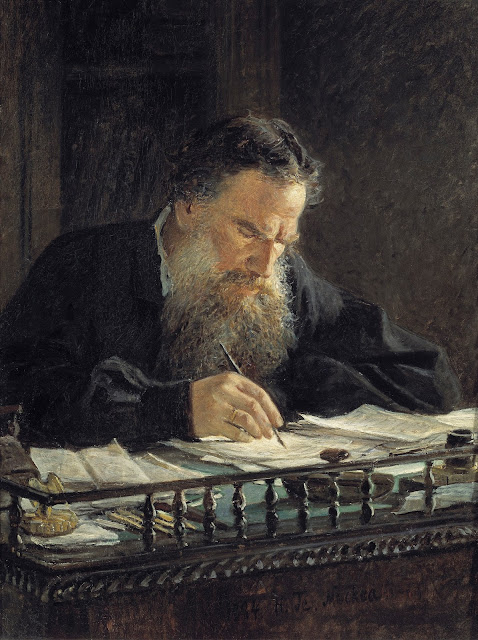 This superb portrait, by Nikolai Ge, dates to 1884. Around that time, Tolstoy renounced literary writing for philosophical works. Ge, a personal friend of Tolstoy, shows him absorbed in editing the manuscript of What I Believe. When published, this book was banned and Tolstoy spent the rest of his life opposing the authoritarian dictates of the Tsarist government and the deeply conservative Russian Orthodox Church.

Ge's portrait of Tolstoy illustrated the fracture in Russian society between its rigid governing elite and the intelligentsia. Percy Bysshe Shelley had declared in 1821 that "poets are the unacknowledged legislators of the world." Nowhere during the 1800's was that more true than in Russia.

In one of the most significant blunders in world history, Tsar Alexander I failed to liberate the serfs of Russia in 1818, despite their loyalty and heroism in resisting Napoleon's legions. Many of the Tsarist officers supported such a liberal political agenda. Alexander's brother and successor, Nicholas I, crushed a mutiny by a band of these reformers, the Decembrists. Nicholas ruled Russia from 1825-1856 with the mindless brutality of a drill sergeant.

During this woeful time, only Russia's writers opposed Nicholas I. Some, like Alexander Herzen, (1812-1870) lived as emigres in Western Europe, exiled from the land they loved. Others, notably Fedor Dostoevsky (1821-1881), endured brutal imprisonment in Siberia.

The effect of long years of hard labor in Siberia, followed by forced service in Russia's army, can be seen in the face of Dostoevsky. The portrait was painted by Vasily Perov. An early favorite of Tretyakov, Perov painted a series of controversial genre scenes, critical of church and state. But with this profoundly moving image of a human mind and soul, locked in upon itself, Perov delivered a powerful rebuke to the corruption and cruelty of the Tsarist prison state. 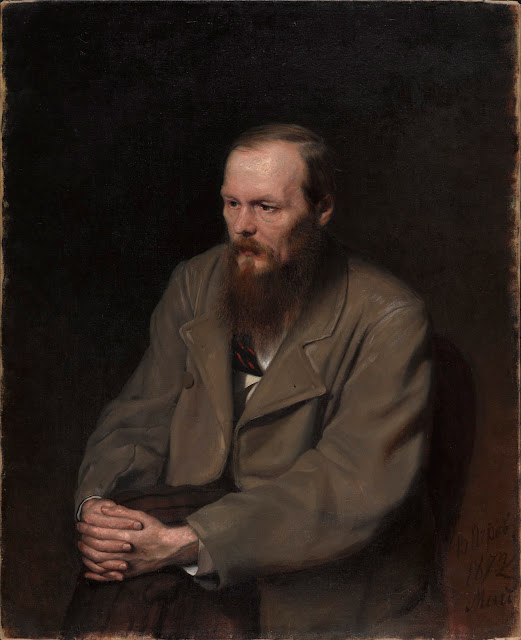 Except for Albrect Durer's Praying Hands, I don't think any artist ever depicted two hands, clasped together, better than Perov. The fingers, intertwined, evoke the lock on a prison cell. This is a brilliant counterpoint to the introspective gaze of Dostoevsky, separating us from this tortured man, who can only be reached via the pages of his classic novels.

Psychological insight is the keynote of the portrait of Modest Mussorgsky by Ilia Repin. Frequently reproduced in art books, Repin's Mussorgsky is an unsettling image. Here we see a man of genius at the brink of death.  It is a challenge to our powers of comprehension for Mussorgsky was not wasting away from tuberculosis. Instead, he was brought low by inner contradictions and unseen weakness - like Russia itself.

Mussorgsky came from a wealthy and influential aristocratic family. He was a pianist of dazzling talent and a brilliant composer.  But Mussorgsky, tormented by inner demons, succumbed to drinking binges, alarming even by Russian standards of excess.

In the late winter of 1881, Ilia Repin hastened to paint Mussorgsky, who was being treated for acute alcoholism in a military hospital. Just as the painting session commenced, the staggering news of the assassination of Tsar Alexander II was announced. Alexander II had bravely tried to correct Russia's despotic misrule, liberating the serfs in 1861. The Tsar was just on the point of creating a national legislature, when assassins attacked his carriage with hand grenades.

During the confusion and grief following Alexander's death, a medical orderly slipped Mussorgsky a bottle of cognac. He died from its effects and Repin never had the chance to formally complete the portrait. 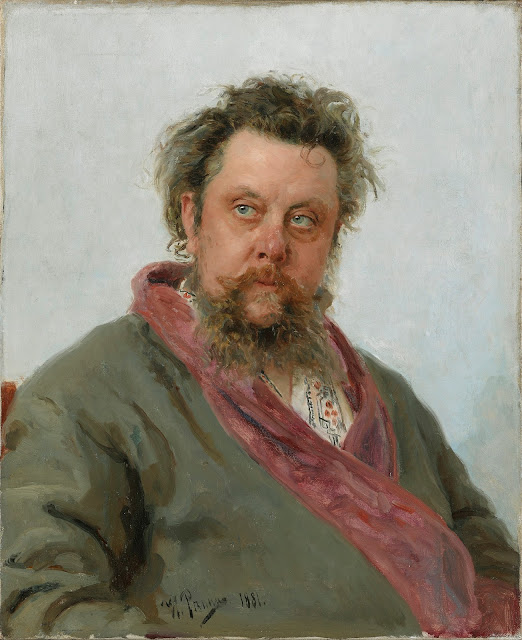 Repin's insight into the complex character of Mussorgsky is so compelling that we scarcely recognize any lack of finish in the picture. Here is life and talent - mortality itself - disintegrating before our very eyes.

Repin's portrait of Mussorgsky is sensational. It is easy to see why Tretyakov favored his work. Of the twenty-six art works in Russia and the Arts, eight are by Repin. These include his portrait of the great pianist, Anton Rubenstein, scowling with a mass of hair billowing like a lion's mane.

Repin outlived Tretyakov by three decades. He lived to see the conflagration of the Bolshevik Revolution and the flight into exile of many of those whose portraits he had painted. Repin himself fled to Finland where he died in 1930.

One who stayed - and incredibly survived - the purges following 1917 was the poetess, Anna Akhmatova (1889-1966).  The "mouth though which a hundred million scream," Akhmatova is celebrated with one of the final portraits in the exhibition. 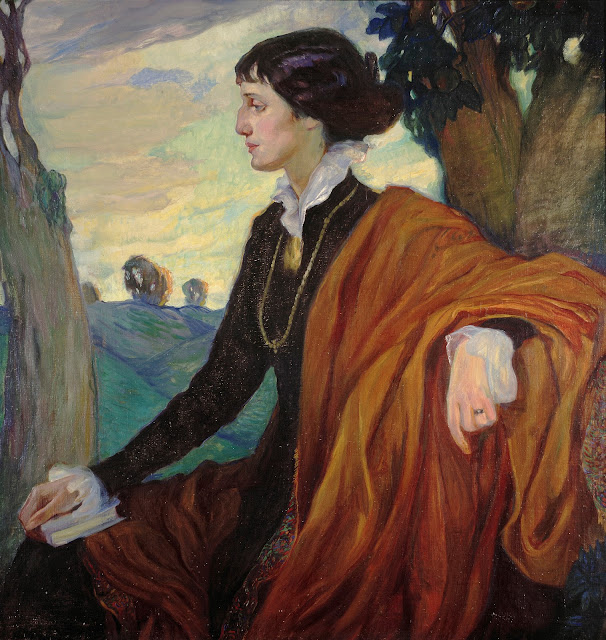 An incandescent work, the portrait of Anna Akhmatova was painted in 1914, as the storm clouds gathered for the terrible upheaval that was to sweep away the brilliant, yet fragile world of Tolstoy,Tchaikovsky and Pavel Tretyakov.

Just before he died in 1898, Tretyakov commissioned a portrait of Anton Chekov (1860-1904), which serves as the introductory image of this review. In 1898, Chekov was known primarily as a writer of short stories. In the few years remaining to him, Chekov the dramatist would achieve a level of theatrical genius not seen since Shakespeare.

But for that brief, eternal moment in 1898, Chekov sits there, peering into the spirit of the cosmos, into the soul of all humanity.

I wonder if Chekov had ever heard the now-famous stipulation of Pavel Tretyakov to one of the painters he commissioned to paint landscapes. If so, I'm sure that Chekov would have agreed. These words of Tretyakov ring like the bells announcing a new day, a new life, a new art.

"I don’t need beautiful scenery, a magnificent composition, brilliant lighting or miracles," Tretyakov declared. "Let it be a dirty pool, but let it be real and poetic. There is poetry everywhere – and the task of an artist is to see and show this."

Posted by Art Eyewitness at 4:47 PM