Edgar Degas: A Strange New Beauty at the Museum of Modern Art 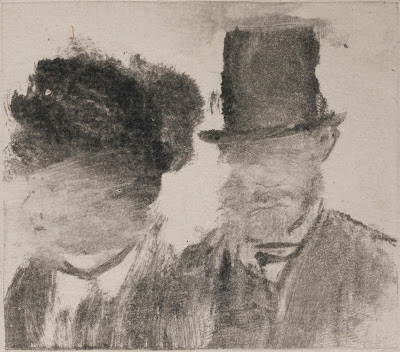 Edgar Degas: A Strange New Beauty at the Museum of Modern Art follows in the footsteps of MOMA's 2014 exhibit, Gauguin: Metamorphoses. Both exhibitions treat an aspect of creative expression - printmaking - normally regarded as secondary to the main focus of two artists renowned as painters.

Gauguin: Metamorphoses charted the familiar, if exotic, venture to the "savage, primitive" world of Tahiti and the Marquesas Islands. MOMA's exhibit of Degas goes even further. It reveals creative endeavors by this enigmatic artist which until now most of us never knew existed.

Fittingly, the focus of this solo exhibit is the printing format which preoccupied Degas, known as monotype. This was a "one of a kind' form of printing, as we shall see, created by a very singular artist.

Degas became interested in printmaking very early in his career when he closely studied the etchings of Rembrandt. The influence of a less famous artist, however, stimulated Degas' embrace of monotype printing. This was Ludovic Napoleon Lepic (1839-1899), a cigar smoking, dog-loving aristocrat who was a close friend of Degas.

There are several etchings by Lepic from the early 1870's in the MOMA show, with "variable inking" done to the print. Such a work strictly speaking is a monoprint, one in a series, with changes made to produce distinctive prints rather than make exact copies. 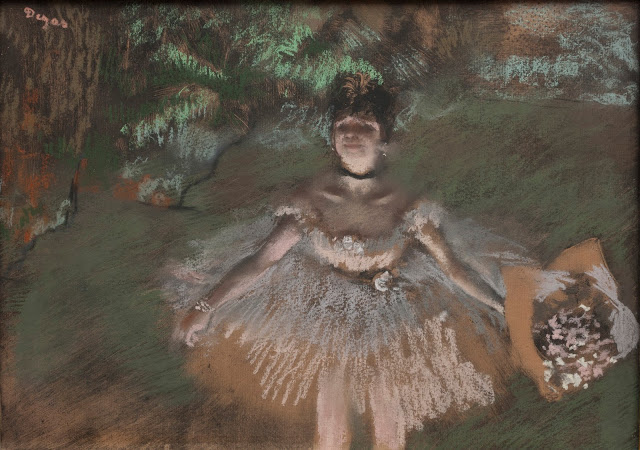 What really intrigued Degas were monotypes. In this process, the artist draws directly with ink on a metal plate, usually copper, which is pressed with a sheet of dampened paper and run through a hand-operated press. The result is a truly unique work of art.

As if the distinction between monoprints and monotypes was not complicated enough, there are two methods of creating monotypes.

The drawing method is known as "light-field." The resultant print resembles a conventional sketch. The plate, however, can be inked with other colors and run though the press with the print again to add a further layer of color. This process can be repeated multiple times to produce almost full-color images.

A second method, “dark-field manner,” is even more dramatic. The plate is entirely covered with ink and the image is created by removing ink with a pen, brush or rag - or fingers. In a way, creating dark-field monotypes is akin to sculpture. Just as marble is chipped away to reveal the body "concealed" inside the stone, so the ink is wiped clear, allowing the form of a person to take shape or a mountain to emerge.

Degas became quite a master of monotypes. One can surmise that the monotype process, exacting and unpredictable, engaged him on an emotional level usually held in check by his austere demeanor.

Degas also grasped that monotypes could capture the essence of modern life. One of Degas' most notable monotypes, Heads of a Man and a Woman, leaves the faces of this pair unformed and out-of-focus. This brilliantly evokes the sensation of having only a fleeting glimpse of a person's features as they pass us by in the "stream of consciousness" of daily living. 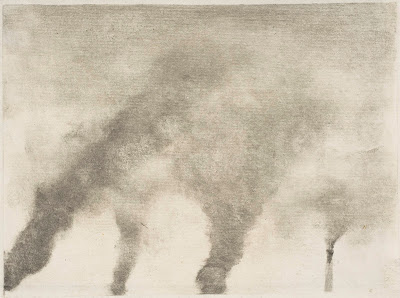 Another example of the way that Degas depicted modernity is the unprecedented work, Factory Smoke. Except for Turner's Rain, Steam and Speed – The Great Western Railway, there is not a more evocative work of art dealing with the Industrial Revolution than this stunning monotype from the collection of the Metropolitan Museum of Art.

The energy and risk-defying zeal that Degas devoted to these monotypes was prodigious.  A friend and fellow printmaker, Marcellin Desboutin, left an unforgettable description of Degas, totally absorbed in the challenging art of monotypes.

Degas, Desboutin declared “is no longer a friend, a man, an artist! He’s a zinc or copper plate blackened with printer’s ink, and plate and man are flattened together by his printing press whose mechanism has swallowed him completely!”

Degas created his first monotype with Lepic's assistance and both artists signed the finished work. This was The Ballet Master, most likely done in 1876. The theme may be a predictable choice by Degas. What he did with this print had huge implications for his continued exploration of the potential of monotypes.

When a monotype is successfully rolled through the press, most artists are content to have produced a unique work of art. Not Degas. He saw the possibility of adding detail and depth to his monotypes with the application of chalk or pastel crayon. Occasionally, Degas dampened his pastels to create a watercolor effect. 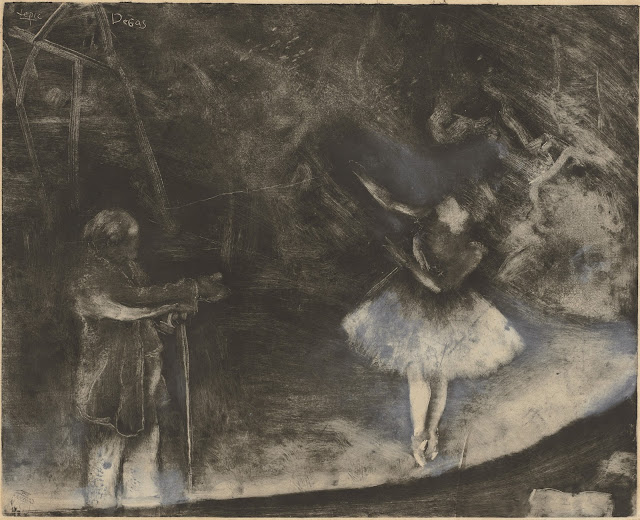 The Ballet Master provides telling insight into this process. Degas applied pearly white color (most likely opaque watercolor) to the dancer's legs and skirt in such a way that they seem to be illuminated by the stage lights. Only an artist of Degas' stature could have contrived to evoke "limelight" in a monotype.

Degas kept pushing the monotype to new levels of artistic brilliance. He began making second prints with the residue of the inked copper plate - a seeming contradiction for a monotype. This second print, termed a cognate, is better understand by its nickname, "ghost." Using pastels or other media, Degas transformed this barely discernible print into an entirely new work of art. A comparison of the two versions of Three Ballet Dancers testifies to Degas' technical mastery in this respect. 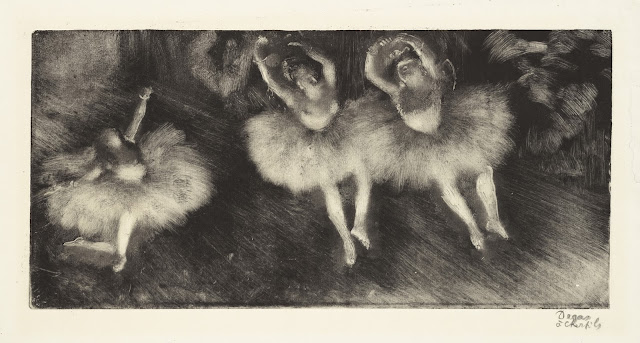 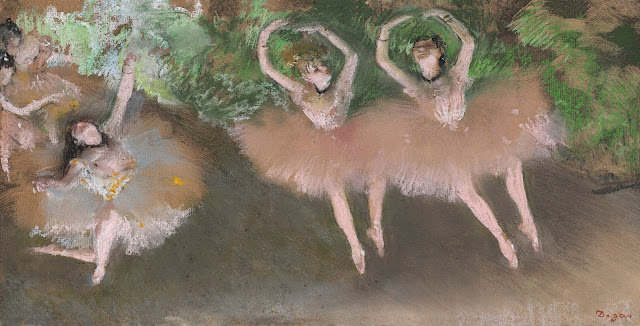 The sheer variety of subject matter in Degas' monotypes is what struck me with such force and surprise. Degas seemed absolutely determined to overturn his reputation as a talented painter of a restricted range of subjects. Perhaps the one person Degas really needed to convince was an arch-traditionalist who worshiped the memory of Jean Auguste Dominique Ingres and spurned the title of Impressionist - himself. 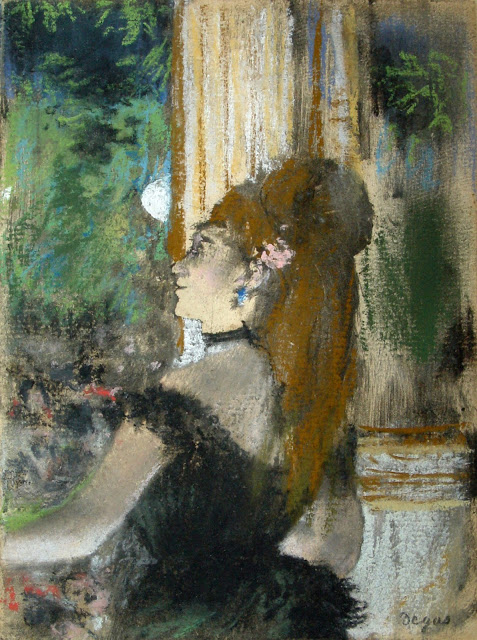 In some of his monotypes, Degas achieved profound levels of individuality and spontaneity, as in The Singer. One can almost feel the electrical charge surge through the chanteuse de café-concert  as she prepares to sing. It is a virtuoso image, a depiction of the act of song, of the incarnation of melody.

With his Frieze of Dancers, on the other hand, Degas created an image of poetry in motion. This monotype approaches the effect of Eadweard Muybridge's human and animal "locomotion" photo series.

Instead of a scene of marble gods and satyrs, frozen in time on a temple pediment, Degas' Frieze of Dancers depicts potential energy turning kinetic. His ballerinas, lacing their slippers, are like coiled metal-springs at the moment of release.

There were other aspects of his embrace of monotype printing that confirm and confound what we thought we knew about Degas. There are the expected Degas nudes, views of women sponging themselves, emerging from their baths. But more unsettling are the haggard prostitutes, "waiting for the client." Their sad faces and tired bodies mark them as drudges in the nineteenth century sex industry.

Degas' brothel scenes are devastating, more so than Picasso's Les Demoiselles d’Avignon. In their frank, matter-of-fact depiction of bodies for hire, they reduce both the artist and the art lover to the status of voyeur. There is no gawking at these unfortunate women for the sake of discussing the influence of African motifs as in Demoiselles. If you look at Degas' nude women, you are implicated. It is that straightforward. Degas does not let us - or himself - off the hook.

Fortunately, the Degas exhibit has a further surprise in store - a most pleasant one. In 1890, Degas visited Burgundy and was inspired to create landscapes, more ethereal than realistic. This uncharacteristic interest in landscape art revived Degas' utilization of monotype printing which had declined during the late 1880's. 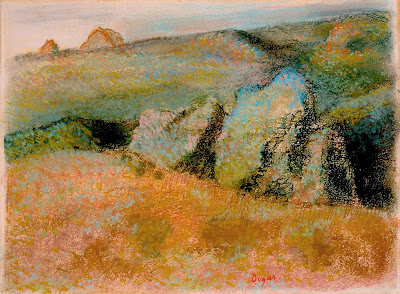 Except in two or three cases, the scenery depicted by Degas in these astonishing monotypes did not correspond to actual geographic localities. Like the "late Turner" landscapes, which are now viewed as a foundation of Modern Art, these sites existed in a distant realm not to be found on any map.

Both Degas and Turner were aging artists, struggling against time and bodily infirmity. As they created their near-abstract landscapes, the "real" world faded around them. This was literally the case for Degas, whose eyesight began to fail in the mid-1870's, just as he took up printing and pastels to create these incredible monotypes. 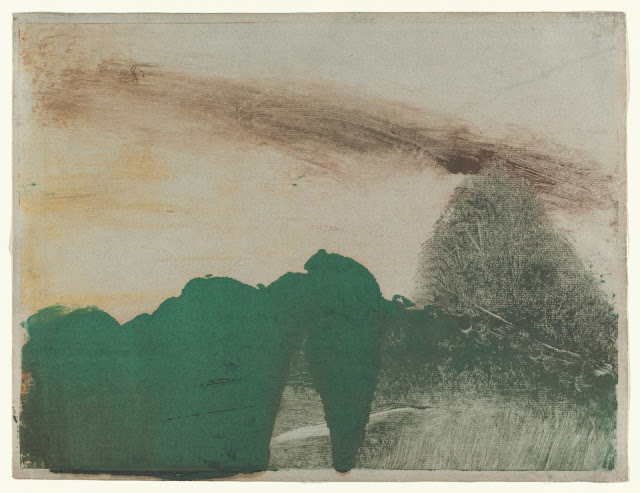 The "mind's eye" of  Degas, however, remained unimpaired. The poet, Stéphane Mallarmé, fittingly described the monotypes of Degas as having "a strange new beauty."

Thanks to this MOMA exhibit we are finally able to appreciate Degas' character and the courage and honesty which he brought to the creation of great art, monotypes in particular. These previously overlooked prints help us to realize that Degas was not a man of contradiction but rather struggled to achieve inner harmony through his art.

Degas declared that he "should like to be famous and unknown." In their first major Degas exhibit, MOMA has insured that his fame will grow, even as his life becomes a little less of an enigma.

Posted by Art Eyewitness at 1:56 PM