Van Dyck: The Anatomy of Portraiture at The Frick Collection 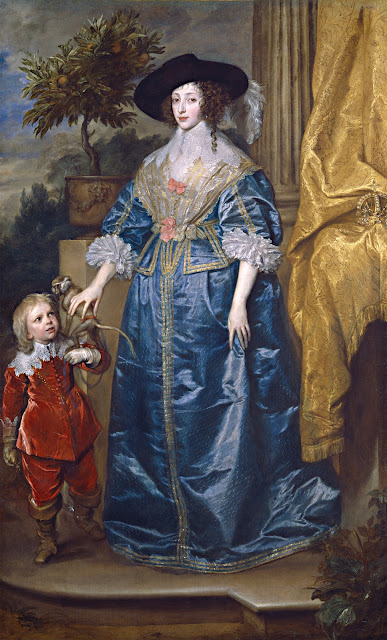 Van Dyck: The Anatomy of Portraiture

The list of foreign artists who have found fame and fortune in Great Britain - or refuge, at the very least - is a long one. Hans Holbein, Claude Monet and John Singer Sargent are just a few who achieved success or gained inspiration on British soil.

One artist who "crossed the Channel" made such a mark that it seems incredible that he was not British-born.  Anthony van Dyck (1599-1641) influenced the visual culture of Britain so profoundly that Thomas Gainsborough (1727-1788) invoked his name from his deathbed almost a century and a half later.

"We are all going to heaven," gasped Gainsborough with his dying words, "and van Dyck is of the Company."

Van Dyck: The Anatomy of Portraiture, now on display at the Frick Collection in New York City, demonstrates the exceptional skill and versatility that earned van Dyck this singular acclaim.

It is highly appropriate that this exhibition is being mounted by the Frick Collection, for it has one of the finest collections of van Dyck's works in the world.

By a great stroke of fortune - in more ways than one - Henry Frick was able to buy a matched pair of van Dyck portraits, of the painter Frans Snyders and his wife, Margareta de Vos. Unlike so many husband-wife matched portraits from the Old Master era, these two were not separated.  They can be regularly seen together at the Frick and they anchor this special exhibit of van Dyck portraits.

Van Dyck: The Anatomy of Portraiture enables us to see beyond specific masterpieces in order to gain an appreciation of the entire oeuvre of van Dyck's portrait painting. The exhibit cogently integrates van Dyck's preparatory works with his celebrated portraits in oil and less famous etchings. 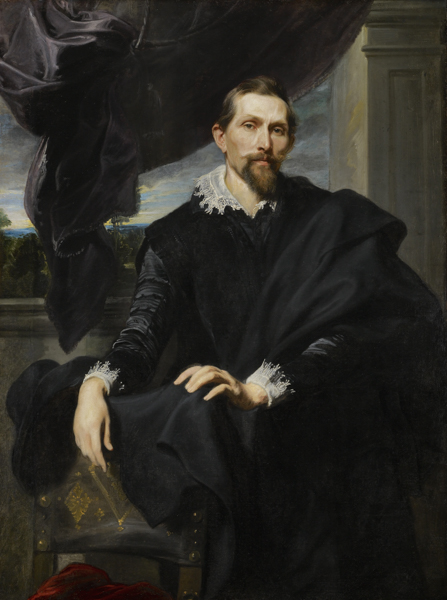 The portraits of Frans Snyders and Margareta de Vos testify to van Dyck's well-earned place in the grand tradition of Flemish painting.  But the great age of Flanders was nearing its end by the time that van Dyck painted Frans Snyders and Margareta de Vos. It was in the wider arena of Europe that van Dyck made his mark, in Great Britain most of all.

A youthful Anthony van Dyck first visited Britain for about six months, October 1620 to March 1621. Returning a decade later, he was appointed "principal painter in ordinary to their Majesties" and was knighted by Charles I. 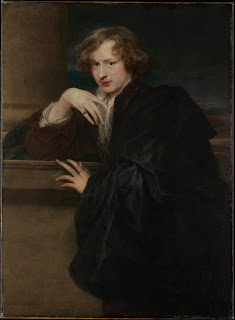 
Accounts of his lifestyle made "Vandyke" - as he anglicized his name - seem more of a nobleman than some of the "milords" he painted. As his numerous self-portraits reveal, van Dyck possessed a highly-developed self-regard.

Van Dyck's rapid rise was founded upon his consummate skill. He masterfully captured the character and individuality of the members of Britain's ruling class and of the Italian nobility during his sojourn there, 1621-1627.

The salient traits of a van Dyck portrait are not the arrogance or conceit that one might expect of seventeenth century aristocrats. Certainly, there are some portraits proclaiming the inflated dignity of van Dyck's protagonists. But elitism was largely a defense mechanism as royal and aristocratic privilege were threatened on many fronts.

When viewing a van Dyck portrait from his 1630's classic decade, what we see most often is fear, melancholy or blank inscrutability spread across these handsome English and Scottish faces. This was the generation who had been admonished in 1624 by John Donne, "never send to know for whom the bells tolls; it tolls for thee."

Van Dyck, naturally, aspired to a very different tone for his art. He wanted to be the "prince of painters and the painter of princes" as his mentor, Peter Paul Rubens (1577-1640), had been. For a brief few years, during the the 1630's, van Dyck seemingly had achieved his goal at the court of Charles I.

At first glance, the monumental portrait of Queen Henrietta Maria, the French-born wife of Charles I, overwhelms us with a sense of majesty. Van Dyck lavished a huge amount of time and talent on the preparatory sketch, done with chalk on blue paper. 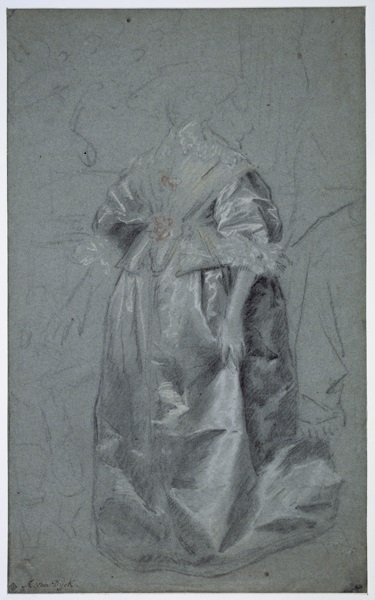 The fabrics in the sketch glisten and evoke a tactile feel in the same way, if not to the same degree, of the finished work. This is a masterpiece of draftmanship and it is no wonder that this sketch is a prized work in the collection of the École Nationale Supérieure des Beaux-Arts, Paris.

The most telling element of this sketch, however, is the faint, almost invisible, trace of Henrietta Maria's head. Forsaking preparatory drawings, van Dyck reserved the special magic of his painterly technique to achieve a likeness of the queen.

Van Dyck learned his trade from Rubens but the methods they employed in portraiture were vastly different. Rubens made exquisite preliminary sketches, which the Metropolitan Museum displayed in a memorable exhibit during the winter of 2005. Van Dyck, on the other hand, depicted the features of those he painted by intensive scrutiny during sittings. He methodically creating a "living" image through layer after layer of carefully applied color.

The special achievement of the Henrietta Maria portrait is the way it evokes the queen's outward reserve. This magnificent painting does not portray hauteur or conceit. Rather, it is a masterpiece of not showing any emotion. It is a portrait as a mask of concealment. 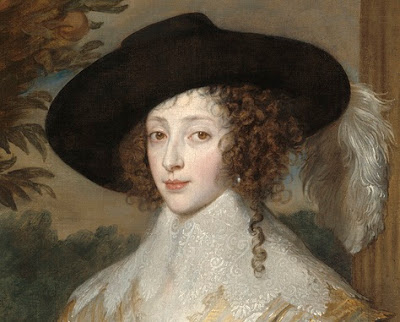 Queen Henrietta Maria, as a French woman and a devout Roman Catholic, was placed in an impossible situation following her marriage to Charles I in 1625. She was never actually crowned Queen of England because of her staunch Catholicism. In militantly Protestant England, Henrietta Maria had to watch her every move and work behind the scenes. This she did, using her influence to aid Catholics in Britain. This only inflamed her Protestant opponents all the more.

Van Dyck was also a devoted Roman Catholic, living and working in what was essentially "enemy" territory. While he was in Italy during the 1620's, however, van Dyck may have felt more secure or perhaps his Italian patrons were less threatened by religious conflict. The portraits that van Dyck painted in Italy are generally less marked by the Hamlet-like introspection that is a notable feature of those he did in Britain.

There is one magnificent exception among van Dyck’s Italian portraits that defies easy categorization.  Shortly after arriving in Italy, van Dyck painted the portrait of the Roman Catholic prelate, Cardinal Guido Bentivoglio. For me, this is the most arresting and unforgettable work in the exhibition. 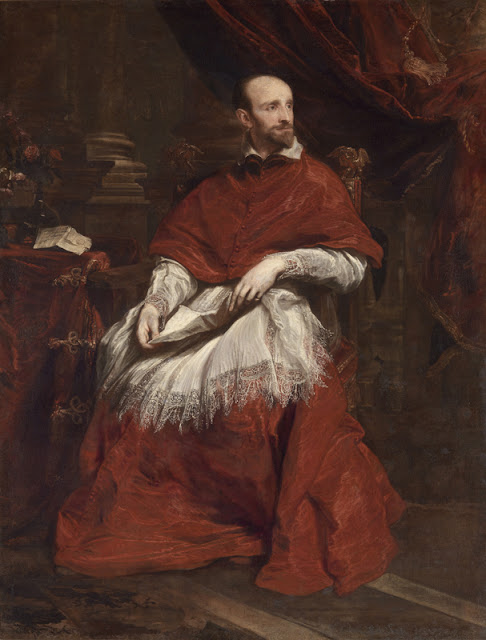 I had never seen van Dyck's Cardinal Guido Bentivoglio before. Yet, there is an ineffable "something" in Bentivoglio's expression. If you examined this masterpiece year-after-year, you would be no closer in getting to the emotional core of Cardinal Bentivoglio than after a fleeting glance.

Bentivoglio was a man of contradiction. He was a brilliant scholar and an able diplomat for the Papacy. However, his face as depicted by van Dyck is that of a mystic, not a man of learning or of worldly affairs.

Although Bentivoglio was one of the last in a long line of Renaissance humanists, he voted against Galileo at his trial. Bentivoglio was a patron of Claude Lorraine and of Girolamo Frescobaldi, one of the most influential musicians and composers of the seventeenth century. Yet, there is not one visual reference to art or to music in this painting.

For all the intricate detail involved in painting Bentivoglio's white linen surplice, I suspect that van Dyck was not much concerned with the external trappings of the Cardinal's life. Rather, he depicted the enigma at the heart of this "prince of the church" - and of all mortal men and women.

There is  perhaps no more intriguing aspect of human existence than the way that children grow into adulthood. Significantly, portraying children was another point at which van Dyck excelled. As Paul Johnson comments in his great study, Art: a New History, "No one ever painted childhood and youth better than this sensitive and engaging Fleming." 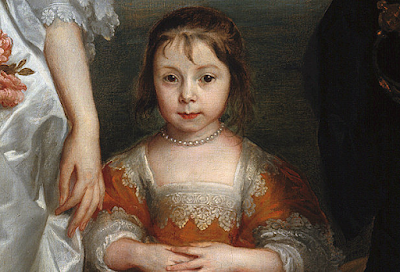 "Sensitive and engaging" are the words to describe the portrait of the daughter of Lord Strange, Earl of Derby. The young girl was most likely Henrietta Stanley (1630-1685). Posing between her parents, she was painted by van Dyck with an astute grasp of character. Looking at her, we realize that van Dyck was well aware that children are not merely adults in embryo but are unique individuals at every stage of their lives.

This insight into human nature and development is readily apparent in one of van Dyck's supreme achievements, The Five Eldest Children of Charles I, 1637.

Van Dyke's group portrait is not among the works at the Frick exhibit but rather exerts a virtual presence. This famous work hung above the breakfast table of Charles I at Whitehall and remains one of the most renowned paintings in the Royal Collection. It is chiefly known by the image of the future Charles II resting his arm on the head of a huge mastiff. To the right of the young Charles are two princesses, Elizabeth and Anne.

On exhibition at the Frick is an oil study of Princess Elizabeth and Princess Anne used by van Dyck to complete The Five Eldest Children of Charles I. Working with very young children, he elected to follow Rubens' example and do preparatory sketches of the facial features of his subjects. 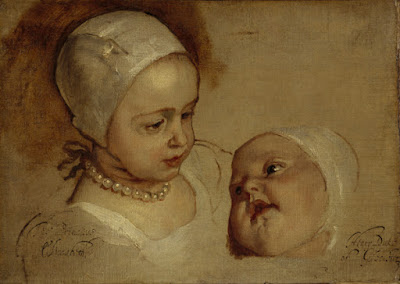 Anthony van Dyck, The Princesses Elizabeth and Anne, Daughters of Charles I, 1637

This is a tremendously compelling work. Tragically, baby Anne died from tuberculosis in 1640. Elizabeth, at age fifteen, succumbed to the same disease ten years later. Queen Henrietta Maria maintained that she died from a broken heart after hearing of the execution of her father on orders of Parliament.

By the time Charles I was executed in 1649, van Dyck had been dead for almost a decade. Worn out by his staggering work load, the "sensitive and engaging" painter from Flanders died on December 9, 1640. His "grand manner" world was crashing down around him, with the Thirty Years War devastating Europe and civil war erupting in Britain.

Among the unfinished works in van Dyck's studio was an oil painting of a woman whose identity has not come down to us. 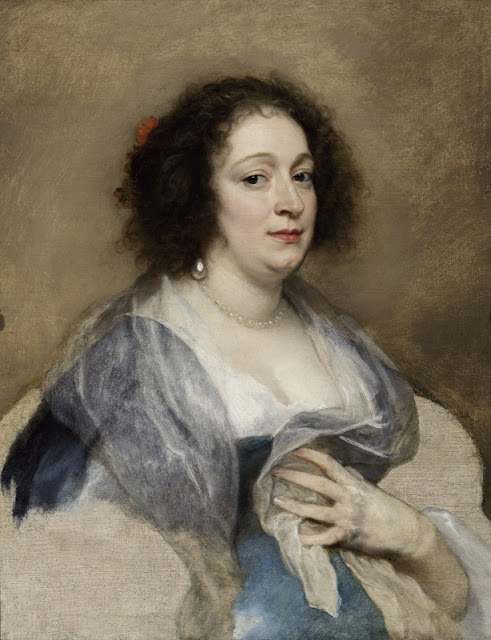 Once a great beauty, she appears just past her "prime" in this magnificent portrait. Everything about her is starting to diminish or decline. Her hand claws at her heart. The look of wry self-knowledge in her eyes speaks volumes for her, for van Dyck and to us.

In probing the ultimate mystery and majesty of life, van Dyck had no peers and few equals. All the kings and queens, dukes and duchesses, whose portraits grace the galleries of the Frick are long since passed away. But the human soul is immortal. This is what Anthony van Dyck painted to perfection - or as close to it as any artist can go.

Posted by Art Eyewitness at 9:09 AM