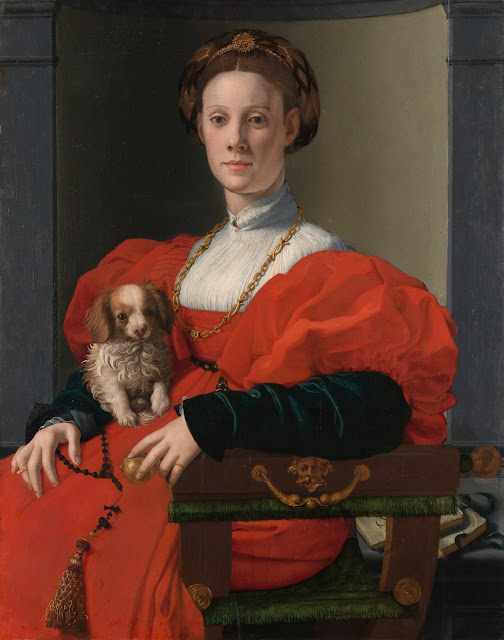 The Städel Museum in Frankfurt, Germany, is one of Europe's most innovative museums. The recent Städel exhibition, Maniera: Pontormo, Bronzino and Medici Florence, presented art works from one the most contentious periods of European history, Italy during the mid-1500's.

The accompanying volume to this exhibit, published by Prestel, is a work of art in itself. The abundant illustrations include copies of paintings not on display at the Städel, thus enabling more thorough comparison with those on view. The perceptive essays in the book, edited by the noted historian, Bastian Eclercy, raise many important questions - and answers -  about this controversial chapter of the Renaissance. 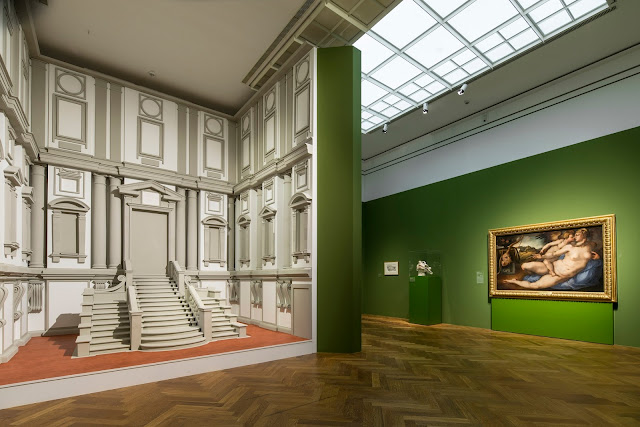 Why Italian art of the 1500's should be a "difficult" subject can be explained in one word: mannerism.

The Städel exhibit uses the Italian word, maniera, rather than the more familiar and dismissive Mannerism. In modern scholarship, maniera points to the many and varied interpretations of art that flourished in Italy during the 1500's.

This change of terminology and the inspired efforts of the Städel Museum curators redirect our attention away from theories about Italian art of the 1500's to the art works themselves. It is a noble endeavor, a much needed one and it almost succeeds.

Mannerist art gained its clouded reputation because decisive changes were held to have occurred in Italy during the 1520's - and not for the better. 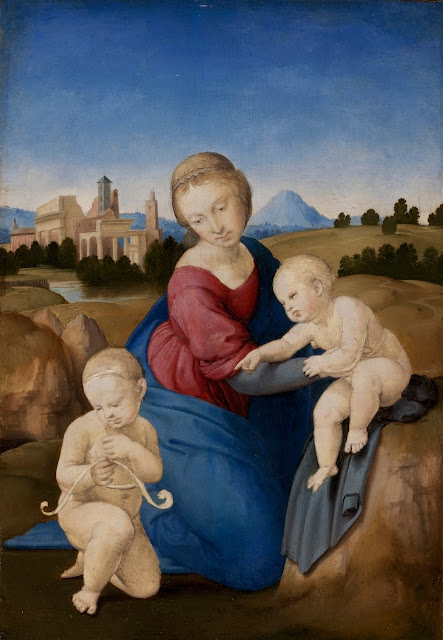 Leonardo da Vinci and Raphael were dead by 1520 and art was at an impasse following the death of these inimitable masters. Likewise, Italy was ravaged by war, climaxed by the sack of Rome in 1527. The art that was created following these terrible events was held to reflect a devastating emotional malaise.

Some of the masterpieces displayed in the Städel exhibit and the Prestel catalog show the impact of the Italian Wars. Jacopo Pontormo's St. Jerome as Penitent was painted a year after Protestant troops employed by the Catholic Holy Roman Emperor, Charles V, pillaged the city of Rome. Charles V aimed to teach Pope Clement VII a lesson about power politics. Eight thousand people were murdered and the holiest city of  Christendom was desecrated. 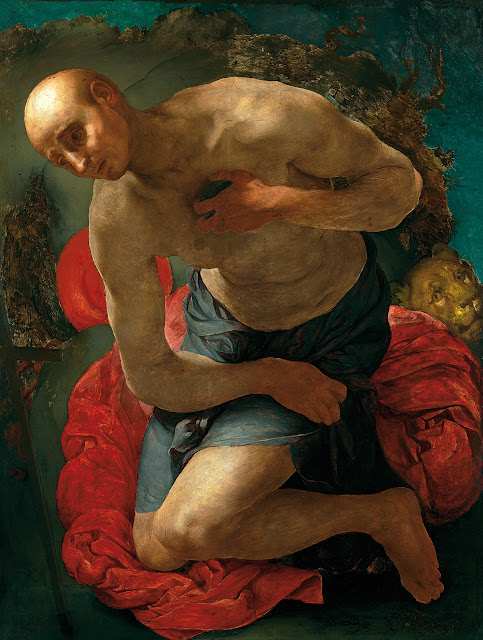 Pontormo's St. Jerome beats his chest with a rock, having flung aside his cardinal's robe. It is one of the most searing images of a soul in agony in Renaissance art. Utterly realistic, yet surreal in its effect, Pontormo's St. Jerome powerfully evokes physical and spiritual torment.

How different is Pontormo's St. Jerome as a Penitent to the absorbed, scholarly St. Jerome of Albrecht Durer's famous engraving, dating to 1514. Nor does St. Jerome's companion, the lion, sleep contentedly as Durer depicted him. Instead, the lion in Pontormo's version looks upon the naked, suffering man with a look of incredulity... as we are likely to do, the more we study this amazing painting.

However much the tragic slaughter in Rome oppressed the minds of Renaissance painters, the sad fate of Florence had a profound effect as well. The headlined artists in the Städel exhibit, Jacopo Pontormo (1494-1556) and Agnolo Bronzino (1503-1572), were both Florentines. They witnessed the destruction of the political liberties of Florence, crushed by the resurgence of  Medici power - glittering, bountiful and despotic.

Pontormo learned his craft in the studio of Andrea del Sarto, one of the greatest Renaissance masters of desegno or drawing. This was the specialty of Florentine artists and Pontormo took del Sarto's lessons to new levels of excellence. One of the outstanding works in the Städel exhibit is a drawing in red chalk which for many years was mistakenly ascribed to del Sarto. 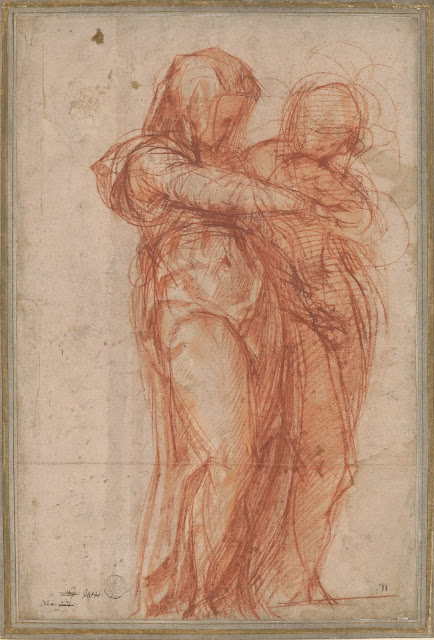 Study of Two Standing Women was proven, as far back as 1958, to have been drawn by Pontormo. It has still to be properly acclaimed, for as Eclercy writes in the Prestel catalog, "it has not received the attention it deserves: it is, after all, one of the single most virtuoso drawings of Pontormo's early phase."

The sense of energy, potential and kinetic, of this drawing, dated to 1515, is incredible. We can see a prefiguring of the writhing movement of the tormented St. Jerome in this drawing. Even more remarkable, is the way that we sense the flow of power, of vigor, that will propel the bodies of these women forward and off the page.

If a thread of development can be traced from Pontormo's early sketches to his St. Jerome as Penitent, that is a rare case of continuity. Pontormo was one of the most searching and eccentric artists in history. His famous Deposition from the Cross - which did not appear in the Städel exhibit - has a brilliant color scheme totally at odds with its somber subject. Nothing in Pontormo's variegated work, however, prepares us for the mythology-themed paintings which he created in the 1530's. 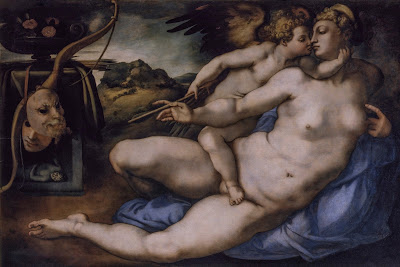 
Venus and Cupid is a "pagan" work of art, not unlike the first century frescoes that would be discovered in Pompeii centuries later. But Pontormo was a Christian artist and so was his disciple and student, Agnolo Bronzino. Here was "mannerist" art that was a radical departure from anything that had come before.

Bronzino painted his version of Venus and Cupid, even more sexually charged, around 1545. It did not appear in the Städel exhibit. Instead the exhibit wisely focused on Bronzino's portrait painting. During the 1530's, portrait commissions shifted from providing images of saints or clergymen to "power portraits" - Medici power.

Florence was a city with a strong tradition of civil liberties. Around the time of the sack of Rome, the Florentines took advantage of the turmoil in Italy to re-establish their cherished Republic. But a catastrophic outbreak of plague claimed 36,000 lives.

Alarmed at this resurgence of political independence in Florence, Charles V, Pope Clement VII and the Medici staged a rapprochement. They conveniently "forgot" about the sack of Rome. The desperately weakened Florence was besieged by their forces and fell after a heroic resistance in August 1530.

Political liberty was dead in Italy and artists like Pontormo and Bronzino had to adapt.

Bronzino was a brilliant portrait painter, as can readily be seen in his Portrait of a Lady in Green, painted between 1530-32. It is a work in the evolving tradition of Renaissance portraiture whereby the life-like image of the sitter permits insight into her inner character as well. 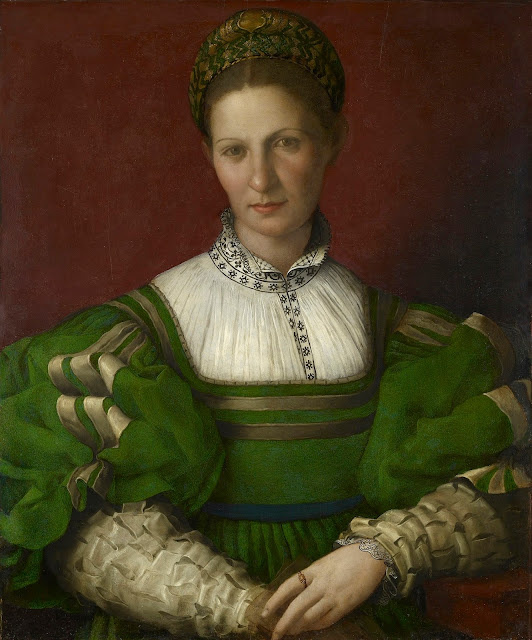 Psychological insight of the kind that Bronzino showed in Lady in Green in 1530 was no longer desirable in 1537. The Medici, restored to power, wished to be depicted as austere, unflinching authority figures. Having little real power, these Italian nobles wished to be seen as all powerful.

Bronzino's Portrait of a Lady in Red, which serves as the introductory image of this review, is believed to represent Francesca Salviati, the aunt of a Medici duke, Cosimo I. It is tremendously accomplished in many ways. Yet, it is a disturbing work, very much of the kind that has raised "red flags" about Mannerism.

The impassive, "ice goddess" countenance of the Lady in Red is really a mask rather than an accurate likeness. The face is almost androgynous and is drained of individuality, empathy and the marks of life experience. Lady in Red is a Renaissance Athena, a personification rather than a person. 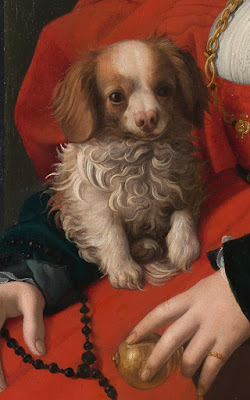 Agnolo Bronzino, Portrait of a Lady In Red, (detail)

Looking closely at the charming, skillfully-modeled lapdog held by Lady in Red, I wonder if Bronzino was making a sly comment on the restored Medici regime in Florence. As Speaker of the House, Sam Rayburn, used to say of the treacherous backstabbing in Washington D.C., "If you want a friend in this town, get a dog."

Debate has long raged over whether Mannerism represented a decline in standards or a reformulation in Renaissance art. These shifts in appraisal are examined in an excellent essay in the Prestel book.

During the 1500's, it was the judgment of the Catholic Church on the merits of Mannerist art that carried the most weight. When a Christian martyr, St. Sebastian, was depicted by Bronzino as a smiling, beautiful, nearly-naked boy, pierced by a Cupid's arrow, the reaction of the Catholic Church was not hard to predict. 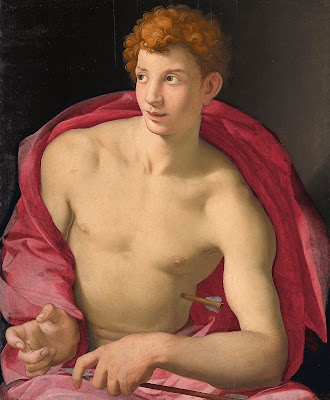 In 1545, Church leaders convened the Council of Trent to reform  Christendom following the Protestant Reformation. Religious art was a major agenda item.

If a work of religious art fails to stimulate a Christian's ardor, then Paleotti wrote "we must be made of marble or wood if we do not feel deeply moved, if our piety is not stimulated afresh and our inner being is not deeply affected by remorse and devotion."

In the eyes of the Church, a statue or a painting that remained "marble or wood" rather than a testament of faith was deeply offensive.  Artists who created such works were censured, even the great Michelangelo. 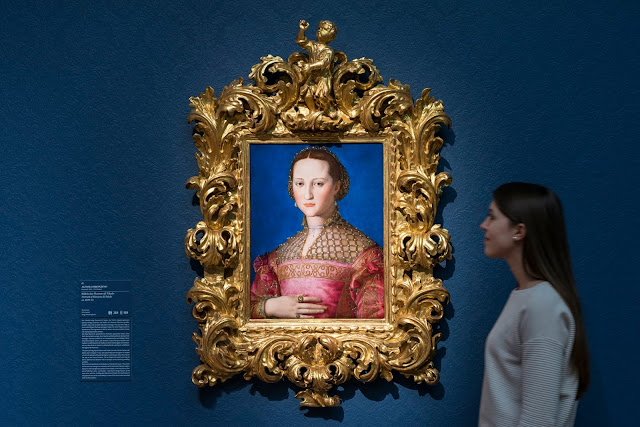 The debate over Mannerism which began with the Council of Trent has continued to this day. It is never likely to be resolved because the issues involved were meaningful  in the 1500's and remain so. True religious art cannot remain a thing of "marble or wood." Yet artists must have the freedom to create works in their own "manner."

The outstanding effort that went into Maniera, both the Städel exhibit and the Prestel catalog, represents a major step in judging this key episode in the story of Western art. In the future dialog about Mannerism, Maniera will serve as a long-standing point of reference.

Images courtesy of the Städel Museum, Frankfurt am Main

Posted by Art Eyewitness at 7:04 PM