Sicily: Culture and Conquest at the British Museum 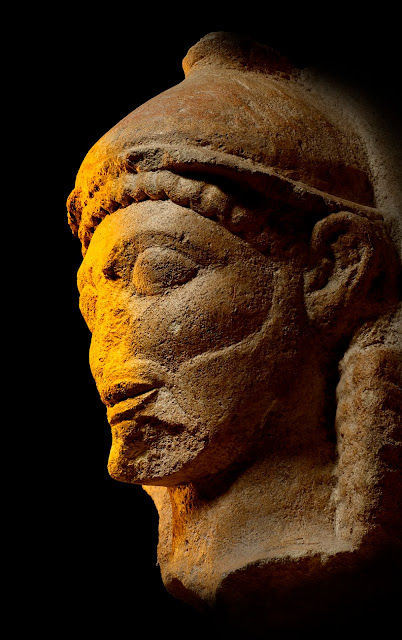 The island of Sicily is the subject of a fascinating exhibition currently at the British Museum, Sicily: Culture and Conquest. Like Sicily itself, the exhibit dazzles the imagination. And like this ancient land, there is much about the exhibit that does not "meet the eye."

Strategically set in the middle of the Mediterranean Sea, Sicily is a land of opposites. Bursting with fertility and abundance, the island is haunted by violence and death. It is the birthplace of some of the most creative masters of European culture: Archimedes of Syracuse (d.212 BC), Antonello da Messina (1430-1479) and Luigi Pirandello (1867-1936). It is also the homeland of the Cosa Nostra.

In antiquity, Sicily was the setting for one of the most significant Greco-Roman myths, the story of Demeter and Persephone. When her daughter, Persephone, is abducted by Hades,  god of the underworld, Demeter wins her release for part of the year. In spring and summer, Persephone is free. Nature blooms, crops ripen - and then comes winter. This, to the ancient Greeks, explained the regenerative cycle of nature.

But how evocative is the myth of Demeter and Persephone of the fate of Sicily! Joy mixed with an equal portion of sorrow, salvation and damnation forever linked.

There are two hundred works of art in the British Museum exhibition, covering Sicily's history from antiquity to the Renaissance. Two periods, the rise of the Ancient Greek city-states and the Norman French rule during the Middle Ages, are extensively covered. Other eras, notably the long period of Roman rule, are illustrated with only few works of art. Given the thousands of years covered by the exhibit, this imbalance was perhaps necessary. But it does have some unfortunate consequences.

An excellent place to start grappling with Sicily: Culture and Conquest is the Terracotta Altar with Three Women.

The altar comes from the Greek colony of Gela on the south coast of Sicily. It dates from around 500 BC, well after the first Greeks beached their galleys on the coast at Naxos in 735 BC.  In terms of style, this terracotta statue is early in the Greek artistic tradition and it represents religious and social themes even earlier - much earlier. 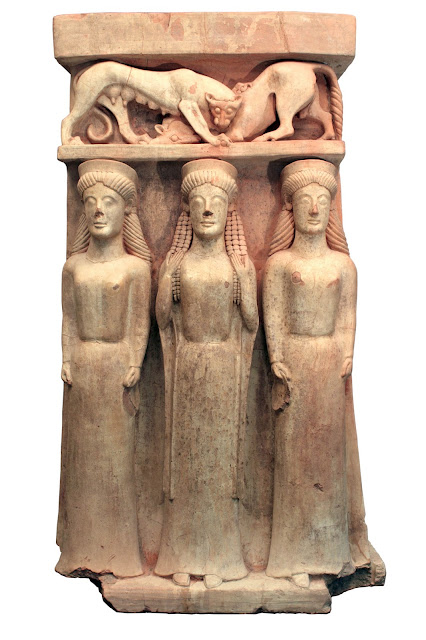 Terracotta Altar with Three Woman and a Lioness Mauling a Bull, 500 BC

Here we see Demeter and Persephone, along with another goddess, Hecate, who cared for Persephone in Hades during her months of wintry exile. Hecate was a goddess of very ancient origin. The three goddesses represent the Mother Goddess cult which preceded Zeus and the Olympian gods.

Above the three goddesses on the Gela altarpiece is a depiction of a female lion or panther savagely killing a bull. Is this violent scene a reference to the female-male conflict implicit in Persephone's abduction by Hades? Does this  bloody encounter recall a myth from the pre-Greek people of Sicily, the Sicels? We are unlikely to know with certainty.

Gela was a major site of terracotta production in ancient times.The British Museum exhibit also displays a  terracotta roof ornament with head of a gorgon from a temple in Gela. Gorgons were fearsome female deities in Greek myth whose very look could turn a person to stone. This one was likely placed to protect the Gela temple in time of war. 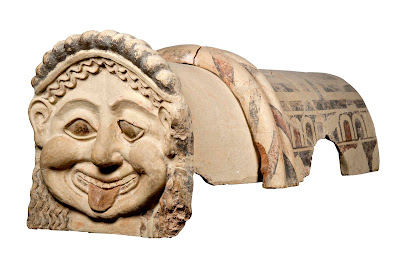 Sadly, Sicily was to figure as a battleground from antiquity to the 1943 invasion by Allied forces in World War II. The principal combat in ancient times was between the Greeks in Sicily against the Phoenician maritime power, Carthage.

The Phoenicians, originally from Lebanon, had established the major city-state of Carthage in North Africa and settlements in Sicily during the 9th century BC. These Semitic peoples were intrepid seaman, creators of the alphabet we still use and tough fighters. But they were merchants first of all. The Phoenicians preferred the art of the deal to the art of war.

There is but one work of Phoenician art in Sicily: Culture and Conquest, a mask designed to protect graves at Carthage from evil spirits. This does a disservice to Phoenician culture. Compared with the Greek art on view, it is easy to look at this grimacing image and conceive of the Phoenicians as an alien civilization. 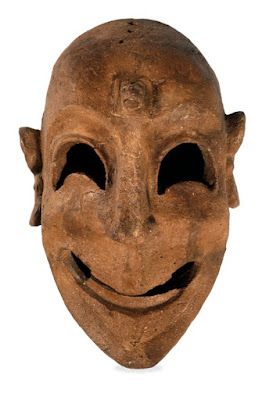 The Greeks had early developed a jealous dislike of the Phoenicians. Sicily represented  the promised land to the Greeks and they were not prepared to share it with Carthage. Syracuse, with one of the most superb harbors in the Mediterranean, became the superpower among the Greek city-states on the island. The rulers or tyrannoi of Syracuse were determined to expand their territorial holdings over Sicily.

The British Museum exhibit displays several outstanding works of "the art of war" recalling ancient bloodshed in Sicily.  A marble statue of a warrior from the city-state of Akragas (modern-day Agrigento) was created around 470 BC. It was certainly part of a monument celebrating the resounding victory over Carthage ten years before by the Greek forces commanded by Gelon of Syracuse and Theron, the ruler of Akragas. 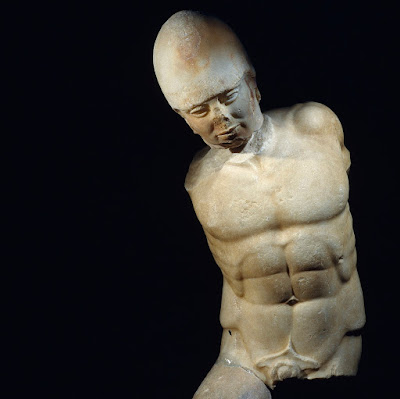 This great battle in 480 BC, Himera, was won at the same time as the victories of Athens and Sparta against the Persian invaders, 480-479 BC. The Akragas war monument was clearly intended by the Greeks of Sicily to remind their boastful cousins in the ancestral homeland that they had triumphed over the "Barbarians" as well.

After the battle of Himera, the Greeks in Sicily followed the example of Athens, Sparta and Corinth by fighting endlessly among themselves. Carthage regained much of its strength and began to reassert its power in Sicily. After a deadly chess match lasting over two centuries both the Greeks and Carthaginians were checkmated by a new player, the Romans.

Amazingly, Carthage had been an early trade partner and ally of the fledgling Roman Republic, founded in 509 BC. It took many years for the Romans to bring the Italian peninula under their rule. All the while, they watched Carthage and the Greeks wage costly wars without either side gaining hegemony  over Sicily.

In 264 BC, the Romans made their move, clashing with Carthage in the first of the three Punic Wars. The British Museum exhibit displays a truly remarkable piece documenting the "art of war"  during those terrible conflicts. 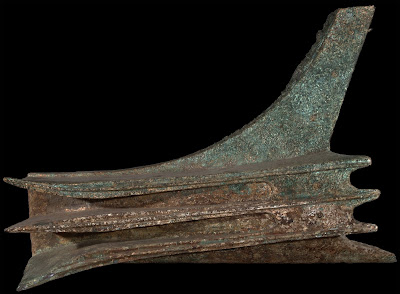 Normally,  I would hardly consider the rostrum or battering ram mounted on the prow of Roman warship as a work of art. But this menacing weapon illustrates perfectly the relentless warfare that turned Sicily into the gate of Hades for thousands and thousands of war victims, not merely for Persephone in the myth.

The rostrum was excavated from the seabed in 2008 near Levanzo, on the western tip of Sicily. Here on March 10, 241 BC, the Roman fleet smashed the naval squadrons of Carthage in the climatic battle of the war. The rostrum came from one of the 30 Roman ships lost in the battle.

Detail of Bronze Rostrum, showing figure of Victory, 243-241 BC

It is a measure of Roman determination and confidence that the bronze ram had been cast with a winged-figure of Victory.

Rome was to sustain further losses in the Second Punic War, when Hannibal invaded Italy in 218 BC. But Rome won in the end, destroying Carthage in 146 BC. Sicily was reduced to vassal status. Its rich lands were turned into vast, grain-producing estates called latifundia.

Apart from this bronze naval ram, Sicily: Culture and Conquest presents few works of art or artifacts from the Roman era. Since this period lasted for an entire millennium, up to the brief Arab conquest in 965 AD, this is a debatable curatorial decision. Indeed, it may well be a serious omission preventing a proper understanding of Sicily's history.

Sicily is the site of the greatest surviving mosaic installation of the Roman era in Europe. This is the great series of mosaic pavements at the Villa del Casale near Piazza Armerina in central Sicily. Created early in the  fourth century AD, it shows wild animal hunts and bikini-clad (or at least the Roman equivalent) female athletes.

What the mosaics of Villa del Casale really depict is the staggering difference between the privileged lifestyle of the elite of Roman society, the honestiores, and those who served them. The grinding existence of the humiliores is notably absent from these mosaics.

If the British Museum exhibits skims lightly over the Roman domination of Sicily, compensation is abundantly made in the galleries devoted to the Norman Kingdom and the the reign of Frederick II. These incredible episodes from the Middle Ages are brilliantly explored, presenting art and literary treasures of a unique realm, tolerant, multilingual and open to new ideas. 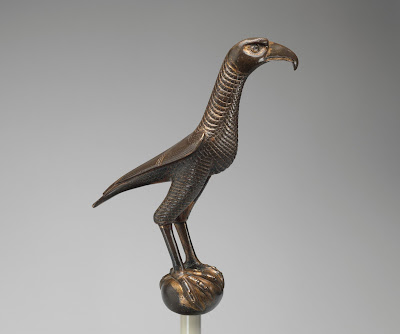 The Normans arrived in Italy as mercenary knights in 1016 AD, fighting for and against just about everybody including the Pope. The Normans, descendants of the Norsemen who had raid the north of France, were mighty warriors. Christian baptism had changed them barely at all. They were Vikings on horseback.

In  1061, the Normans launched a thirty-year campaign to "liberate" Sicily from the Arabs. The details of their campaigns and their later rule has been memorably chronicled by the great historian, John Julius Norwich in his books, The Normans in the South 1016-1130, and The Kingdom in the Sun, 1130-1194. We will concentrate on the amazing  - and unexpected - flourishing of culture under the Normans.

Like the Carthaginians, the Normans in Sicily had limited manpower. Instead of hiring mercenaries to wage war, they used others, Greeks and Arabs, to build churches, create works of art and manage the economy. 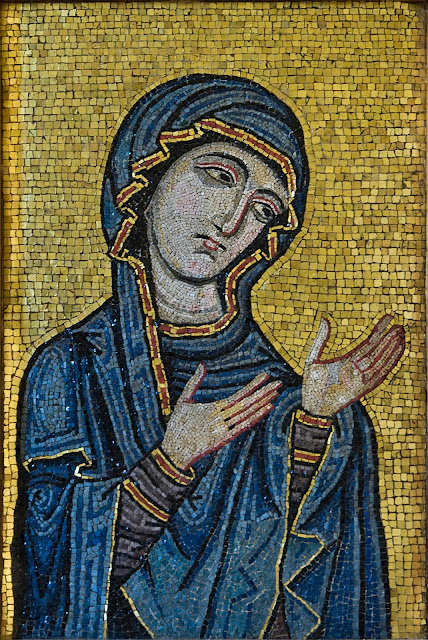 The compassion and empathy in the Virgin as Advocate is reinforced by a work which symbolizes the spirit of "coexistence"  that marked the era of Roger II. It is easy to miss this funerary piece, insignificant in size, but it is key to the medieval galleries of the exhibit. 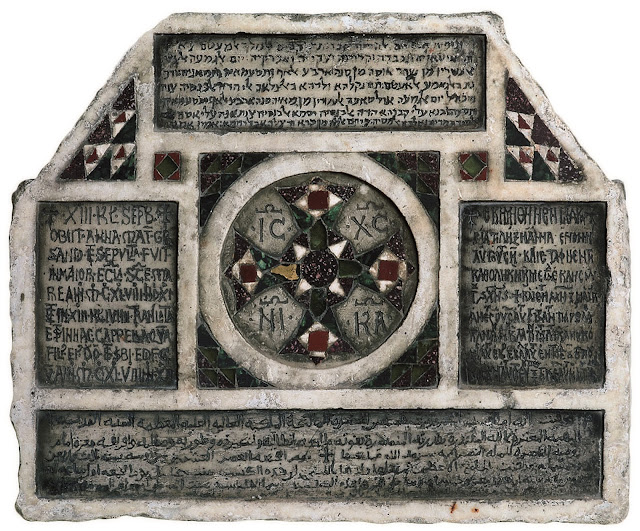 Tombstone with Eulogy to Anna, Written in Four Languages, 1149 AD

In 1149 AD, a clergyman named  Grisandus set-up this memorial plaque for his mother Anna. The eulogy was  written in the four languages used in Norman Sicily: Judaeo-Arabic (Arabic written in Hebrew script) on top, Latin on the left, Greek on the right, and Arabic below.

If only this touching, multi-language work of art could have characterized the whole course of Sicily's development from the Norman era to ours!

Unhappily, this is an "exceptional" work of art because it is an exception. Sicily's golden age came to an end when Frederick II died in 1250. The "wonder of the world" to some, Antichrist to others, Frederick was a rare example of a brilliant, tolerant and effective ruler during the Middle Ages - and today.

Sicily: Culture and Conquest concludes with a painting believed to be a work by Antonello da Messina. One of the earliest Renaissance artists in Italy to use oil paint, Antonello was a master of psychological depth as well. His Madonna, from the collection of the National Gallery of Art in London, is vastly different from the Virgin as Advocate for the Human Race. 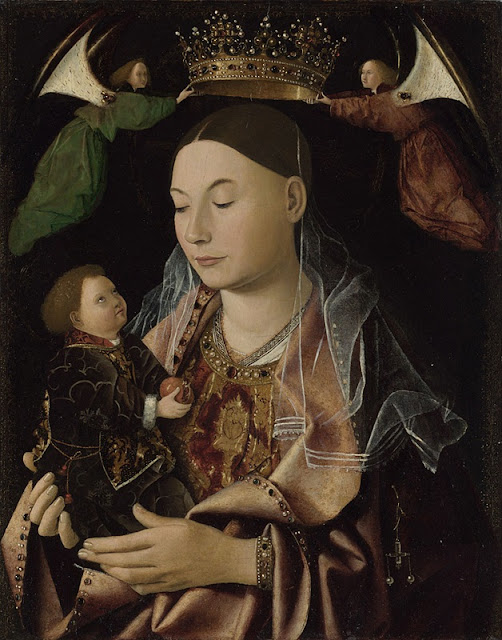 The eyes of Antonello's Madonna are firmly closed. She does not look at Jesus, who is not a child but rather a weird, doll-like man. As the angels lower a glittering crown on the Madonna's head, we become aware of the dread anticipation she feels. The pain on her face reminds us of Antonello's depictions of Christ being crowned by thorns before his crucifixion.

This jewel-covered crown may not have skin-piercing thorns. But Mary's sorrowing countenance conveys the pain it will bring. This disturbing work is entitled  - most inaccurately - The Virgin and Child.

A much more appropriate name for this strange, haunted painting springs readily to mind:

The Madonna of Sicily's History.

Posted by Art Eyewitness at 8:58 PM