Diane Arbus at The Met Breuer 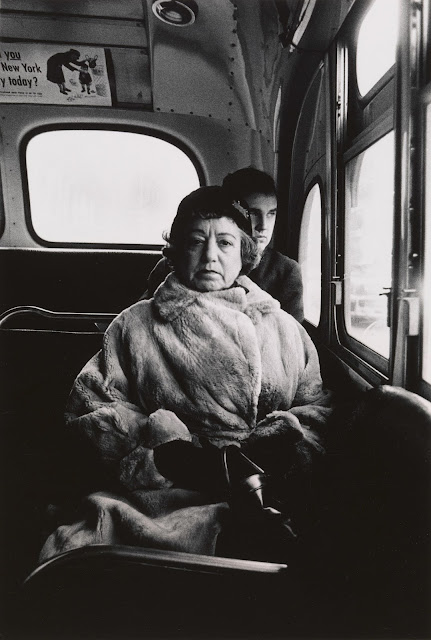 diane arbus: in the beginning

Twenty years before Robert De Niro in Taxi Driver uttered one of the most provocative questions in the history of motion pictures, Diane Arbus did the same for still photography.

Beginning in 1956, Arbus confronted 1950's America with her 35 mm camera. Her subjects were kids on the way to school, world-weary people walking down Fifth Avenue, New Yorkers at play on Coney Island, a philosophical cab driver and his chic, cigarette-smoking passenger. Their eyes confronted Arbus in return, always asking the same question:

"You looking at me?"

Arbus did look - without blinking, without concentrating on details of style or composition. It was the person she photographed who mattered. Their reaction to being noticed supplied the emotional alchemy of these unforgettable images.

"I don’t press the shutter," Arbus declared. "The image does. And it’s like being gently clobbered." 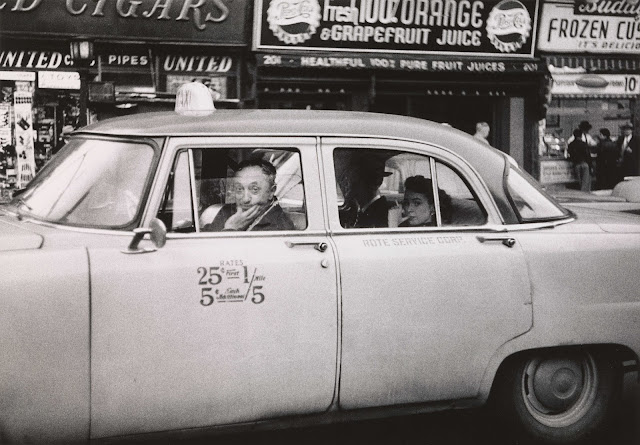 The result of these encounters is on view in the new exhibit, diane arbus: in the beginning at The Met Breuer in New York City. One hundred of her photos, taken between 1956 to 1962, document the opening phase of her career as an independent photographer. Over half of these photos have never been exhibited or published before, enabling us to see anew what Arbus saw sixty years ago.

Diane Arbus (1923-1971) was involved with photography long before 1956. As a young person, she actually corresponded with Alfred Stieglitz. Her early collaboration with her husband, Alan Arbus, produced an archive of fashion-related photography. But only after striking out on her own, did Diane Arbus find the right focus for her camera work.

At first glance, most of the protagonists of Arbus' early photos seem "normal." Look more closely and you'll see the suppressed complexity of Cold War America.

Arbus took a number of photos of children wearing Halloween masks, several on view in the Met Breuer exhibit. But I don't think any disguise could match the emotion-drained, sideways stare of Woman with white gloves and a pocket book. 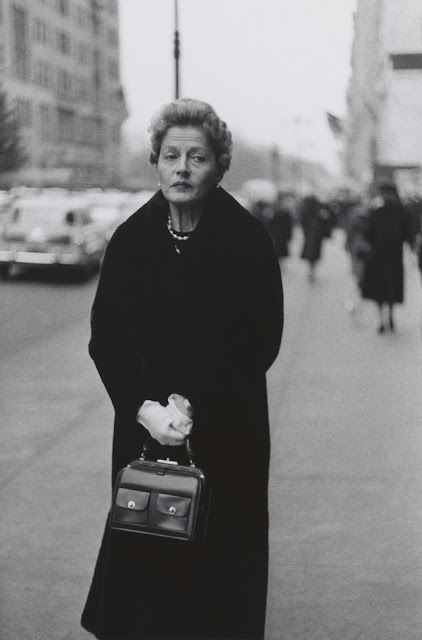 The lined, pensive face of this woman clutching her handbag is a blank canvas upon which we can place any number of interpretations. What truly was going on in this stylish woman's heart and soul in 1956 - we will never know.

The inner uncertainties and the constrained diversity of "the Fifties" were largely masked by the Madison Ave publicity machine. Arbus, snapping photos away from the glamour spots of Manhattan, saw through the pretense.

Arbus was aware of the singularity of her vision as a photographer.

“I do feel I have some slight corner on something about the quality of things," Arbus wrote. "I mean it’s very subtle and a little embarrassing to me but I really believe there are things which nobody would see unless I photographed them.”

Very few photographers of that era could have matched the insight of Arbus with her photo, Backwards Man in his hotel room, N.Y.C. 1961. Backwards Man was contortionist Joe Allen who worked in Hubert’s Dime Museum and Flea Circus on Times Square. Here he is posed like a veritable Janus figure, looking into the glare of a hanging light bulb while his feet are pointed in the opposite direction.

Arbus was a brilliant writer, as perceptive in word as she was with images. Her writing, however was largely confined to her notebooks. It is one of the many strengths of this exhibit, superbly curated by Jeff Rosenheim of the Metropolitan Museum, that we are enabled to grasp the wisdom of Arbus - and her literary skill . 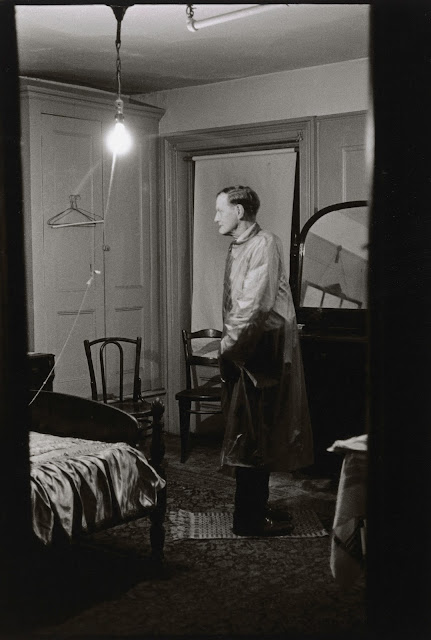 Diane Arbus, The Backwards Man in his hotel room, N.Y.C.1961

Writing about Backwards Man, Arbus deftly defused all the later commentary on her supposed obsession with abnormality. Instead of seeing Backwards Man as a "freak," Arbus visualized him as "a metaphor for human destiny – walking blind into the future with an eye on the past."

Backwards Man does indeed figure as a "metaphor." But Arbus was obsessed with exploring human uniqueness as well as universality.

With Female impersonator holding long gloves, Hempstead, L.I.,1959, Arbus created a remarkable synthesis of both the symbolical and the individualistic. This photo also prefigures some of the "iconic" Arbus pictures of the 1960's. But to do justice to Female impersonator, you need to forget later pictures and the incidental details of the photo itself.

Ignore the make-up, the ear-rings and the arching eye brows. The most extraordinary details of Female impersonator are the two points of light reflected on the irises.Were these reflections of the flash of Arbus' camera? Or did they come beaming out, laser lights from the Impersonator's soul, recorded by Arbus and then transmitted to us, the viewers? 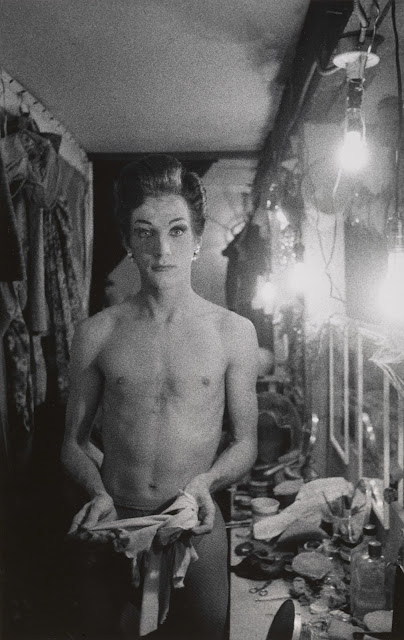 According to the scientific principle known as Occam's razor, the simplest explanation is usually the one more likely to be correct. But I'm going with second explanation - subjective and impressionable. The "encounter" of each photo's protagonist with Arbus and then via her photo to us is what is currently taking place at the Met Breuer every time someone looks at these incredible images.

Every time we encounter Diane Arbus photos in this spirit, the protagonists cease to be "freaks," eccentrics, the other. Then they become what Arbus saw as she first took the photographs - fellow human beings.

Arbus summoned a wide range of emotional responses from her protagonists - from the slightly ruffled dignity of the Lady on a bus, N.Y.C., 1957 to fear in Girl with a pointy hood and white schoolbag at the curb, N.Y.C. 1957. Here a young school child suspiciously eyes Arbus just as Little Red Riding Hood viewed the Big Bad Wolf.

Arbus had an amazing facility in photographing children and teens, perhaps because she was a mother of two daughters, Doon and Amy. Was it maternal instinct that prompted an awareness of the symbolism of the street curb to young people in the journey of life? Whether departing from Camelot on the Grail quest or dodging traffic in the Bronx, taking the first step off the curb is a big moment.

Most of the time, this journey is made in complete anonymity. Nobody knows where we are are going. Nobody really cares to know. The surprised reaction in Boy stepping off the curb, N.Y.C. 1957–58 is in response to being regarded and appreciated. For a brief moment, the universe has taken notice of this boy and his "grail quest," wherever it might lead. 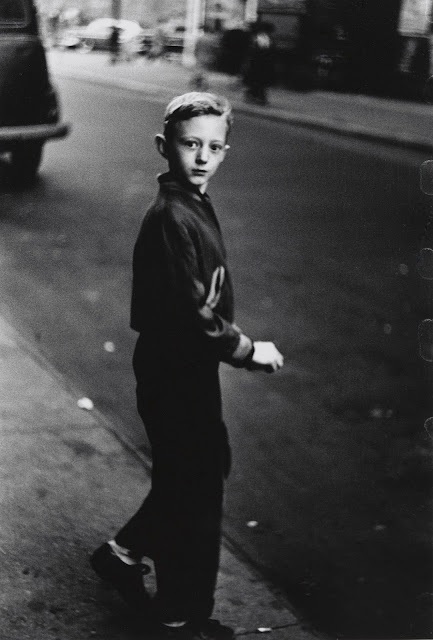 The look on the face of Boy stepping off the curb is also the shock of recognition. What this skinny kid in the baseball jacket was doing, Arbus, the pioneering street photographer, was doing too. They were kindred spirits. The expression of the boy testifies to his awareness that each was taking a big step forward.

What took Arbus so long in making her own initial foray into independent photo journalism is one of two key questions of her life's story. Why she took that step at all is the second - and is much more difficult to answer.

As the Met Breuer exhibition perceptively notes, Arbus began taking courses in photo technique in 1956 with Lisette Model, an Austrian-born photographer (1901-1983). Model had studied music under Arnold Schoenberg before transferring her abundant talents to photography. Model subscribed to a direct, wide-ranging and brutally honest mode of street photography. Arbus proved an apt pupil.

The lessons with Model triggered the venture of Arbus into hard-edge realism. The "why" Arbus did so is perhaps best explained by her cryptic comment that "Nothing is ever the same as they said it was. It’s what I’ve never seen before that I recognize."

Arbus came of age in Depression-era America but felt few of the economic and social effects of that terrible era. Her father, David Nemerov, directed Russeks Department Store, an elite Fifth Ave establishment founded by her mother's father. Arbus' entry into the world of photography was initiated by her father, who employed her and her husband, Alan, to take publicity pictures of the store's fashion collection. This led to photos for Vogue and Harper's Bazaar, dream assignments for an American woman of the 1950's. Or so it would seem.

When Arbus took her first step toward artistic independence, she went straight to the increasingly "mean"streets, straight to the margins of American society. The photos which Arbus took "in the beginning" mark the start of the 1960's counter-culture revolt. She was ten year's ahead of schedule.

The Met Breuer exhibit is brilliantly mounted, allowing art lovers to dispense with theme and chronology. One wanders though these astonishing images as Arbus did through the streets of 1950's New York. 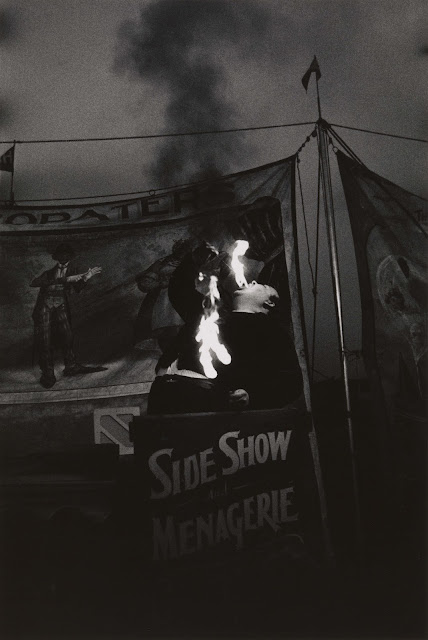 There is no "end" or "final" photo of the exhibit. However, Fire Eater at a carnival, Palisades Park, N.J. 1957 points to the ultimate conclusion of Arbus' life quest: her tragic suicide in 1971.

Arbus was a supremely talented artist and a deeply conflicted person. Her photos reveal her awareness of the nightmare side of American life at a time when the American "Dream" was being used to counter the spread of Communism and to promote the credo of Consumerism. Arbus clearly identified with the "down and out" strata of American society, those excluded from the "Dream."

Like the Fire Eater in her photo, Arbus gulped down a lot of pain, a lot of the suffering of others. But life is no stunt, no conjuror's trick and Diane Arbus "in the end" swallowed one flame too many.

Posted by Art Eyewitness at 9:40 AM