Embracing the Contemporary at the Philadelphia Museum of Art 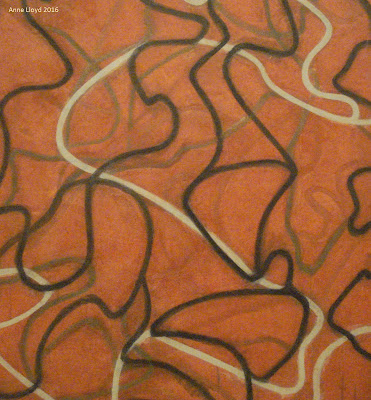 Embracing the Contemporary: The Keith L. and Katherine Sachs Collection of Contemporary Art

There was a moment during my visit to the Philadelphia Museum of Art's exhibit, Embracing the Contemporary, when the opposite  of the title words occurred. The art "embraced" me.

Embracing the Contemporary; the  Keith L. and Katherine Sachs Collection presents masterpieces of art created during the last fifty years. The collectors are a dynamic husband-wife team who have promised their collection to the Philadelphia Museum of Art. 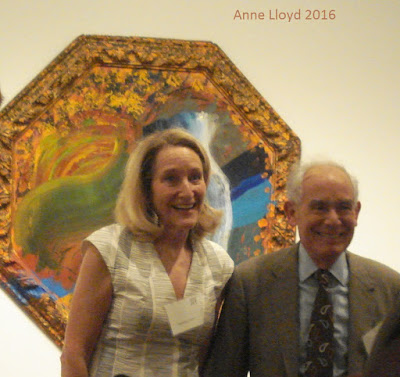 Katherine and Keith Sachs at the Embracing the Contemporary Exhibit

It was neither this commendable generosity nor their appreciation of contemporary art that made such an impression. Rather, it was a sense of the living reality of art - art pulsing with life, ideas, awareness - that struck me as I examined works by Brice Marden, Jasper Johns and Ellsworth Kelly.

Keith and Katherine Sachs did not merely collect art that is representative of the present age. Many of the works in their exhibit strike to the most primal levels of creativity. I might have been looking at a  blackened ceramic Nagada vase from Egypt, c. 3500 BC, or the 1966 painting by Ellsworth Kelly, Black Red Orange. 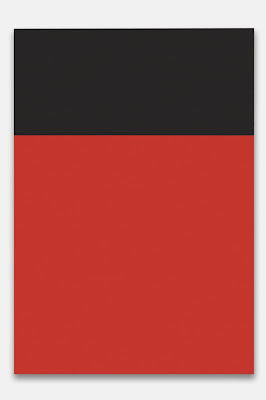 In art, there really is no timeline, no yesterday, today or tomorrow. That is the powerful feeling that "embraced" me as I engaged with the art on display in Embracing the Contemporary.

Of all the paintings in Embracing the Contemporary, Brice Marden's Red Ground Letter exemplifies this ongoing effort to give today's art its voice. It also articulates the resonance of enduring, essential themes of art that speak across centuries and national boundaries.

Marden is famous for his 1984 mid-career shift. From color-drenched minimalism, Marden began experiments in a calligraphic style. 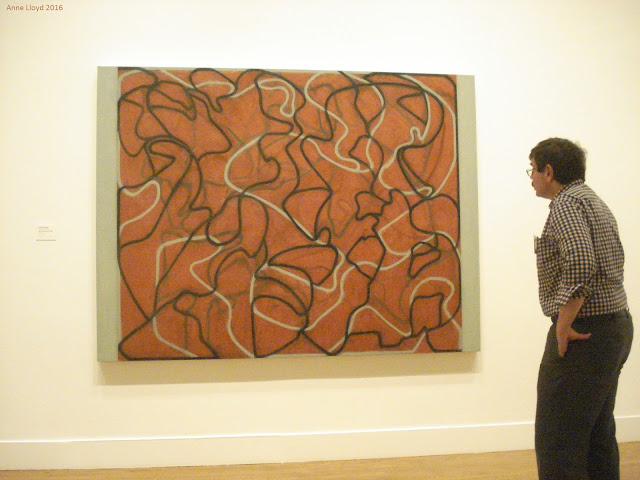 Following  a visit to the “Masters of Japanese Calligraphy, 8th-19th Century” in New York City, Marden unsheathed strands of color and propelled them as cursive lines across the canvas. These powerful pronouncements may well be the visual language of the future. Yet, a sense of meaning - just beyond our grasp - is already apparent in these arching, scrawling lines.

In his wonderful book, American Visions, the late Robert Hughes noted that Marden,"liked his paintings to be the size of a person - so that one would be induced, without quite being aware of it, to experience them as standing figures, other "presences" in the room ..." 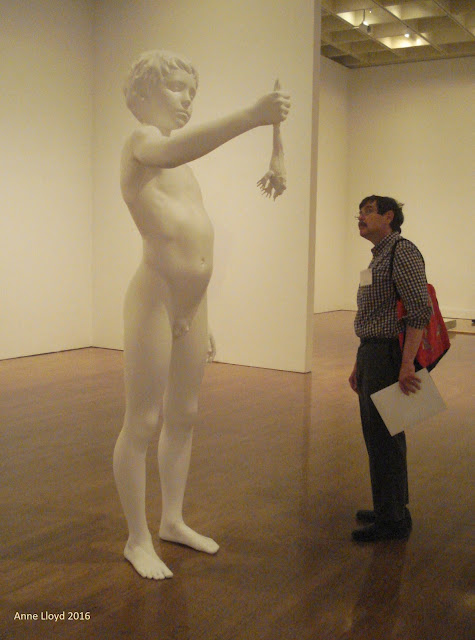 Embracing the Contemporary is filled with "other 'presences' in the room." The most obvious is the huge Boy with Frog, created by Charles Ray. This cast stainless steel and acrylic polyurethane statue measures eight feet in height. It evokes our modern sense of ancient marble sculpture. A monumental scale, which in antiquity would have been reserved for a Roman emperor, is applied to the sense of discovery of an adolescent boy.

Boy with Frog anchors the Embracing the Contemporary exhibit. But in some respects, the insistent "voices" of other works on view are nearly overwhelmed by this towering sculpture.

5 Postcards is an example of a work that could easily be overlooked is the ensemble of paintings. Fortunately, the artist, Jasper Johns, has plenty of name recognition. Johns is also a personal friend of Keith and Katherine Sachs, who collect his work in depth.

So there's not much of a chance that the superb examples of Johns' oeuvre in the Sachs' collection will be undervalued. But 5 Postcards is a work filled subtle insight. A quick glance, however admiring, just won't do it justice. 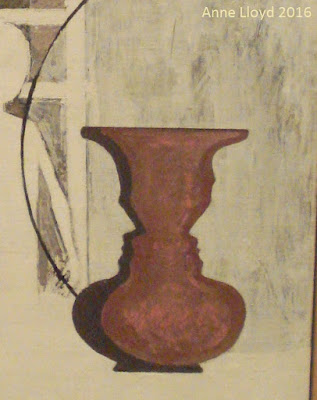 The key to 5 Postcards are the Rubin vases displayed on each.The Rubin vase is a visual device created by Danish psychologist, Edgar Rubin, to test human perception.The outlines of the vases form inverted profiles of unidentified people. But just who are they? Isn't that Pablo Picasso's face on several of the Rubin vases or is it Uncle Harry? Your guess is as good as mine.

Modern art is not about certitude but questioning. Johns became famous - and in some circles notorious - with his variations on the theme of the American flag. The Stars and Stripes was an example of “things the mind already knows” Johns declared. The multiple variations of the flag depictions and the five postcard scenes affirm the importance of searching for meaning.  At the same time, the possibility of finding an answer, THE answer, is cast into doubt.

Keith and Katherine Sachs began collecting art in 1970 and among their first acquisitions were works from the immediate post-1945 era, by Franz Kline and Louise Bourgeois. The art of the Abstract Expressionist evidently held little appeal for the Sachs. Instead, they favored works by Ellsworth Kelly who was one of the painters who reacted against the idea that Abstract Expressionism was the definitive American art form.

Kelly, a World War II veteran, studied art in Europe after the war. Fascinated by Romanesque architecture, he hearkened back to the very roots of art. He reached deep within himself, as well, to create art that had an "object quality"  which needed no elaborate explanations. Harris quoted Kelly's terse commentary in American Visions:

"Instead of making a picture that was an interpretation of a thing seen, or a picture of an invented content, I found an object and " presented" it as itself alone." 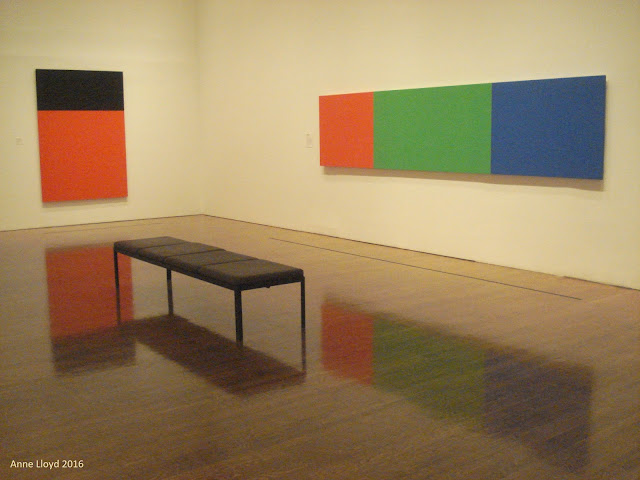 Standing in front of Kelly's Black Red Orange and Red Green Blue enabled me to to connect with the voice of art, directly and without story-line. I was very moved by Kelly's "Matissean ... joy of color" and  conscious of  the "presences" which Kelly's works  summon to the exhibit gallery.

Kelly, Johns and Marden are "gold-standard" artists. So too are other contemporary artists, Gerhard Richter and Howard Hodgkin, whose works are represented in depth in the exhibit. Keith and Kathy Sachs have reached out personally to many of these artists. Their astute selection of quality art is matched by an openness to the ideas and ideals of the artists.

In recent years, Keith and Katherine Sachs have widened the parameters of their collecting to include film and video. A rotating selection of the video portion of the Sachs Collection will  be presented in the exhibit, beginning with Static, Steve McQueen's helicopter-filmed meditation on the Statue of Liberty and the dangers posed to liberty by the national security apparatus of the post-9/11 world.

Diversity is the overarching hallmark of the Sachs collection. This is true, both in the works of art collected and the emotional responses these evoke. There is a real sense, however, of a unifying "presence" in the way that seemingly unrelated pieces of the Sachs collection are integrated. A wall-text of the exhibition provides insight on how Keith and Kathy Sachs envision their collection.

Keith and Kathy Sachs describe their collection as a symphony: “All the different elements work together to create a cohesive whole,” says Keith. In Kathy’s view, the differences among the individual artworks “open up a dialogue.”

Dan Flavin's light sculpture and Joel Shapiro bronze relate so beautifully together in the exhibit that one would have thought that these works were part of a joint commission. And yet they are utterly dissimilar in creative methods. 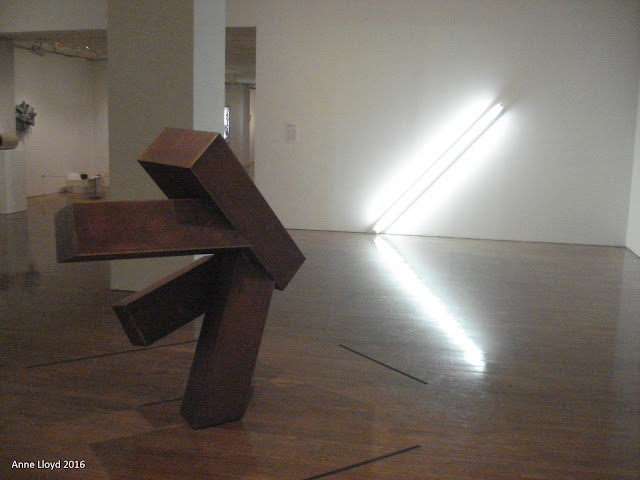 Flavin (1933-96) like Marden had a mid-career change of focus. He abandoned painting to create striking works using  fluorescent light tubes to create works that were both painterly and sculptural in effect. This example of Flavin's work was dedicated to the great art historian, Robert Rosenblum, whom Flavin admired.

Shapiro acknowledged both present and past in his untitled work. His bronze sculpture appears to be a component of an industrial superstructure. However, if you look closely, you will see that Shapiro is depicting beams of timber, the wood "grain" cleverly added as part of the casting process. Shapiro's sculpture evokes organic materials and hand-made human labor. Paired with the flaring light of Flavin's Diagonal, Shapiro's work registers a striking, unforgettable impact.

I could continue to pile-on praise and superlatives upon Embracing the Contemporary. Such accolades certainly would be well deserved.  However, a work small in size and easily passed-by will serve to conclude this review.

As I examined the works in Embracing the Contemporary, I was repeatedly touched on an intuitive level where theme, style, language, etc., did not operate - or need to. This level of appreciation begins in childhood. The astonishing miniature work by Charles LeDray, Toy Chest, speaks directly to this primal moment in human lives. 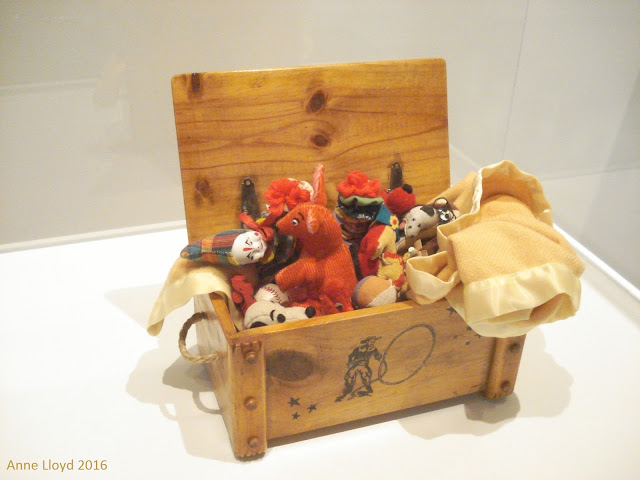 LeDray is a hugely accomplished artist of a "small is beautiful world." Each toy in this tiny box is hand-crafted. A bewildering amount of materials were used - wood, wire, metal, gold‑plated chain, screws, epoxy resin, fabric, synthetic fur, leather, etc. etc. An enormous amount of patience and meticulous skill were devoted to this small wonder.

I had a similar wooden toy box made by my father many years ago. It too was stuffed with play things - not as well cared for as those in LeDray's box. Except for a couple of threadbare survivors, all the toys and my toy box are long gone. It's amazing how many of these vanished treasures I can recall, when I set my mind to it. 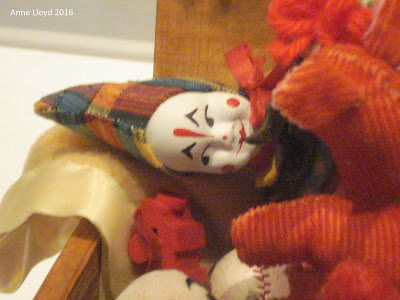 Looking at LeDray's wondrous work of art, I was stuck by the thought that we begin to collect memories as children and continue to do so throughout our lives. This in turn leads to a point when we are moved to share our emotional riches with others.

At this moment, the "art instinct" takes tangible form.This is the genesis of the creative urge that finds all manner and ways of expression.

I suspect that the Keith and Katherine Sachs first approached art collecting from this level of caring and sharing - and still do.

Images courtesy of the Philadelphia Museum of Art and Anne Lloyd

Anne Lloyd, Photo of Keith and Katherine Sachs at the Embracing the Contemporary Exhibit, Philadelphia Museum of Art. Digital Photo, 2016

Posted by Art Eyewitness at 9:13 PM