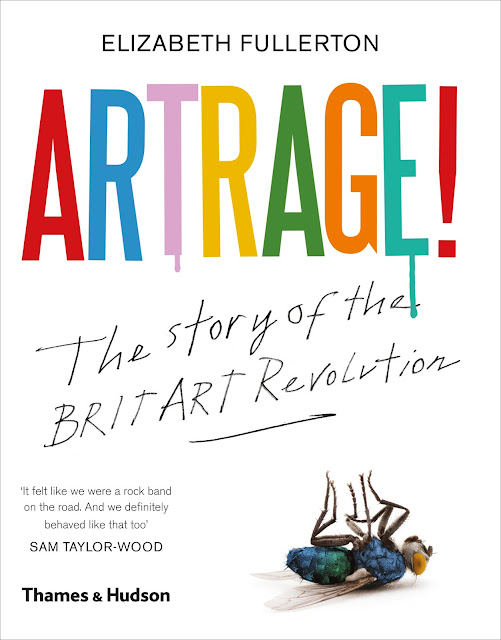 Artrage: the Story of the BritArt Revolution

The moment that all artists should fear has arrived for The Young British Artists. The YBAs have become an institution.

These "BritArt" iconoclasts of the 1990s are the subject of a superb chronicle of their lives and art. The aptly-named book, Artrage, recently published by Thames and Hudson, comes just as the work of one of their founding members, Damien Hirst, has entered the collection of the National Gallery of Art in Washington D.C.

Can the dreaded word, retrospective, be far off?

Artrage: the Story of the Britart Revolution was written by Elizabeth Fullerton. An accomplished journalist, Fullerton worked as a foreign correspondent for Reuters. She has an MA in art history and has covered the cultural scene for a number of top tier publications. Fullerton writes about contemporary art in an engaging, exciting and insightful way. The Young British Artists could not have asked for a better biographer.

For her part, Fullerton could not have dreamed-up a more colorful group of protagonists. Collectively and individually, the YBAs personified ambition and anxiety, brash outward behavior and repressed fault lines of insecurity.

The YBAs - Damien Hirst, Rachel Whiteread, Mat Collishaw, Tracy Emin, Sarah Lucas, Angus Fairhurst, Angela Bullock, Gillian Wearing and  others - first made headlines in 1988. The Thatcher Revolution was in its terminal phase. Having destroyed the labor movement in Britain and undermined the Welfare State, "Thatcherism" created a polarized environment ripe for revolution.

A number of the YBAs came from working class families who had suffered under the Iron Lady's rule. But their "revenge" came by embracing many of the principles of the Thatcherite creed. With van Gogh paintings being auctioned at Christies for mind-boggling sums, the YBAs decided to manipulate the system in their favor rather than overturn it.

Several of the YBAs, notably the sculptor Rachel Whiteread, have created social statements of enduring merit. But making "relevant art" generally took a back seat to just making the kind of art that Sarah Lucas described as "what's sort of poking me in the eye."

Five years before the YBAs scored their 1988 breakthrough, Cyndi Lauper released the song that would become the anthem of the 1980's and 1990's, Girls Just Want to Have Fun. One of the lines from the song directly pertains to the YBAs. They refused to follow in van Gogh's suicidal footsteps or meekly accept what the elitist art establishment cared to offer:

I want to be the one to walk in the sun

The YBAs were mostly graduates of Goldsmiths College of Art in South London. The faculty at Goldsmiths encouraged personal initiative, equipping "students with a set of valuable practical tools with which to face a hostile art world."

Fullerton provides just enough background detail to set the tone for her narrative. But she quickly - and sensibly - launches into the story of the 1988 "Freeze" exhibit, organized by Damien Hirst. Although still a student at Goldsmiths, Hirst demonstrated the finesse and daring of seasoned impresario. He gained access to a vacant London Docklands building as a site for a group exhibition and secured enough funding to mount the show.

Hirst gave everyone their marching orders in a typed memo with the bold-face declaration "IT IS GONNA BE GOOD." 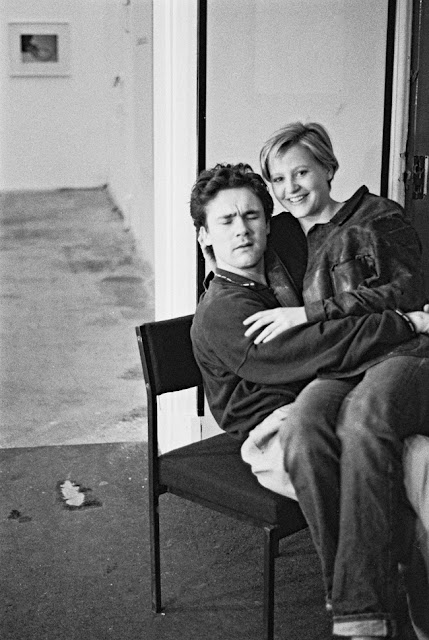 Despite an intolerable work load, cruel dismissals of the work of a couple of the participants (for not "fitting in") and a drinking binge at the exhibit opening, "Freeze" was a success. The exhibit generated a momentum and elan that would last for over a decade.

Sales and media reviews were a different matter. A deal for Mat Collishaw's brilliant, disturbing Bullet Hole fell through. The solitary major review of the exhibit - in The Guardian - castigated the group for their lack of "self-doubt." 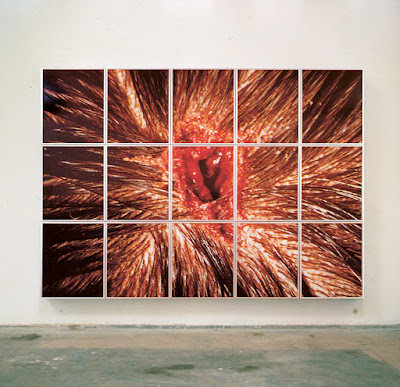 Self-doubt? The YBAs might have sampled a bit too much from the drinks table at the "Freeze" premier but they ignored such absurd media commentary.

"Freeze" introduced the work of the YBA's to art dealers and collectors. Artrage focuses on  these gallery owners and patrons almost as much as upon the artists. Visionaries like the German-born dealer, Karsten Schubert, worked to raise the public profile of the YBA's while struggling to keep from drowning in red ink. Others, notably the aristocratic Jay Jopling, joined in for the fun and profit of it all. 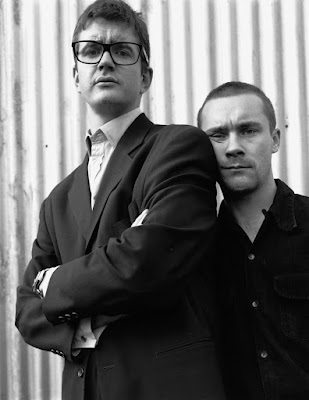 Saatchi also used his British establishment connections to win approval for an exhibit of YBA art at the sanctum sanctorum of the Royal Academy in 1997. It is a key episode in Fullerton's narrative which she recounts with a judicious balance of drama and analysis.

The planning committee for "Sensation" at the Royal Academy included Damien Hirst and Norman Rosenthal, the exhibition administrator of the Royal Academy. This insured that noteworthy art by the YBA "core group" like Fiona Rae's Untitled (Parliament) would be included.

But it was a work by an artist on the periphery of the YBAs that detonated the major explosion at "Sensation." Marcus Harvey's billboard-size portrait of the child-murderer, Myra Hindley, triggered howls of protest.

"Sensation" was mounted only a few weeks after Princess Diana's death. Presenting a "heroic" portrait (at least in its physical dimensions) of a child-murderer so soon after the passing of a noted humanitarian like Princess Diana was bound to give offense and to detract from mature assessment of works like Rae's Untitled (Parliament). 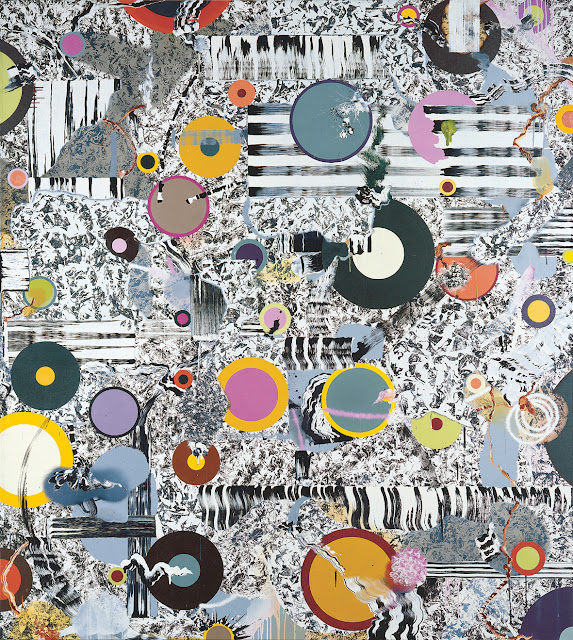 Was the inclusion of Myra a misstep or a case of "there's no such thing as bad publicity?" Saatchi after all manages a very successful advertising agency. Dark thoughts about his manipulation of the art scene are not easy to dismiss.

Only a short time after the closing of "Sensation," Saatchi castigated the YBAs for having embraced the cult of celebrity. Yet it was  Saatchi who had insisted that the "Sensation" artists be featured with full page portraits in the exhibit catalog against Rosenthal's dissent.

Whether or not Saatchi was a malign Svengali-figure or just a very astute player in the lucrative art market, he did provide needed financial support early-on and pointed the YBAs in the direction of career success.

Yet, in terms of validation, the mere fact that many of the YBAs never succumbed to "starving artist syndrome" has worked against them. Jealousy and resentment of their success began to surface around the time of the "Sensations" exhibit.

Gillian Wearing  unwittingly served as a lightning-rod for such criticism. Wearing had questioned contemporary society with a series of portrait photographs. She took pictures of people on the streets of London holding placards with a word or phrase that described their emotions. In a wise choice, a  London "Bobbie" chose the word, "Help."

Like much of YBA art, Wearing's photo expressed a theme, however brilliant, that allowed for little variation. With devilish (and terribly unfair) sarcasm, critics sharpened the barbs on their tongues. Her photo series was lambasted as "Gillian Wearing-Thin."

By extension, such criticism was aimed at the whole YBA group. In 2004, a devastating fire at a London warehouse used by many of the YBAs destroyed a huge trove of art. An editorial in The Daily Mirror exulted at the incineration of the "over-priced, over-discussed trash that we have had rammed down our throats in recent years by these ageing enfants terribles..."

Fullerton emphasizes dramatic incident over extended commentary. But when she pauses to provide insight, her words command respect. Collectively, the YBAs are a generational group rather than a stylistic one. Fullerton notes:

The vexed issue of what connected the BritArtists has never been resolved for want of a simple answer. While common threads exist in their art, such as black humor, focus on the self or emphasis on death and decay, there was no overriding style. The artists certainly didn't consider themselves as a movement and had no manifesto or shared philosophy; yet they were undeniably a phenomenon.

Fullerton manages the difficult task of presenting these disparate artists as individuals while coming to terms with the "phenomenon" of BritArt during the 1990's. If the YBAs were "self-absorbed" or included elements of gratuitous violence, these can be interpreted as comments on the era as well-as pandering after quick sales or headline-grabbing.

Too much media attention has been given to the "bad-boy" or "bad-girl" images of the YBAs. Fullerton's book certainly opened my eyes - and my mind - to the work of artists I scarcely understood because of all the hype surrounding them.

The work by Angela Bullock is a case in point. From her early "drawing machines" using infrared detectors to Firamental Night Sky: Oculus.12, 2008, Bullock has brilliantly utilized cutting-edge technology. Firmamental Night Sky used LED (light-emitting diodes) technology to create a "starry" sky in the oculus of the Guggenheim Museum's rotunda during a 2008 exhibition. This was a profound statement on humanity's place in the cosmos and a comparison with van Gogh is entirely deserved.

I missed this 2008 exhibit at the Guggenheim. At that point, I simply could not appreciate innovative contemporary artists like Angela Bullock. The kind of media chatter that has - until now - defined the YBAs has been an obstacle for me. It has made it difficult to appreciate them as creative individuals.

Thanks to Elizabeth Fullerton's outstanding saga of The Young British Artists, I won't make that mistake again.

Posted by Art Eyewitness at 7:39 PM