Art and Photography from the Pre-Raphaelites to the Modern Age

Pictures, rather than religion, were the true opiates of the "masses" during the nineteenth century.

Images proliferated at an awesome rate during the 1800's. So too did opportunities to see and enjoy them. From the new public art museums to chromolithograph prints on the bedroom wall, from engravings in the morning newspaper to the family photographs on the mantle - there was so much to see. So little time to riot and revolt as had occurred in 1789.

Yet, a provocative exhibition currently at the Tate Britain in London makes a strong case that an upheaval did take place during the Victorian era - a cultural one. New ways of visual representation and a new image-making technology - photography - led this revolution.

Painting with Light, Art and Photography from the Pre-Raphaelites to the Modern Age is a vast exhibit with nearly two hundred works of art on view. 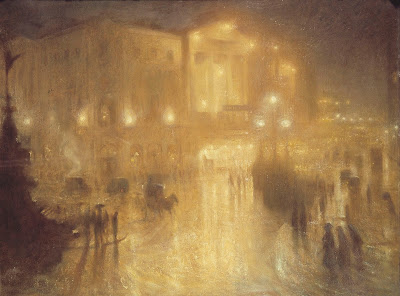 Often seen as being in conflict during the 1800's, painting and photography were paired in a collaborative synergy. Painting with Light methodically - and often brilliantly - shows how these rival art forms joined forces during the Victorian and Edwardian eras in Great Britain.

It is best to see this relationship as a "dialog." Photography and painting  certainly influenced each other but it is not always clear which was leading the way. Two signature works in Painting with Light illustrate this problematic partnership. 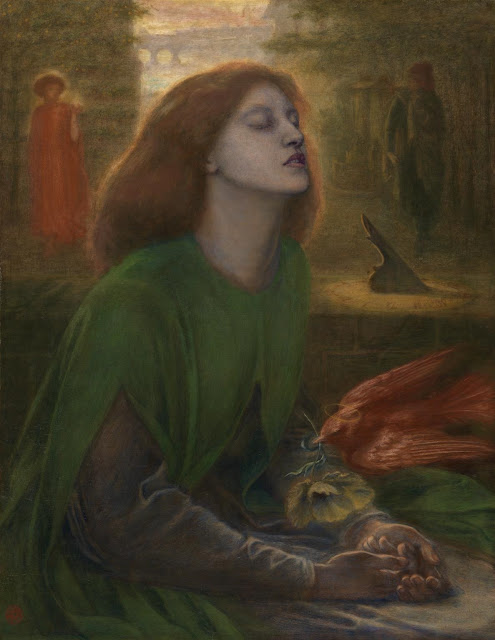 Dante Gabriel Rossetti began work on Beata Beatrix in 1864. The painting honored the memory of Elizabeth "Lizzie" Siddal, Rossetti's wife, muse and gifted artist in her own right. "Lizzie" Siddal had died in 1862. Rossetti, whose emotions were notoriously brittle, struggled with this work and was unable to complete it until 1870.

During the interim, Rossetti's interest in photography waxed and waned. So too did his friendship with the great photographer, Julia Margaret Cameron.

Rossetti had met Cameron in 1857. During the early years of the 1860's, Rossetti lauded Cameron's photos. By the end of the decade, however, his views had changed. In 1869, Rossetti wrote Cameron an accusatory letter stating that "photography is not always a trustworthy reporter even in your hands as regards facts."

In 1867, while still on good terms with Rossetti, Cameron created a stunning photograph, Call, I Follow, I Follow, Let Me Die.The ostensible theme, like Beata Beatrix, was Medieval culture. Cameron adopted a line from Tennyson's Idylls of the King as her title and posed her maid, Mary Hillier, as Sir Lancelot's lover, Elaine. 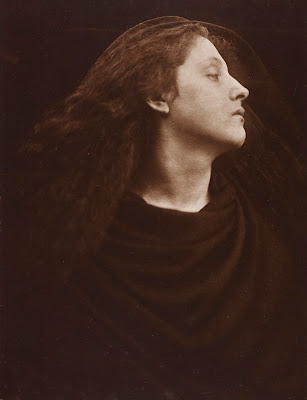 There are few traces of Camelot in this revolutionary photo. Tightly cropped and brilliantly composed, it presented Hillier in dramatic profile. Narrative details are nowhere in evidence, unlike Beata Beatrix. The pose aside, the two works are quite dissimilar. Cameron's photo gestures toward the future, while Rossetti's painting is rooted in the past.

Was Rossetti annoyed that Cameron had borrowed the pose of Beata Beatrix to create such a strikingly modern work? Did the effect of seeing Call, I Follow, I Follow, Let Me Die rouse Rossetti to finish Beata Beatrix, thus reclaiming the image that he had struggled so long to complete?

We are unlikely to know the answers to these questions with any degree of certainty. We do know that Rossetti never left his allegorical inner world to embrace modernism.

In 1865, Rossetti commissioned a series of photos of Jane Morris, who had replaced Lizzie Siddal as his muse. Rossetti chose John Robert Parsons, a competent photographer but lacking the inspired vision of Cameron. Parson's photos provided Rossetti with striking views of Jane Morris which informed his unforgettable - but also unchanging - images of "Janey" in such paintings as Proserpine, painted in 1874. 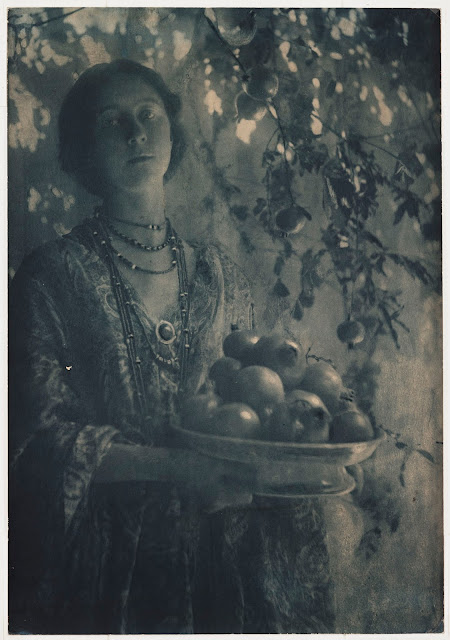 Zaida Ben-Yusuf"s 1899 photo, The Odor of Pomegranates, and Decorative Study No.1, Pomegranates, by Minna Keene, created around 1906, are rooted in the Pre-Raphaelite taste for rich detail. These works evoke the pictorial story-telling tradition which Rossetti's Proserpine exemplified.

The 1874 date of Proserpine, however, reminds us that the First Impressionist Salon occurred that same year. The 1906 date of Mina Keene's Decorative Study No.1 is even more disconcerting. Picasso's Les Demoiselles d’Avignon was painted the following year.

It is hard to escape the feeling that eminent Victorians like Rossetti had tasted a few pomegranates too many.

Photography was invented in 1839 by Louis Jacques Daguerre (if you are French) or by William Fox Talbot (if you are English). It is clear from Painting with Light that British technical ingenuity never slackened from Fox Talbot's calotype process to the first experiments with color photos, based on theories by the scientist, James Clerk Maxwell, in 1861.

This spirit of British innovation did not transfer to artistic inspiration. During much of the 1800's, Great Britain was the world's wealthiest and most powerful nation. But the price of pioneering the Industrial Revolution was staggering. British painters and photographers generally looked away from social issues, ignoring the child prostitutes, the open sewers and the cholera victims who died by the tens of thousands. 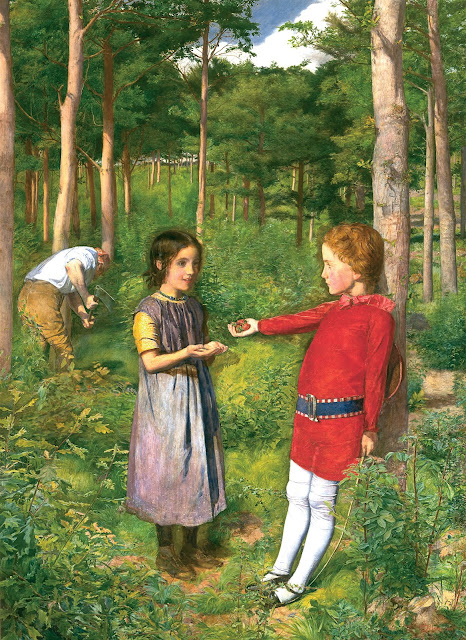 Many photographers likewise averted their eyes from urban and industrial realities. Peter Henry Emerson (1856-1933), to his credit, used advanced photographic techniques to record the lives of rural folk living in the marshes of eastern England.These brilliant images, which record quietly heroic lives little changed from the Middle Ages, were collected and published in a major book, Life and Landscape on the Norfolk Broads.

Ten years before Claude Monet created his lily pond at Giverny, Emerson and his painter colleague, Thomas Frederick Goodall (1856-1944) documented country people gathering water lilies for use in fish traps. Emerson initially believed that photography was a great art form and urged photographers to "first see the picture in nature and be struck by its beauty....” 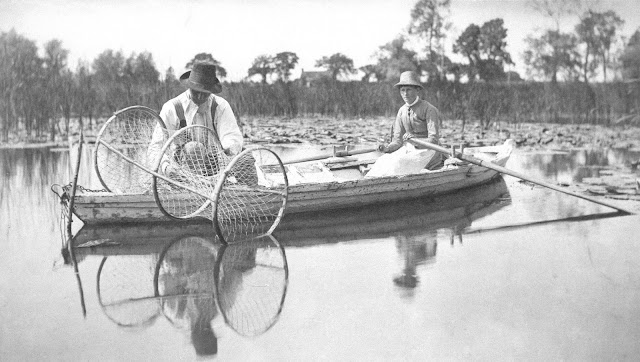 In a stunning "about face" in 1890, Emerson declared "Photography not Art." Emerson's reversal, like Rossetti's harsh criticism of Julia Margaret Cameron, shows how difficult was the process of moving a very traditional society like Great Britain into the modern world. 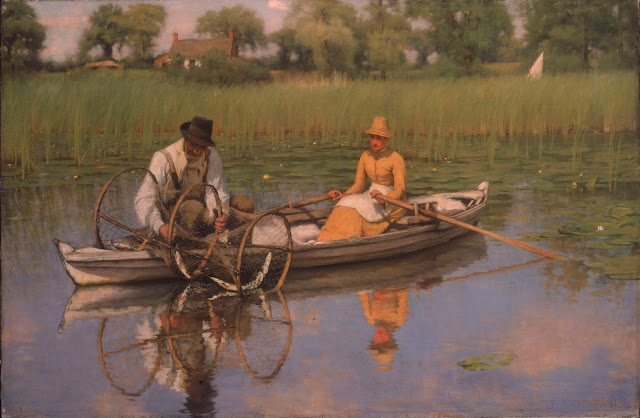 The British during the last decades of the nineteenth century faced the future with an apprehension of radical change. Responding to the Industrial Revolution, the British opted for unifying art forms based on the narrative traditions of English literature and reverence for the natural world.

Staying with friends at an artist's colony in the Cotswolds, Sargent almost literally "painted with light." He took the en plein air technique of the Impressionists to an unimaginable level of dedication. He painted for less than fifteen minutes each evening to capture the exact light conditions at dusk, when Japanese lanterns would be lit. 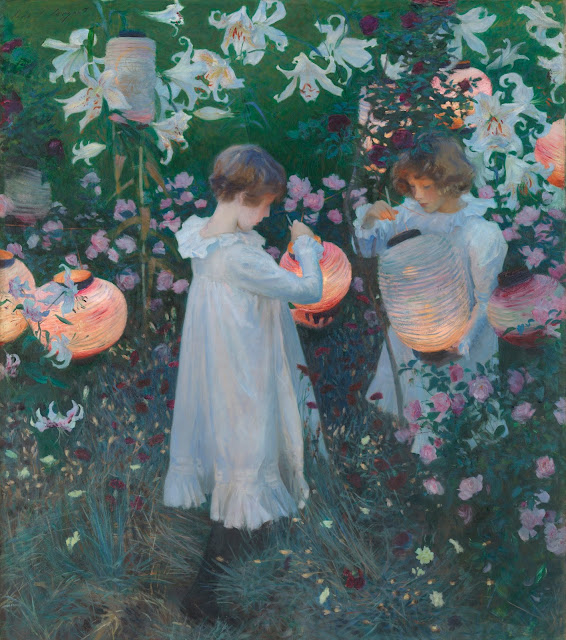 Sargent worked in this fashion for two summers in order to complete Carnation, Lily, Lily, Rose. In essence, Sargent focused with his brush and palette in a way that photographers manipulate their camera lens.

In 1909, the pioneer of color photography in Britain, John Cimon Warburg (1867–1931) paid a tribute to Sargent's masterful painting. Warburg's autochrome portrait of his daughter, Peggy in the Garden, is so evocative of Carnation, Lily, Lily, Rose that one would be pardoned for mistaking it as a work by Sargent himself.

In a world beset by bewildering change, British art during the late nineteenth century focused on themes readily appreciated by people across a broad social spectrum. As a result, British art failed to score the breakthrough triumphs that are now associated with Monet, Cezanne and Matisse. France, not Britain, was the high road to Modern Art.

Yet, Painting with Light at Tate Britain shows that quiet revolutions can succeed in making an enduring, effectual mark. In the house of art, as in heaven, there are many mansions.