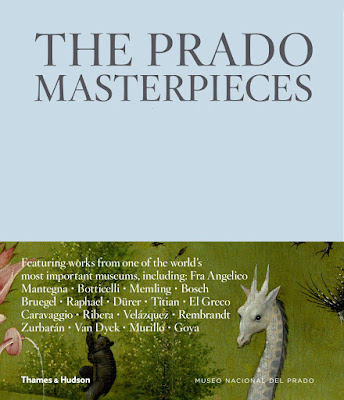 By the Museo Nacional del Prado

It would be easy to speak entirely in superlatives to describe Thames & Hudson's new book, The Prado Masterpieces.  Magnificent, authoritative, insightful, "all of the above."

The Prado Masterpieces certainly deserves such praise. The value of this huge volume, however, is the way that it truly complements a visit to the Prado. A close study of the Prado masterpieces, either on a pilgrimage to this vast museum or via the pages of this wonderful book, reveals the compelling, often ironic features of Spain's culture.

The  Museo del Prado opened its doors "for the study of professors and the recreation of the public" in 1819. The museum was constructed on a meadow (prado in Spanish) in Madrid to display the royal art collections of Spain.

Founding the Prado represents the solitary enlightened act of one of the most narrow-minded autocrats in European history, King Ferdinand VII (1784-1833). The Prado was an assertion of Spanish nationalism and cultural achievement at the same time that Ferdinand VII shredded the liberal laws and social reforms formulated after the devastation of the Napoleonic War.

The royal art works which Ferdinand placed on view in the new museum revealed a further irony. Over the centuries, the Spanish monarchy had lavished huge sums on art that often had little to do with Spain.

Beginning with the "Planet Kings" of the 1500's-1600's, a collection rich in Flemish and Italian paintings was purchased to grace the walls of Spanish palaces. Not until quite late in Spain's era of world domination did Spanish artists receive the patronage they deserved. An otherwise inept king, Philip IV, appointed the great Diego Velázquez (1599-1660) to a position of prestige in his court.

The truth about many of the Prado's paintings is that these art works were status symbols of Spain's global empire. To be fair to the Spanish, they paid for their art rather than stealing en masse as Napoleon later did. But the payment for these Renaissance masterpieces came from the "King's Fifth." This was the share owed to the Spanish monarchy from the vast wealth coming from the Indies. Untold thousands of native peoples died, particularly in the silver mines of Potosi in Peru, to pay for stunning works of art like Titian's Venus and Adonis. 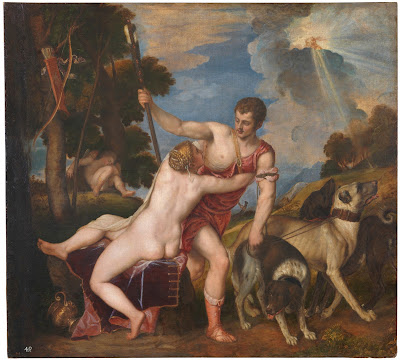 Like his predecessors, Philip II had a preference for Flemish and Italian painting, especially Venetian. He acquired very few works by Spaniards, and the number of Spanish artists who worked for him was small, for the honour was achieved only by those whose versatility allowed them to adapt to his demands.

The Spanish monarchs and their advisers were certainly knowledgeable  collectors. Along with numerous paintings by Titian, works by Botticelli, Raphael, Durer, Tintoretto and van Dyck are now displayed at the Prado. I was particularly impressed by Christ among the Doctors in the Temple, painted by Paolo Veronese (1528-1588) around 1560. This Venetian master is sometimes forgotten, coming as he did between the High Renaissance and the heyday of Caravaggio. 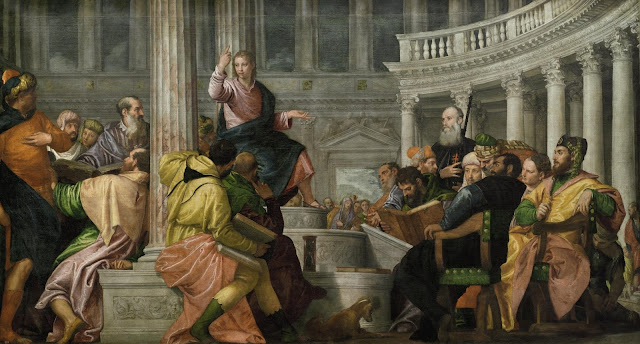 Paolo Veronese, Christ among the Doctors in the Temple, c.1560

This magnificent work exemplifies the outstanding talent of Veronese. Not only did Veronese place his protagonists in a totally convincing setting, but he displayed acute psychological insight. The conflicted emotions of the Temple scholars are revealed by the skillful way Veronese depicted their facial expressions and bodily postures.

There was another reason why the Spanish monarchs favored art by the great masters from Flanders like Rogier van der Weyden. The Hapsburg dynasty which ruled Spain during its "Golden Age" traced their roots to the medieval House of Burgundy, the feudal lords of Flanders. 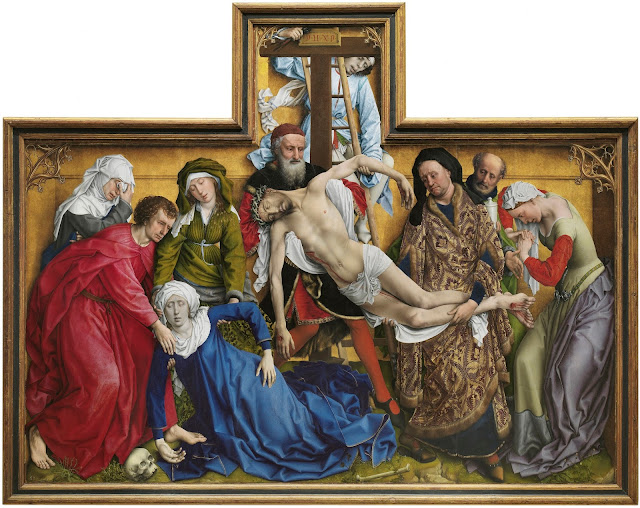 Rogier van der Weyden, The Descent from the Cross, before 1443

Van der Weyden's Descent from the Cross combined all the elements of Flemish culture, emotional piety and courtly tenderness, vivid depictions of the blood-oozing wounds of Christ and tactile realism of the rich, flowing robes of his mother and disciples.

During the period when Spanish political power was at its zenith, between 1519-1648, there was no shortage of talented Spanish painters. Francisco de Zurbarán (1598-1664) and Jusepe de Ribera (1591-1652) were a match for any in Europe. Spanish artists, however, failed to attain the social status of their counterparts in Italy. Moreover, they had to pay a staggering ten-percent retail tax, the alcabala, on any work that was not religious in theme.

Spanish artists, needless to say, painted and sculpted religious works of art on a prodigious scale. Many are deeply moving like Velázquez' 1620 portrait of Jerónima de la Fuente,  a missionary nun posted to the distant Philippines. In order to evade the alcabala, Spanish artists frequently added a theological gloss to a still life or genre scene.

I am not sure what interpretation El Greco intended with his Fable, painted around 1580.

Born Domenikos Theotokopoulos on the Venetian-controlled island of Crete, El Greco studied in Italy where he created several early masterpieces. But he did not find preferment at the court of Philip II (reigned 1556-1598) when he emigrated to Spain. Thematic elements in some of his religious works raised questions about his orthodoxy.

El Greco then set up his studio in Toledo, painting magnificent portraits of Spanish hidalgos, one of which,The Nobleman with his Hand on his Chest, is among the most beloved paintings on view at the Prado. 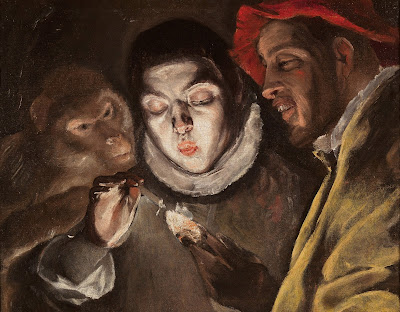 Fable, however, confounds all attempts at explanation.

Was El Greco depicting the wonder of human creativity or of worldly vanity? Is this a surreal work of imagination like Francisco Goya's later etchings, Los Disparates (The Follies). Might El Greco have been making a sly commentary of the attempts of Phillip II to "ape" the light of Venice while ignoring the talents of Spanish artists? We will never know.

We do know that the collection of the Prado would have been richer still but for a disastrous fire on Christmas Eve, 1734, at a dilapidated palace known as the Alcázar. The fire alarm was mistaken for bells announcing midnight Mass. By the time the danger was realized, most of the 500 paintings in the Alcázar collection, including works by Leonardo da Vinci, were consumed by the flames.

By heroic effort, a few precious paintings, slashed from their frames and hurled from the palace windows, were saved. One of the survivors is now recognized as the supreme masterpiece of Spanish art, Las Meninas, by Diego Velázquez in 1656.

Las Meninas was painted during the twilight of Spain's global power. Ironically, the setting for this stunning work was the Alcázar where so many masterpieces were to be lost. Here Velázquez evoked the rarefied world of the Spanish court as the shadows of history gathered over it. Spain's economy was bankrupt and its population reduced by war, plague, starvation. France under the Sun King, the young Louis XIV, was now the greatest power in Europe.

But with the bloom of childhood on the face of Infanta Maragarita, Velázquez testified to the promise and resilience of the human spirit. Empires come and go, but the look of wonder and love in the eyes of the young princess is born and reborn everyday.

By an act of great fortune, I was able to visit the Prado back in 1979. I was only a couple of years out of college and knew very little about art. I can't even remember seeing Las Meninas, but I do recall Goya's The Third of May 1808 in Madrid.

Thanks to The Prado Masterpieces, I have been able to relive my long-ago visit.This magnificent book, the closest encounter to an actual tour of the galleries of the Prado short of going there, has rekindled my desire to return.

I want to go back to the Museo del Prado. What higher praise for a book about this wondrous place can there be?

All images courtesy of Thames & Hudson and the Museo Nacional del Prado. The image of Christ among the Doctors in the Temple by Paolo Veronese, is from the Prado website: