Jerusalem 1000–1400: Every People Under Heaven at the Metropolitan Museum of Art, New York 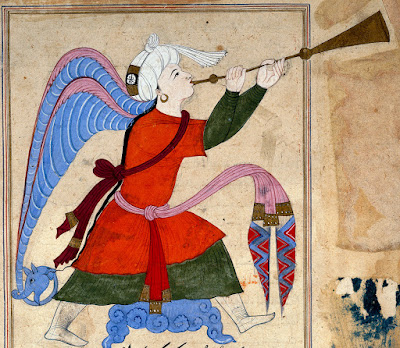 According to the cosmic view of Medieval Europe, the world was divided into two realms: the Earthly City and the City of God.

This mental universe came straight from St. Augustine in 426 AD. Following the shocking fall of Rome, Augustine pondered the fate of humanity, of those doomed by their moral failings and a fortunate elect redeemed from sin. Augustine's view shaped the philosophy of the West to an unprecidented degree.

There was, however, another city: Jerusalem. Exposed to the universal lust for gold and power, Jerusalem also possessed a palpable sanctity.

“Jerusalem is the most sublime of cities," wrote Al-Muqaddasi (ca. 946–991), a Jerusalem-born geographer. "It unites in itself the advantages of this world and the next." 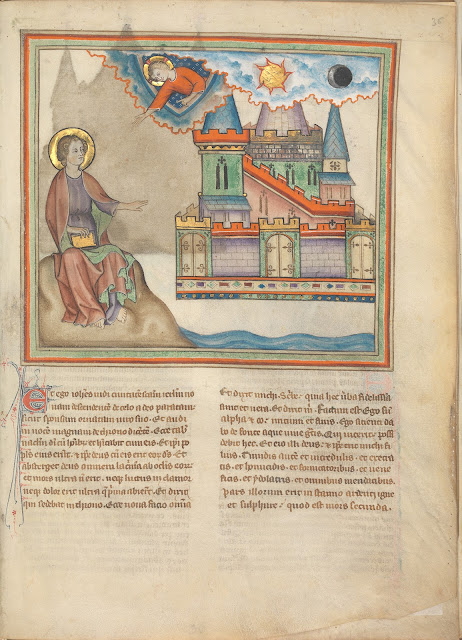 This city of God - and men - is brought vividly to life in Jerusalem 1000–1400: Every People Under Heaven, a spectacular exhibit at the Metropolitan Museum of Art in New York. Faith and Photography: Auguste Salzmann in the Holy Land, a display of photos of Jerusalem in 1854, little changed since the Middle Ages, is also on view at the Met.

Jerusalem 1000–1400 focuses on this fabled city during a half-millennium of pilgrimage and plunder, conquest and co-existence. The new exhibition portrays history as a sharing of cultural achievements among peoples of many lands and faiths.

An illustration from a book of Gospel readings dating to 1218 AD testifies to this theme. The text was written in the Syriac language of Christians living in what is today modern-day Iraq. But this picture brilliantly evokes the multiplicity of races in Jerusalem and a universal vision of harmony. 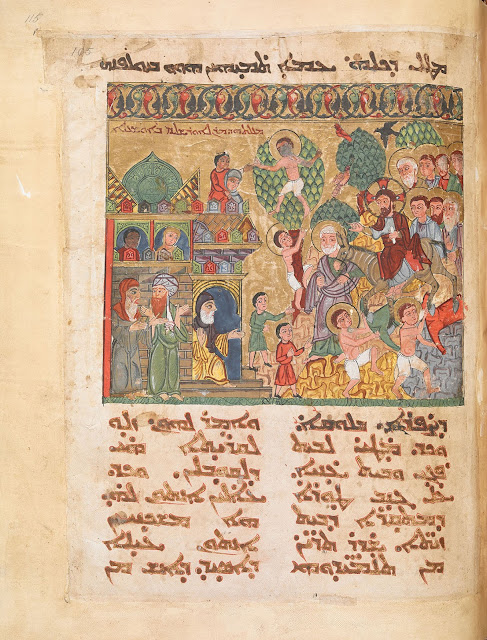 The Entry into Jerusalem (detail) from a Syriac Lectionary, 1216–20

As Jesus rides into Jerusalem at the beginning of the fateful week leading to his crucifixion, an African man and a fair-skinned European gaze on the scene from upstairs windows. Turbaned men, one with a flowing red beard, ponder Jesus' entry into the city. A woman with Arab features has hoisted her young son to behold a moment of history that neither could possibly comprehend.

Truly, "every people under Heaven" have been gathered into this extraordinary image - just as they were in the marketplaces of Jerusalem when this picture was painted.

Six thematic sections document the cooperative connections among Christians, Jews and Muslims in Jerusalem during the Middle Ages. These themes include the role of trade in Jerusalem, the quest for holiness among the congregations of the three "Abrahamic" religions and the vital role of patrons for the creation of art works that still command reverence today.

All was not social harmony and shared spirituality, however. While the art works selected for Jerusalem 1000–1400 emphasize the "positives" of this fascinating time and place, battles raged and blood flowed. This was, lest we forget, the era of Holy War - Christian Crusade vs. Islamic Jihad.

The curators of Jerusalem 1000–1400 wisely refrain from venturing into the tangled origins of the Crusades or in formulating an appraisal of the legacy of these controversial wars. Several of the exhibit objects relating to the Crusades, however, speak volumes.

A number of weapons from the period are on display including a massive, two-handed broad sword.  Armaments of this type were used by Christian Crusaders like the Knights Templars.

Crusader Sword donated to Mamluk Armory in Egypt in 1419


Close examination of this sword leads to a curious discovery. An Arabic inscription has been engraved on the blade, noting that it was war trophy donated to the Mamluk armory in Alexandria, Egypt in 1419. Whoever carried this fearsome weapon into battle evidently did not survive the carnage.

One Crusader who did make it home was Jean d'Aluye who journeyed to the Holy Land in 1241. Upon his return to France, d'Aluye founded the abbey of La Clarté-Dieu near Tours. 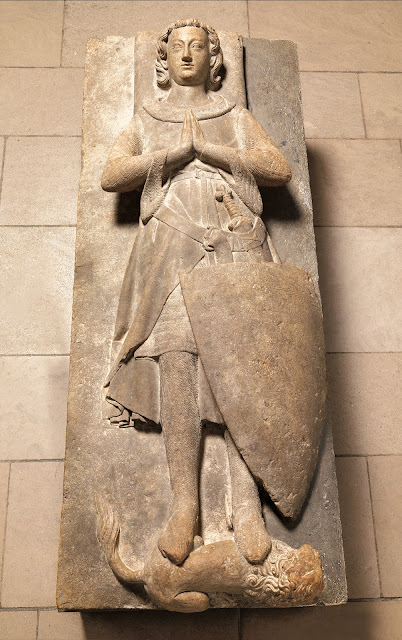 The tomb effigy or gisant of Jean d'Aluye presents an almost text-book illustration of Crusader equipment - except for one significant detail. The chain mail shirt or hauberk worn by d'Aluye, the cloth surcoat covering his armor (which kept him from being grilled by the desert sun) and his kite-shaped shield were standard issue of the knights fighting in the Holy Land.

D'Aluye's sword, as depicted on his effigy, is a different matter. Incredibly, he has a Chinese sword sheathed in his scabbard. The flower-shaped pommel and inverted hand guard are features of swords made in China - but not Europe - during the thirteenth century. D'Aluye most likely purchased his sword while he was in the Holy Land. There was a thriving traffic of many commodities via the Silk Road, including the celebrated Chinese stoneware ceramics glazed in gray-green celadon.

The objects that most appealed to European pilgrims to Jerusalem were those related to religion, especially to display relics believed to be associated with the life of Jesus.

Elaborate cases designed to hold these precious fragments are a major feature of the exhibit. Gilded and gem-encrusted, these reliquaries seem at variance with modern conceptions of piety. Medieval Europeans thought differently about extravagant display while maintaining standards of devotion that were sincere, if sometimes naive.

The Reliquary Cross of Jacques de Vitry exemplifies these glittering cases for religious relics. De Vitry is a fascinating figure, a "prince of the Church" yet devoted to ascetic religious convictions soon to be preached by St. Francis of Assisi. It was de Vitry, bishop of the Christian port-city of Acre, who described Jerusalem as being “honored by angels and frequented by every people under heaven.”

For Christians of de Vitry's era, the gold and jewels used to create reliquaries had a symbolic role, testifying to the incorruptibility of souls blessed by God's grace. De Vitry treasured a relic of his friend, the mystic Marie of Oignies who died in 1213. A finger of the deceased woman, famous for her visions and her care of lepers, was placed in a small case or phylactery which de Vitry wore around his neck on special occasions.

The Reliquary Cross of Jacques de Vitry, after 1216

Interestingly, the enamel portraits of saints on this reliquary point to divisions and misunderstandings within the diverse Christian communities.

The enamels were made by Byzantine artists, most likely in Constantinople during the 1100's. These exquisite images were associated with specific saints but the placement on the cross is "out-of-sync" with their identity. The exhibition commentary perceptively notes that "the enamels of saints are not logically arranged, suggesting that the goldsmith could not read the Greek inscriptions identifying them."

This mutual incomprehension between Greek-speaking Christians and the pilgrims from Western Europe climaxed with tragic consequences. In 1204, a force of Crusaders from France and Belgium became embroiled in a dispute between Venice and the Byzantine Empire. The Crusaders went on a rampage, pillaging Constantinople. The loss of life and destruction of manuscripts and art works was only matched by the Mongol devastation of Baghdad in 1258.

Jerusalem somehow was spared the fate of Constantinople and Baghdad - yet did not escape unscathed.

The first Crusaders to reach Jerusalem in 1099 massacred thousands of Muslims and Jews when they captured the city. The burning of the Jerusalem synagogue in 1099 recalled the Roman destruction of Herod's Temple in 70 AD. For Jews, the loss of the Temple and the dream of its re-establishment dominated their thoughts and prayers for centuries.

Jerusalem 1000-1400 displays many precious works evoking Judaism during the Middle Ages. An intricate wedding ring made in Germany during the early 1300's depicts the Temple. Such rings would have been used in the Jewish marriage ceremony "in which remembrance of the Temple played a vital role" rather than worn in daily life.

Even more profound is the page from the Barcelona Haggadah in the collection of the British Library. A small hare, symbol of the hunted and persecuted, rests peacefully, protected by the encircling vines at the bottom of the image.  Above, the text proclaims the immortal words of the Passover prayer: "Next year in Jerusalem." 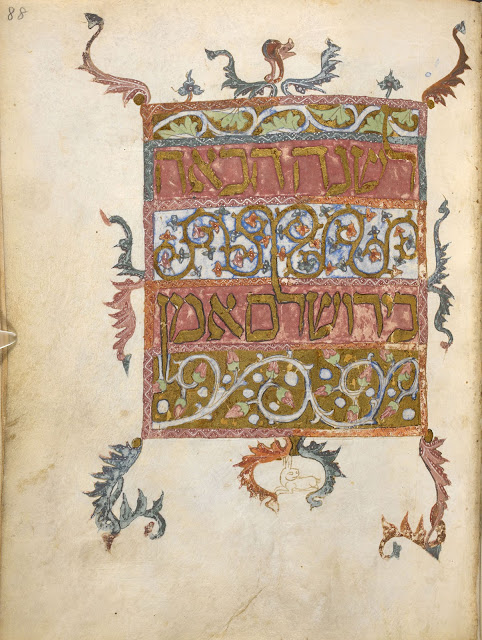 Next Year in Jerusalem from the Barcelona Haggadah,1360–70

One of my favorite objects in the exhibition is too big to be represented here. It is a vast scroll, a Hajj certificate attesting to the pilgrimage of a Muslim gentleman with a very imposing name, Sayyid Yusuf bin Sayyid Shihab al-Din Mawara al-Nahri. Measuring seven meters long, the scroll plots the pilgrim's journey to Mecca, Medina, Karbala, Hebron, and Jerusalem. Symbols documenting Jerusalem show  the Aqsa Mosque, the Dome of the Rock, the grave of Adam and the Church of the Holy Sepulchre. An inscription at the last site mentions “Jesus, peace be upon him.”

Another favorite display in the exhibition, however, places me in the position of having to criticize the Metropolitan Museum design team. 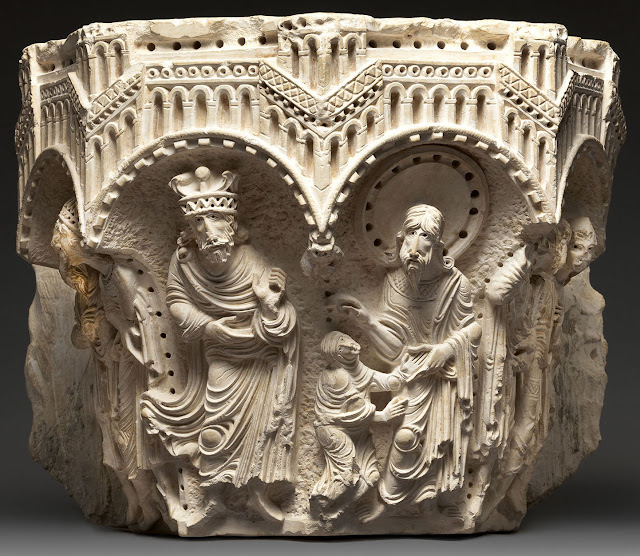 A group of stunning, carved capitals intended for the Church of the Annunciation in Nazareth were placed close to a documentary film screen. This placement really interfered with my study of these wondrous objects which had been buried to prevent their destruction by the soldiers of the Muslim army of Saladin in 1187.

I realize that museums have to experiment with innovative technology. But this continuous-loop documentary was unrelated to the extraordinary story of these architectural wonders. After listening and re-listening to the increasingly bothersome soundtrack, I had to cut short my study of these splendid works of art and move on - in a state of exasperation.

Fortunately, the final gallery of the exhibition concludes on a high note, with magnificent religious manuscripts on view, such as The Cloisters Apocalypse, illustrated above.

A related exhibition of photos of Jerusalem taken during the 1850's by the early photographer, Auguste Salzmann (French, 1824–1872), provides a brilliant counterpoint to the main exhibit. Here was Jerusalem, hundreds of years after the era of the Crusades, but still looking very much as it did during the time of Jacques de Vitry and Jean d'Aluye. 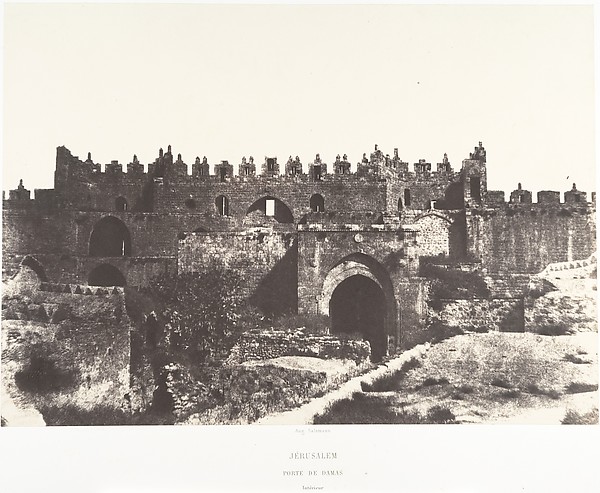 Jerusalem 1000–1400: Every People Under Heaven is a notable successor to such outstanding Metropolitan exhibits as The Glory of Byzantium (1997) and Byzantium: Faith and Power (2003). These were transformative explorations of the Medieval world, encompassing a richer and more nuanced view of the interlinked societies of Christianity, Judaism and Islam.

So too is Jerusalem 1000–1400: Every People Under Heaven, definitely worth a pilgrimage to Fifth Avenue and 82nd Street.

Posted by Art Eyewitness at 6:22 PM